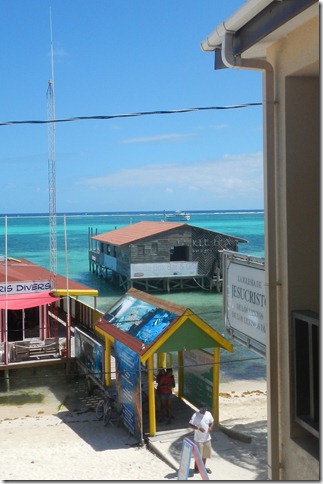 If you look closely you’ll see RCabin anchored in the water just above the shed like building.  This is the view from the balcony of the church building in San Pedro.  There has been a branch here for 12 years, and last year they purchased a small apartment building and somewhat renovated it for use as a church building.  It is located right downtown on the beach of San Pedro.  It is the closest we have ever anchored or docked to a church building.  Usually we have to travel much further, so this was a nice change.

The Church’s website states that the branch meets at 9:30am, but luckily on Thurs. we passed by the building and saw the missionaries and asked them.  They told us, it really starts at 9am.  We asked if they could come out to our boat for dinner, but missionary rules—No.  So we brought dinner for them and left on the doorstep knowing they would be back to the building for a meeting that evening.  They later told us they weren’t sure who it was from until they opened the foil and saw the green beans (still had that canned green bean look) on the plate and new that was a American food.

The branch is quite small but very friendly and welcoming. They mostly speak English, but have a few members that speak Spanish, so they translate the meeting from English to Spanish.  There were 4 other couples visiting as tourists and I think we were all hugged by each member of the branch.  The other couples all left after sacrament meeting.   Primary consisted of all the kids in one room together listening to a primary CD and singing together.  We had a small Sunday school class  where the 2nd half of lesson number 3 was taught. And then we split into relief society and priesthood.  There were 4 other sisters and myself for relief society.  One of the younger sisters said the relief society president didn’t make it today so we will need to figure out a lesson.  She then suggested we could read from the Book of Mormon, that is what they did last week.  One of the other sisters asked if I could give a lesson from memory.  I told them I would be happy to give a lesson as I had all the manuals on my phone for reference.  They thought that would be great.  I asked them if they were using the George Albert Smith manual, and one of the sisters said she thought so.  I asked if they might know what lesson number they were on and they didn’t know.  So I guessed based on where we had been when I last attended church in Mexico.  I quickly looked at lesson number 6 and saw it was on supporting our priesthood leaders and thought as a struggling branch it would be a good lesson.  There branch president is very young, I would guess in his 20’s and needs a lot of support I am sure.   I read from the quotes in the lesson and gave some of my thoughts and they all listened attentively.  Two of the sisters did not speak English, but said they understood a lot of English, so it was a quiet lesson.  I asked if any of them wanted to share any experiences of supporting their branch leadership.  And then the tears came.  One of the sisters was having a difficult time.  What I gathered was the branch president was new in the last year and making some changes that were hard for some of the members.  But the sister said “ I keep coming to church” and  I thought that was an important thing.  I don’t know all the background or what the situations are for them here, but I know that she loved the gospel and the church, so she keeps coming, despite the difficulties she has.  She keeps coming to church to worship her Savior and Heavenly Father.  Most of the people of Belize are very poor, minimum wage is about $1.00-2.00 USD, they don’t have much here.  Their homes, like in Mexico, are mere shacks or cement buildings they built themselves.  But these women, had great testimonies of the gospel, despite their circumstances or problems, they love the Book of Mormon and the Savior, and they have faith he will provide for them as they do their best to follow him.