This is the last place we stopped in Mexico.  It is an atoll off the coast of Mexico.  There are only 4 atolls on the Atlantic side of the Americas and this is one of them. It is also Marine Park and a protected area.  It is absolutely beautiful.  From the moment we entered thru the reef cut at the northwest end it is just breathtaking.  It is a very remote area, and usually day tour trips are run out to the atoll for fishing, diving, or snorkeling.  I was worried they wouldn’t let us stay overnight or at all b/c we had “officially” cleared out of Mexico.  Just before entering the reef we saw a large ship off in the distance.  Over the radio we heard a voice hailing “blanco yacht, blanco yacht”.  We had not seen another boat since we left Bahia Espirito hours earlier, so we guessed they were calling us.  We answered the call, giving our Boats name, RCabin, to identify ourselves. It was the Mexican Navy hailing us.  They spoke with us in English and asked who we were and where we were coming from and where we were going.  After answering all their questions and giving the name of our Capitain—David, they wished us a good day and journey. 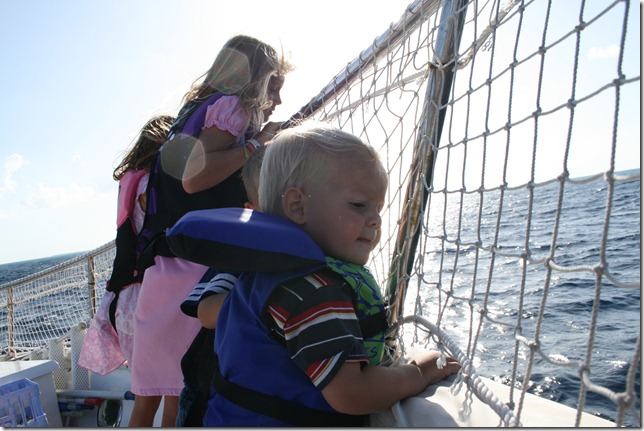 After we entered thru the reef at Banco Chinchorro, we saw a few mooring balls just north of the island, Cayo Norte.  They were a bit exposed to the east winds, so we headed further to the west of the island to anchor with the island blocking the wind and waves, but before anchoring we were chased down by a small boat and told to go back to the mooring balls.  We did not see where the boat came from; the island or the large navy ship off the reef, but we could see 3 Navy officers aboard the small boat, so we did as they asked and headed back to the mooring balls.  The small boat watched us tie up and then signaled to come along side.  We put out some fenders, and welcomed 2 of the Navy officers aboard.  They did not speak much English, but we were able to figure out what info they wanted.  They were very polite and did not even ask to come inside the boat.  They stayed on the back deck asking us to write down the answers to their questions—the same questions we answered last time they boarded us in Bahia Asencion.  They had 2 other men on the boat with them, as they did in Bahia Asencion.  We assume the boat owners.  One of them seemed to understand a bit of English and know about the park reserve.  We asked if we could move to the west side of the island and  anchhor.  He told us it was too shallow.  We asked if we could anchor where they first chased us down at in 2 meters of water, and he finally understood—we wanted to anchor and he told us “No Anchor”.  So we stayed on the mooring.  They left and headed into the dock on the island.  I watched to see if they would then head out to the ship outside or if they were staying on the island.  I was curious, because from what I had been told and had read, the park charges an entrance fee to visit there, but our visitors had not asked us to pay a fee.  No one came back to the boat to collect a fee. 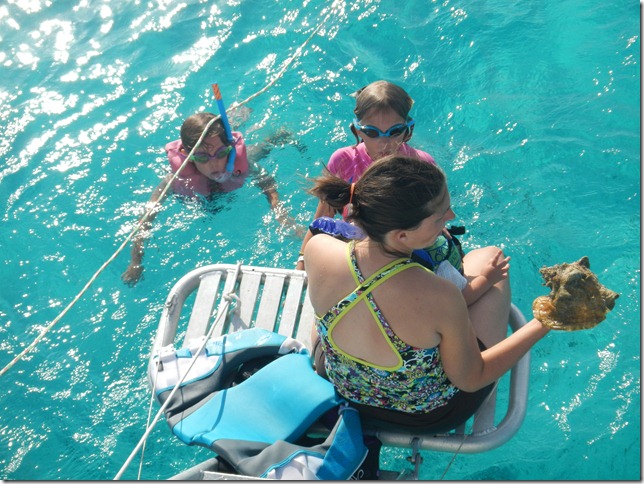 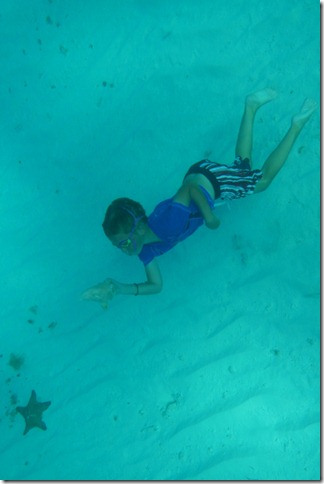 David wanted to try to fix our back stairs, that had gotten bent that morning as we left Bahia Espirito thru crashing waves to exit the reef.  It had been a long and rough trip to the beautiful Banco Chinchorro and I was ready to jump in the crystal turquoise waters.  He spent a bit if time straightening out the stairs so we could use them to get in and out of the water.  The kids and I grabbed our swim suits and headed to water.  82 degrees—perfect after a hot sunny day.  We swam around the boat in the sandy bottom turquoise water.  There were star fish all over, and many conch shells.  They had been cleaned of their inhabitants and thrown back in the water by other boats that must have been tied to the same mooring ball.  The kids were sad they did not find any live Conch.  It was a great swim.  Matthew wanted to get it too, but he and I just sat on our small swim platform and watched the kids swim.  Occasionally a wave would bounce up and splash our toes; Matthew loved it! 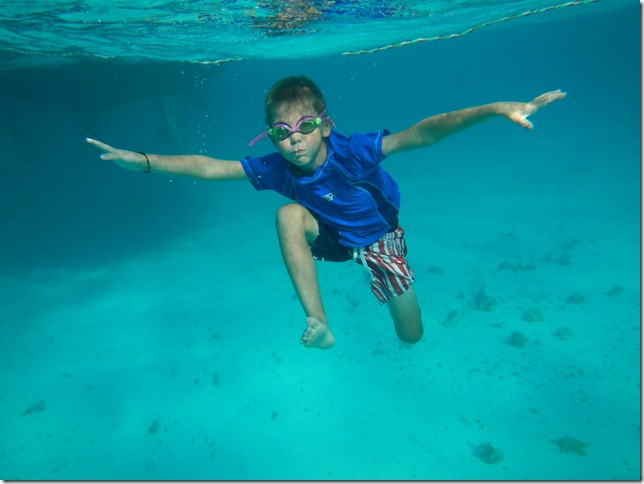 Originally we thought we spend an extra day there to explore the reef and island, but being tied up to the mooring ball left us exposed to the east waves making it over the reef, and caused the boat to rock back and forth more than we liked. Plus David had told the navy and park we were planning to leave in the morning.  So we decided to head on to Belize.  I definitely hope to go back, it was so beautiful.

In the morning we traveled 20 miles alongside the western edge of the atoll and reef.  If we stayed within 200 feet of the reef we picked up a great counter current that helped push our speeds to near 9knots.  It was great, since we expected to get 6 knots when we left the shelter of the atoll to cross westward to Belize.  Staying close to the atoll also gave us protection from the waves and allowed us a few hours of smooth sailing.  It was really nice compared to what we had traveled in the day before.  Early on we were greeted by a pod of dolphins.  They were fun to watch.  They swam with us for almost 30 mins zigzagging in front of our boat and jumping thru our bow wake.  The kids had a great time watching them off the bow. 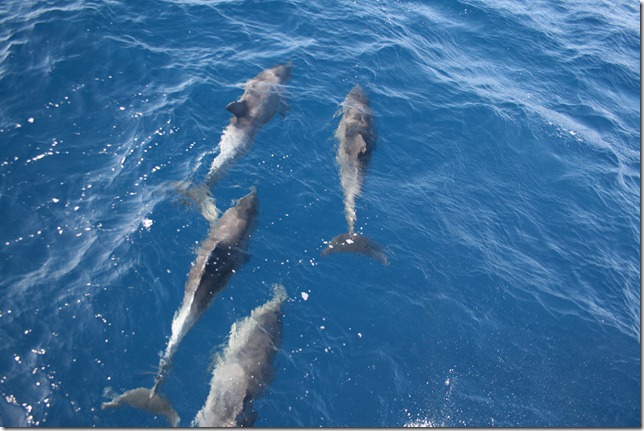