After leaving Puerto Aventuras early in the morning we headed south to Bahia Asuncion.  We thought it would take all day to get there.  We had planned for the opposing current to slow our speeds, but we made really good time.  The seas were not friendly though.  Poor Calvin and Matthew emptied their stomachs.  I soon put Matthew to bed and he slept through the rest of the trip.  This was the best option for him and me.  Then I didn’t have to worry about him.  Benjamin and the girls also did not feel well, but survived with their food staying in them.  We were grateful when we arrived at the beautiful bay hours early. 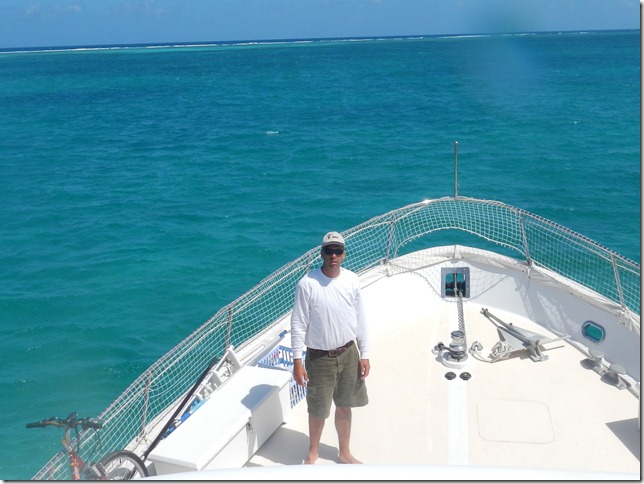 We anchored behind the reef.  We pulled in close trying to use the reef to calm the waves coming at us.  While it was calm compared to what we had been traveling in, it wasn’t still.  We still rolled a little, but it was very manageable.  We dropped the dinghy and went out exploring a bit.  The kids would hop off the dinghy in the shallow sandy areas and search for Conch.  We didn’t find any yet.  We then headed out to the reef to snorkel.  We had been watching the small local panga boats head out to the reef with tourists to go snorkeling, so we had to go check it out.  I wasn’t that impressed with it.  I thought the reef at puerto morelos was much healthier.  We still had fun swimming and exploring. 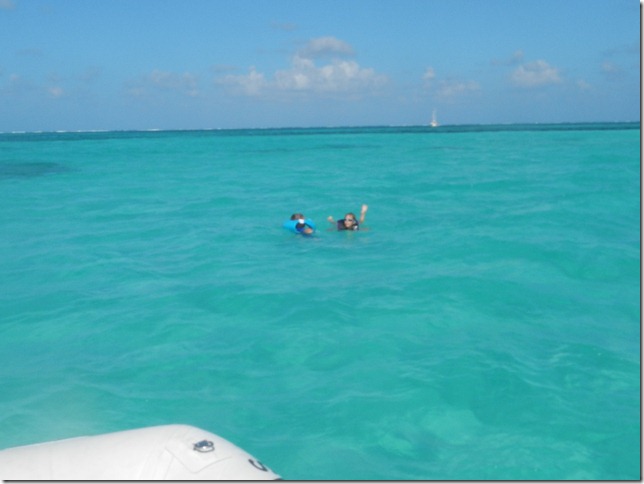 Once back in the dinghy we noticed that a boat had tied up to ours.  We had seen the same boat out at the only other boat anchored near us, they had also left Puerto Aventuras that morning, David had chatted with them the day before.  We drove our dinghy over to them on our way back to RCabin to confirm our suspicions that the Mexican Navy had approached our boats to check our papers and see who we were.  Sure enough the sailboat confirmed it was the Navy and they had only been at our boat for a few minutes.  We quickly headed over and found Suzie on the back deck with 2 officers of the Mexican Navy.  She said they were going to come back, but then they saw us coming so they waited.  They were very nice.  They did not speak English but he knew how to ask for the info he wanted.  He wrote down all our names and ages, even the kids. He asked to see our boat documentation and wrote down basic info about the boat.  It’s name, registered port, and size.  He asked where we were going and how long we were staying in Bahia Asuncion.   He asked if we had guns aboard or drugs.  Once satisfied with the info we gave, he asked to walk thru and inspect.  They did not go downstairs, but walked thru the main floor and the fly bridge.  He asked to see life jackets and our vhf radios.  Then they said their goodbyes and left.

In the morning we were ready to head out.  We made sure the kids had breakfast and dramamine 20 minutes before we left.  We only had 25 miles to the next bay south, Bahia Espirito, but wanted to be prepared for rough seas and big waves.  Thank goodness we prepared for it, because it was very rough.  The waves were like 8-12 feet, with all kinds of chop.  It was rough.  No one got sick, but the kids felt it.  We were glad it was only 3 hours of travel. 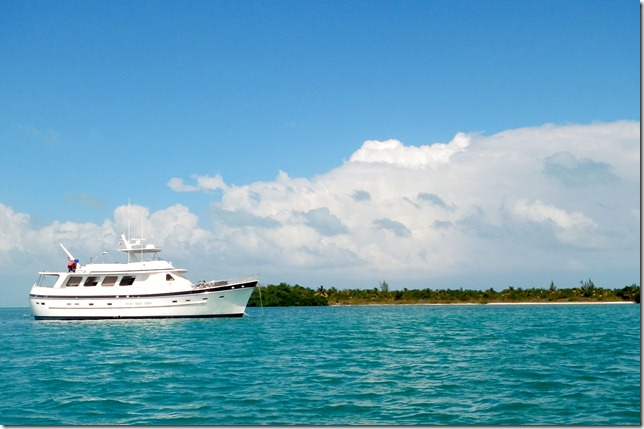 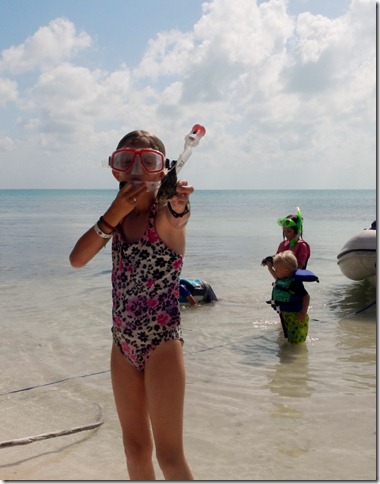 Once we entered the cut into the bay it calmed considerably.  With the reef behind us blocking most of the waves it was a smoother ride to the anchorage. Rather than anchor directly behind the reef like at Bahia Asuncion, we decided to head further in and anchor behind a little island. I drove us through the bay and slowed a bit as the depths got shallower and shallower.  Our charts do not show accurate depths in this part of the world, nor do they accurately mark where rocks and reef and land are located.  According to our charts we drove the boat over the reef to enter the bay.  Needless to say we rely A LOT on our eye site.  Shallow reef looks redish brown.  Sand, is gorgeous turquoise waters.  And grass is green or brown.  While we’d rather not touch the bottom, bumping against sand or grass is no big deal, but we definitely do not want to hit coral or rocks. 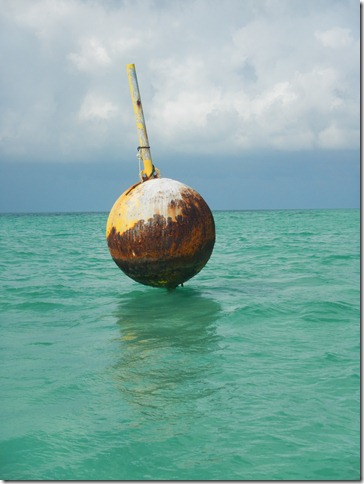 Based on the info we had and our eyes we were driving through a sand and grass area.  But it still made me nervous as we watched the depths say we were within inches of the bottom.  We made it through just fine.  Passing thru the area we saw 2 stingrays swimming out in front of the boat. We never would have seen them if it hadn’t been so shallow.

We found a great spot to anchor, with the little island blocking us from the wind and waves.  It was so calm and peaceful. It was wonderful after the rolly night and rough seas for 2 days.  The little island had a little beach for us to explore and play on.  The kids enjoyed snorkeling from the beach and shell collecting.  As we headed to the beach 2 dolphins were playing near our boat, so we circled around them in the dinghy to watch them play for a bit. 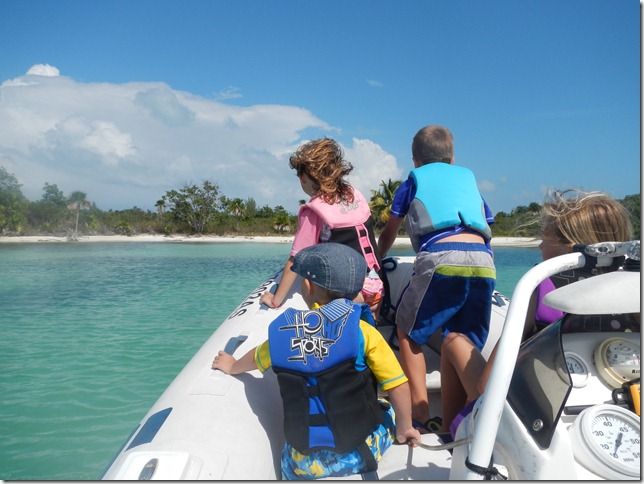 Another boat, a catamaran, came in and anchored a bit down from us.  As we drove by on our dinghy to a beach nearby he waved as the kids waved back.  David dropped us at the beach and went to say hello to our “neighbor”.  He was heading north, he is from Vermont, and was headed out fishing.  Later we found him fishing by the shore near our boat and invited him to dinner that night. Benjamin had told him his birthday was in 2 days, so Perk brought Benjamin and the other kids each a gift, foreign money.  It is always fun to look at the different coins and money from different countries.  The kids were thrilled with their gifts.  We had an enjoyable dinner and learned about his trip to from Honduras and thru Belize.  One of the best ways we learn about where we are headed is from talking with others who have been there.  I am by nature an info gatherer and researcher, and have been a bit frustrated with the lack of printed and internet info out there about the places we have been headed this trip.  We are grateful for those we meet that impart their experiences and knowledge with us. 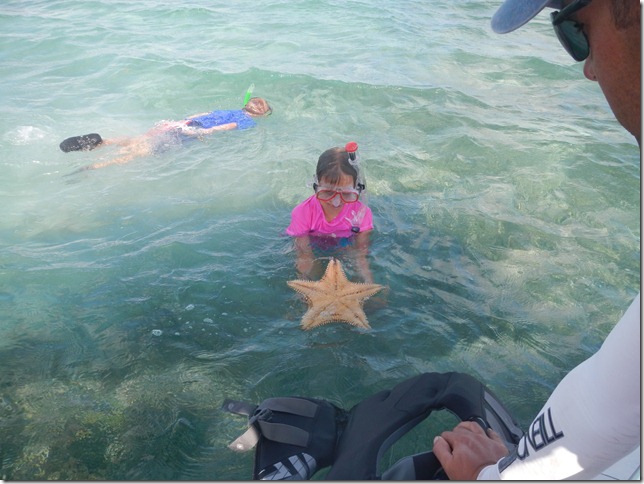 The anchorage was so nice we decided to spend an extra day there.  After the rough passages the last few days, I was happy for an extended break.  In the morning the kids worked on their school work and david worked on our broken generator with no success.  After lunch we set out to explore more of the area in the dinghy.  We’d stop so the kids could check out a sand/grass patch in search of Conch.  We had headed south of our anchorage and over to another little island where there was a fishing village.  About a dozen little house lined the shoreline.  They looked very empty now, as lobster season has ended.  I imagine the area is quite busy though during lobster season.  From here they ship lobster by the tons to the US. 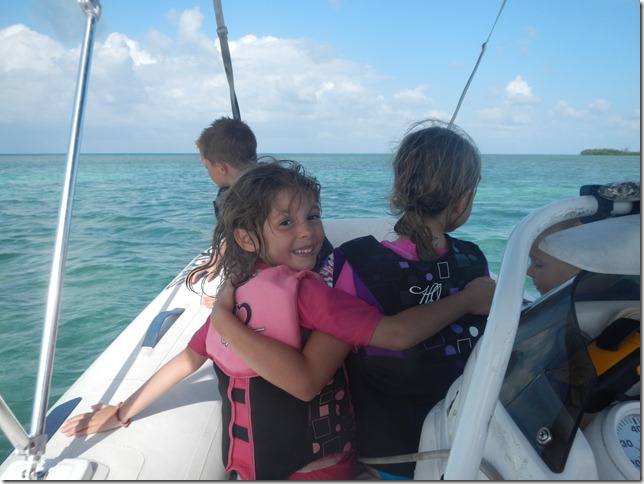 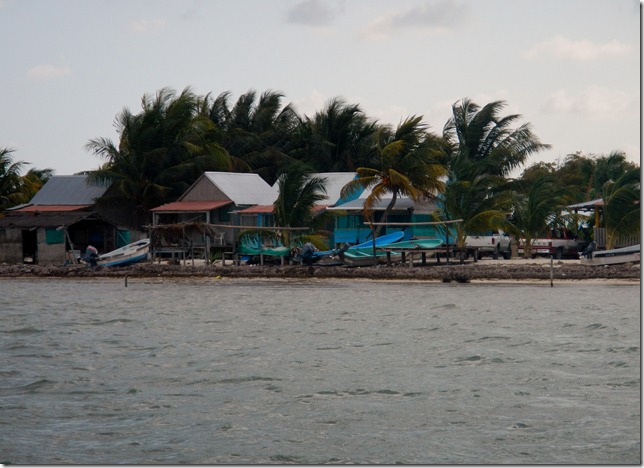 That evening we cleaned up the boat to prepare for a rough journey in the morning to Banco Chinchorro, 35 miles south.