One of the things we knew we had to do in San Pedro was snorkel out at the Hol Chan Marine Reserve.  I knew I wanted to go during the day and then also at night.  It is a national park and has protected status so the marine life is abundant there.  They constantly run tours out there, so it can get crowded.  This is where having out own boat aided us.  We had heard you need to go with a guide regardless, so we visited the Reserve office in San Pedro to find out for sure the rules.  #1 We can take our dinghy there—but it has to be registered with them.  For an annual fee of $10 USD we could register the dinghy.  #2 We would need to purchase park tickets—$10USD per day for anyone over the age of 12.  #3 You must go with a registered guide—this we had to find. 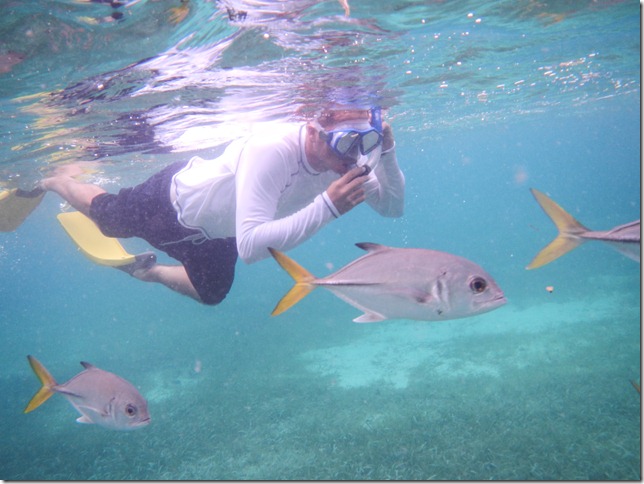 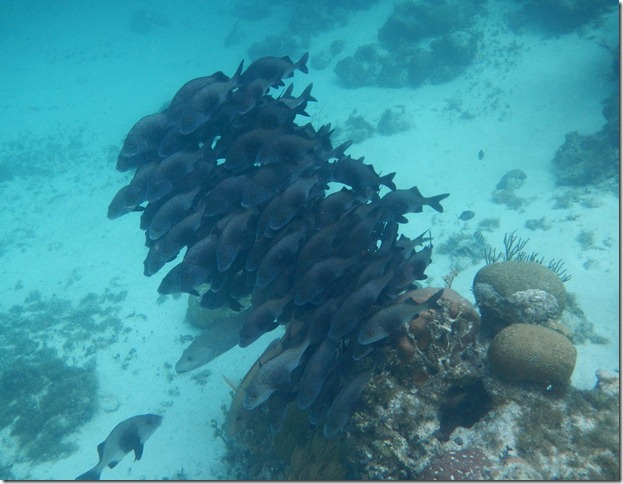 We checked with the dive shops, there’s a lot, but most do not hire out freelance guides, they require you to go on one of their “tours” at the low cost of $45 per person, kids 5-12 were half price.  This would also mean we would go with the crowds and a group and not get a personal tour on our own time.  We also wanted to go again at night, which would mean we would have to pay for a whole tour again, and the night snorkels cost a little more than the day time.  So we kept asking. 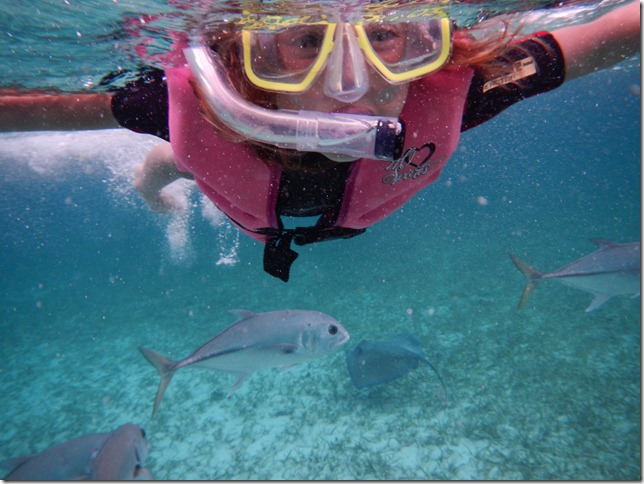 We decided to go with a shop, the name I can’t remember, but they scheduled a guide for us for the next day.  We planned to go between the regular tour groups at 12:30pm.  The tour groups go out in the morning and then again in the afternoon, so we were going to head out when they had just come back.  Sounded like a good plan.  And it was.  There were only 2 other small boats out there when we arrived.  Our tour guide, Gonzalo was great.  He checked us in with the park rangers—they sit in a boat waiting and watching for boats that come out to the area.  Then Gonzalo tied us up to a mooring ball and off into the water we went.  We had only brought Savannah, Calvin, and Isabel with us.  We left Suzie behind on the boat with Benjamin and Matthew.  He had brought some sardines with him to help entice some of the marine life out—like a moray eel.  They flow like ribbons in the water.  He showed us large schools of fish and knew all there names.  Yellow tailed jacks followed us everywhere we went.  They were 18inches long and traveled in large schools right beside us the whole way. We saw a sea turtle, large schools of several different kinds of snapper, grouper, angelfish, a couple of nurse sharks-one was little, the other close to 5 feet long.  It was great! 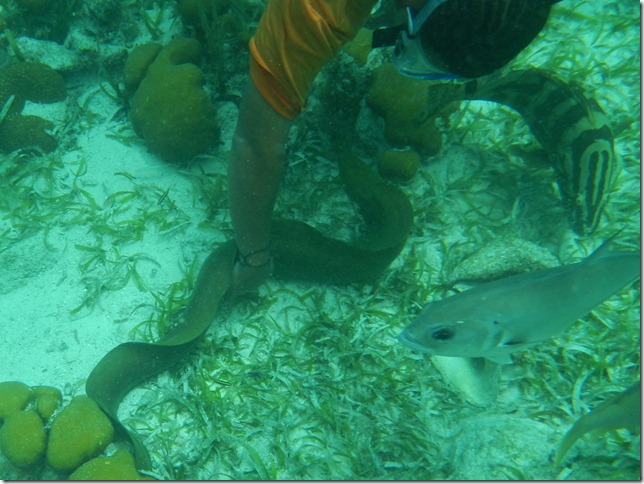 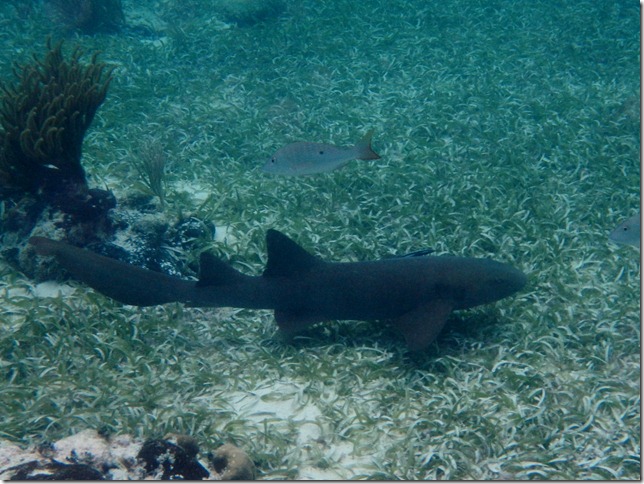 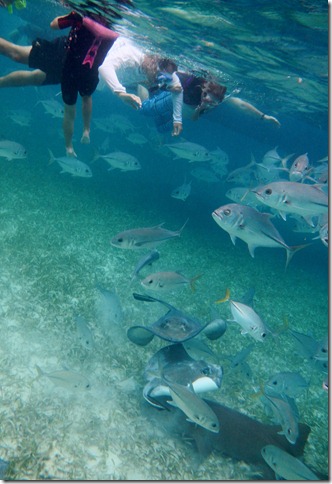 After we snorkeled on the reef for about an hour, we loaded back in the dinghy and headed a little further south to a spot in the reef where a decade or so ago fisherman used to clean their catch at.  Because of this the spot attracted nurse sharks and rays.  They gather as the boats pull up hoping for something yummy when they hear the engines coming. They call it shark ray alley.  We hoped right in, but the shy nurse sharks headed off a bit. The rays stuck around.  They must know more food was coming.  Gonzalo still had more sardines to feed them.  They were all different sizes and he held a few so the kids could touch them and see how they feel.  It looked to me like some of them had their stingers removed for safer handling.  Not all, but the ones he grabbed all had the stingers removed.  There were dozens of rays swimming around, they were so neat to watch.  About 20 mins later another boat pulled in and we watched the rays all gather nearby.  We followed Gonzalo over and hoped to see the sharks reappear.  Nurse sharks are quite shy.  After they tied up to a mooring ball their captain started tossing bait into some shells and tossing them over.  It was fun to watch the rays all gather in anticipation.  After a few minutes, a 5 foot nurse shark came swimming back and argued with a ray over the food in the shell.  Once the food was gone, the shark swam off again. 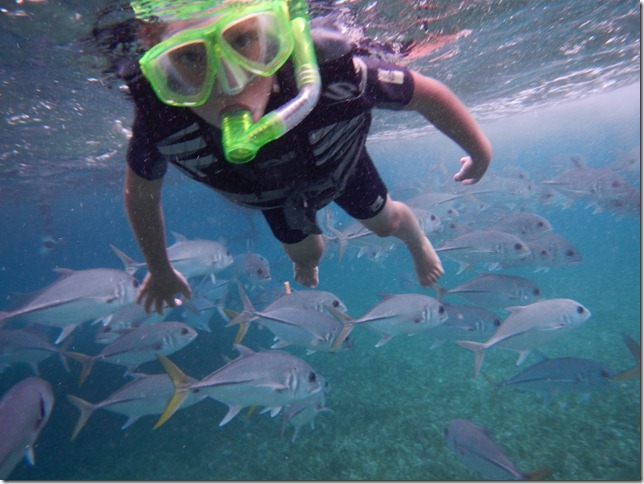 It was time to head back to the boat.  The wind had picked up and it looked like a storm might blow thru.  We headed back to shore, about 5 miles in the choppy water and made plans with Gonzalo to meet later at 5:30 pm to hopefully head back out for a night snorkel if the weather cleared up. 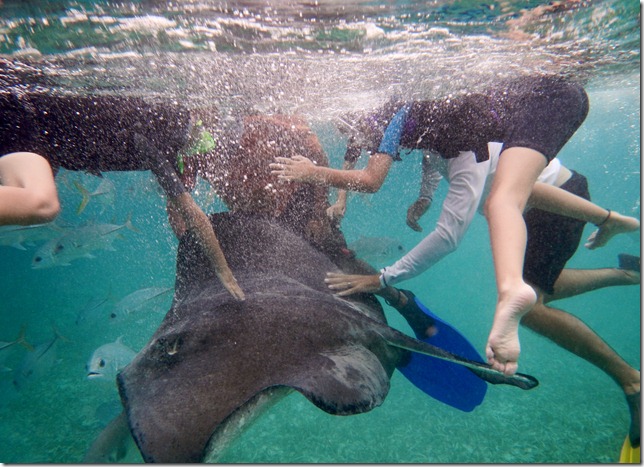 At 5:30pm we met up with Gonzalo at the dock.  He was a little apprehensive about going back out.  I think he had a long day, with a trip in the morning, us in the afternoon and now we wanted to go back out for night.  Luckily he was still willing to go.  The water had calmed and the sunset was spectacular with the clouds creating beautiful colors.  We stopped at a dive shop to rent some waterproof lights.  We had brought a few flashlights that we hoped would hold up in the water, but we weren’t sure, so it was better to rent a couple of lights that would work for sure.  We headed back out to the same spot we first went to and tied up to a mooring ball and waited till it got dark.  There were 2 other boats out there waiting as well, the both had divers in them.  about 20 mins later it was dark and time to hop in.  Gonzalo gave us some tips:

#1  If you see an octopus, keep your light shining on it or it will quickly hide and camouflage itself.  I had no idea octopus could change colors to blend in to their surroundings, but when we first saw one you could hardly tell what was rock and what was octopus.  Once the divers had all moved away from it and we had swam just a bit away, the octopus felt safe to move on.  Gonzalo’s noticed it moving and put his light on it and we got to watch it move along the grass and sand.  It was very cool. 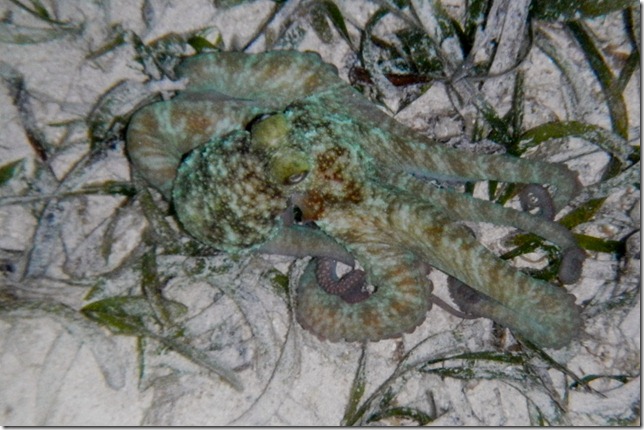 #2 If you see a barracuda, don’t shine your light in its eyes or it will charge.  Move your light away from it or turn your light off.  We didn’t see any, so no problem there.

#3 When the worms start to bother you turn  your light off or swim near the coral.  There were blood worms everywhere.  They are like little flies that swarm to your flashlight.  There would be thousands of them around us and you could feel them on your skin or swimming down your swim suit.  They don’t bite but they are creepy feeling.  The coral feeds off of them and sucks them in when they get close.  And if you turn off your light they swim away.  But they come back after a bit when you turn your light on.

#4 If you see an eel and there is a fish nearby, shine your light on the fish and the eel will eat the fish.  This took a bit of coaxing.  We saw 2 eels out of their rock houses swimming around we had to flicker the light for a bit on the fish to get the eel to turn to the fish to eat.  It was neat to watch the eels swim, they look like ribbons flowing in the wind, waving. 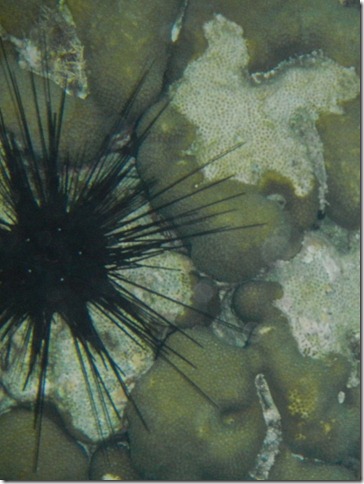 We also saw tons of spiny sea urchins.  I had never noticed them before, because they  hide under the rocks during the day and come out at night to eat.  It was neat to see them everywhere.  The rays were mostly resting for the night, we could see them buried in the sand. We also saw 3 lobsters on the move looking for dinner. The divers were about 10 feet below us and at one point we swam over them and they were shining their lights on this huge black grouper.  He was at least 3 feet long and 2 feet tall.  He was big. We also saw another octopus, but he quickly hid under a rock when we approached him.  All the big schools of fish were gone, but a few different fish were out that we hadn’t seen earlier in the day.  It was great.  I am so glad we did the night snorkel and am excited to go again in other areas, it was fun to see the marine life that hides during the day and only ventures out at night.

Including the cost of the waterproof flashlight rental, and an extra tip for our guide Gonzalo because he was great, we paid for the guide service $130.  So adding in the other costs it was a total of $160 USD for 2 trips of snorkeling.  It cost us half price of what we would have spent had we paid for the tours, plus the benefits of going when we wanted—with out the crowds and a private tour guide just for our little group.  It was a great experience.  These 2 trips are the best snorkeling we have ever done and well worth the cost of a tour.