We finally decided it was time to head south.  We had been waiting out a Northern front that had passed thru and kicked up the winds for a few days.  Once that passed we just had to wait for the wind and waves to settle.  They were finally calming, so we decided we would head 30 miles south to the marina at Puerto Aventura.  We decided we would not stop at Cozumel this trip, we were worried the anchorage would be too rough.  So we decided to clear out of Mexico at Puerto Morelos.  Puerto Aventura is more expensive and a little tougher to clear out of b/c immigration has to come on the ferry to Cozumel.  We were told we could still stop at the Marina in Puerto Aventuras and stay the night even though we have officially “left” Mexico—according to our paperwork.  We will actually stop multiple times before leaving Mexico as we still have over 100 miles against the current to travel.  There are some lovely rural bays on the way south to anchor in for the night and to explore. 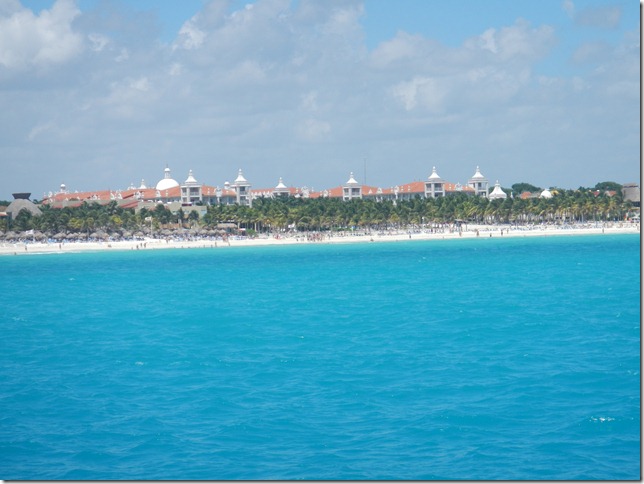 As we traveled south, the scenery was beautiful. Lots of beaches and resorts all along the coast.  We stayed close to land to stay out of the current moving north to keep our speeds up.  Although Cozumel was still 15-20 miles across the sea we could a few cruise ships in the distance that were either anchored or docked at Cozumel.  As we were passing near Playa del Carmen, a small fishing boat started waving to us.  I was driving and thought maybe he had divers down in the water so I steered a little further away, but he continued to wave his arms and point at the water.  As we looked on we could see a large shape in the water next to his boat.  The guy was holding up his arms to signal huge and pointing at the water, so we clued in—he was trying to tell us there was something huge in the water.  A Whale or Shark?  We drove the boat over to where he was to get a better view. 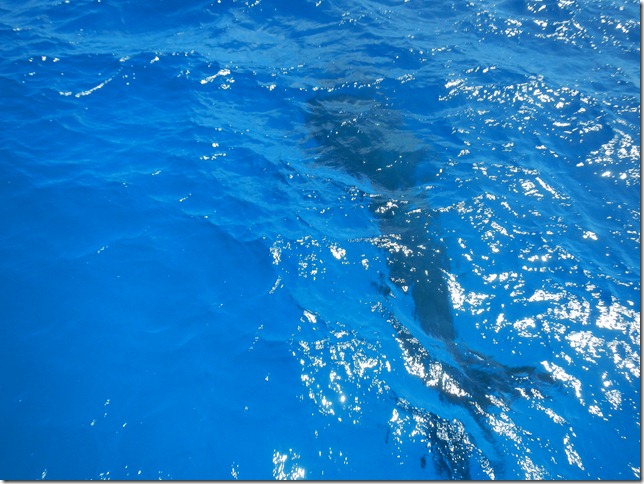 We could see the top fin ands and tail fin and decided it was definitely a shark.  It never surfaced, and it is hard to tell just how deep it was, but at least 6 feet below, if not more.  David took over driving so he could steer us closer and we all went up to the bow to get the best view.  David got us very close, so close the shark swam off just before we drove over it.  We think it was a whale shark, which are come in Mexico, and get very large.  The shark we saw was at least 15 feet long.  Whale sharks can get to over 20 feet.  They are very docile sharks, so calm that you can swim with them and touch them, but we weren’t jumping in to find out. 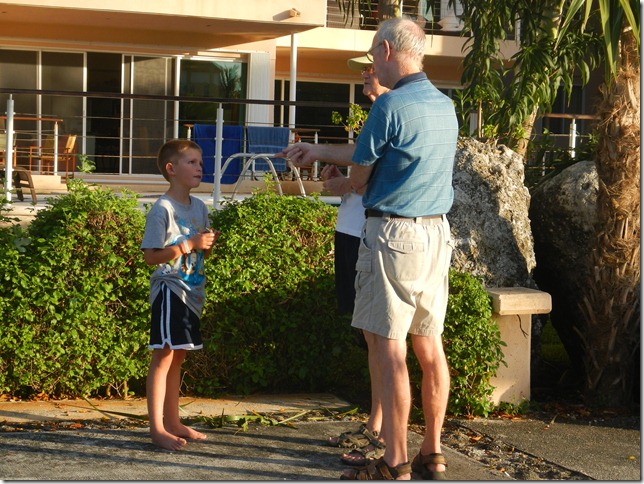 We continued on to Puerto Aventuras, which had a rocky jetty on each side of its entrance.  It is quite narrow and made David grateful the waves and wind weren’t any worse as we didn’t want to get pushed into either side.  We tied up along their wall in a tight space between a catamaran and a sailboat.  After a quick wash down of the outside of the boat, Calvin quickly gathered some palm leaves and set about making caterpillars.  He became a business man and asked every passerby if they wanted to buy one—only $1dollar each.  This marina is a large basin with surrounding condos, hotels and shops.  In a little over an hour he had sold 3 grillos.  After dinner we made him close up shop so we could all go for a walk.  We stopped at a little restaurant and shared a few pieces of pie before heading back to the boat.  We had an early morning to get ready for.