We finally made it to Belize!!!!!  Belize has been on my list of places to go for the past decade.  The thought of beautiful sandy deserted beaches and awesome snorkeling waiting for us just makes me happy.  It was a long day of travel, and after the past 3 passages we had made, I was not looking forward to the long day; however, we were blessed with a beautiful day and great seas.  We left Mexico’s Banco Chinchorro and stayed close to the reef outside the atoll.  A took a picture of our GPS showing just how close we were…according to our charts(which are pretty much non existent) we were on top of the reef.  From using our eyes, we stayed within 200 yards of the reef. 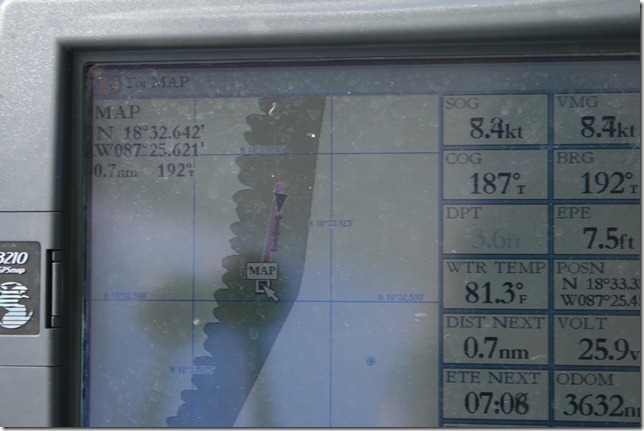 Travelling close to the atoll we found a great counter current that helped boost our speeds, we tried going further out but were slowed down significantly by the gulf current heading north-the opposite direction from us.  Near the end of the atoll it was time to set a more southwest course to Belize.  We were nervous that the seas would get rougher, but it was a beautiful calm day. We were celebrating Benjamin’s birthday, so it must have been a gift to him!

Our speeds stayed up too, which aided us in arriving earlier than we thought.  This was a good thing, because as the soon goes down, it is harder to see what is in the water and the passage thru the reef outside Belize is something we needed sun to see.  Our back up plan if needed was to call a local dive shop to ask for a pilot boat to guide us in thru the cut.  Since we arrived early, and the weather was fairly calm, we maneuvered thru the reef ourselves.  We made it in safely and anchored near the San Pedro city dock.  Because it was near 4pm we decided to wait to clear in with customs and immigration until the morning so we could spend more time celebrating Benjamin’s Birthday.

In the morning David gathered the paperwork and passports and boat documentation and headed into town to the customs and immigration office.  He first went to the location I had read in one of our boat guides but the office had moved 2 years ago, luckily he found someone who pointed him in the right direction of the new office.  The town is not very big which makes walking around very easy, although there is quite a bit of traffic on the small streets with no sidewalks, so with the kids it makes me a little nervous.  But we were still on the boat at this point, as David made his way to clear us in.

He was gone near 2 hours.  During that time he arrived at the correct location and was given a lot of paperwork to fill out, including visa’s.  Once he got everything filled out he met with 4 different departments- Immigration, Customs, Agriculture, and Port Authority.  The Port Captain mentioned that they heard us calling on the radio when we arrived yesterday to notify them.  David asked why they hadn’t answered our radio call, and they said they did, but their radio antenna is tipped over, so maybe we didn’t hear them—we didn’t.

David had noticed while filling out his paperwork that they had cases and cases of soda that had been confiscated from travellers in their office.  After we lost all our fruits and veggies in Mexico, we had discussed making sure when clearing in that we clearly claimed everything on board as ship’s stores, meaning it would be only consumed on board.  Another boat cruiser had told me she hides most of her veggies and fruits when they clear in to Mexico and only leaves a bit out for them to take.   When he visited with the agriculture officer David went over this again, all food on board is ship’s stores.  He had filled out their form and marked that we had meats, fruits, and vegetables on board, as the form stated.  But the agricultural officer refilled out a new form that showed we had nothing on board and asked David to sign it and then told him their would be a $20 fee that we would not get a receipt for.  hmmm…  As a final total with customs, Immigration, agriculture, and port authority we paid less to enter Belize then we did to enter Mexico. 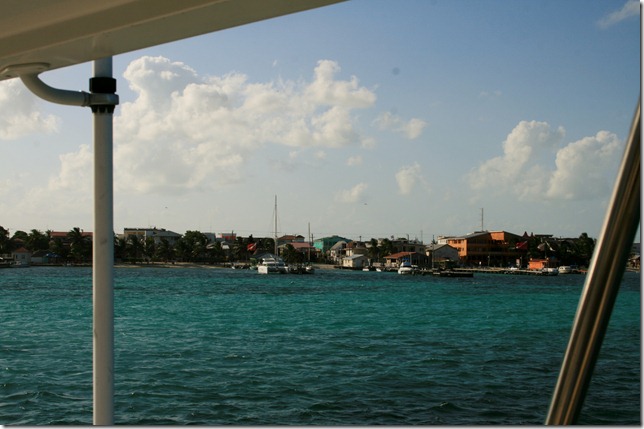 I was sitting on the back deck reading with Benjamin and looking for when David might come back.  Sometimes it is hard without a cellphone, sometimes our modern lifestyle makes it hard to go back to “the old ways”.   I was wishing I could send him a text asking him how much longer he might be, or how it was going.  I looked over to the dock where he had tied up our dinghy to go ashore, and saw a golf cart pull up and stop at our dinghy.  I could see 3-4 people hovering around where our dinghy was, and they looked sort of official. I started to worry that we weren’t suppose to leave our dinghy there, or that it might get stolen.   We we were anchored about 200 yards away so it was hard to tell exactly what was going on.  I hollered to Calvin to run up to the fly bridge and get the binoculars so I could see what was going on.

With the binoculars I could see David in the Dinghy with 3 other men, they were starting to head our way.  I wasn’t expecting them to come and board us, as we had read and heard from others that they usually did not board vessels in Belize when you clear in.  Suzie asked if we should hide some of our fruits and veggies.  So we grabbed a few of them, a big bag of carrots, a few onions, peppers, apples and oranges and put them behind the dinette cushion in a hidden cubby.  I was thinking, if they find them, will it look odd or normal?  I didn’t want to lie to them.   But I think the space could pass for a cool dark storage spot for veggies and fruits.  We cleaned up a little as the little ones had strewn toys all about that morning.  We only had a few minutes and David was tying up to the boat and climbing aboard with our guests.  As David showed them around I heard him remind them that everything on board was “ship’s stores” .  They looked far more closely and thoroughly then in Mexico, which was surprising to me.  They opened many of our cabinets and asked for the baby proofed cupboards to be opened.  They thoroughly looked thru the fridges and freezer in the kitchen.  They also asked to look in the storage under the dinette—near our hidden stash, but David, without knowing lifted the cushion just right so that they good see under the dinette, but not behind it, where we hid our veggies and fruits.  They looked down below in the staterooms, but never asked to go up to the fly bridge and David didn’t offer, as we have 2 freezers up there stocked full.  And then they were done.  They didn’t take anything with them, so I guess the fees worked.  David drove them back to shore.

When David came back, we had lunch and then headed into town.  It is a relatively small town, with 3 main roads and lots of cross roads.  The 3 main roads are Front, Middle, and Back.  Along each street are many shops, little quick marts, bakeries, tour shops, dive shops, and lots of small restaurants.  After passing thru Mexico I thought Belize would still feel very Latin American, but it seems much more Caribbean and island like.  It was different than we expected.  Most cars on the island are taxi vans, otherwise people drive a lot of golf carts.  The roads are narrow and sandy.

Our first stop was the Hol Chan Marine Reserve office to inquire about snorkeling in the Hol Chan Reserve Park.  They informed us that we would need to register our dinghy with them to take it out there and we would need to buy park tickets for ages 12 and up, and we would need to have a registered guide go with us.  Getting a guide was the tricky part.  We asked if they could refer someone and they sent us to a shop down the street and said to ask for a “freelance guide”  We stopped at many shops now that we knew to ask for a “freelance guide”.  Some required you go with them in their boats for the cost of $45 per person (half price for the kids).  Other shops did have “freelance guides” but couldn’t commit to going with us tomorrow.  But shopping around gave us an idea on the right price to pay for the guide.  We wanted to go out twice.  Once midday, and then again at night in the dark.  (More on this in a separate post)

The kids were getting hot and tired, and still had school work and chores to finish up on the boat.  Also it was time for Matthew to take a nap.  So we dropped the kids and Suzie back at the boat, and David and I returned to San Pedro to continue our stroll around town.  We wanted to head to one of the larger grocery stores.  I had read there was a big one on the south end of town.  We headed out there, and it was large and nice, and no one was shopping there.  I checked out the prices and knew why no one was there, no one could afford to shop there.  I wasn’t looking to buy ice cream, but they wanted $17 USD for a half gallon of ice cream.  1 quart of Peanut Butter was $20 USD.  We were mainly looking for more fresh fruits and veggies and eggs.  Their selection of fruits and veggies was very small and not very fresh.  I opted to not buy any groceries there.  We picked up a couple bottles of local juice—sour sop and tamarind, to try and a Belizean chocolate bar.  It was time to head back to the boat and figure out our plan for the next day.