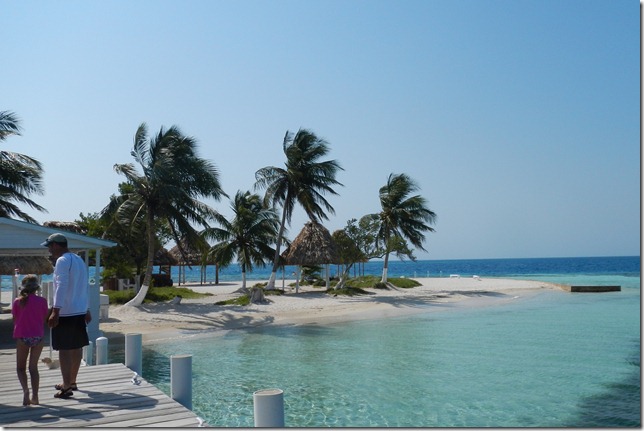 A little piece of paradise.  We anchored the day before about 2.5 miles away from this little island of sand and palm trees, behind a much large Island, Middle Long Caye for protection from waves and wind.  In the morning we loaded up the kids and headed to Rendezvous Caye in the dinghy.  Our not so accurate guide book said this was a beautiful sand and palm island—this was true, but the book also said it was deserted and rarely visited—this was false.  For the last 7 years it has been developed by an American Judge as an excursion destination for cruise shippers and tourists visiting Belize.  They had several shade palapas and picnic tables, even had bathrooms, and of course a small dock to tie up to. 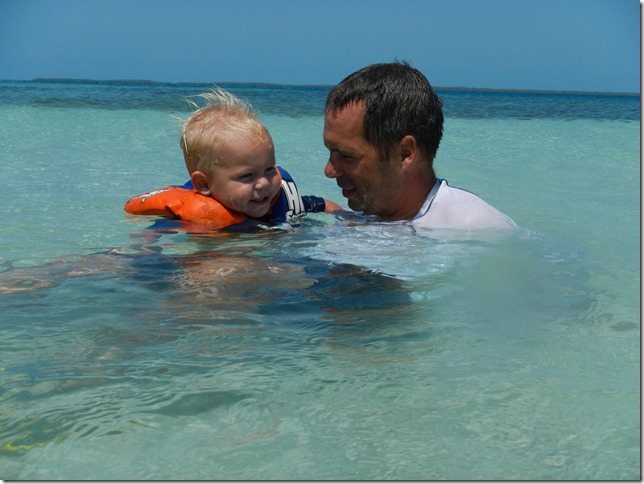 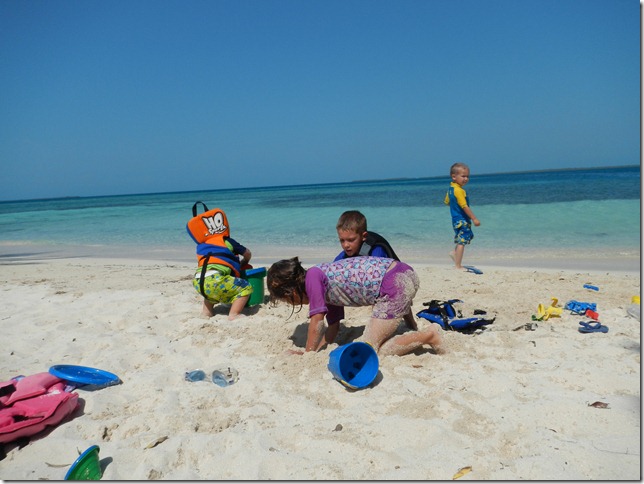 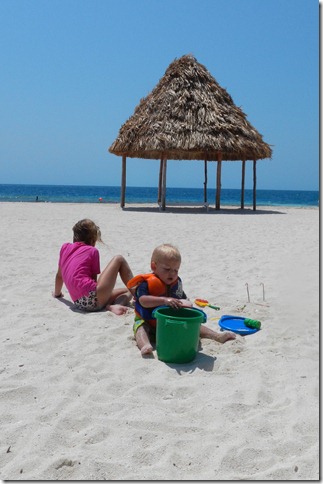 We arrived around 9am as a tour group on a sailboat was leaving.  They had camped overnight on the island and were headed to a new Island today.  There was no cruise ship scheduled for today, or any other tourist excursion groups, so we had the place to ourselves, except for the caretaker Mike.  He was a friendly guy who welcomed us to shore and told us to enjoy ourselves.  He even took us out snorkeling on the reef around the island. While snorkeling I was able to identify some plants and things that we had learned about the day before at the aquarium.  Mike found 4 Conch shells while snorkeling for us to take with us.   The kids were thrilled!  They had been looking for Conch everywhere we went, and were sad when we would find it in a protected park, and disappointed when we wouldn’t find it.  This was a real treat for them as Mike gave us for Conch shells to take.  He told us they will live in their shells on land for 3 days.  So we didn’t have to cook them tonight.  The kids enjoyed watching the snails inside peek out wondering where they were as they were no longer at the bottom of the sea. 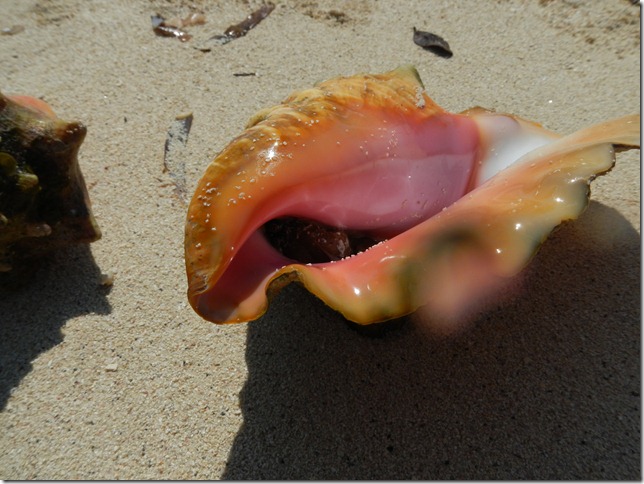 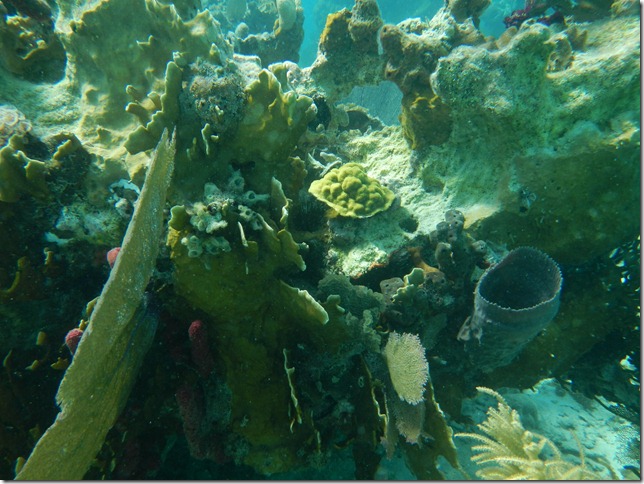 Mike told us that when the cruise ships come in he takes out a glass bottom ferry boat to tender the passengers over in.  He lives out on the water in one of the boats so he can keep an eye on the island and the boats.  We told us we should have pulled RCabin around Middle Long Caye and anchored closer to Rendezvous so we could keep an eye on it.  We told him we weren’t sure how the wind and waves would be or how much coral there would be to dodge, so we decided to leave it where it was protected and safe. 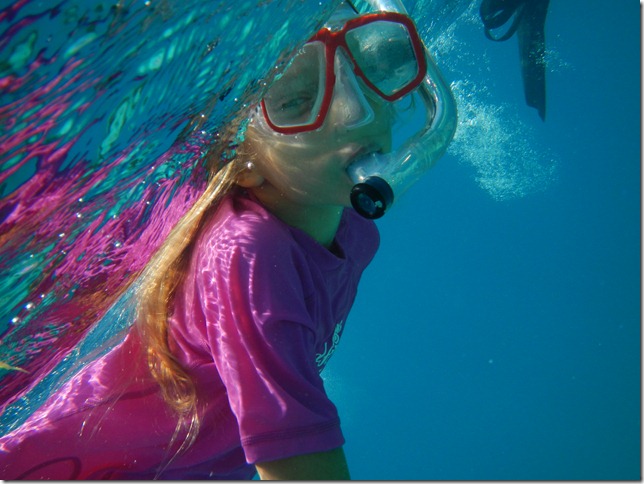 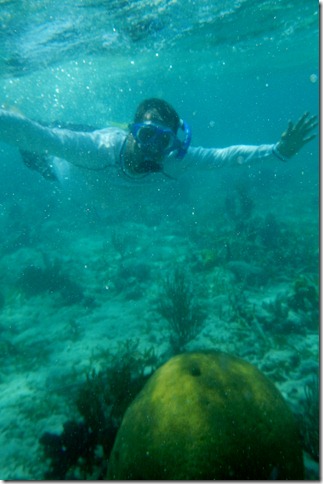 We had a great time playing on the beach and in the crystal clear waters.  After a couple of hours it was time to go and nobody wanted to leave.  Who would want to leave such a beautiful place, but we were planning to head to another beautiful place and needed to get there before the sun went down.  Just before leaving David made a quick trip back to the boat and back to us so we could give Mike a tip for allowing us to come ashore and taking us snorkeling.  We hadn’t brought any cash with us because we expected the island to be deserted.  The kids were sad to leave, they had a fabulous time! 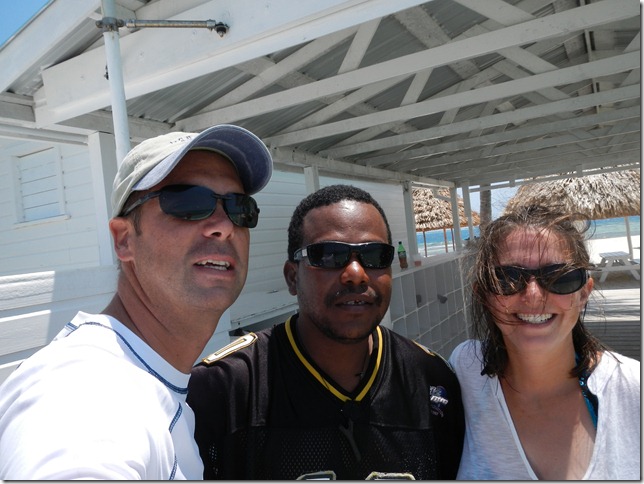