We had been counting down the days to Benjamin’s Birthday.  He was very excited to turn 4!  I had used the date on my watch for the countdown, but apparently my watch did not take leap day into account.  We woke up the morning we thought was Benjamin’s Birthday and Savannah made him a special french toast breakfast.  He was so happy it was finally his Birthday.  We spent the day travelling from Mexico to Belize, the sun was shining, the water was calm, it was a nice day to celebrate.  Around lunch time, David was on his computer and said, today is only the 14th.  I checked my watch—it said the 15th.  He checked the calendar, and sure enough—the 14th!.  Well Benjamin was too happy enjoying his birthday so we didn’t want to ruin his fun.  So we carried on with the birthday celebration, even though a day early.   We arrived in San Pedro, Belize just before 4pm.  We decided to wait to clear into the country till the morning so we could spend more time celebrating with Benjamin.  We still had to finish making his cake. 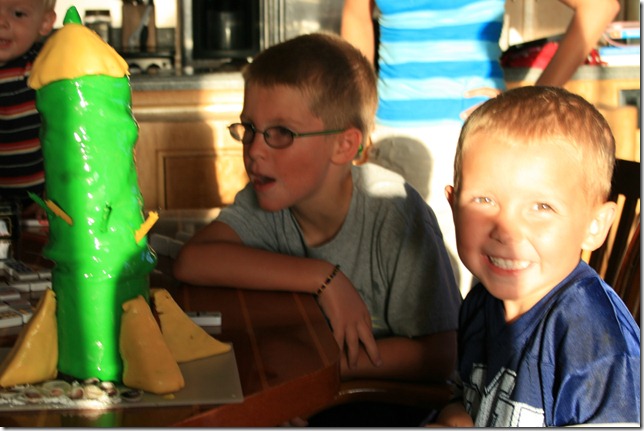 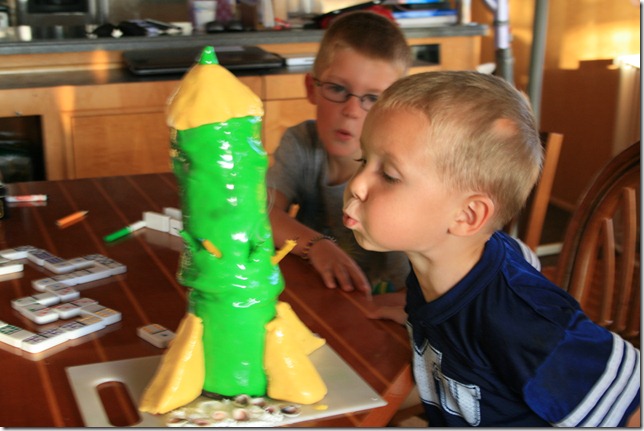 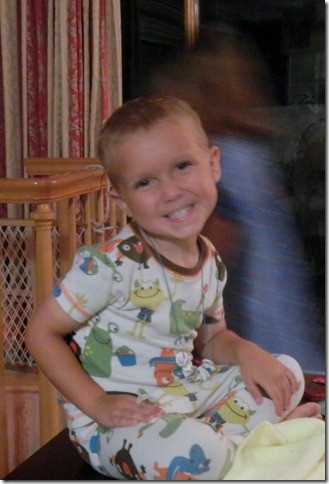 Benjamin had told us a few weeks ago that he wanted a rocket cake.  The funny thing is, when Calvin turned 4, that is the same cake he wanted—a rocket.  I had baked the cake and put it in the freezer the night before, so that afternoon all we had to do was color the fondant and assemble.  We knew from making it for Calvin, that it wouldn’t stay standing long.  So we had cake first, then a special dinner after.  Benjamin loved his rocket cake.  It was blasting off from the beach with sand and shells around it—shells Benjamin had found at the beach a few days before, just for his cake.

Following cake was a special dinner request by Benjamin—hotdogs and mac N cheese.  When I asked what vegetable he wanted he picked broccoli and ate them all first.  I didn’t know he liked broccoli so much.

Celebrating a birthday on a boat while traveling thru remote areas makes for creative gifts and wrapping.  We don’t have any wrapping paper on board, but that didn’t phase the kids at all.  They didn’t even ask for any, they just came up with their own ways to wrap their presents on their 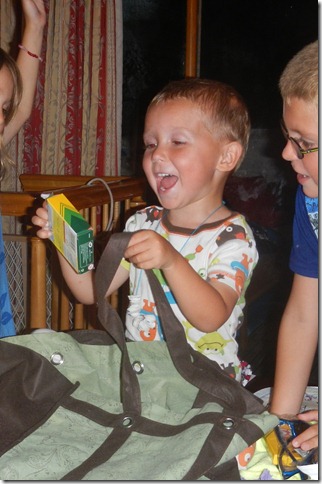 own.  Calvin used a small blanket he has to wrap his gift of a homemade book made just for Benjamin.  Savannah made a little paper envelope for some paper frogs she made for Benjamin.  She also spoiled him with breakfast and made him a tent over his bed to sleep in.  Isabel used a small piece of purple tissue paper she had saved from a gift she had recently received to wrap her present—a homemade shell necklace from shells she had recently collected.  I put the gifts from David and I in a canvas bag we have on board.  He loved his new markers, crayons, glue stick, new sun glasses, and a balloon to learn to blow up and play with.  When Grandma Sanna visited at Christmas she left a gift with Suzie to give Benjamin—a lightning McQueen notebook—which he choose to use as a journal for school.  He is very excited to have a journal to write in- just like the big kids!  And Suzie gave him some caramel candies that he loves.  He loved his party and gifts.

Benjamin is a fun kid.  He is always full of smiles.  He has a great imagination and loves playing pretend with his siblings.  He has learned to read this year and is learning to write sentences. He is great at counting and is learning to add and subtract. He has an excellent memory, which has aided him in learning to read so easily. He loves green and yellow and blue, but these favorite colors change almost every week.  He wants` to have hotdogs every night for dinner, and is often disappointed when we don’t.  He is a great swimmer and is learning to snorkel.  He is a great big brother to Matthew and is excited for a new little brother too.  We are so glad he is is a part of our family.  He has such a sweet spirit and is a blessing to be around. 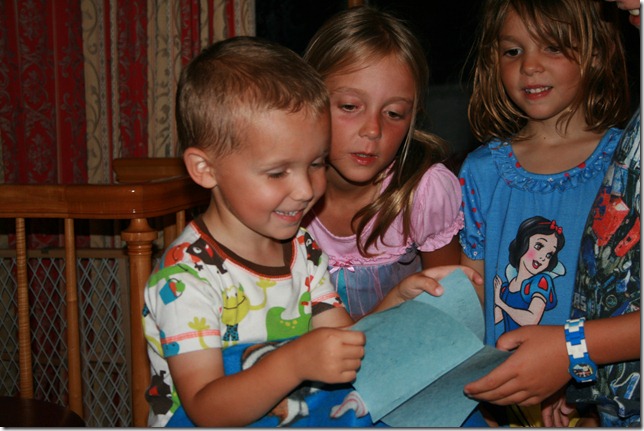