After Church on Sunday we pulled up the anchor and headed south 12 miles to Caye Caulker.  While we were in San Pedro 2 or 3 other boats had joined us in the anchorage, but that was it.  I thought we would see at least a dozen other boats for the size of town.  When we arrived at Caye Caulker I was glad to see 6 other boats anchored.  One of them was a a boat we had seen in Mexico and also in San Pedro.  The Banana Catamaran.  In San Pedro we talked with them a few times and mentioned we had seen them in Isla Mujeres. They have a big banana painted on the side of the boat along with their name.  Every time we pass them in the dinghy our kids would chant B-A-N-A-N-A!  over and over.  They are french, but live in South Africa, where there boat was built.  They sailed it here from South Africa and are headed to Panama.  They had left San Pedro the day before us and had told us they were headed to Caye Caulker, so we weren’t surprised to see them, but were surprised to see the other 5 boats.  Most were Catamaran’s, which seems to be the preference of boats here in Belize.  A couple were monohulls, all sail, no other power boats like us.

It was a nice calm anchorage in the lee of the Island.  We went for a short walk in town after arriving.  It is much smaller than San Pedro, the 3 streets were all hard packed sand streets.  It has a more laid back feel, much less crowded, but still had a decent amount of shops and activities for tourists.  We stopped to watch a local’s soccer game.  They were young adults in uniforms playing a great game.  During half time Savannah and Calvin headed onto the field with some other local kids to play for a bit.

In the morning we took Benjamin in for his Birthday Breakfast with Mom and Dad.  We went to a little local shop for eggs and homemade cinnamon rolls.  He loved being with just Mom and Dad!  At lunch time we took all the kids in for a local lunch.  By the time we got ashore, the shop we had gone to for breakfast was sold out for lunch, so we headed a little further down the street to another local eatery called Syd’s, we enjoyed Garnaches for lunch.  They are tostadas with beans, cheese, onions, and cabbage on them.  We ordered a few with chicken too.  They are simple, yummy, and super cheap.  Lunch to feed all 8 of us full cost $20 BZ including tip, that’s $10US. 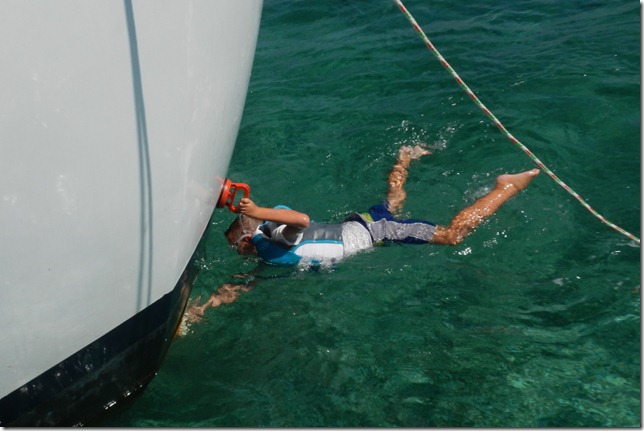 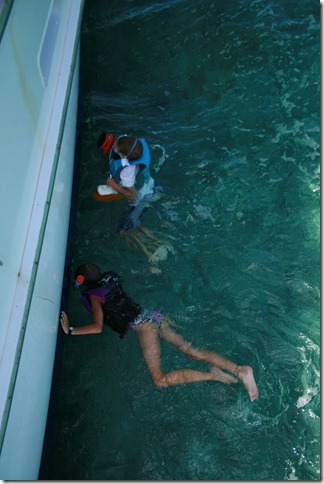 That afternoon the kids swam for a bit off of the boat and tried to scrub our waterline which is attracting algae.  They have been looking for ways to earn spending money, so we have put them to work cleaning the outside of the boat, which needs a good scrub often b/c of all the salt water.  David and I reviewed the maps trying to decide where we should go and what we should do, trying to plan out our remaining time.  We planned to head south in the morning.