This was our last visit to a town in Belize.  We arrived on a Saturday morning and decided to wait till Monday to visit customs and Immigration to clear out of Belize.  There were about a dozen boats anchored here over the weekend.  After talking with a few of them they were using this anchorage as a base since the robberies on board the catamaran occurred.  Here they were meeting up to make plans to travel together or “buddy boat” around the islands.  David enjoyed chatting with a few of the boaters and picking up info about the clearing out process here.  We were trying to anticipate the cost to clear out but it turned out to be easier and less money than we thought. 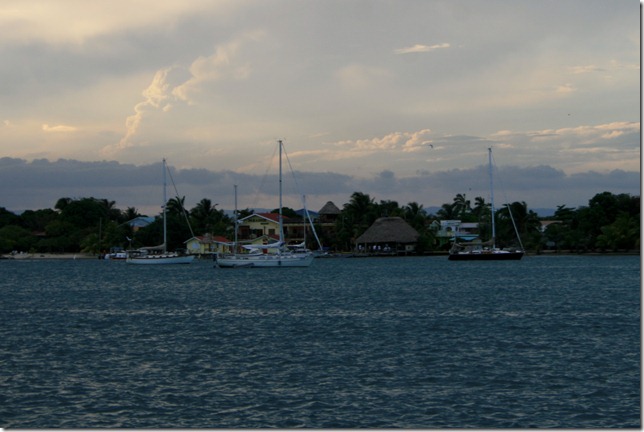 We were under the impression from other boaters and books that Placencia, while still small, was a nice growing town.  After visiting the town, that is not the impression we left with.  Maybe we needed to visit the resort area north of town, maybe that is the nice growing area.  But we prefer the real local experience.  Placencia is very small and more run down than Caye Caulker.  The anchorage is nice and in light of the recent crimes it feels good to have neighbors. It is also very picturesque from the anchorage.  Placencia is on the mainland with the Mountains climbing behind it in the distance.

David and I found a very nice small restaurant to have dinner in a lit up garden behind a house, called Secret Garden.  I did worry for the first time after we docked our dinghy at the town dock to go to dinner if it would be there when we returned from dinner.  Even though David locked it to the dock I was not sure it would still be there.  All the cities we have visited I have never before wondered that till Placencia.  Earlier in the day David took Benjamin and Suzie into town and they dinghied to a dock near a hotel and restaurant and said it was a much nicer area than the town dock, that is probably where we should have gone, but I thought the town dock would be closer to the restaurant.  I was grateful to see the dinghy still chained up, with its motor when we returned from dinner a couple hours later. 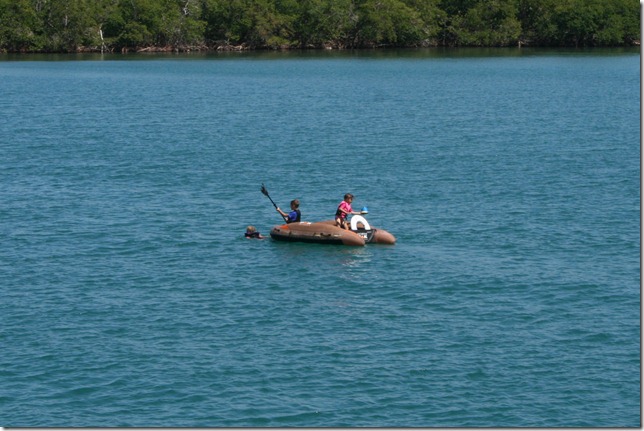 Sadly, Placencia did not have a branch or ward for church on Sunday, I really would have liked to attended another branch in Belize.  We rested in the morning, and then it got hot out.  The winds had died down so without a breeze in the afternoon soon, it gets very hot in the boat.  The 3 older kids decided to blow up our row boat and paddle to the neighbor boats and say hello, cooling off in the water on the way.  They had to practice team work skills to get anywhere against the light current.  They each took turns pulling the boat in the water, while the other 2, or 1 on the boat would paddle.  It was fun to watch them work together.  When Calvin was in the water, Isabel would order him “faster motor, faster”  as he tried to kick and push the small boat from behind.  Eventually they decided they liked pulling from the front better.  David took pity on them after a bit, and inflated the bottom raft of his inflatable sail boat.  This was smaller than the row boat and easier to get on from in the water. They visited with a couple of the boats nearby, saying hello and introducing themselves while Benjamin and I sat on the top flybridge in the shade watching them, enjoying popsicles. 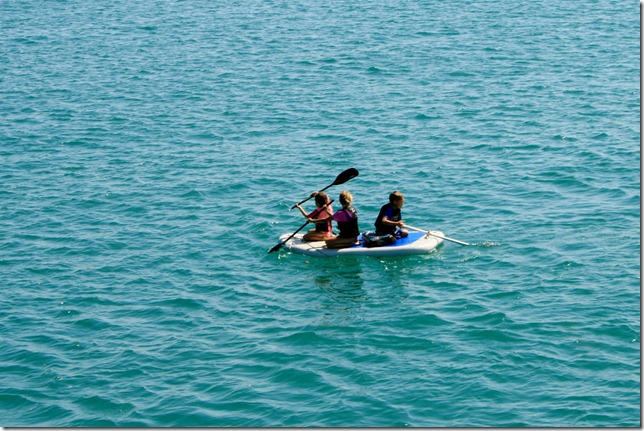 Monday morning brought preparations to leave.  David headed off 3 miles in the Dinghy to the port of Big Creek where the customs and immigration offices are.  They were very helpful he said in getting us cleared to leave Belize.  The total cost for us to clear out was $22.50 USD.  We expected closer to $100, so this was a pleasant surprise.  We contacted the Guatemalan agent in Livingston to help us clear in there to gather info about that area and emailed him all our documents so he could prepare for our arrival.  Than we decided how to get to Guatemala.  We originally thought we would head to the Sapodilla Cayes on the south edge of the reef, but as David looked at the map, he preferred for us to arrive in Livingston in the morning, clear in, and still have time to make it all the way up the Rio Dulce to what is called the Marina zone.  This was his plan due to safety concerns about the area.  Then we would not have to anchor overnight along the river.  So we picked out a little anchorage half way between Placencia and Livingston, South Moho Caye and off we went.