Our first stop in the Exumas was Highborne Cay.  Since we arrived in the dark we anchored as close as we dared and could see in the dark, so in the morning we moved in closer so it was a good swim or kayak to the beach.  The kids were excited it was Saturday and could head to the beach as soon as chores were done.  No school work keeping them from the beach.  They played there for hours. 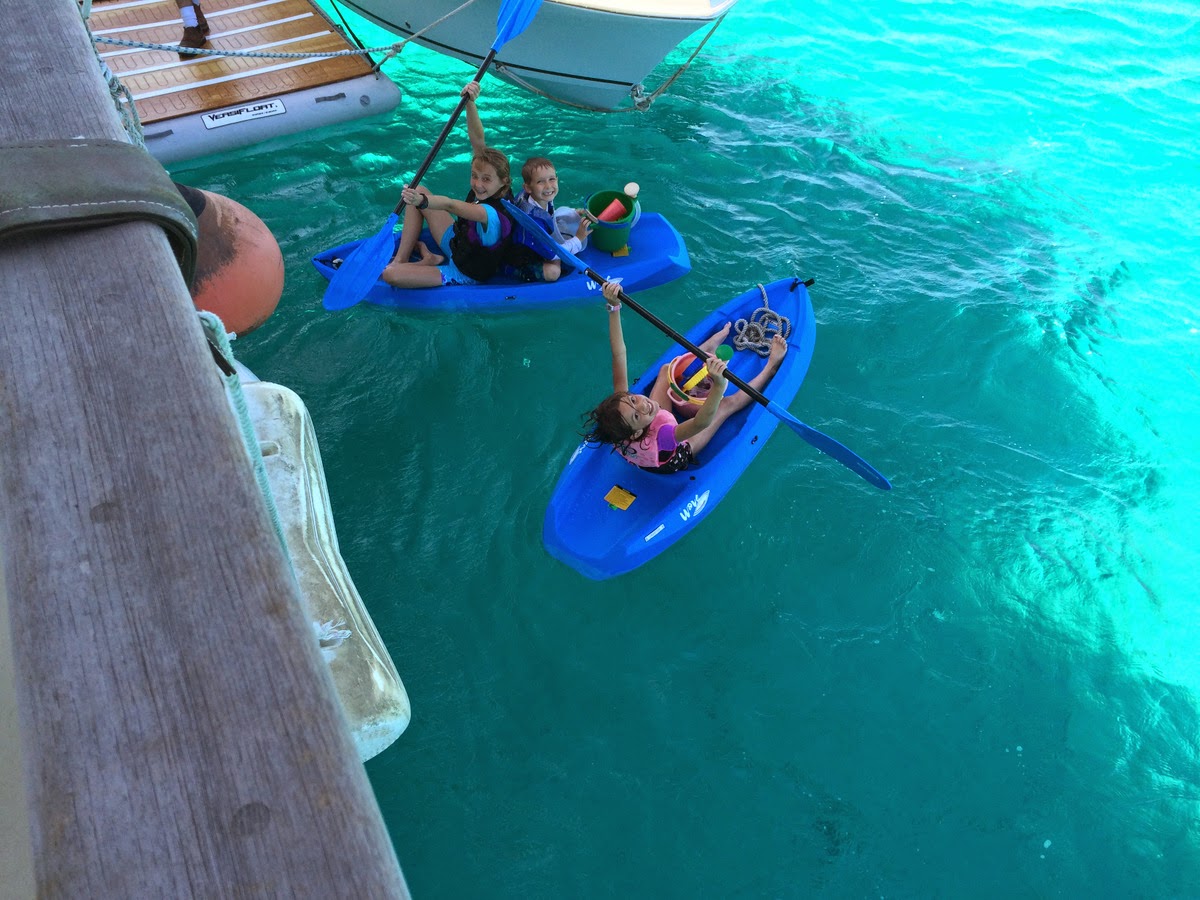 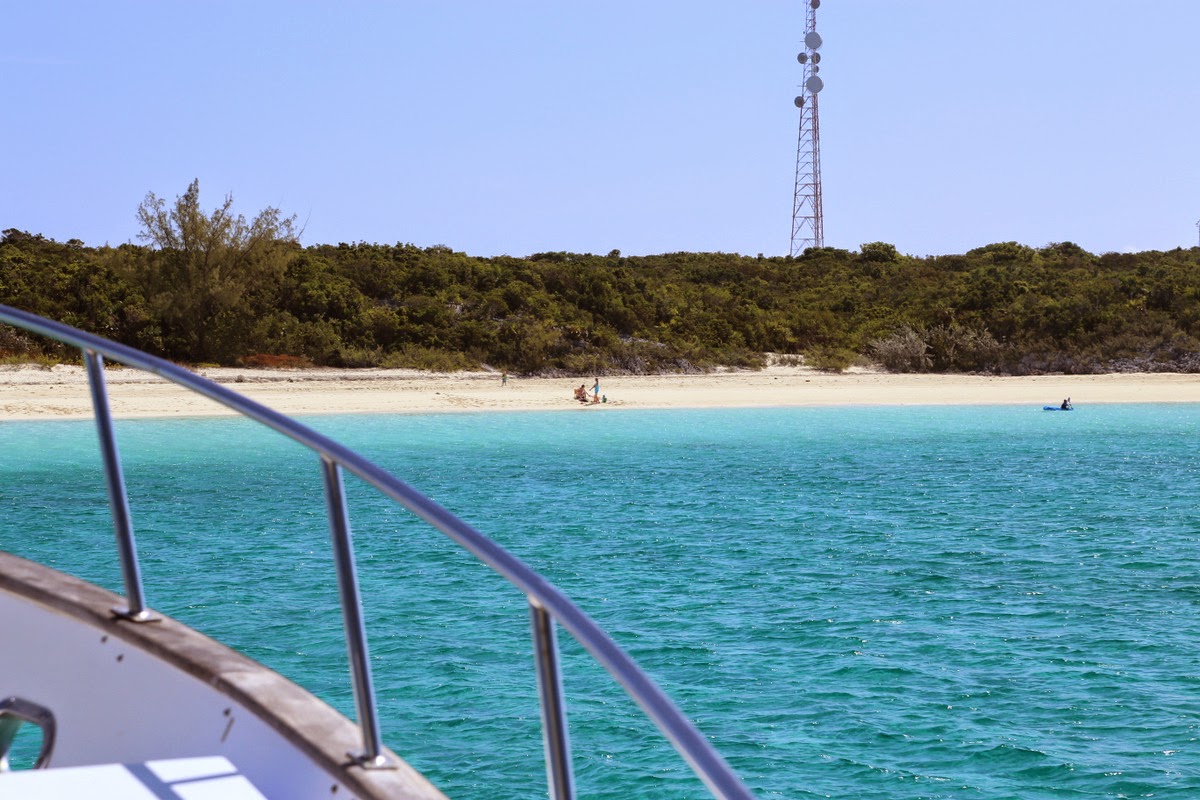 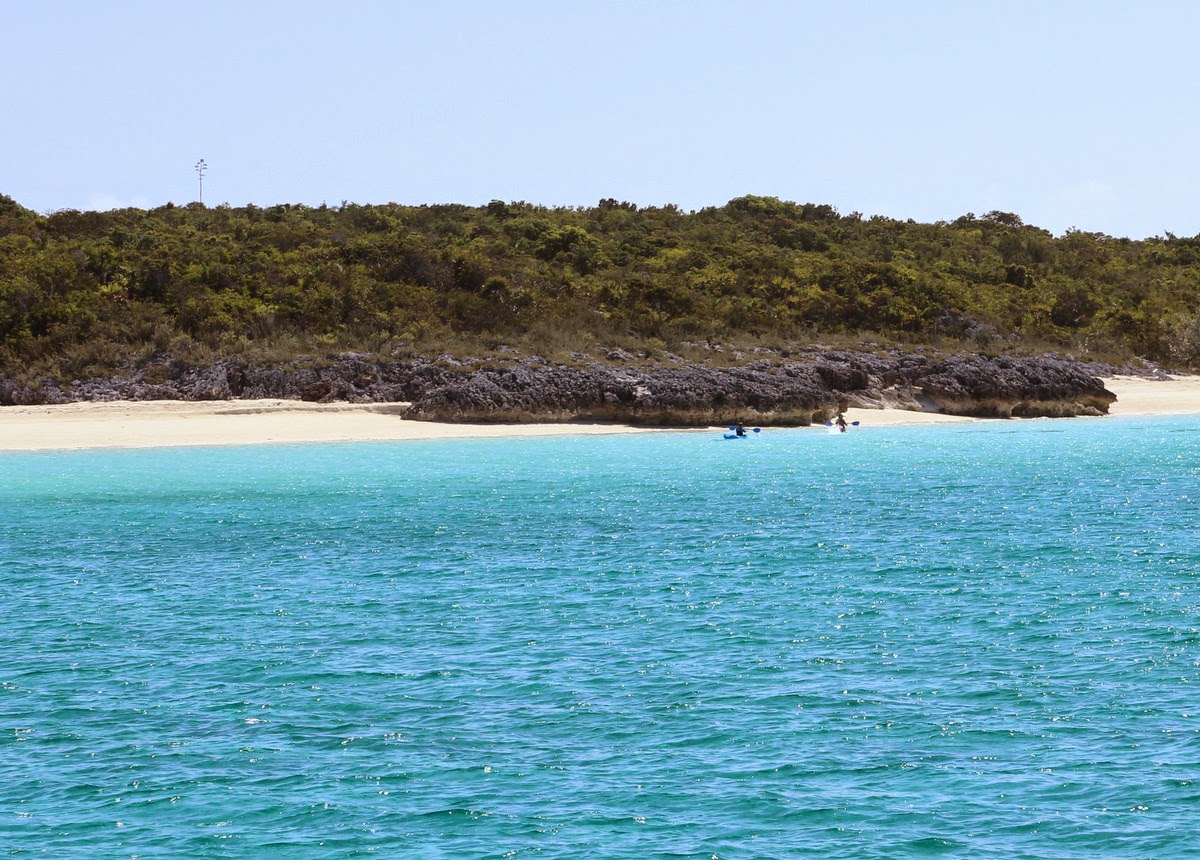 The tall tower on the beach is very important.  It is the only cell phone tower for miles.  With our Bahamas cell phone SIM card, we intended to make the most of our range of that tower with internet. 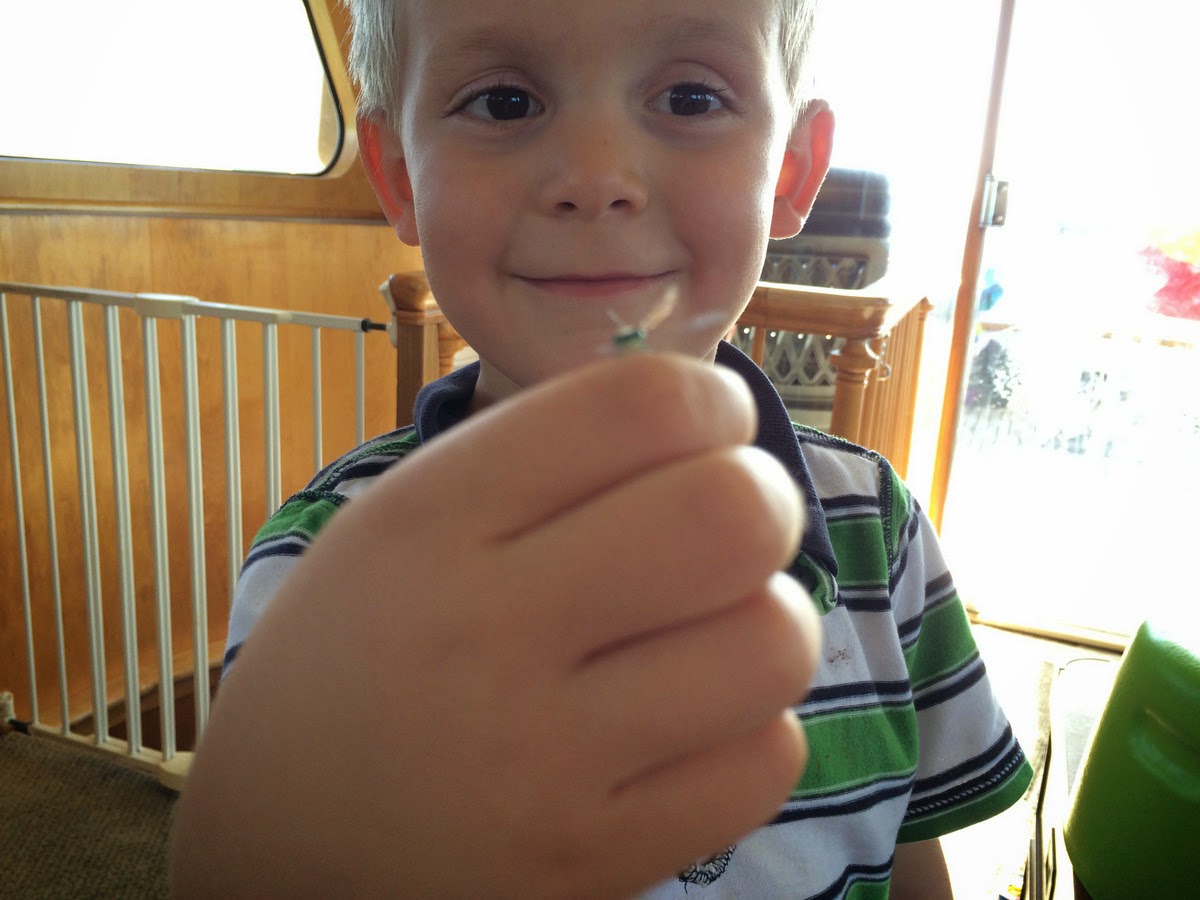 After spending a little time at the beach, I swam back to the boat.  David said Matthew had a pet.  So Matthew showed me his new friend.  His pet dragonfly.  He caught it by the tail as it was flying around the back deck.  He wanted to put it in a container and keep it.  He would hold it and pet it.  He loved his little dragonfly.  Eventually it was time to let it go.  We were worried he had harmed it, but off it flew as we waved goodbye. 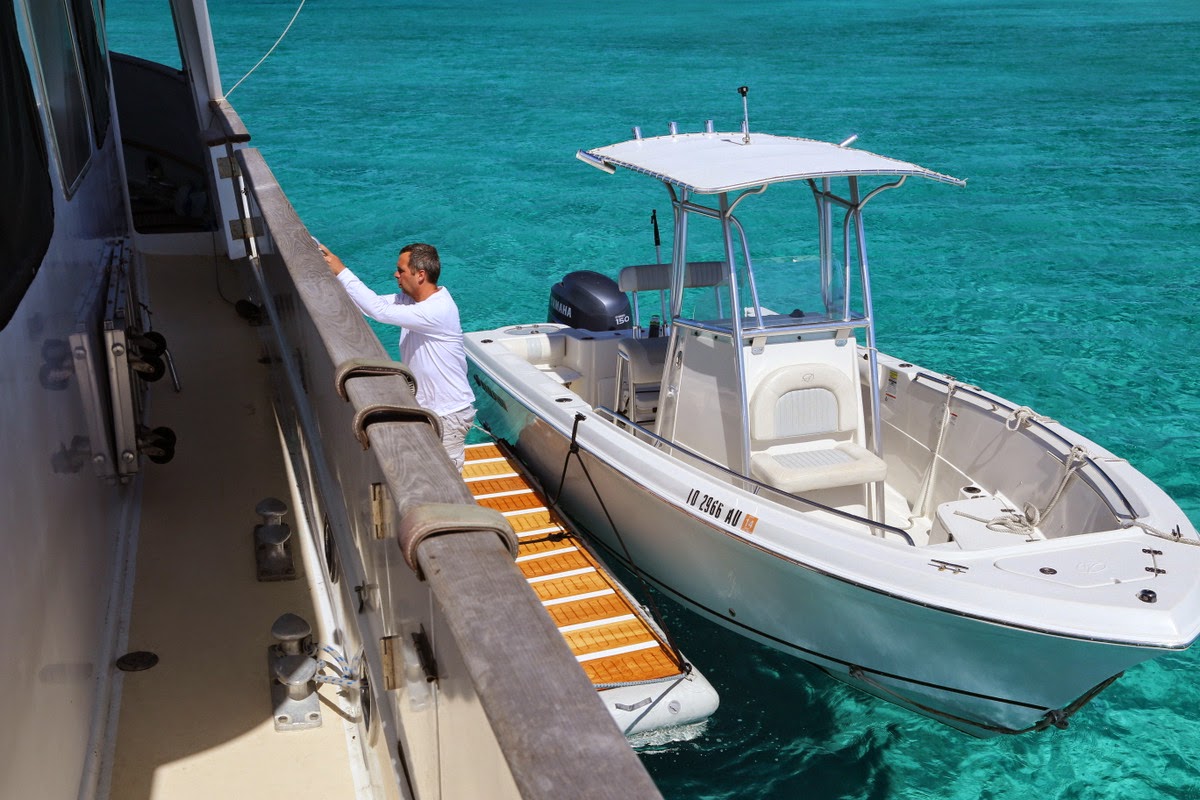 Our new purchase this year is the floating dock.  It has been great in calm anchorages to tie up to the boat and use for loading/unloading from the tender, and for swimming on and off of. I, sadly still need a ladder or step to help hoist me out of the water.  Poor Jessie just begs to go in the water.  We put her in and she made a beeline swim to shore.  She ran around on the beach for a bit, then would look out to the anchorage.  I wondered if she knew which boat was ours.  Especially when she was swimming in the water again.  David eventually went to get her, so she wasn't lost to us. 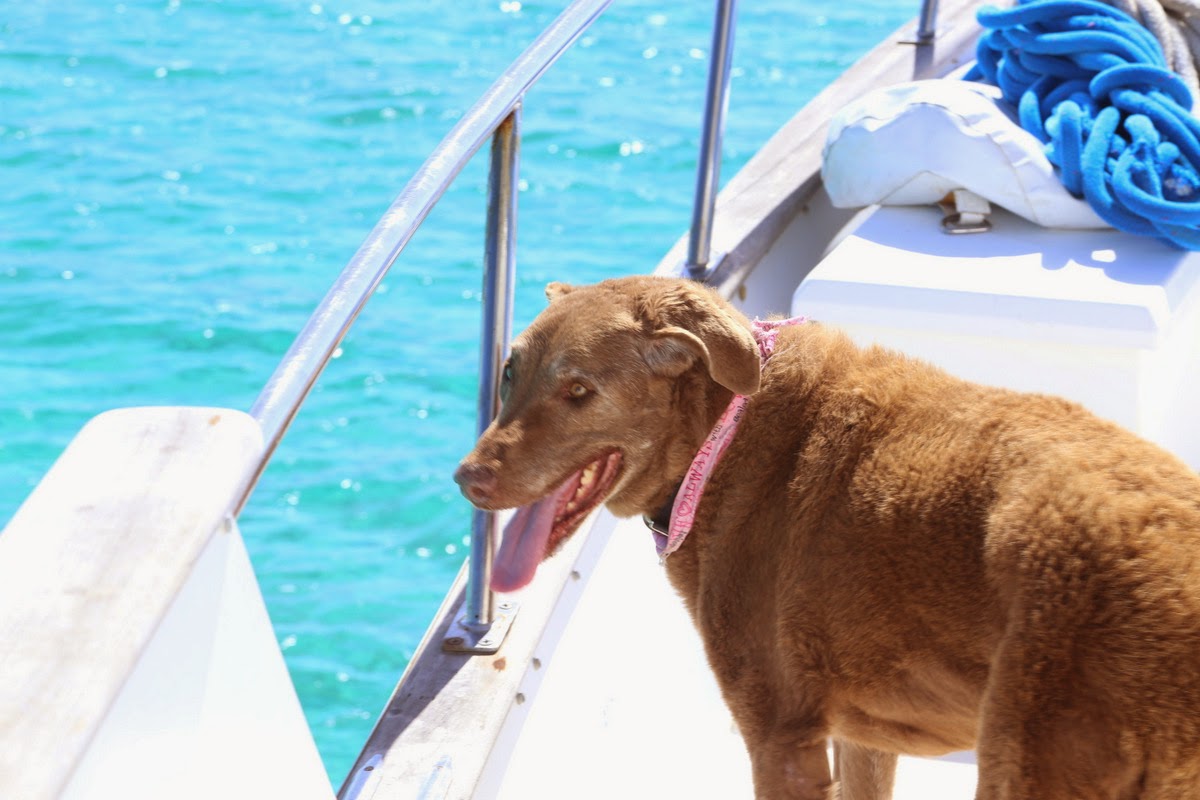 Jessie is an old girl, 12 now.  These last few years she has started to shed.  Maybe a part of her Thyroid condition.  At any rate, she sheds, and we don't like it.  So we decided to shave her.  Boy what a difference that has made!  She hardly loses any of her hair now.  But gone is her wiry coat, common to Chesapeakes, instead she is left with soft fur. 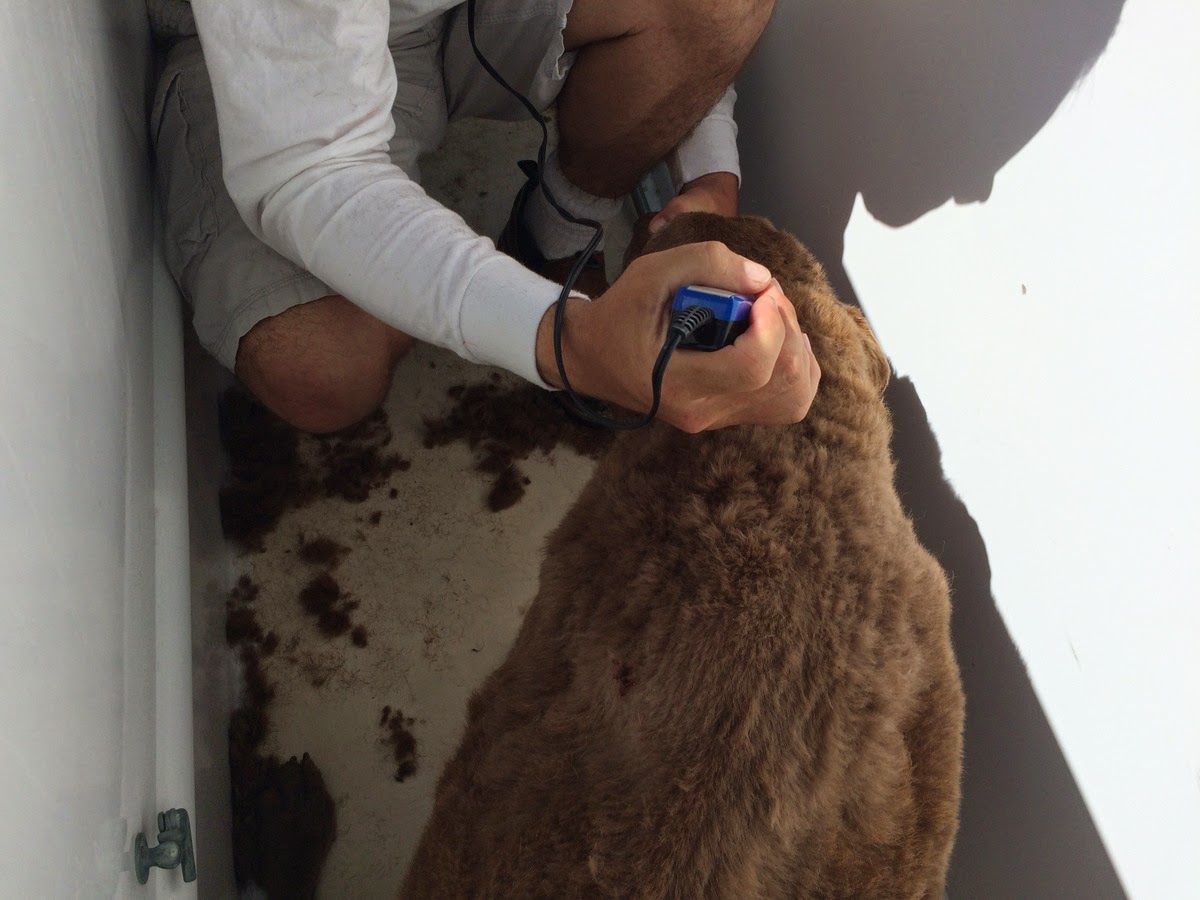 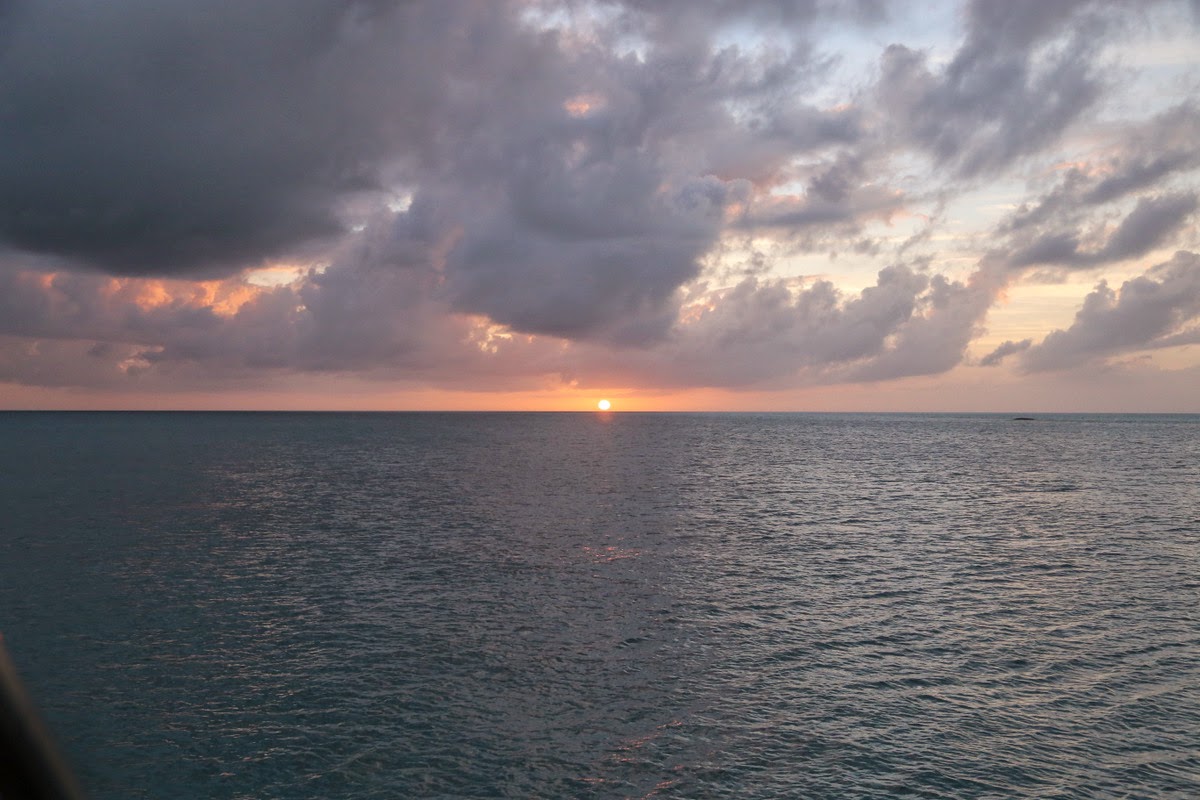 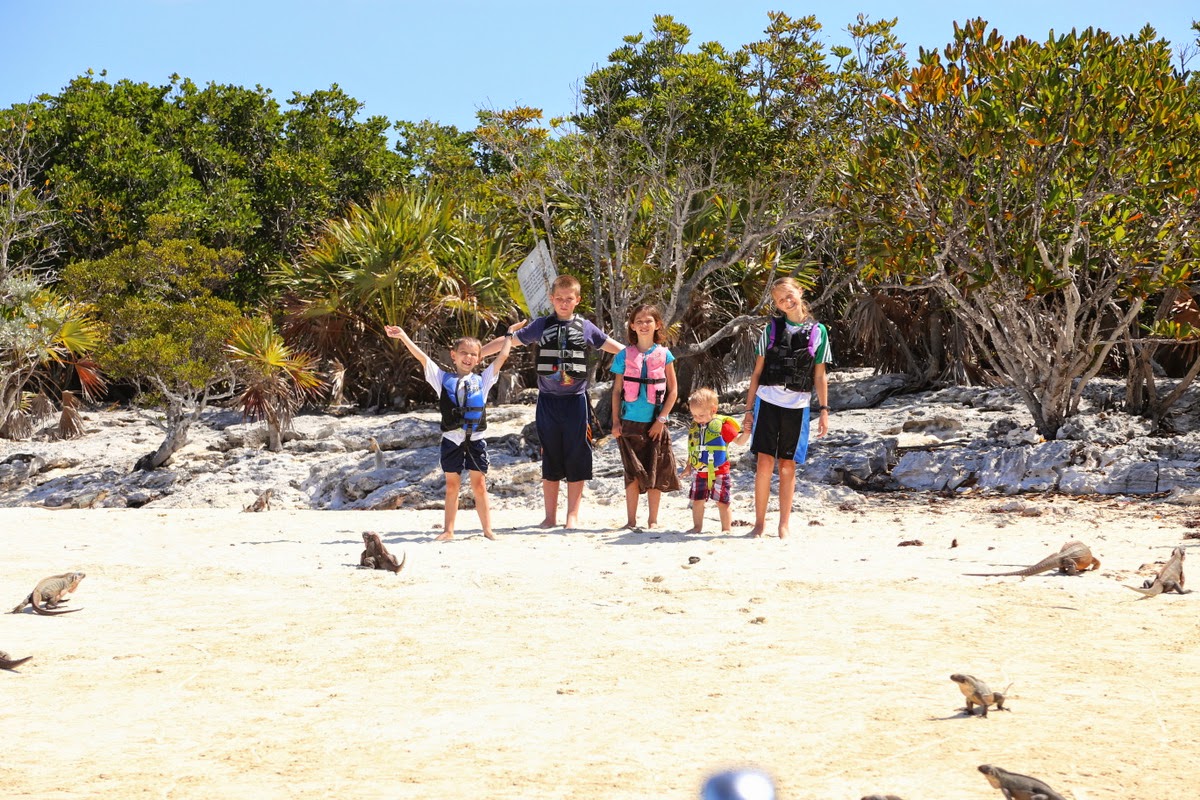 The island to the north of Highborne has a number of Rock Iguanas living there.  They come out to the beach when you land, hoping to be fed.  Sunday after our primary lesson we went for a family outing to go see the Iguanas. 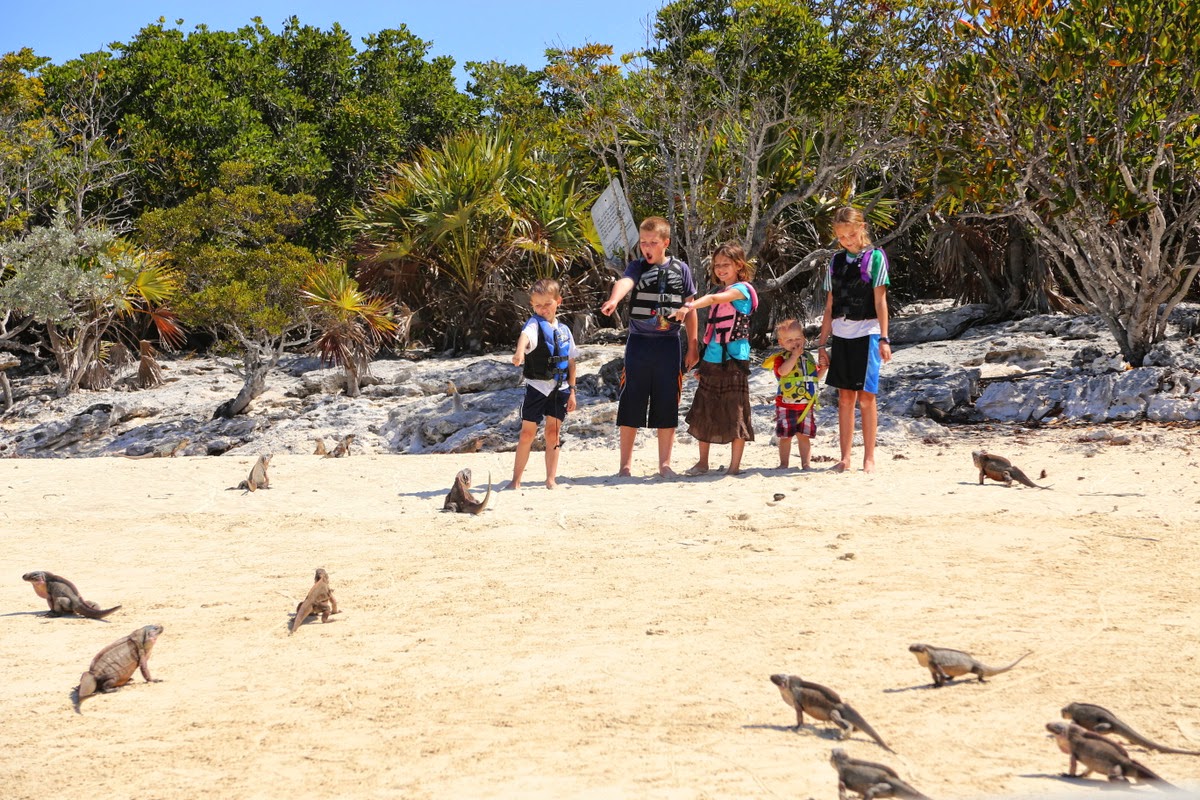 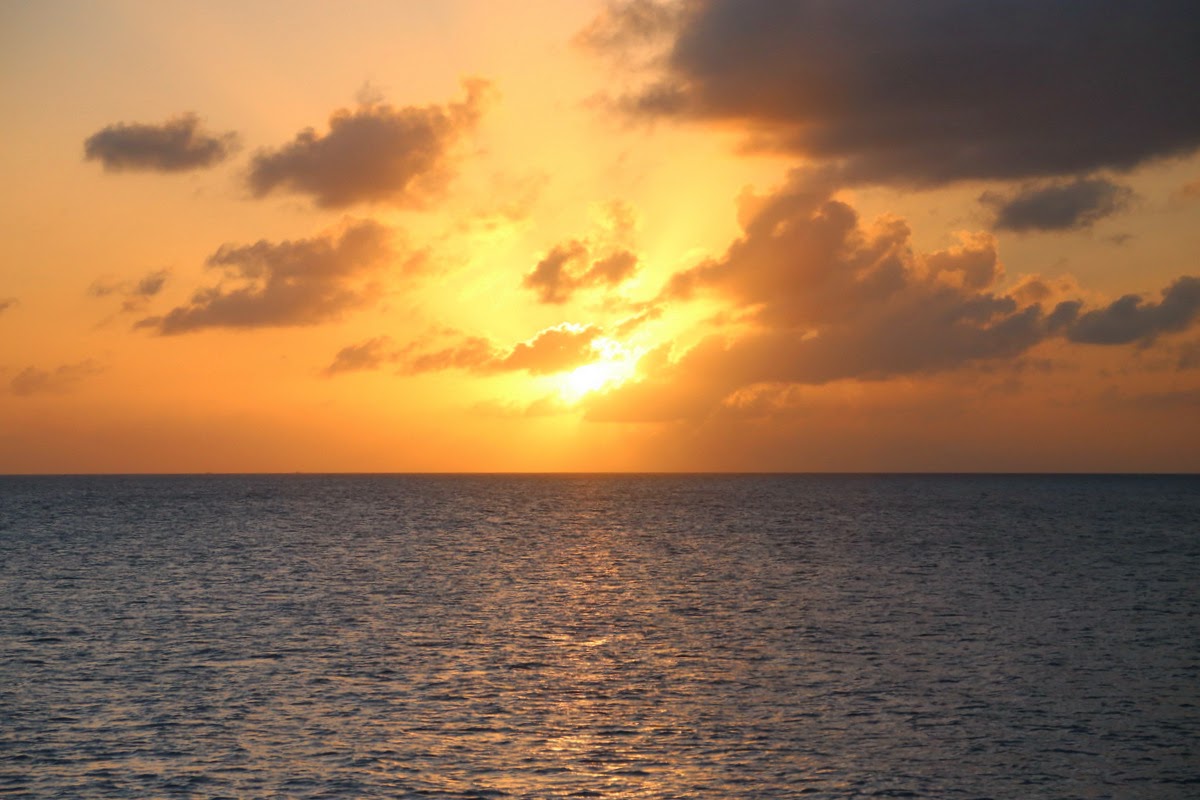 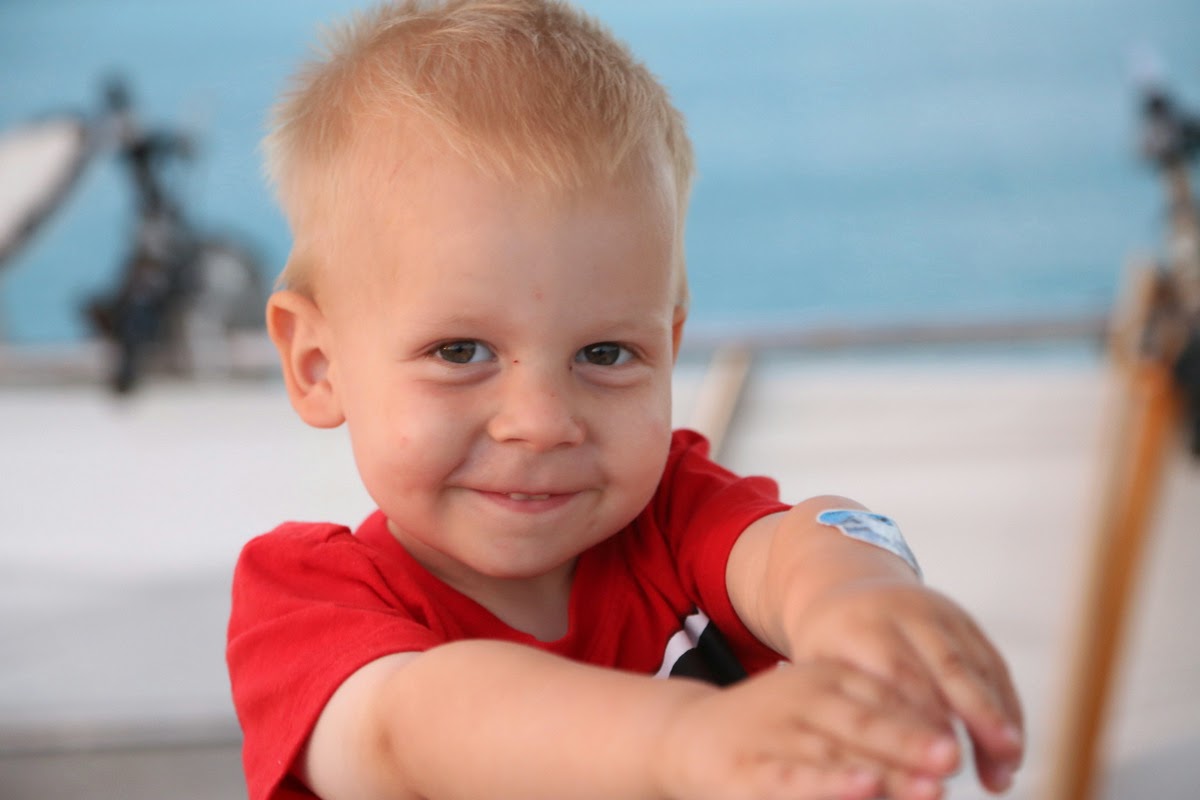 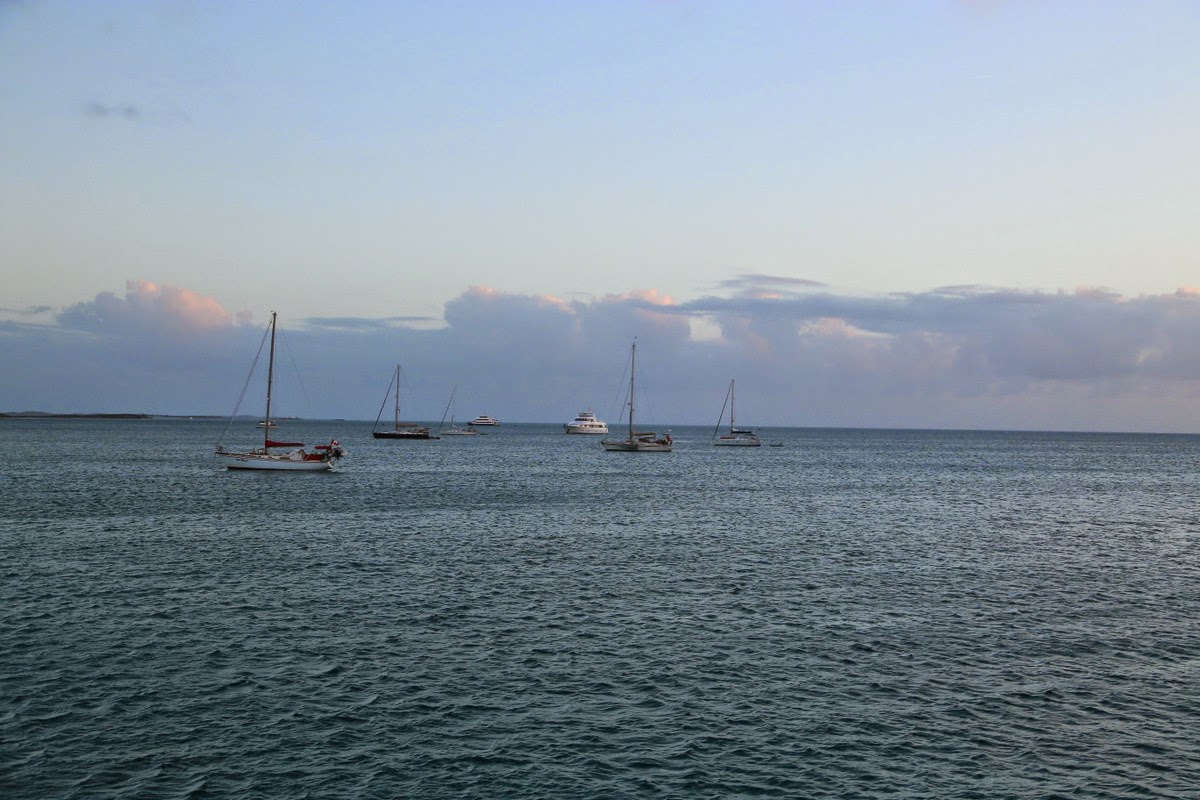 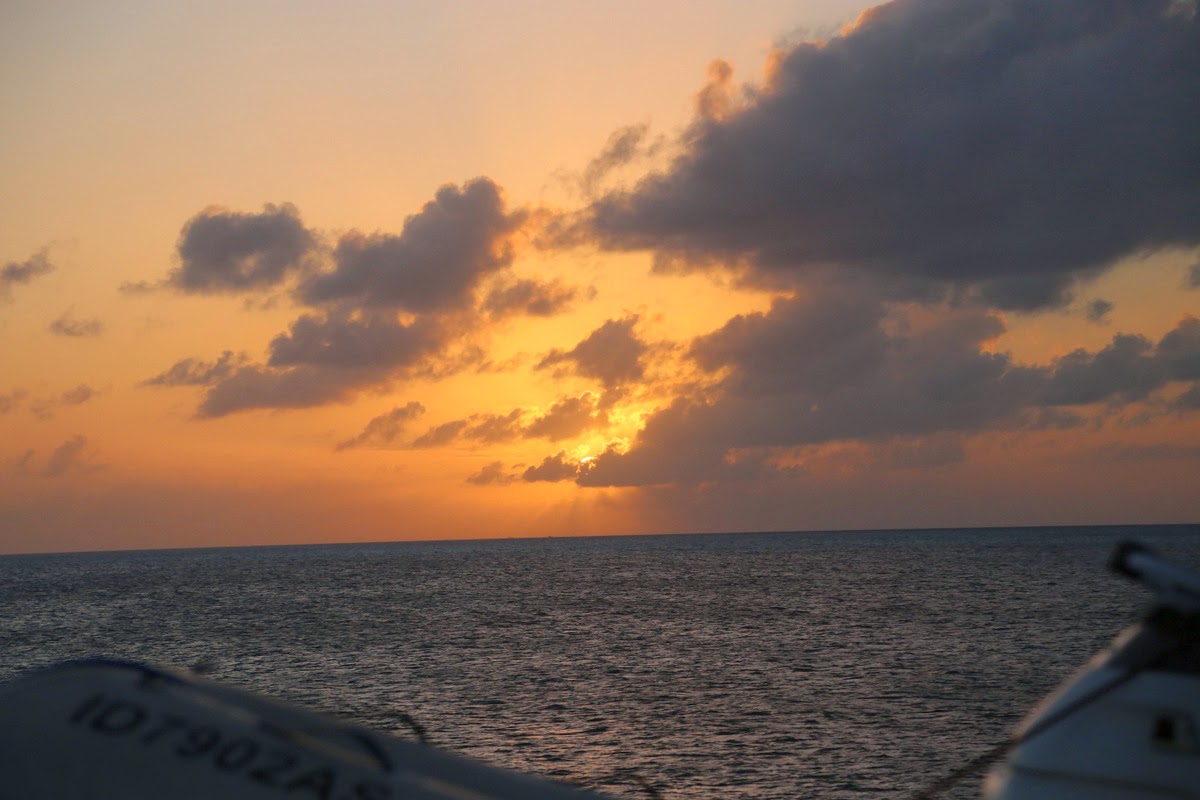 By Monday morning it was time to head on to see new sights.
Posted by The Blood Family