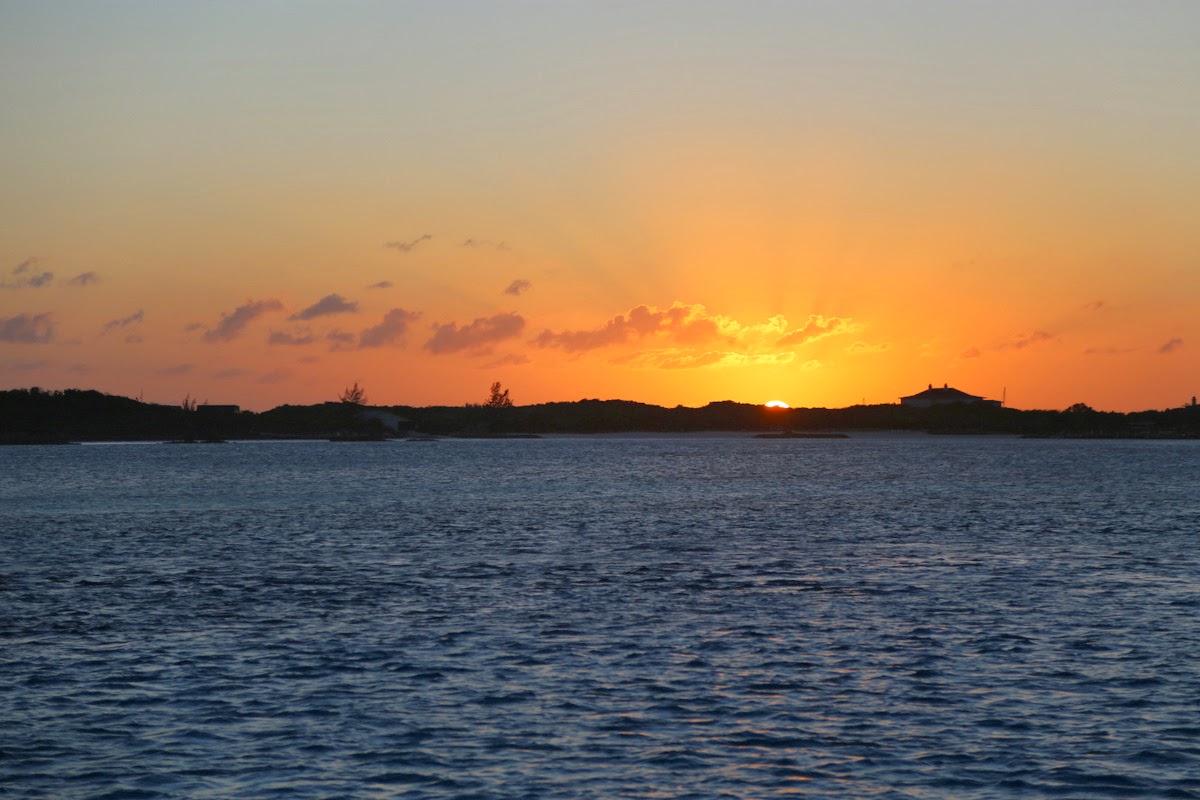 Sunday Morning was Benjamin’s Birthday. He turned 7! After a special birthday breakfast of a family recipe for Dutch Pancakes, it was time pull anchor and cross to Eluthera. 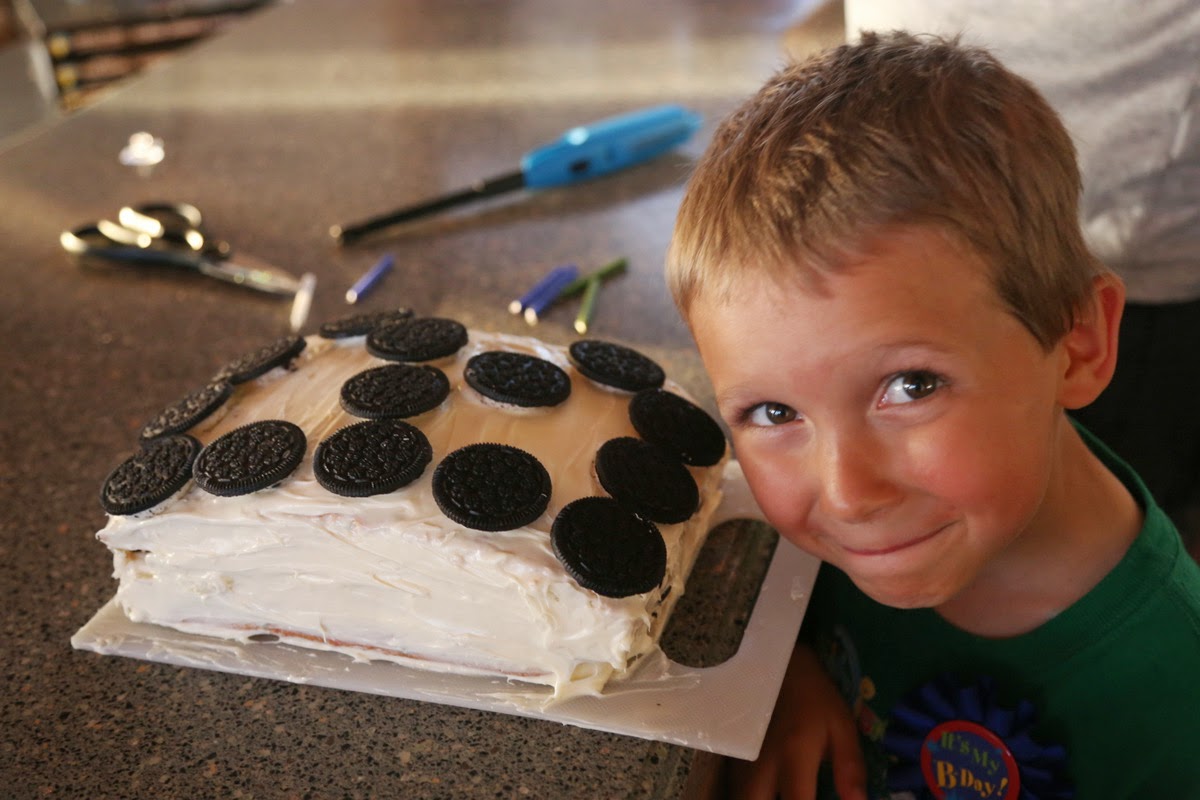 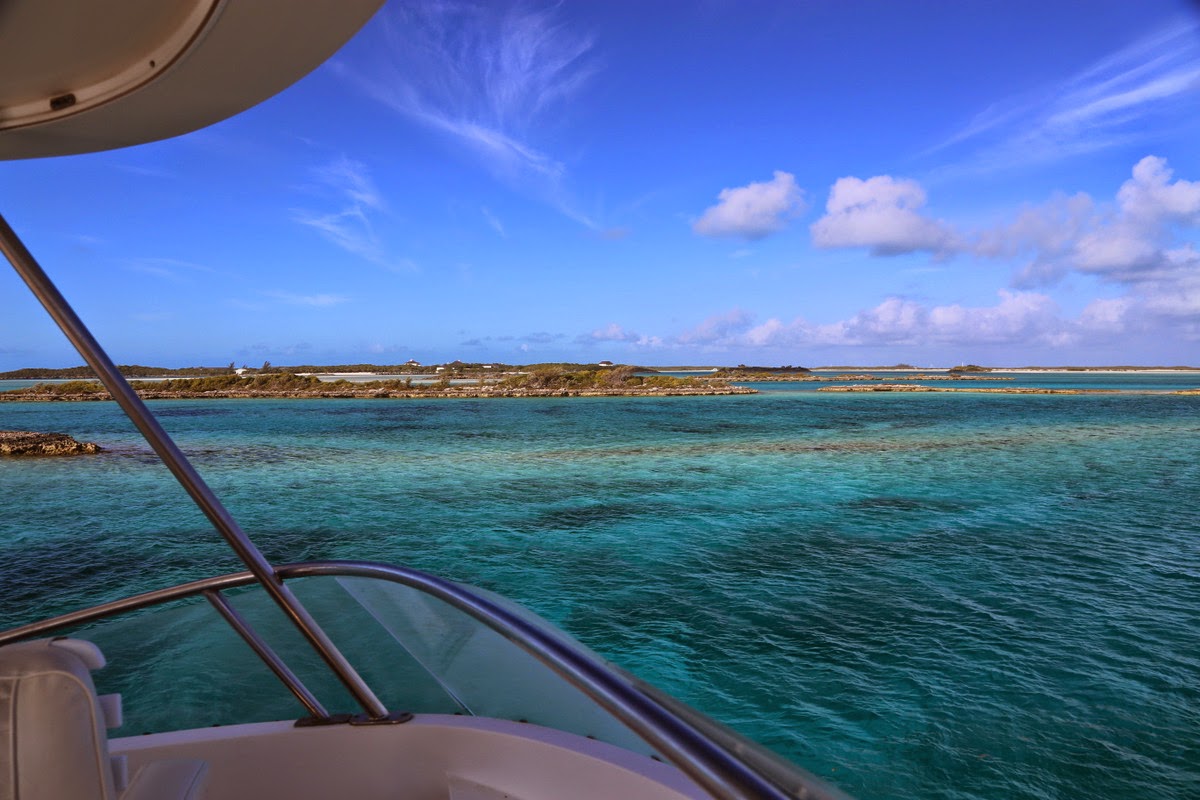 We had spent an hour the prior afternoon looking at both cuts out to the ocean, driving thru them with the tender, checking depths, sand shifts, and coral heads.  We decided to take Joe’s cut, between Joe Cay and Thomas Cay.  There was only one tricky part of a zig zag around one section of coral.  Other than that, the way was deep and easy.  I'll admit... I was sad to leave the Exuma's.  Sad to say goodbye to the perfectly blue water and white sand beaches.  The scenery takes my breath away, everyday.  I was sad to go.  But on to new places...

Once out in the Exuma Sound, the waves were not as settled as we were hoping for, but we continued on.  We even had a short church lesson taught by Isabel.   Only Matthew, Alex, and Brittany got to revisit breakfast twice.  Alex and Brittany both fell asleep and Matthew adjusted to the swell.  After a couple of hours, the waves settled more, and we were closer to Eluthera, which was maybe helping to block waves.  Either way, it was calmer, which made the rest of the day nicer. 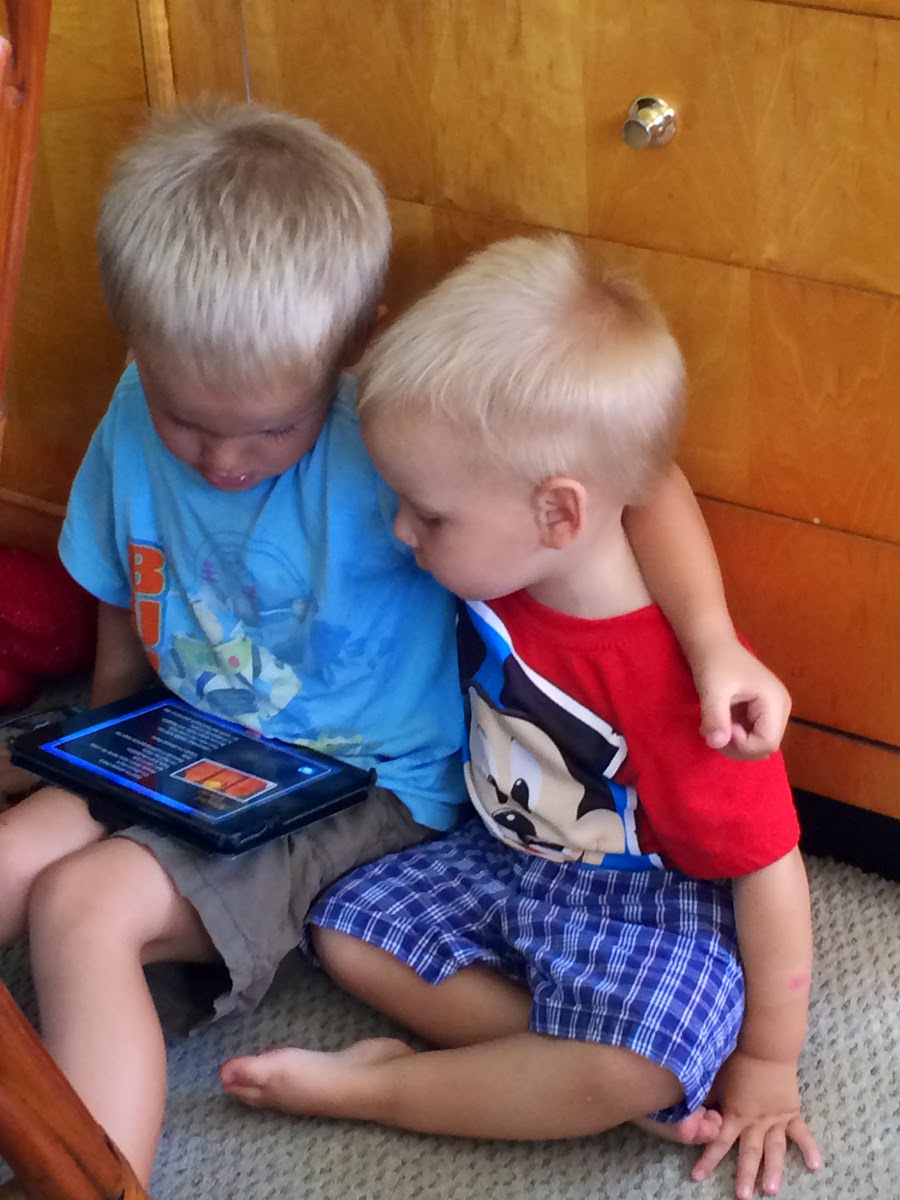 By late afternoon we were rounding Cape Eluthera, and anchoring just before dinner in Rock Sound.  Rock Sound is a nice shallow bay area.  Most of the area is 6-8 feet deep, it is well protected.  But the water is greenish, not perfectly blue.  The winds were light, so the water was extremely calm and we could anchor anywhere.  There were about a dozen boats already at anchor, but David wanted to slowly peruse the anchorage off the town settlement, while he looked at internet connections to see where the best spot to anchor and get internet would be.  We finally settled just south of the government dock. 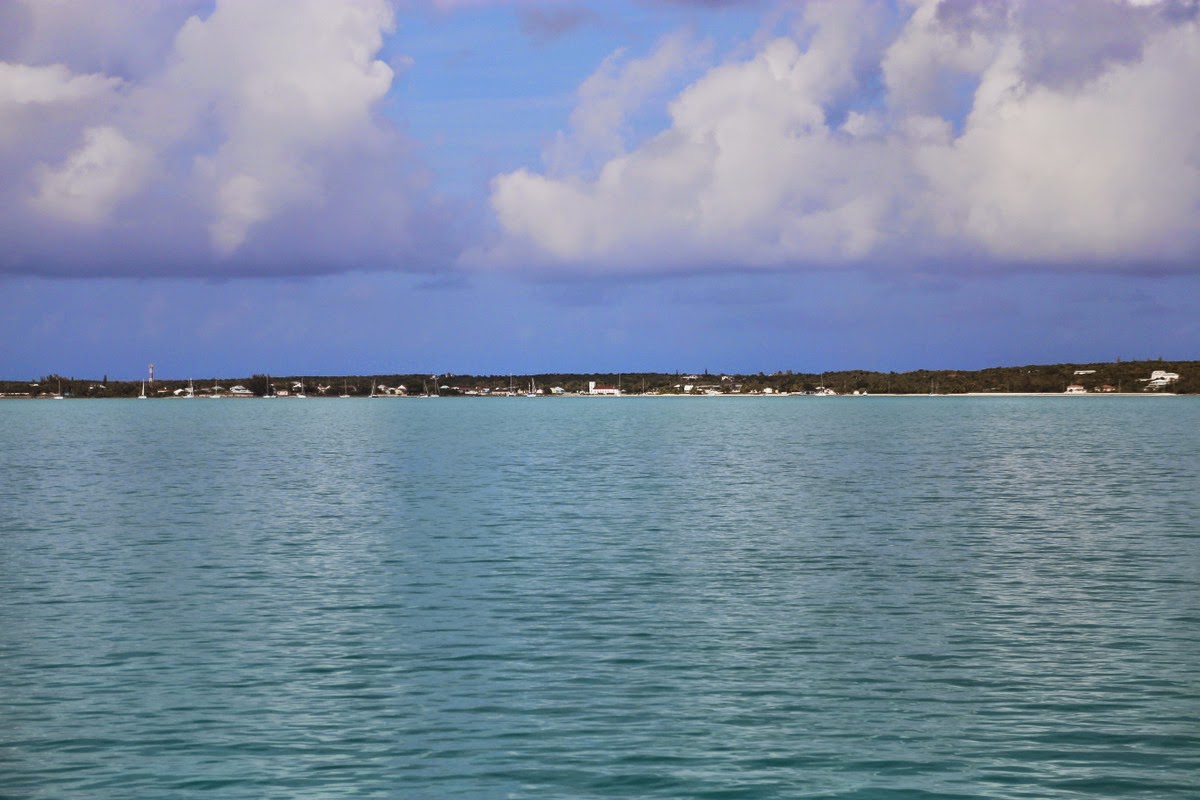 For his Birthday Dinner, Benjamin wanted homemade corndogs, and “don’t forget the green salad with Ranch dressing, mom” he said.  Love that my kids enjoy salad and vegetables!  Benjamin especially enjoys a good green salad with Ranch.  He is often commenting on whether I made a good salad at dinner.  He also wanted and Oreo Cake, so we used what was on board, a package of Oreo’s, and put them in the middle of the cake and to decorate the top.  Savannah shaped the Oreo’s into a “B” for Benjamin.  He loved it!

The next morning we headed in to town with Alexander to walk to the grocery store.  We’d read they had a well stocked, well priced, large store here.  It was definitely larger than the stores in the Exumas, and reasonable priced for the Bahamas.  We picked up a few needed items, but we are still fairly well stocked on the boat.  I would have liked some bananas, but they didn't have any.  The boat comes tomorrow for restocking.  Such is life in the Bahamas.  Sometimes they have it, or maybe you have to wait till the weekly mail boat arrives. 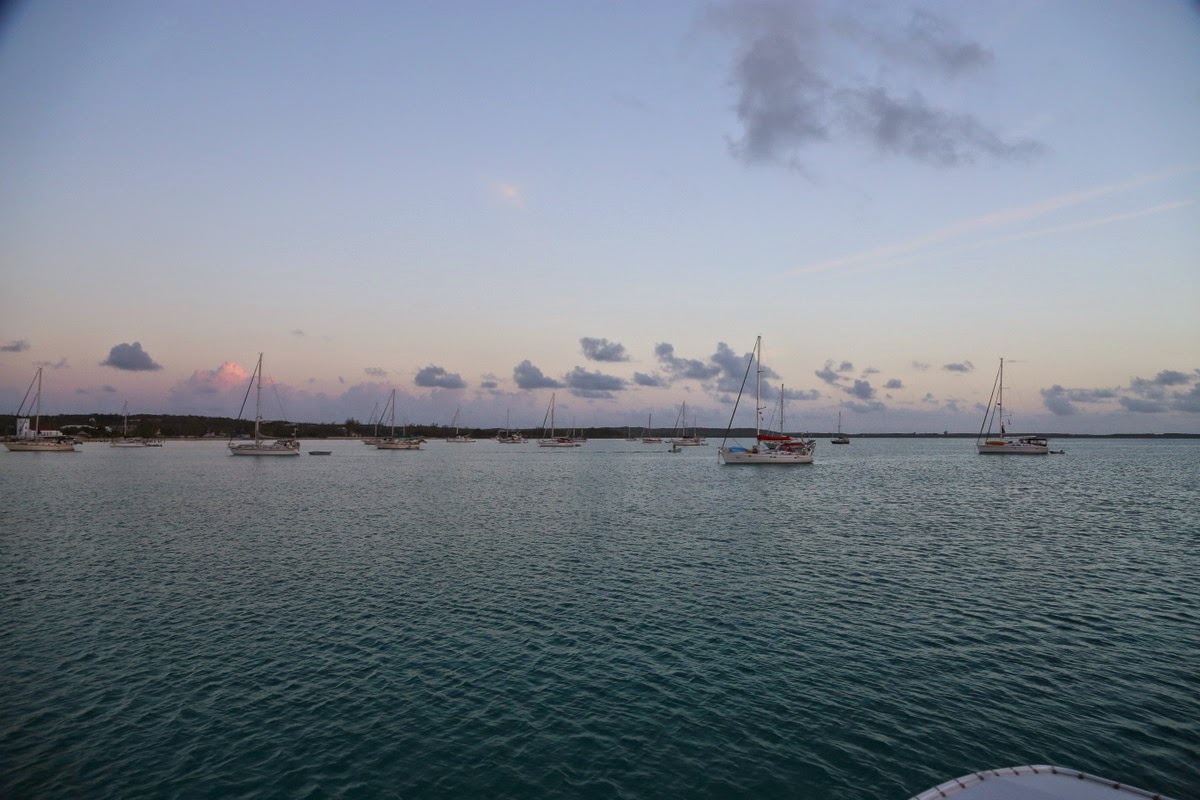 In the afternoon after school, the kids kayaked over to a nearby boat that we noticed had kids aboard too.  We invited the kids over to play on the water trampoline and toys behind our boat.  We found that the kids were part of 2 families, on 2 boats anchored here.  Both families are from Montreal, and the kids speak French.  That didn’t stop them from playing together and having a great time.  We visited with one of the fathers while the kids played for almost 2 hours.

The next day Matthew, Alex, Savannah, and Isabel came to shore with us for another walk around the town.  This time we headed a little more inland.  We found an old school, with a dilapidated playground.  The kids played on the slide and climbing bars for a bit.  As we wandered, people were very friendly saying “good morning” and asking how we are today.  We walked out to the Ocean Hole, an inland deep pond, 600 miles or more deep, with salt water and fish that live in salt water.  They believe it is connected to the ocean, but have not found how.  Blue holes, such as these can be found through out several of the islands in the Bahamas. 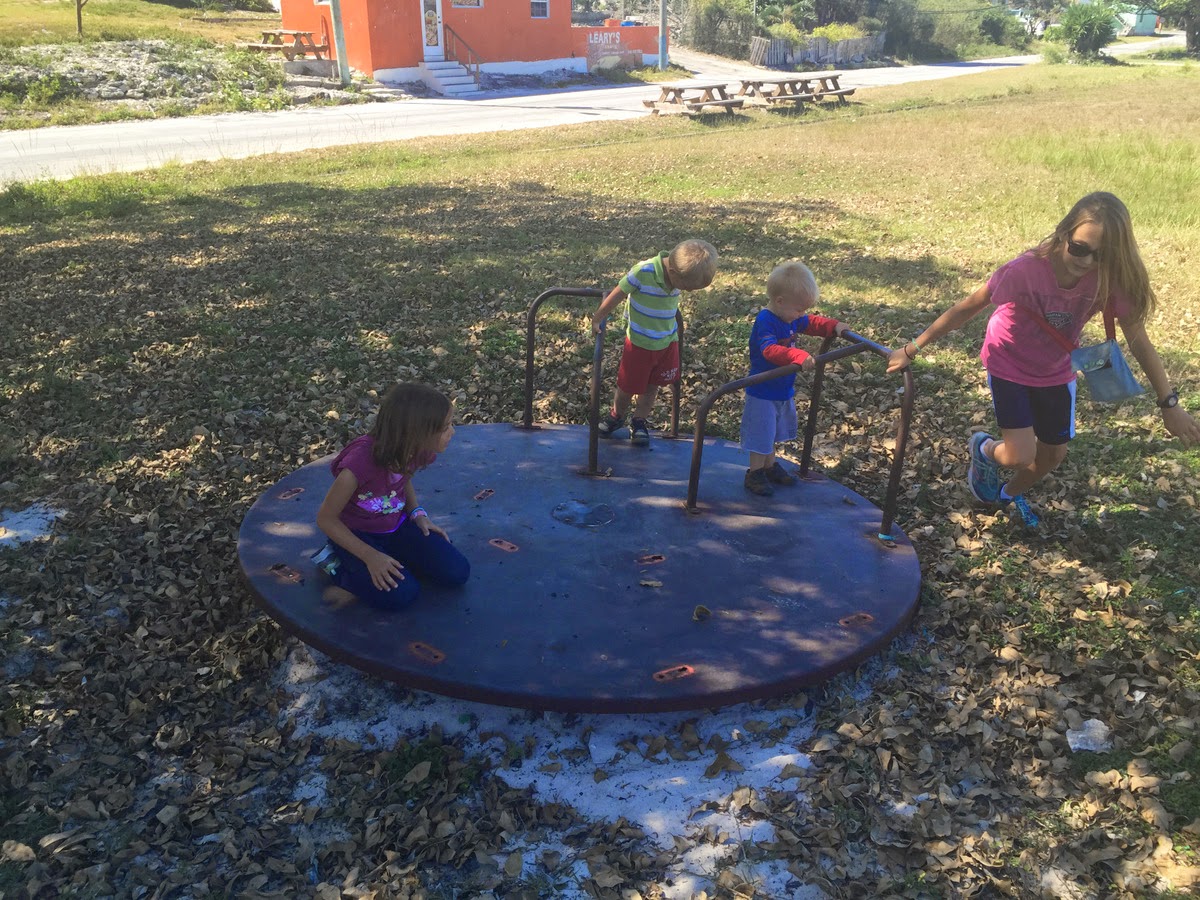