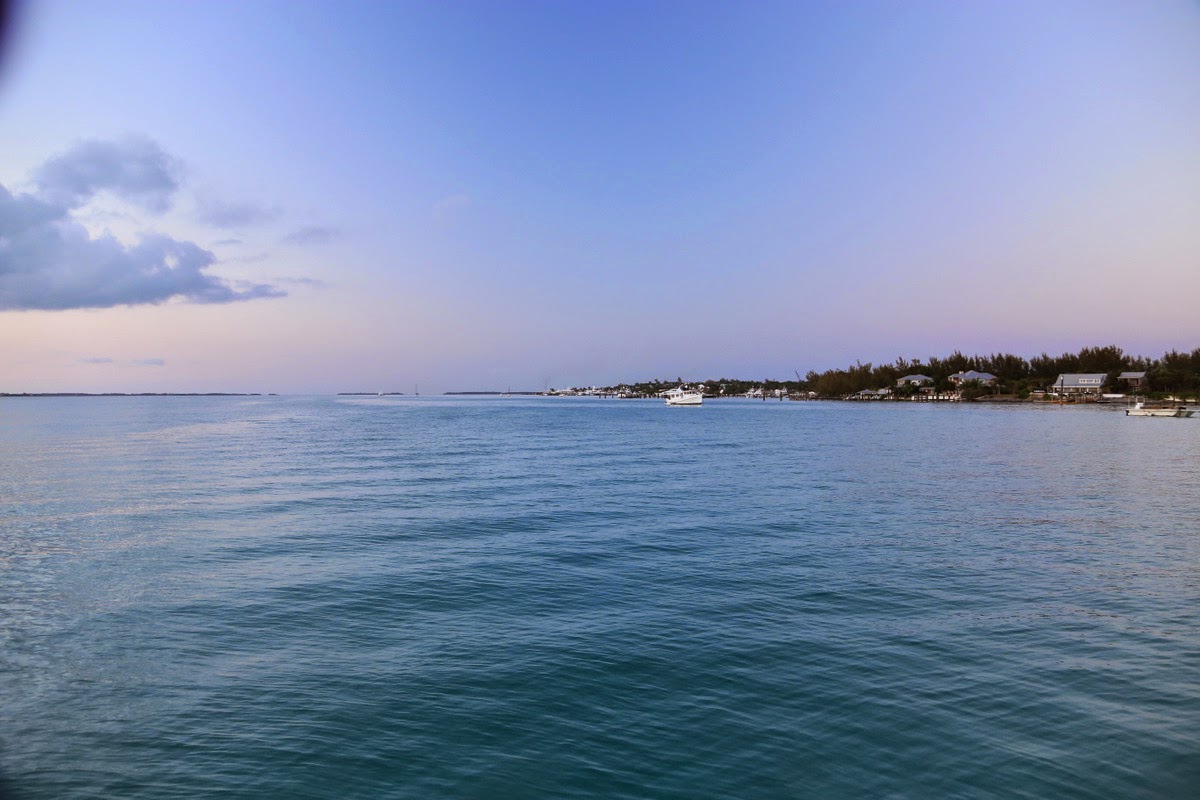 Harbour Island is a quaint tourist town.  It was once a big boat building area for the Bahamas, but today it attracts tourists.  There are a few small resorts and many homes or cottages for rent.  Or to buy.  There are many million dollars homes spread across the small 5 mile long island.

Along its eastern shore is a 3 mile beach, known as “The Pink Beach”.  I’d heard of this pink sand beach several years ago when we first made a sailing trip to the Bahamas, and have wanted to see it for myself.  So here we were, anchored in a beautiful bay off Harbour Island.  We’d made it thru the Devil’s Backbone, all to see the Pink Sand Beach.

First things first though—and that meant short naps for the littlest ones.  And while they were napping, David and I made a quick trip into town to arrange to go diving the next morning, Saturday.   And now that we knew where to tie up the tender to get to shore, we headed back to the boat to pick up the whole family to head to the pink sands.

And just as we loaded into the tender, the dark clouds started rolling in.  Ok, they’d been around most of the day—remember the cloud that blocked our sunlight as we passed by the Devil’s Backbone.  But now the one coming closer had rain.  Well, we were going to the beach, so a little rain wouldn’t hurt.  We showed up to shore just as it started to drizzle.  We still had to walk about half a mile through town, across to the east side of the island.  About halfway there, it started to pour… and the kids said—but now we’re all wet!  I had to laugh—we are in swimsuits going to the beach!  I think getting wet was part of the plan, we’re just a little out of order. 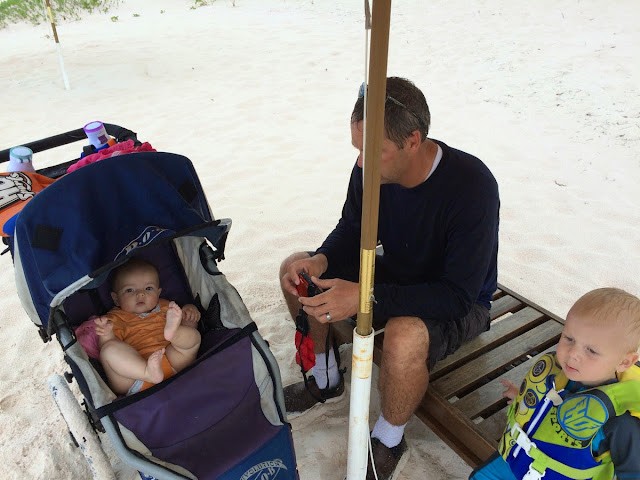 We arrived at the Pink Sand Beach.  It was big, and wide, and beautiful.  The kids ran to the ocean and the breaking waves to play.  While David headed to a little wooden umbrella, most likely belonging to one of the cottages at the top of the beach.  But this way he and baby Julia could sit out the rest of the rain—and maybe dry. 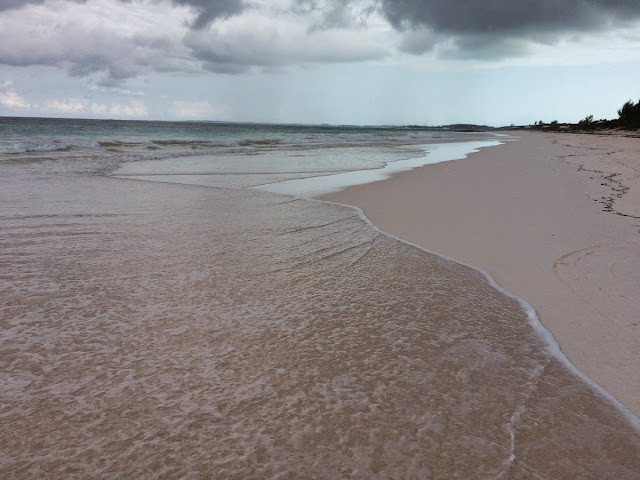 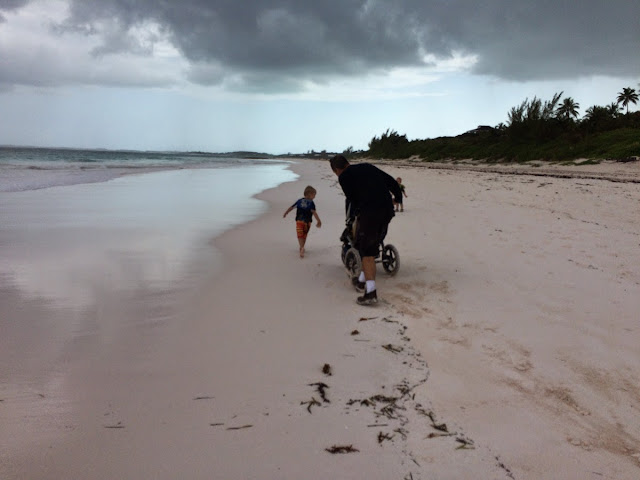 The kids had a blast playing in the surf.  When the rain stopped to a drizzle, David and I, with the stroller, walked up the long beach.  The sand has a little pinkish hue, from the tiny bits of pink shells in the sand, but really it looks like any regular beautiful beach. In fact I had seen similar beaches with pink shells broken down in the sand, and wondered if they were "Pink Sand".  Now I know, they are. While the Beach at Harbour Island is very beautiful... it is not the only Pink Sand beach in the world.

We had a great walk along the beach... little ones chasing after us, having fun.  We stopped to chat with a little family visiting from NYC.  They had been enjoying their spring break week with their young kids on the island. 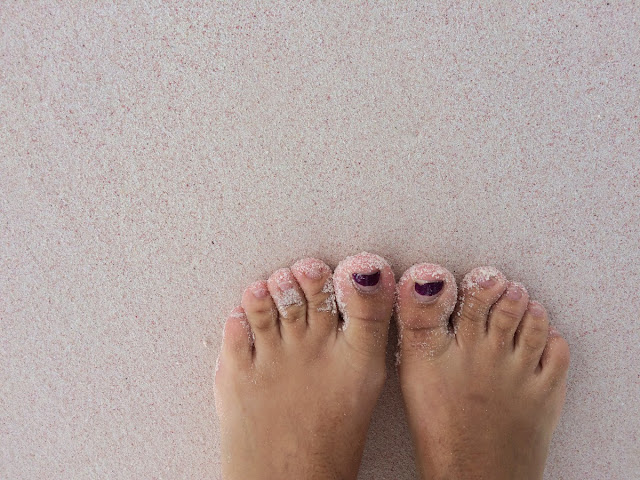 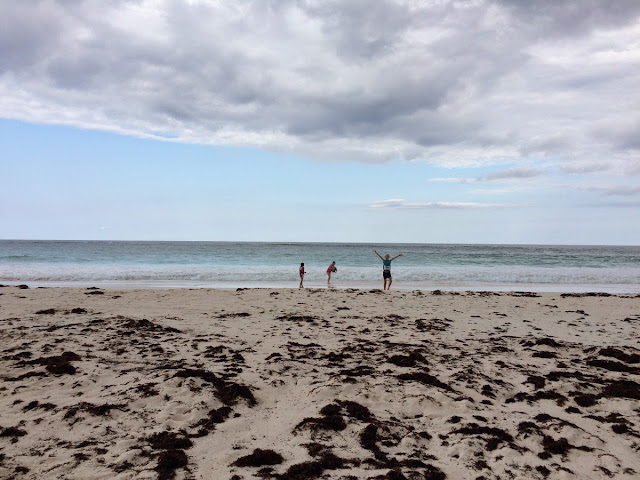 Soon it was time to head back to the boat.  We made the short walk back across the island to our tender.  It had been a nice afternoon. 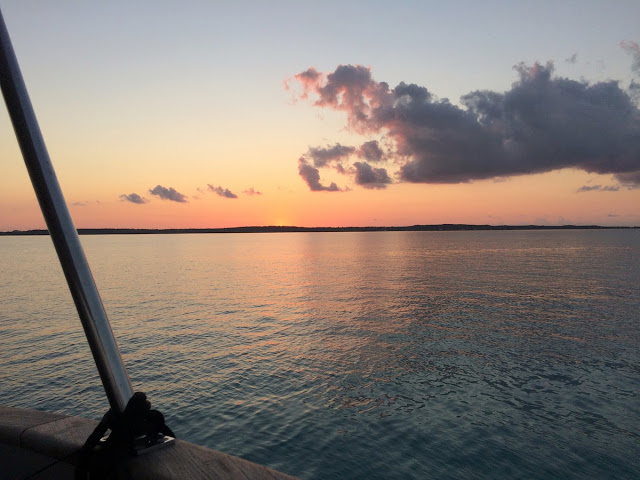 The next morning, David and I left early to go diving with one of the local dive shops.  It had been a year and a half since we had been diving, due to pregnancy and a baby.  We were both excited to get back into diving.  The first dive site was pretty good, pretty coral and fish.  But the 2nd dive site was quite surgy, and there wasn’t too much to see.  It was a shallow dive and reminded me that we could easily do shallow dives without a guide, we were capable of going just together.  So we planned to do that—in the Abacos.

When we returned to the boat, we asked the kids what they wanted to do with the rest of the day—more pink beach, walk the town, a beach near the boat,… their response—stay on the boat and play games.  So the adults voted to go for a walk in town.  So we put the little 2 down for their naps, and off David, Brittany, and I went to town for a walk.  Dunmore Town, is a cute little harbor village.  There are pretty cottages and shops, and several different churchs—one of which was having a wedding.  The local friends and family were there, all dressed up to celebrate.  We checked out the small grocery markets, looking at food and prices. 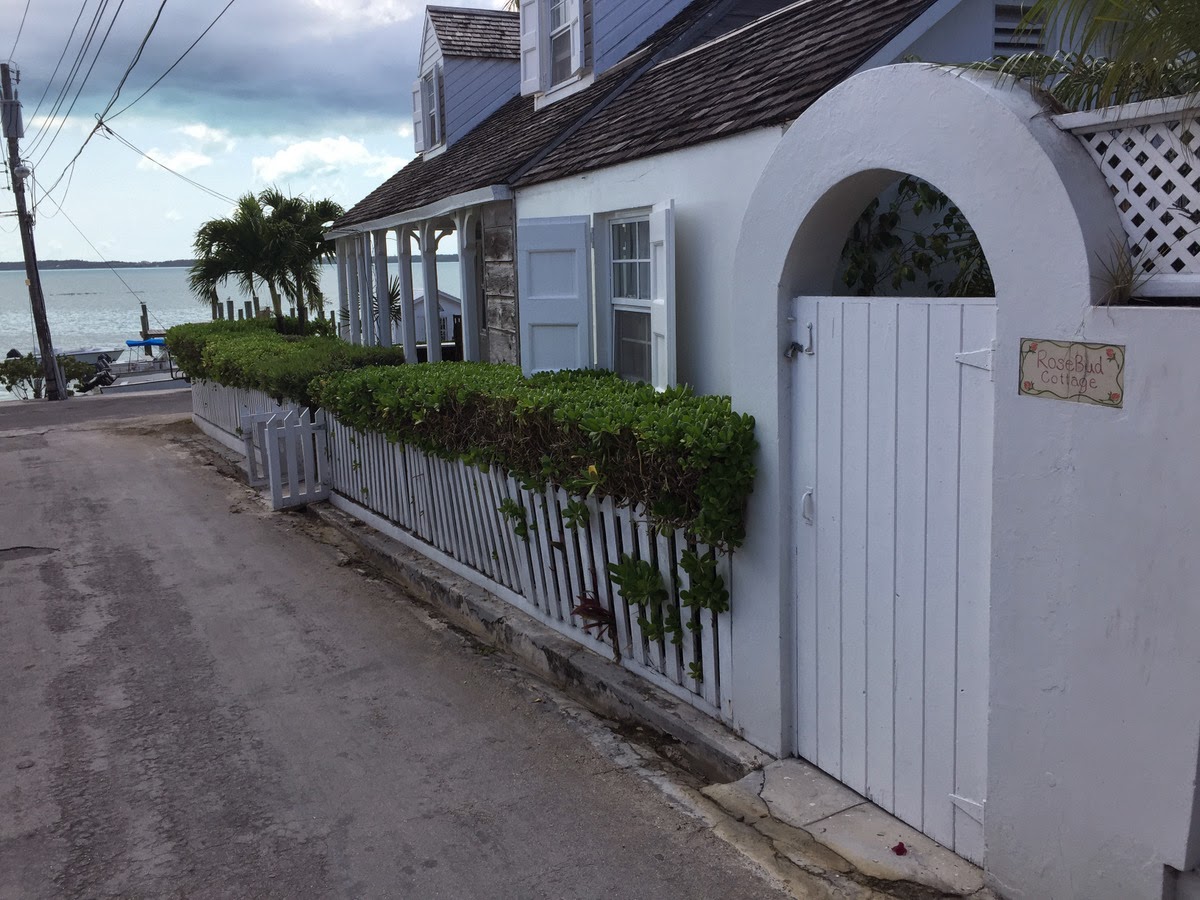 We headed back to the dock to go back to the boat, but sat on a bench for a bit.  It felt nice sitting in the shade.  While there, we watched 2 jet skis driven by local teenagers pull up to the dock.  A man climbed off the back of one of them, fully dressed in jeans and a polo shirt.  I just had to ask—how did he stay dry running around on jet skis.  So we started chatting with him.  His name is Managold.  He has lived his whole life on Harbour Island.  He, and his brothers own a construction company there.  They build homes—ok, homes that cost more than 8 million dollars.  WOW.  That I far out of my price range.  David asked him how he came to build such expensive homes, and Managold said – By doing it right the first time, and the word spread.  How true is that.  Do it right the first time.  We enjoyed talking with him.  He asked about our boat, and where we were anchored at.  He remarked that we had come to the island at the busiest time, and how crowded it was.  But from our trips to shore—we didn’t think it was crowded at all, but it was for him.  He said all the restaurants were busy and you needed reservations.  I asked him where his favorite place to eat was, and he told us about Aquapazza.  He introduced us to his kids on the jet skis before the kids took off.  He told us his son was visiting for spring break.  He is 17, and home from school.  He is a senior in high school, and has spent the last year and a half at a school in Virginia.  This will help him get into college.  His 14 year old daughter goes to an island school on Eluthera.  She comes home on weekends, but lives at the school during the week.  She has been going there since she was 8.  Oh how hard that would be, sending your kids away to school.  But for them, they feel like they are giving them a better chance for the future, then the local town schools.  We really enjoyed visiting with Managold.  He even stopped by the boat a little while later to check it out.  We were planning to leave Harbour Island in the morning, the weather looked perfect for a trip to the Abacos, otherwise we would have enjoyed spending more time with Managold.

For dinner that night, David and I took Managold’s recommendation, and went to Aquapazza for dinner.  Luckily they had a table for the 2 of us at the early time we went.  Had we shown up a little later, I think we would have been turned away, as all their reservations came and the tables filled up.  We were able to watch another beautiful sunset from our table, the sky filled with pink.   I think I would like to come back to Harbour Island and spend more time. 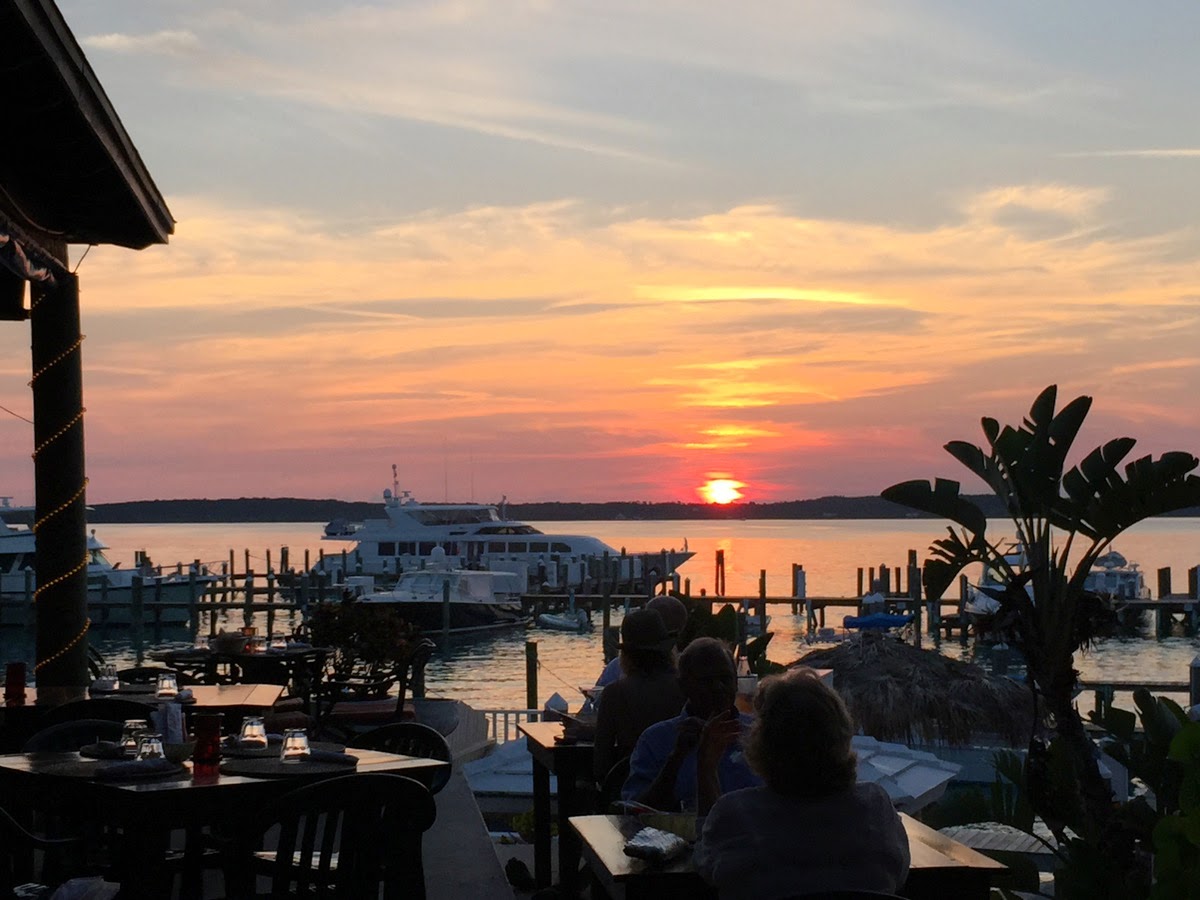