Little Hall's Pond and running aground 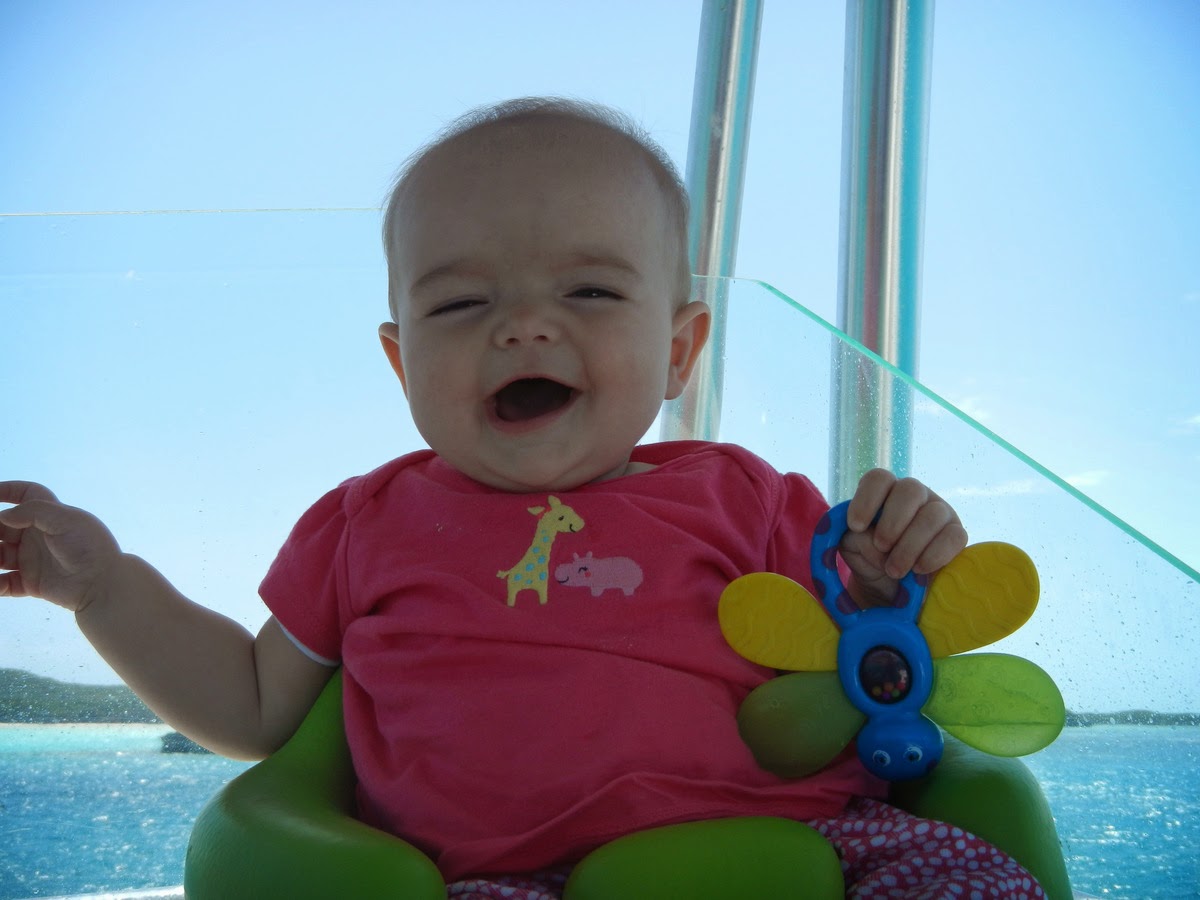 We left Shroud Cay and headed south.  We thought we would try and anchor near Little Halls Pond Cay, owned by Johnny Depp.  We pulled up the west side of the island and went to pull our tender in tight before heading up the narrow channel to where we planned to anchor.  In the process of pulling in the tender we drifted in the tidal current, and drifted over to the shallow sand where the current shoved us into a shallow finger.  Just as I noticed the drift, and attempted to move us away from the shallow hoping no fingers were caught in the tender ropes, the shallow ground grabbed our stern, and swung us around and trapped us.  We were aground!  David didn’t quite have the tender tied up yet and it started drifting in the current alongside the boat.  Lines were tangled and it became a chaotic situation.

We were stuck in the shallow sand.  There were tangled lines hanging in the water, so I couldn’t try using the engines to pull us out.  We definitely did not want to wrap a prop with a line.  And the tender was bumping into the boat because it wasn’t tied up.  David climbed into the tender and was going to try using it to help pull us out of the sand but we had to get the lines untangled first or the tender wouldn’t pull straight.  I ran down to the back deck to help Calvin and Savannah who were working together to try to untangle the lines.  Instead we undid the lines so that only the tow line was left attached between the tender and the boat and we were able to just pull the rest of the lines in.
David then tried pulling us off the sandbar from the stern but as he did that I could feel our bow turn more into the shallow sand.  I tried reversing as he pulled on us, but still felt it was pushing our bow into the shallow.  I even tried using our bow thruster to help move our bow towards the deeper water.  I suggested we try attaching the tender to the bow of the boat and pull that way.  But we decided to try David pulling on the stern towards deeper water, with me using the engines to go forward rather than reverse.  This time it worked and we were free of the shallow water.

I maneuvered the boat once again to face into the current, this time staying in gear, while David tied the tender upto the boat and the kids pulled the tow line in.  The current was tearing along that keeping us in gear with one engine pretty much just held us steady in place.  We did not move forward at all with the opposing current.  We were quickly tied up, and headed further up the island to a find a good anchor spot.  It took a couple times for us to get our anchor to grab the sand where we picked to stay, but finally it held.  We settled in for dinner and the evening.  I was still feeling a little overwhelmed from running aground.  The winds were blowing a good amount and that only added to my nerves.  They were also creating a little chop on the water which made it so an easy calm swim to and from the beach wasn’t possible.

The next morning with the winds still blowing away, we decided to anchor on the other side of the island for a few snorkel trips and then move on a little further south.  We dropped anchor, still in the current, but a little calmer of a spot.  Everyone had finished school work and was ready to snorkel.  Except Savannah.  She opposed snorkeling these sights.  This would be our 3rd time snorkeling this area, so I can understand her protest.  We were snorkeling a site called the “Aquarium”.  It’s a tiny grotto with plentiful fish and coral.  It is a great snorkel site.  There is a little current there, but with a rope tied to our tender it’s easy enough for all our kids to snorkel.  And with all the colorful fish there, it is rewarding and keeps even our 4 year old interested for a little bit.  I even coaxed the 2 year old in to take a peak under the water at the fishies with his goggles. 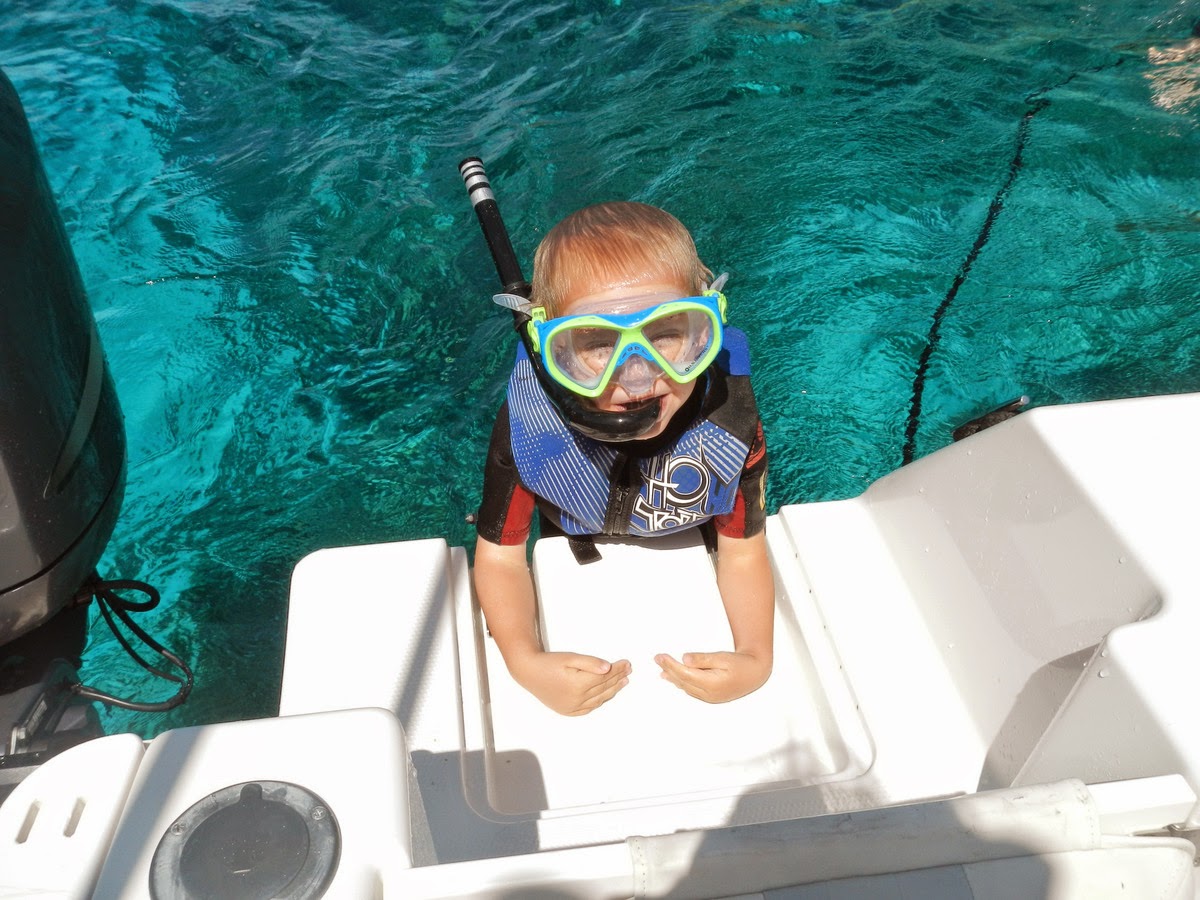 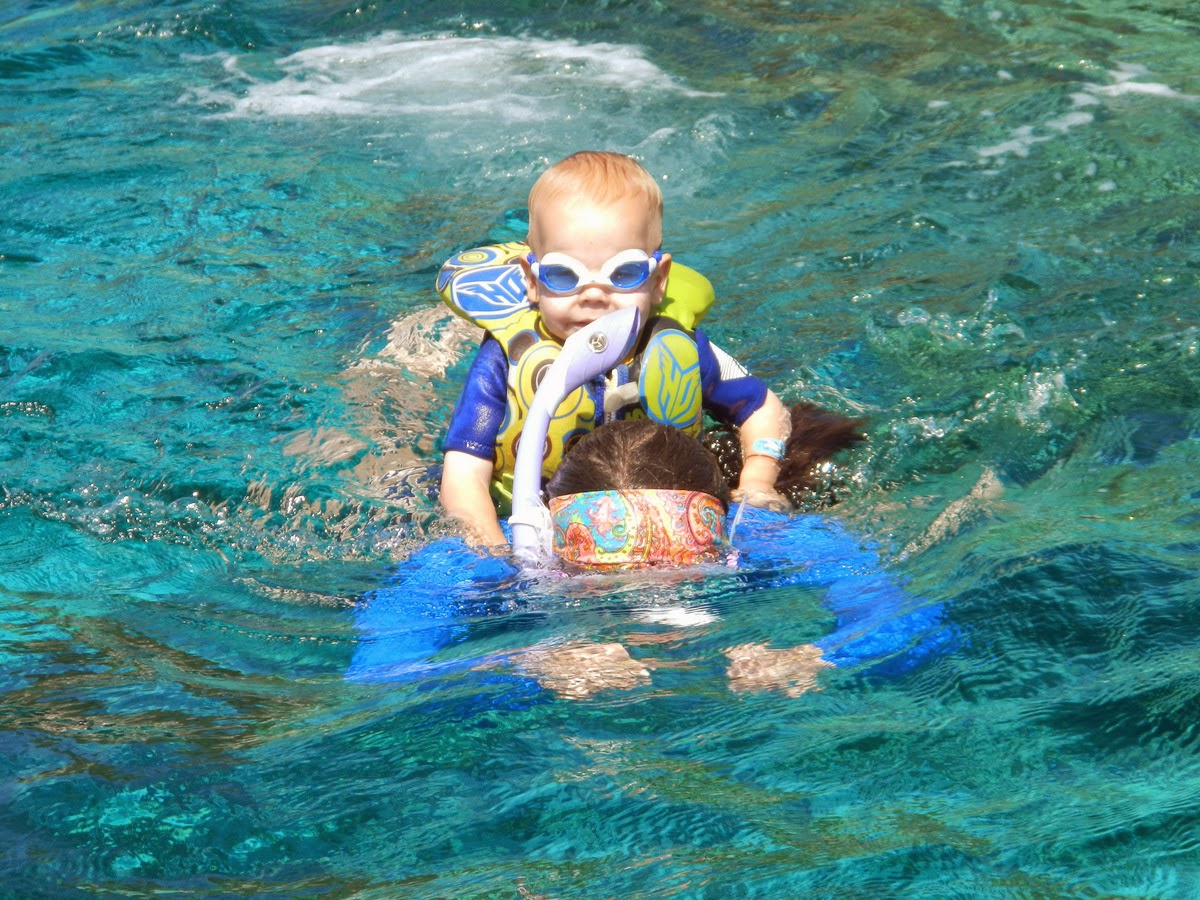 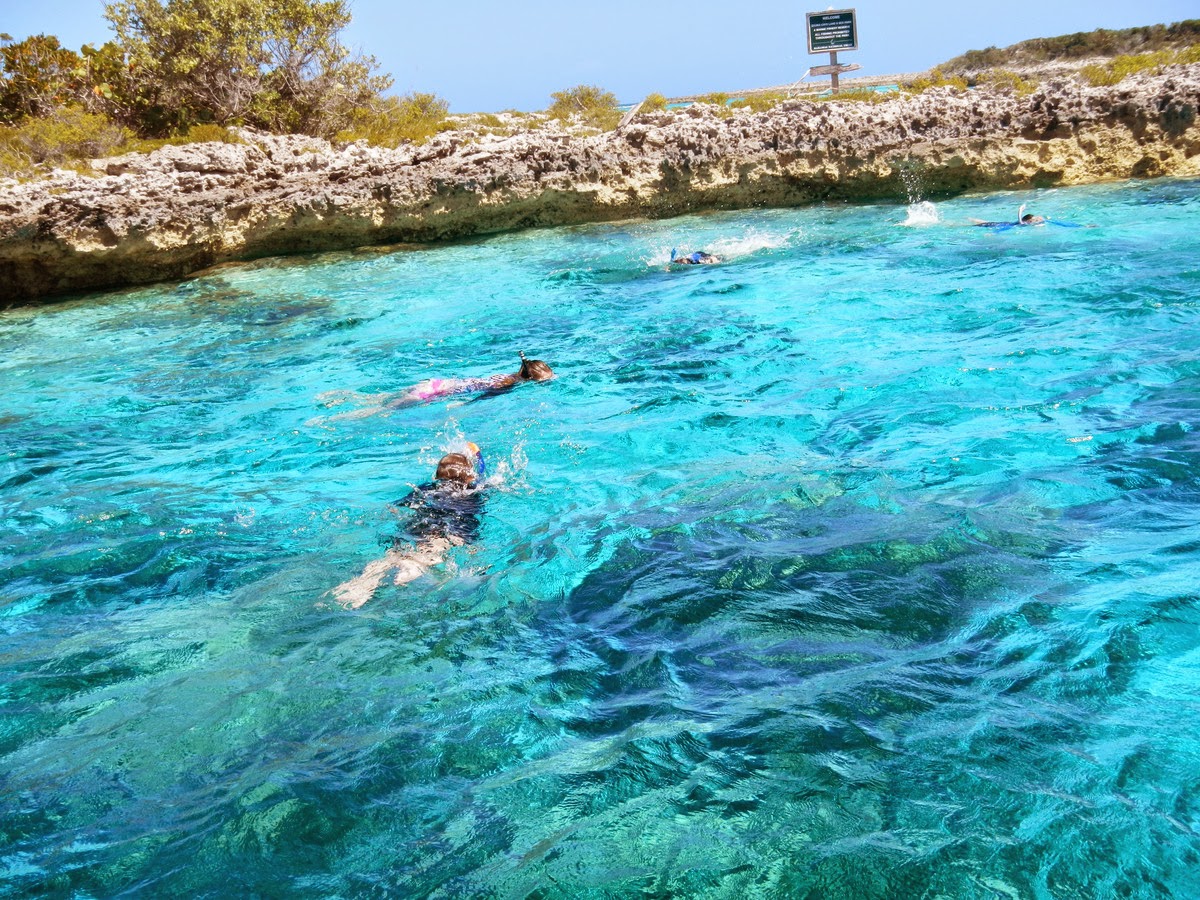 After the aquarium site, we went to see a submerged plane that had crashed in the water.  It is a little 2 seater plane.  The reef and coral around the plane are pretty and fun to snorkel as well.  Calvin and I swam around for a bit, while the other kids were done after looking at the plane. 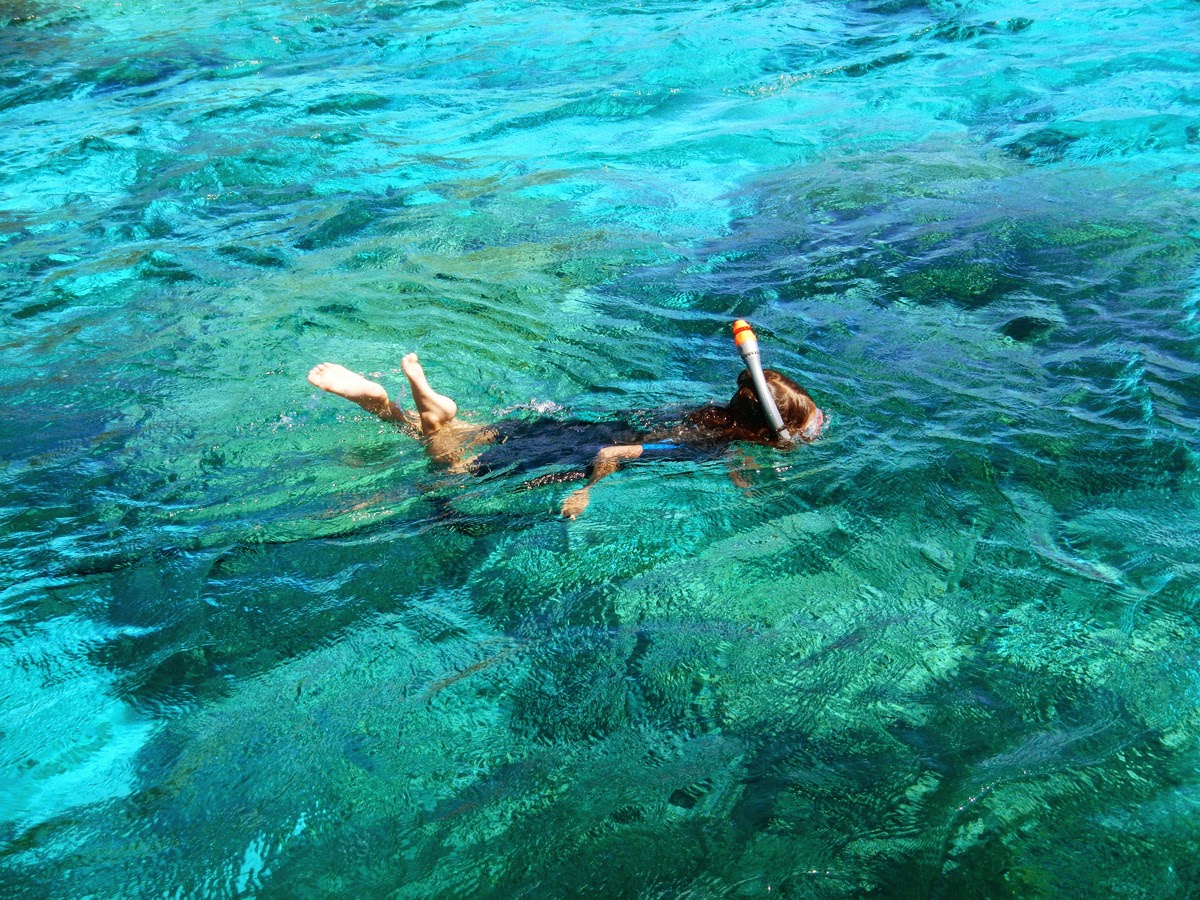 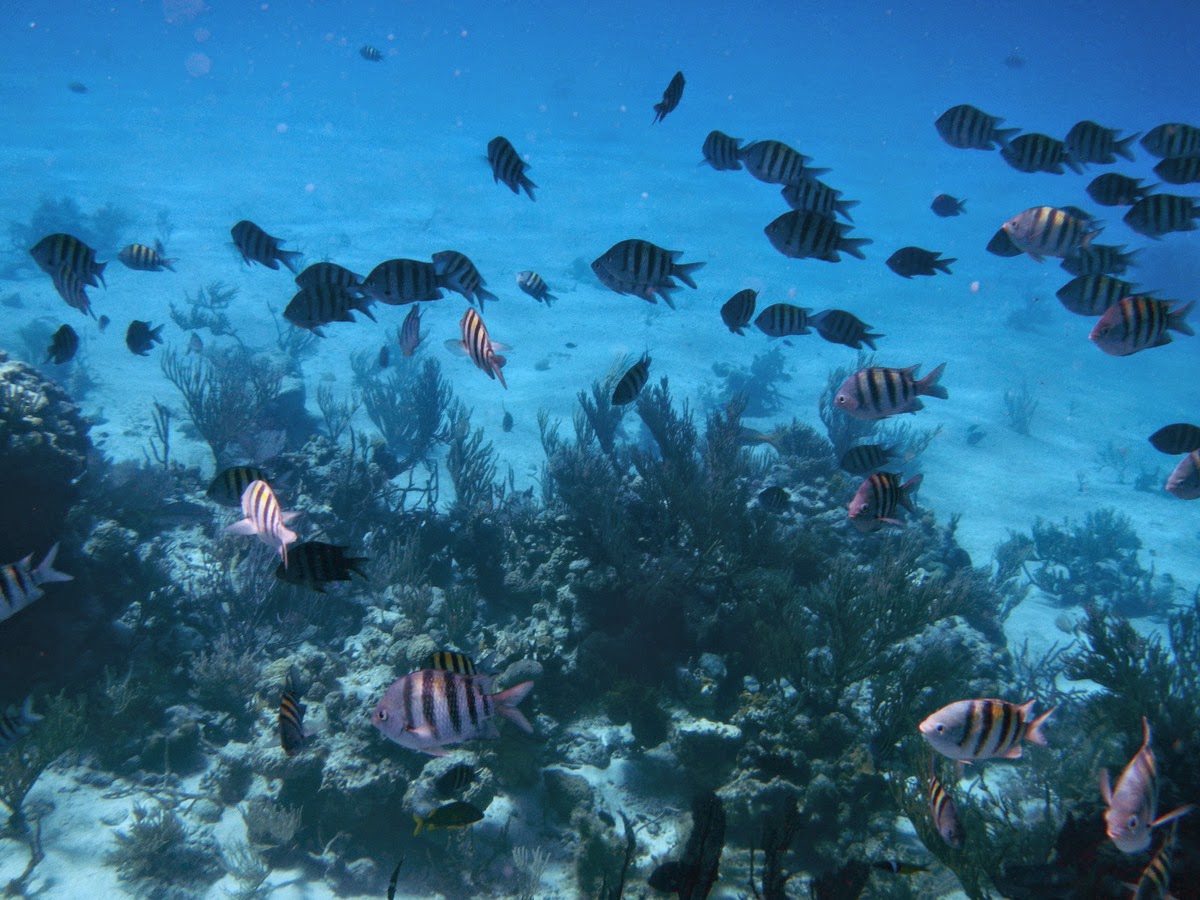 Back on the boat, after everyone washed up and changed back into dry clothes.  We pulled up anchor and headed south.  We checked charts for a good anchorage that would protect us from the slight swell running up the islands from the south.  The normal east winds had shifted slightly south, sending a swell running into most anchorages in the Exumas.  We decided to head into the Pipe Creek area, near Thomas Cay.

We have not ever anchored here, but have tendered thru the area.  It is beautiful and very protected from all sides.  But it is narrow with a shallow entrance with rocks and coral.  After the excitement at Little Halls Pond the day before, and running aground in the sand, I was definitely nervous about this area.  We made it through the shallow area around Thomas cay, and then needed to pull the tender in.  The current was ripping thru the nearby cut.  We pulled out of the rip area, and were able to easily, smoothly pull the tender in without issue.  One problem down.  Now to head into the anchorage area and see how it goes.  It was low tide, and I was worried we’d hit bottom on our way in.  Not at all, we made it over the tight shallow area with no problem, and headed a little further in to drop anchor.

I was happy to see there was only one other boat.  I get nervous in crowded tight anchorages.  We picked a spot in 7 feet of sand and dropped the anchor.  Just then, a call came over the radio “RCABIN, RCABIN”  It was the other boat hailing us.  After a quick conversation on the VHF, we picked our anchor  up to move slightly more north.  They had out a lot of chain, so to stay out of their spin range, we moved another 75 feet north of them and laid out our chain… less than theirs.  I asked them why so much chain, and they felt the tidal changes, 4 times a day, necessitated more chain.  Maybe it does for them.  For us, we lay out our anchor, and use a 5 to 1 ratio for the amount of chain.  In this case, we put out a little more, about 45 feet all together.  Then we back down on our anchor, meaning we reverse and pull on it with our engines.  If that holds, then we rev our engines up a little, both engines to 800 rpms.  If that holds, we call it good and set.  We still use an anchor alarm for “just in case”.  Should our anchor flip and not dig back in, we want to know so we don’t drift away to somewhere we don’t want to be.  We feel the amount of force we apply to anchor to set it, is more than sufficient to hold us.  We like to sleep well at night, and not worry.  However that doesn’t stop either of us from checking if we awake in the middle of the night. They were here first, and that is the rule of thumb.  They were here first, so we have to anchor around them and stay out of their way.
After we set our anchor, a call to us came over the radio again.  The other boat, was concerned that we were maybe aground.  In setting our anchor, we stirred up the sand below.  It’s shallow, so running our engines, pulling on our anchor stirs up the sand.  They thought maybe we were aground.  We assured them we were not, but just making sure the anchor was good and set so we wouldn’t be running into them tonight.

Again, we arrived at our destination just before dinnertime and sunset.  It was nice to sit down and enjoy dinner in a very calm spot, could hardly tell we were floating on water