The forecast was showing about 5 more days of fantastic light winds from the south.  I was planning to stop at another 1 or 2 anchorages along Eluthera’s west coast, but there were few anchorages that provided much shelter from south winds and swell.  And the area we most wanted to visit was at the Northern tip of Eluthera, so we decided to head straight there the next day.

The water was perfect to travel on, and much of the water off Eluthera is a beautiful light blue, unlike the green/blue inside Rock Sound.  We had a pleasant day traveling up to the North end.
Just as the tide switched and began to rise, we arrived at Current Cut.  This is a narrow passage between Eluthera and Current Island.  The current running thru this narrow passage has been reported to reach between 5-8 knots at full flood.  From what we had read, boats plan when they will travel thru this cut.  We had hoped to arrive and find it at slack tide, or near slack.  The tide had switched earlier than we were expecting and the current was running against us, which was still manageable.  We pulled the tender in before approaching the cut so we wouldn’t need to worry about it should something go wrong and we get set on a sandbar.  But after reading over all the concerns of the cut, it wasn’t too bad.  The current was swift, but we made our way thru just fine.  So David said, let’s anchor the boat nearby and go snorkel thru the cut.  Now was the time to do it as we were still heading a few more miles north today.  So we pulled up to shore a quarter mile north of the cut, out of the tidal pull, and loaded the 3 older kids into the tender and off we went to snorkel the area.  The current had picked up and looked a little rough at the north west mouth of the cut.  I was nervous.  The winds were light, so that helped, but the ripples created from the swift current still made me nervous.  I’m a great swimmer, but getting tossed around into rocks, is not my idea of a good time.  After watching how the water runs thru the cut, and not slapping the rocks I felt a little more confident.  The kids and I got ready to all jump at the same time so we could stay together to drift.  David put the boat in neutral, and off we went.  I put my head in the water, expecting to see great things, and…. I saw nothing great.  Just the bottom, 20 feet below, covered in algae.  We were drifting along at a fast pace, and that was kinda fun.  We swam a little closer to the northern shore of the cut, and started to see a few fish, and then I saw a whole group of Eagle Rays!  6 of them, all together.  They seemed to be held in place, even though they were swimming.  They were swimming up current, but because it was so quick, they were virtually not moving forward.  They were beautiful to watch, and then we drifted further.  The girls had drifted ahead of Calvin and I, so we had to go catch up.  We found them counting turtles below them.  10 or so turtles were swimming around, like the eagle rays, up current, which kept them mostly in place.  Isabel was so excited to see them, she would scream, and scare them off. 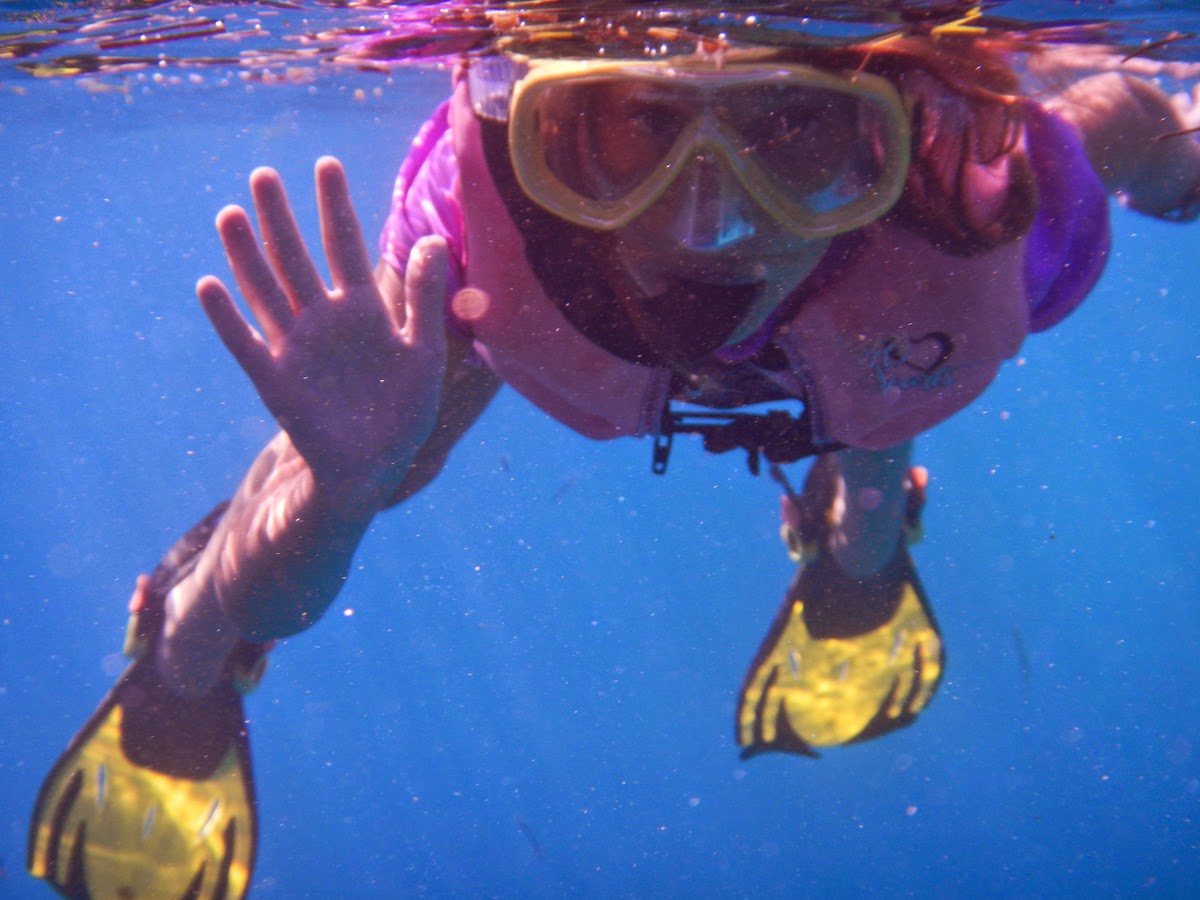 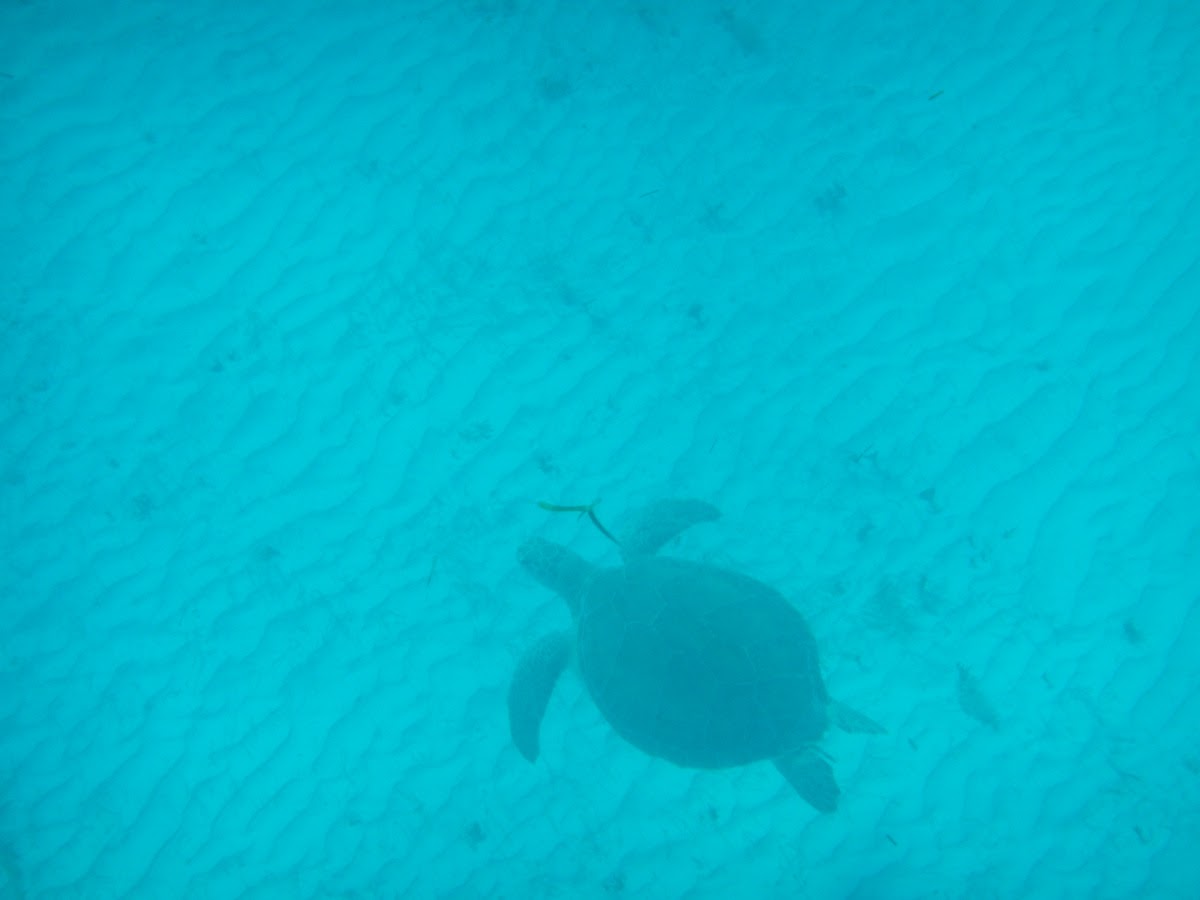 David picked us up on the other side of the cut.  Now it was David’s turn to go with the kids.  I tried to drop them on the south shore, but the quick current was making me nervous driving the tender.  So I did my best, but they mostly ended up in the middle, and so they choose to drift the northside again.  While I was drifting in the tender, I watched the speed rise to 5knots-- that is a quick current.  A fast boat was approaching from the other direction and I had to cut them off to get them to slow down so they wouldn’t run over my snorkelers.  We keep a red flag up while snorkeling, and I waved it at them hoping to alert them, but when they didn’t slow, I had to move directly in their path as they neared, to get them to slow. I don’t usually drive the tender, so while David would have handled this smoothly, it had my heart racing.

I picked them up on the other side of the cut, and David wanted to go again closer into shore, so I took them back to the other side and dropped David and Calvin closer to the shoreline, after 2 trips through, the girls were done snorkeling.  This time, David and Calvin were able to see all the eagle rays, the turtles, and more fish as they stayed closer to the shoreline.  It was a fun, heart racing, snorkel trip.

Back at the boat, we changed, pulled up the anchor, and headed our last few miles to a better, calmer anchorage off of Meeks Island.  We arrived and set the anchor just as the sun was going down.  It had been a great day.