It sounds scary, doesn't it?  The Devil's Backbone.  That's what they call the reef on the North side of Eluthera's cays.  Our next stop was Harbour Island, on the East Side of Eluthera.  To get there, you have to go thru the Devil's Backbone.  Our research and cruising books suggest you use a local guide to pilot you thru the area.  But further research and reading suggested that if conditions were good, and you are capable of reading water -- meaning spotting coral, and shallow shoals, then you will probably be just fine going on your own.

So first we reviewed weather and tide conditions.  Winds had been light for several days, and out of the south west.  Great.  High tide was late morning, Great.  Which meant traveling the area at mid day with the sun high over head, would be a good time to go.  Of course we consider ourselves capable, so we planned to make a go at it. 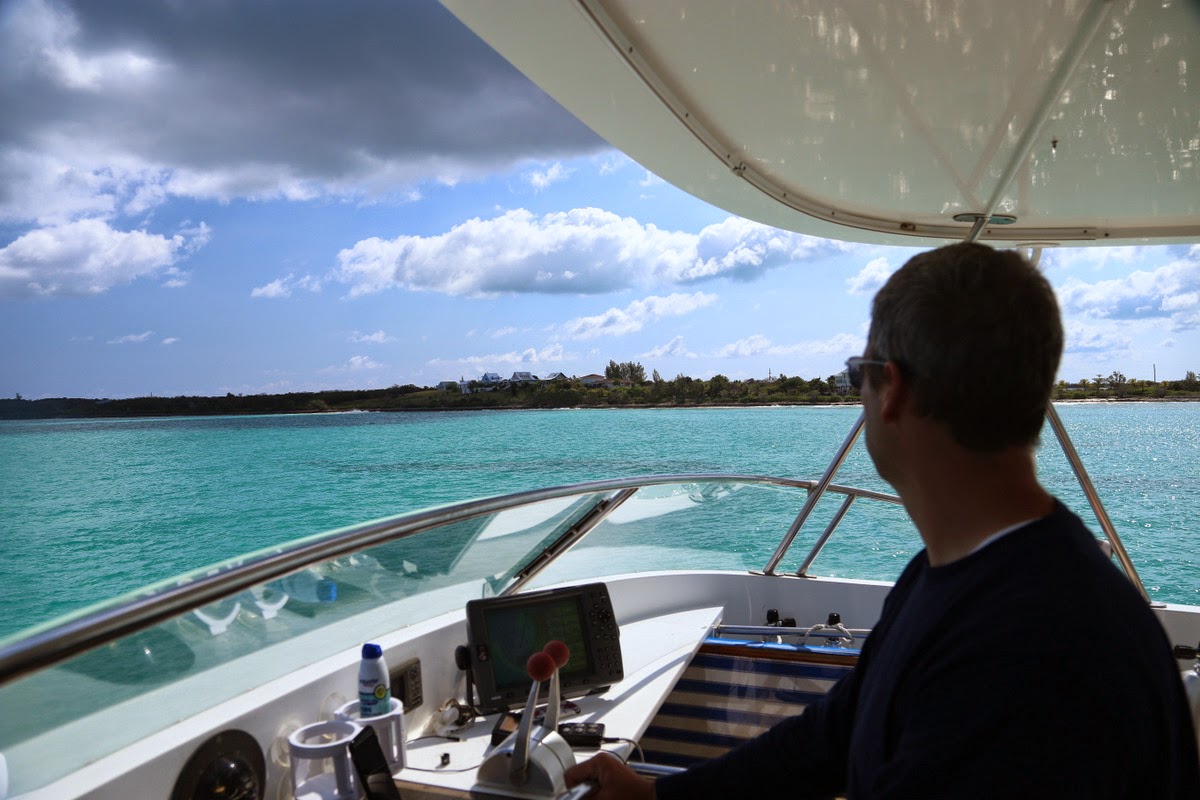 We pulled up anchor mid morning and made our way thru the main channel of Spanish Wells to the other side.  Usually we tow the tender out behind us a hundred feet or so, but that limits our manueverability, so with no wind chop it would make it easy to tow on the hip, next to us.  So that was our plan.  Then if we needed to reverse or spin, or whatever, we wouldn't need to worry about tow lines in the way and catching our prop. 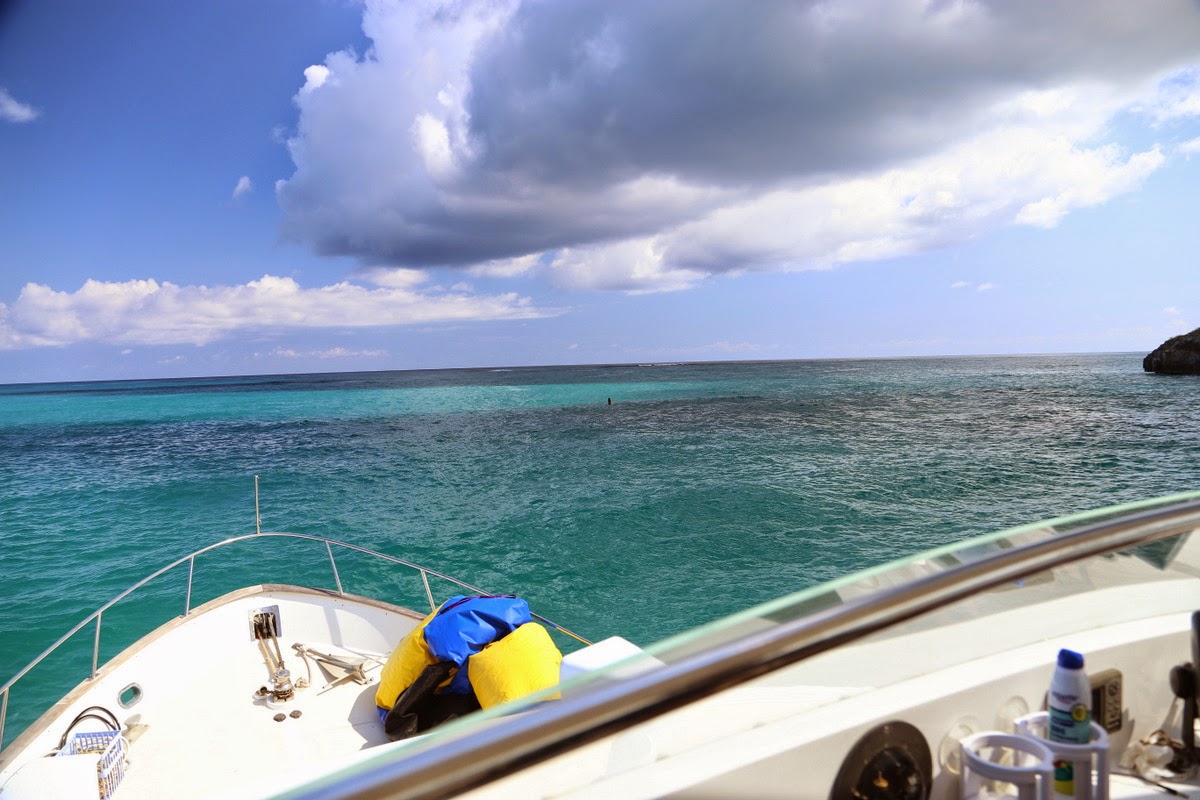 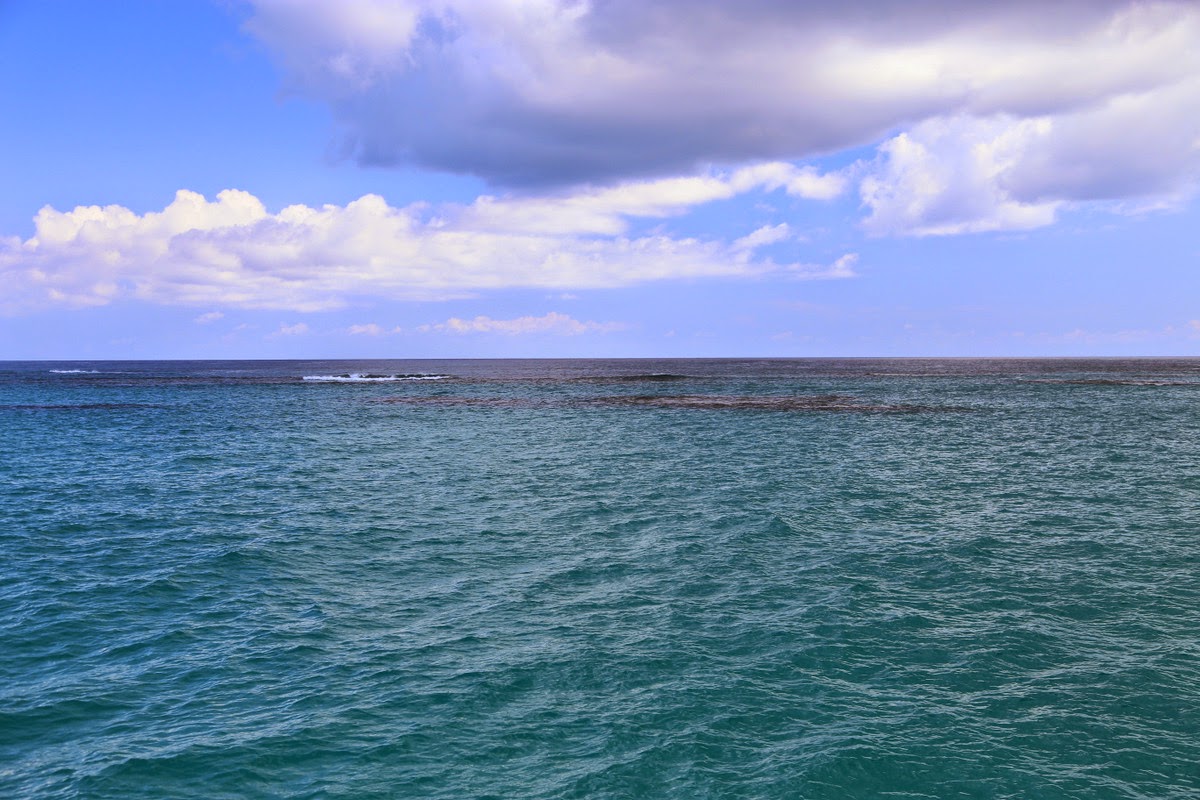 The sun was up and shining on the water, and we rounded the north end of the islands, heading to the reef.  The "safe" path is between the reef and shore, and sometimes that path is very close it the reef, and sometimes it is very close to shore.  While the winds were light, and there was no chop on the water, there were still swells from far off storms rolling in.  The good news is these swells are nice and calm and gathered and far apart.  However, they were quite large, around 5-6 feet in height, 10-12 feet wide.  This helped us see where exactly the reef was as these big waves would crash as they met with the shallow reef.  We made it easily thru the first set of reef know as Ridley's Head.  There was a pass out to deep waters between Ridleys and Devils Backbone the reef to head north. 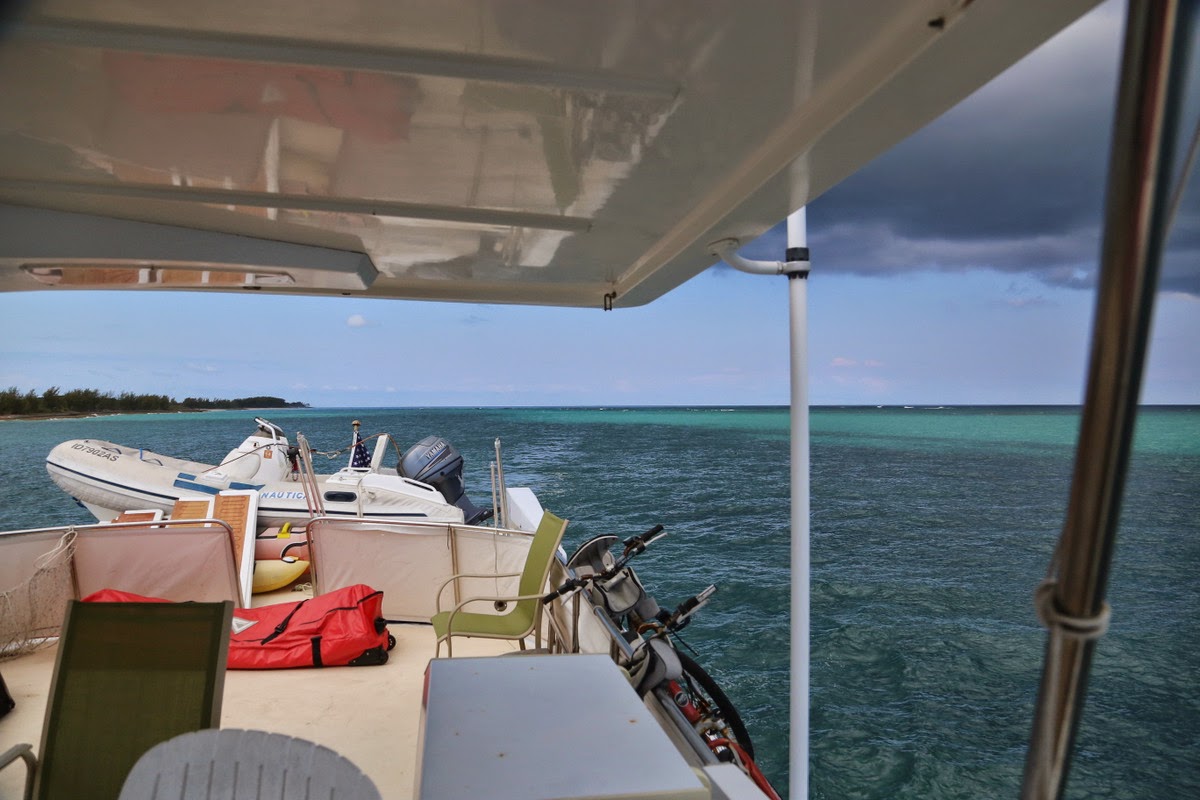 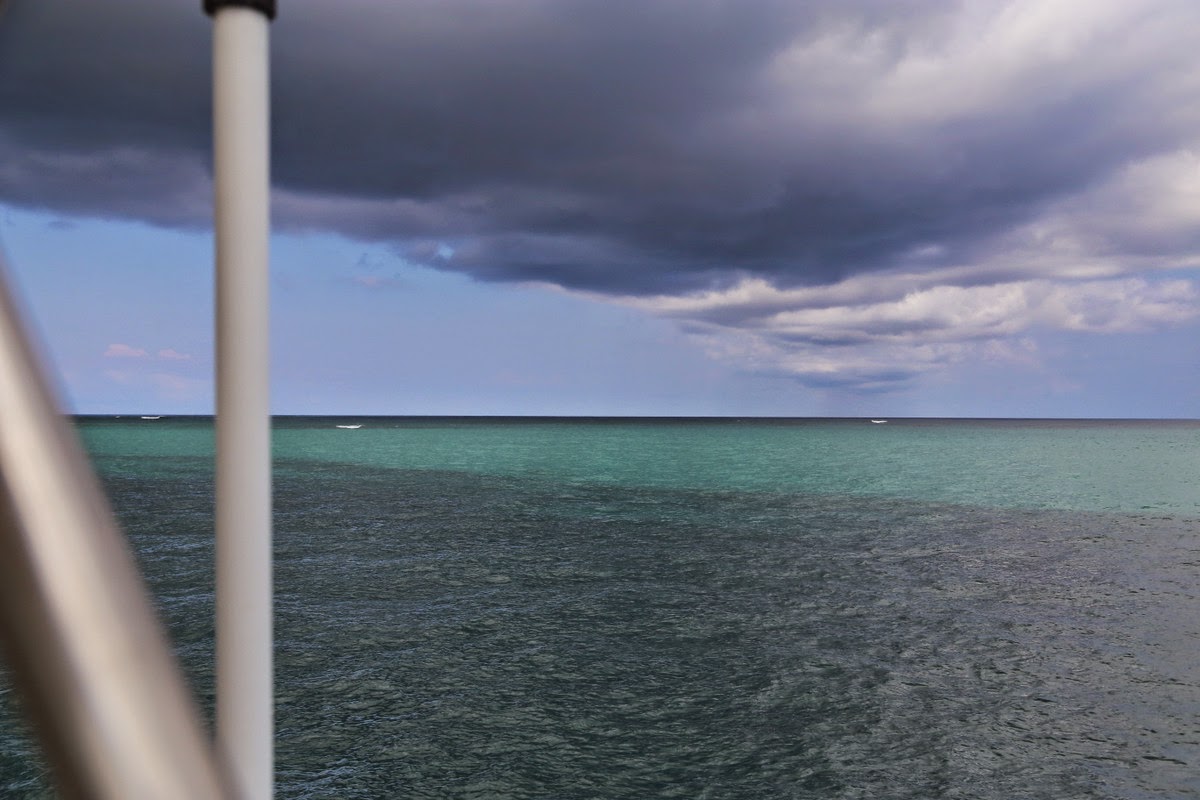 Just as we reached this area, a big dark cloud blew in overhead.  While it wasn't going to rain on us, it was blocking our lovely sunlight to help us see the coral below.  We followed our navigation charts and watched depths.  We could easily see  the breaking reef, but it was now more difficult to see what might be lurking in 3-4 feet of water.  We could still make out some spots as we neared them, but not as soon as we would like.  It's nicer when you can spot them from a distance rather than close up.  Also as we reached this area I noticed a large ferry boat coming towards us thru the Devils Reef area, so we circled back to the deep open section to wait for the ferry to come thru the pass.  We weren't interested in trying to pass the ferry thru that tight section, especially not having taken this route ever before.  I was hoping this would give more time for the dark storm cloud to clear out, but nope-- it hung over as it was now our turn to head between the backbone and shore. 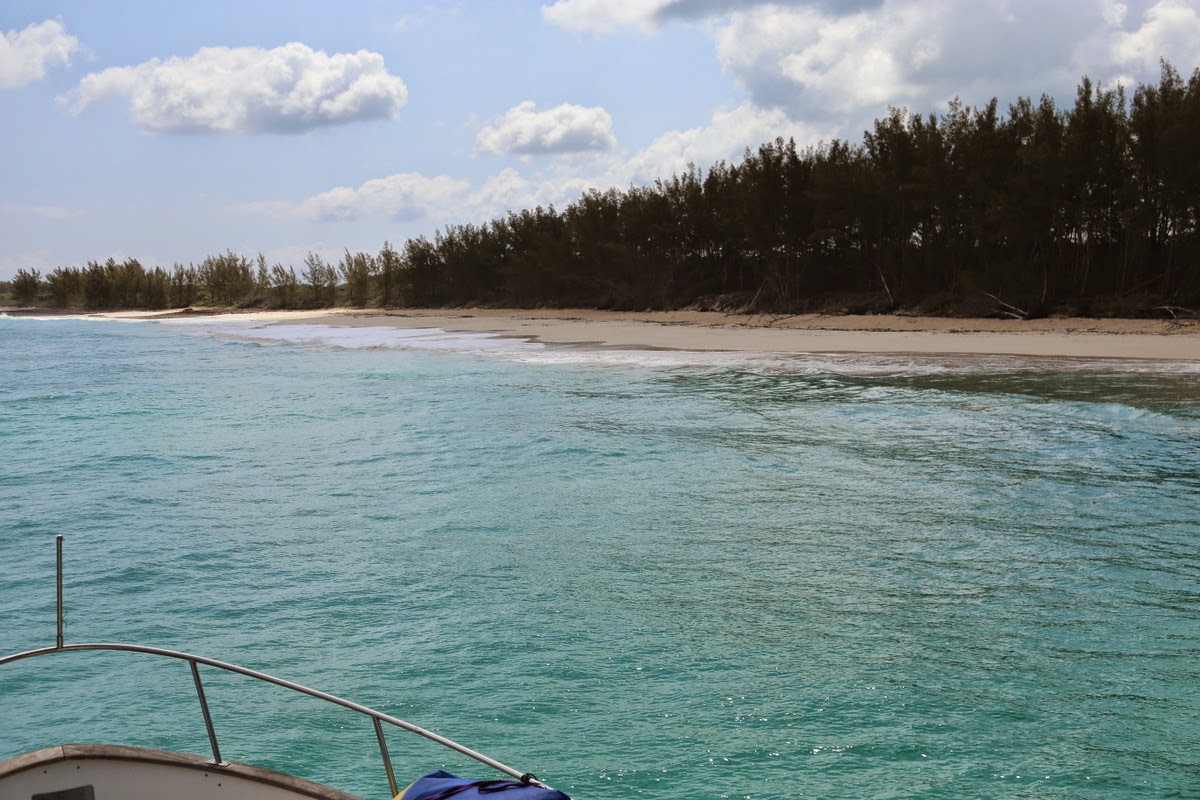 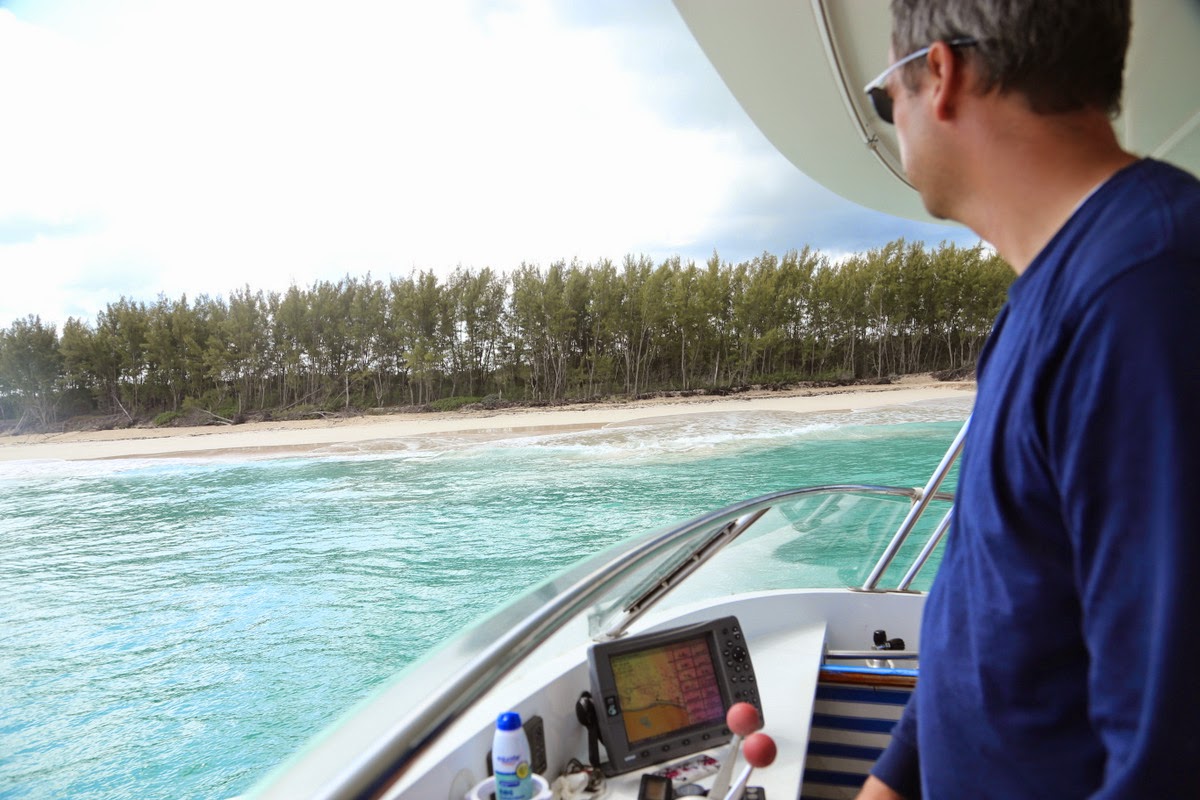 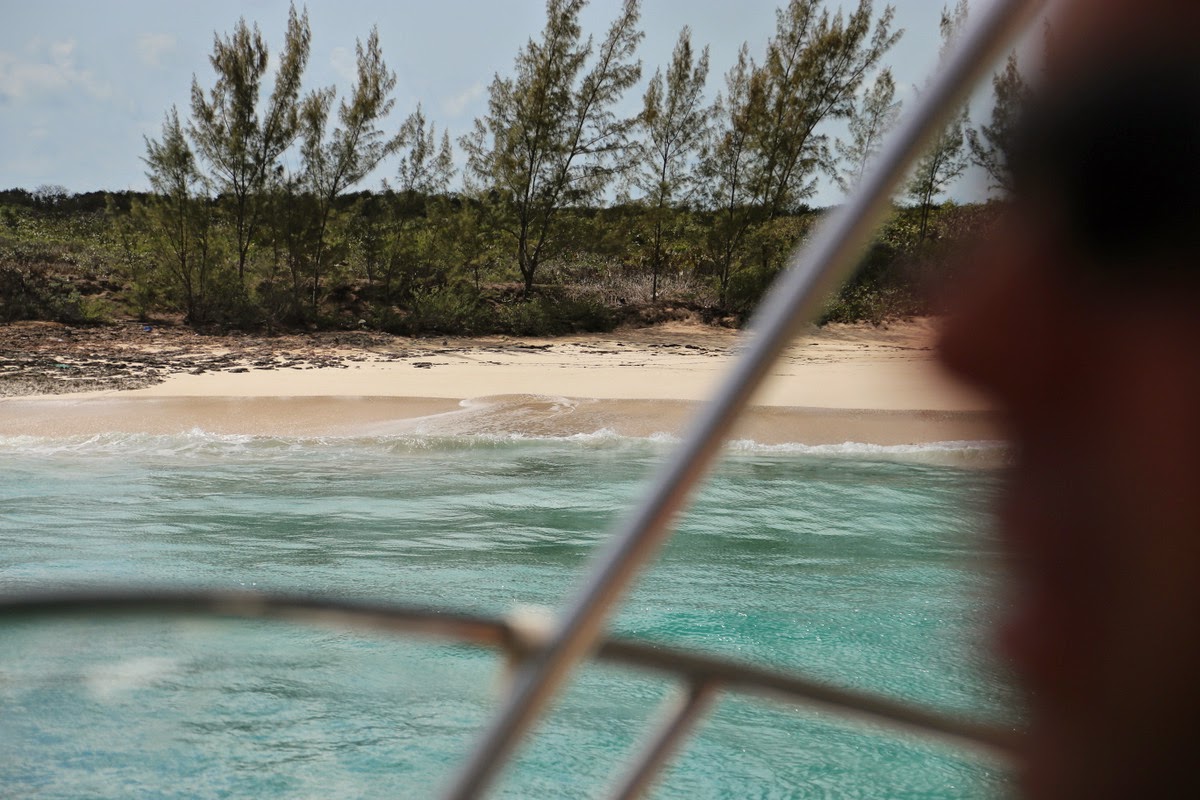 And by shore, I mean-- hello beach-- less than 100 feet away, with swell rolling into it.  We love to anchor near shore, and we have traveled close to shore many others times, but this was close, and I was worried one wrong swell-- and we'd be on the beach.  It's happened... we read a rumor of an 85ft boat--using a local guide, ended up on the beach, 2 years ago. 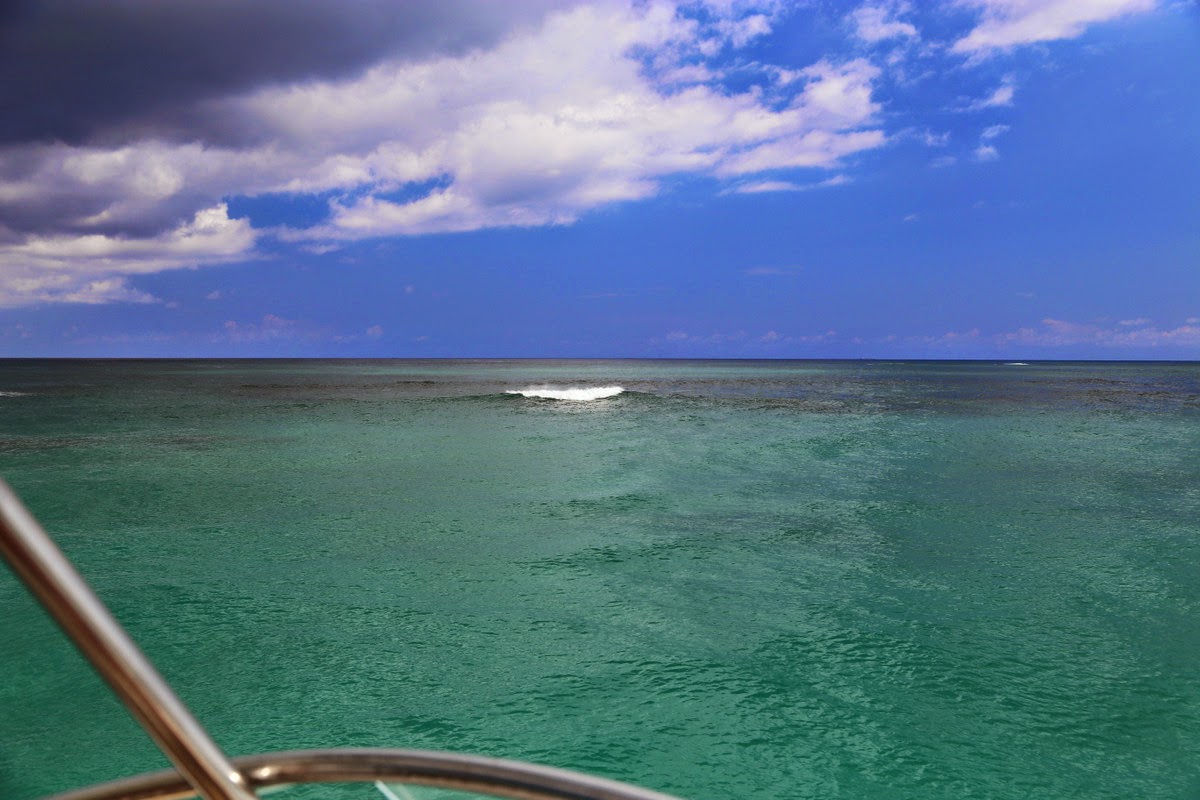 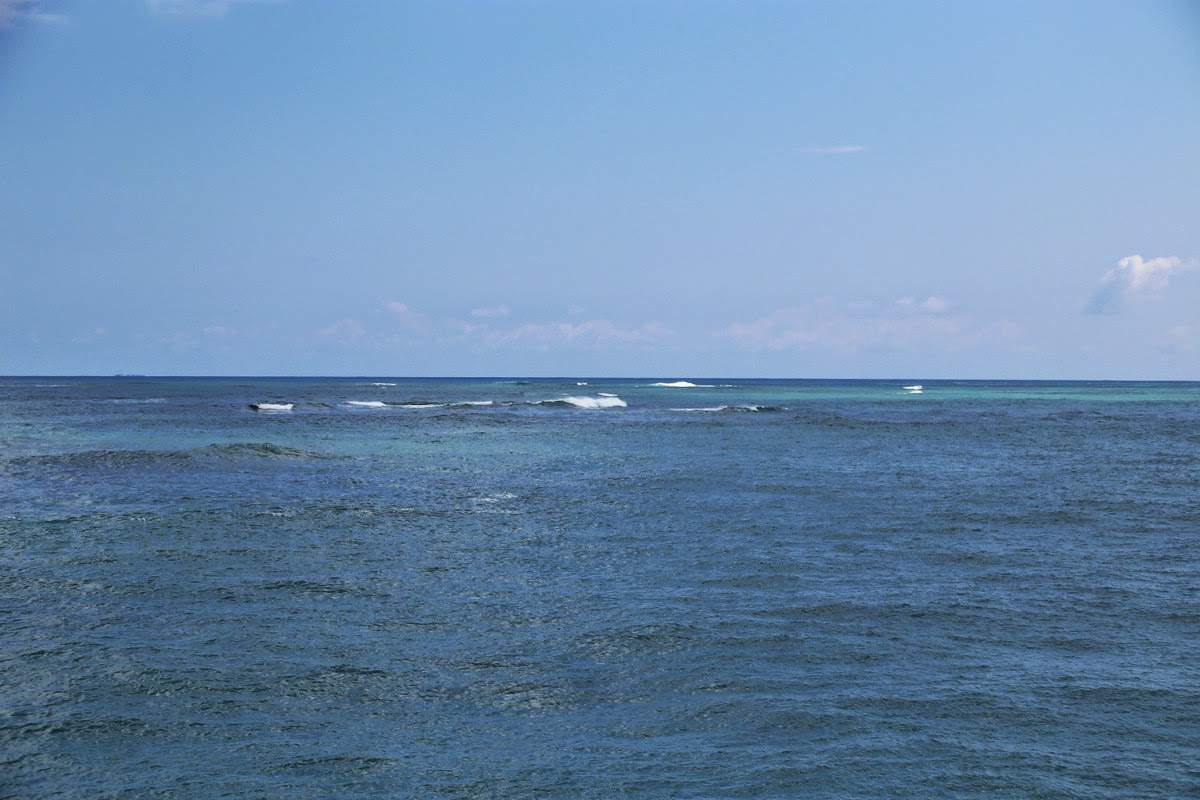 Lucky for us, we only had a couple more miles to go, and we were thru.  It was definitely a passage to get the adrenaline pumping, and it would have been much nicer to have full sun over us, but I think we could do it again just fine.  I'd be nervous again... but as long as conditions were good, we'd be just fine. 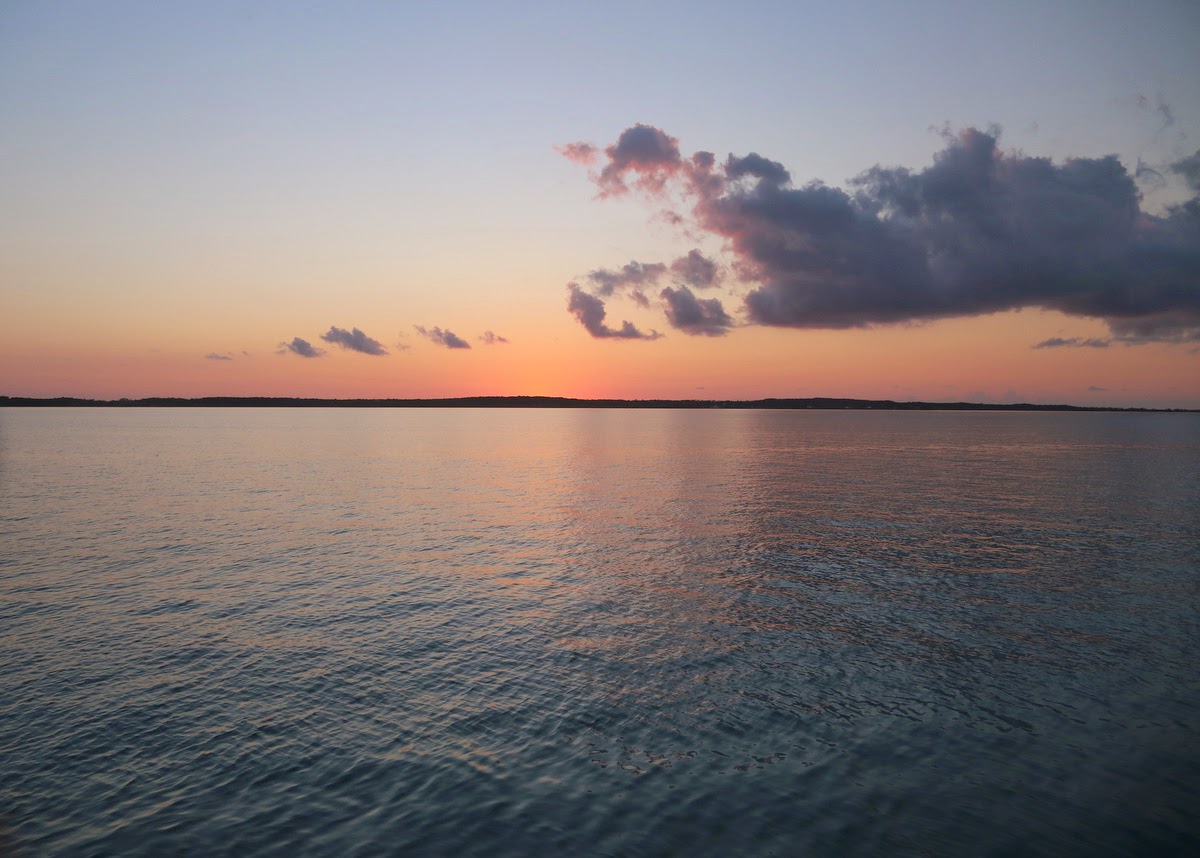