Two years ago, when we passed briefly thru the Exumas I wanted to go to Shroud Cay.  But the north winds were blowing like crazy, which made the anchorages there untenable.  We day anchored at a small island nearby just to tender thru a creek on the north side of Shroud Cay to see the Eastern Beach, and hike the hill to the top.  It was a wet ride to the peaceful creek, but the sight at the end of the creek still lived in my memory.  It was beautiful...  2 years later, we had to go back. 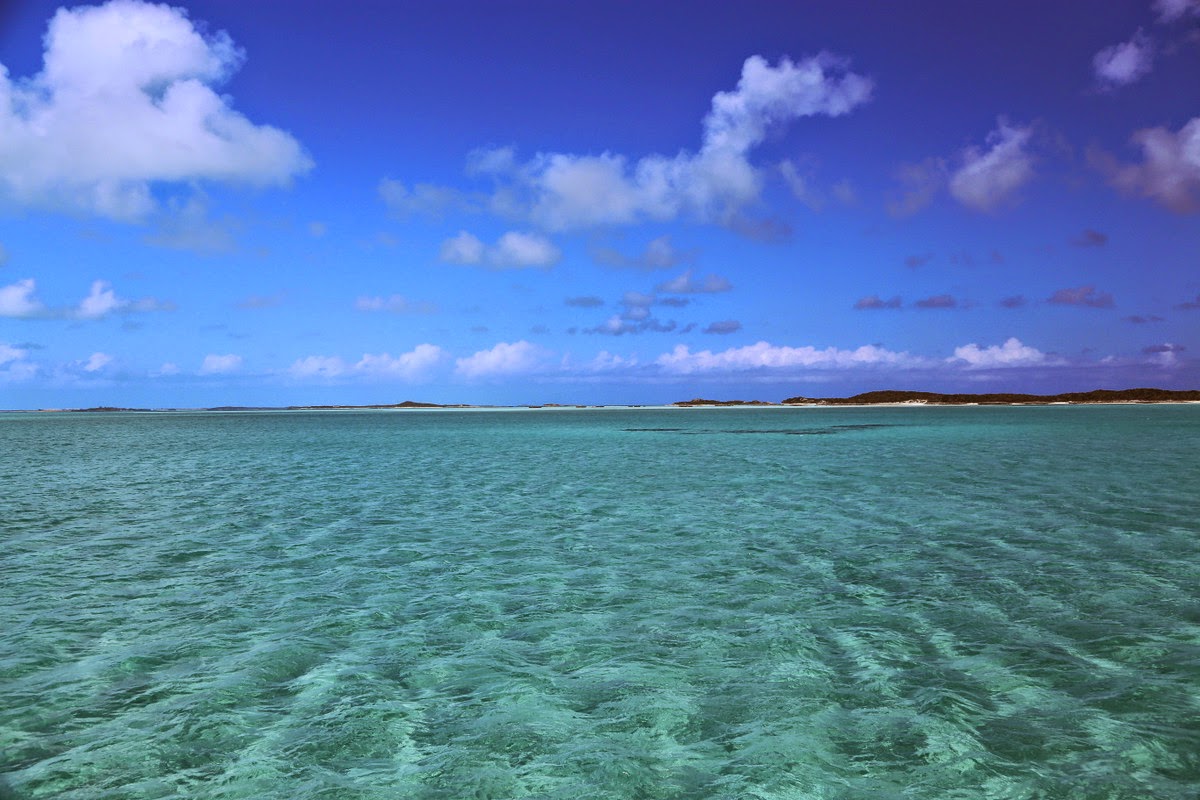 We had east southeast winds, so it was perfect for staying at the northern anchorage on Shroud.  We pulled in slowly, near low tide, prepared to stop in case we bottomed out in the sand.  We closely watched our depth sounder, seeing 2.6, 2.3, 2.0...  If it hits 1.5 we're on the bottom.  Luckily, it never dropped below 2, and we made it into the "deeper" section with 3 feet below us, total depth of about 7 feet.  Sadly, it was too far from the beach to swim or kayak too.

But the view from the boat was spectacular.  I couldn't stop staring.  The white sand in the distance... The rocks sitting in shallow sand, making the water around them the lightest blue, made them glow slightly.  It was truly breathtaking.  I loved just sitting on our back deck, feeding the baby, or reading a book, or watching the little ones play, and staring out at this amazing view.  With the winds blowing steady, the air temp was a perfect 78, which just added to the view. 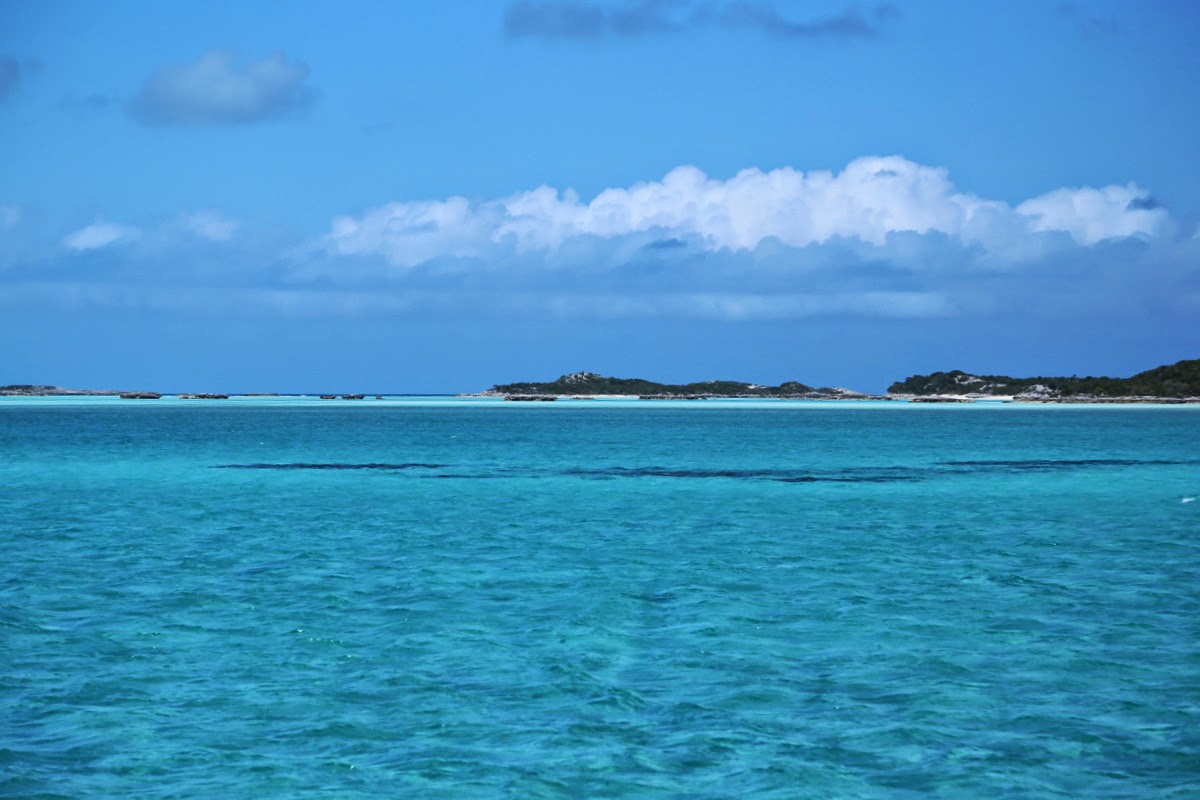 Late afternoon, the tide had come up and we all loaded into the tender to revisit the mangrove creek, as we had 2 years before.  After meandering thru the creek, we arrived at the eastern beach, with waves crashing in, and pools at the opening of the creek to the ocean.  It was just as beautiful as it was 2 years ago.  The kids grabbed their boogie boards, and were ready to run off.  We had a quick lesson on current and rip tides, reminding them to swim across a current, to not tire out trying to swim up a current.  And then they were off, running out to the waves to ride them in. 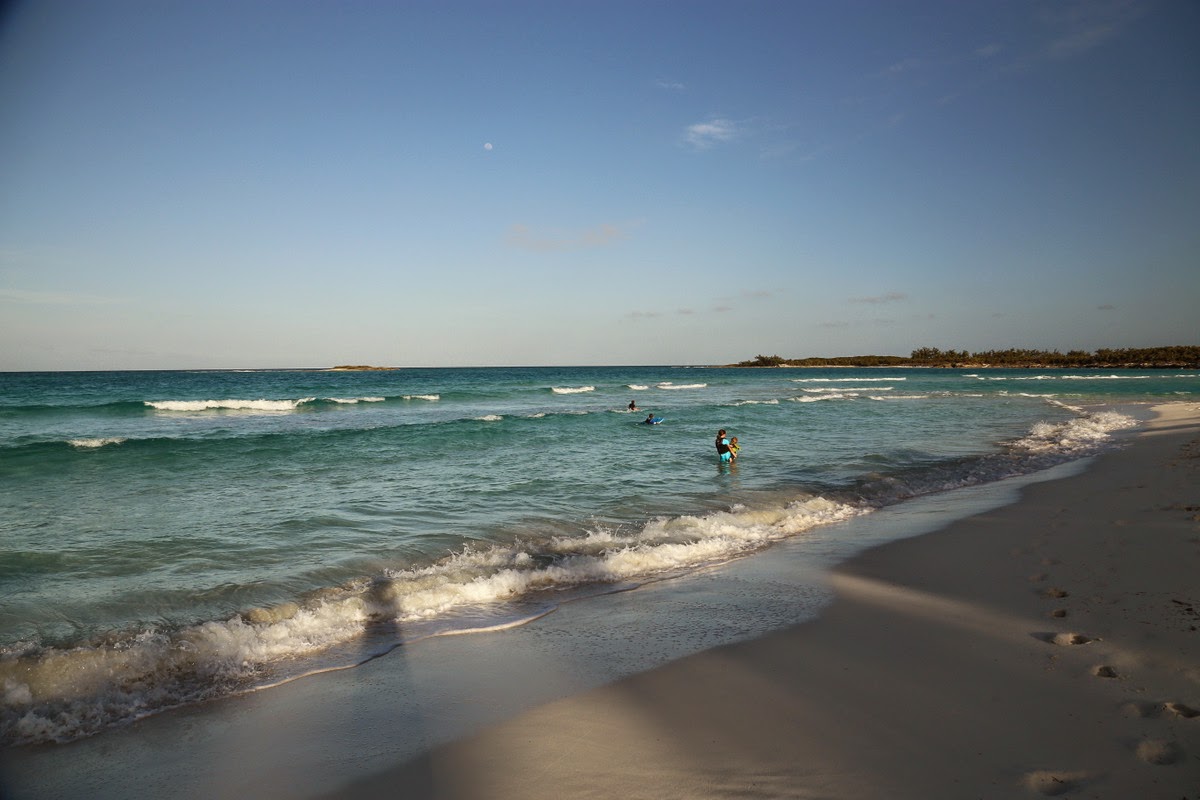 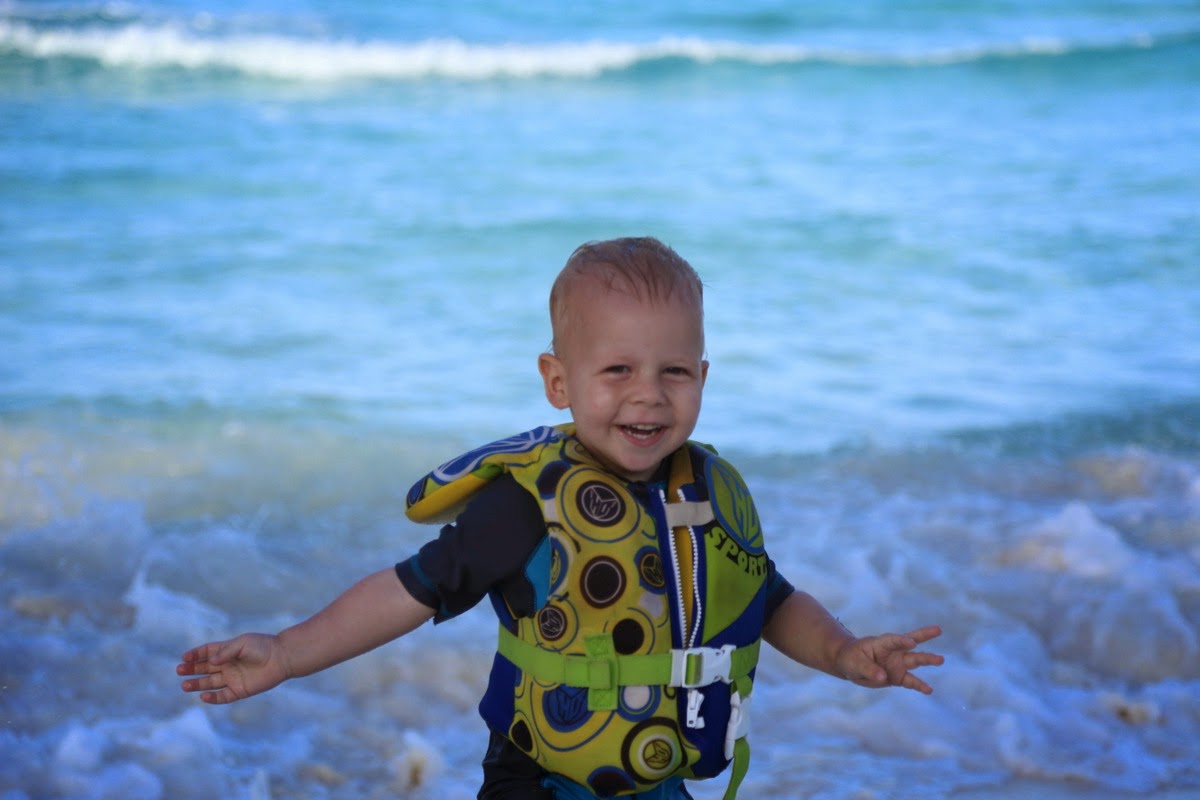 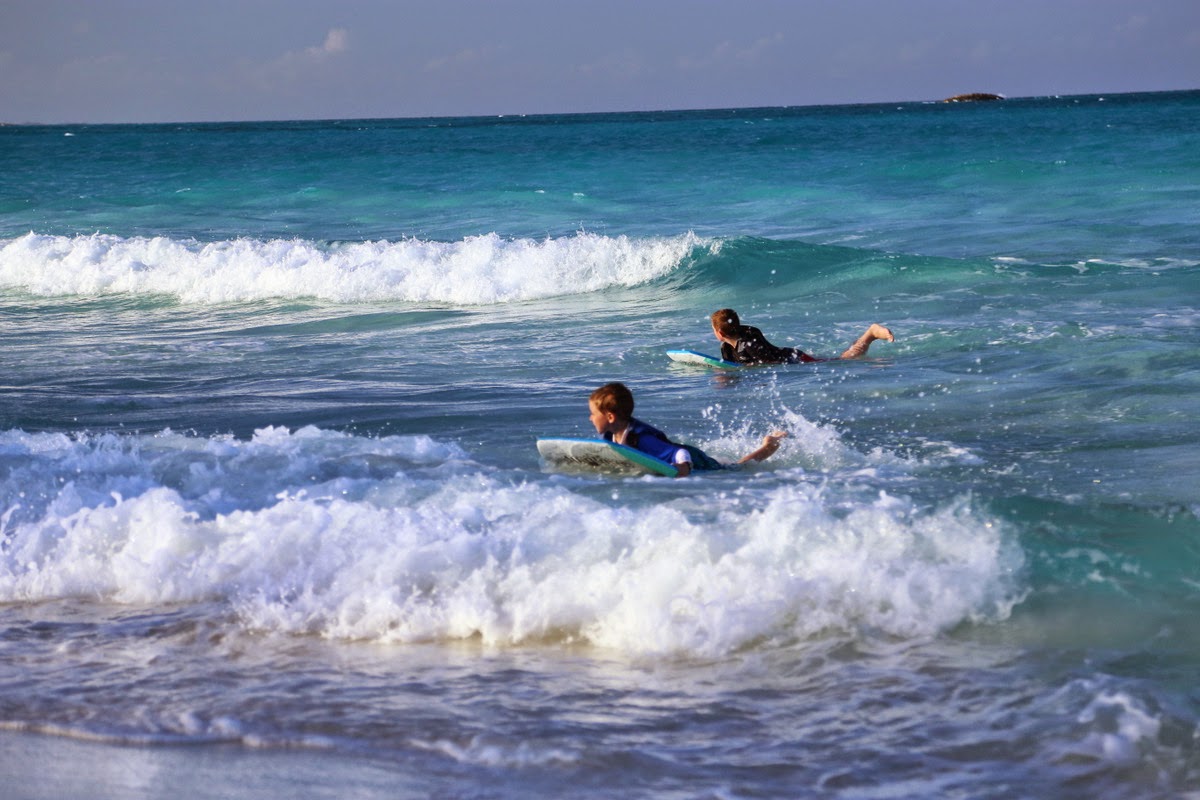 Matthew and Isabel and Brittany took the path leading up the hill to the "driftwood" camp at the top.  There is a pretty view from the top.  Matthew enjoyed the short hike so much, he had to drag Brittany off for a 2nd trip up the hill before we left.  The rest of the kids were having too much fun on the beach. 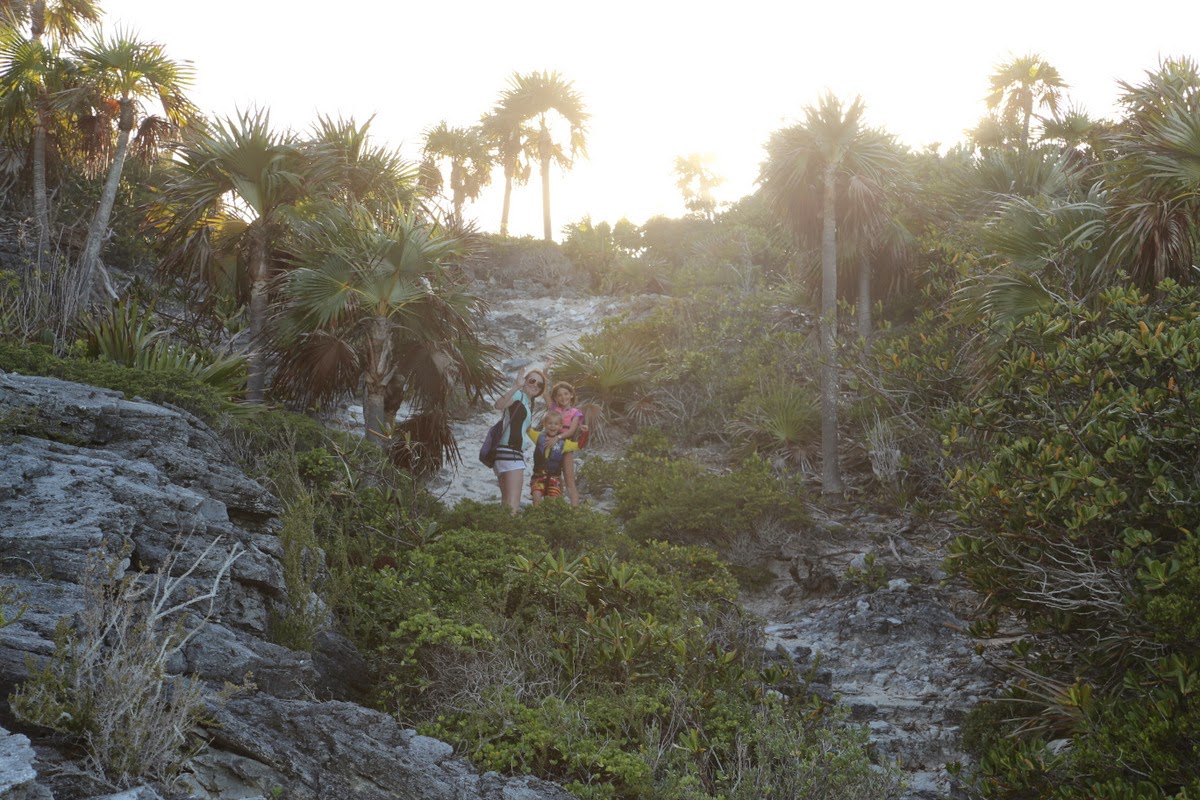 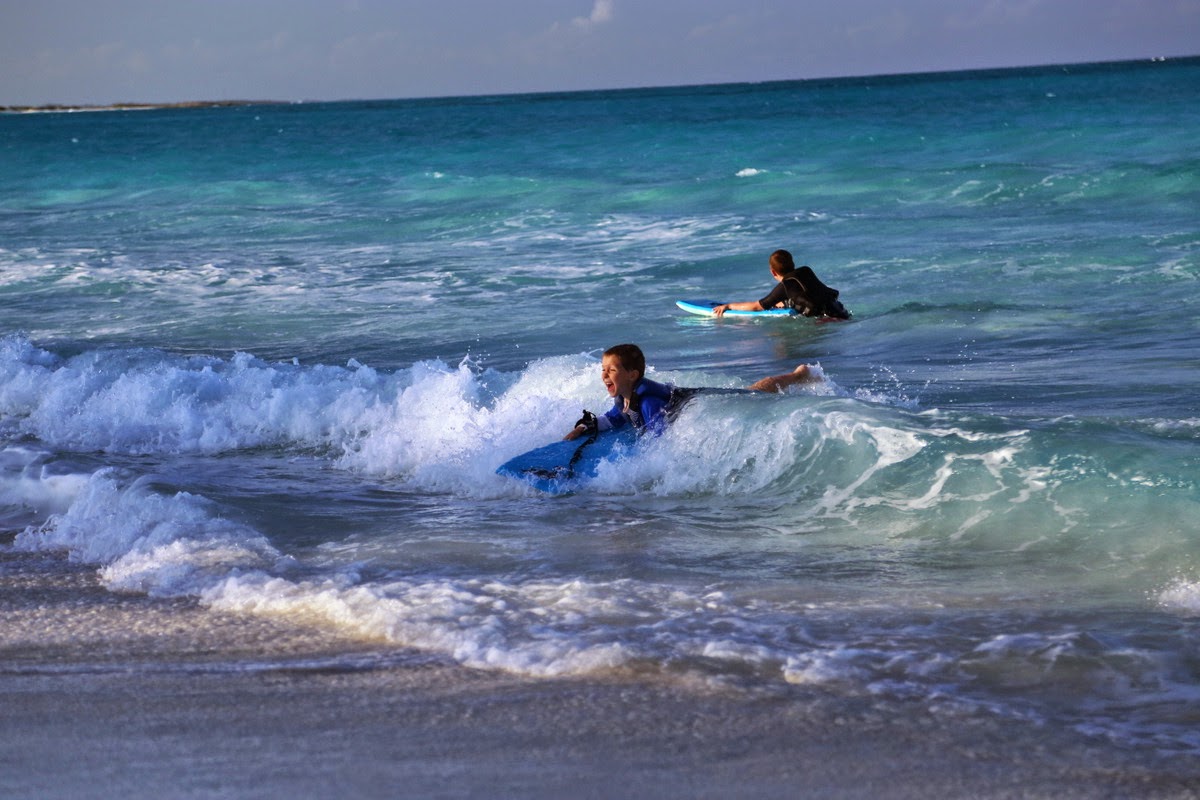 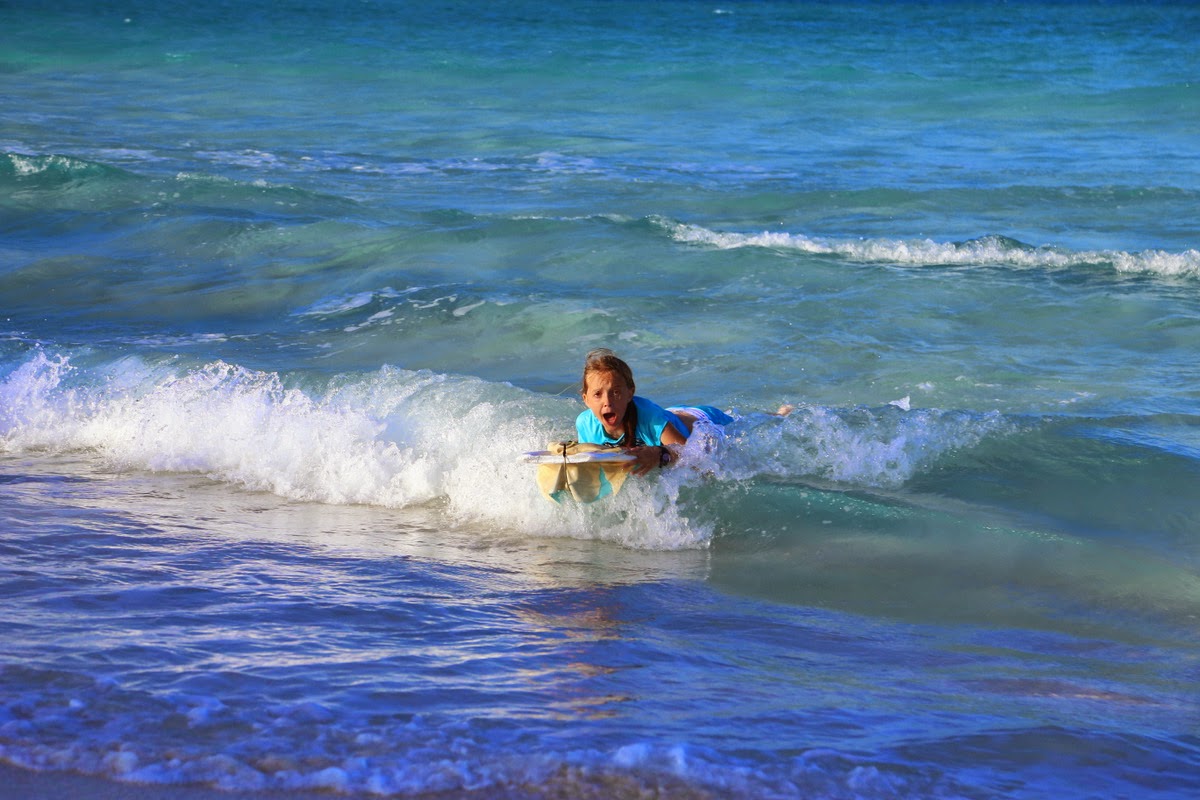 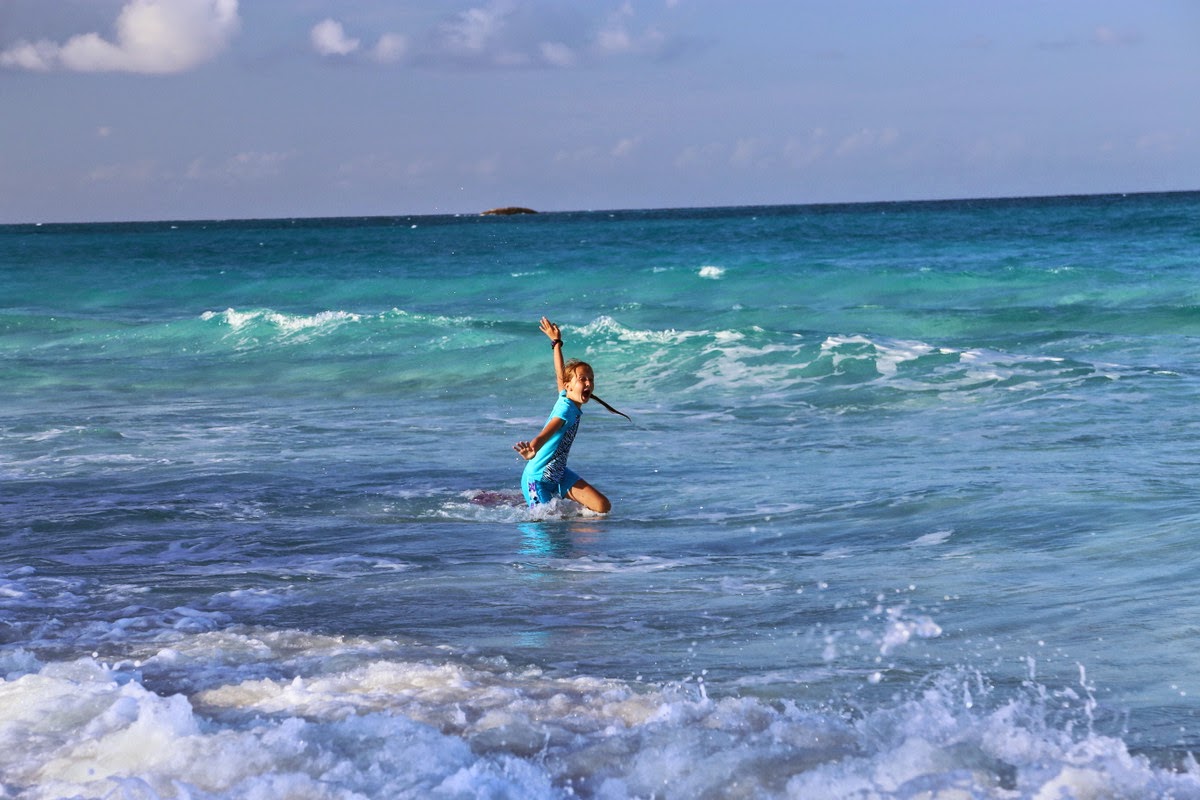 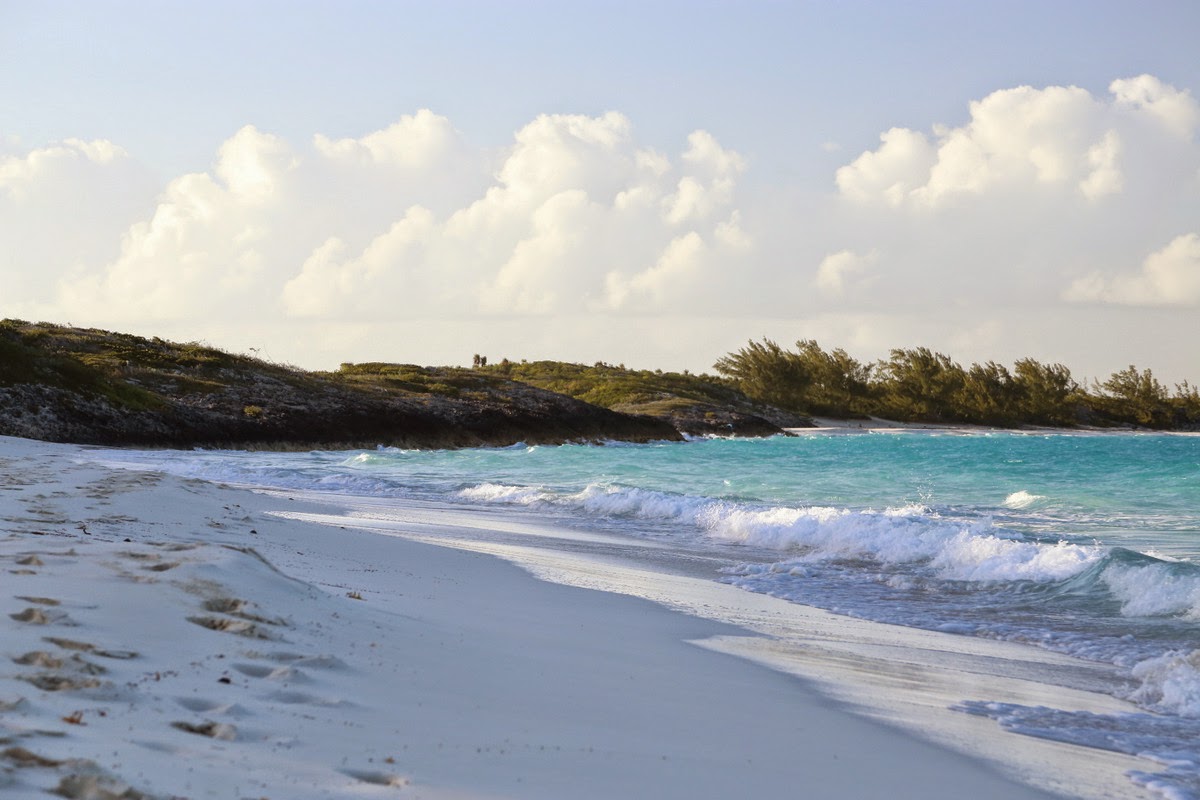 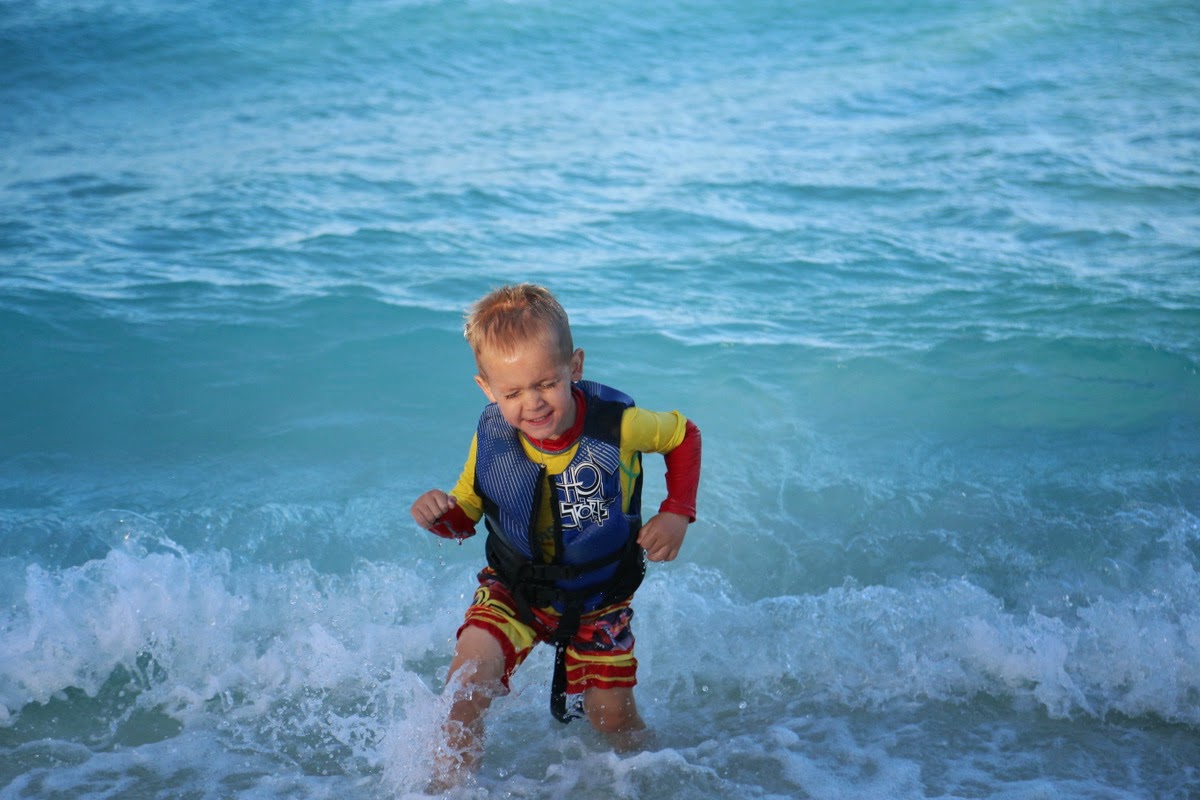 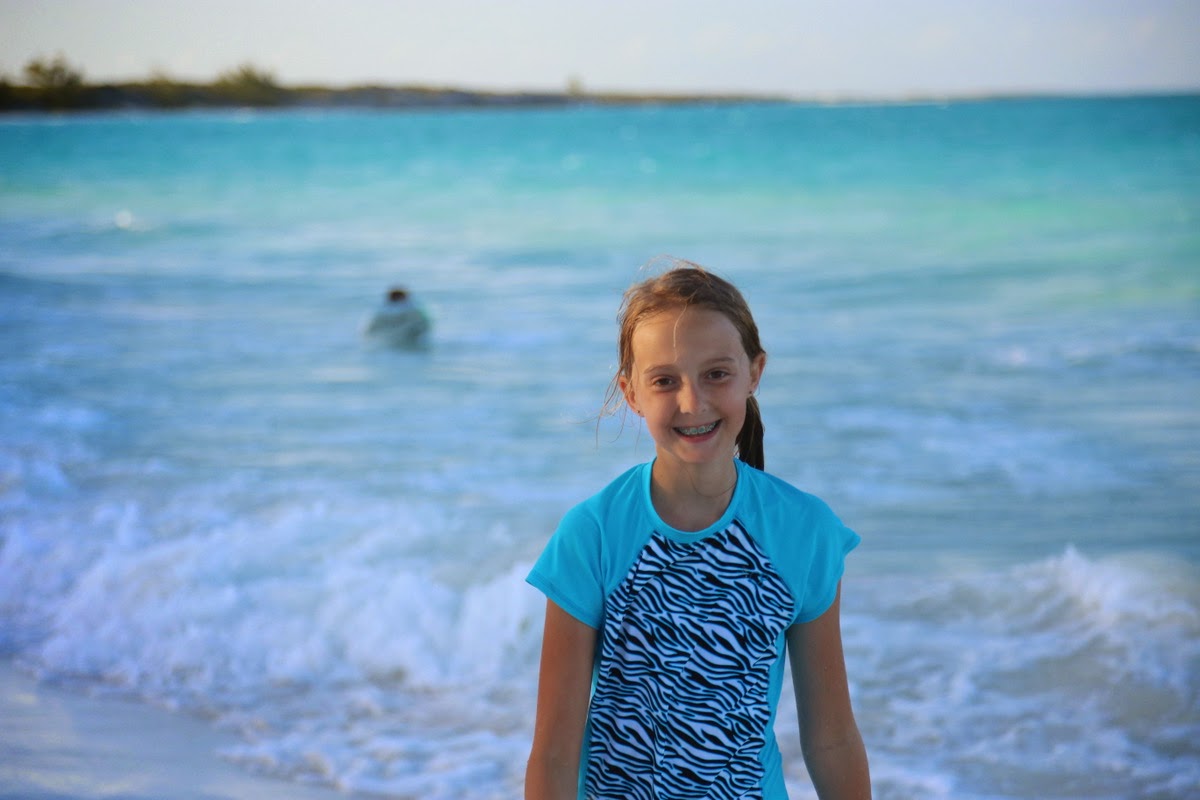 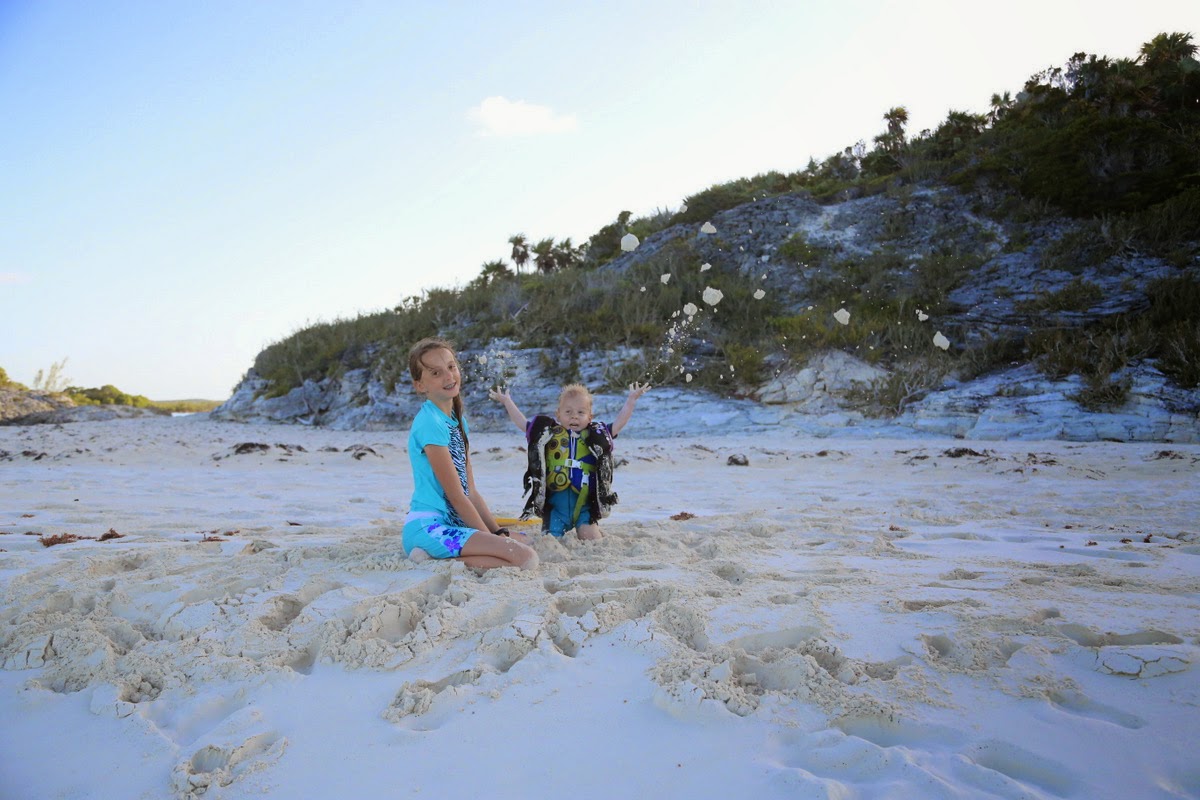 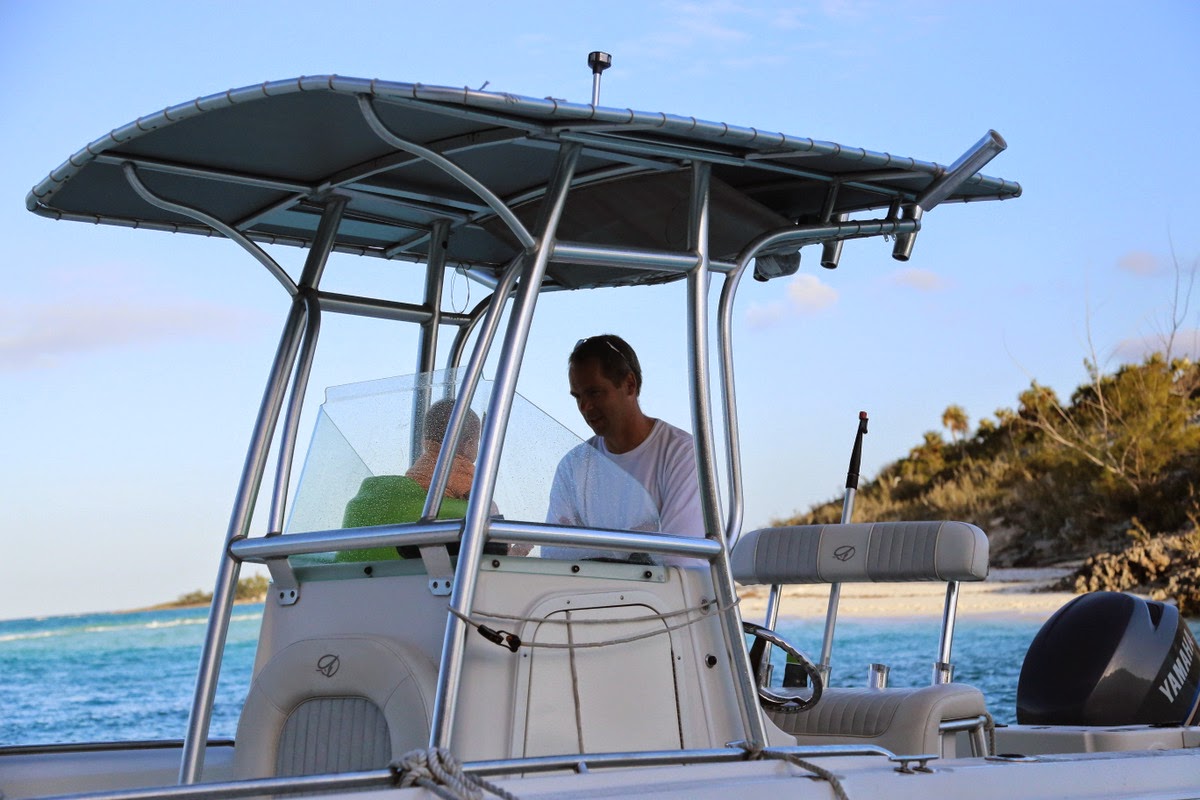 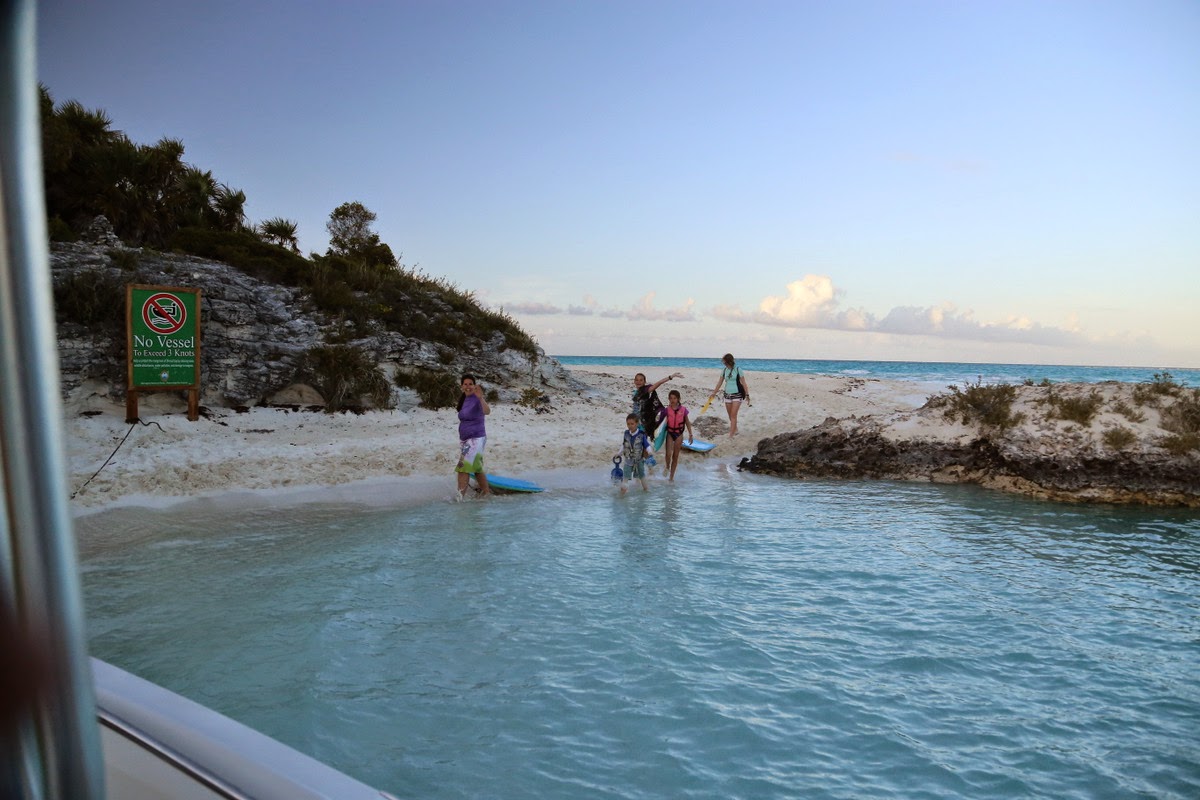 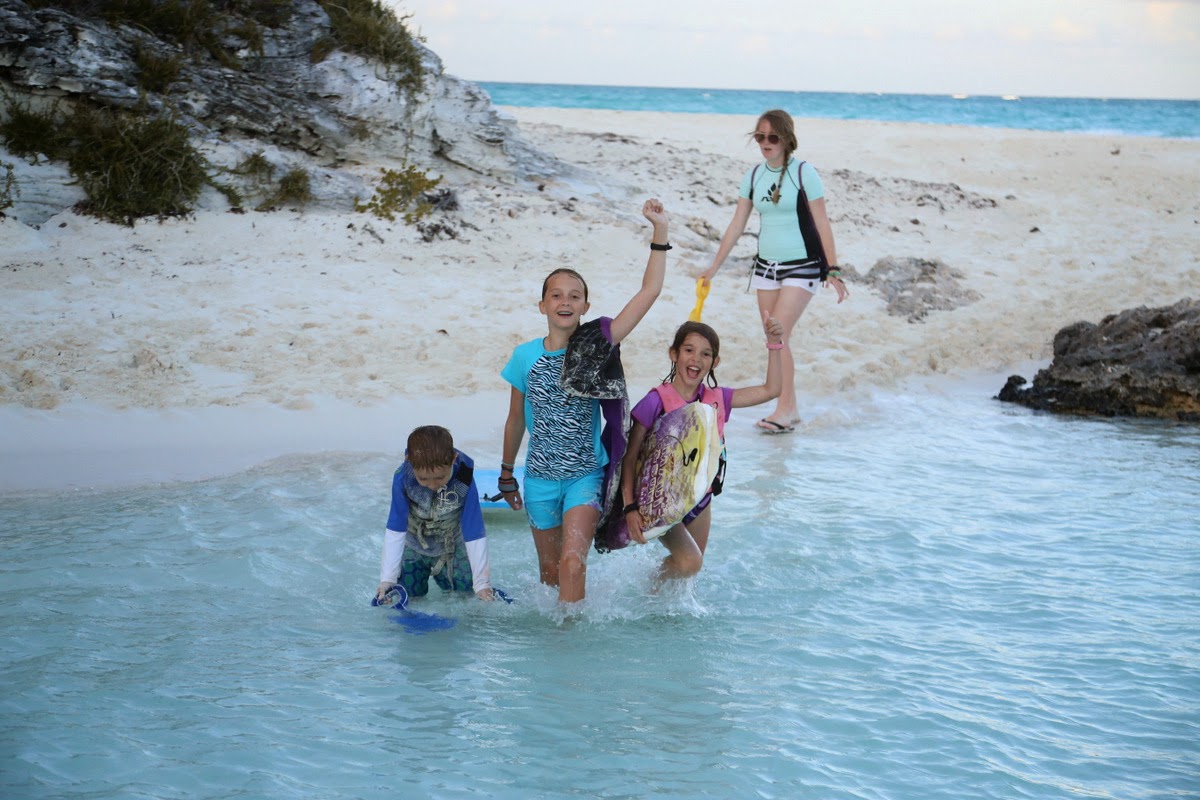 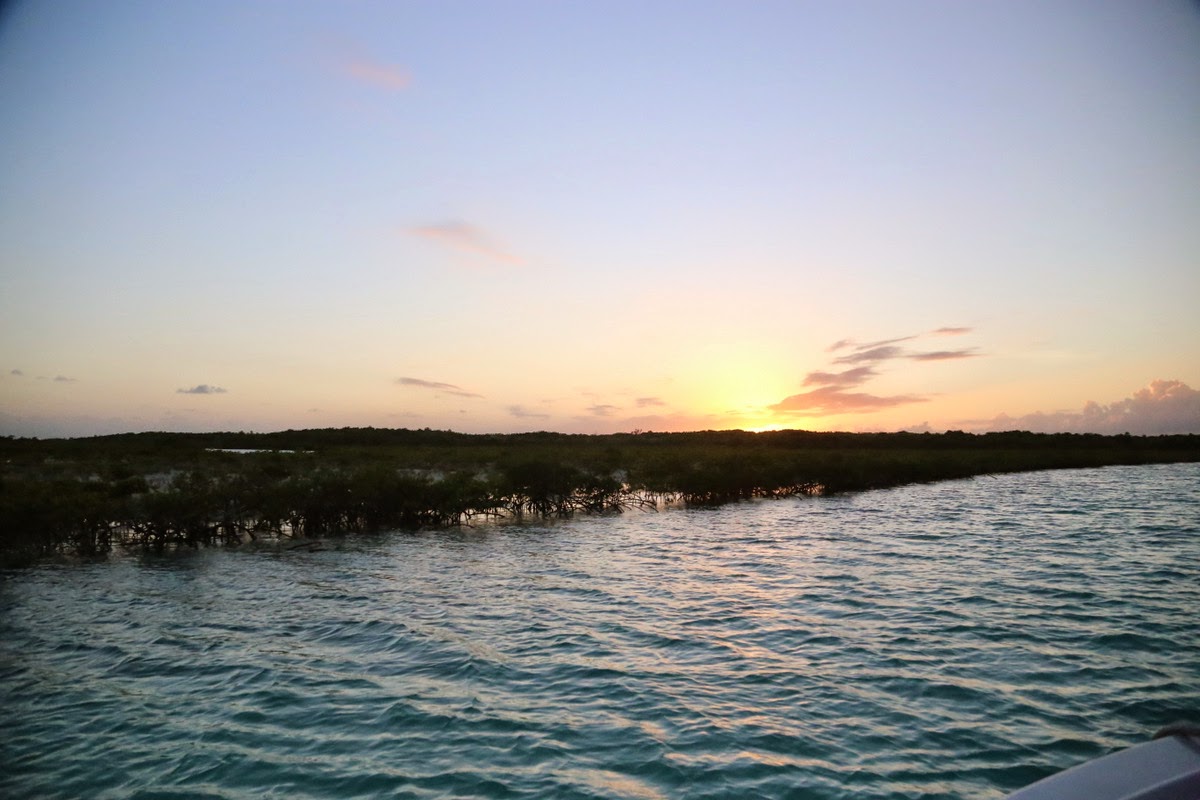 After a fun time at Driftwood Beach, it was time to head back thru the creek as the tide switched to head out.  The day was ending and we caught a beautiful sunset as we tendered back to the boat.  A perfect ending, to a great day. 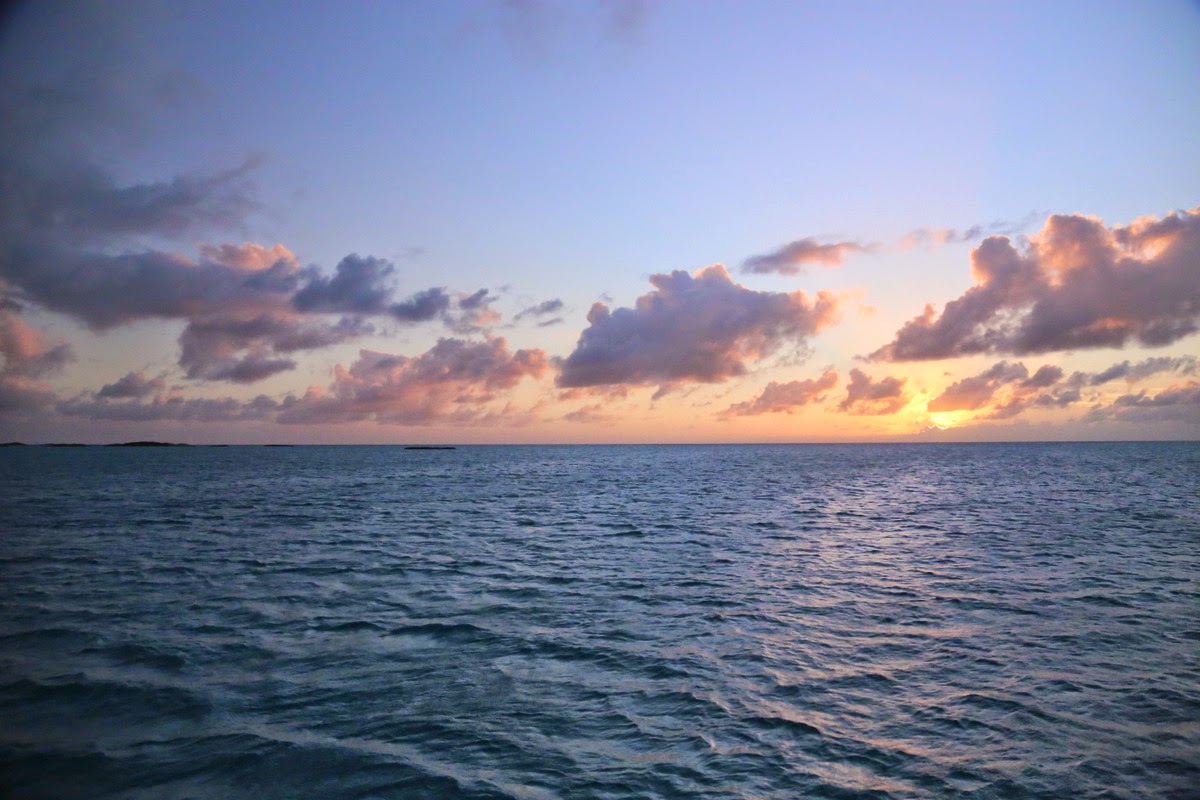 We spent another day at Shroud Cay, enjoying the beach.  The winds were still blowing out of the southeast, but on the beach there was only a breeze.  Calvin and Isabel still had enough wind to fly a kite, and had fun figuring out how to get it in the air.  Savannah and Isabel took the kayak into the creek and snorkeled for a bit, but did not find that successful.  I snorkeled awhile and saw a few fish.  Mostly I enjoyed walking the beach with Alexander and Matthew.  Matthew would run up the beach, into the rocks and mark an X.  Each new section of beach, seperated by rocks, had to be marked with an X.  I asked him why he was doing this.  Thinking he would say something piraty like "X marks the spot" or "that's where the treasure is".   His response... "the people will know what it means when they find it".  He puts a smile on my face. 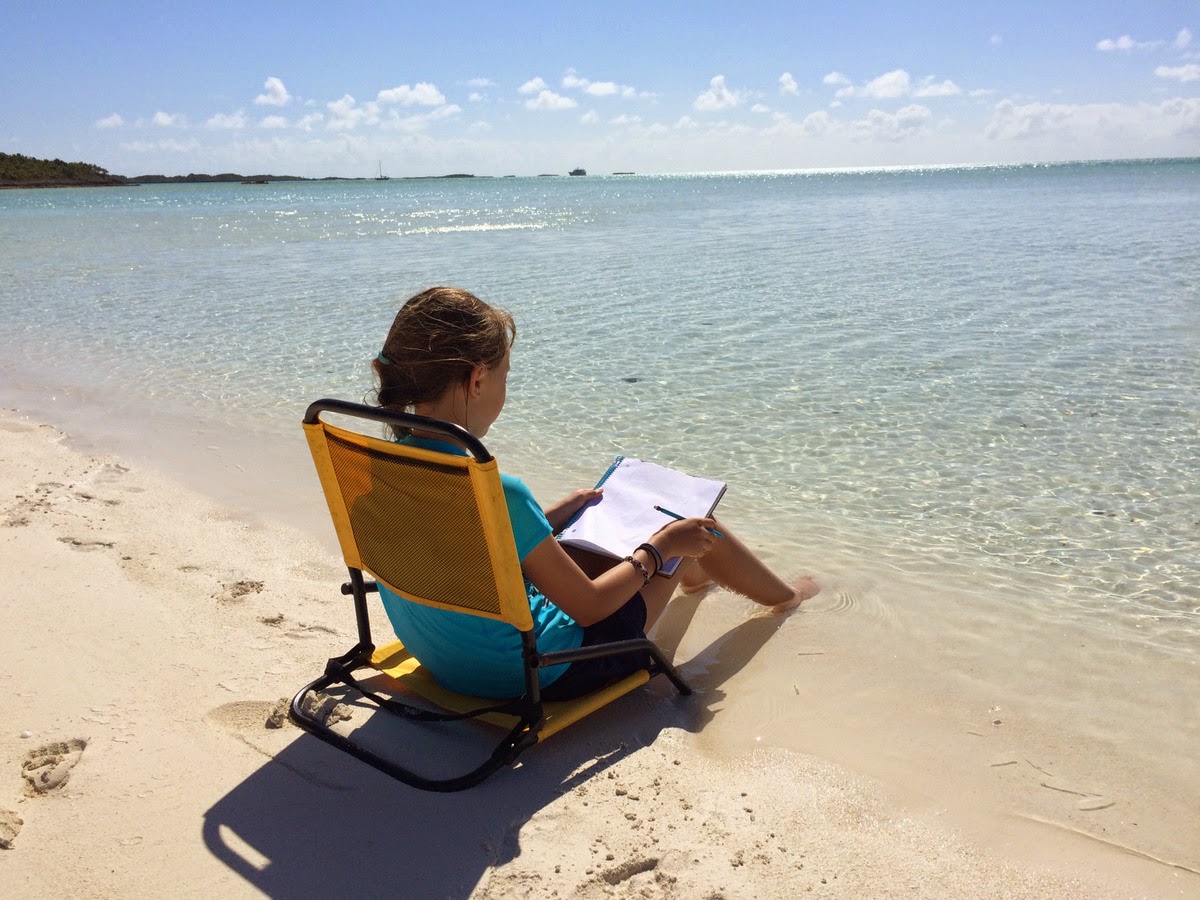 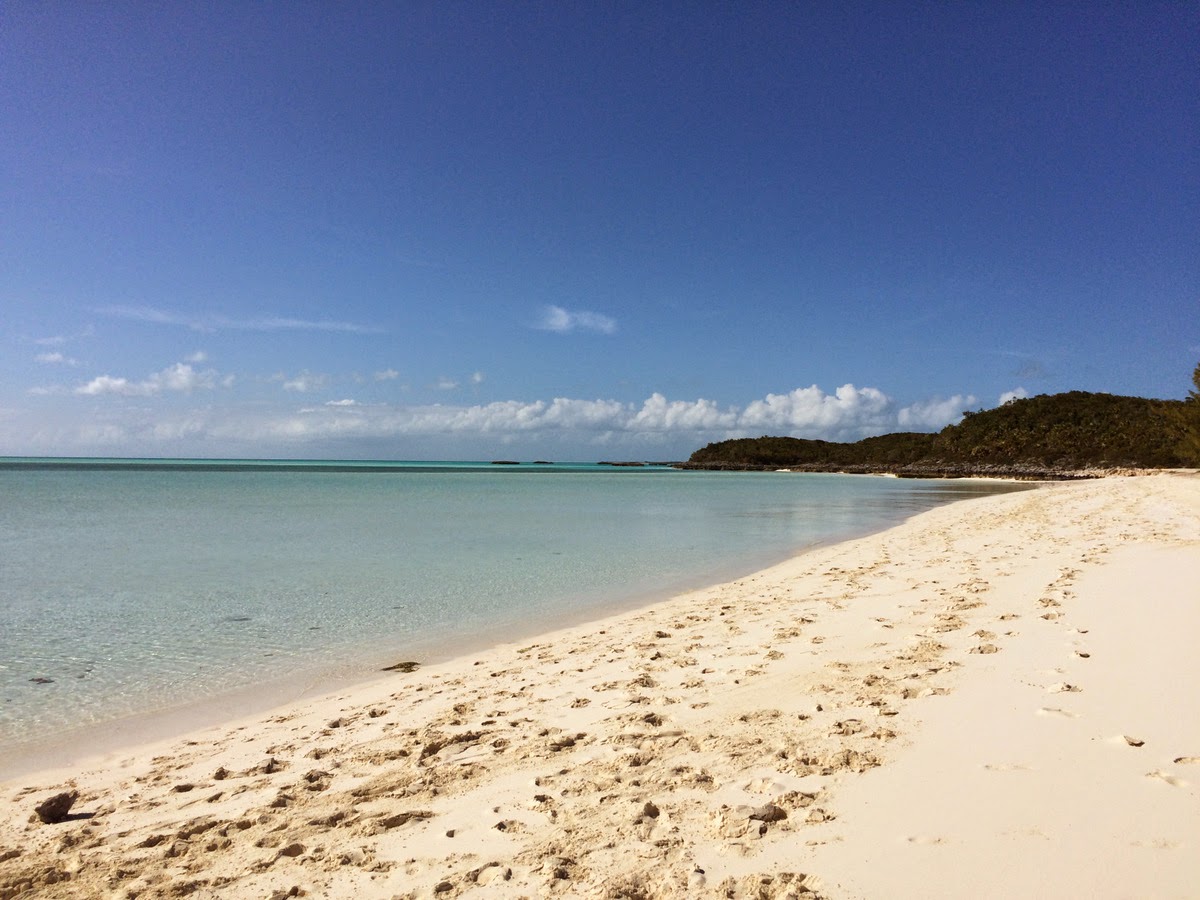 We decided to head out the next morning.  In hopes of finding something a swims length away from a beach, and a little more peaceful so we could put our floating dock back down.  It wasn't uncomfortable where we were, but because we had to anchor so far from shore, the water was slightly choppy.  There was too much wind where we were for the dock.

Before we left the area, we tendered around to see the nearby anchorages.  Had the winds been lighter, and more eastern, my first pick would be to move to the south Hawksbill Anchorage.  It was absolutely beautiful too.  But with the wind and south swell, it just would not do.  We even tendered around to the south end of Hawksbill cay, and WOW...  absolutly stunning.  I was sad we would not be enjoying that area this trip.  I guess it leaves something new to explore next year.

We decided to head a little more south and try anchoring off of Little Halls Pond, the private island of Johnny Depp.
Posted by The Blood Family