If your a James Bond Fan then you may have heard of Thunderball Grotto.  It is located here in the beautiful Exumas, near Staniel Cay.  We have passed up the opportunity to snorkel there on our last 2 trips thru the area.  We had snorkeled several other spots in the area, and a few other caves.  This trip we decided we'd go and do it.  And we are glad we did.

Anchored at Pipe Creek, ThunderBall Grotto is only a couple of miles south.  So at slack tide on Friday we packed a lunch and loaded all the kids into the tender for a quick ride to the grotto.  It was a very windy day, so I thought the ride there would be much bouncier in the waves, but we stayed dry and the water was protected on the west side run by the small islands to get there.

We pulled up to the small rock island and dropped anchor as another tender was leaving.  I asked about the current running thru the cave and they said it wasn't bad.  We had hoped we had come at the right time to find the current minimal.  It was approaching high tide so I knew we might need to swim under to enter the cave.  Our anchor took a bit to bite, so Calvin and I had to jump in to help it along.  As we were doing this, a few other tenders and dayboats started showing up for a snorkel at the grotto too.

As soon as the kids were ready, I took the older kids thru the cave.  David stayed on the tender with the little ones.  The outside and entrance to the cave had beautiful coral and colorful fish.  I was torn between lifting my head to make sure I didn't run into rock on my way in, and keeping my eyes in the water watching the beauty below the water. 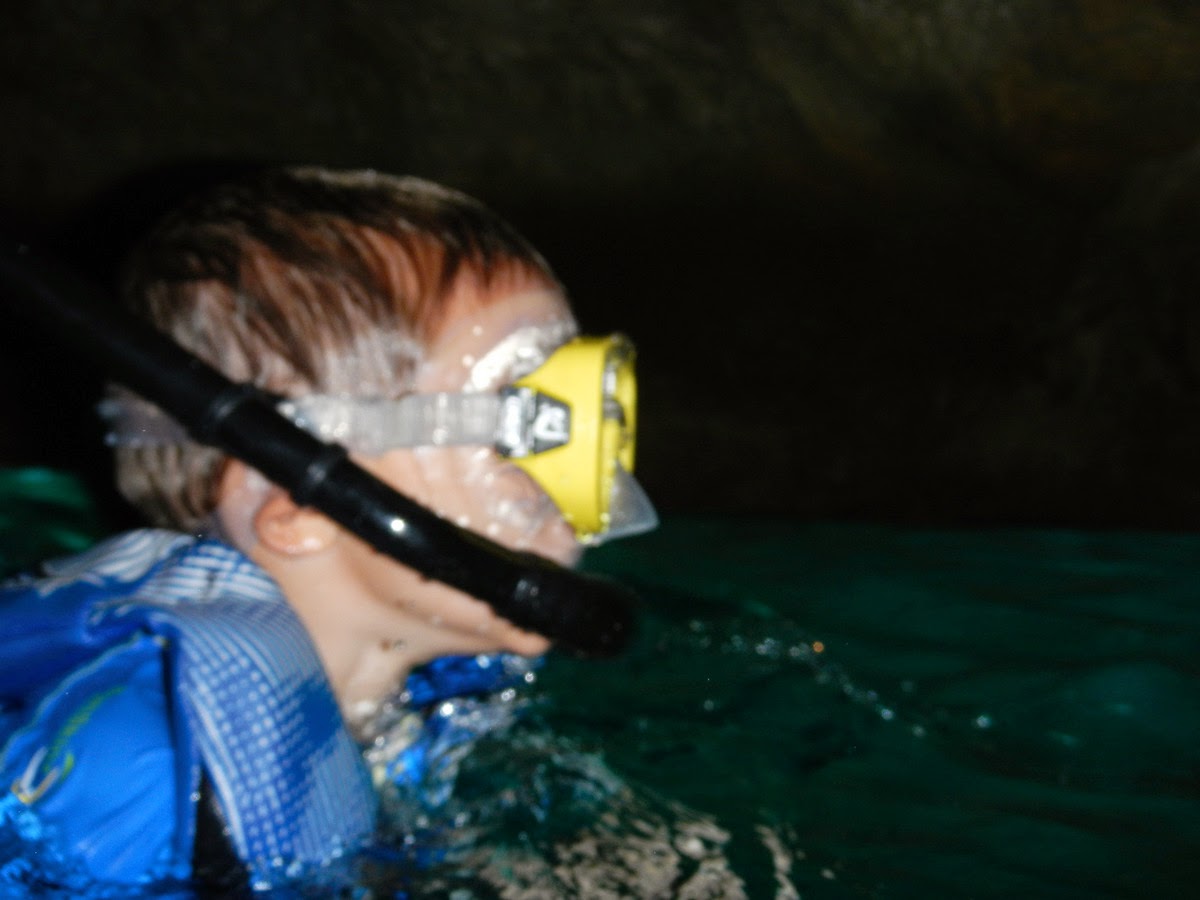 Once inside the cave, there was less current, and groups of fish.  It was fun snorkeling around.  There were 2 skylights in the roof of the cave.  There was also a few other entrances or exits to the cave.  I didn't swim out the one on the other side with the winds blowing.  But it looked like some pretty coral around the east entrance.  Instead we swam out a small hole in the back of the cave.  Benjamin and Isabel swam back the way we went in, and Savannah, Calvin, Brittany, and I swam down and thru the low hole.  It was fun. 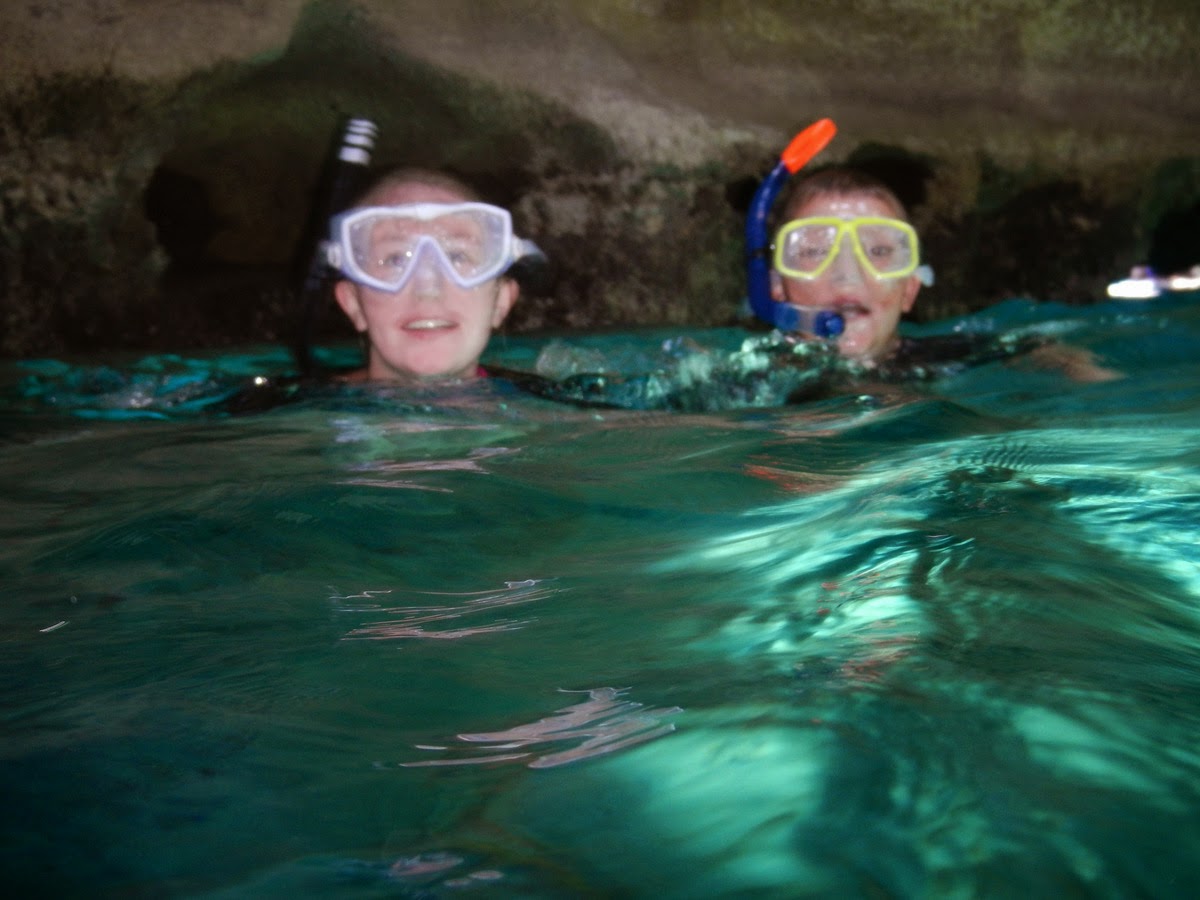 David and Calvin went thru the cave together after I went back to the tender.  While they were in the cave a few brave souls climbed up the outside of the cave and jumped in thru the skylights.

After our swim we headed over to the nearby Big Majors Anchorage, filled with a couple dozen boats, this is a popular anchorage.  We stopped first at the beach with the pigs.  It's always fun visiting the swimming pigs. 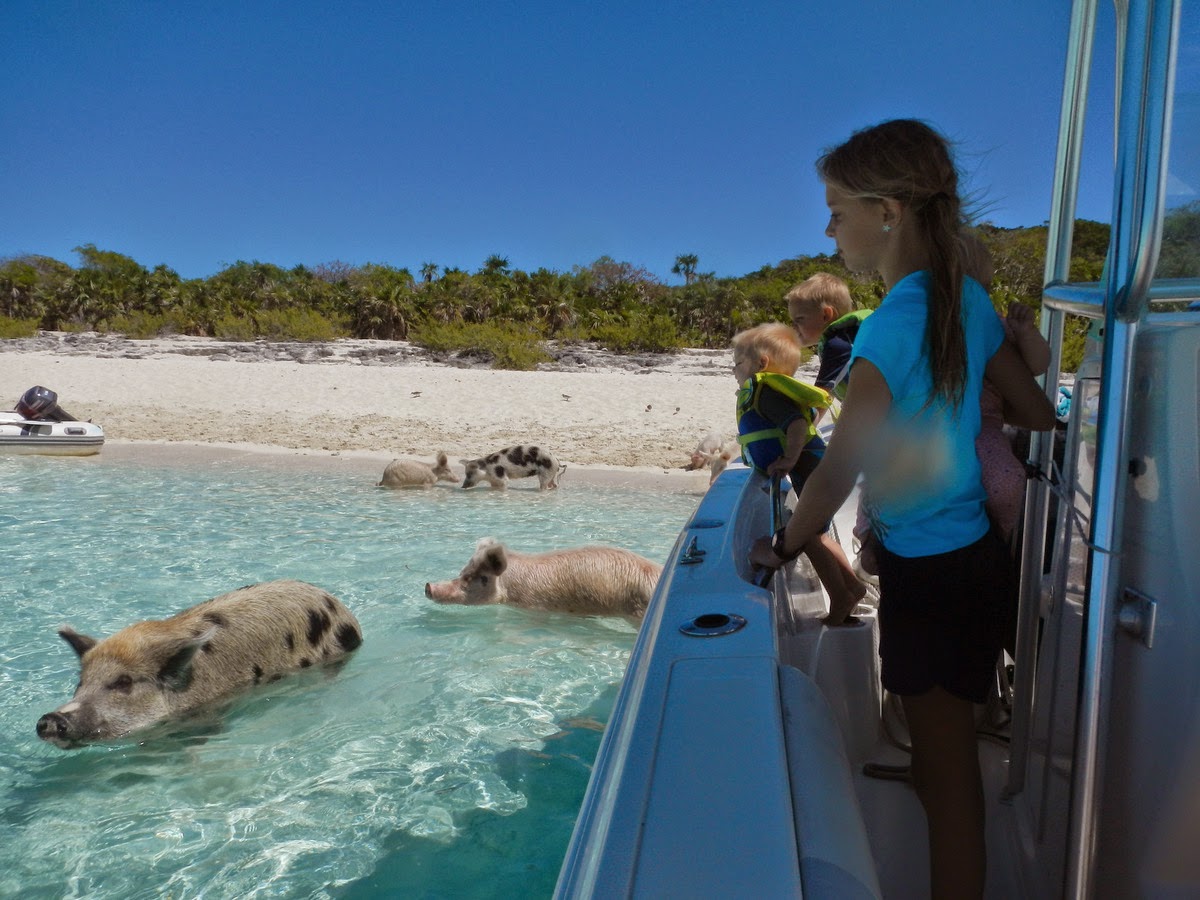 Next we went to "Pirate's Beach"  where we were told it was "Bill's Beach", by Bill who came quickly running up to the beach in his Dinghy just as we arrived.  We had read and been told that Pirates beach was a great place to go for an afternoon picnic.  That there were tables and chairs available for use.  So we had packed a picnic and planned to eat lunch there.  But Bill came up and told the only other few people there that they had to move off of his picnic table.  He was quite rude, and the others ended up leaving.  We had sat down at the other picnic table, and I had pulled out the food, and was feeding the baby, so I wasn't leaving until that was done.  David attempted small talk with Bill, who finally started to chat as he found out we were on cruising on our Motor Vessel, anchored in Pipe Creek.  I got the impression he thought we were just resort vacationers, with a day boat, come to take over "their" beach for the day. Once he knew we lived aboard, he was slightly more friendly and interested in "boat" talk.

After an hour it was time to head home anyway, so we left Bill behind with HIS beach. 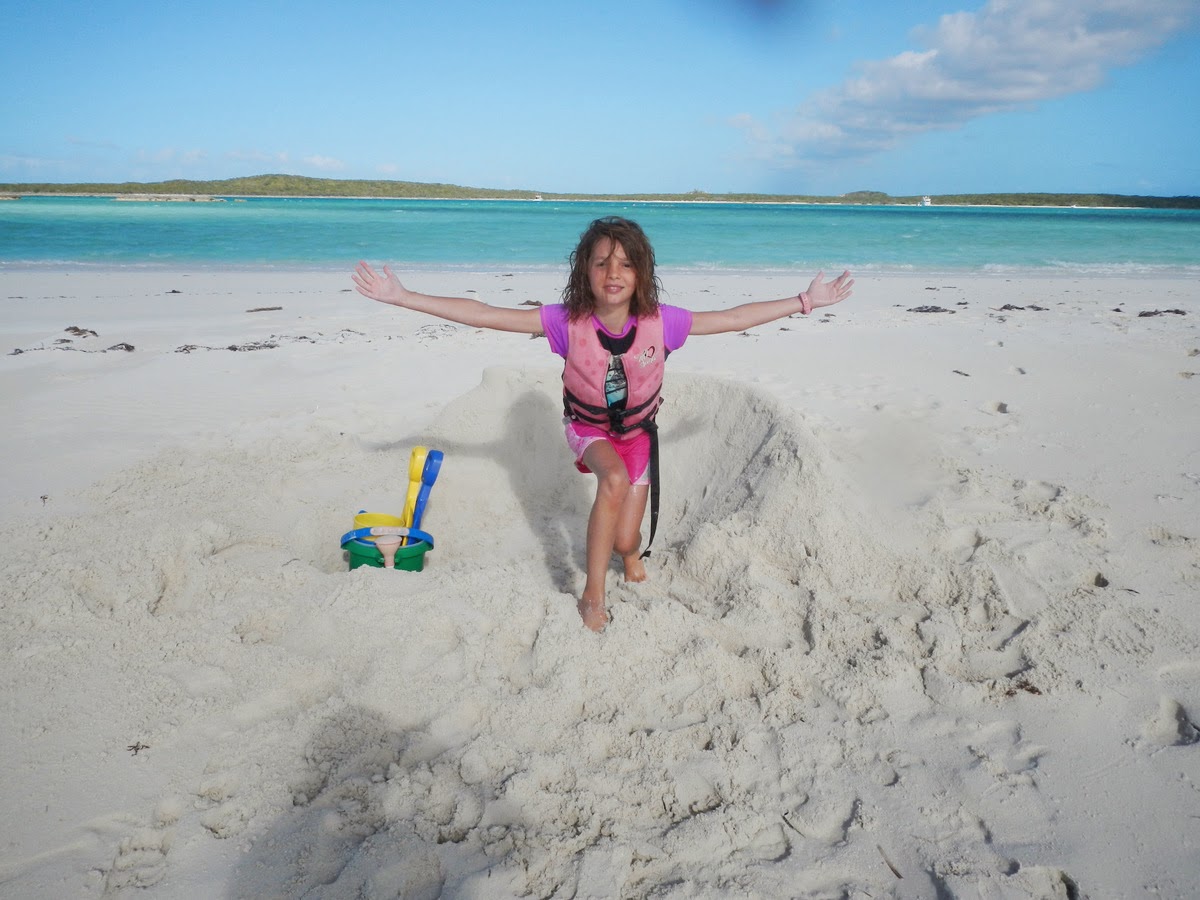