Next island on the itinerary... Carriacou.  Grenada consists of 3 islands, one of which is Carriacou.  It is just a few short miles from PSV so it took us less than an hour to pull into the calm Tyrell Bay. 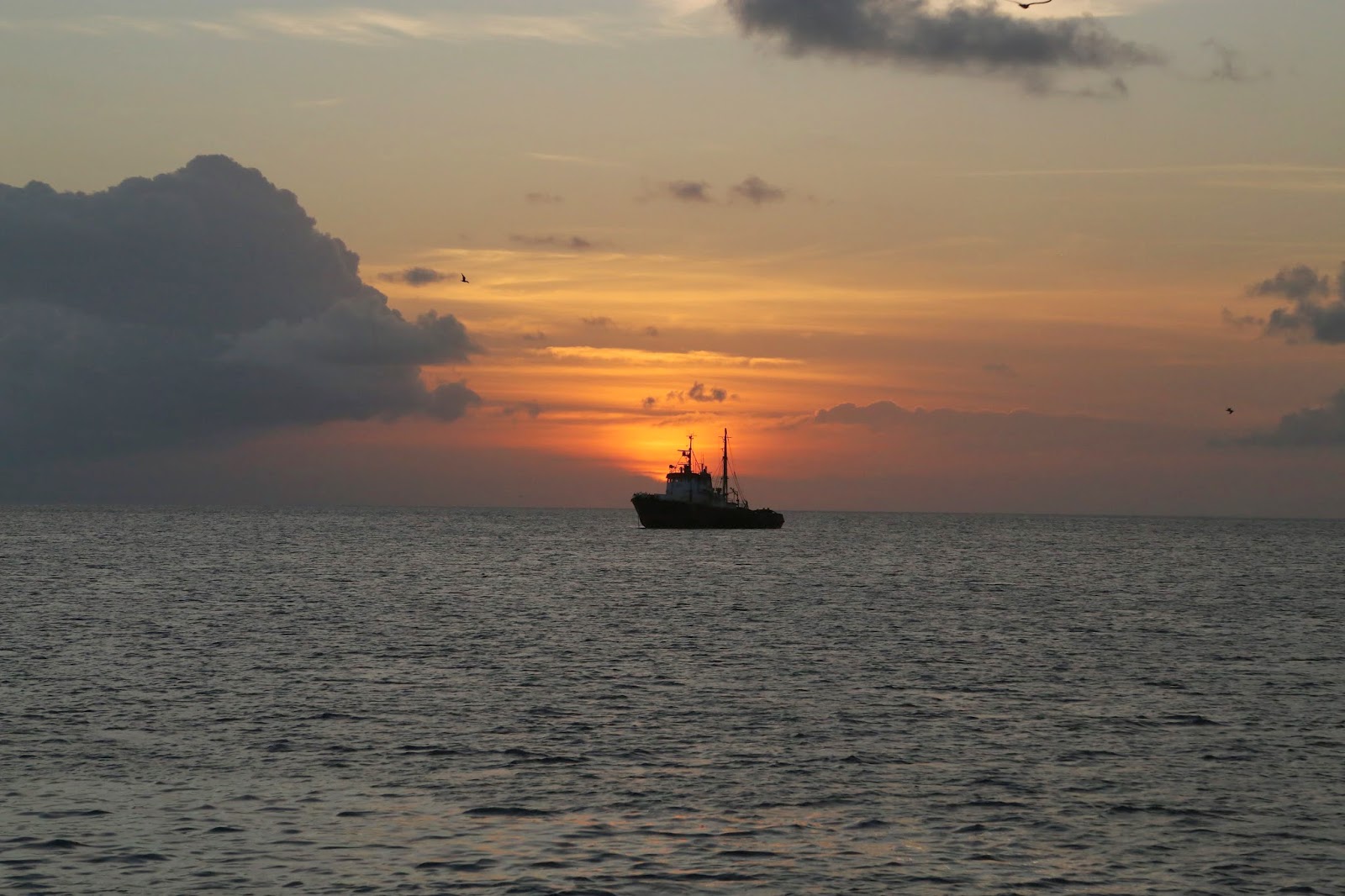 This is a fairly protected harbor so there were quite a few boats, several live aboard boats. Here we were able to clear into with customs and immigration for our stay in Grenada.  The customs officer was quite friendly and I enjoyed chatting with him.  He told me he was a police officer for 16 years before switching to work as the customs officer.  He said being a police officer was stressful, then later he said the island was so safe, they only have 1 homicide every 5 years.  So I had to ask him if the island was so safe, how come being a police officer was stressful?  His partner the immigration officer chuckled and answered for him -- because he might get transferred to Grenada!  The customs officer, Alexi, is from Carriacou and loves it there and does not want to go to the main island of Grenada.  Alexi told me his the whole south side of the bay was where all his family and extended family live, in fact the property of his office is owned by his family, his grandparents.  He said his father had 36 children.  Holy smokes.  We have heard large numbers like that as we have travelled the islands and talked with locals throughout the Caribbean.  Marriage is also not prevalent.  However this customs officer was very fond of being married and not following in his father's footsteps.  He is married with 2 kids and felt family time was very important.  He would tease his immigration partner about it, who was not interested in marriage himself.  He was also not interested in having kids or following his dad who had 25 children. 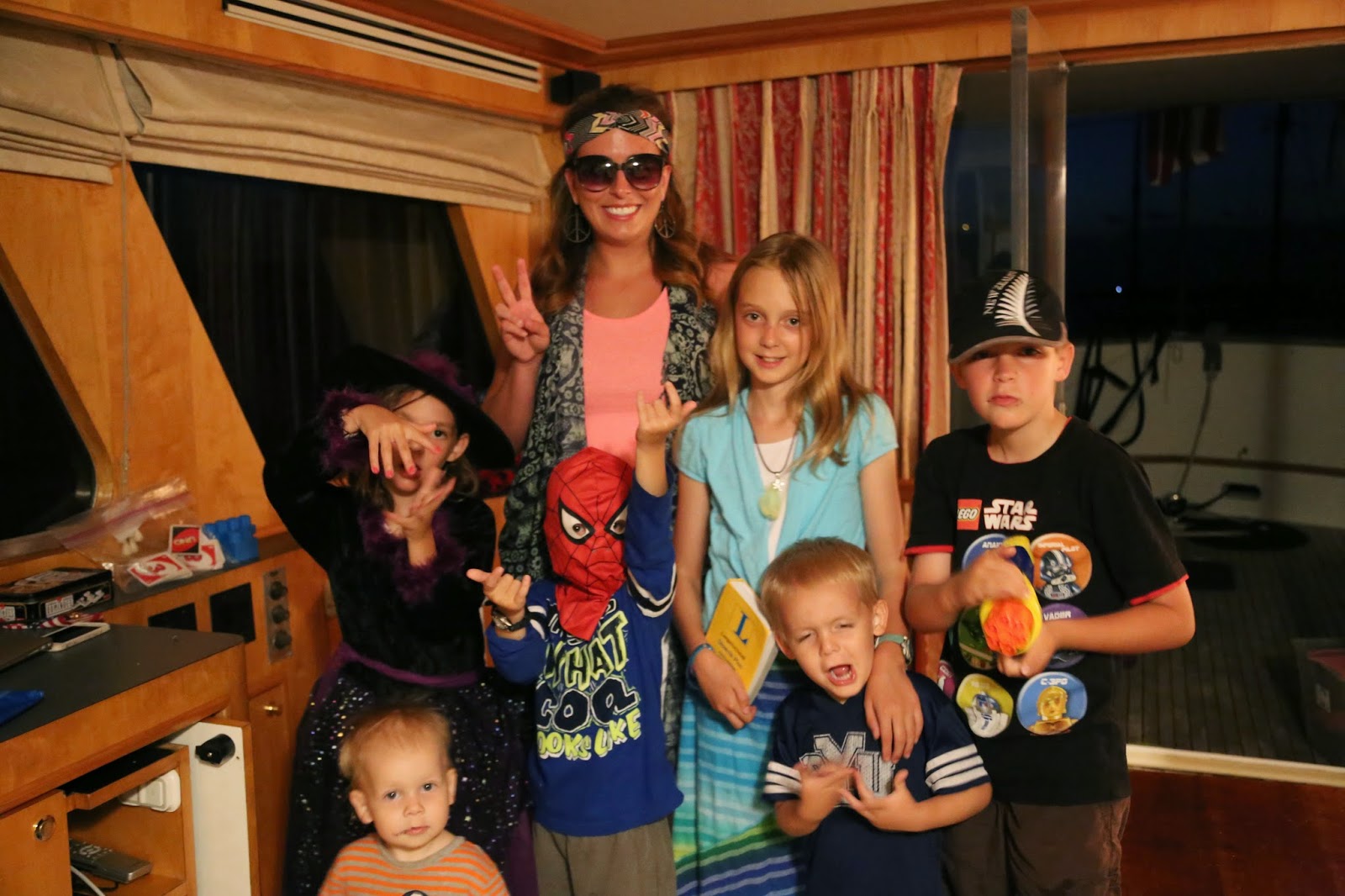 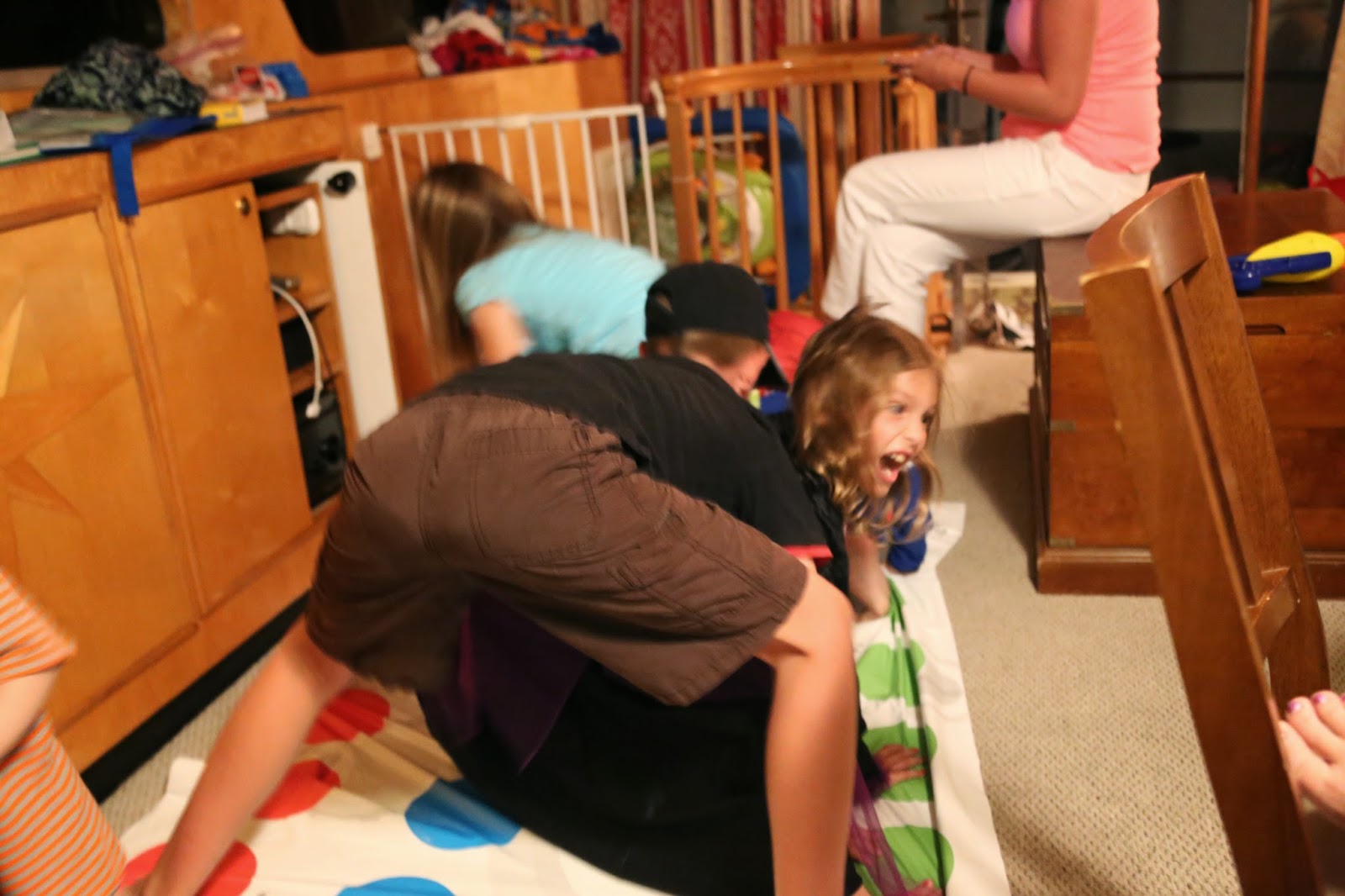 That night, the kids had a costume party for fun.  They each dressed up and played twister together.  It was fun to watch them enjoying each others company.  It's one of the things we love about spending so much time together.  We love watching our kids play together and develop friendships with each other.  Our most important ties in this life should be with our family.  Often when we are home, the kids want to play with all their friends, which is great and we enjoy having friends over all the time.  But we love taking this time to strengthen our family bonds and as our kids approach teenage years, where so often kids start to put their friends first, we hope these family bonds will be more important.

In the bay is a small boatyard that David had read good things about.  Our tender needed the bottom touched up and repainted.  We had it done in St. Lucia several months ago, but they did a terrible job and supposedly used all of the paint we left them, 2 gallons.  Boat paint-- is not cheap, especially down here in the Caribbean.  But we had to buy another gallon to get the job done in Tyrell, and they only used half of it, so where the 2 gallons in St. Lucia went, we're not sure.

They were able to do the job right away and only took about a day and a half.  The beach was not very appealing there so the kids didn't want to play there.  But David, Matthew, and I had fun taking the dinghy thru the mangrove lagoon nearby.  We also headed into the small town a few times to pick up fresh fruits and veggies from the small market stand.  Bananas were cheap which was nice and she had fresh veggies and eggs which were good to restock on.  The owner was very friendly and enjoyed chatting with little Matthew.  At the supermarket, which is more like a tiny corner market I splurged on some Nutmeg syrup to try.  I'd never seen that before and it sounded good for morning pancakes. 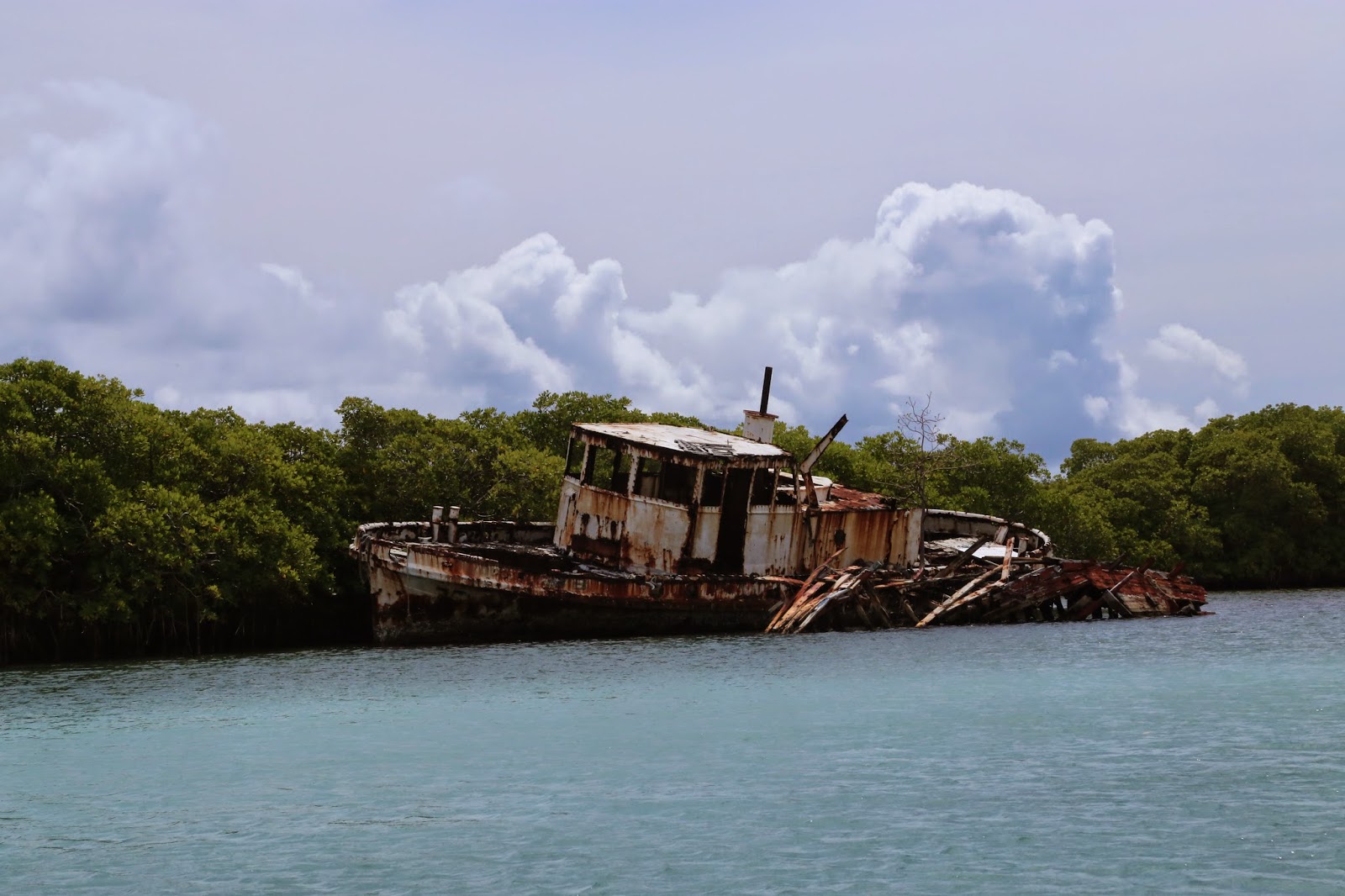 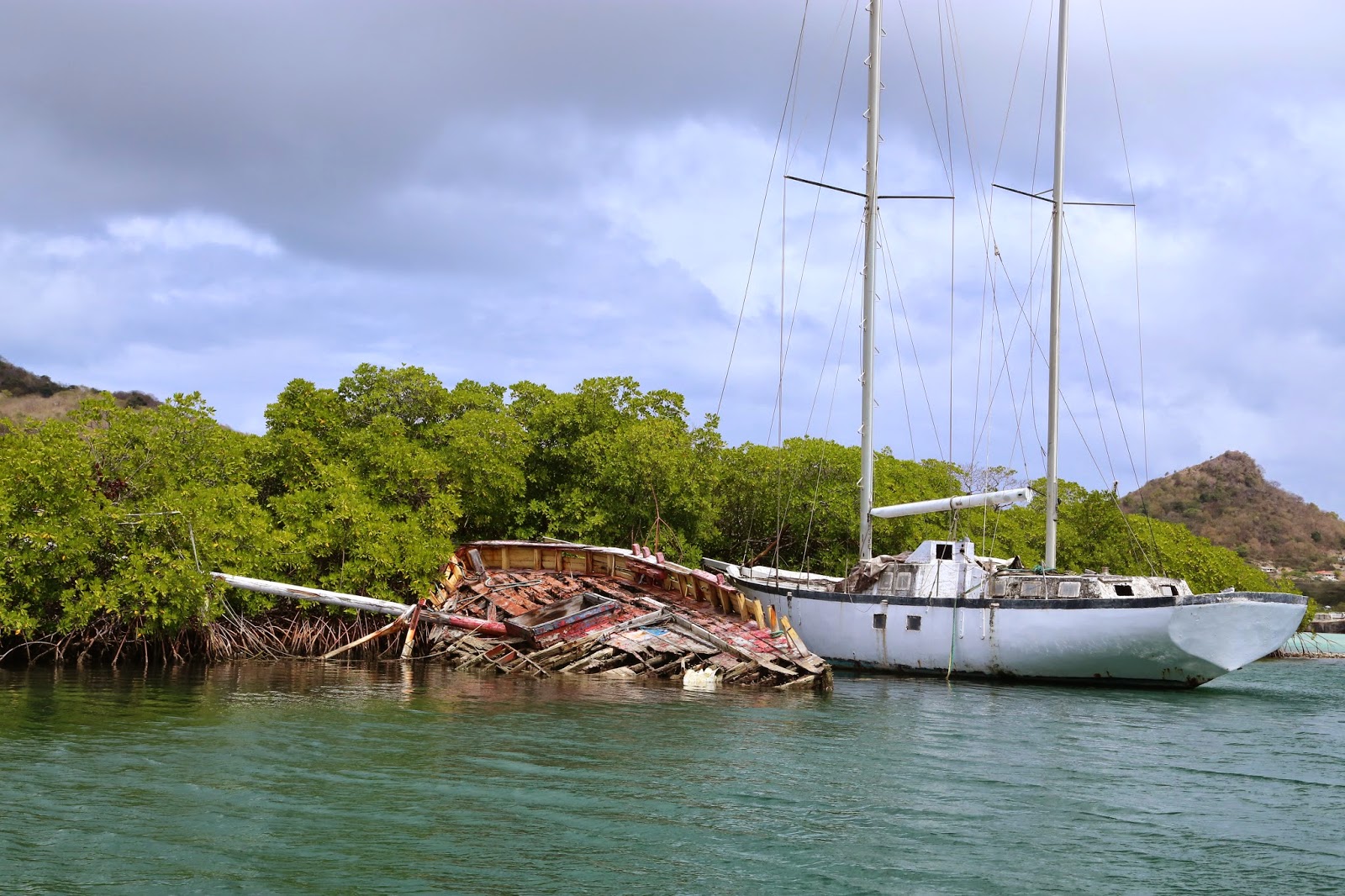 Shopping on these small islands is an interesting experience.  Each little village usually has 2-4 "supermarkets"  none of which are "super" by our American definition.  They are each tiny corner stores that carry a small amount of basics.  Usually we stock at a larger island, that has an actual grocery store, and then pick up a few needed items at the village supermarkets.  Fresh produce and eggs are usually what we run out of and end up buying at the small islands.  Produce is typically not sold in the supermarkets, but at a produce stand.  Tyrell Bay has 1 produce stand.  The large town of Hillsborough on the other side of the island probably has several, but I was happy with the selection at the one here in Tyrell.  On Saturday mornings, 2 local farmers add there fresh produce to the market.  They were each sitting along the main street through the village offering 4-5 different items grown on their property.  I decided to buy some Callaloo from one of them.  Cooking Callaloo, which is a green leafy vegetable a little like spinach, would be a new experience for me.  I remembered reading it well in soup, so that was my plan for it.  A few days later I did get to try it in a sausage soup.  If you don't boil it long enough it can leave a scratchy feeling in your throat.  Mine probably could have been cooked a little longer.  I made the soup in the crockpot after lunch and thought it would get enough cook time, but not quite I guess.  We all had just a slight scratchy throat after dinner.  I thought it was great to try and like the flavor it added to the soup.