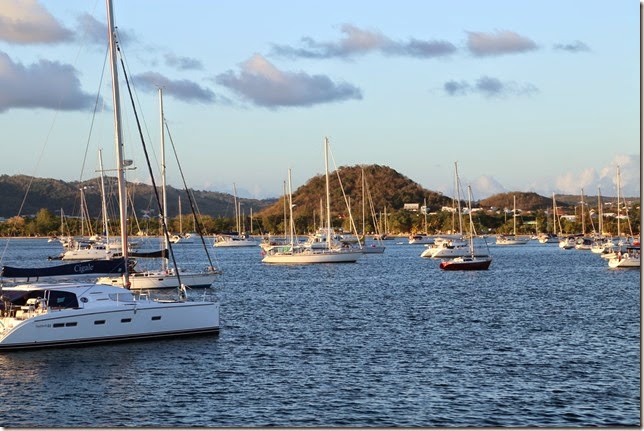 I enjoyed our time in Martinique, David, however has mixed feeling about the place.  There was good and there was bad for him.  I just consider it all apart of the adventure. 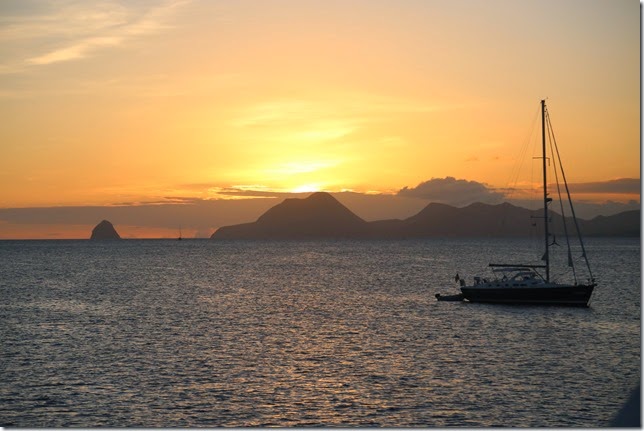 Our first stop was Ste. Anne anchorage, just outside of Marin, one of the largest yachting centers in the Caribbean.  There are A LOT of boats there.  Our plan was to stock up on food here.  Up until now we had been buying a week or so of food at a time.  Last year on our way south we had stopped in Guadeloupe and found the same grocery store we shopped at in Poland, and prices seemed reasonable.  So we assumed they would be similar in Martinique.  But they weren’t, prices were much higher.  It made me wish I had bought more in Grenada or St. Lucia.  But here we are, and in need of food.

We has also wanted to rent a car and drive around the island, but that was proving extremely difficult.  One problem was we were in France, and there is not a lot of English spoken here.  Most of their tourists come from France, rarely do they get English speaking tourists.  After all we are in their country, so why should they speak English?  And we used what little French we knew and got by, but I’m sure we could have made more arrangements if we spoke the language.  So not really knowing French, and working on a French time table (everything closes for mid afternoon), AND it was Easter Holiday, most places were closed Friday, Sunday, and Monday.  Plus, it’s a a holiday, not only are the Martinicans on holiday, but many have flown in and rental cars were scarce.  We were not having any luck getting a car to rent, much less one to fit all 9 of us.

So we decided to move north to the Fort de France anchorage.  Fort de France is the main city of Martinique.  We anchored 3 miles across a big bay from the city near Anse Mitan, a beach town.  From here we were able to take our tender over to Fort de France and check out the grocery stores there and see if we could have better luck renting a car.  This was also a closer spot for getting to church on Sunday.  It was a fairly good anchorage, less roll than closer to Fort de France.  About every hour a ferry would come by and wake us pretty good. On Friday David and I headed in to the city to walk to the large Carrefour Store for food.  We had mapped it and found it was only about 1 mile away.  We took Alexander with us in the stroller so we could pile food onto the stroller for the walk back.   We found the store easily and the prices were still high like in Marin’s stores, so rather than stock for the next 2 months, we followed suit of what we had been doing, and just purchased for the next week or so.

On Saturday we took all the kids and Melinda over to the city to explore the old streets of the downtown area and the park nearby.  We walked the streets full of other shoppers going about their Saturday morning.  The kids had fun playing in the park on a rope swing that went in a circle.  We hoped to find a rental car place open Saturday morning since they had been closed on Friday for the holiday, but no such luck, still closed.  So we opted to take a bus ride out to the mall on the outskirts of town and pick up a few other food items from the large supermarket in the mall. 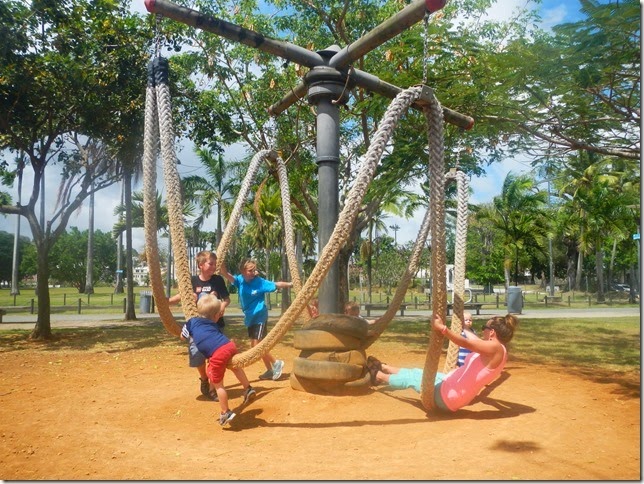 On Monday morning it was time to move up the coast of Martinique again.  Our next stop was St. Pierre. On our way we saw a few boats about a half mile west of us circling around, I hoped for whales, so we headed over to check it out and found they were circling a huge pod of dolphins.  They were little ones, and everywhere.  It was fun to motor through them and watch them swim and jump in our wake. 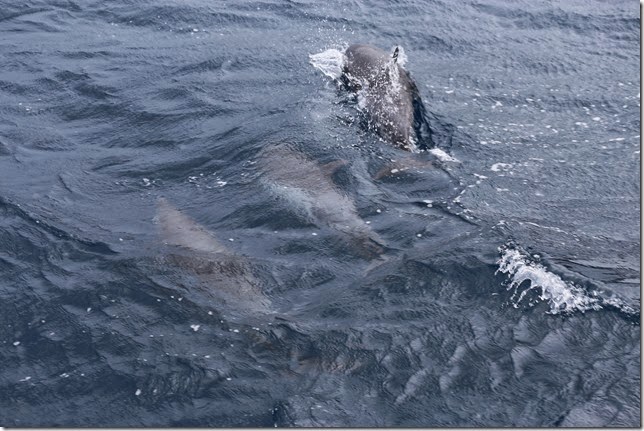 We had been looking forward to exploring this little town of St. Pierre.  It was once the largest city in the Caribbean, till a little over 100 years ago, Mt. Pelee erupted killing almost 30000 people.  The town was destroyed.  Over the years, as they have rebuilt, they have used existing walls or foundations that survived the volcano, so as you walk around town you can see the old grey stone walls that were from a different time, before the destruction. 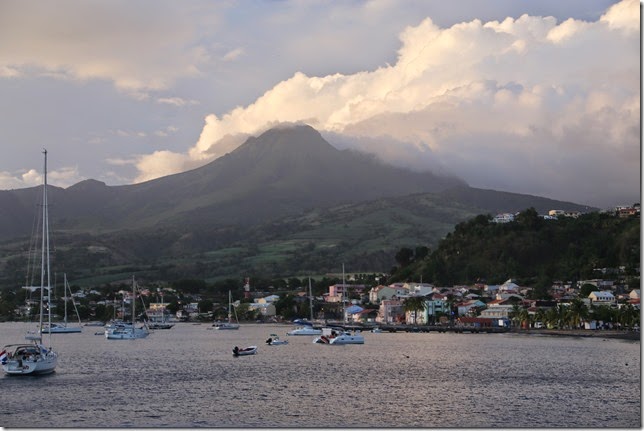 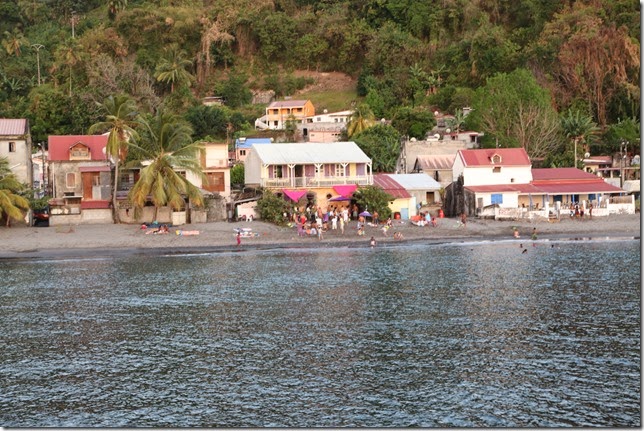 After arriving Monday afternoon, David and Matthew and I went into town for a stroll.  The rest of the kids became too involved in their electronic games that they couldn’t be torn away.  We planned to visit the city again tomorrow anyway because with it being Easter Monday we expected most of the town to be closed up.  Most shops were.  We strolled up the one way streets and found the ruins of the old theater and Jail.  We read about the prisoner who survived in the jail and later joined the American circus.  We enjoyed our little stroll and on our way back to the dock where we left the tender we met a family also living on a boat, anchored out near us.  They were originally from Australia and had 3 kids the same ages as ours.  The kids were playing at the beach, so after chatting for a few minutes we went back to our boat and gathered up our 3 the same age, and David took them back to play with the other kids for an hour or so.  The kids enjoy meeting other boat kids and making new friends, they were hoping to play again the next day. 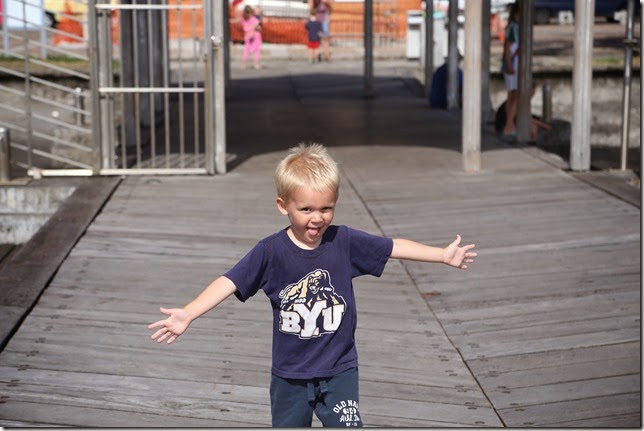 I was worried the St. Pierre anchorage would have more swell, and I was right.  We rolled quite a bit that night, I was so glad we hadn’t moved up Sunday night.  I had to use an extra pillow to brace against to sleep more easily.  I was ready to go ashore in the morning. 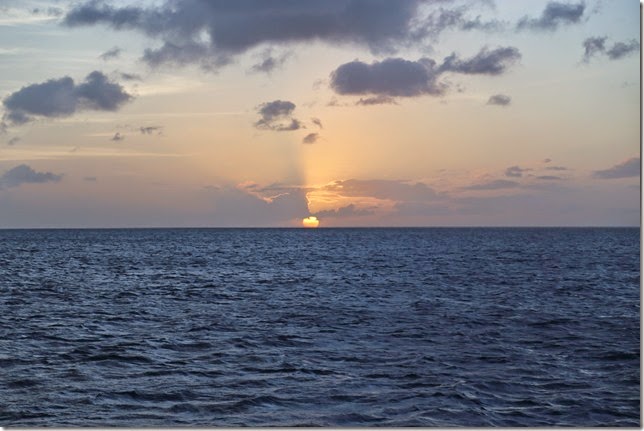 The night before we received a phone call from a canyoning outfit that we had called about possibly going canyoning with.  They wanted to know if we were still interested—they could take us tomorrow, they had a cancellation.  They would pick us up in town for a few hours of hiking the rainforest and repelling thru waterfalls.  (see my separate post on these adventures).  I was a little concerned leaving Melinda and the younger kids for so long without a way to get a hold of us, and on the rolling boat.  She said they would be okay, she didn’t think it was rolling too bad.  Canyoning was the highlight of our visit for David. 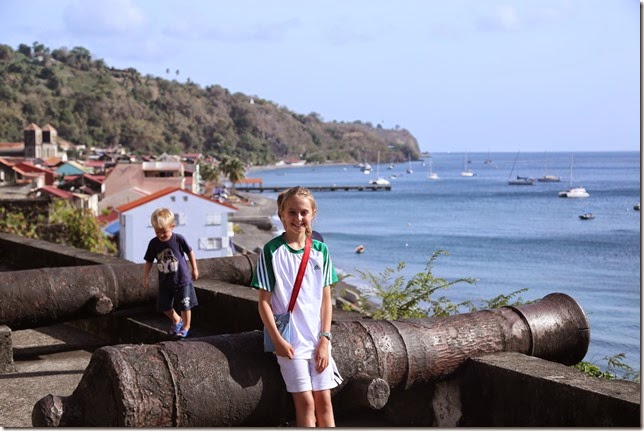 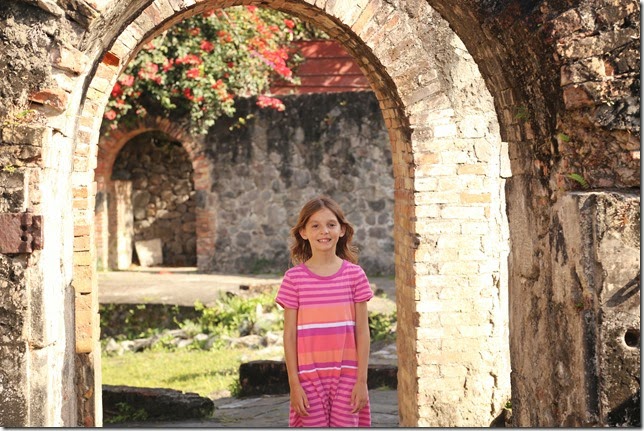 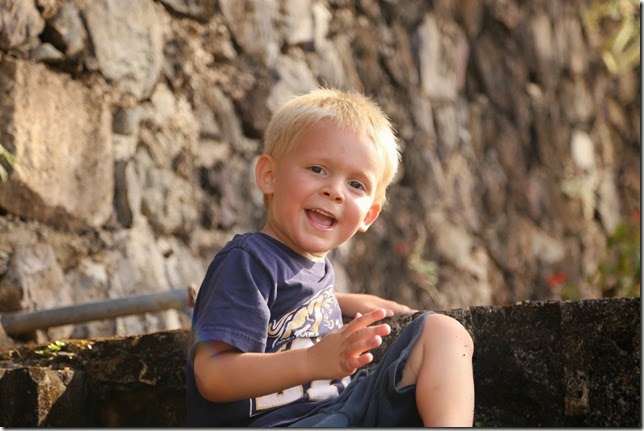 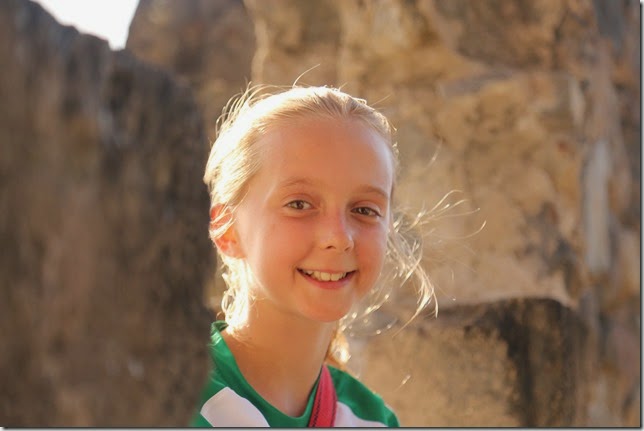 After our morning of canyoning, we grabbed a quick lunch and took everyone in to the Volcano museum and to see the ruins.  We had a nice stroll together and it was interesting to learn more about Mt. Pelee and the town before and after the eruption.  The ruins were a great place to take photos.  I wish I was a better photographer, and dressed my kids better. 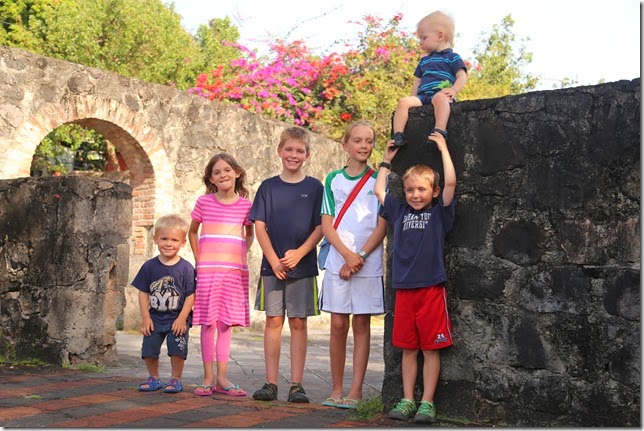 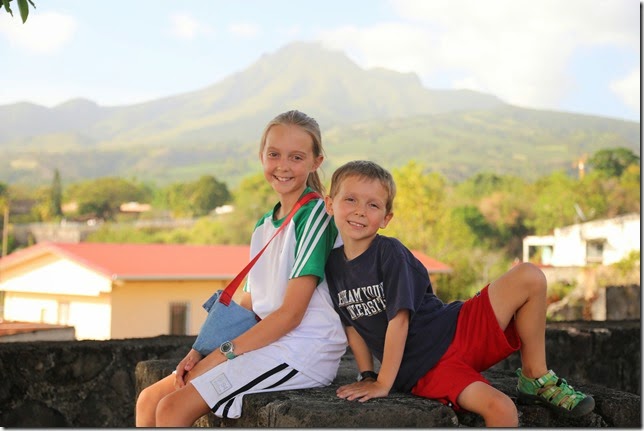 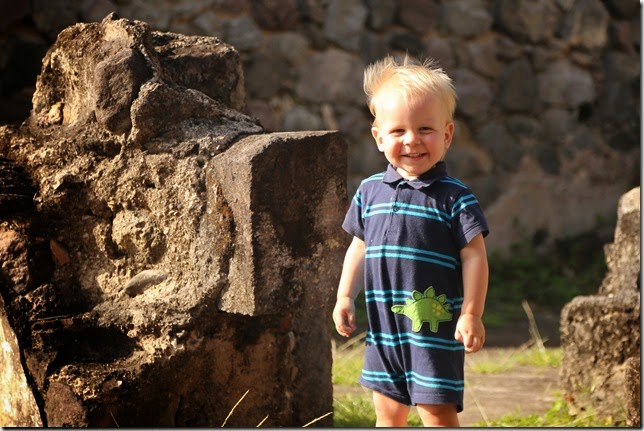 We would leave the next morning and head to Dominica, but as we walked back to the tender, I realized we hadn’t cleared out of Martinique.  David quickly sped back to the boat while the kids played with their friends, who we ran into on the way to the town dock.  After a quick trip up to the tourist office where the customs computer is, we found the office had closed at 3pm, another downside for David.  We had missed our chance to clear for the day, big bummer.  We would have to wait until morning and they didn’t open until 9am.  If only we were heading to another French Island, they wouldn’t care if we had cleared here or not, but in Dominica we would have to face a customs and immigration officer so we decided it would be best to wait in the morning until the office opened, and then head for Dominica.  It would put us a few hours behind on arriving in Dominica which meant getting in and anchoring about dinner time, but it was the right thing to do. 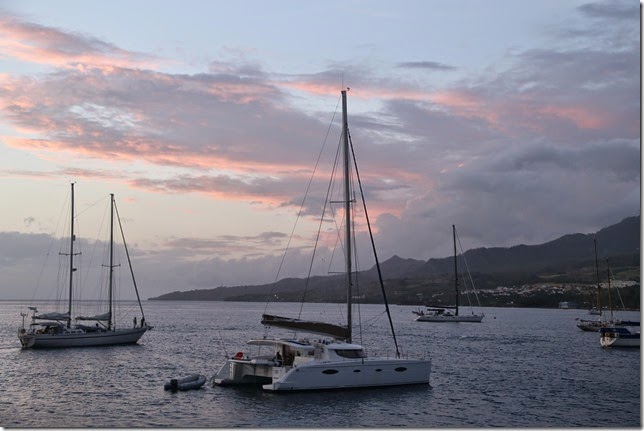 One of my favorite sunsets.