Highborne Cay, our first landfall in the Exumas of the Bahamas.  We started our crossing on a Saturday afternoon, leaving the Florida Keys in 3-4 foot waves.  The forecast had called for 2 foot waves, and we hoped that they would lessen.  About 6 hours later they did lessen.  We had planned to cross earlier in the week, but decided to wait till Saturday when the weather looked nicer and for a longer period of time.  At night it is comforting to see lots of other boats out on the water crossing as well.  We saw a cruise ship all lit up for it’s guests, a few large cargo or freight ships, and several sailboats headed for the Bahamas as well.

The kids slept through the night easily.  And Savannah and Calvin each took a turn on watch with Dad.  Shortly before we entered the Grand Bahama Bank the wind and waves died down and it was a smoother sail.  It wasn’t terrible before, but it wasn’t smooth and nice either.  We entered the bank in the middle of the night and continued on to the Berry Islands.  We arrived at Chub Cay in the afternoon on Sunday, almost 24 hours after we left Florida. 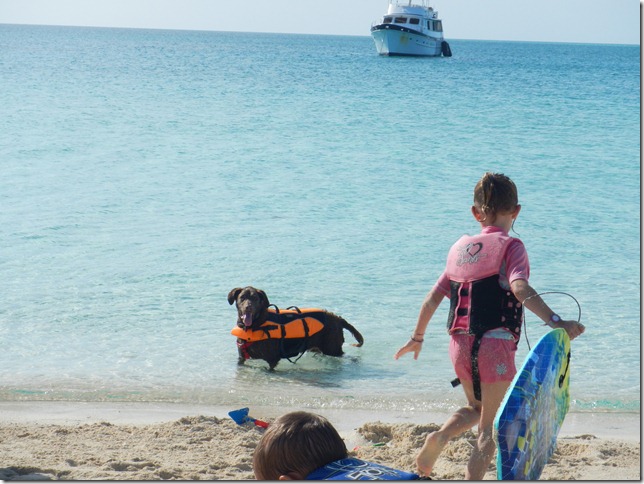 In the morning the manager of the mooring field near where we anchored drove us to the small airport/ landing strip, for a small fee, to meet the customs agent to clear in to the Bahamas.  The only new part for us was hoping they allowed Jessie to enter the country as well.  Otherwise she would have to stay aboard the boat.  We had applied previously for a permit and had received that from the Bahamas but the agent still had to approve the records from the vet, which we somewhat “doctored”.  The permit states that they want a vet health certificate dated within 48 hours of departing for or arriving in the Bahamas.  It’s not like flying, when you have a set ticket date and can see your vet the day before you leave.  With a boat, we watch and watch for a good weather window, plus we were anchored off one of the Florida Keys, without a car or way to get her to a local vet.  So we used the Health Certificate we had gotten for flying her to Florida, and scanned it in to the laptop and re-wrote the date so it would fall in the appropriate time frame.  All went well, and Harold drove us back to the anchorage.  Along the way he gave us a little tour of the small cay.  He and his brother own 1/3rd of the land and have considered developing it.  I had asked the customs agent if he was from Chub Cay, and he quickly informed me that –no one lives on this island.  Only people here, work here, but no one is from this Island.  It is a small Island and aside from a pricey Marina and a few condo’s at one end, and the mooring field at the other, there is not much there.

Harold showed us a pretty beach we could easily walk to, so after lunch, chores, and school, David and I took the older 4 kids to the beach for an hour.  Along the way we met up with 2 other boat families that joined us for our trip to the beach.  Their kids were a little older than ours, the youngest in each family was 10.  Calvin and Savannah enjoyed talking to them.  We had a nice break playing in the sand and chatting.

The next morning, before the sun was even thinking of getting up, we were up and working our way out of the anchorage to head to the Exumas.  It was a little rough in the morning.  The waves were a little bigger than we were hoping for and it was windy out.  But 2 hours later it had settled down, and maybe we were in the lee of Nassau, but the waves and wind were calmer.  We enjoyed our little tour of Nassau as we passed close by, and headed out to cross the Yellow bank and arrive at Highborne Cay late in the afternoon. 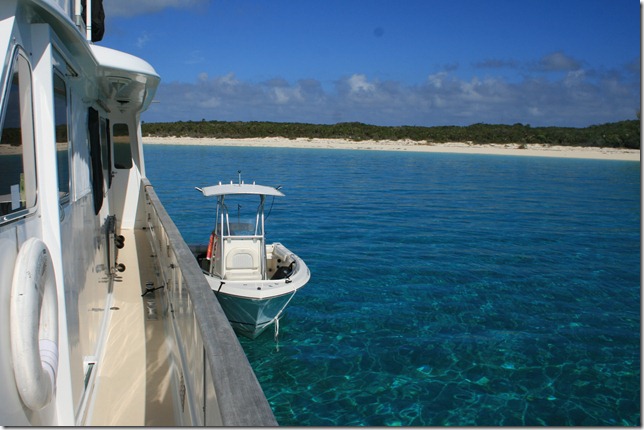 Highborne is on the northern end of the Exuma Islands.  We anchored with 7 or 8 other boats about 200 feet from a nice sandy beach.  Shortly after setting our anchor, David dropped a rope in the water and it sank below us.  He had Calvin jump in and go get it.  I teased Calvin to watch out for the sharks.  A few minutes after Calvin climbed out David looked down at the water and said he thought there was a Stingray under the boat.  He looked again and said, no, I think that’s a shark.  It swam out to the side of the boat and so we got a better look at it, and sure enough it was a nurse shark.  Calvin thought it was funny because of what I had been just teasing him about.  Nurse sharks are not aggressive and usually very shy.  Madison then mentioned that she had seen off the back of the boat while we were setting the anchor.  It was pretty cool, to just arrive and see sharks hanging out to say Hello.  Benjamin came and waved at the shark and said Hi to him.  He told the shark he knew he was nice.  Last spring he was very scared of sharks, so it was nice to hear him getting over his fears.   We took a quick trip in the tender to check out the small marina on the Island, and visit the anchorage in the Islands just north of us.  It was then getting dark and time to head back and have dinner.  The next day, David and I went into the marina to see if they had a Batelco (Bahamas phone data sim card) and for some bananas; we bought 11 bananas for the low price of $10.  The kids ate them all by the next day, so it was worth it.  The marina is all that is on this island, nothing else for miles and miles. 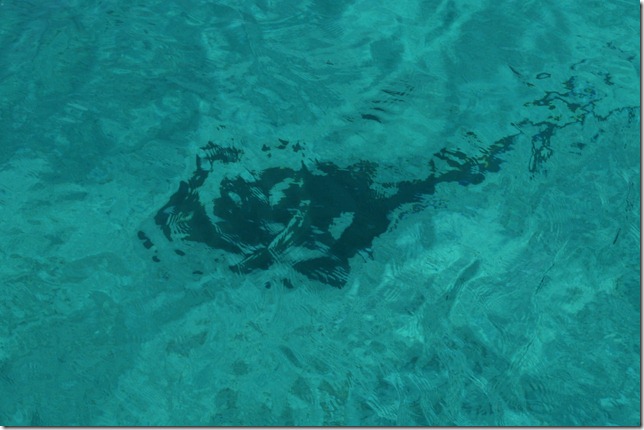 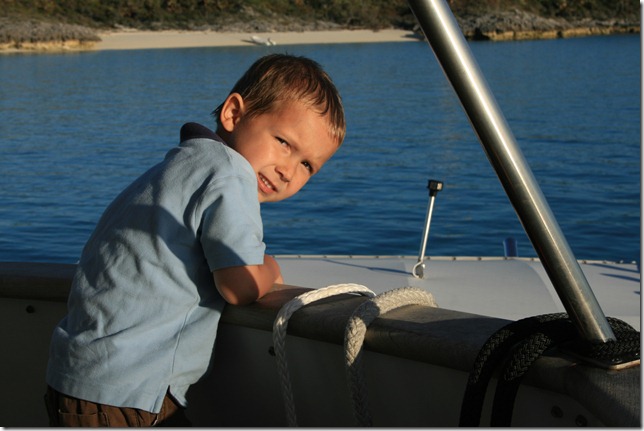 The kids hurried thru their school work so we could spend the afternoon on the beach.  Jessie swam from the boat to the beach to get in a good exercise.  We did a little snorkeling nearby, and then swam from the beach to the boat—that’s how close we were. Along the way I saw a Conch shell walking along. It’s snail inside was making good time walking along the sand under the water. 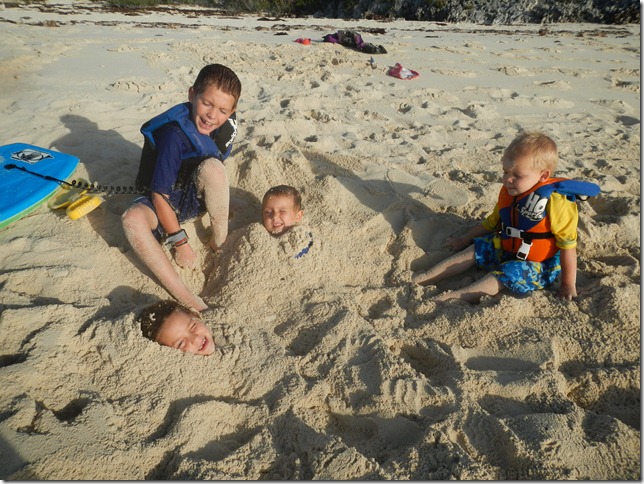 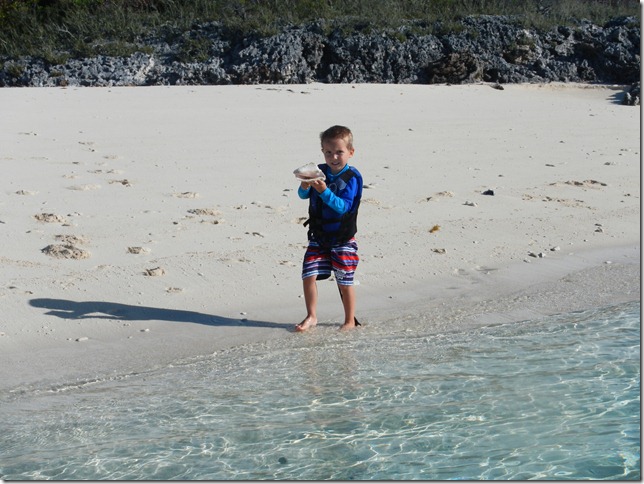 The next morning we took a field trip to a beach 2 miles north of us to see the Rock Iquanas. As we pulled up to the beach they all came out.  Some were 2 feet long, not very big, but there were so many of them.  The fast tour boats bring tourists out here from Nassau and they feed the Iguanas, so they come to the beach eagerly hoping for food.  We didn’t bring them any, but when Calvin or Isabel would crouch down the Iguana’s would come forward towards them thinking they had food. 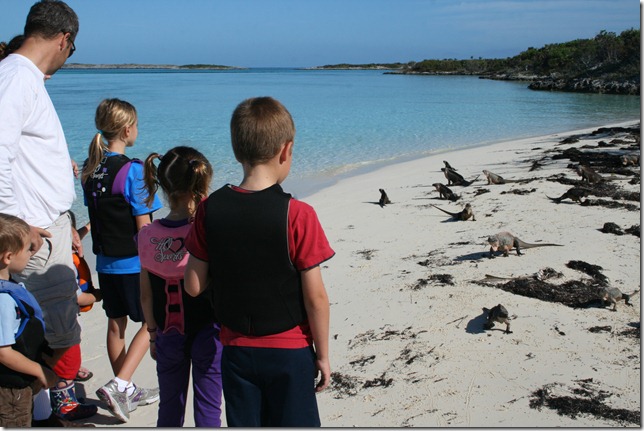 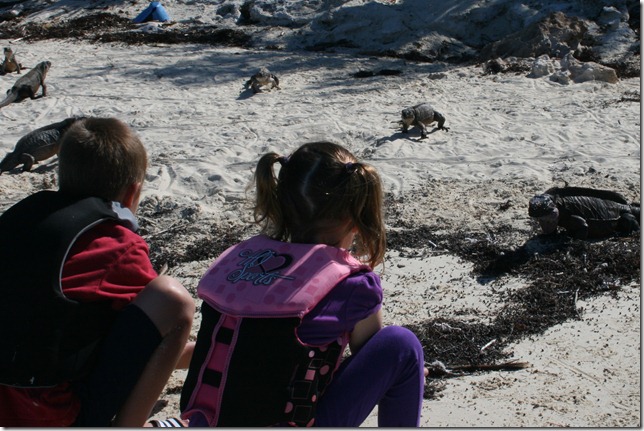 That afternoon we put the little kids down for naps after lunch and took the older kids out for a snorkel. Even Benjamin did a great job snorkeling.  It was a fairly calm day so we circled the cay on the outside to see how the new tender handles the ocean waves. On the east side of the Exhuma’s is the sound, where it is thousands of feet deep—good for fishing, and on the west side is the banks, where it is only dozens of feet deep or shallower. The banks side is where we see the gorgeous blue water colors and sand bars appearing at low tide. After our circle around the island, we landed back at the beach by the boat. We played in the sand for a bit and then again swam back to the boat.  This time the kids hung out for a bit on their boogie boards playing in the water off the boat.  Jessie got in to swim with them and practice using her water ramp and the stairs. 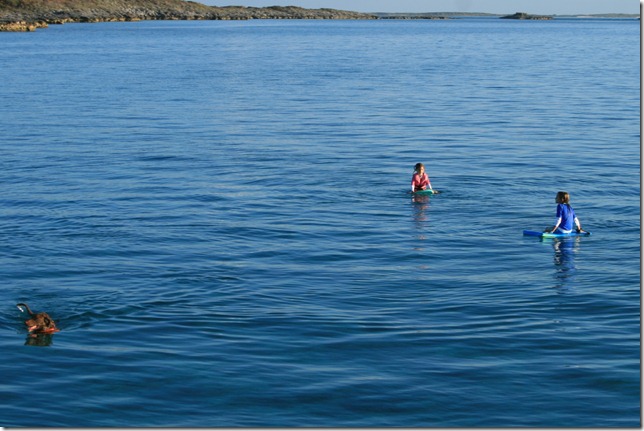 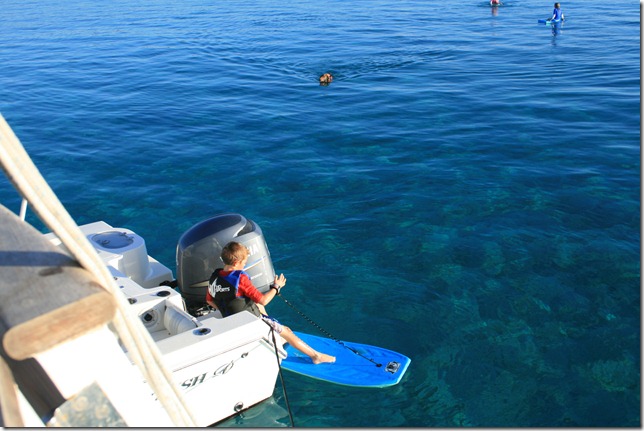 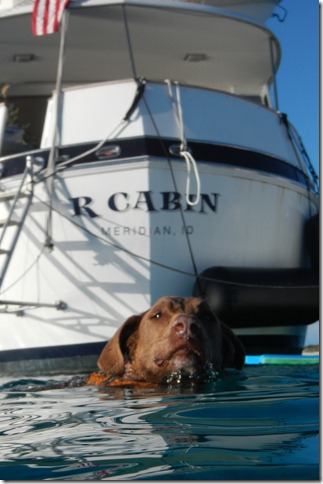 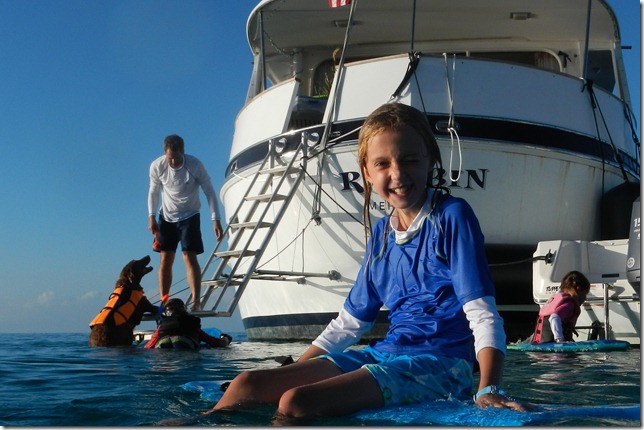