I had a few things on my “Must Do” list for the Dominican Republic.  #1 See the Whales.  But the whales won’t arrive till mid January, and another 100 miles east of where we currently were.  #2 Go to the Rainforest and the 27 Charcos.  This was something I had read about in a guide book.  And coincidentally the few chapters in the boating books for the area also mention it.  So we decided it was something we should definitely go and do.  We had been watching weather to see when we could move further east along the DR coast, so David said we’d better go to the waterfalls now rather than later.  So off we went.  We took a taxi—and paid more than we thought was fair, but frank got us there and back, so we can’t complain about that.  Had we walked out to the street from the Marina, I am certain we would have gotten a better deal, but having just arrived the evening before and not really acquainted with the area yet, we didn’t know.  So off to the waterfalls in our $80 taxi.

It was a 30 minute ride up into the rainforest and the Rio Damajagua.  I had read kids should be 8 and up, but felt certain this was something Isabel could do and would have fun.  So we brought her and Savannah and Calvin.  And of course David, Doug, and myself.  The other 3 kids stayed on the boat with Madison where they would spend the day at the Marina Pool. 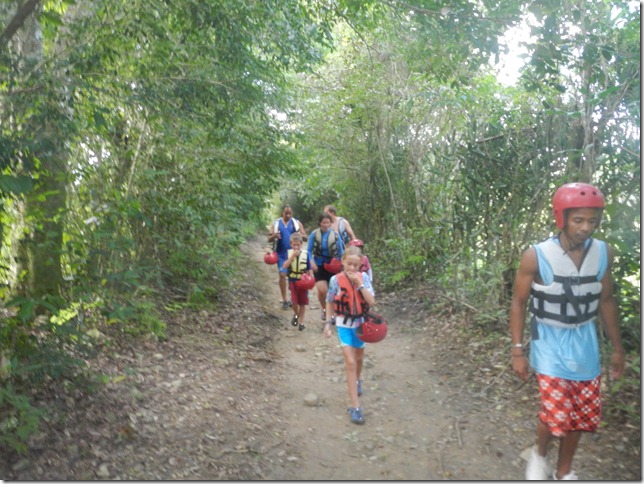 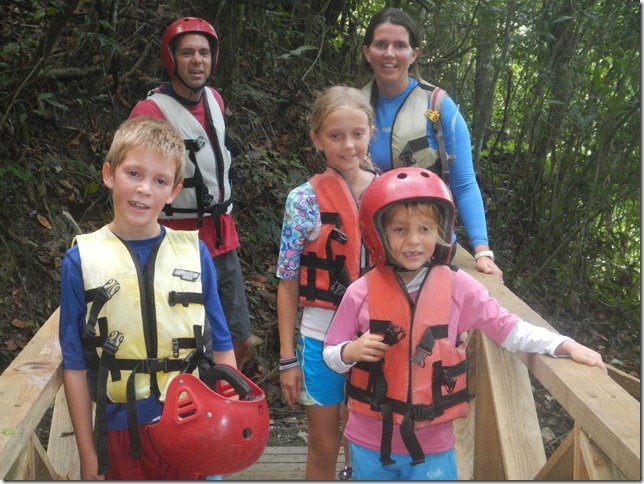 When we arrived and went to pay the guy we paid was concerned that Isabel was too little.  He said “it’s a 45 minute hike”  we smiled and said, she can do that.  Seriously, 45 minutes—who can’t hike that.  Okay, it was mostly up, and I had to stop a time or 2.  In fact Isabel is a great hiker, and had no problems hiking up.  Dealing with the cool water is another story.  She has not body fat so she gets cold easily.  I should have put her in a wetsuit, but didn’t think about it… next time.  On our way up, our guides – Gabriel and Renalto stopped a little way up.  Gabriel had gone off the trail and found some mandarins to share with us.  They were tasty.  They didn’t speak much English, but they were both very nice, and tried hard to understand our questions so they could give us answers.  We learned that they only get to take a group thru one time a day.  Their job is not paid, the only money they receive is a tip at the end.  Renalto even took a ton of pictures for us.  Unfortunately David put it in landscape mode, and that did not work so well with jumping people and rushing water.  We should have had it in sports mode.  SO, we got a lot of blurry photos, A LOT of blurry photos.  But because Renalto took so many,  we ended up with a few that will work. 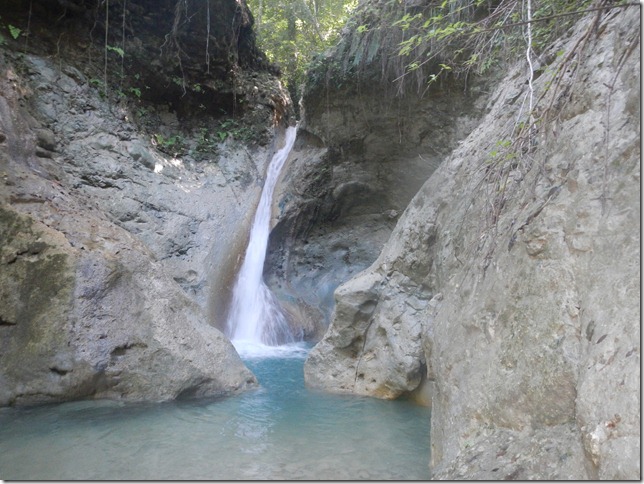 Once we reached the top waterfall, in the river we went.We put on our helmets and tightened our life jackets.  Time for jumping and sliding down.  We started at the bottom of the 27th waterfall and climbed up just a little to jump.  The water was crashing down over the fall and would push us around. 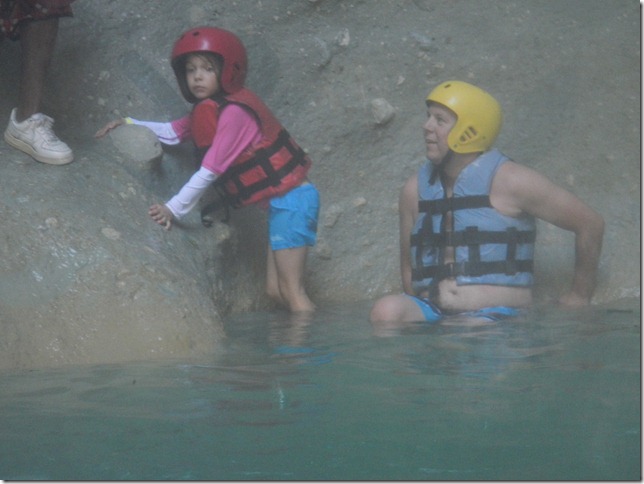 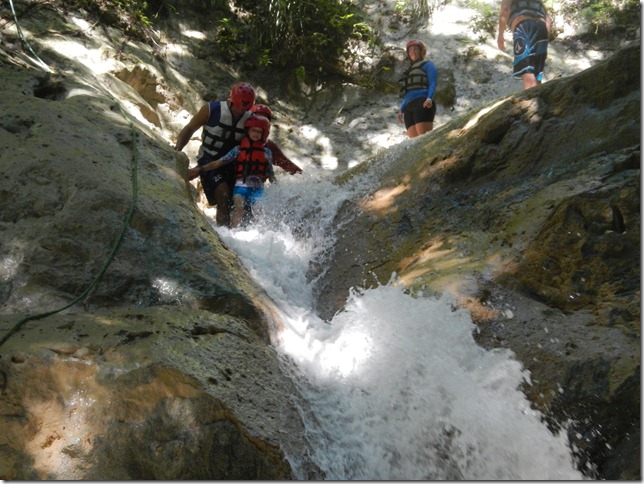 Savannah is a trooper.  The mind is a powerful tool.  She was quite scared about this expedition.  The 27th waterfall was just a little jump compared the slide of the 26th fall.  The 27th was really like jumping off a 3 foot rock into the pool at the bottom of the fall.  But the 26th…  well that was a serious slide.  Savannah didn’t like the 3 foot rock jump, and was already setting her mind against the remaining 26 waterfalls.  Rather than have an argument and ruin the whole trip, which is where we were headed—to force her to have fun. Instead I took this approach-- I told her that we would keep her safe.  She didn’t need to worry about not being safe.  I told her that we came to have fun, and we wanted her to have fun. Some things in life can be scary but if we don’t try them we might miss out on something great.  I told her that we knew this would be something great and would be a good lesson for her to learn that sometimes taking the risk is worth it.  I then asked her how we could help her have fun.  She didn’t know what to say.  She was getting worked up with fear.  A lesson I learned a long time ago – rewards (bribery) works. I asked her if thinking about going out for ice cream later could help give her happy thoughts. When she didn’t respond,I suggested we could take her out to dinner… and she asked “where?”  ahh ha!  I knew I had her.  We agreed on a dinner date with mom and dad.  And while she was still nervous, she was no longer complaining and saying she didn’t want to do it.  She was trying, and then she began to have fun.  She realized after a few more falls that this was just like the water park back home… but better.  it was all natural. 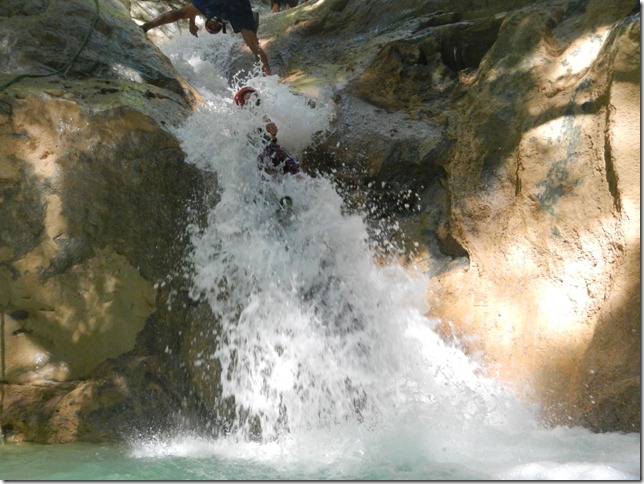 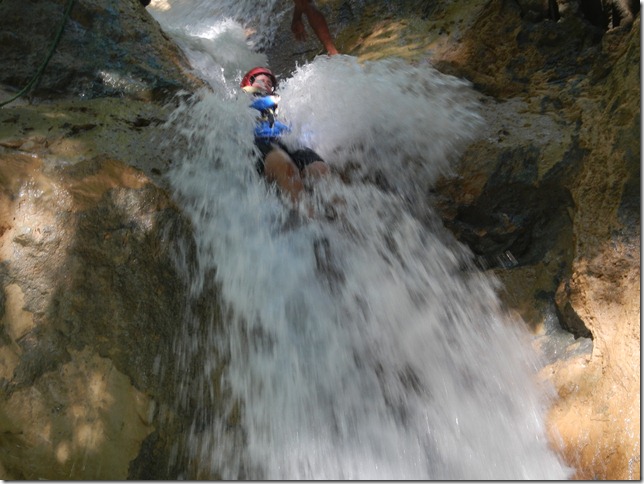 So back to the 26th fall.  it was very cool.  A fun slide and watching from the top sure had me nervous.  The water pushes super fast.  Renalto went down first and waited at the bottom.  Gabriel perched himself securely over the top of the falls and then would help us (by holding on to our lifejackets) get into position to “slide” or taken away by the water, down the fall.  It was awesome. 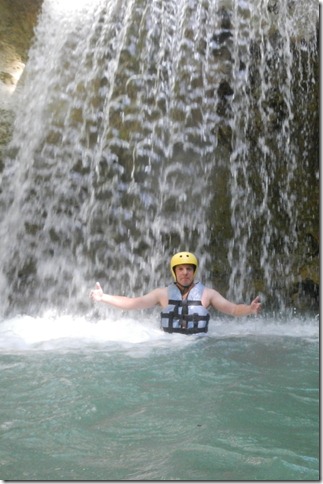 Some of the falls were an easy climb down and swim thru them.  Such was the case with this one.  But we had fun swimming in the pool, trying to overcome the force of the water pushing us away from the fall.

This is Uncle Doug.  He lives in New Zealand.  He traveled 40 hours to come and visit us.  Luckily he is happy to make travel plans last minute.  Which works well for us, because we often don’t know too far ahead, where exactly we will be.  He called us and said he would come, and 2 days later he was on a plane.  Ok, he was going to  take a plane the next day, but it was cancelled due to bad weather.  He was also willing to make last minute travel arrangements to fly back home from wherever we ended up.  The kids loved having him visit.  We hope he will come back sometime! 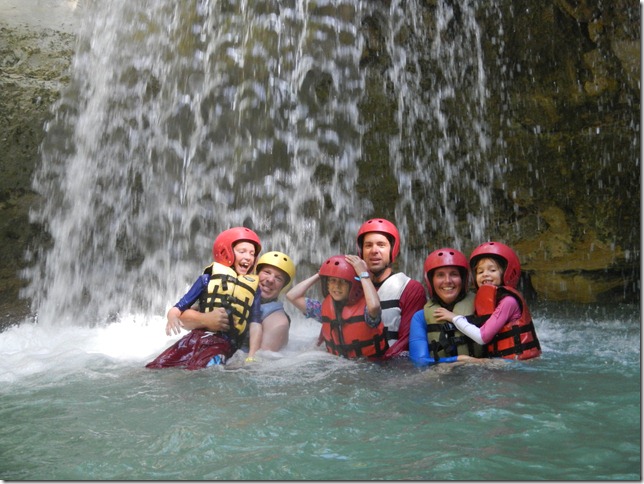 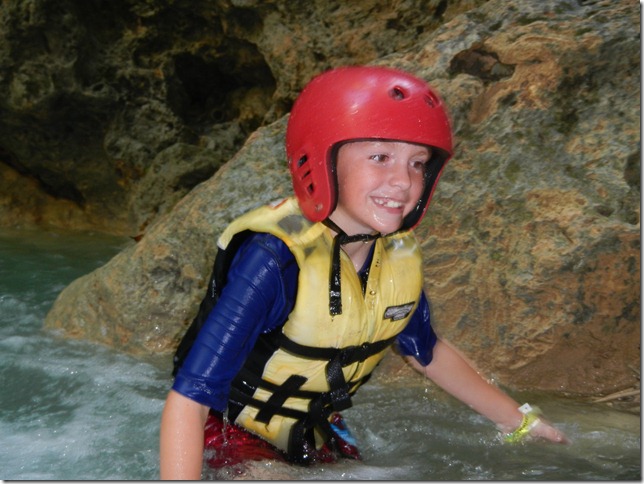 Calvin LOVED everything about this adventure.  He was often at the front of the line waiting for Renalto to get in place at the bottom of the falls, and for Gabriel to be at the top giving him the go ahead. 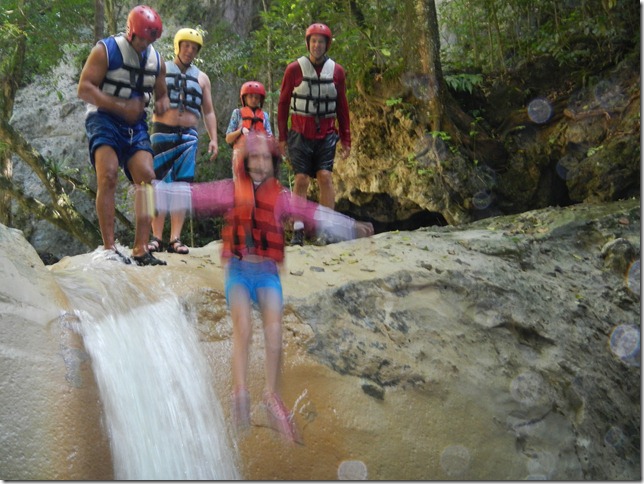 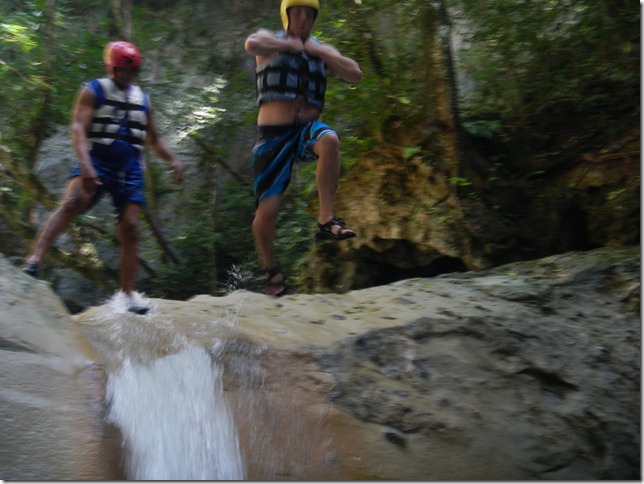 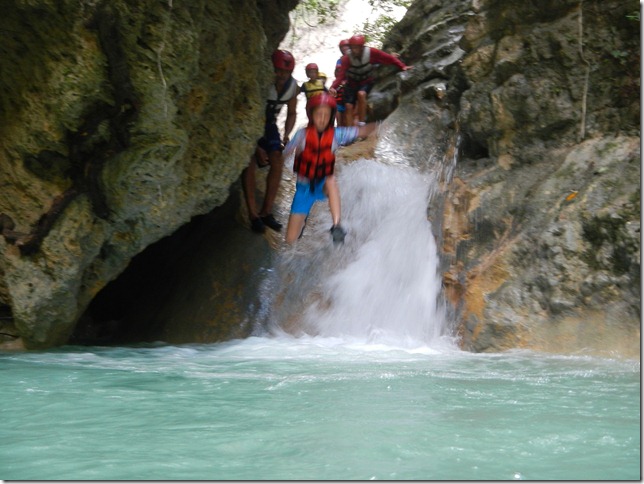 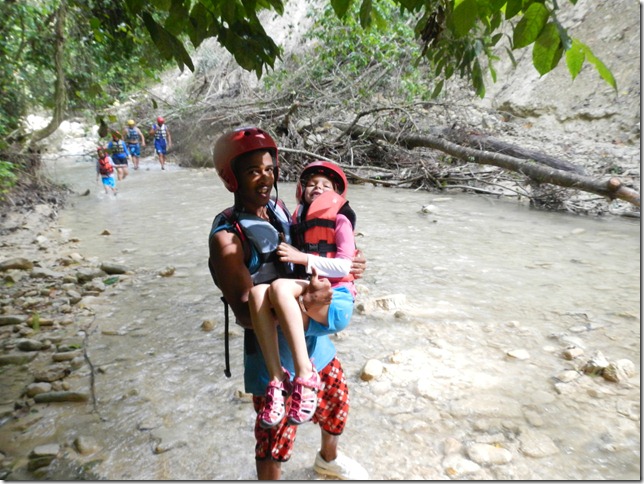 Poor Isabel needs a little more fat on her bones.  She gets cold quite easily.  Next time I need to remember the wetsuit.  She had a great time in spite of all her shivering.  Renalto was a sweet guy and he carried her often downriver.  Sometimes we made him put her down, just so she could move around and warm up. 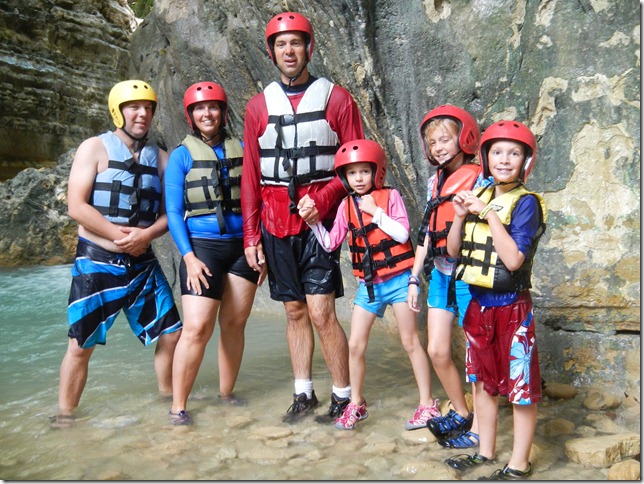 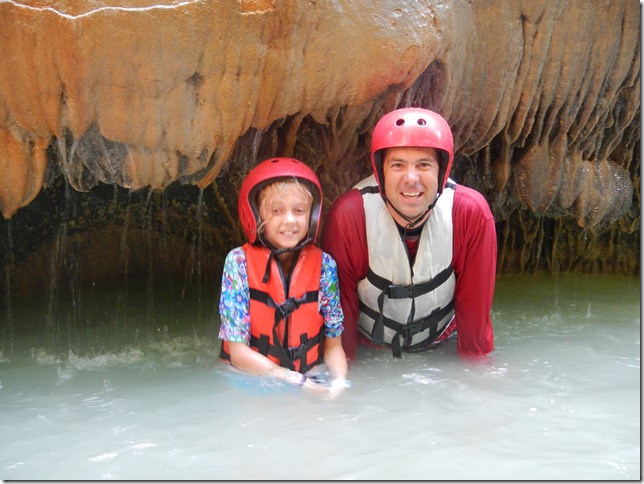 The rock canyon is made of Limestone, and it was so cool to see how the water was affecting the canyon walls.  We went thru a few slots, with narrow walls, and many had cave like walls. 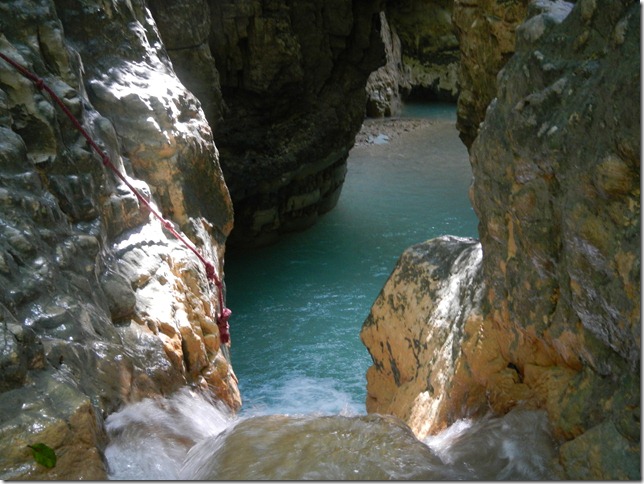 The big drop… 7 meters to the bottom.  Who was brave enough…  Calvin of course.  David and Doug went first.  Then Calvin, but when he jumped he leaned a little forward and almost sort of belly flopped it, but not quite.  He hit the water a little bent though and it knocked a little wind out of him.  It hardly phased him though.  He quickly recovered and was ready for the next one before I even made it down this one.  The 2 girls went down a different easier way as a slide.  I needed to be brave, after all we were teaching Savannah to be brave too.  So I did it.  I jumped the 7 meters down.  It took me a few seconds to gain my composure and jump.   I think I am most scared I am going to trip or catch my feet on the rocks and not jump out far enough and then get all banged up on the way down. I stood at the top with Gabriel.  He would throw a small rock and say there, showing where I should aim to jump and then start counting 1,2,3…  That did not help at all.  He was kind when I needed a few more seconds and he waited a bit and then started over, he threw another little rock and counted again.  That made me laugh because it wasn’t helping at all.  Finally I jumped.  My heart was pounding like crazy. 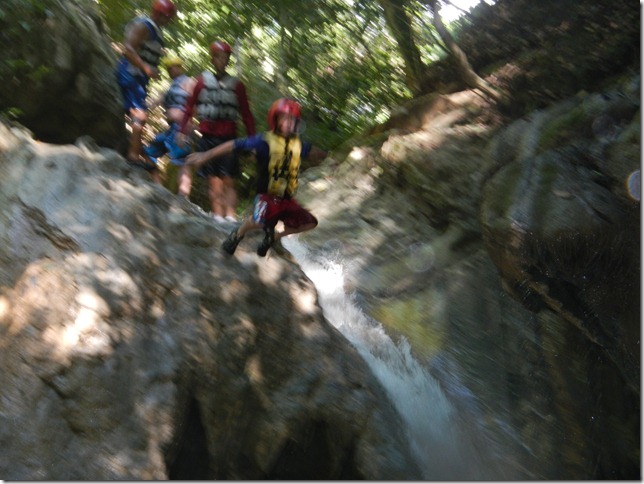 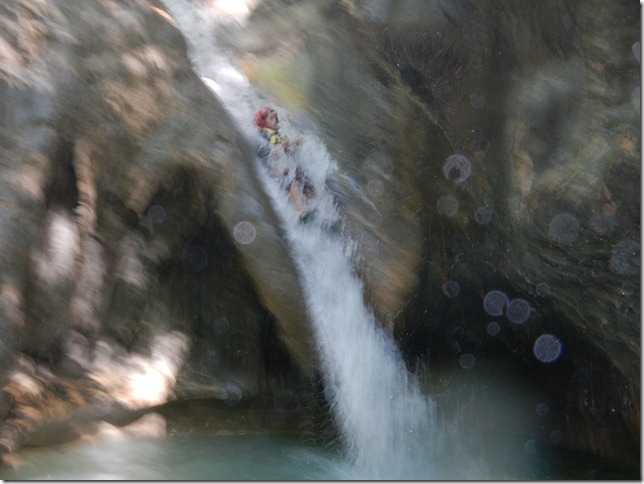 The 2nd to last waterfall we go to do twice.  The first time we jumped it.  The girls climbed down a ladder that was set up.  We used the ladder to go back up and do it again as a slide. When I slid down I found out—Yes, the helmets are needed.  When I came up, I surfaced under a low hanging side and whacked my head on the canyon wall.  It didn’t hurt at—thanks to my thick helmet.  It would have left a bump without the helmet. 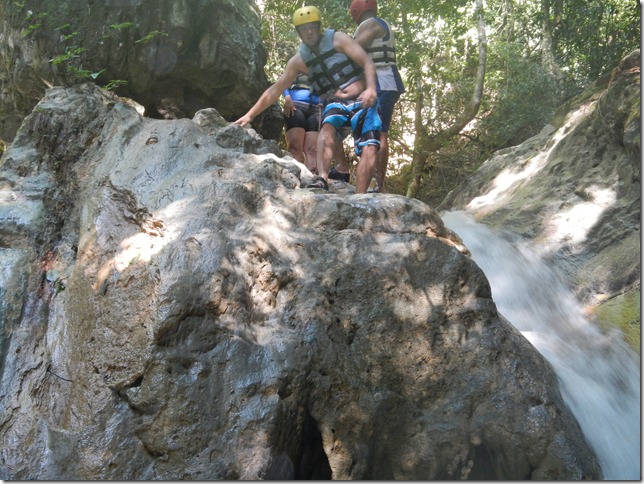 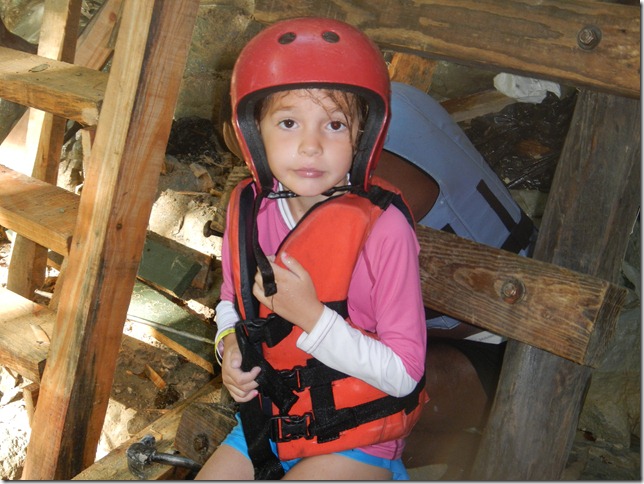 Isabel was glad to get out of the canyon and into the sun.  She quickly warmed up on the hike back to the entrance and talked all the way out about what a great time we had. 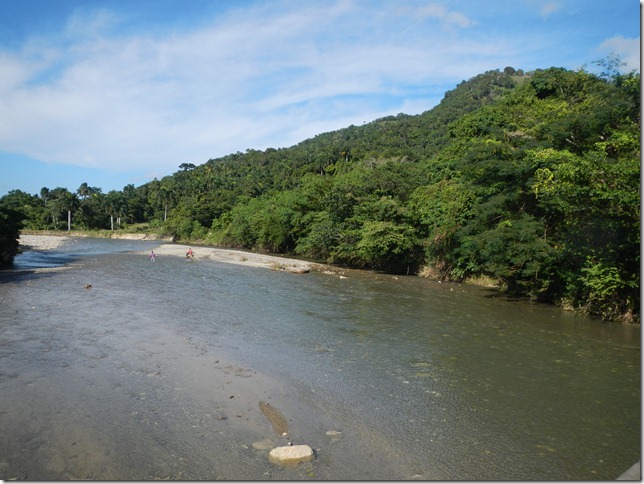 Hidden in this mountain was the 27 cascada’s.  What a great time!  There were 6 of us, and it cost $3000 pesos.  In addition we tipped Renalto and Gabriel $1000 pesos each.  It must have been a good tip, we have seen and heard the people here in the DR ask for more when they feel their tip is not enough.  So a total of 5000 pesos, about $125 USD or $20 USD each.  It was fantastic.  David said he didn’t know it was this kind of trip, apparently I didn’t give him enough details, he thought we were just going to see some waterfalls and swim in them.  He didn’t know it was an awesome adventure.

We were gone for 4 hours by the time we made it back to the boat.  I was worried the baby would be starving, or have been crying all afternoon.  But Madison said he was a good boy the whole time. That’s good, because a little while later we left him again with Madison and fulfilled our reward to Savannah.  She did a great job, she changed her fear into a positive attitude and ended up having fun without us forcing her.  After a little planted thought, she kindly invited her 2 siblings and Doug to also join us for dinner at the restaurant at the Marina.  Savannah and Isabel had fun getting dressed up to go out to eat.  It was a fun night too.