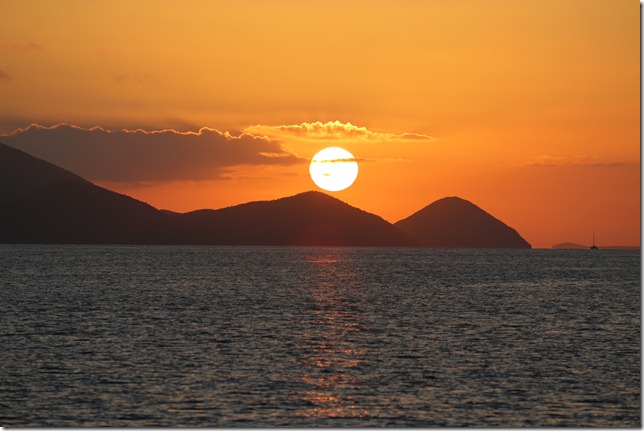 Oh Boy!  Where to begin.  The Blood family left on the Wednesday before Easter.  On Thursday our best generator broke.  The exhaust manifold was done for.  We were able to use our other generator, but it has issues.  It has a small fuel leak and a problem with the voltage regulator.  But it works, so we could stay put at anchor, re charge our batteries, and enjoy our weekend.  In the meantime, we needed to find a mechanic to look at the broken generator.  Easter weekend was approaching, and the BVI’s were filled with boats, finding a mechanic would be difficult at this point in time.  After reaching out to a friend from Puerto Rico, that works in this area, he recommended a few places to us for a mechanic.  We then made a few calls and found that no one would be available to look at the generator till next week, Tuesday at the earliest. 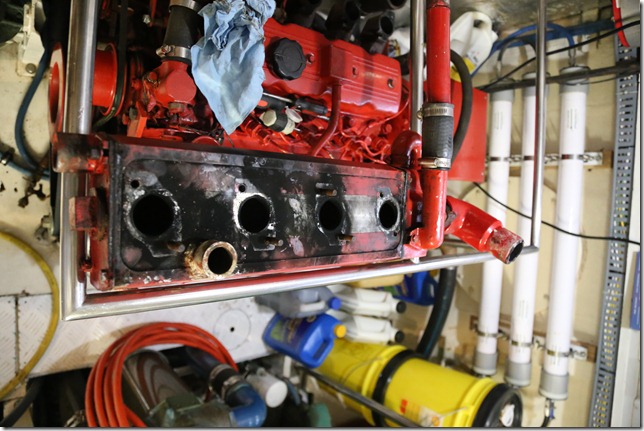 So we started out to enjoy the weekend.  We snorkeled the beautiful water around us.  We were anchored a few hundred feet from a beautiful rocky shoreline, and underneath the water is a colorful landscape full of sponges, coral, and fish.  I saw eels and lobsters, the kids and Madison spotted squid and new fish.  We had no idea what a great snorkel spot this was!  We enjoyed it every time we jumped in for a look. 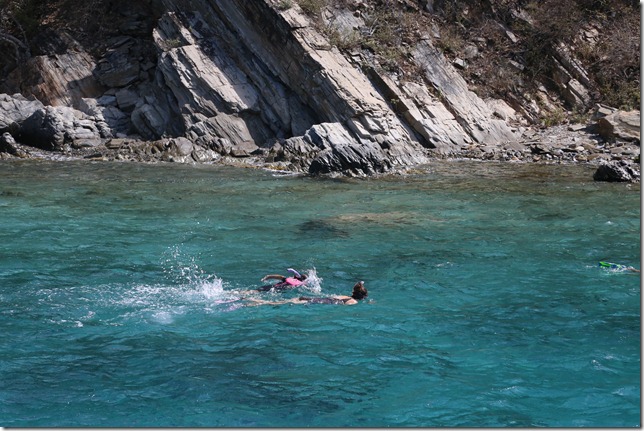 Friday the winds shifted and as the sun was going down we found ourselves sitting awfully close to shore and the rocks below the water there.  We decided to pull in our chain a little, as we were doing this, the motor for the windlass (the device that pulls in and lets out the anchor chain) fell off and so we couldn’t pull in the chain any further, or let more out if we took in too much.  So we decided to set a second anchor off to the side to keep us from swinging any closer onto the rocks.  We’d never used a second anchor before so this was a first for us.  Boaters often use them in certain situations, we just never have.  After dropping the second anchor, we were kept further from shore.  The second anchor was working.  Calvin was very excited, he had suggested we use the second anchor.
On Saturday David went into Nanny Cay, on Tortola to the hardware store, and boat store, Budget Marine, to look for the new screws to replace the ones that tore out of the windlass motor.  David was able to repair the motor, but the screws were bent so we needed new ones to get it all put back together.  They didn’t have the exact screws, but he found something that would work.  He came back and got the windlass put back together working.  But we didn’t adjust anything, we felt happy the second anchor was doing a good job of holding us when we swing towards the rocks on shore. 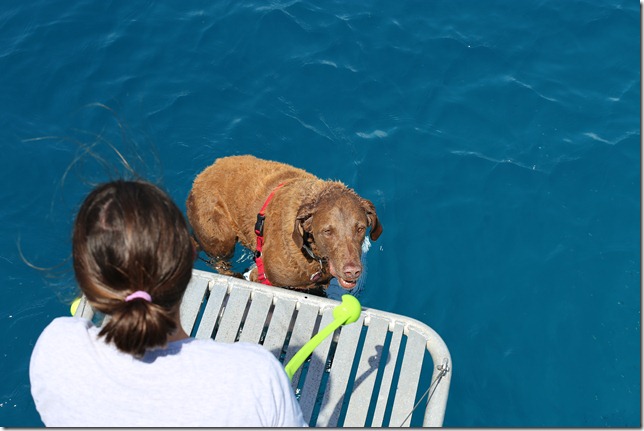 Saturday night, the winds shifted back and we awoke Sunday morning and found ourselves a few hundred feet behind where we should be.  Our only conclusion is that when the winds shifted back to the east, our anchor line was to short and we drug backwards.  We can’t remember ever dragging out anchor before, it was a little unnerving.  We use an alarm system to let us know if we move more than 100ft, but it wasn’t working for some reason, so it didn’t let us know either.  We said a prayer of thanks that we did not drift back into another boat.  We feel very grateful that Heavenly Father was watching over us and keeping us safe.
Since we had to pull up our anchor anyway to reset it, we thought we might as well drive the big boat across the channel, 4 miles, to Road town for church.  Yesterday when David and Calvin went into Nanny Cay by tender they got soaked from the wind and waves.  We were concerned about getting soaked if we took the tender across to church.  We knew the anchorage over there would be really rolly, but we figured we’d show up, drop anchor then head to church, so it wouldn’t matter.
It was definitely rolling.  I worried we’d drag our anchor there, but we put out plenty of scope and set the anchor good.  By the time we reached Roadtown and found a place to anchor and got set, we had 15 mins till church started, and Madison came up and said she did not feel good at all.  I felt bad leaving her on the rolling boat, as I am sure that was the main factor in her not feeling well.  The kids all managed to get ready for church in 5 minutes and we loaded onto the tender for the short trip to the marina dock, and the 10 minute walk to church.  Either Heavenly Father slowed time or they started late, but we arrived during the opening hymn.  It was nice to be in church and learn of the gospel with our brothers and sisters here in the BVI.  The branch here held fast and testimony meeting since the next week will be General Conference.  It was a perfect meeting with wonderful testimonies from the members of the Atonement and Faith in Christ.
On the way to Roadtown, Savannah managed to hail a friend on the radio.  They planned to meet us in Great Harbor at Peter Island, but they stopped at Roadtown as well, so we ran into them as we walked back to the dock from church.  They were going to head over to Peter Island and that was our plan as well, now that church was over.
However, when we got back on the boat, I was in a rush to spend as little time as possible rolling at the anchor, so I sent one of the kids to start the engines while I settled Alexander down for his nap.  I had accidentally left the engines in reverse after I set the anchor and turned them off, and as I was laying Alexander down, I could hear the engines turn on in gear and ran for the pilot house to take them out, but it was too late, we had sucked a line that was still out in the water from the tender into the port side prop.  AAAAHHHH!  What a mistake!   We spent the next 1.5 hours dealing with the mess I had created.  David jumped in the water to try and pull the line out.  No such luck.  So then we tried cutting it out.  He got most of it, but there was still some stuck inside the shaft.  It was just getting later in the day, and I knew the anchorage would start to fill in and I wanted to make sure we got in a good spot so we wouldn’t end up dragging or blowing onto the rocks as the days previous.  So we decided to head over to Great Harbor and work on the line and prop there.  It was easy enough to run the distance and drop anchor with one engine. 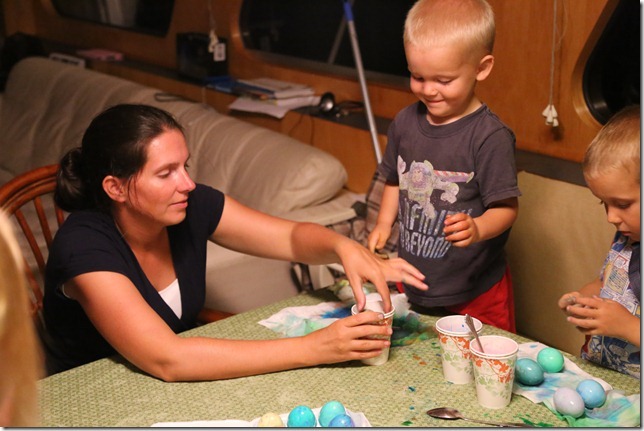 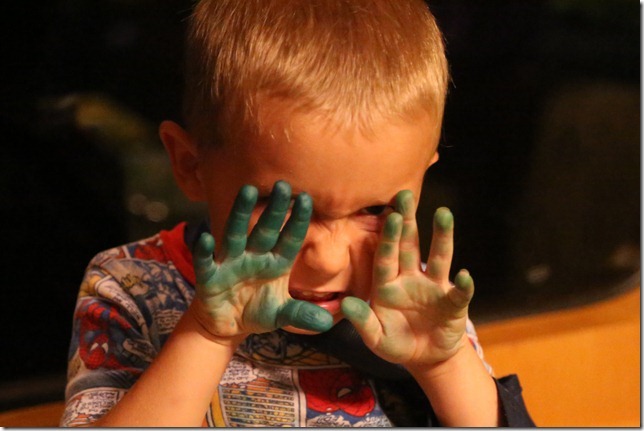 Once we got settled at the anchorage, in a nice, close in spot.  The kids wanted to go and play with Ryleigh.  We had met the family in the Bahamas and left Georgetown at the same time, the day after Christmas.  We are just now meeting up again, a few months later.  The kids were excited to see each other again. I was exhausted after our day, so I was happy to let them play for an hour.  I hadn’t had time to work on an Easter dinner, and decided that we would have Easter dinner tomorrow night instead.  Tonight something easy.  After a quick dinner, we colored Easter eggs and enjoyed the evening together as a family.  The kids were disappointed we didn’t have brown eggs like last year, we only had regular white eggs.  We still had fun and Matthew had a great time dropping the eggs in the colors.  His first year participating in this tradition. 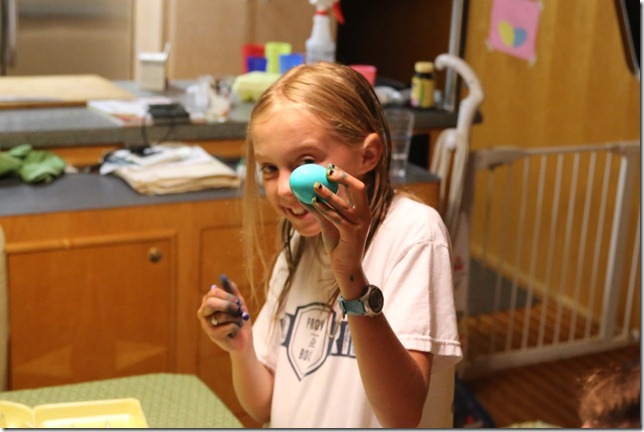 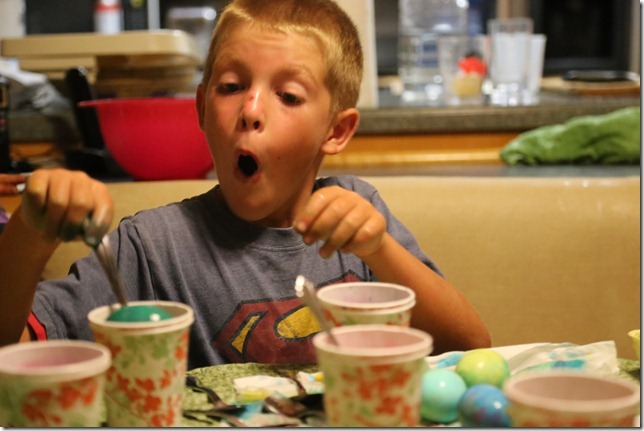 Isabel threw the ball where Jessie couldn’t find it so she had to jump in and get the ball for Jessie, except she wasn’t wearing her swim suit, so she took off her clothes and jumped in naked.  Here she is hitching a ride back from Jessie.

Easter Monday is a holiday here, so no mechanics were available to look at our issues, so we enjoyed the day.  The kids played with Ryleigh after finishing school.  We had a great Easter dinner that night.  And for FHE we watched an Easter video online.  It was a much calmer day. 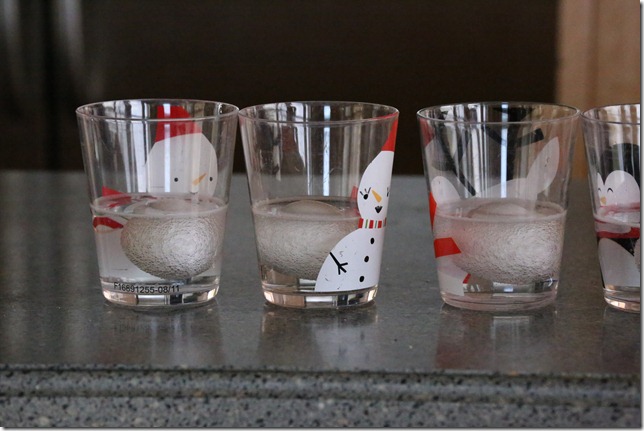 Over the weekend the kids tried making “naked” eggs.  Madison had read about this and so they tried it out.  You take a regular egg, not hard boiled, and put it in a cup full of vinegar and let it sit for a couple of days.  The vinegar breaks down the shell so eventually you are left without a shell, but the egg is contained within the sac.  The egg absorbs much of the vinegar and swells, so it is bigger than before when it was in a shell. It is a pretty neat experiment to play with.  Isabel also dyed her naked egg when we colored our eggs.  Madison said you can also place the naked egg in a cup full of corn syrup and it will shrink down in size. 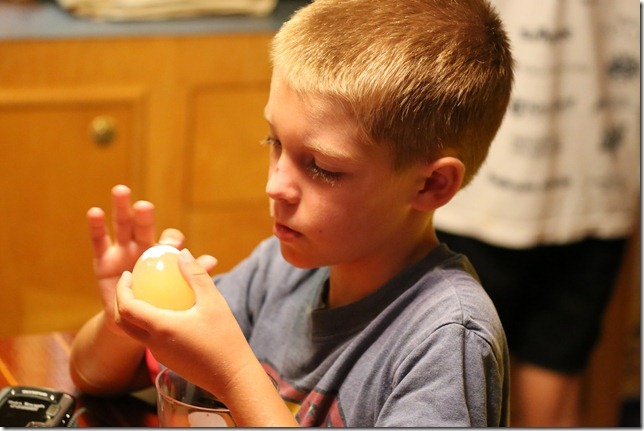 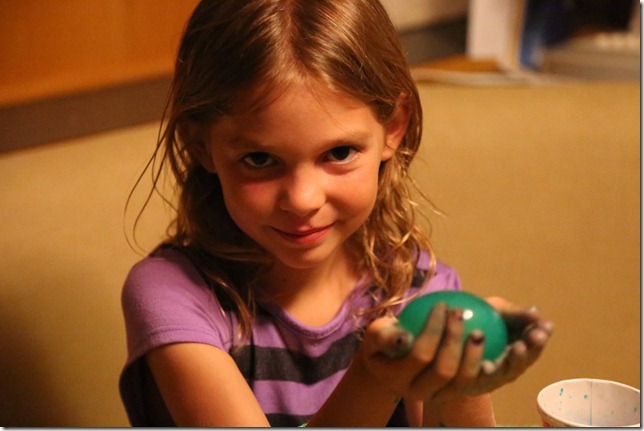