Ever wanted to jump in the ocean at 3am in 6 foot waves with boats circling around you?  Sounds like fun doesn’t it?  No?  Well, there is always an adventure waiting for us…

Our next stop was 85 miles away at Saba, a small Dutch Island.  85 miles at 7 miles (we hope) an hour means at least 12 hours to get there, if not more… probably more.  The best time to do this, so we can arrive in daylight hours is overnight.  While I hate being up all night, or even trying to sleep underway, traveling all night has its perks.  The kids sleep thru it. I don’t have to worry about any of them getting sick, or the youngest two moving around.  If it is calm out then none of the above matters, and the only concern is arriving during daylight so we can see where to drop anchor or pick up a mooring ball. 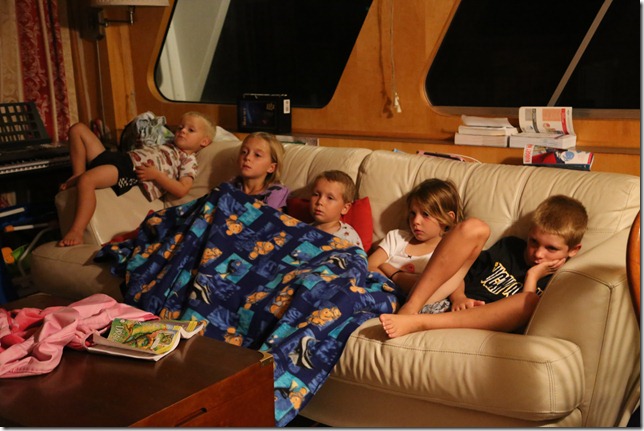 The weather files were calling for 6 foot seas, 6 seconds apart.  It was the 6 seconds apart that had us more concerned.  6 foot waves are fine… further apart.  We were hoping it would be okay.  And it really wasn’t too bad for the first bit.  We left our anchorage a bit after dinner and had the kids settle down to watch a movie before bed.  This keeps them in one place and the mind focused or distracted at least.  Then off to bed and sleep.   And as always, when we get out a ways from land,  it got a little worse.  The kids were all asleep by then, even David was able to get a couple of hours in before waking up from the change in waves.  He joined me at the helm, just in time to help me maneuver around a cruise ship.  I was hoping to pass in front of it, but it is really hard to tell at night and would have been close, so we opted for the safer route behind it.  I was surprised at how much traffic there was on our route, although I guess I shouldn’t have been, we weren’t going too far from St. Martin/St. Maarten which is hugely popular with cruise ships and well, most boats go there.  Not us.  We were opting for the less traveled Saba. 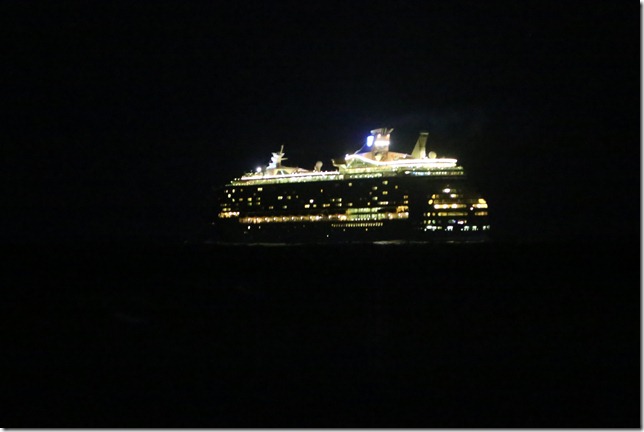 After 1am I headed off to attempt to sleep.  Madison was asleep on the couch, which turned out to be a good thing.  Around 3am she woke up to an annoying sound – the engine alarm.  One of our engines had stopped working.  David was at the helm, but had his super noise reducer headphones on, watching a movie, so he hadn’t yet noticed – and never would have heard—the engine fail.  Madison notified him and he got it working again.  A little while later, Madison approached David again and said she heard a “POP” noise this time.  They looked around, unsure of what it might be.  Since the engine had failed, David had kept an ear out of his headphones and had noticed the radar had beeped a few times, indicating something nearby in the water—usually a boat, but hadn’t seen anyone but us.  He looked back behind us and noticed the tender (the little boat we tow a couple hundred feet behind us) lights were further back then they should be, and he realized the tender had broken free from us, and we were moving on, and it was drifting away from us. 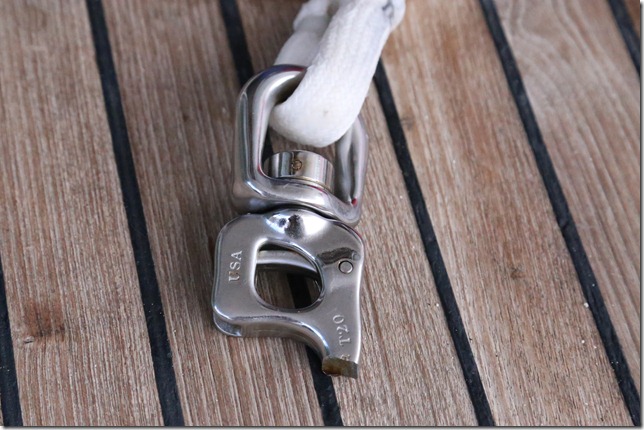 Oh fun.  Madison came to get me, not that I was sleeping in the bouncy boat.  David donned his wet suit and life jacket.  I reminded him to grab a snorkel and mask. I drove circles around the tender while we came up with a plan.   He had pulled in the tow line and found the shackle we use to attach our tow lines together with the tender tow bridle had broken in half.  We were only half way to Saba, which meant we had at least 40 miles to go, so the goal was to reattach the tender and tow line. David planned to tie the line from the tender and the tow line back together with a bowline knot.  My concern was how.  He asked if I could circle close enough that he could have enough slack in the line to tie it, so we wouldn’t have to stop the boat.  Crazy idea.  No way that would work.  We were left with the only option of having to stop the boat close enough to the tender, upwind from it, so he has enough slack in the line to tie the 2 boats together.  Stopping the boat meant we would be subject to the waves, and the boat would rock A LOT.  David and Madison grabbed the few items left out that might fall and break from getting thrown side to side. David put our side ladder on the boat and hoped he’d be able to reach it to climb back out of the water.  Then it was time to take the engines out of gear while David jumped in the water.   Madison was armed with the super bright spot light—her job was to keep it shining on David the whole time—we didn’t want to lose him and needed to know where he was at all times.

He tried to swim over to the tender with the tow line in hand but as I was circling the tow line got pulled away from him of course.  So I swung the boat close enough for David to grab the line again, then we slowed down, upwind and stopped.  It was a long couple of minutes as the waves rocked us side to side.  Before David jumped in the water I had Madison go downstairs and wake up Savannah to let her know what was going on, and that she was to stay with all the kids, in case anyone woke up from the crazy rocking, so she could keep them calm.  She was instructed to leave Alexander in his crib, no matter how much he cried—it is the safest spot for him.  Savannah did great with this task.  The kids did wake up and wanted to know what was going on, and she was there to help them. 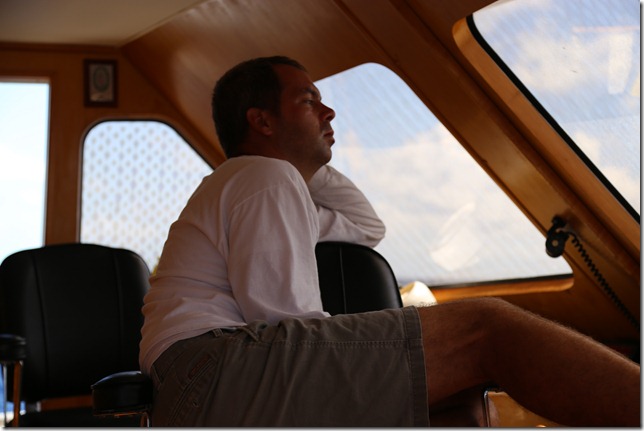 Once he had his know tied, David swam back over to the boat and climbed on board just as we got rocked hard again from the waves.  Happy to have him back on board, I put the engines back in gear and drove off, getting the stabilizers to kick in and work!  Too much excitement for me.  After David showered and changed, I went back to “sleeping” and he took back over at the helm.  Savannah stayed up for a bit to help out, and David could nap just a little with her taking a turn on watch. 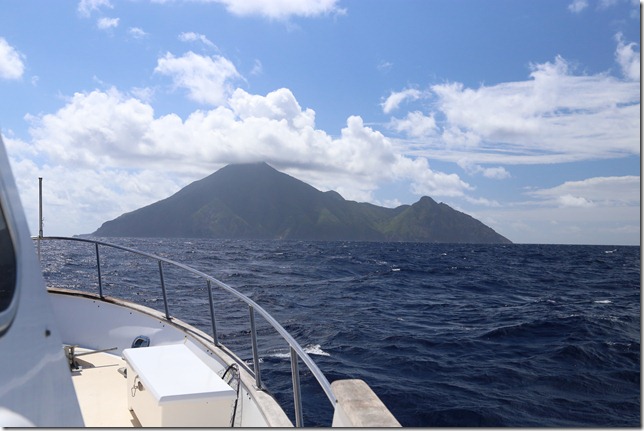 We made it to Saba, sometime after 10am, exhausted.  It is a beautiful island.  The anchorage was not super calm, but it was manageable for a couple of days.  But first thing—naps! 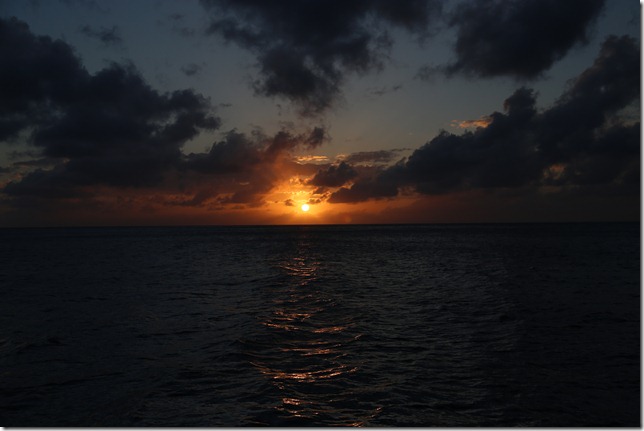