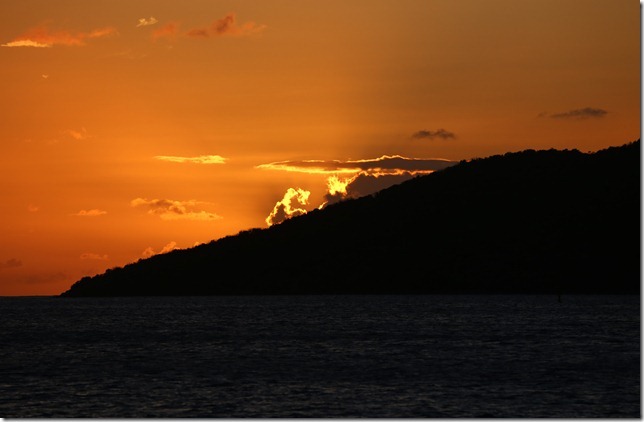 Still waiting for better weather, still thinking about repair parts…  We decided to head up to the North Sound of Virgin Gorda to explore.  We had heard about some fun things to do in the area and that it was a great anchorage.  Well I don’t know about the “great anchorage” but it was pretty and we found some fun things to do while there. Our friends “Hoodwink” joined us for our trip up to the North Sound since they were still waiting for a good weather window as well.  Their next stop was St. Martin/St. Maarten.  It is about the same distance to head there as to Saba – our next stop, but they are 28 miles apart. 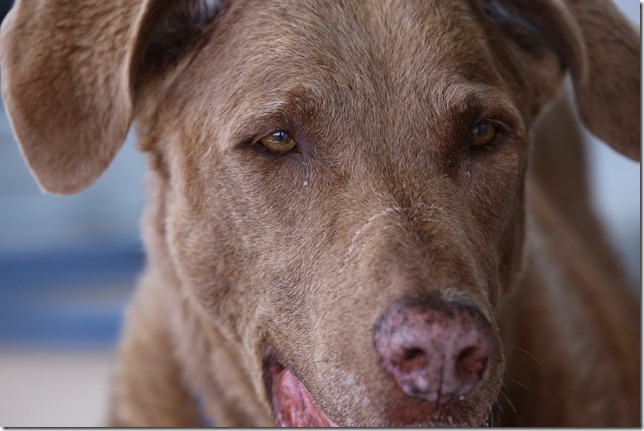 Our first night in the North Sound we dropped anchor next to Mosquito Island—owned by Richard Branson.  I had hoped for a little better protection since it has a nice reef surrounding it’s cove, but it was a little too rocky for David.  It worked out fine for one night.  Hoodwink picked up a mooring about a half mile away in Leverick Bay.  We tendered over and went to the “Happy Aarrrr” We had heard about a one man family pirate show from friends and the kids were excited to try their hand at the conch shell blowing contest.  We had fun munching on french fries and appetizers while listening to the tunes and jokes of Michael Beene.  The kids had fun shaking pebbled water bottles as the pirate played his guitar and sang.  Then came the Conch shell contest.  All the kids gave it a shot, Calvin had his hopes up that he would be the best.  He handled the disappointment well as other kids won the contest. 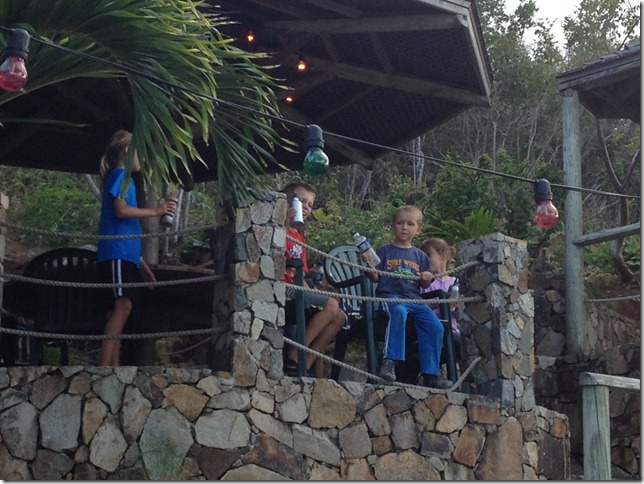 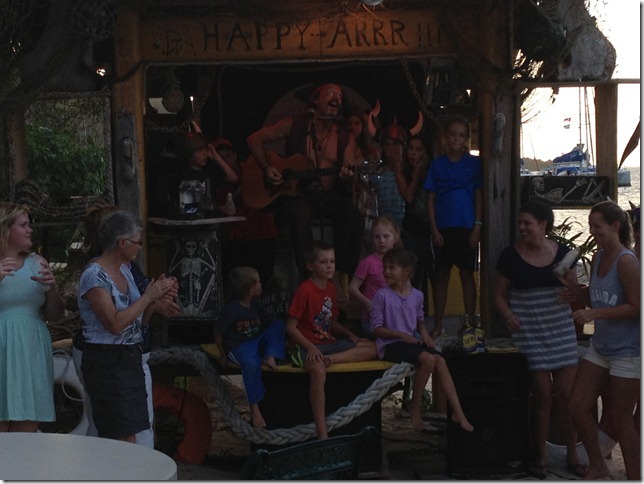 The next day we picked up anchor and moved over to Prickly Pear Island, thinking that would offer us more protection from the winds, but the boat was still rocking a bit.  We were missing our calm and beautiful Peter Island.  David and I went into the Leverick bay dive shop to schedule diving and ended up signing up for the advanced diving course, which will take 3 days of diving to complete.  Our goal is to gain enough experience over the next several months to be able to feel comfortable enough to dive off our boat without a guide.  So the advanced course will help us on our way towards this goal. 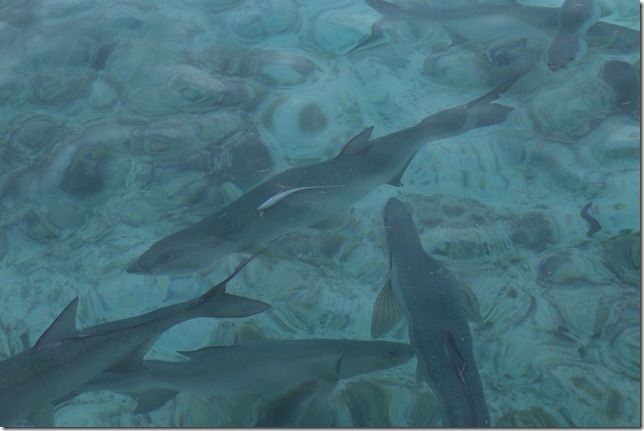 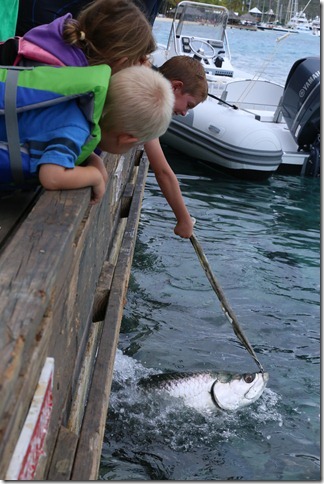 After diving the next day the kids went to the beach with Ryleigh for a bit.  Then David loaded them all up and went over to the Saba Rock resort for their daily fish feeding.  They save the skins and trash from cleaning fish.  The kids then wrap the skin strips around their hands and dangle it in the water for the Tarpon to come and get.  We went back to the fish feeding a second time a week later and the guy running the show asked if some people wanted to jump in and swim with the Tarpon, and Calvin was one of a dozen that took him up on it. They also have a little shallow pull where they keep starfish, sea cucumbers, and a moray eel, that they also feed at that time.  The nice guy lets the kids take turns feeding the eel on the end of a rake.  Eels are beautiful to watch swimming, like flowing ribbons, but they have the ugliest faces.  He even pulled out some lobsters (someone’s dinner later) for the kids to hold and see.  They were alive but had been in the fridge, so they were slow moving.  The resort also had a few Toucan’s in aviaries.  They were beautiful to see, they almost looked like stuffed birds, rather than real.  They were mesmerizing to watch.  Their care taker was in the cage playing with them, and it was interesting to learn a bit about Toucan’s. 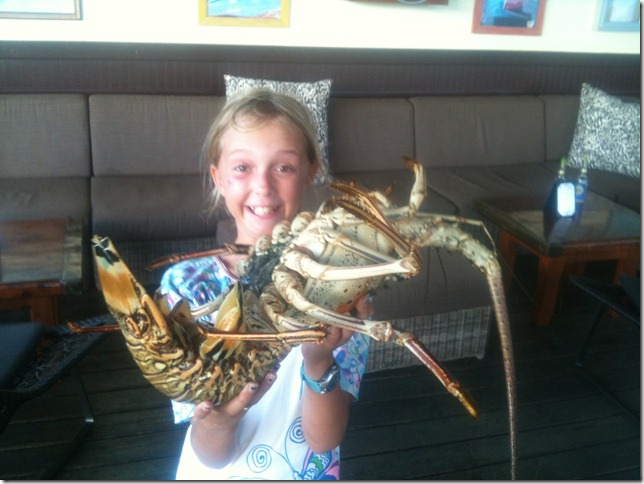 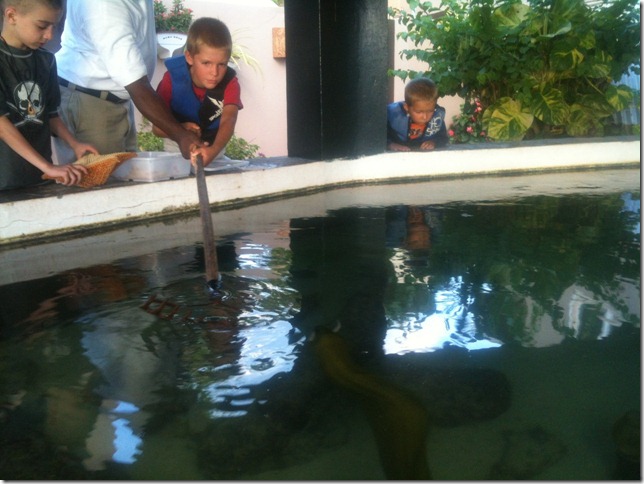 That night Hoodwink joined us on board for Pizza.  The kids had a great time visiting, and it was hard to say goodbye.  They were leaving for St. Martin in the morning.  We still had a few more days of diving left before moving on, maybe we will meet up down the road… 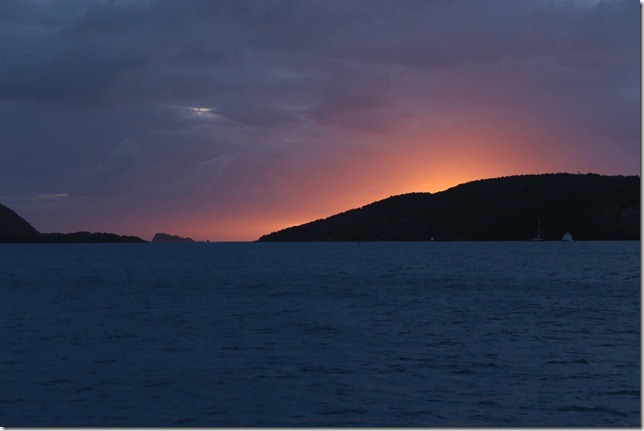 The next day we decided to try another spot in the North Sound, still looking for a calm spot—and better internet, which at the last 2 spots were flaky.  We headed towards Biras Creek, near the super yacht marina, and found calm water in 50ft.  Deep anchoring is always a challenge since we have to put out so much chain.  But we got it out and settled and it turned out to be a great calm spot.  I was worried we would get waked by ferries going in and out of Biras Creek, they run through like twice an hour – but my guess is the mega yacht marina makes them slow down, because they plow full speed till they reach the edge of the marina, so it worked out that by the time they passed us, their wake was nill.  And the internet was way better in that spot too.  David and I enjoyed a date night out to eat at a great spot where we had Roti’s and seafood.  Roti’s are a local dish of curried chicken in a flatbread wrap.  Delish!  After getting back to the boat that night we were treated to a great view of fireworks over the water.  We looked around at the mega yachts anchored near by wondering which one had paid for the great show and what they might be celebrating. 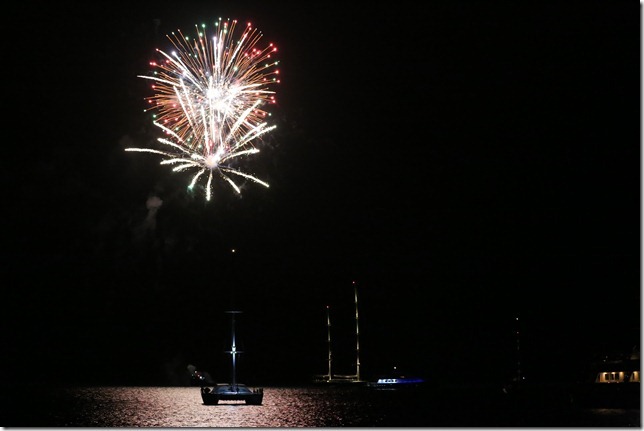 Diving was great.  We had to do a navigation course, a deep water course, and then 3 of our choosing.  We picked peak bouyancy, underwater naturalist, and wreck diving.  The sites we visited were awesome.  So colorful and full of fish and sponges and corals.  We really enjoyed it.  The first two days we went, the dive boat came out to our boat to pick us up – what they call “rendezvous”.  The kids loved having the 30ft dive boat pull along side and watching us jump on and head out for the morning while they worked on school work with Madison. 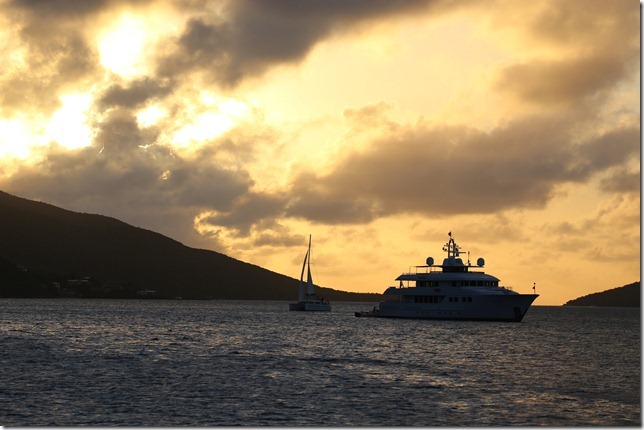