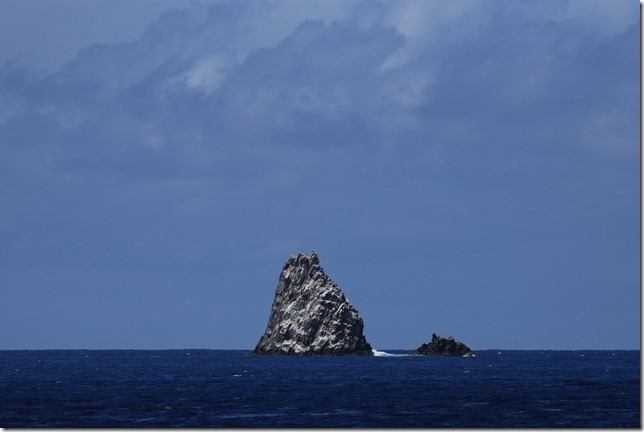 Diamond Rock, off the coast of Saba in the anchorage. It’s turned white from all the birds that visit it.  Has great diving around it.  Just amazing!

Saba (Say-ba) is a very small island.  About 5 square miles.  It is part of the Dutch kingdom.  It is off the beaten path of most boats cruising in the Caribbean for a couple reasons.  It is downwind of St. Martin, which means for sailboats it is a tough beat into the wind to get back to St. Martin or the normally travelled path.  There aren’t many power boats out in the islands, about 80% are sailboats.  The other reason Saba is less visited is a big one – no safe harbor or good anchorage.  The west side of the island is where boats moor or anchor to get out of the trades and swell, but the waves still wrap around the island, so swell makes it way thru the anchorage, which rocks the boat.  If the weather is calm, it is bearable. 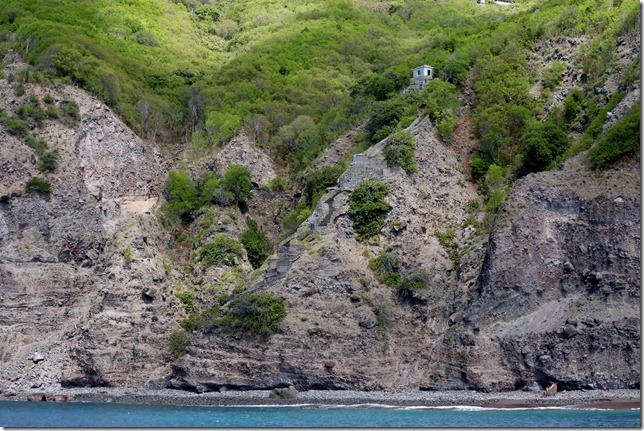 Because there is no safe harbor, it makes getting to shore a bit complicated.  The island is deep water almost to shore, and then the shoreline is rocky and steep.  In the past, everything was carried onto the island, waded in from boats in the shallow water and then carried up 500 steps to the village.  We happened to moor right near these stairs and look at them every morning wondering how they managed to get all their supplies, furniture, and whatever else they had brought overseas up those steps.  At the top of these steps sits the old customs house.

In the last century they have built a small harbor to receive small boats and their once a week barge of supplies.  This harbor is on the south side of the island, 2 miles from the anchorage.  They also have one of the smallest runways in the world for small passenger planes. 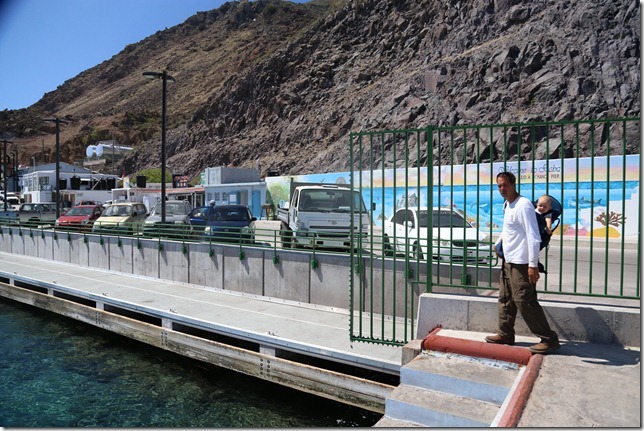 To get to the harbor we would tender the 2 miles south in the anchorage and around the corner, into the waves and to the harbor.  There we found a the harbor master office and customs.  We checked several times for immigration to stamp our passports, but they were never there when we passed by.  Also at the harbor are the dive shops.  Everyone lives up the mountain.  It is just a couple of miles up to “The Bottom” village, and then a few more miles to the busier “Windwardside” village.  We loved exploring this island.  All the homes are white with green shutters and red roofs.  Within the last few decades they passed a law requiring the homes to keep this color scheme.  It really makes for a picturesque island. 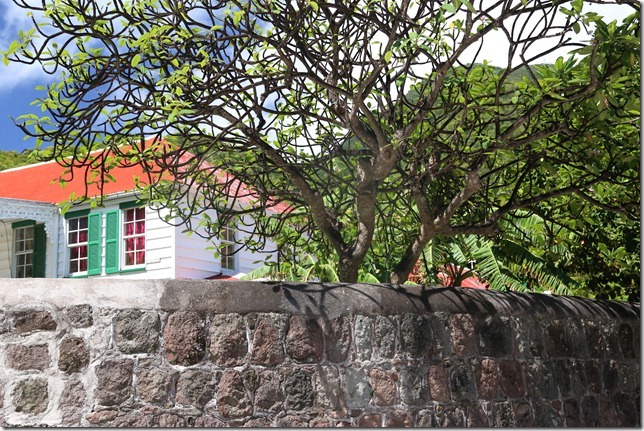 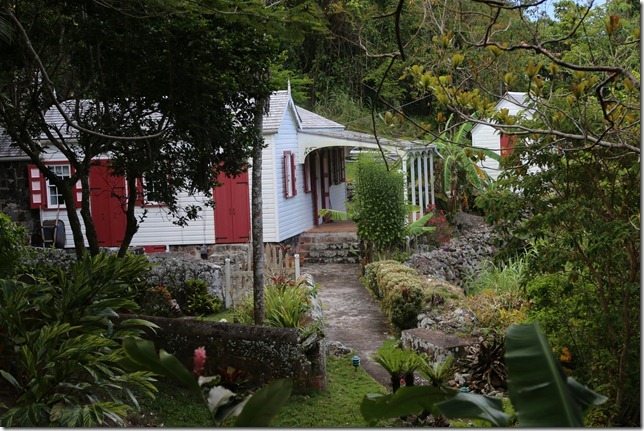 We decided to visit Saba for a few reasons.  One- it is not tourist driven.  So we get to see what real life on a small island is like.  Two- they have incredible diving. Three- great hiking. 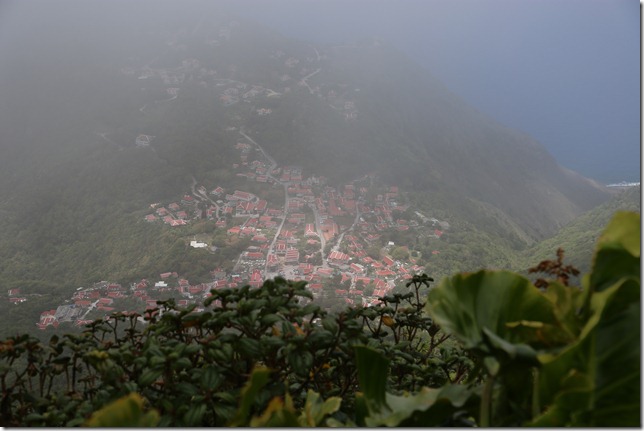 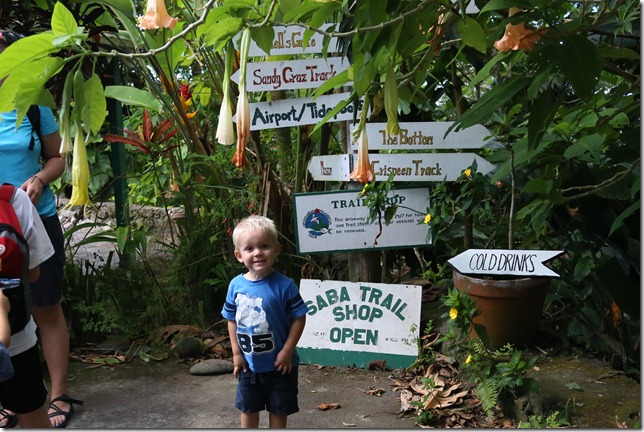 David and I spent 2 days diving, and it was incredible.  Saba was formed by a volcano and the area around it, under the water, about 90feet down, are these pinnacles reaching from the deep bottom of the ocean.  What could have been tops of mountains that never made it above the water.  They are covered in corals and so beautifully colored,.  They are surrounded by great fish life.  We loved diving in Saba, we hope we haven’t ruined ourselves for diving other places as Saba’s dive sites were spectacular. 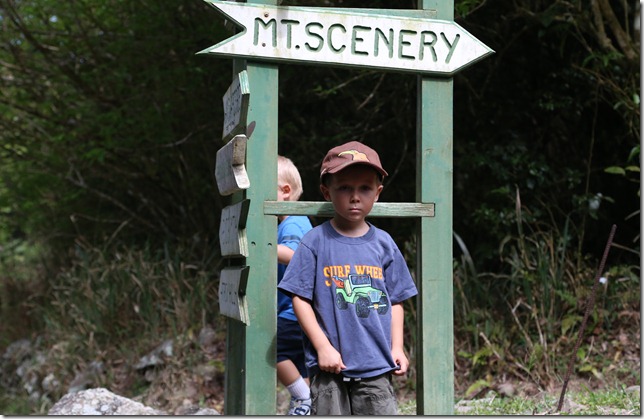 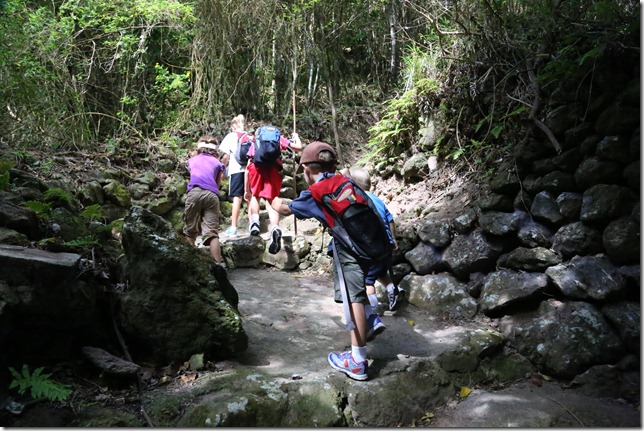 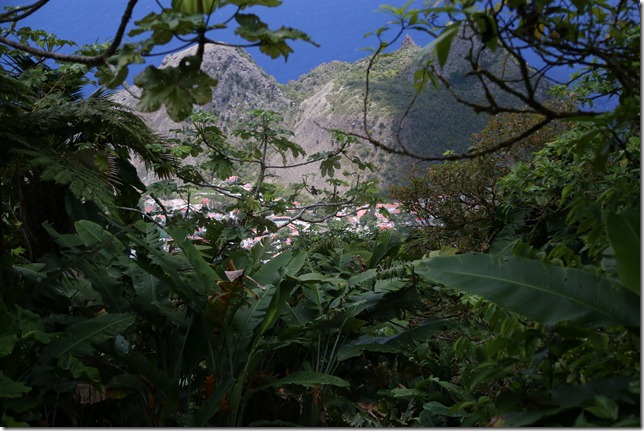 Early one morning we all went hiking.  We hired a local, well known guide to accompany us on our trek up Mt. Scenery, the old volcano that hadn’t erupted in 400 years.  We had heard good things about our guide James, but he spent a lot of time texting on his phone, so our experience with him was less than stellar.  Fortunately it didn’t detract from the beauty of the rainforest that sits on Mt. Scenery. 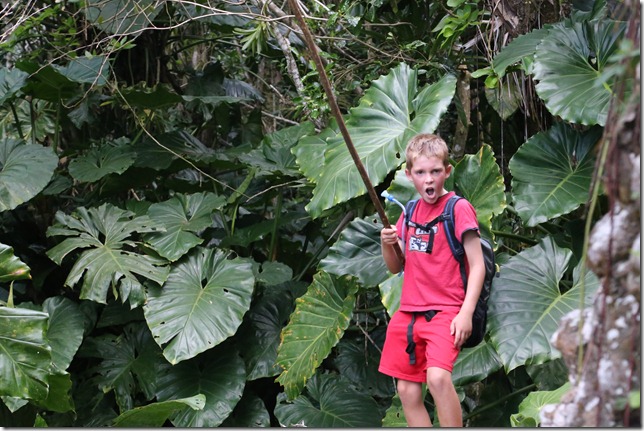 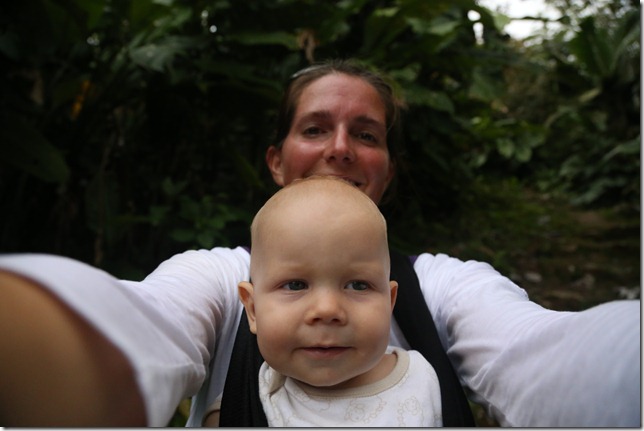 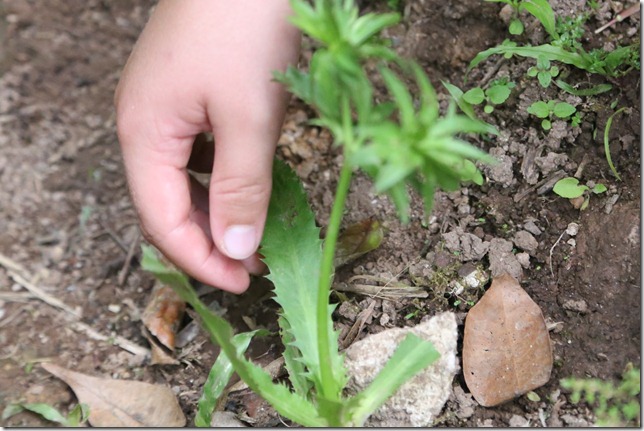 When we could pry James away from his phone, he was full of info about the area, the trees and plants all around us, and we really did learn a lot from him.  He pointed out cilantro growing along the path, and Calvin took to picking it’s leaves when he found it.  He brought a handful home to add to some yummy taco soup later on.  Another local fruit James picked for us was called Dry Apple; it was terrible, but interesting to try.  James cut off palm leaves along the way for the kids.  The higher we went the larger the leaves got and the kids had fun hiding behind them or under them. 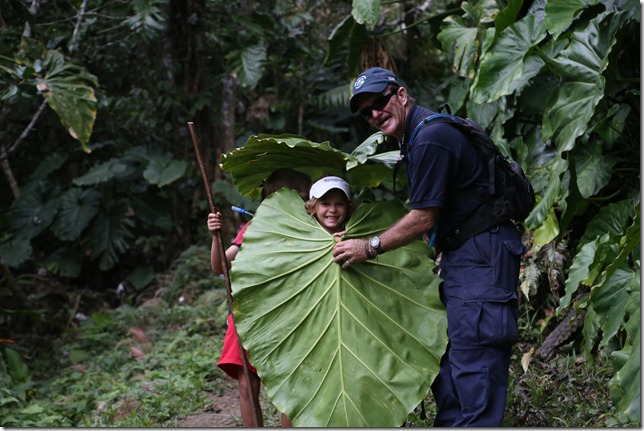 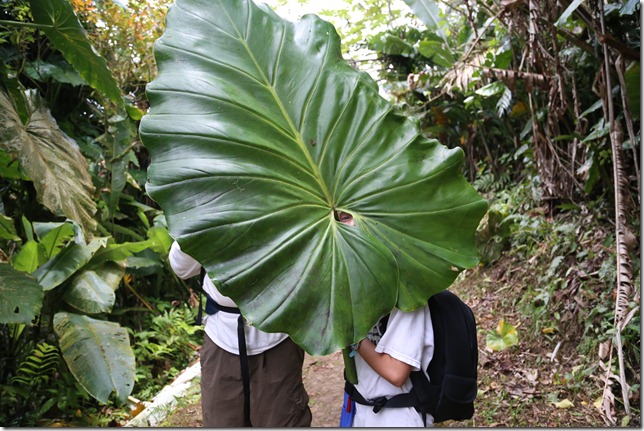 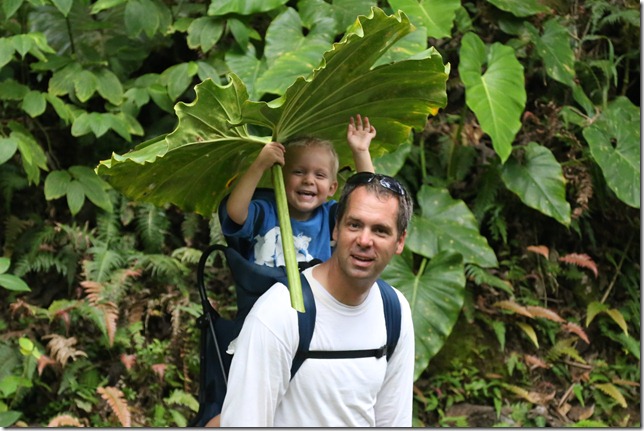 The higher we went, the more mossier and humid it became.  At one point we reached the clouds, and it rained a little on us.  It was so beautiful. 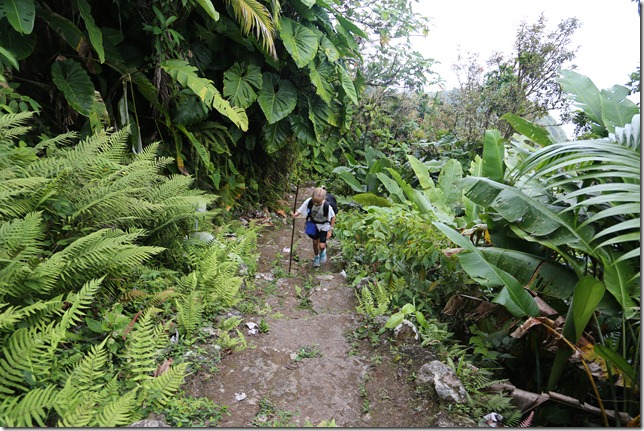 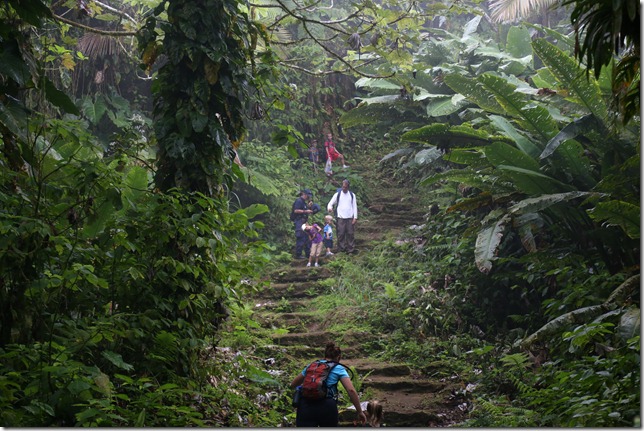 At the top we found a plaque indicating the lookout to be the highest point in the Dutch Kingdom.  When the clouds would part, you could peer down to see Windwardside village and St. John’s below.  We took a break to enjoy the view from the top and to have a quick lunch.  It was over 1000 stair steps up to the top, we need fuel to make it back down. 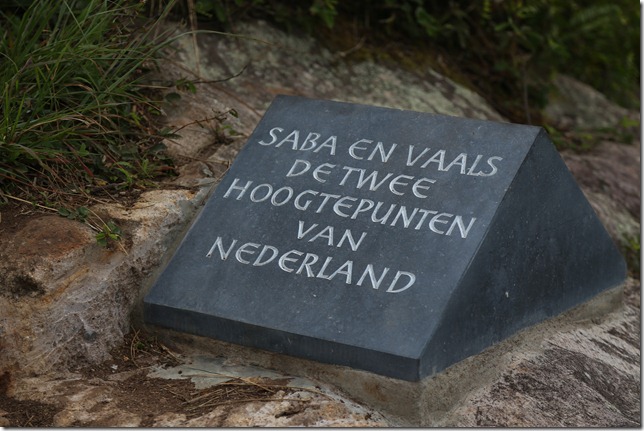 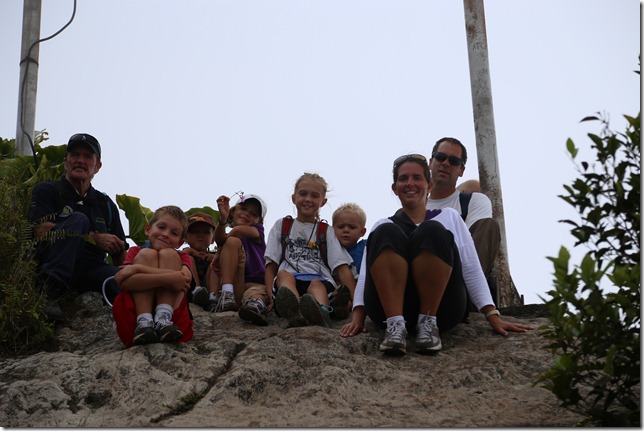 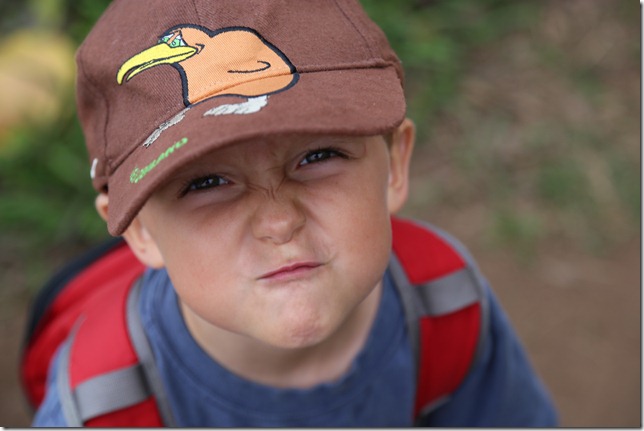 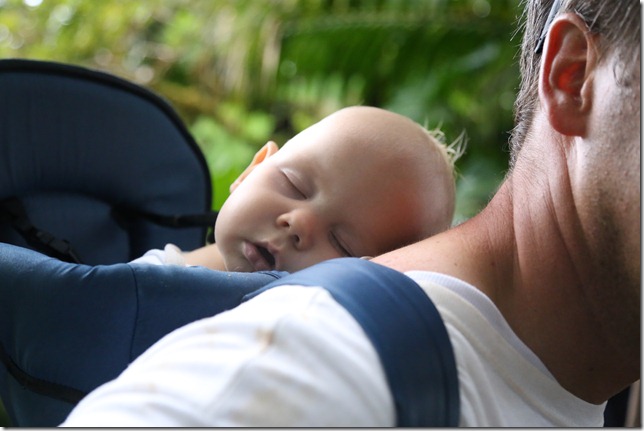 Little Matthew had hiked at least half way to the top.  He took a turn in the back pack carrier for a bit, but mostly he walked.  That kid is a good hiker, slow, but good.  Calvin picked up trash along the trail for a cub scout project.  There wasn’t much to pick up but throughout the hike he was able to fill his bag half full. 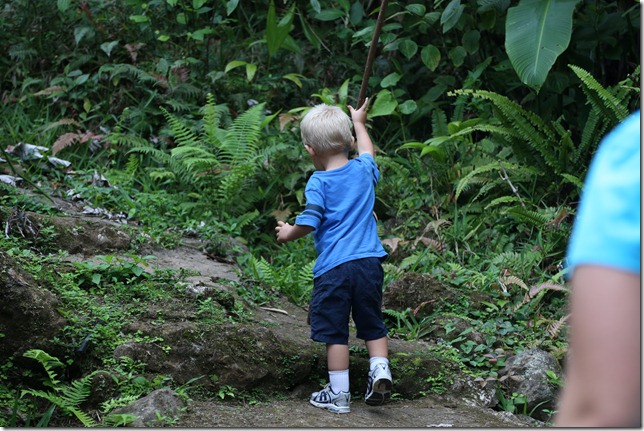 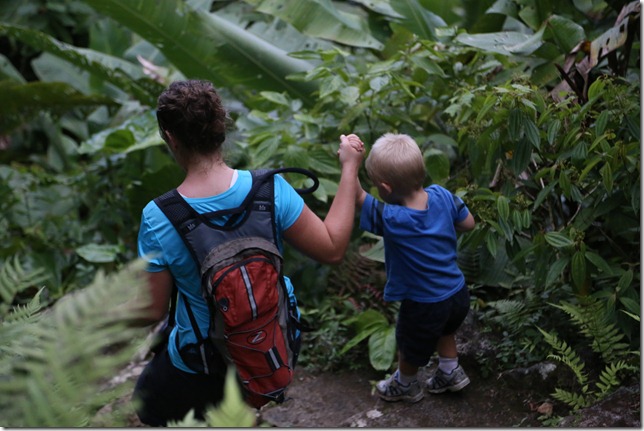 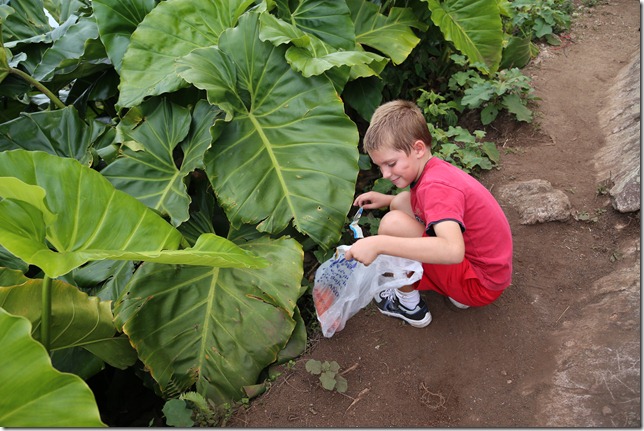 On the way down, we took a different trail that had less steps and took us through a little bit of different scenery.  Near the end we learned the difference between goats and sheep.  It’s easy—Tail up is a goat, Tail down is a sheep.  Our nanny Madison raised sheep growing up, and said she had never thought about it that way, but yeah, that’s one way to tell them apart.  On Saba, they have some sheep that look just like goats and they have sheep, so that’s how they tell them apart. 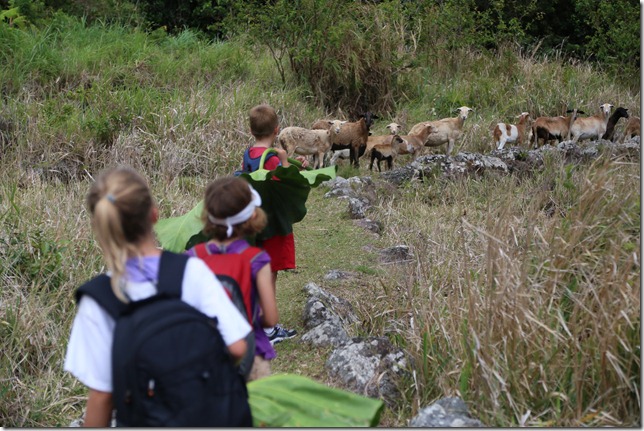 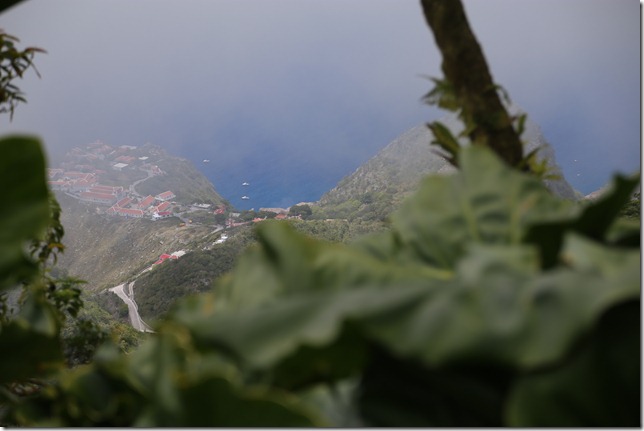