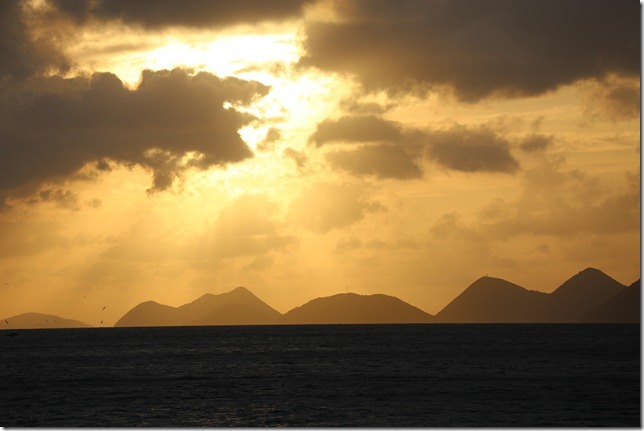 From Anegada we headed to our favorite BVI spot – Great Harbour, Peter Island.  It was crowded when we pulled in late in the day, with all the other boats seeking shelter from the crazy winds too. We struggled to settle ourselves at anchor and kept swinging a little too close to one of the nearby boats. The rule is, who ever anchors last is responsible. So if we swing to close- we have to fix it or move. We had moved once but still the boat kept swinging where we didn’t really want it to. So the decided fix, was to put out a second anchor. It did the trick and kept us in our “swing space”. Time to to settle in for the weekend. A few dolphins were also seeking shelter in the harbor from the winds, and it was fun to watch them play as we sat on the boat.
We were able to attend church on Sunday, but it was a wet ride across the 4 mile channel. We had expected the waves and spray because the wind was still blowing a lot! So we dressed for it. I am sure we looked crazy to all the bathing suit clad boaters, dressed in our foul weather gear. We had heavy rain jackets on with the hoods pulled tight around our faces. The baby sat in his car seat on the floor of the tender covered by a towel tent. We arrived relatively dry. Savannah and I were on the “wet side” of the boat so we had planned for our raincoats to keep our top half dry and then we packed our skirts to change into once we arrived in Roadtown. It was a good plan—our bottom halves were soaked! Thank goodness the winds were blowing, or we would have all melted in our rain gear.
Monday the winds had calmed. David, Benjamin, Isabel and I made another run to Roadtown and hardly got wet this time. We made a last trip for groceries. We have enjoyed shopping at the Riteway in Roadtown. They have great sale prices. We picked up half gallons of milk for $0.99. They were expiring the next day, but that was fine for us, we tossed them in the freezer to be used later. Same with the yogurts and cheese we found on sale too.
We also stopped at customs to clear out of the BVI’s. We were moving on that night. The weather files showed the wind had calmed all day, the waves were dropping and it would hopefully be a good overnight passage to Saba for us.  We were kind of sad to leave the BVI’s, we had been there a month now.  I wasn’t sure when we arrived if I would like it much, with ALL the boats and tourists.  Turns out we loved it there. It is a beautiful place, even with the thousands of charter boats.  But it was time to move on and see more of this beautiful world. 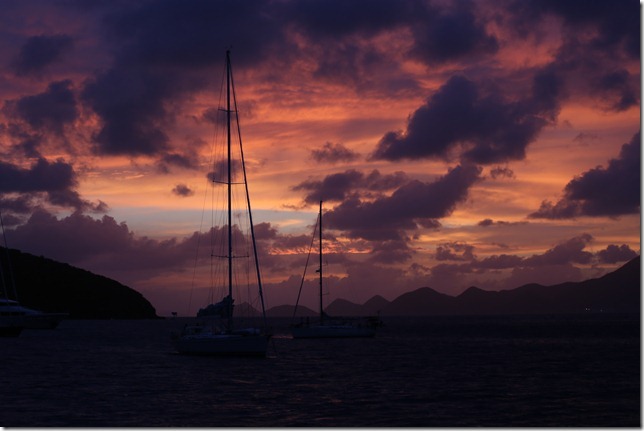