If you read my posts from the Dominican Republic you know that I really wanted to see whales.  They migrate each winter to the Caribbean, mostly to the North East coast of the Dominican Republic.  We left that area about 1 week before the whales were sighted and I was bummed.  We had heard from some friends at the marina that they had spotted whales past Culebra on their recent trip out in the Virgin Islands.  I was hoping we might too, but it had been a couple weeks since their last trip in the area.

We left our calm anchorage in Culebra at 8am Sunday morning.  Our church does not have meetings on Culebra and we couldn’t make it to St. Thomas before meetings began there, so we were left to enjoy the beautiful morning traveling on the water to our next destination.  We had 30 miles to go to reach St John in the USVI’s.  We were curious as to what the waves would be since there was a huge storm north in the atlantic.  The predictions were for 8-9 foot waves.  They would be coming across our beam and since they would be traveling from 1000’s of miles away, they should be nice wide consistent swells.  Sure enough the swells were wide, and a few were really big, but overall it was a nice day on the water.  About halfway between Culebra and St. Thomas, Sean and Benjamin spotted whales out the window.  We all ran upstairs looking for them to reappear.  David spotted them aways off, not sure if it really was whales.  We turned the boat around and headed for where he last spotted them.  I drove so he could take pictures.

Then they appeared!  Whales!  There were only 3 of them swimming together.  2 adults and 1 baby.  We made wide circles around them a few times, watching them surface to breath, hoping one would breach the water with a big jump.  After several passes around them it was time to continue on our way—just as we all looked back for one last look, one of the whales made a huge jump out of the water, leaving us with no doubt just how huge and beautiful they are.  It was amazing.  We circled around one more time, hoping for another show…  but that was the only one we got.  We didn’t even get a picture it was so unexpected.  It was awesome, a memory we will treasure. 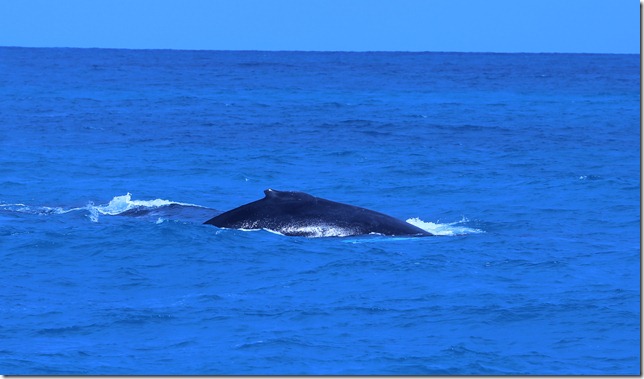