Poor Benjamin broke his collar bone.  He fell out of bed in the middle of the night.  Usually he sleeps in a top bunk bed with a lee cloth that holds him in and keeps him from falling, but we had family visiting so he and Matthew were sharing the bottom bunk where Matthew sleeps.  It’s only a 2 foot fall, but that was enough to land wrong and break the bone.

In the morning we made a call to the clinic on St. Thomas, but after talking with some other boaters who spend way more time in the USVI then us, we called the clinic back to ask if they could do xrays.  They said no, but that after the DR sees him, they would refer us to the lab in Charlotte Amalie for xrays.  Once we talked with the Dr., she explained that after the xray we could walk over to the orthopedic office to get a sling.  A few hours and a tour of St. Thomas later, we arrived at the orthopedic office and realized that this is where we should have come first.  Next time some one breaks a bone we will look up orthopedics rather than a local clinic.  We spent extra money on going to the clinic first.  Lesson learned. 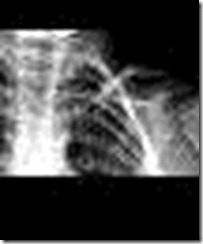 We arrived back at the boat late afternoon to find our visitors, Michael, Janae, and Sydney, and the rest of our kids had returned from a few hours at the beach.  Everyone admired Benjamin’s new sling.  We even looked at his xray and broken bone on the computer.

None of our other kids have broken a bone, Benjamin is the first.  Matthew had stitches last year, twice.  Having a broken collar bone hasn’t slowed Benjamin down too much.  He still managed a day at a beautiful sandy beach.  The hardest part has been getting his shirts on and off.  So we decided to put a clean shirt on each night, rather than a PJ top and then he could wear the clean shirt till the next night.  After spending time cleaning him up from all the sand, we decided he could take a day or 2 off from the next excursions and enjoy special time on board playing games.  He missed out on a great adventure exploring rocks and caverns at the Baths, but luckily he had fun just staying on the boat. 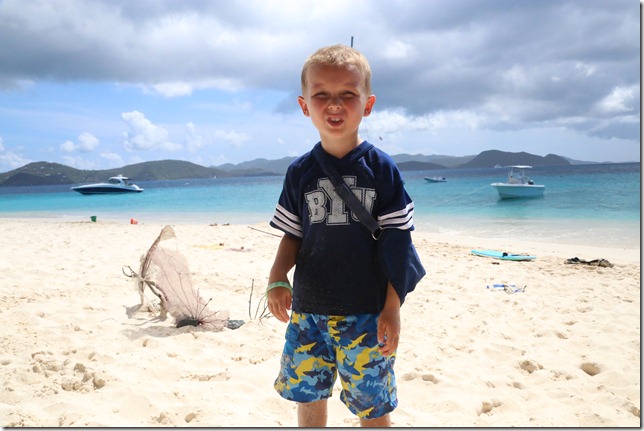 He’s healing well, until Matthew shoves him in his shoulder, or he trips and falls.  But after a quick cry of pain, he is up and running again.