Our trip thru the Florida Keys

Unfortunately there is not much to tell.  No exciting run ins with sharks, no awesome snorkeling.  The weather has been windy and often overcast and rainy.  It’s not cold, so the temperature is quite pleasant.  But the water temp is 74 degrees, and without the sun shinning bright, no one wants to get in the water.  Along with the water being choppy and wavy, we haven’t wanted to take the kids snorkeling out in the reef.  The water is clear and sparkling turquoise blue and looks very inviting.

On Day 1 we travelled a few hours from Hollywood, FL, to No Name Harbor on Key Biscayne. Of course we saw dolphins along the way.  This key has a great view of the Miami Skyline.  We went ashore and hiked around the state park, We stopped at the playground and the kids had a great time playing.  Then back to the boat for dinner.

On day 2 we stopped and anchored off of Elliot Key in Biscayne National Park.  We took the Dinghy over to Elliott Key and hiked a short trail.  Then we headed back to the boat for lunch.  We wanted to take the kids to the NP visitors center so they could collect their 3rd junior ranger badge for South Florida at which time they would have also earned a patch.  But with winds out of the east, there was no where decent for us to anchor near the visitors center.  Where we were at Elliott Key was fairly calm, but 6 miles across the choppy Bay to the visitors center.  We decided to leave Matthew with Suzie on the boat to take a nap, and to lighten the Dinghy.  The rest of us loaded up and zipped off in the choppy water to the visitors center.  The kids collected their junior ranger badge and water patch.  We walked through their displays and watched a short film about the park. That just made us wish even more for nicer weather to take a snorkel trip.  Oh well, I guess the next time we come through here. 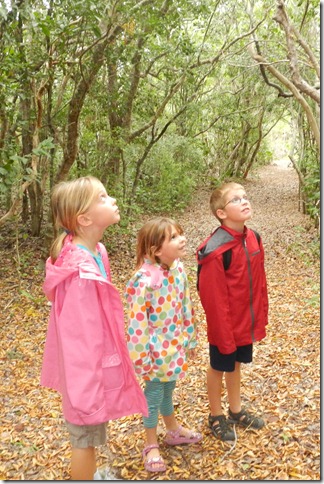 We headed out that evening to anchor just a few miles south.  We wanted to be close to the cut out to the Ocean side channel so we could leave early in the morning during high tide.  Staying on the north/ gulf side of the keys is a bit shallow in many parts for our 6ft draft, so the best way is on the south side, or Atlantic side.  Luckily the Reef is 4 miles off shore and protects the channel we would be traveling in from too many waves.  It was still a bit wavy, and with east winds, they were hitting our boat broad side which makes us rock a little more, despite our stabilizers. The boys get a little sensitive to the rolling motion.  The kids all had dramamine, but Calvin still tossed his breakfast up. I settled all the kids down to watch a movie and they seemed to do okay.  We only spent about 3 hours traveling that day before we reached the Channel 5 bridge and inlet.  We found a nice spot to anchor on the gulf side protecting us from wind and waves off of Lower Matecumbe Key.

Nearby, Lingnumvitae Key is a Botanical State Park.  They only offer tours of the park 3 days a week, 2 times each day, and the Park can only be reached by boat. If you don’t come during those times they won’t let you on the island, guided tours only.  After discovering this we quickly jumped in the dinghy and headed over to the island.  I didn’t check the water depths too closely on our way and half way there we found ourselves in some shallow waters over a protected grass area.  David had to jump out and push us till we could reach a 2ft depth and could slowly motor ourselves to deeper water.  We made it to the Park, 5 minutes late, but were still able to join the guided tour and see some of the pretty trees and trails of this park.  We learned more about the “protected grass” area we had made the mistake of going thru.  If they catch you bottoming out and destroying the grass, they can fine you for the damage. We did the right thing by turning off our motor and having David jump in the water to pull us to a deeper section to minimize the damage to the grass.  Needless to say, we checked our route and took a longer, deeper path back to the boat. 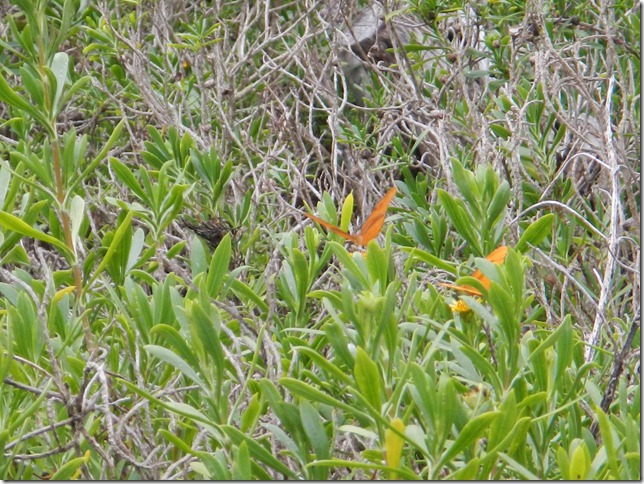 The next day, late in the morning, we headed out again towards Marathon city on Boot Key.  We were hoping to pick up a mooring ball here, but they were full, and so was the anchorage in the harbor.  We ended up anchoring down a small creek.  It was quite pretty, except for the biting no-see-ums, and the nearby radio towers.  These towers put out quite a strong signal, trying to reach to Cuba, over their blocked signals, to share our American views with them.  Unfortunately the towers caused some problems with some of our electrical equipment which frustrated David.  We also had been having problems with one of our generators and needed a part.  Marathon is a fairly large city for the keys and especially for boaters, so they had the parts we needed. David made the 3 mile bike ride to the store to get his part.  His part worked, the spare parts we had on the boat didn’t.  And those parts we couldn’t find nearby. 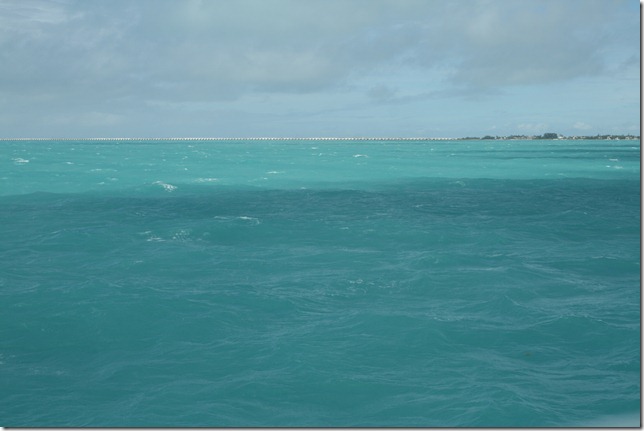 We ended up spending 2 nights anchored here.  We met another boat that is also headed to Mexico.  They are planning on leaving the next day ahead of a low pressure system that is coming over the Gulf.  We talked about going with them, but I wasn’t too sure about the timeline and the wave predictions.  We headed out of Marathon and towards Key West contemplating what we should do and when we should make the jump.  I had planned on stopping in Key West, and of course the Dry Tortugas for snorkeling and exploring.  If we went with Valkyrie to Mexico during this weather window we would miss both of those, of course the weather still wasn’t good for snorkeling and wouldn’t be for several days.  We could always stop on our way home in a few months.

Later that day we stopped not far south from Marathon, at the picturesque Bahia Honda State Park.  It was overcast, but a pleasant day.  David took Savannah out on the inflatable sail boat for awhile.  I attempted to lower the dinghy by myself to take the kids to the beach.  David came back in time to help me figure it out.  We headed to the beach for an hour or so.  The kids played with a group of other kids staying nearby for vacation.  They had a great time digging in the sand and water with their new friends.  We saw campers on this key, and if I were going to camp in the keys, this would be the place.  Beautiful beaches, water is gorgeous, sandy and clear for swimming and snorkeling around.  The reef is not far away for real snorkeling or diving.  Definitely a great spot. 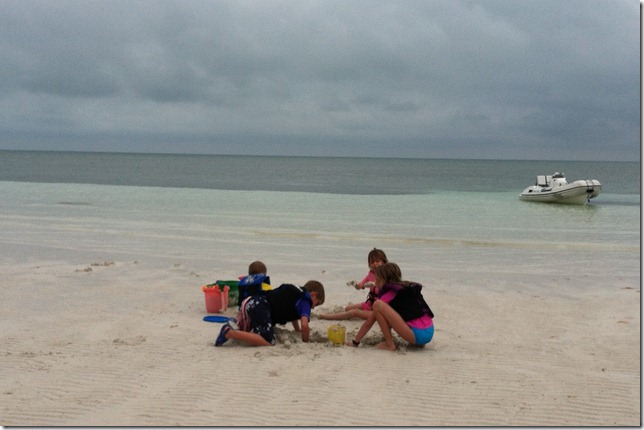 When we first anchored early afternoon, it was fairly calm and we were protected from the waves by the key, but the winds shifted to the east more than called for and late in the evening we started rolling.  It made for a long night.  The kids slept just fine, but David and I definitely noticed the rolling all night. I was ready to go in the morning, but David wanted to figure out his electronics/generator issues so we could decide if we should head all the way to key west and plan to cross to Mexico in the next day or so, or if we should make another anchor stop in between and wait for another weather window.  The kids and I, just want to leave the rolling anchor spot behind.  After an hour and a half, I convinced him to pull up the anchor and head out.  I would drive while he sorted through his problems to solve.