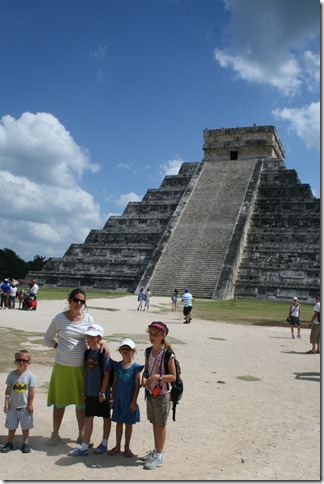 What are they?  Mayan Ruins.  Chichen Itza is the most well known Mayan Ruin site, being one of the new 7 wonders of the world, and a world heritage site.  It was quite a large city and has had a great amount of excavation and preservation done.  It is the most visited ruin site in the Yucatan Peninsula and its temple is well known.  David and I, as well as my brother Rob,who was with us on this trip with his new wife, have visited these sites in the past.  It was fun to share them with the kids and my new sister in law Heidi.

They do not allow visitors to climb the temple at Chichen Itza anymore or any of the ruins in the city.  But they are neat to look at and have quite a bit of engravings on the buildings compared to the 2 other ruins we visited.  The city was established and built between 800-900 AD.  We were not planning to hire a guide, but self tour the site.  David changed his mind and hired a guide after we entered the city for our private group.  We spent more than 2 hours with him and paid him $50 USD.  He spoke very good English and knew a lot about the city and the Mayan and Toltec people who lived there.  It was fun learning new things and having most of our 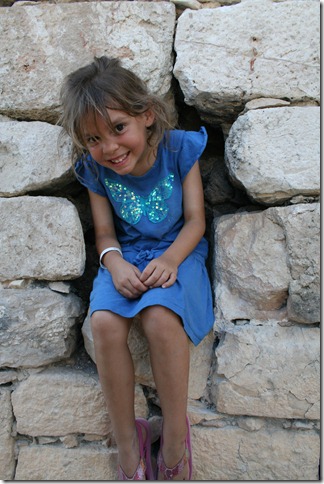 questions answered.  We learned that the area open to the public for viewing is the ceremonial center of the city and would have had no trees during the time it was used.  They would have kept it cleared of trees for easier access to each building.  It is very hot there, I can not imagine walking across the city without a little shade.

Because Chichen Itza is such a big tourist site, the city paths are strewn with street vendors all selling the same souvenirs.  The kids had fun looking at everything and asking about prices.  It was fun to walk away and say too much and have the vendor lower the price as we walked away.  In the end Calvin was the only one who really wanted something, a jaguar whistle.  He did not have enough money to buy it and none of the vendors would sell it for the amount he had.  So he had to leave without it.

It was a 2.5 hour drive to Chichen Itza, so we knew we had a long drive home.  We stopped just outside the city for a quick dinner at a little Mexican buffet.  Calvin loved it and asks to go back there.  They had 4-5 different options at the buffet, and oddly, Jello for dessert. 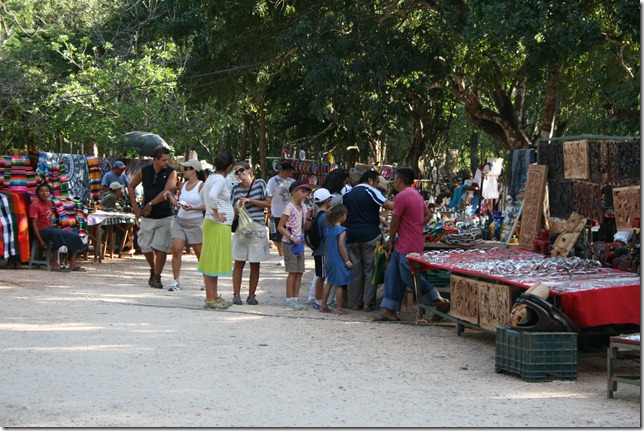 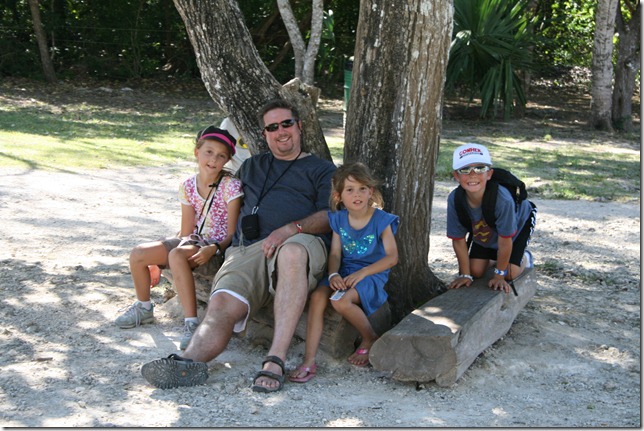 When we returned to the boat it was straight to bed for the kids.  Savannah said her tummy was hurting her, but we sent her to sleep.  Just a couple hours later she was up throwing up.  We had her sleep in the extra room near us, which was good because she got up another 6 times during the night to completely empty her stomach of everything in it.  The next day she had a low fever and was tired.  We wondered if it was the food or the flu.  We all ate the same food and no one else was sick. 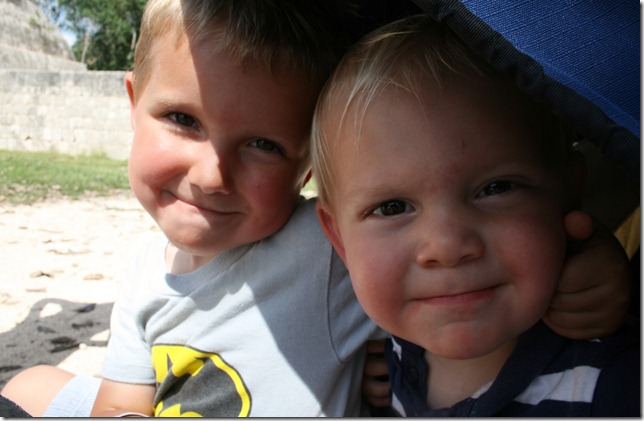 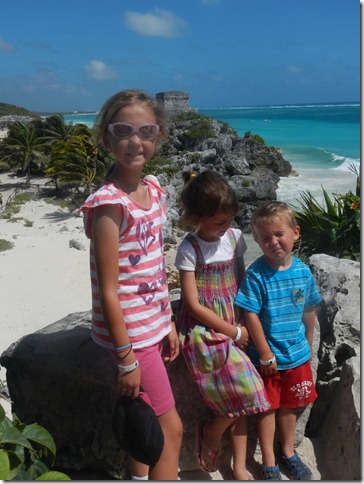 The next day we snorkeled nearby so she could stay on the boat and rest. The day after we headed south to Tulum.  The ruins on the seashore.  The temple of Tulum is built on a cliff overlooking the Ocean with a beautiful rocky beach below.  It is quite scenic.  The ruins site is not as large as Chichen Itza, but was a large shipping city in its time.

It has most of its city wall intact with entrance and exit to walk thru.  The kids had a great time there trying to feed a lizard crackers. 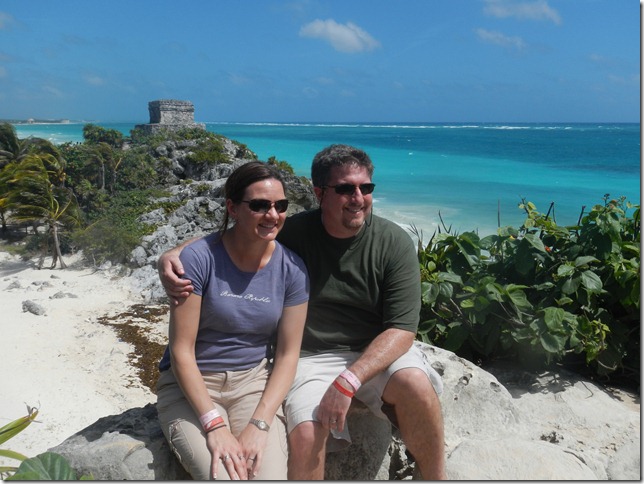 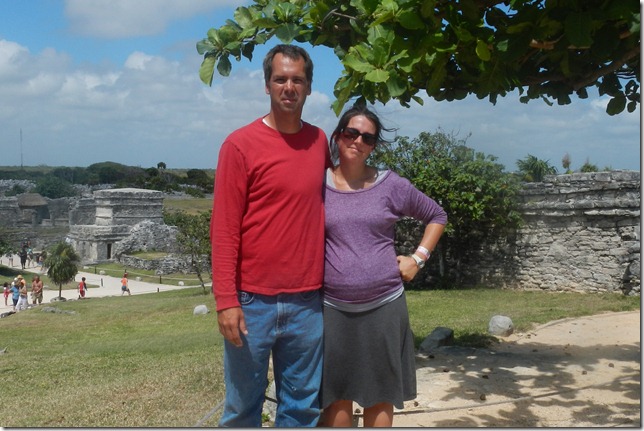 We spent the morning at Tulum.  Afterwards we were all hot and sweaty and hoping to snorkel in a nearby cenote or at a beach, but David wanted to head 30 miles inland to Coba, since we were nearby. 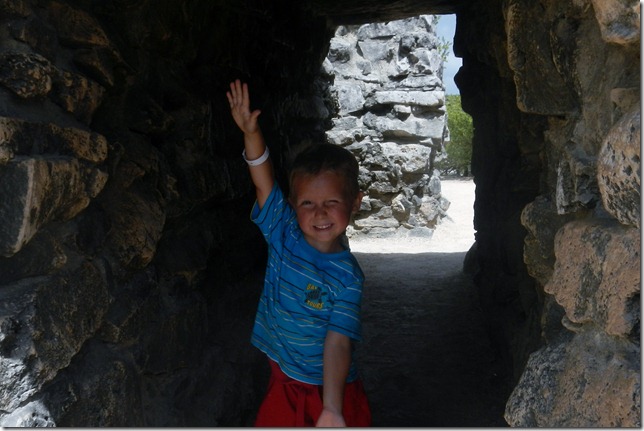 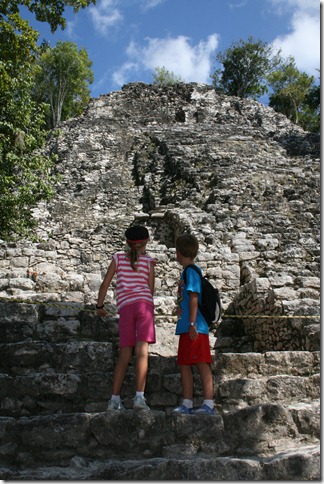 Coba is a neat site.  It has a taller temple than Chichen Itza AND they let you climb it. The temple is over 130 feet tall. The site is not nearly as restored, but money for that cause is hard to come by in Mexico.  Coba does not have as many buildings, but land wise, it is bigger than Chichen Itza.  It is also more in the jungle at the present time, so it has a different atmosphere which I like.  The building and stair ways have tunnels running under and through them that you can still walk thru. 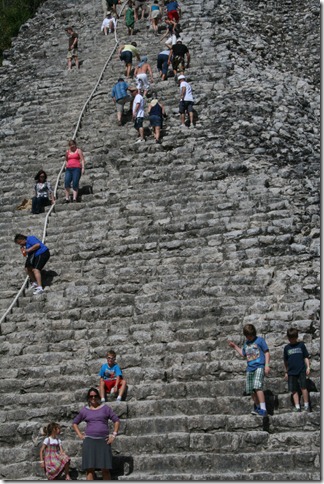 We walked over a mile to the big temple site and then started the climb up. Calvin counted 116 steps on his way up.  He wanted to count them again on the way down and came up with 123.  Hmmm…

He must have taken a different route down then up.  We noticed that at Coba the rocks used to build were not cut as uniformly as at Chichen Itza.  This may account for Calvin’s difference.  Some steps were big, and others had half steps in between. 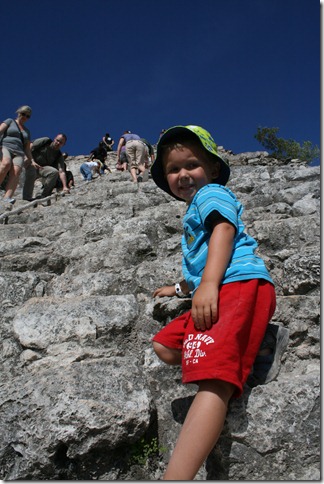 There was a nice breeze up at the top which cooled us off before we started back down.  No one tumbled, we all made it safely down.  Matthew of course stayed at the bottom with Suzie taking his afternoon siesta, but the rest of us all made the climb, including Benjamin. 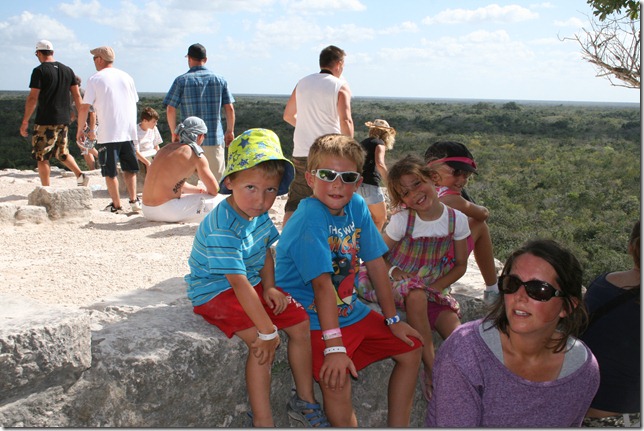 Well to follow our theme of visiting Ruins, and then getting sick.  That night David and I did not get much sleep.  Isabel was the first to start in around 1am, throwing up.  Near 4 am poor little Matthew threw up all over his bed.  And then around 5am Calvin came down and said he had thrown up too.  For a few hours he and Isabel had to take turns tossing their bellies in the bathroom.  Poor kids.  It was a long night.  Now we’re sure, it was the flu, it found us—even in Mexico.  We are still waiting for Benjamin to take his turn.