We docked at Paraiso Marina on Isla Mujeres and were welcomed by a few of the boats around us.  They are seasoned boat travelers that live on their boats fulltime and have spent the last few years here in Isla Mujeres and visiting places nearby, such as Cuba and Guatemala.  It was nice to visit with our fellow boater with a wealth of knowledge and learn from them.  Docking here for the week was equal in price to the 2 nights we spent at La Amada in Puerto Juarez.  Paraiso is not the nicest marina we have stayed at, in fact we wonder if the pilings will truly hold us in strong winds, but the neighbors and staff here are nice and helpful, and it is a great location.  We are docked across the small bay from the popular snorkeling areas which makes it easy to make a quick run on the dinghy over for an hour of snorkeling. 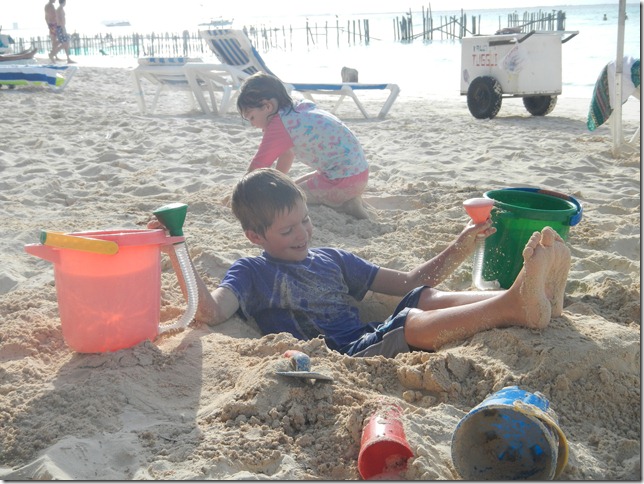 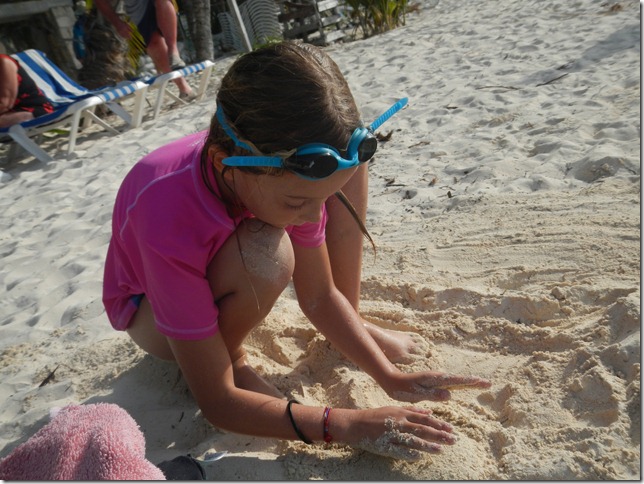 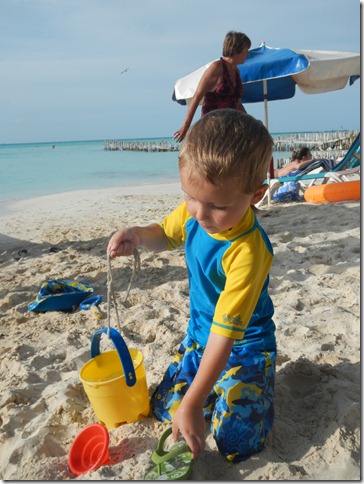 Our second day here after school work was finished we unloaded the bikes and trailers.  Suzie and I, and the 4 older kids headed off for the 1.5 mile bike ride to the beach.  David stayed behind to work on a few boat projects while Matthew napped.  We had a nice time enjoying the clear water and beautiful sandy beach.

The next afternoon we headed out for some snorkeling.  Savannah, Calvin, Isabel and I jumped in the water—cool and nice temperature, and headed off to snorkel.  David and Benjamin were going to follow with Benjamin on our snorkel window raft.  But after a few minutes in the water, David made the wise decision to turn back to the dinghy as the current was quite strong and the further we drifted from the dinghy the harder it would be to get back.  So he headed back to wait for us and then drove the dinghy to us to pick us up.  We tried to head back as far as we could and used a rope line set up for snorkelers to help with this, but when the rope ended it was tough to swim up current.  A good work out especially since Isabel was hanging on to me. 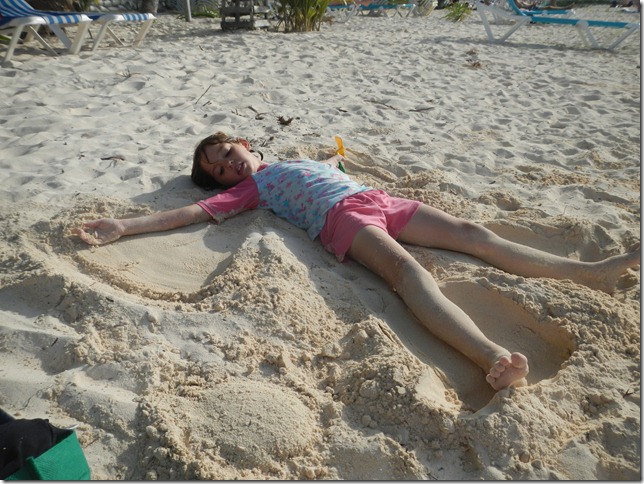 Savannah and Calvin swim and snorkel really well.  I just keep them in front of me and they stay together.  I just have to look for their fins up ahead to check on them. The water is so clear it is easy to see if they need me at all.

That night after dinner we all loaded in the bikes to head to the downtown area to walk thru all the shops and small streets.  The kids loved looking at all the souvenirs.  The girls really want to get a Mexican dress to wear to Church. 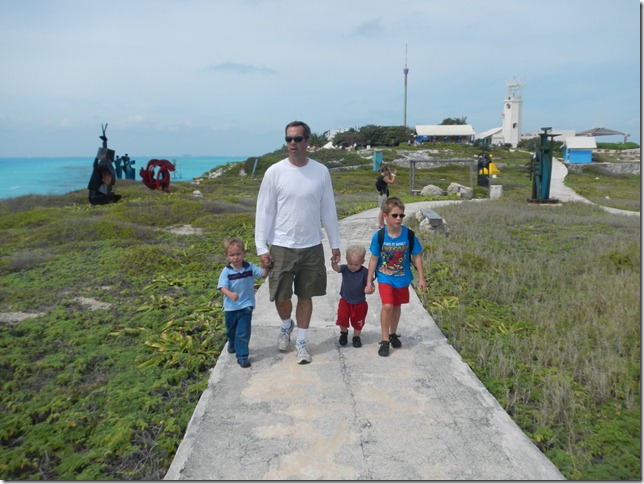 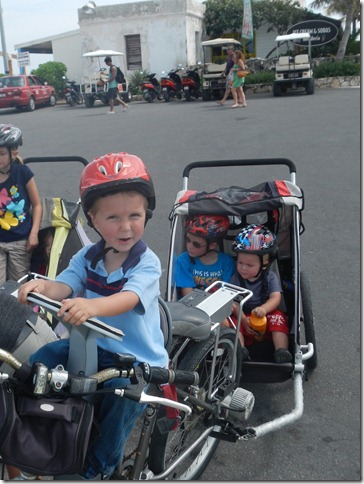 On our 4th day here David and I went out to breakfast.  I read about this little café on trip advisor called Mangos.  We rode the bikes.  Breakfast was delicious.  I had coconut french toast, yum, and David had their unique twist on eggs benedict-really good too.  I also had a tamarind juice.  It was all so good, I want to go back.  When we visited Cancun a few years ago we stayed at an all inclusive resort  which we loved.  I loved the nice restaurant for dinner every night and not having to worry about budgeting for food or going out from the resort every night, but now I feel like we missed out on a great opportunity to try some delicious culture.  Well, we are making sure to get that in now.  At the grocery store here in Isla Mujeres I brought back a fruit that I have yet to figure out what it is, but it is really yummy.  We also picked up some Mango yogurt, fresh made tortillas, and a few other things more Yucatan style. 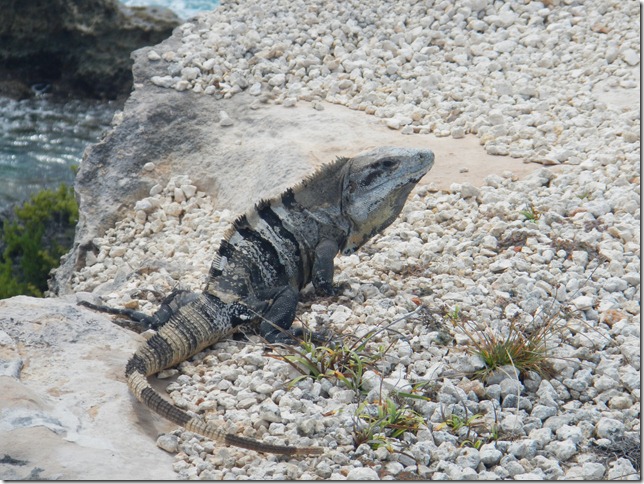 Later that morning we wrapped up school early for an island excursion.  We loaded in the bikes and headed 3 miles to the south end of the island.  This is the most eastern tip of Mexico.  There is the remains of a Mayan temple built on a cliff.  In the last few decades a sculpture garden was planted here and some hiking trails winding down to the water were made.  We had a nice morning exploring this area. 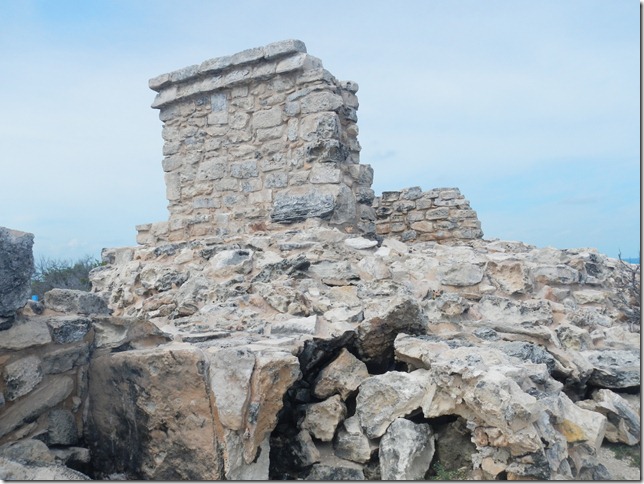 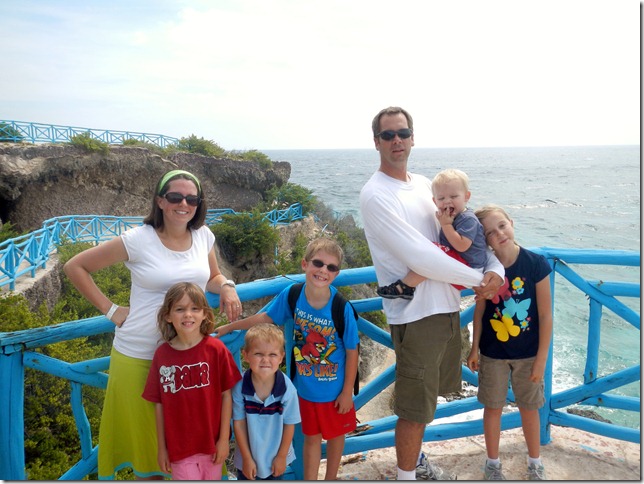 We then headed back to the west side of the island to a beach grill for a local fish grilled in a Mayan sauce and some nachos.  After lunch we headed just up the road to the turtle research center.  Here they help hurt or deformed turtles and some other varieties of sea life. They had tanks with sea horses, even little teeny tiny ones, lobsters, and octopus. 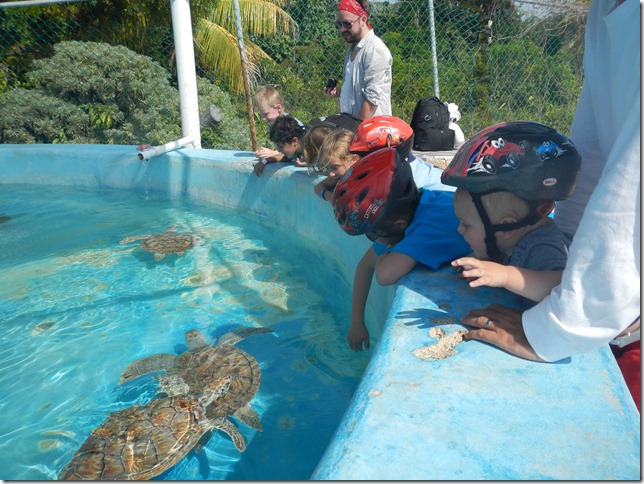 The kids had a great time watching the turtles and they even had a little touch tank where an employee helped the kids hold sea urchins, a tiny manaray, and a sea cucumber—which Calvin said looked like a poop.  It was well worth the $15 for our group to visit. 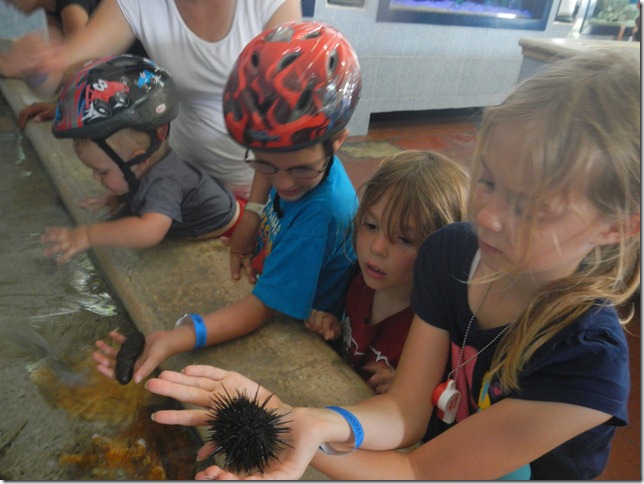 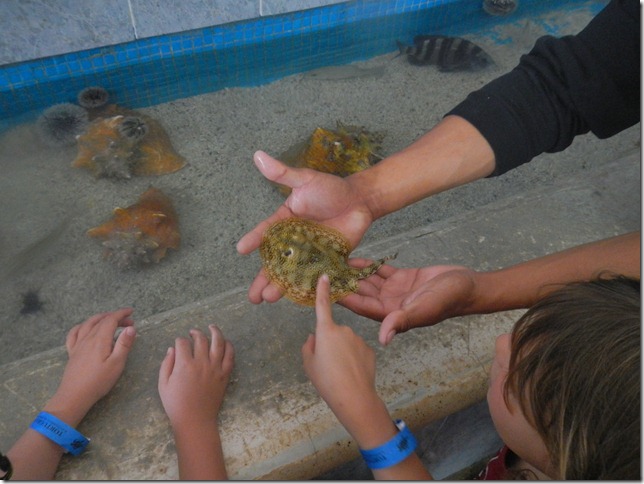 We were hot when we returned from our bike ride and after putting Matthew and Benjamin down for a short nap, David and I took the 3 other kids out for another quick snorkel trip.  It is fun being  300 yards from a quick snorkel. 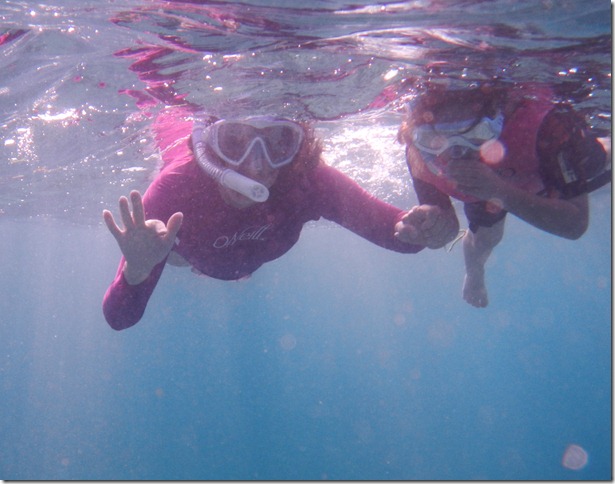 We went out to a spot we hadn’t snorkeled by yet, and then to an underwater arch, and then back to a sunk ship in very shallow water that some of the kids had snorkeled at the other day.  Savannah saw a little manaray, and several starfish in the water and there were lots of fish to see at all 3 places. 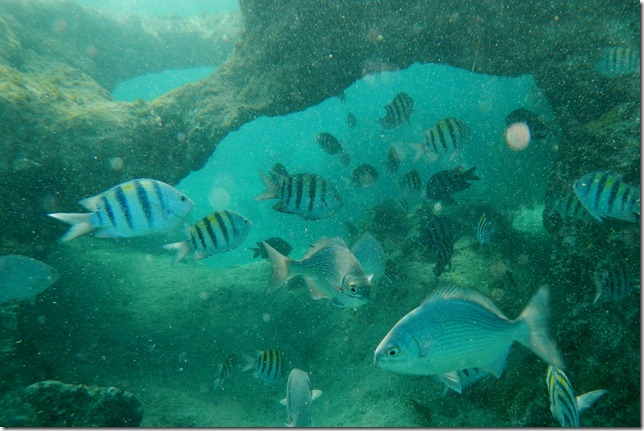 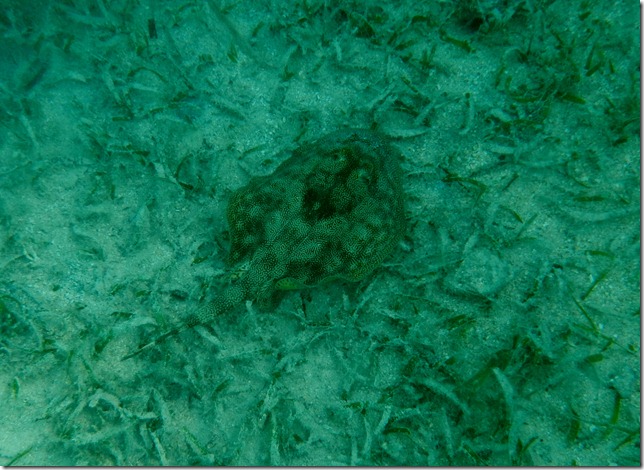 The next afternoon we loaded up the 4 older kids and headed back to the north beach.  This time David came and drove us in the dinghy.  Suzie stayed with Matthew for a nap.  We anchored the dinghy about 100 yards from shore in 3 feet of water. 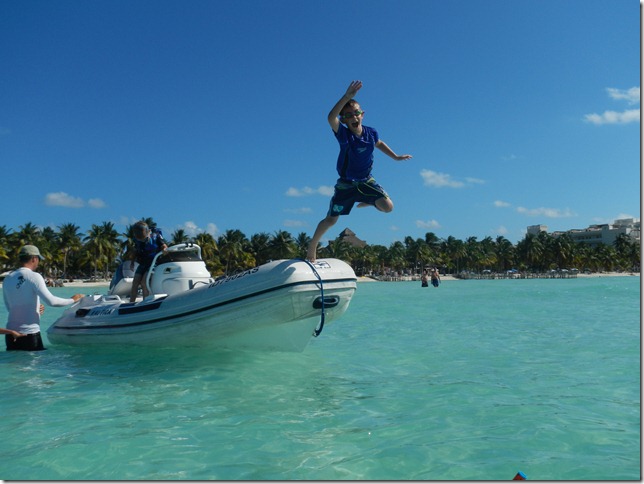 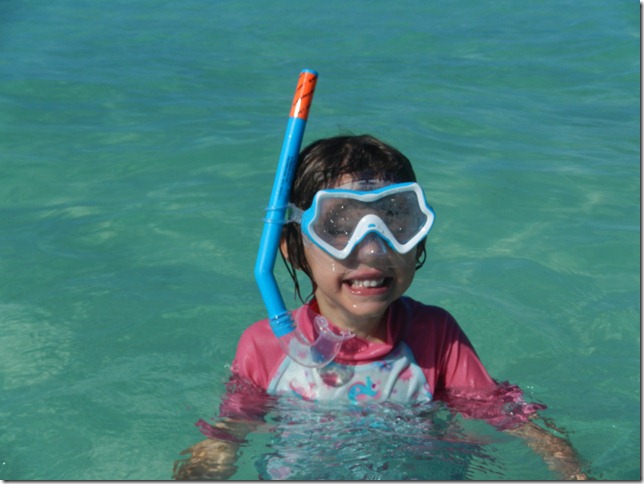 This beach is so pretty with lots of shallow water in sand.  The kids had fun jumping off the dinghy and swimming in the water.  After a bit they wanted to head to shore to dig in the sand.  So I grabbed the beach blanket and a book and to shore we walked in the shallow water.  David and I sat reading while the kids played. 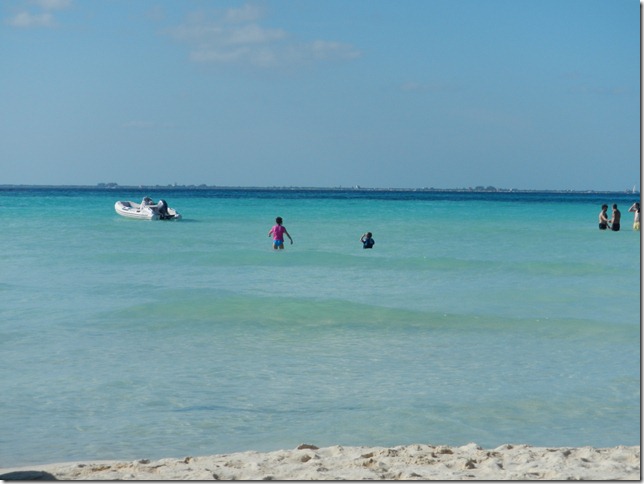 At one point Benjamin asked if someone would go to the dinghy with him so he could swim.  We weren’t quite sure what he was after exactly, after all we were at a beach, swimming could be done easily, no need to go all the way out to the dinghy.  We said he could ask Savannah to take him out there.  So he and Savannah headed out to the dinghy.  I had a suspicion he wanted to jump off the dinghy.  He had done it once earlier and was apprehensive about it, but apparently he was over that, and wanted to jump and swim.  So we watched him and Savannah jumping off the dinghy and having fun.  Eventually they made their way back to shore and the kids had fun playing in the sand and water for a little longer till it was time to go.  It was a great afternoon. 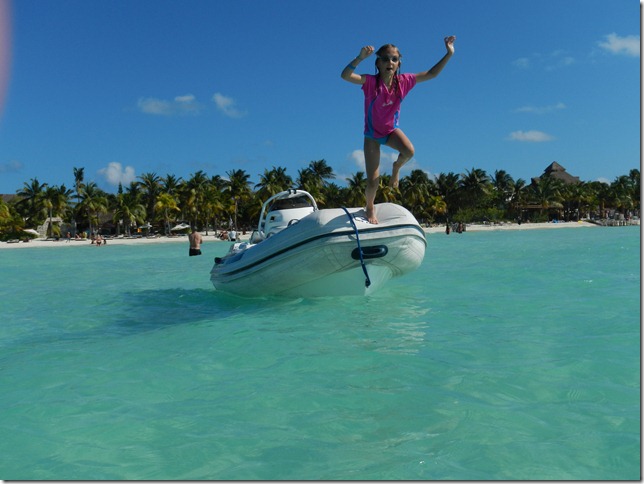