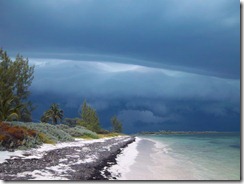 In the morning we headed for Moraine Cay, not to far away.  We arrived around lunch time and had lunch on the boat.  Then we headed to the beach.  Moraine Cay is small and privately owned with a house and 2 little beach cottages.  The guidebook said that the reef just off Moraine Cay was pristine and 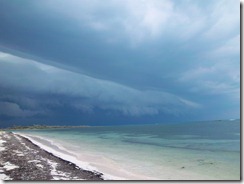 beautiful for snorkeling—the reason I picked to go there.  We all went to the beach—even though it is a privately owned Cay, all beaches in the Bahamas are public.  You have to stay on the beach and can not wander past.  We walked up and down the beach and then headed back to the dinghy to discuss who would go snorkeling first.  Calvin, Isabel, Rob and I headed out in the Dinghy to the reef, not far from the beach.  David drove us and was going to wait in the Dinghy while we snorkeled.  It took us a few minutes to find the coral heads then rob hopped in.  I got Calvin and Isabel ready and then we hopped in.  Isabel swam over to Rob and Calvin and I swam off checking out this beautiful reef.  It was so bright and colo 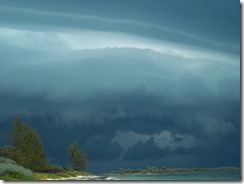 rful.  The sea fans were a deep purple and the coral was beautiful.  But there weren’t many fish and I wondered where they all were.  There were a few large ones swimming around, but not many as there should be.  I heard David call my name so I poked my head up and David yelled time to go.  I thought, but I just got in.  He 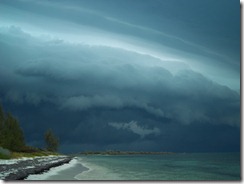 again said in a calm and serious voice, let’s go.  So Calvin and I quickly swam back to the boat.  I saw that Isabel was already in the boat and I wondered if Rob saw a shark.  I told myself to stay calm and get back to the boat. As we approached David said, storm.  I looked up and, Wow, the clouds were quickly rolling in, dark and ominous.  It was coming fast.  David pulled the rest of us up and we were off.  We needed to get someone back on the boat in case our anchor didn’t hold and because we had left Matthew sleeping on the boat while we went to play.  I told David instead of heading to the beach to pick up Susie, Savannah and Benjamin, to take me back to the boat first.  The waves had picked up and were really rolling and the storm was coming fast.  As we reached the boat it was really rocking, we had anchored near the Cay, which unfortunately left us open to the ocean inlet and we were getting hit with the storm waves.  It was a little difficult to grab the ladder to climb up the boat, but I made it.  David was ready to head off to the beach, but I said leave Isabel and Calvin, so the Dingy would be lighter, but by the time We got them on the boat the storm was overhead and the waves were worse.  Rob and David climbed aboard and hauled up the dinghy.  I watched the beach and saw them watching us, but by the time we got the dinghy put a way, it took all 3 of us to keep the motor from swinging too much and hitting the boat, Susie and the kids had left the beach and headed up to the porch of the beach cabana to wait out the storm.  We had left them the hand held radio and tried to reach them on that but I didn’t know if they knew they had it in the beach bag or if they would turn it on.

Just after we had put the dinghy up I noticed that the boat did not seem to be swaying as much as before, it seemed like the storm was lighter, although looking around that was not how the sky or waves looked.  As I walked back inside the boat I found Isabel and Calvin huddled together in the pilot house under a towel trying to dry off and warm up.  They told me that everything was going to be okay, because they had said a prayer to ask for Heavenly Father's help.  They asked him to keep the kids and Susie safe on the beach and for the storm to pass quickly.  I told them Heavenly Father had heard their prayer because the storm already didn't feel as bad as it did before their prayer.  I was happy to hear that in times of need, my children remembered to ask the Lord for help, and then believed with great faith that he would help us.  And He did.

We turned on the radar and watched the storm pass.  About 40 mins later it seemed the worst had passed and we put the dinghy back in the water and david rode off to the beach to retrieve the rest of our group.  They had been safe on the cabana porch but were happy to be back with us.  We got them on board and waited out the rest of the rain and storm together.  Once it had cleared we needed to move the boat and find a more protected anchorage for the night.  I was sad to leave Moraine Cay and the beautiful reef that I did not get to explore.  I hope we can go back.  We were very grateful that we were all kept safe during the storm and that the anchor held the boat safely was the winds and waves blew around us.

Susie captured the storm pictures from the beach.  They look amazing.
Posted by The Blood Family