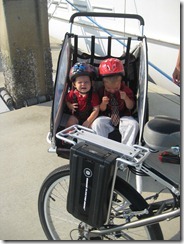 It was 5.5 miles to church, do we decided we’d pull the bikes off the boat, hook up the trailers and get to church.  In Florida we bought electric assisted bikes.  They help you pedal, or give you a speed boost.  We thought with the trailers loaded with kids that would be nice over regular bikes. So now we had a chance to put them to good use.  We had used them previously a little here and there.  We got the kids d 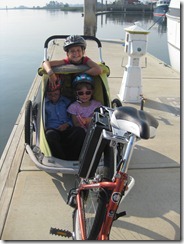 ressed and loaded, which took us a little longer than we had planned.  But off to church we went.  We arrive a little late, but we made it, and since it was Sunday morning, traffic was not much and the heat was not bad.  I am sure we will be doing this again.  It was fun, and we could get to church. 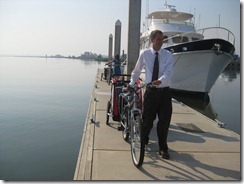 As we were walking in the chapel to take a seat, I heard a thump and a terrible scream.  I looked to see Benjamin sprawled on the floor screaming in the middle of sacrament meeting.  I had the baby but tried to pick him up too to see what was the matter.  David quickly came and carried Benjamin out, as he leaned on to his dad, I saw what had happened.  He had a gash in his eyebrow.  He must have been running to keep up and didn’t look where he was going and ran into a bench.  He split his eyebrow open; it was bleeding all over and quickly swelling.  We rinsed off the gash and grabbed some ice to stop the swelling.  It was fairly deep and needed something if not stitches.  The boat is not far, but we are on bikes.  We walked out to the foyer where 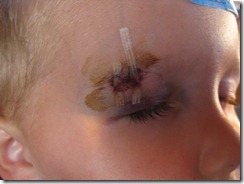 I asked an older gentleman if he knew where a first aid kit might be.  He saw Benjamin’s gash and said he’d be back.  He grabbed a sister off the back bench who came out to look at Benjamin.  She is a Dr.  and said she’d run home to grab some supplies to help.  It’s is comforting to know there are good, helpful people in this world.  They could have just grabbed a first aid kit or said, he should go to the ER for stitches.  But this good sister went home for some supplies, and then the store b/c she did not have any steri strips in her supplies to close the wound.  She came back as Sunday School was starting, she even brought a lollipop for each of the kids.  The others were in Primary, but Benjamin loved his lollipop and it sure made cleaning his cut and bandaging it easier.  It was so swollen, he had a huge lump over his eye.  She even gave me the rest of the steri strips she had bought.  Which with Benjamin, I may need them again.  Just a few days before he had hit is forehead on his dresser and made a small cut on his forehead.  He seems to be our most accident prone child, luckily the gash on Sunday has been the worst so far.   I took the above picture 2 days after his accident.  His whole eye turned purple and blue.  It looked like a good shiner.  We feel very blessed to have been at this ward on Sunday.  We are very grateful for this kind sister that helped us.  All of the members we met in the ward were very nice.  We enjoyed attending church there.  After a few weeks of not being able to attend due to travel in remote areas, it was so uplifting to be among these angels and worship with them.