We had a lovely Thanksgiving Holiday here in Poland.  We woke up at the usual time and sent the kids off to school.  On thursdays they have gymanstics at the school after school, so they stay till 2pm.  Meanwhile at home, I was busy cooking a turkey, dressing, banana cream pie.

On Sunday the missionaries organized a Thanksgiving dinner.  We were going to have it at the church, but then after finding out who would be able to make it we decided to do it at our apartment, which was a much better idea than having to take a turkey on the bus to the church, since we were making the turkey. 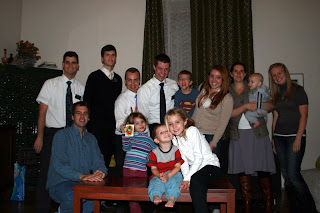 So on Monday David and I set out to find a turkey.  They have turkey parts, but not whole turkey's in the the stores.  You can get a whole chicken, but  not a whole turkey typically.  So after a little online research (I am so grateful for the time that we live in) we found that a grocery store about 20 mins away by tram does have whole frozen turkeys.  So off we went and sure enough, they had a couple of turkeys.  We bought the largest one at just under 6 kilos, so about 13lbs, not very big, but a good size for us.  There would be 12 of us total. Our family, Kylynn, 4 missionaries, and an exchange student.
I made the turkey and stuffing, and then decided to make an extra dessert just in case.  So we made a banana cream pie.  The pudding mixes here are not instant and need to be cooked on the stove.  After making the pie we had a little extra pudding and as we tasted it, we found it to be a little different.  The consistency was different and the vanilla flavor was lacking.  It still turned out fine, just different then home.
﻿
﻿

Kylynn made a fruit salad.  The missionaries brought juice, and mashed potatoes and carrots.  The exchange student Alexis brought rolls.  We had a nice dinner and enjoyed the company in giving thanks for the many blessing we have.
As the missionaries left they told us that on the way over on the bus an older lady had asked them what they had in their pots.  They told her they were celebrating an American holiday of giving thanks and that they were taking food to a dinner.  She looked in their pots and pulled out a plastic bag and a knife from her purse and began scooping mashed potatos into her plastic bag.  Then she asked to see in the other pot and they showed her it was carrots and so she started scooping those into her bag too.  very weird.  I guess i was glad to hear this story after dinner, otherwise i am not sure i would have eaten any potatoes or carrots.
Posted by The Blood Family