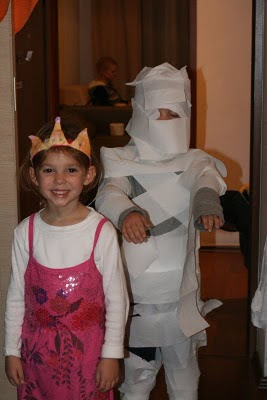 In Poland they do not celebrate Halloween. Before we left home I had prepped the kids for this so it wouldn't be a shocker when Halloween was upon us. They had asked if they could still trick or treat, so i then had to explain that because there is no Halloween, there is no trick or treating. So I had told the kids we could still have it as a family. In school the week before, in their English class, they got to help their teacher teach about Halloween to the other kids. 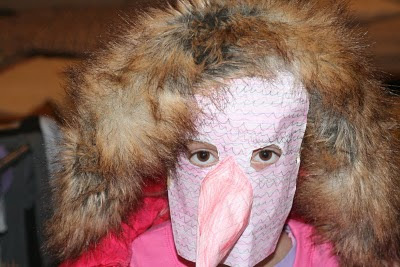 They thought is was fun to be able to share with them about our culture. When the weekend came, the kids asked us about what costumes could they wear, so i told them they would have to get creative and make them. So they did! And they did a great job. Savannah made a mask and colored it to be a pink bird. Calvin wanted to be a mummy, so we wrapped him in toilet paper, and Isabel of course wanted to be a princess, so she wore Savannah's sparkly dress and made a crown to tape to her head band. And then they knocked on the bedroom and bathroom doors inside our apartment to go trick or treating, where they recieved yummy european candies. They even recieve a surprise from Kylynn who opened her door dressed as a ghost.
Posted by The Blood Family