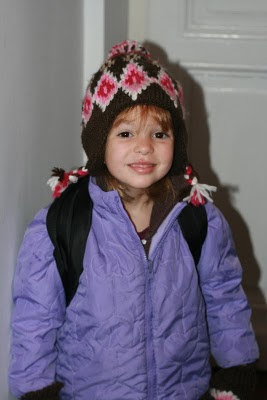 While reading the school's website here David realized that Isabel is old enough for school here. Back home she has to wait till next year because the cut off date to be 5 is the end of August. Here it is the end of the year. So we talked with the principal and signed her up. So on Wednesday Isabel started Kindergarten in Poland. She was so excited to go off to school like her older siblings with her backpack and school supplies. It was a fun first day for her. She said there are only 4 boys in her class and the rest are girls. She starts school 30 minutes after the other kids and gets out 10 mins later. The school provides before and after school care for free so she will go there till her class starts and then all the kids go there after school so they have time to play and make friends. There is no recess or lunch time during school hours, so the after school care is when the kids can play with the other kids. It has helped to let them spend 30-60 mins there each school day as now when we pick them up they have lots of kids saying goodbye to them.

On her first day though, Isabel did not know that the other kids go to the after school center so she thought Dad was coming to get her so she wanted to wait in the Lobby for him. When Dad didn't come she started to cry. She said she thought he was never going to come. When David showed up she had stopped crying but started again when she saw him because she was so happy he came to get her. We felt bad because we had not explained to her that we wouldn't be there right after school. The next day we all went to pick her up on time and she was happy to see us. Today she stayed and went to the after school center and played with her friends and when i went to go and get her she didnt want to go because she and a friend were coloring. She has adapted quickly.
Posted by The Blood Family