Just up the road from Banff National Park, is Jasper National Park. The 2 parks are joined together by the Icefields Parkway, a beautiful stretch of road with mountains, flowers, glaciers, wildlife, and just beauty! 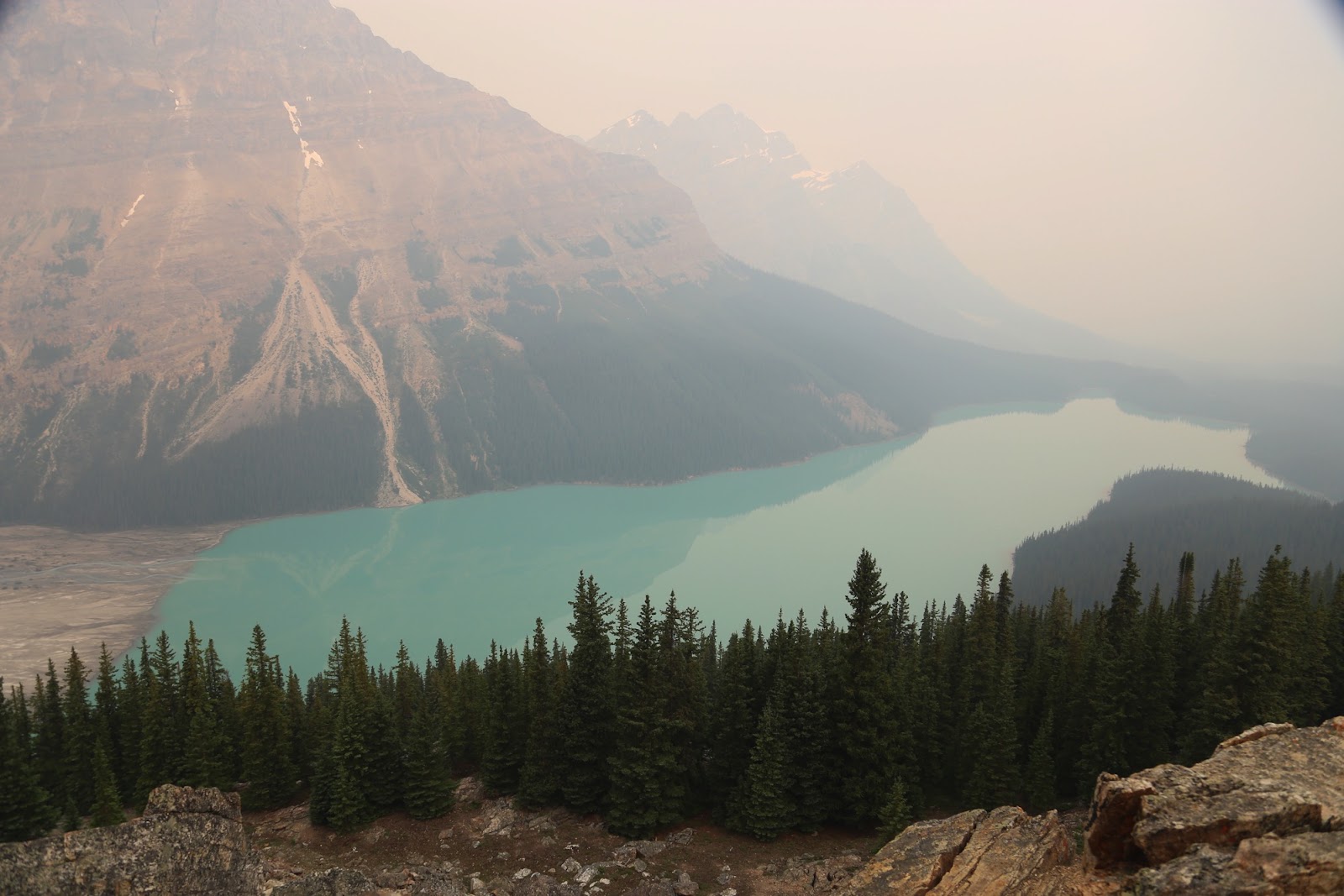 We got an early start so we could make some stops before the crowds and not have to worry about parking with the trailer. Our first stop was Peyto Lake. A beautiful lake colored by the glacier wash full of minerals. It was a bit overcast that morning, so the fog did not let me take the best pictures. The kids loved this lake because they thought it looked like a coyote head! 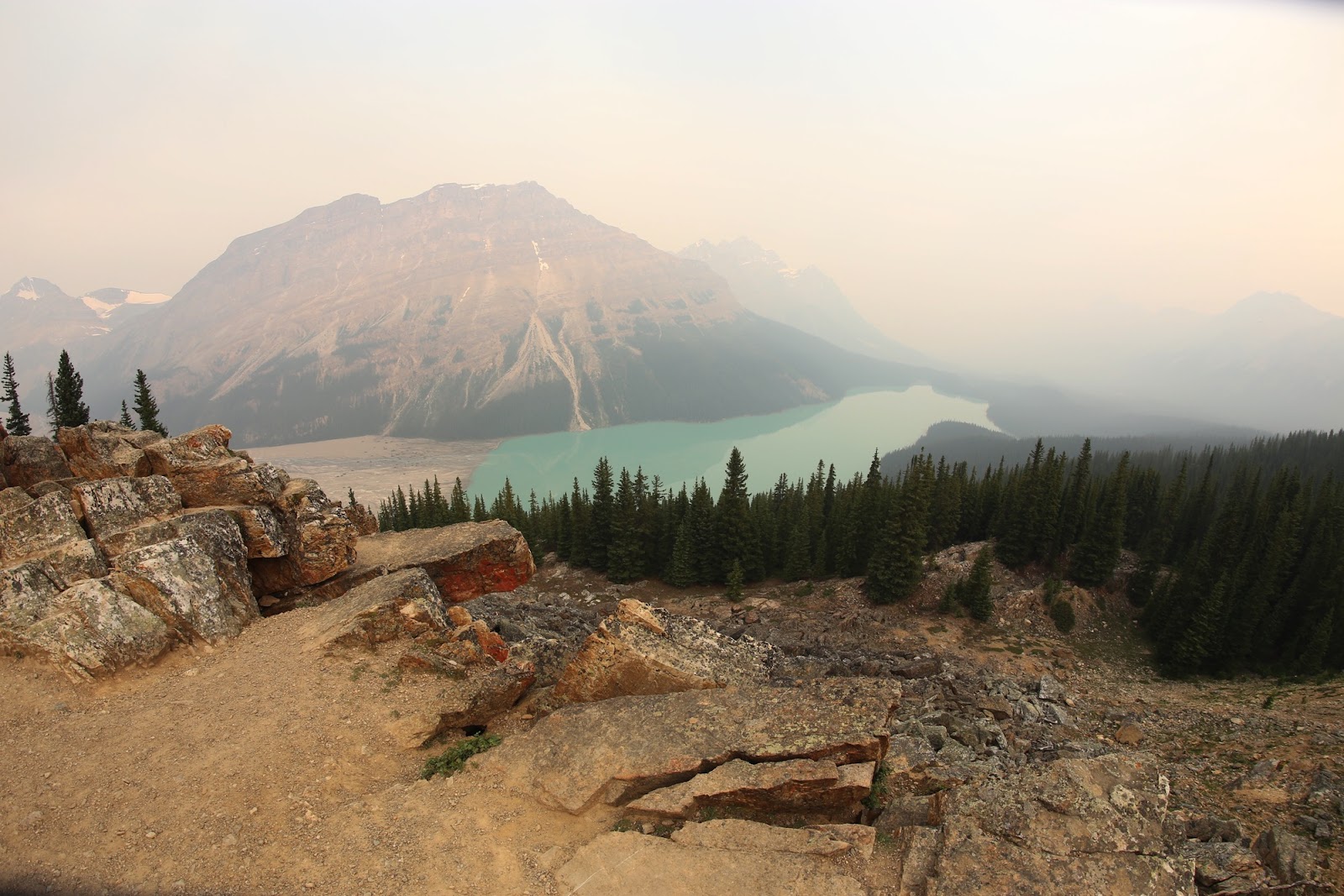 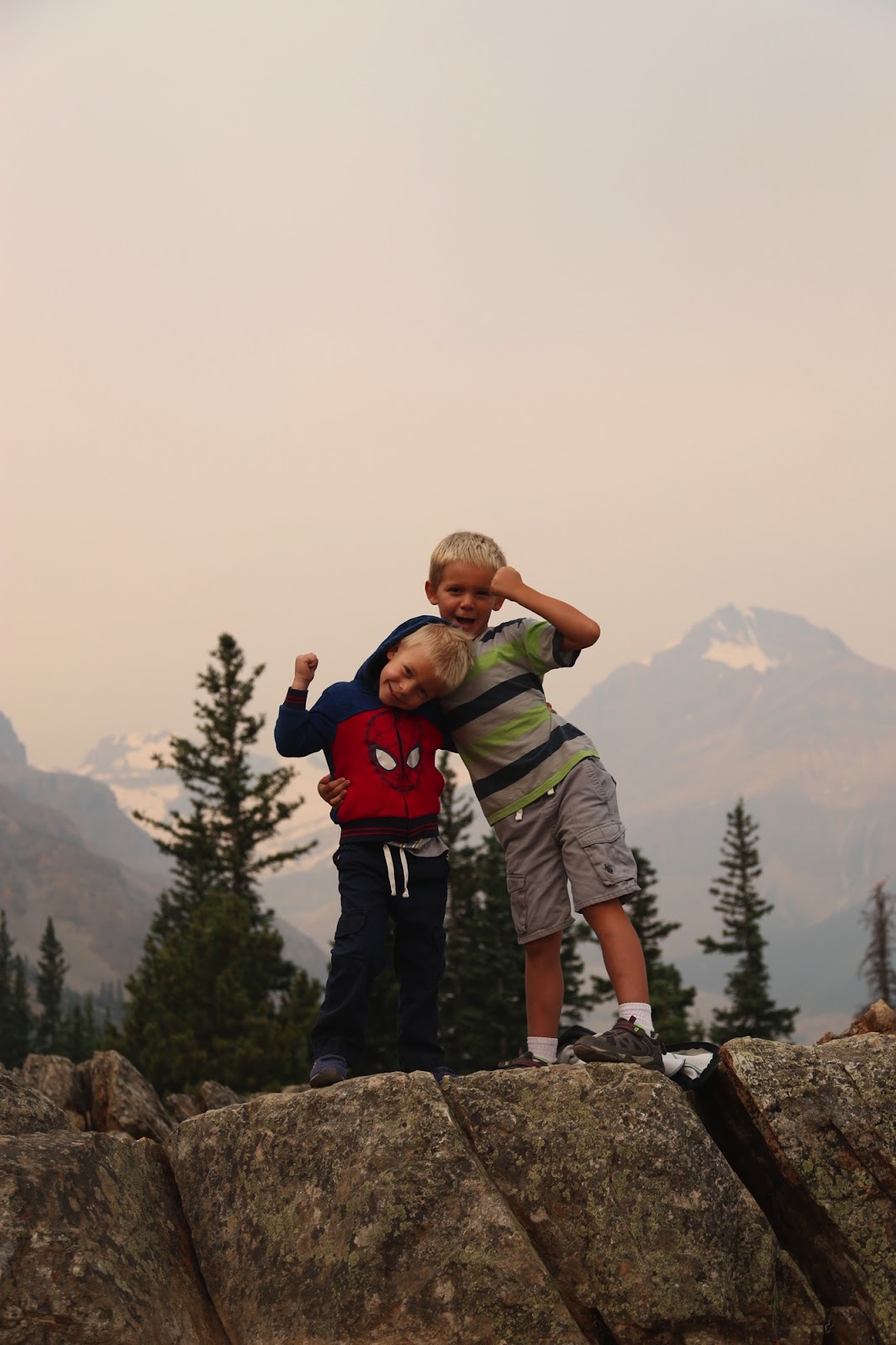 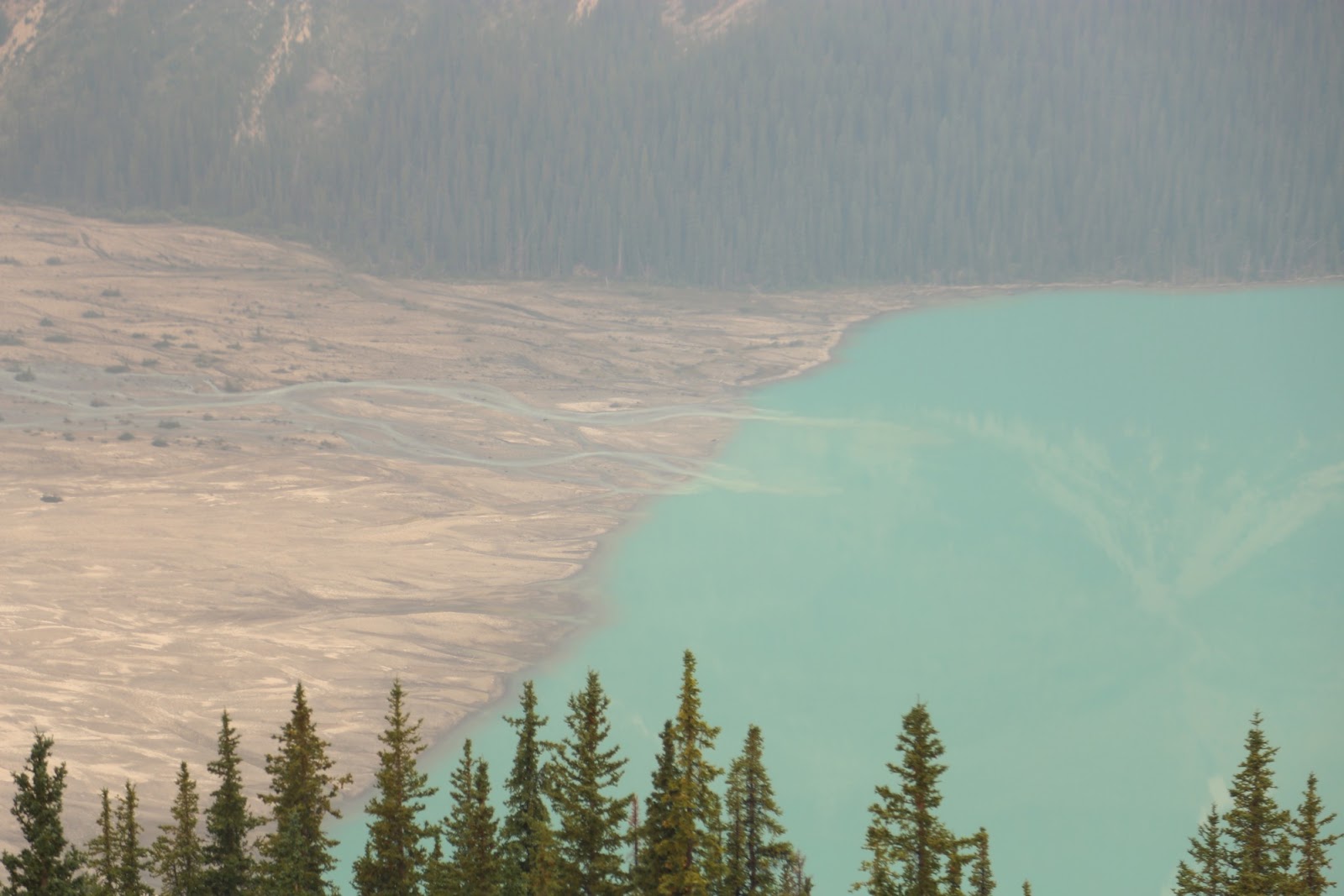 Next stop was Mistaya canyon. A short hike down from the road brings you to a beautiful overlook of a water carved canyon. Both Banff and Jasper are filled with examples of water at work in carving these beautiful canyons. I never tire of seeing them! The narrow winding walls are just beautiful to witness. I'd given the kids a granola bar on the hike, and both Matthew and Alex had unwrapped theirs and thrown the wrappers on the ground. After a talk about trash, and keeping it until we find a trash can, they both decided their trash would be better hidden under a rock. So to help the understand the seriousness of trashing your trash, we grabbed a plastic bag and had them clean up trash. The trash at peyto lake parking and this parking spots was sad to see. I don't understand how people want to come see the beautiful nature and than ruin it by leaving their trash behind. But it was a good lesson for the boys to learn to make sure to keep their trash to dispose of properly. 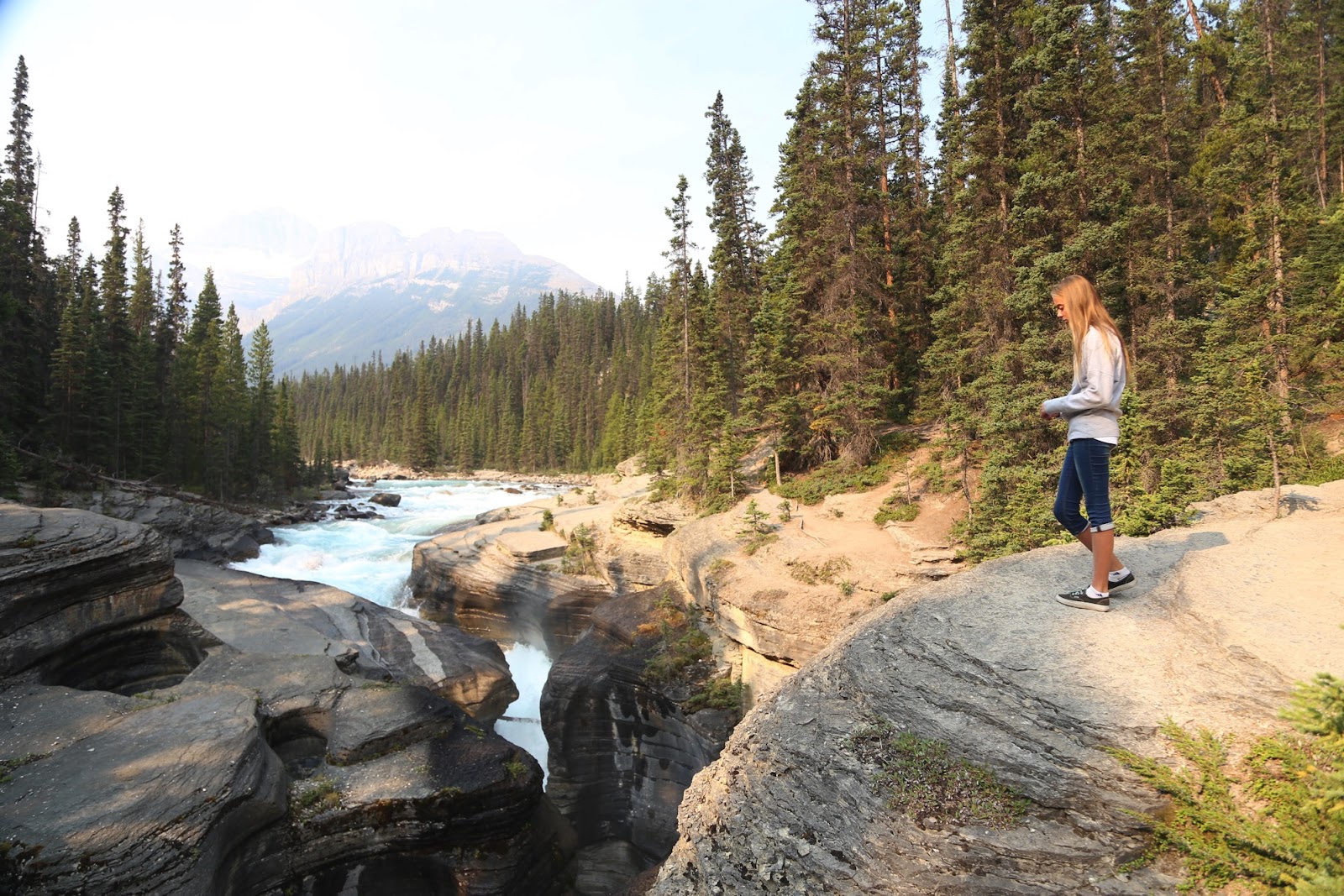 We made another short stop just down the road. The forest had been burned in a fire in the last several years, and the underbrush was starting to grow back as purple flower weeds. It was just beautiful- the thriving purple flowers contrasting the burned trees. 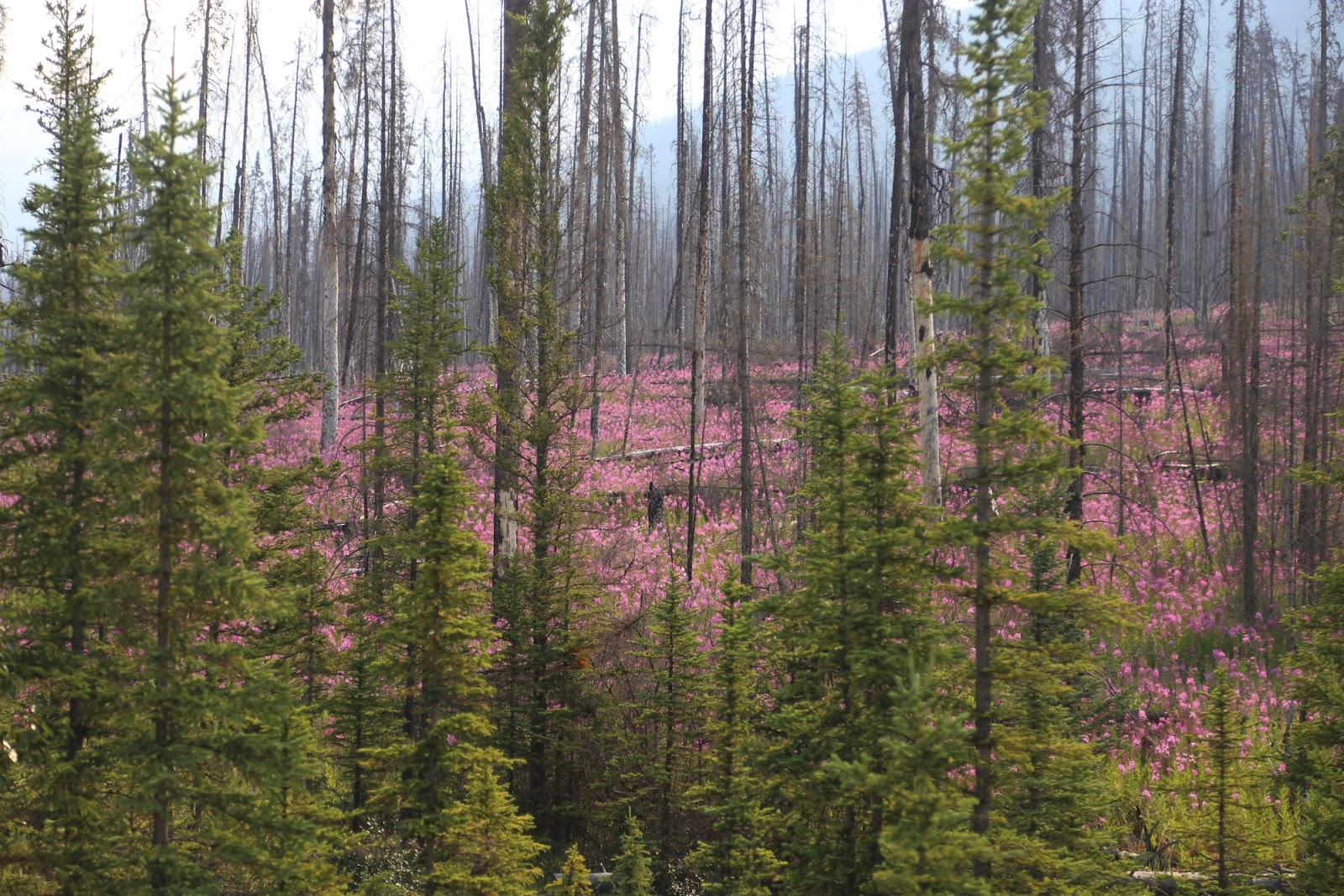 We found a lunch stop just 30 mins from Jasper at Honeymoon lake, at a little campground. From here we headed to our campground, while Despains dropped their little trailer at their cabin for the next 2 nights. After setting up camp we all hopped in the van and drove to Maligne Canyon. Another beautiful example of rushing water carving narrow canyons. It was a fabulous hike. David brought the unicycle and hiked it down the trail to the 5th bridge, where he was able to cut out to the road. He the took the unicycle back to where we left the van, then drove to pick us up. We continued to the end of the hike, the 6th bridge over the creek and as we walked into the parking lot, he was pulling in to pick us up. Perfect timing. He even stopped to see a Caribou on his way up the road, and checked out the first bridge, which we had somehow missed on our hike. 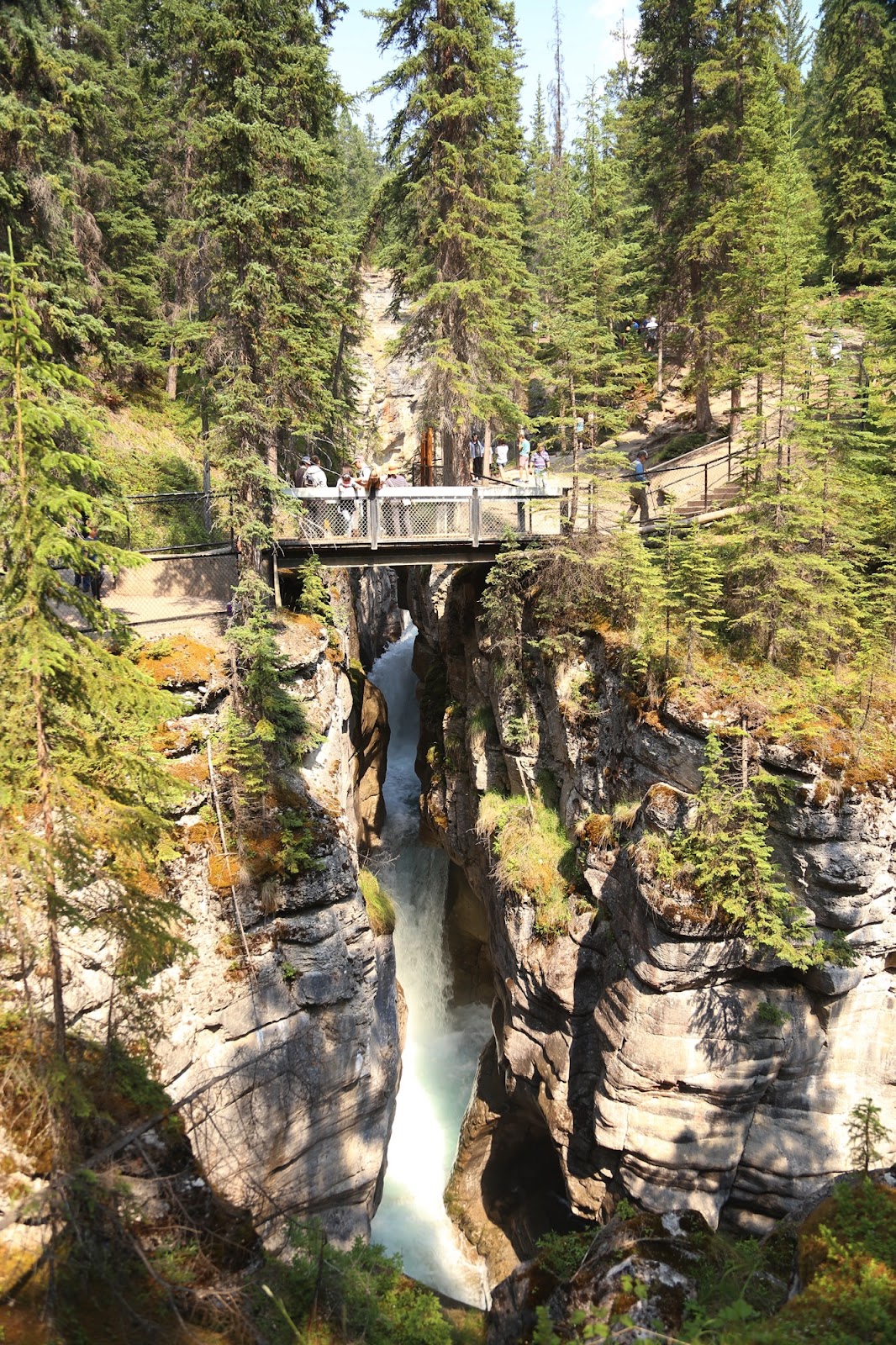 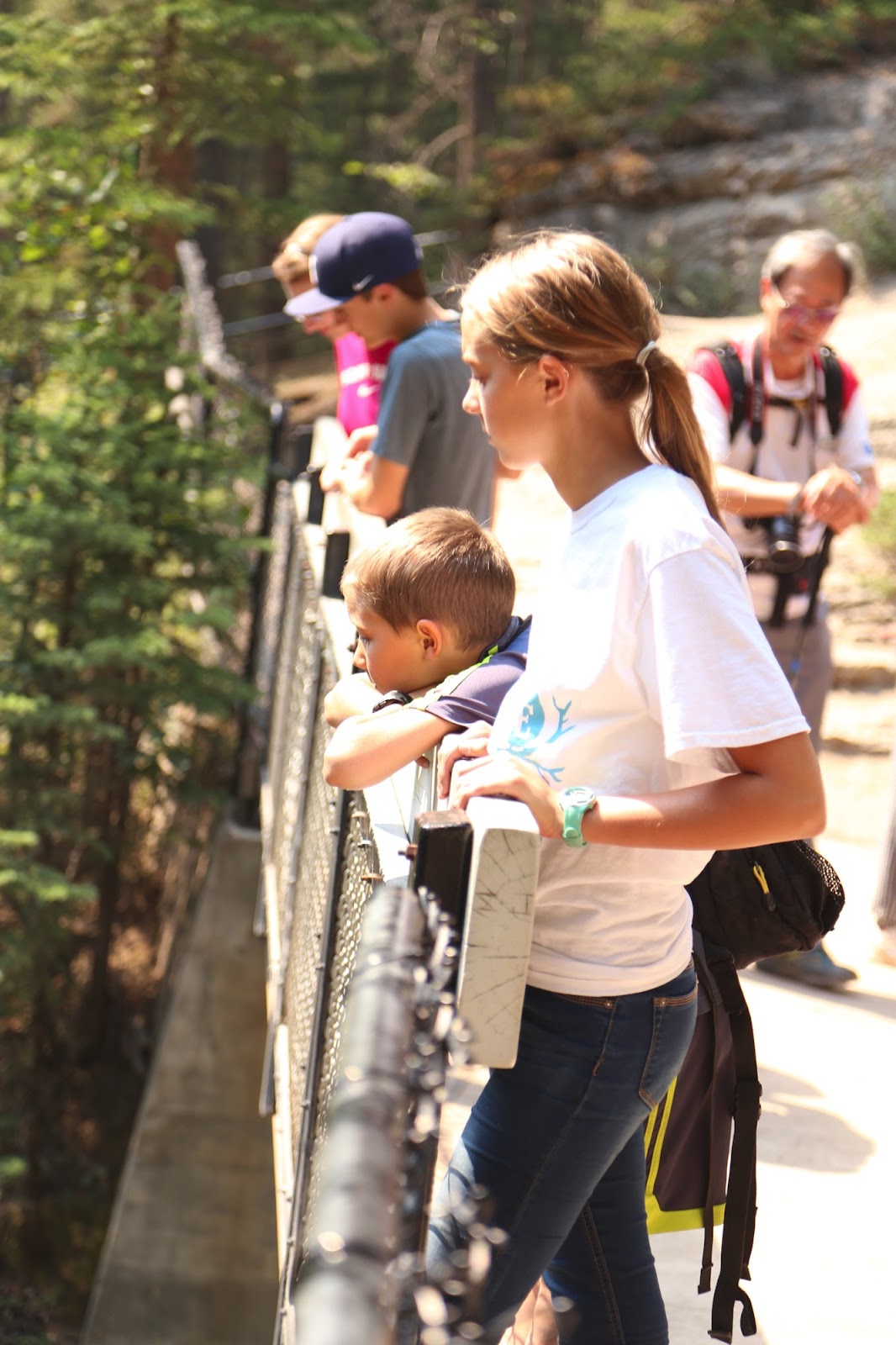 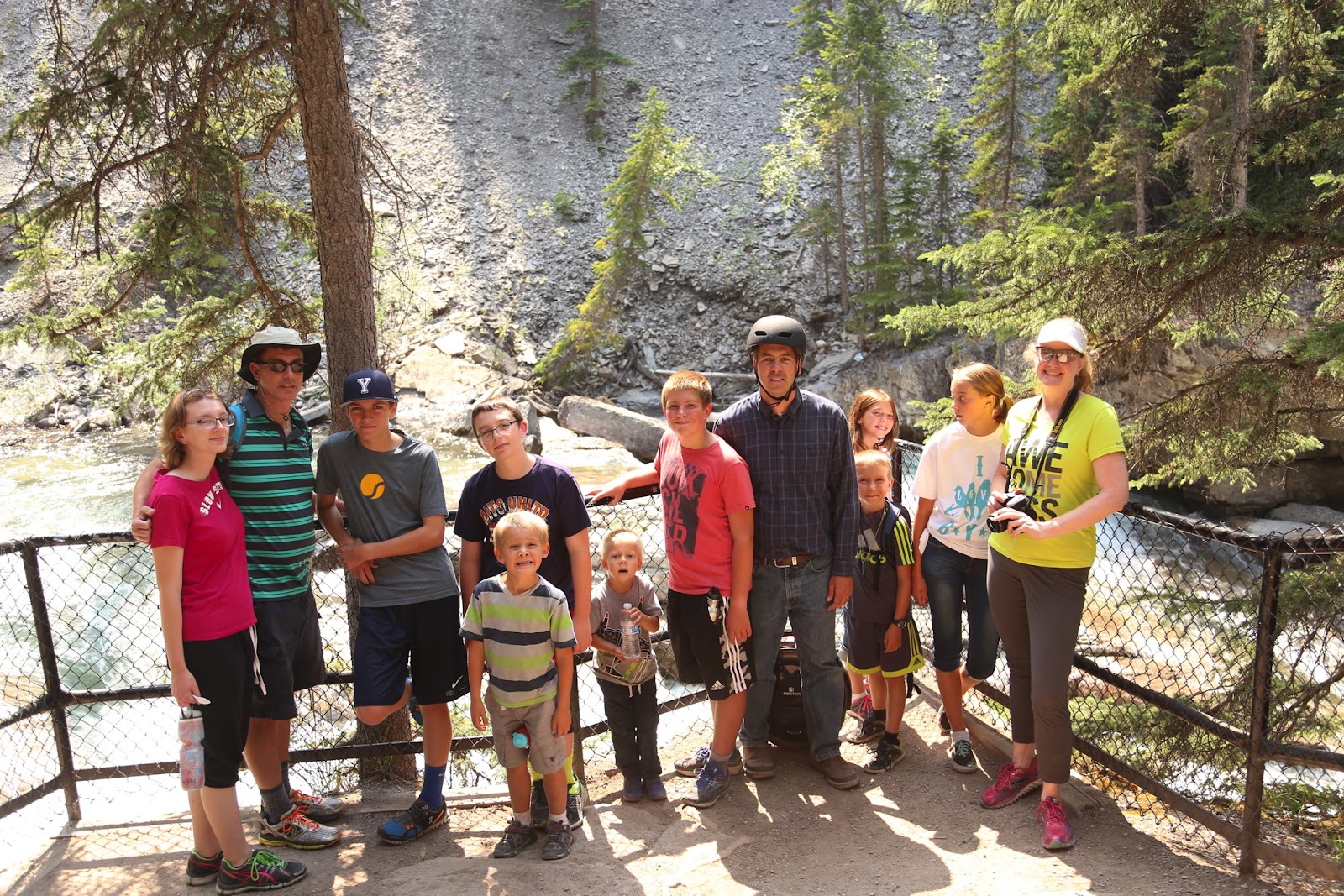 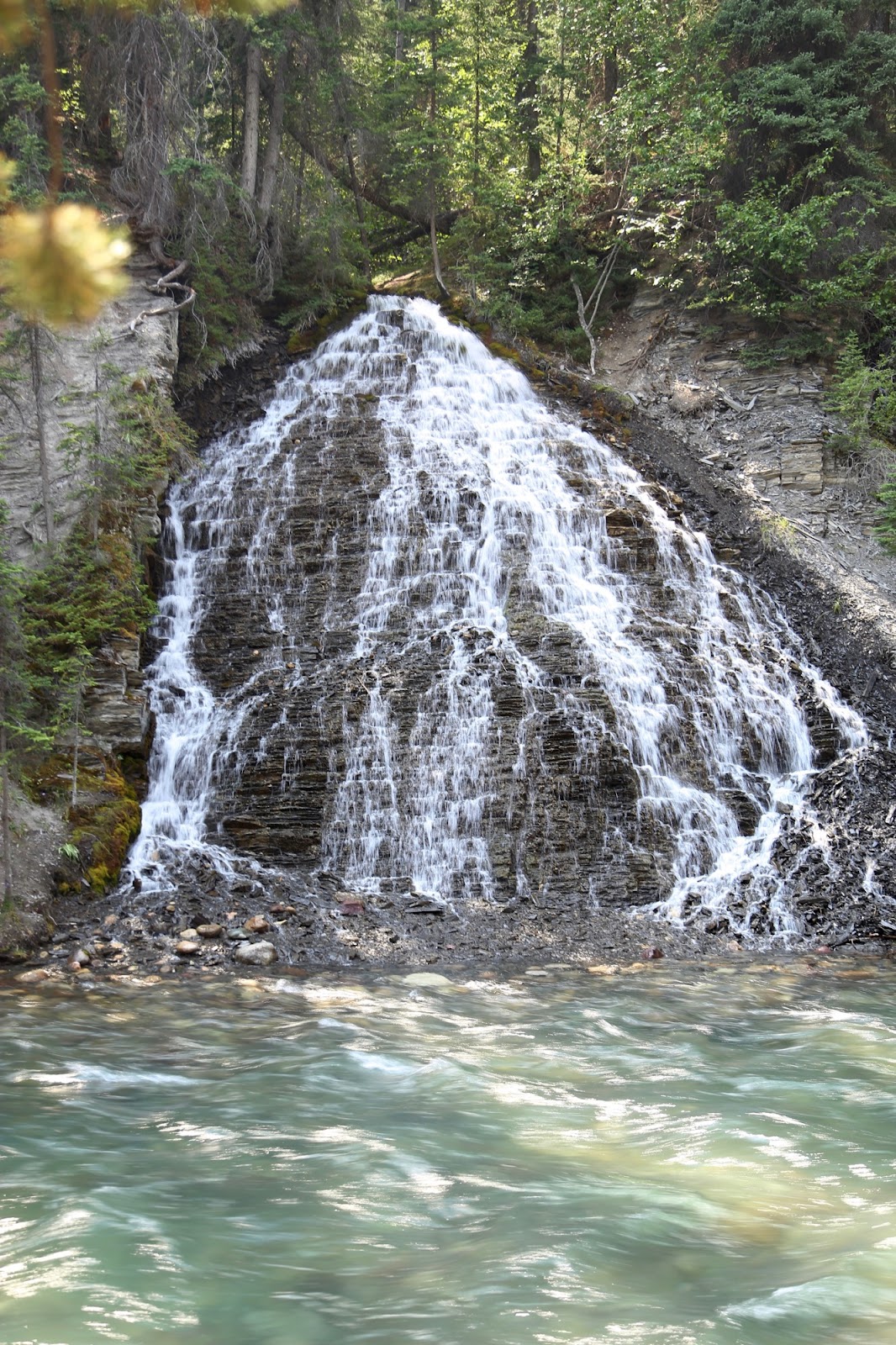 From here we headed out to Maligne Lake, another 45 mins up the road. We had a short chili dinner from the crock pot and then headed to meet our boat for a cruise out to spirit island. The views of the mountains were gorgeous! And the island was quite pretty. They have a short nature trail, but do not allow more exploring of the island as it is sacred to the native Canadians, which they refer to as First Nation. On the cruise I did learn that the Rocky Mountains are shorter than other mountain ranges because they are older, and eroding. Where as younger mountain ranges, such as the Himalayas are younger, taller, and in fact still growing. I did not know this before. 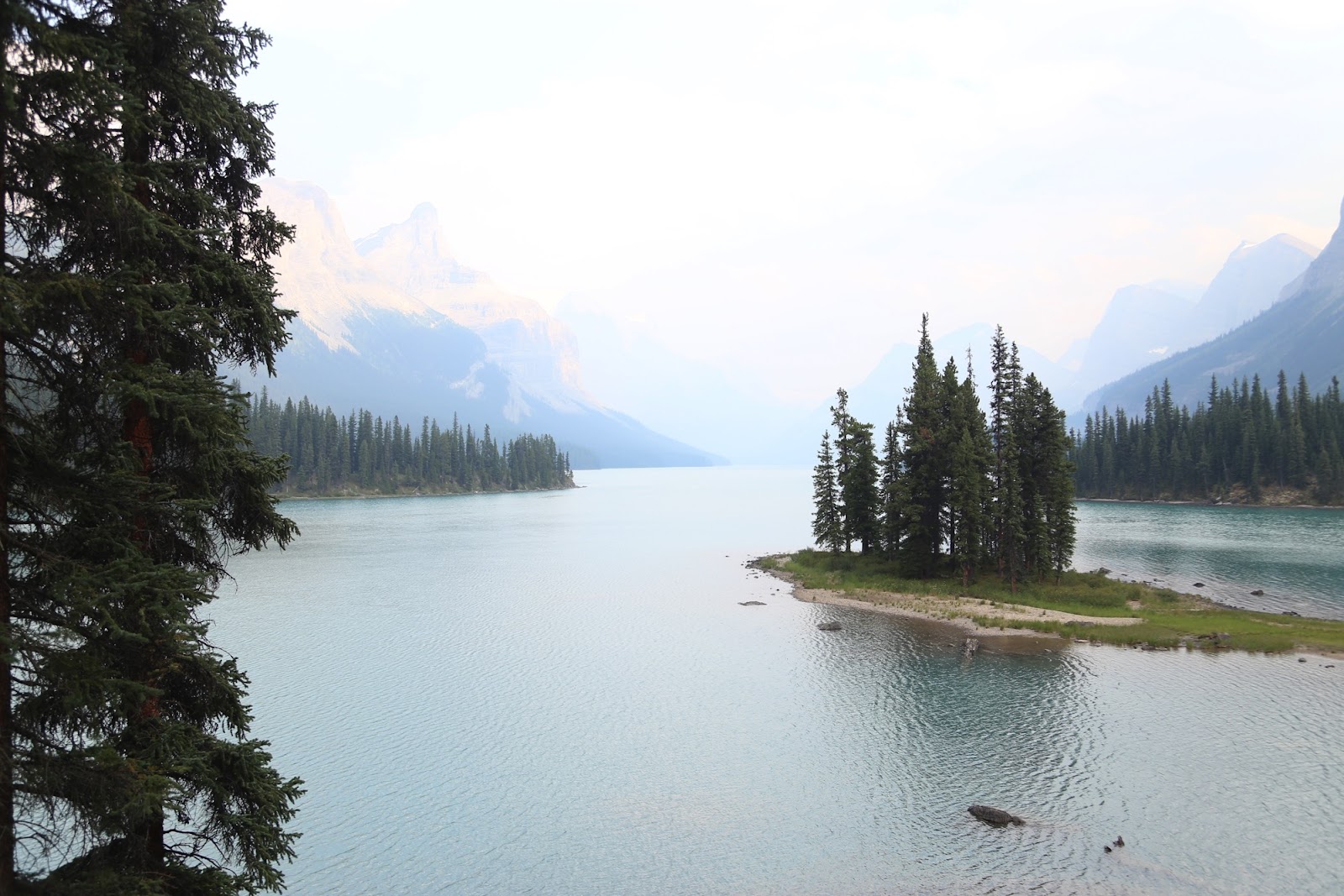 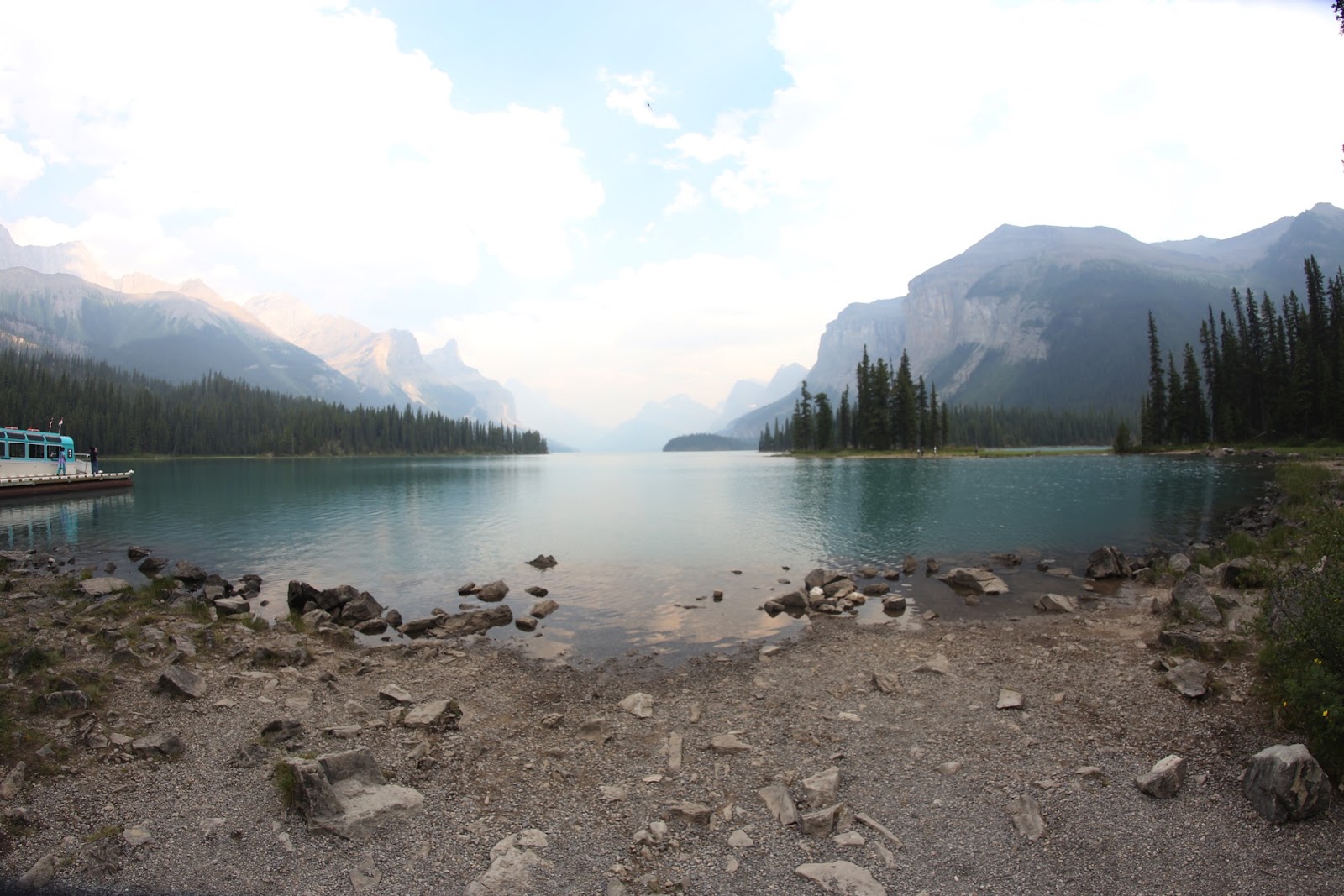 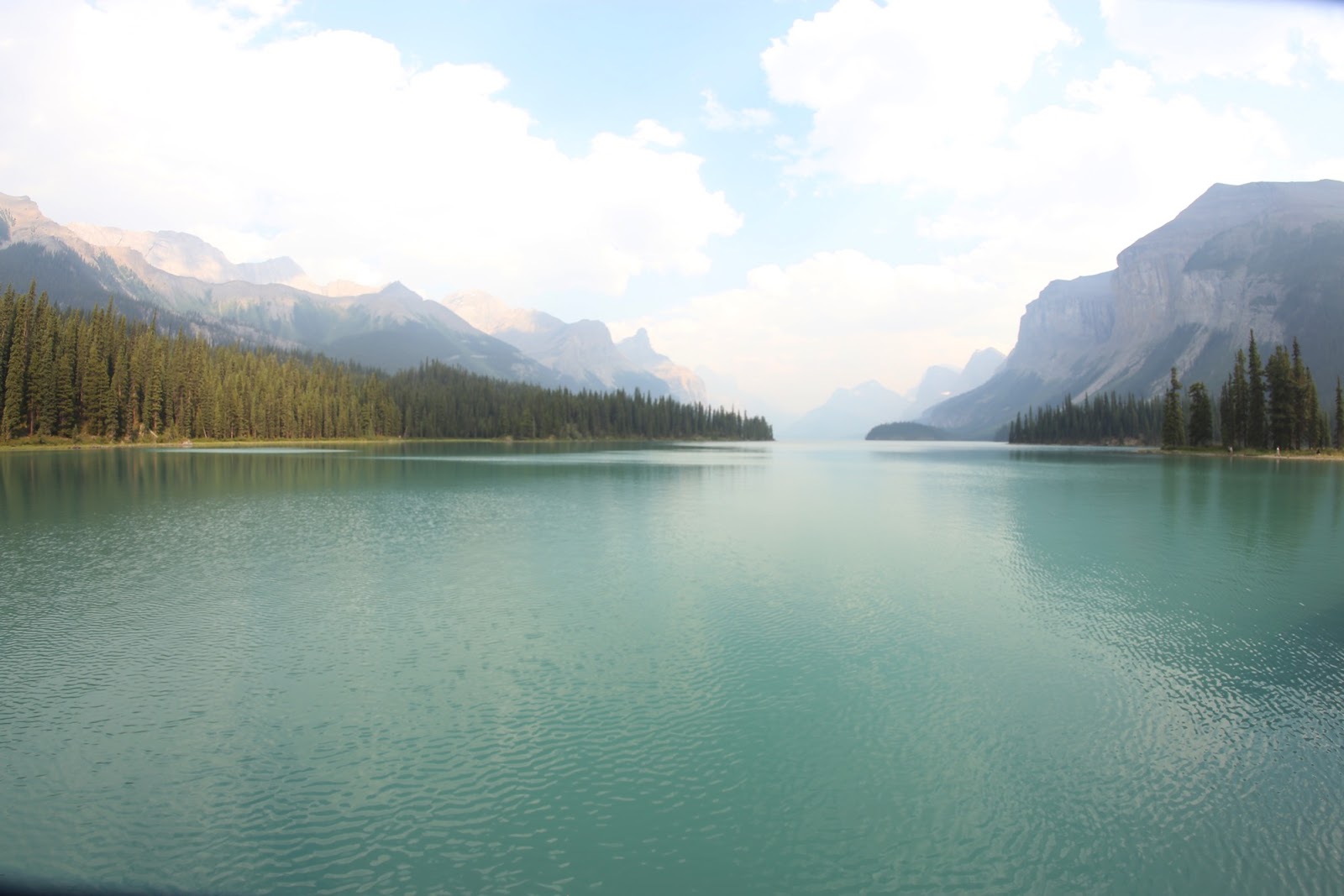 On our way back to town and the campsite we stopped by the canyon again so we could all see the first bridge and beauty. David convinced us it was worth the stop and it was. 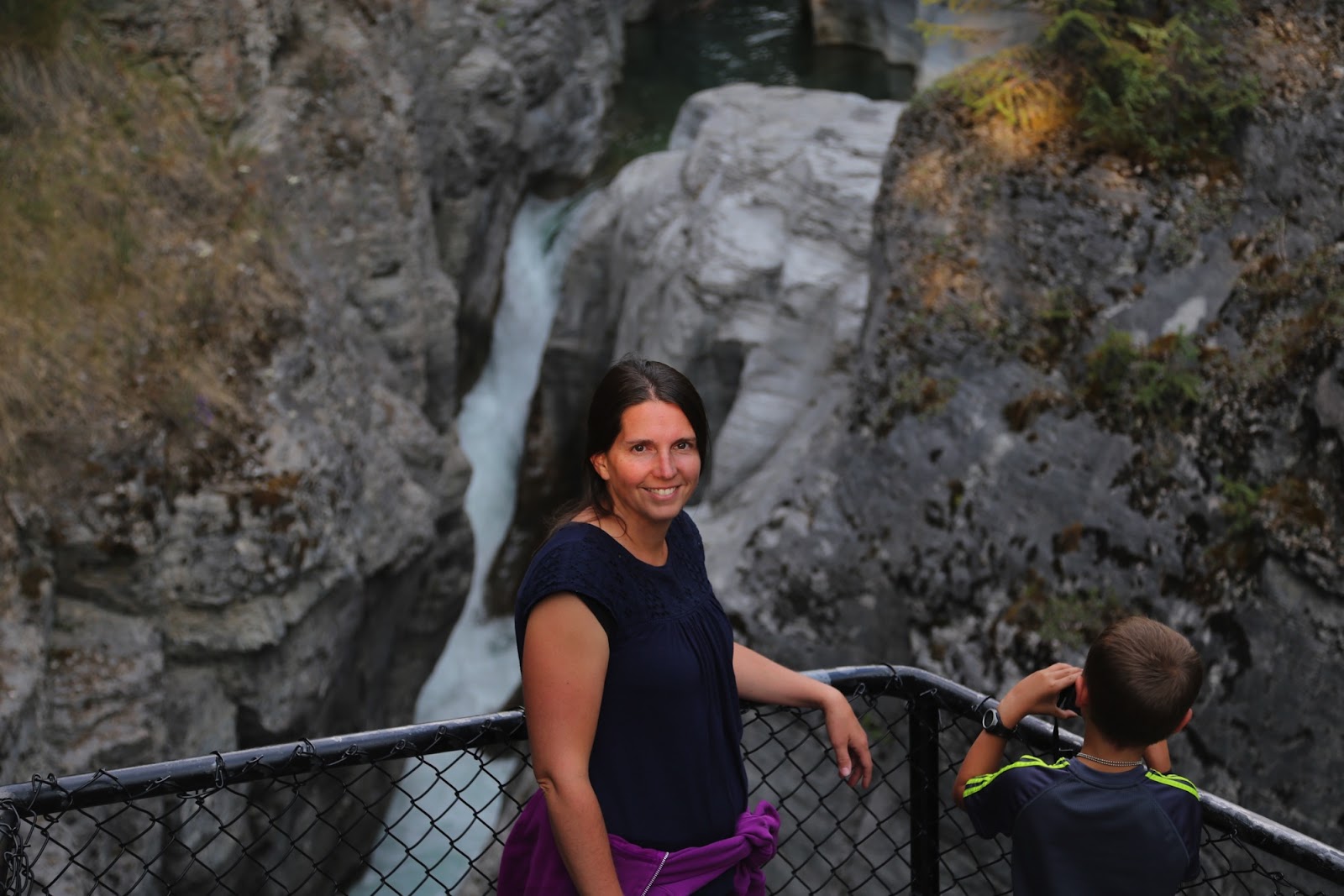 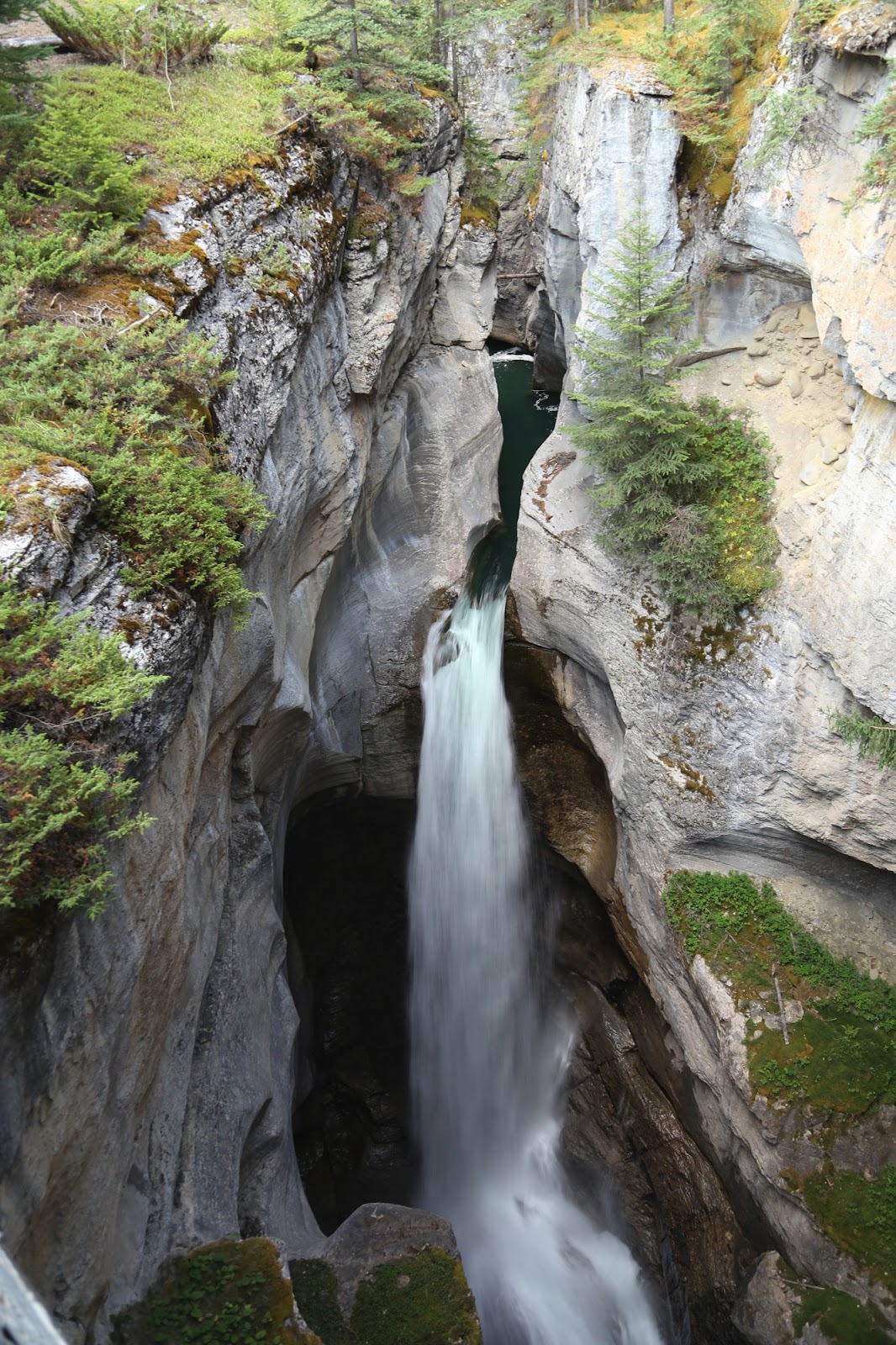 The next morning we headed down the Icefields parkway. We stopped at the Athabasca Falls and spent more time there exploring than we expected but it was so pretty. 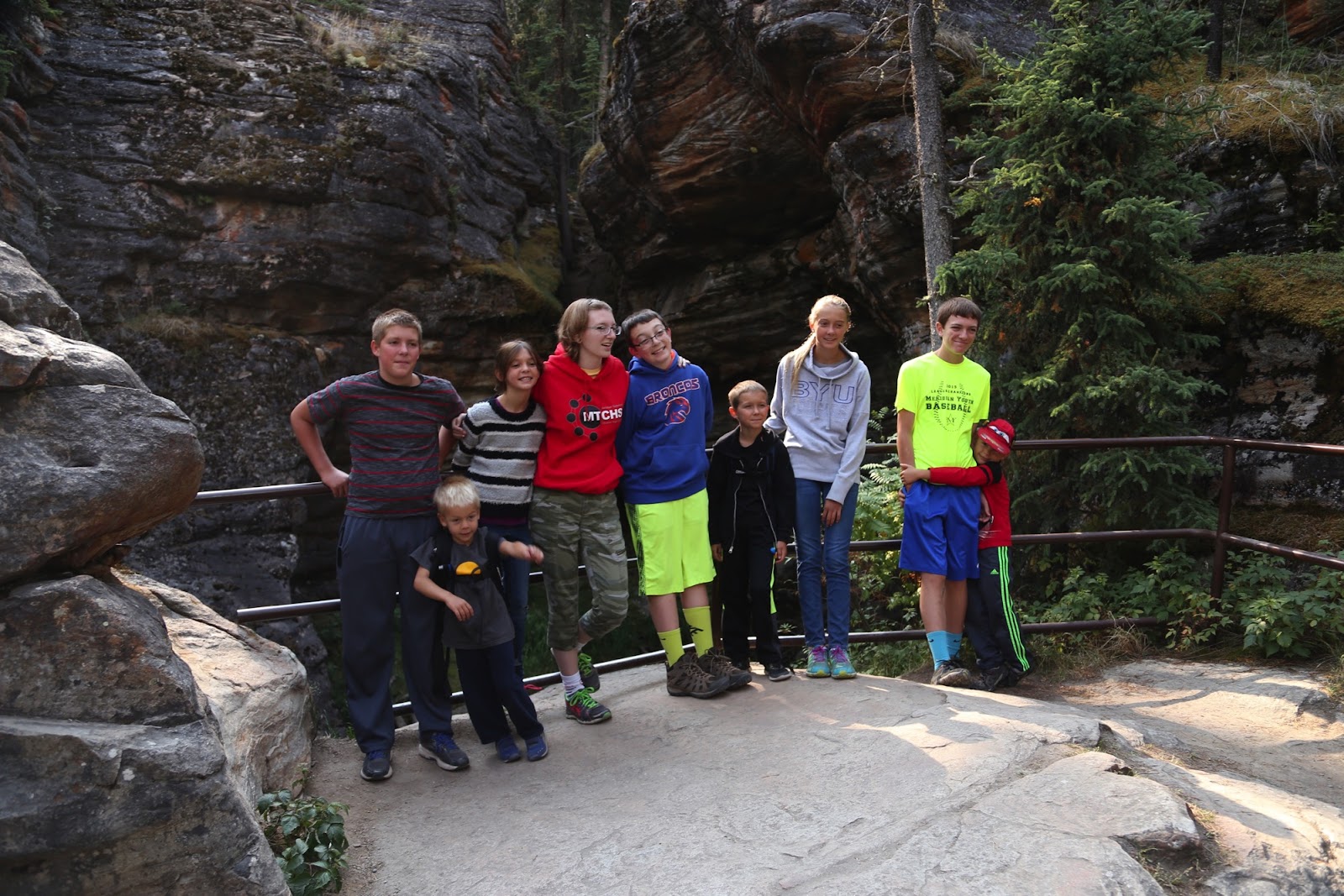 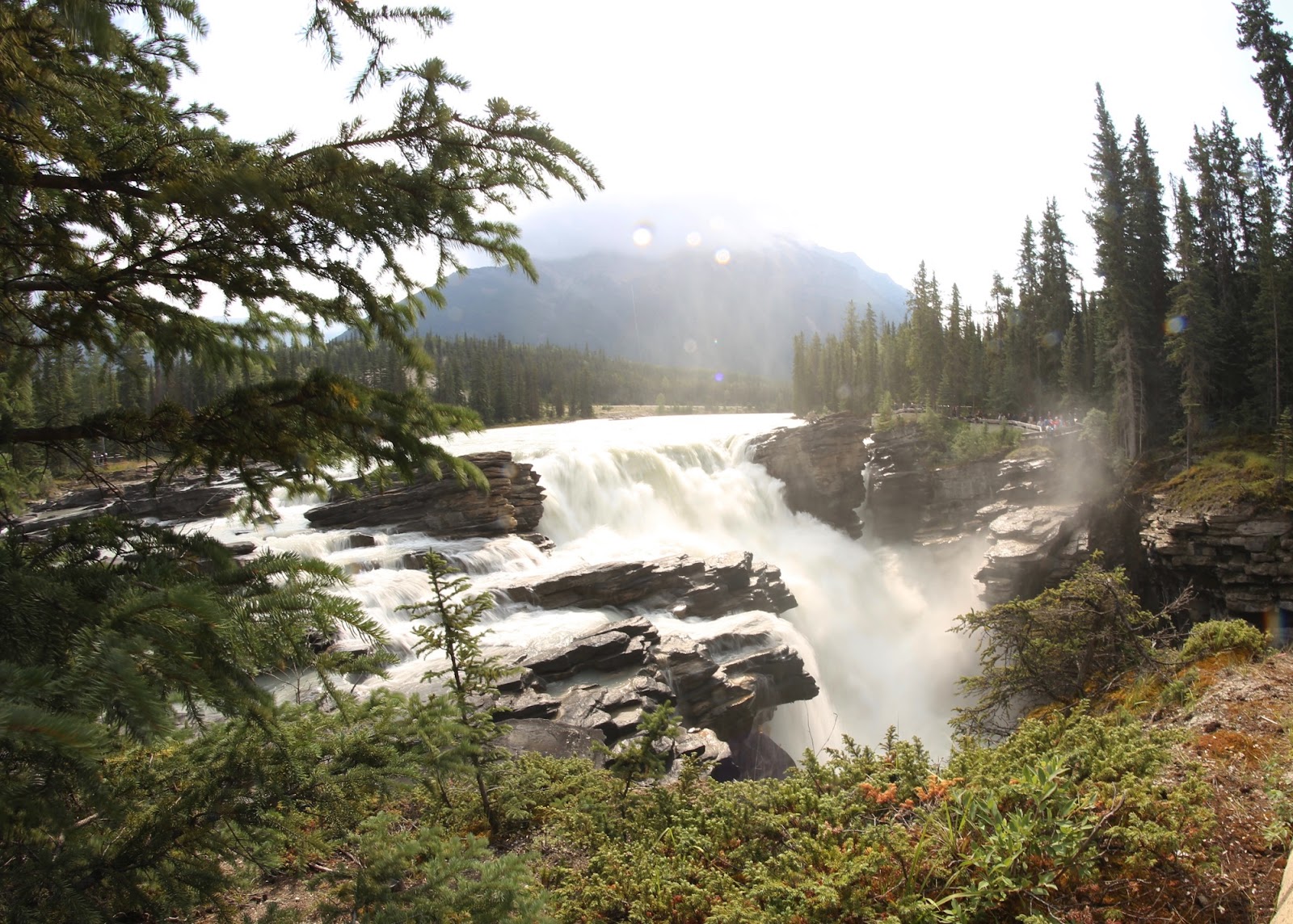 From there we had to head straight to the Columbia Icefield Center for our tour onto the Athabasca Glacier. We booked to go out on the Glacier in the mega tour bus with mega wheels. We grabbed our coats, hats, and gloves. It was definitely chilly, but the kids had fun on the bus, and then roaming around the roped off area on the glacier, hopping over streams of melting glacier water. They filled their water bottles, even though it wasn't "recommended". From here the buses take you out to the Skywalk, which frankly I could have skipped. But they had an audio tour, and David and the kids enjoyed learning and walking along the overhang. 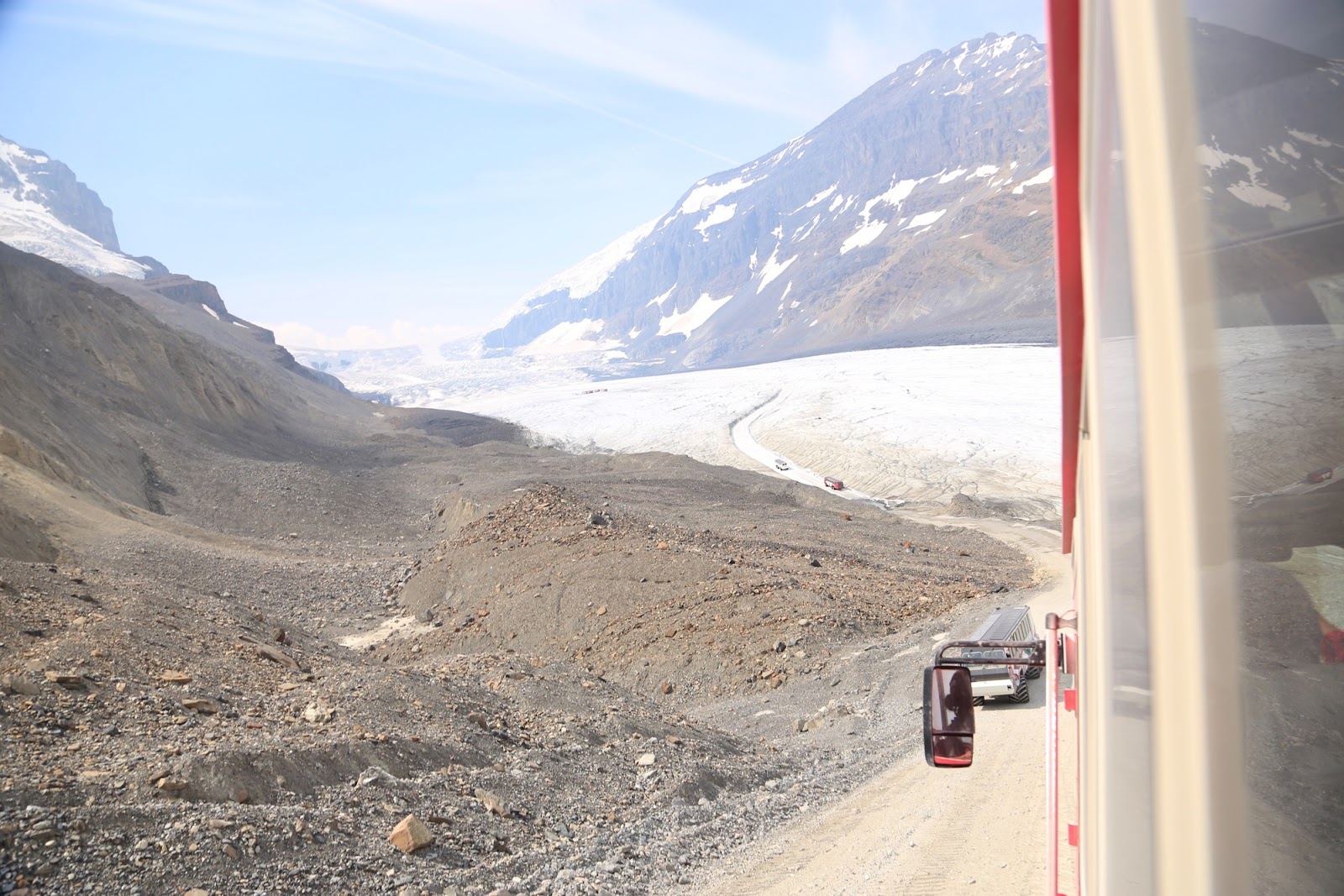 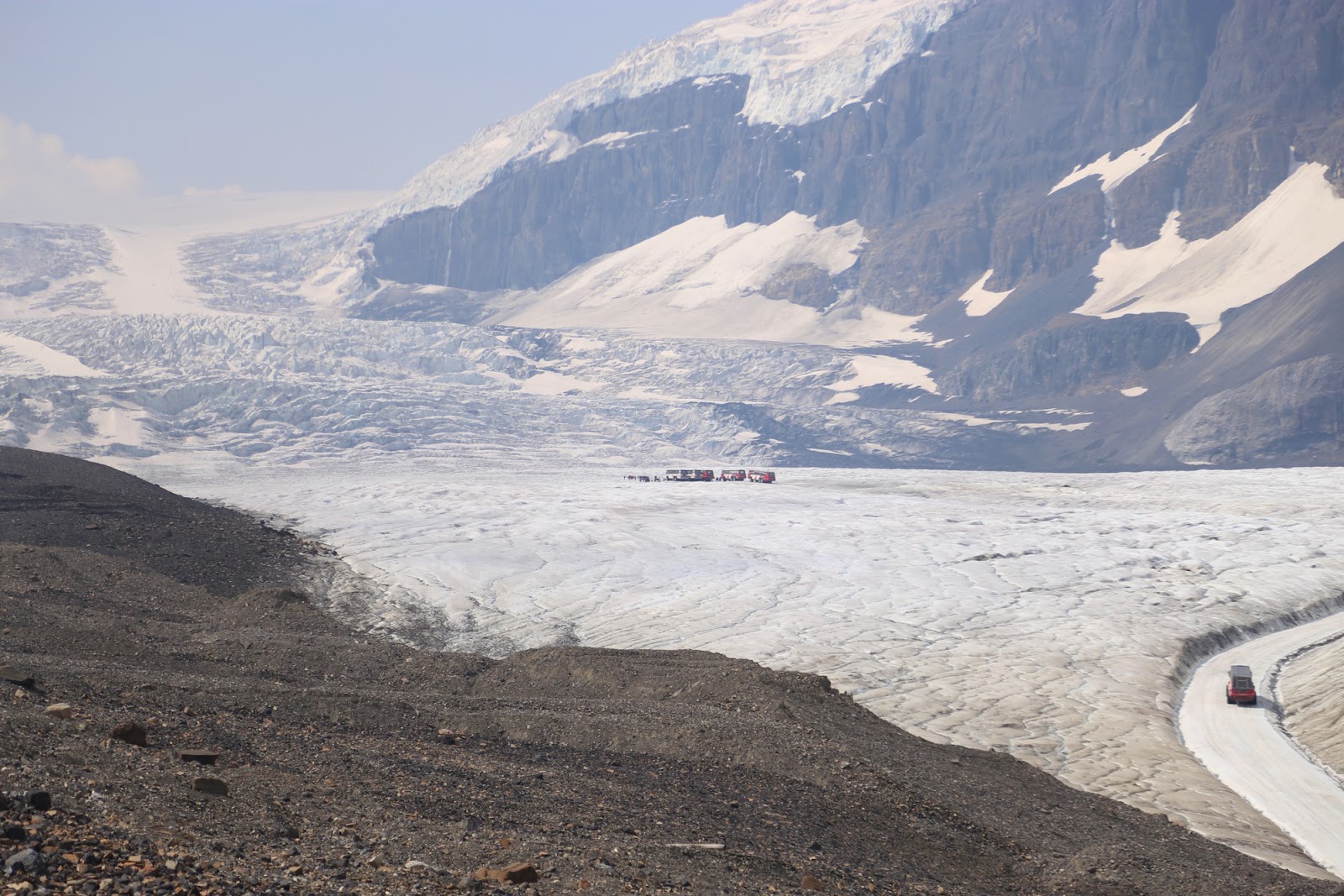 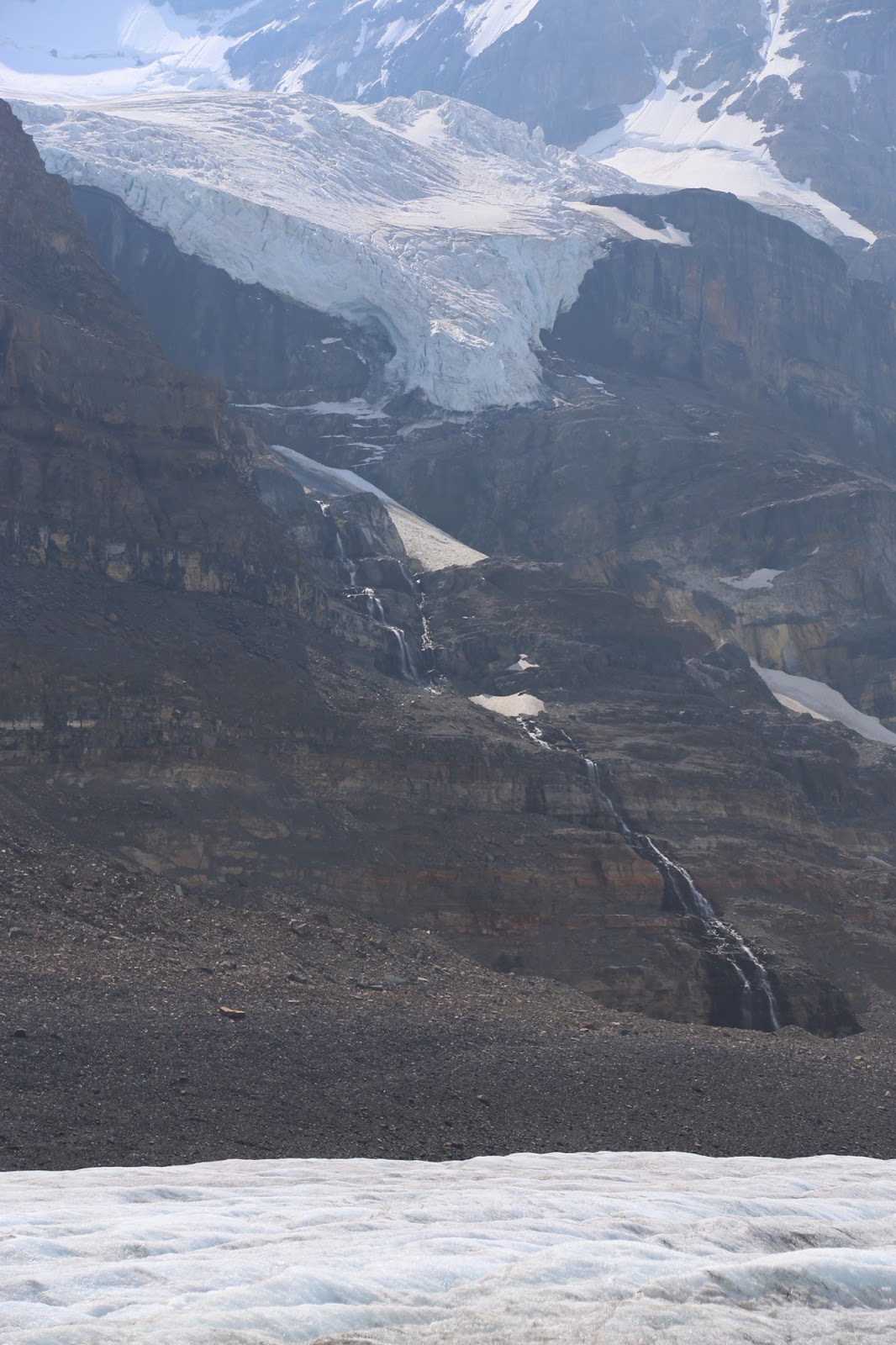 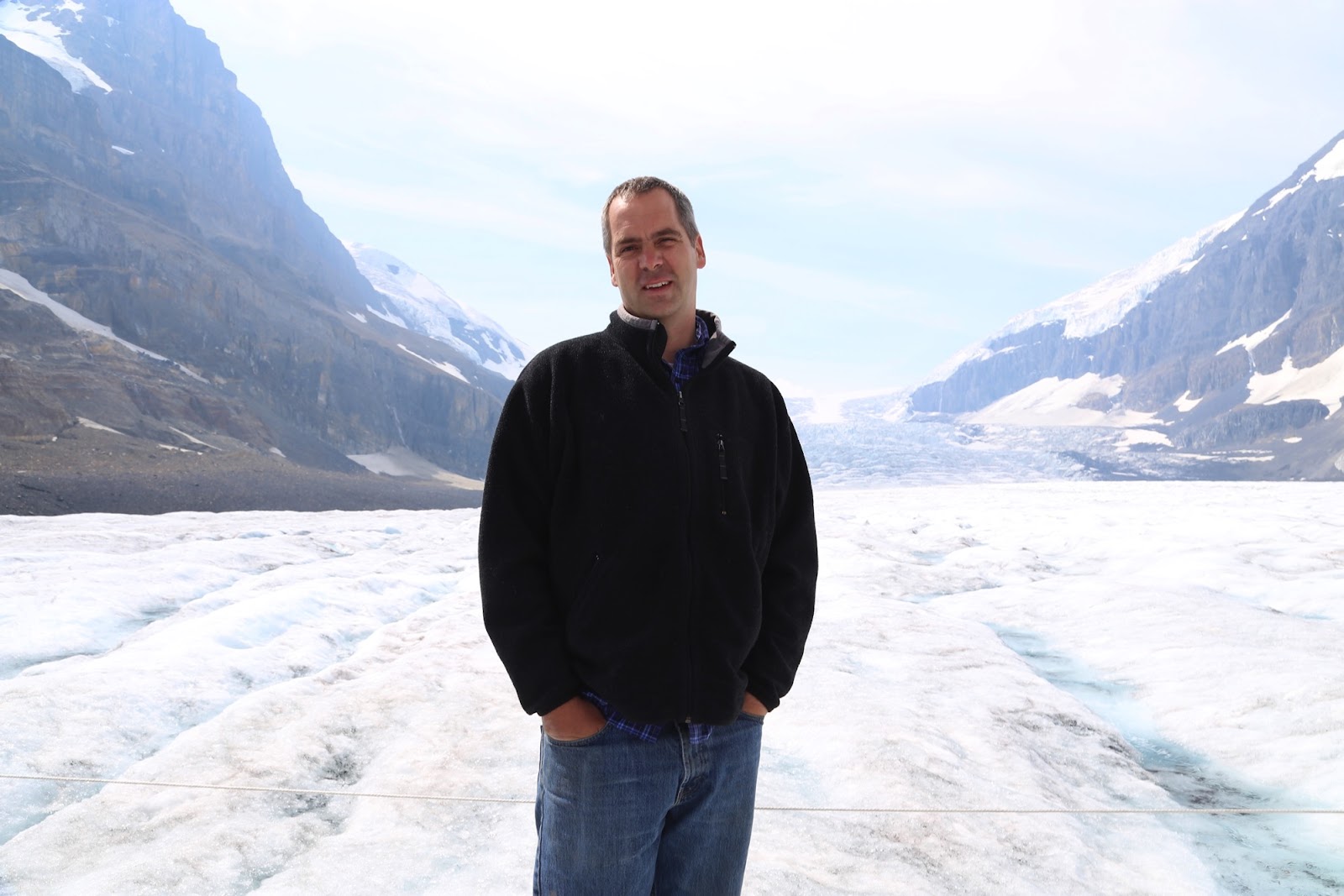 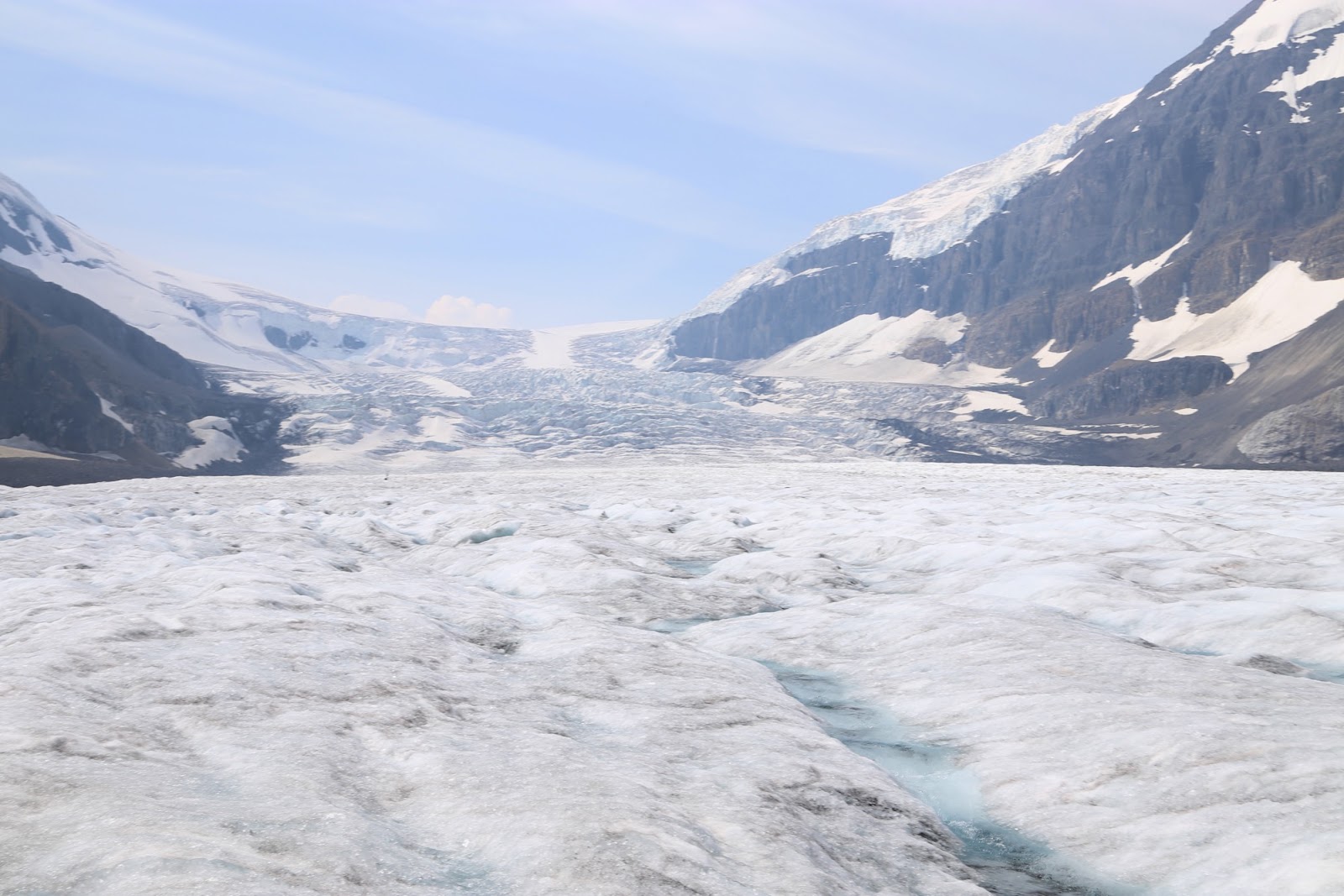 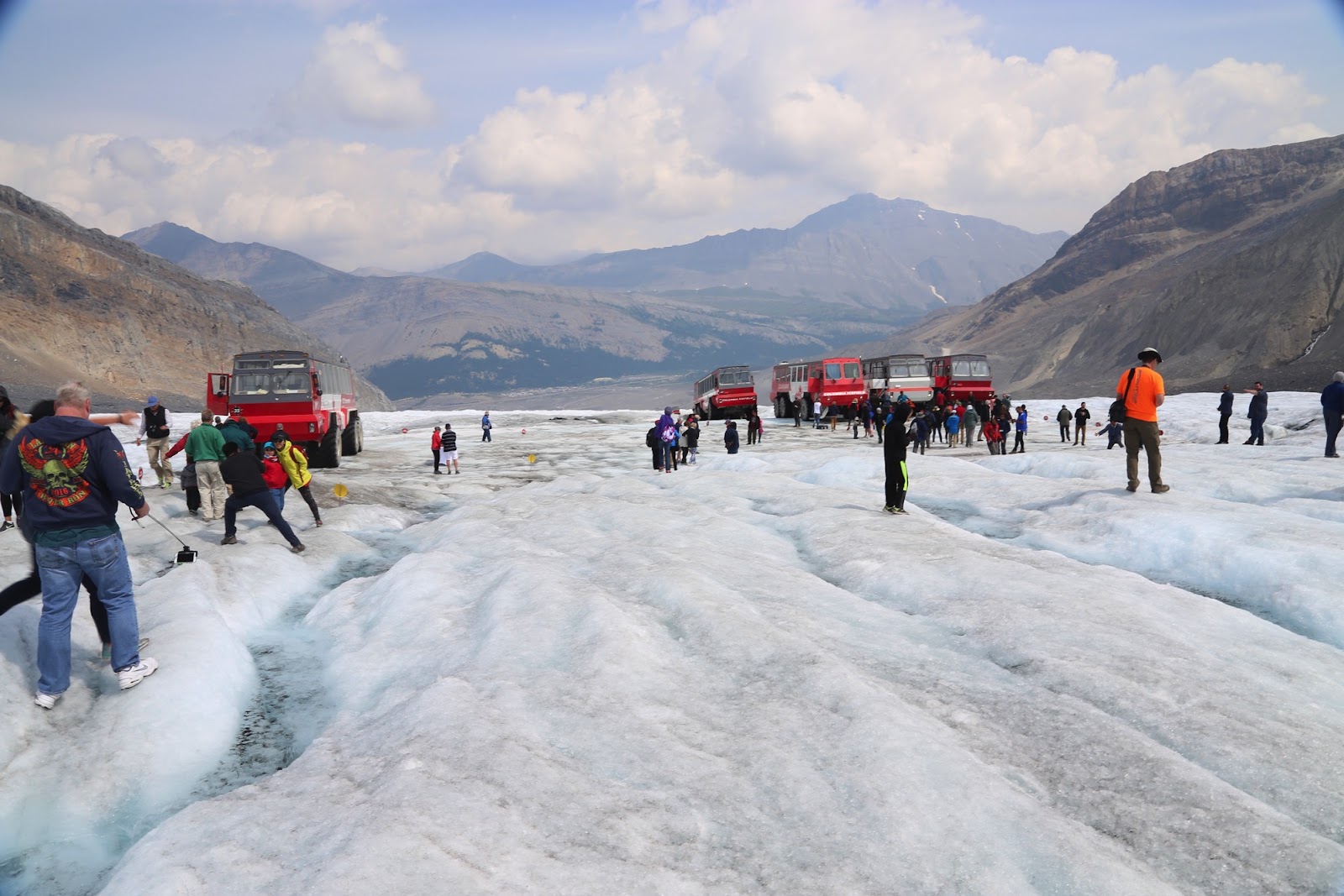 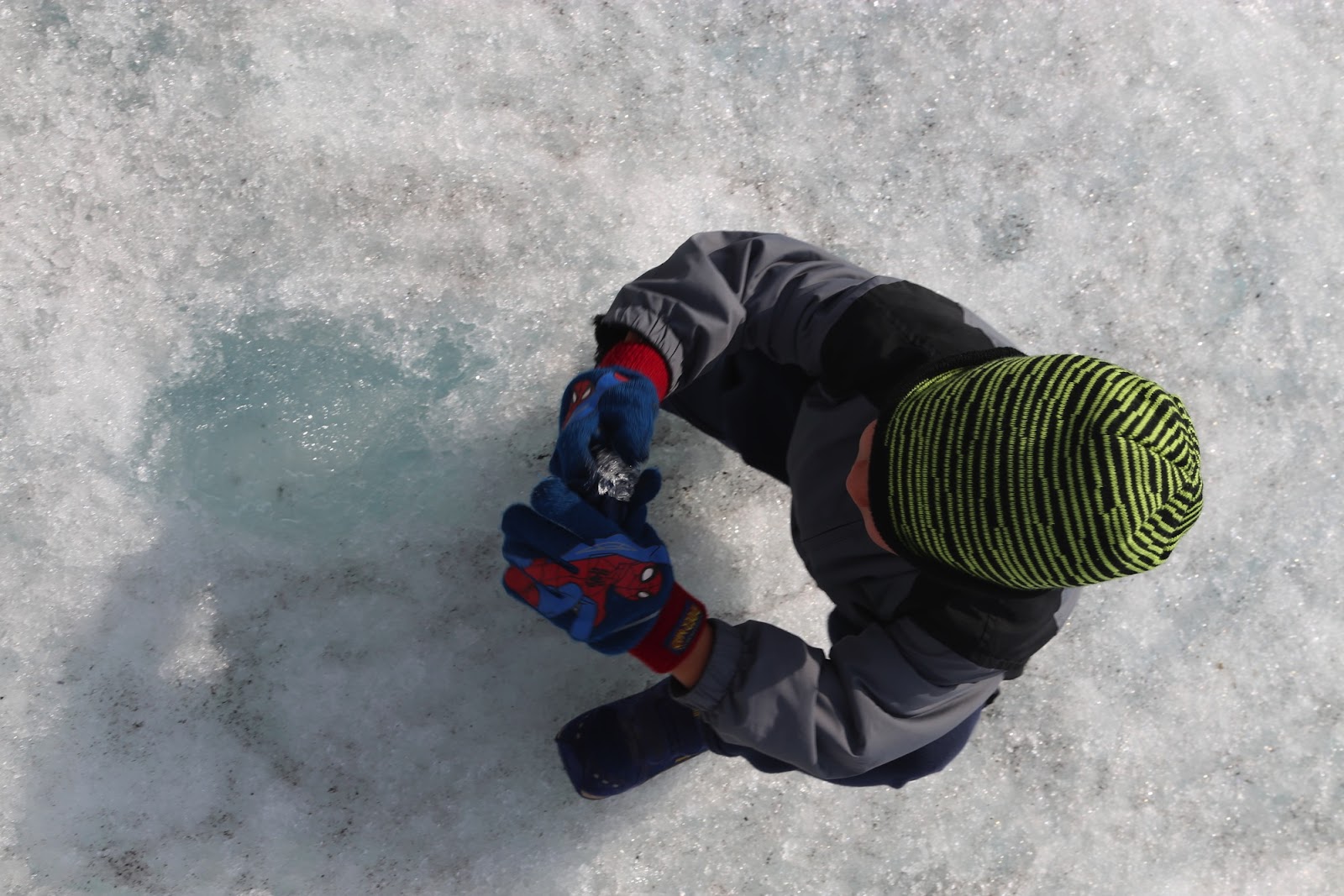 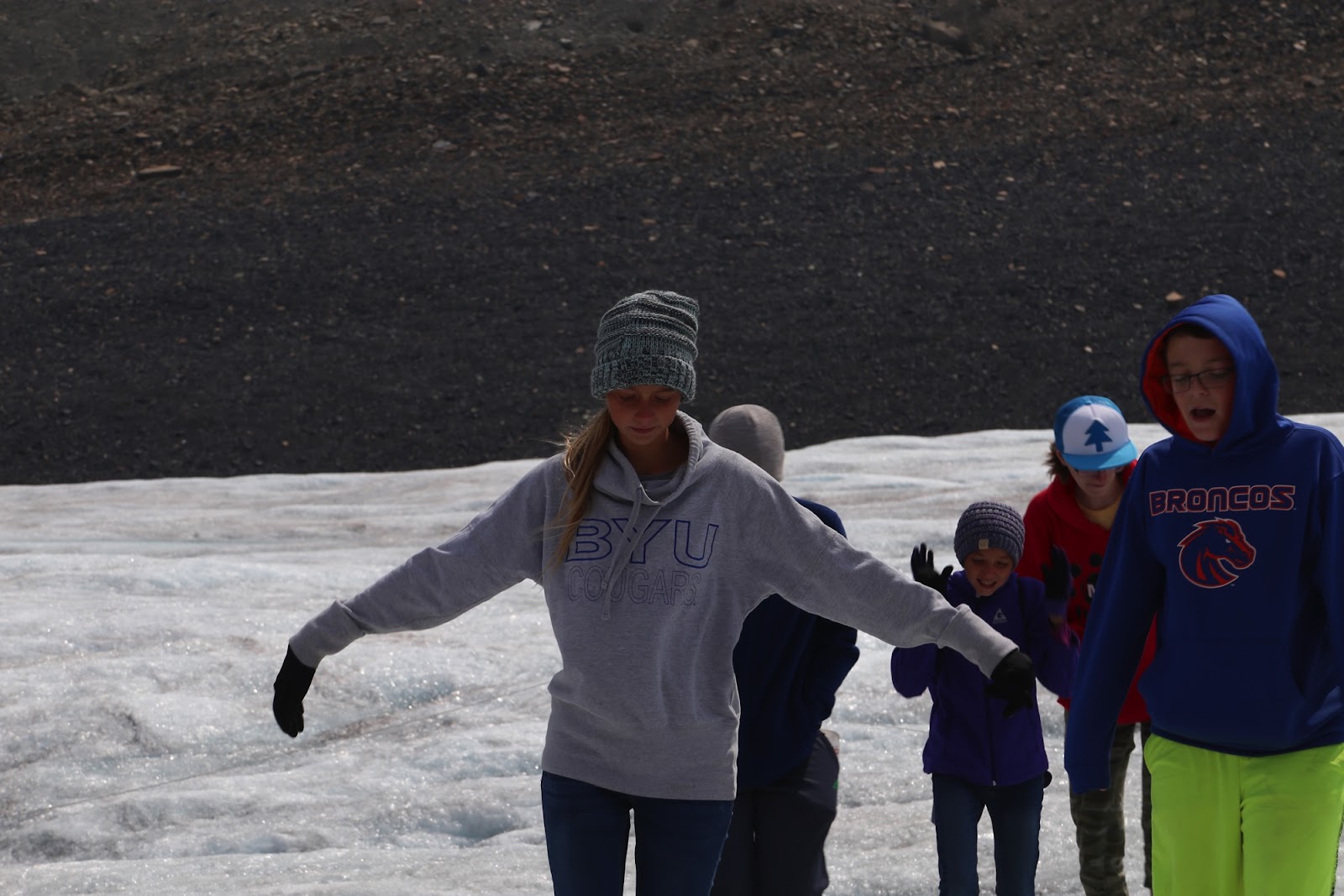 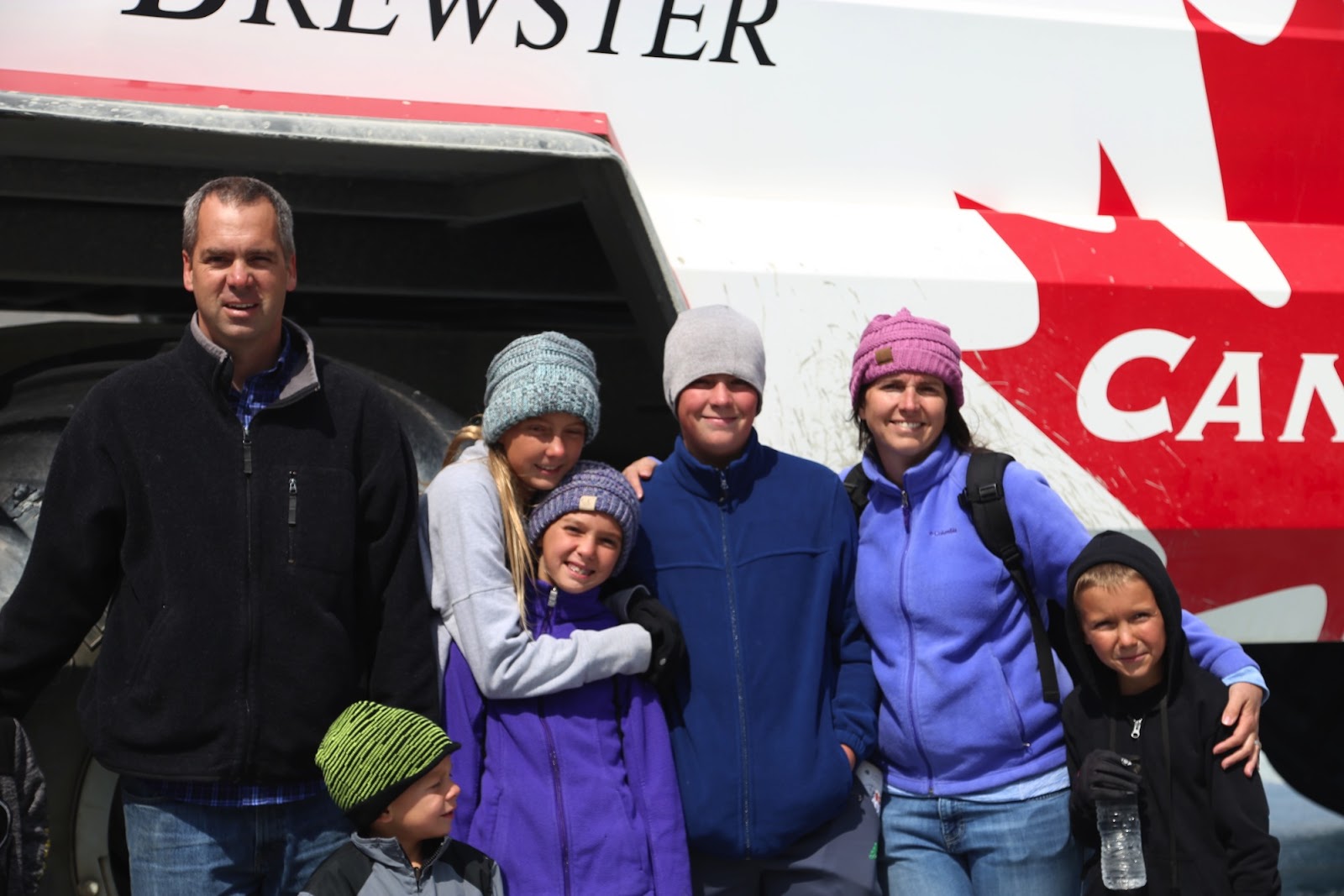 Back to town for the afternoon, where we gathered our laundry and did a few quick loads. We headed to the park visitor center while and picked up the kids Jasper dog tags for the kids explorer program, and why not grab some ice cream since we were in town!
All set to begin our path to Alaska tomorrow, we met with the Despains for dinner that night. After it was time to say goodbye to our travel friends. Mostly it was a big goodbye to Mirelle, as she will be off to college before we return from Alaska!
Posted by The Blood Family