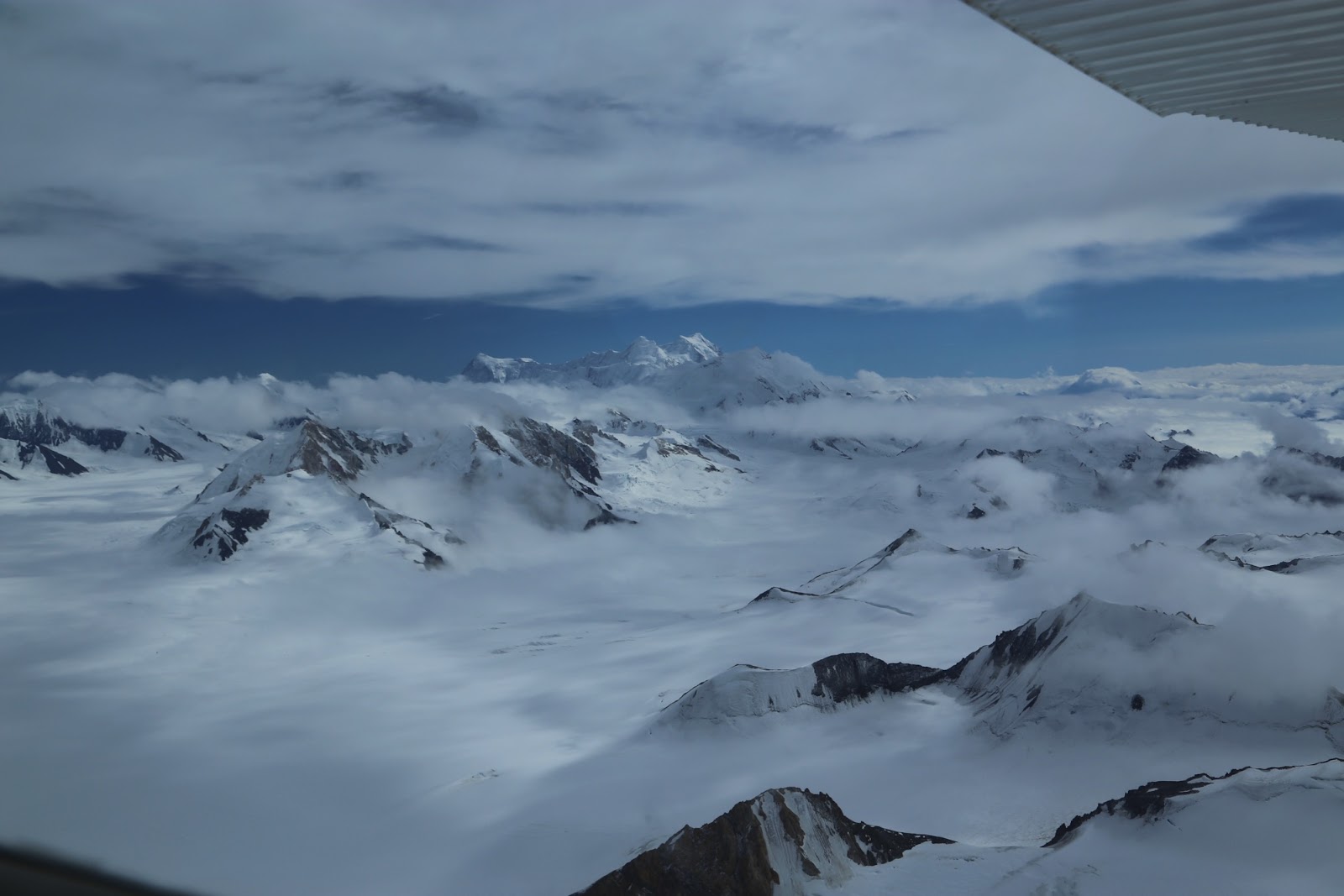 We weren't in a hurry to leave Denali, so we took our time packing up and stopped to dump the trailer tanks and refill on water. Since we had time, we cleaned up the van a little too. It needed it!

From Denali we drove up to Fairbanks, and took a slight detour to the north side of fairbanks to stop at a "visitor site" of the Alyeska Oil Pipeline. There were a couple of signs and displays of "pigs" that they put inside the pipeline to monitor. There was some info about how and when it was built. It was an interesting stop but it left us wishing there was more info offered. We'd seen the pipeline bridges over rivers before but didn't know thats what it was. Now we know. The pipeline runs from the North of Alaska, all the way to an ice free harbor in the south, where it is then shipped. 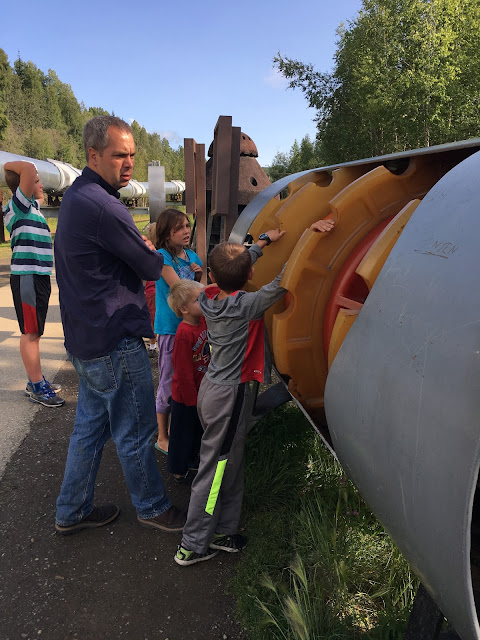 From here we drove through The North Pole, Alaska. Off the highway we could see candy cane street lights and business signs. It looks like they try to live up to the towns name.

As we head towards Tok we were hoping this road would be better than the one we took from Tok towards anchorage. We were grateful to find that it was. It was raining so a good day to drive. We stopped for the night just a few miles outside of Tok at a state park for the night. It was along a river that was clearly flooding from the rain. The kids thought it was funny to see a picnic table and campsite nearly under water. We found one that was not drowning in water to sleep for the night.
The next day we were up and going early. We had several hours ahead of us of frost heaves and gravel roads under construction. We arrived at the Canadian Border a few hours later, where they wanted to see each of our children through the window. They were a little more questioning then when we crossed from Montana into Alberta.

And a few hours after that, and now with a completely dirty car, we arrived in Burwash Landing where we had booked an afternoon flight into Kluane National Park. We set the trailer up in a little clearing near the airport, and turned a movie on for the kids. 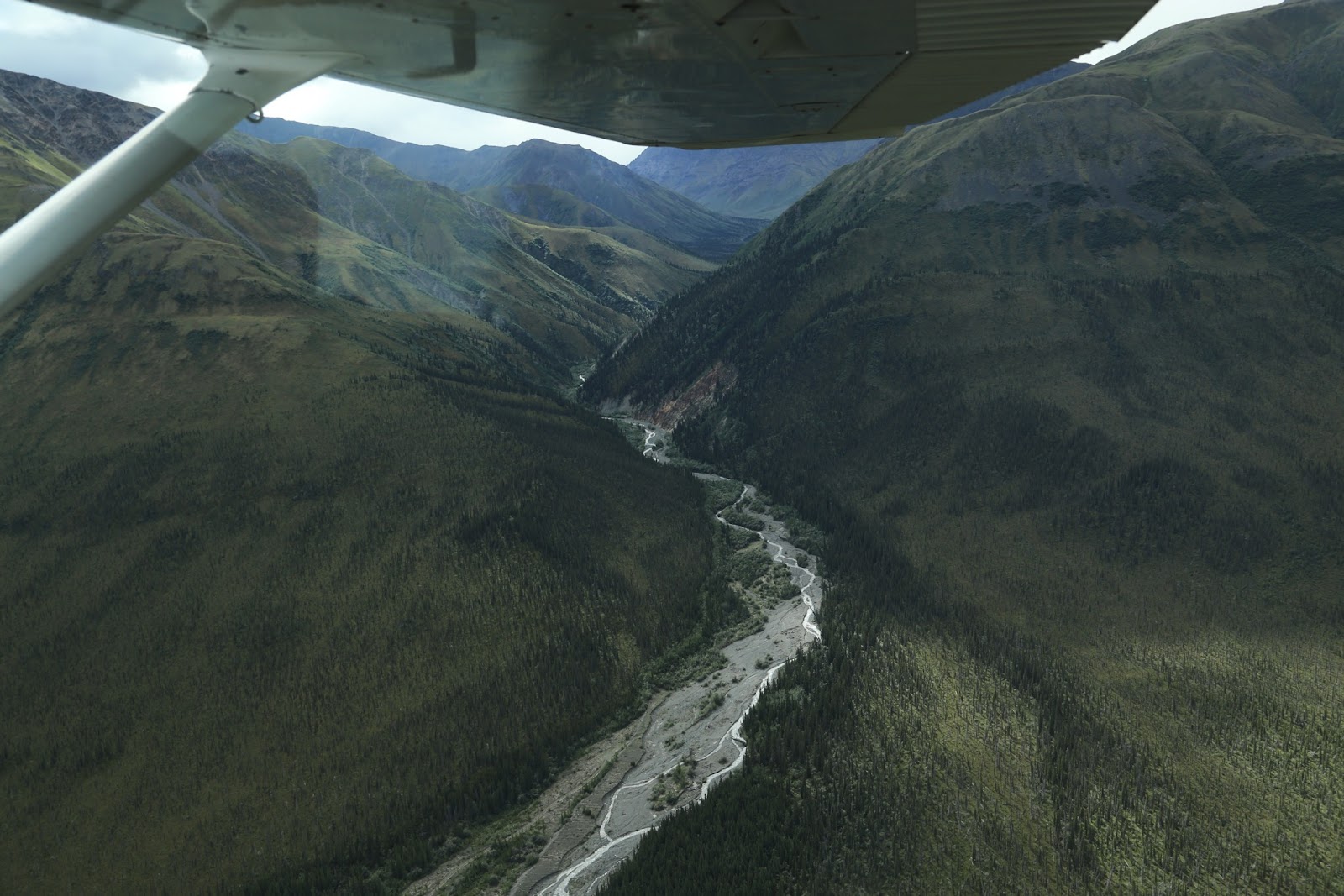 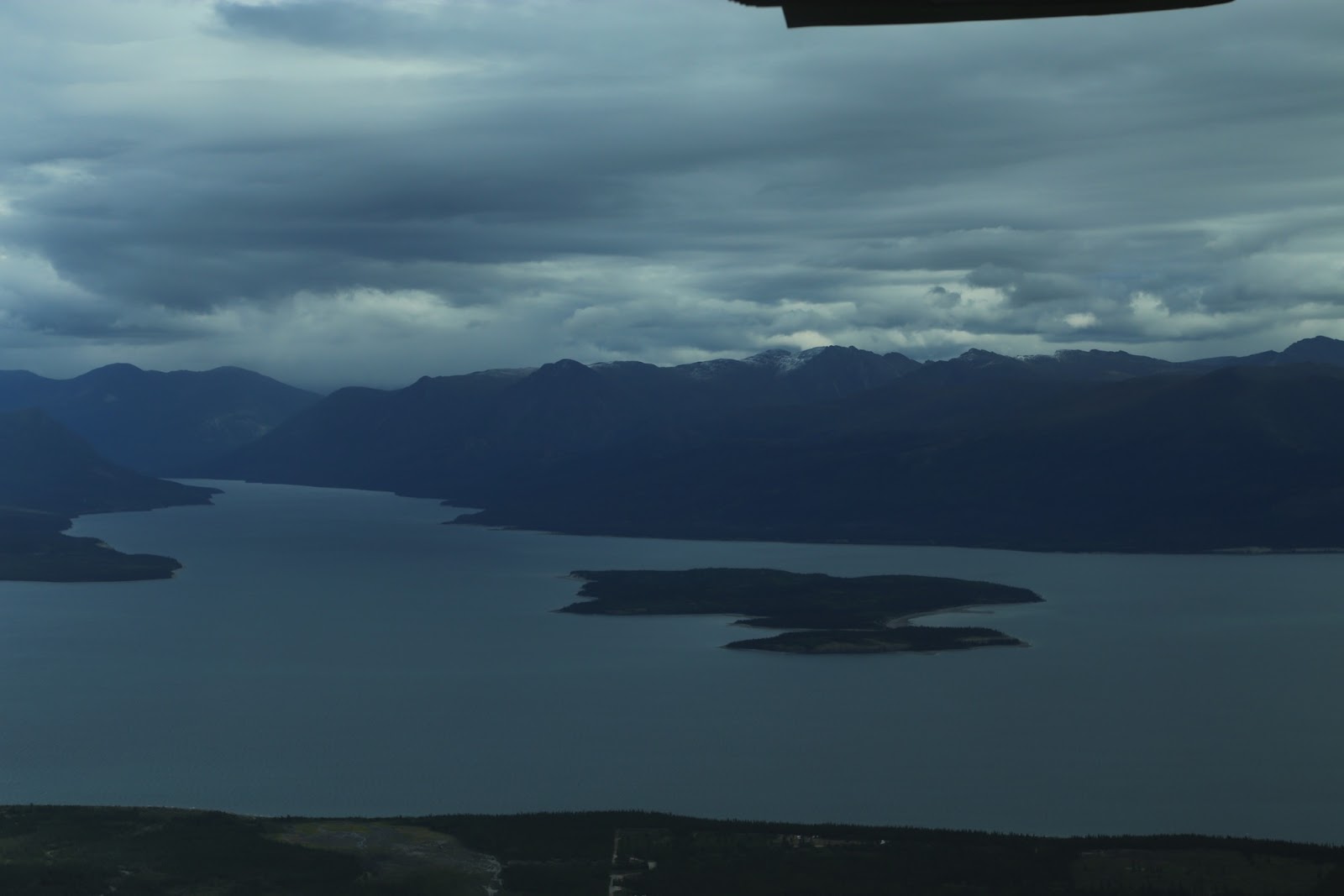 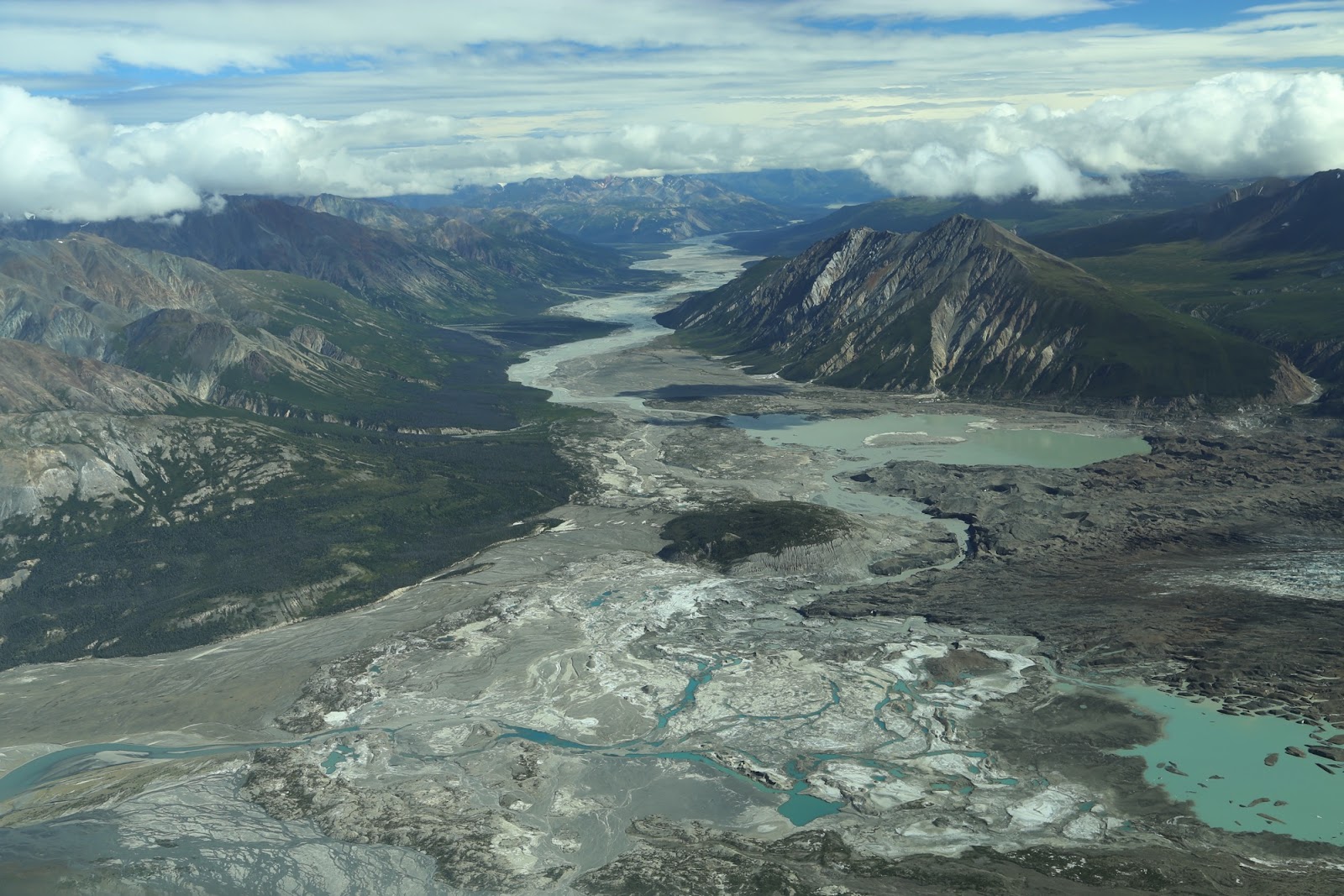 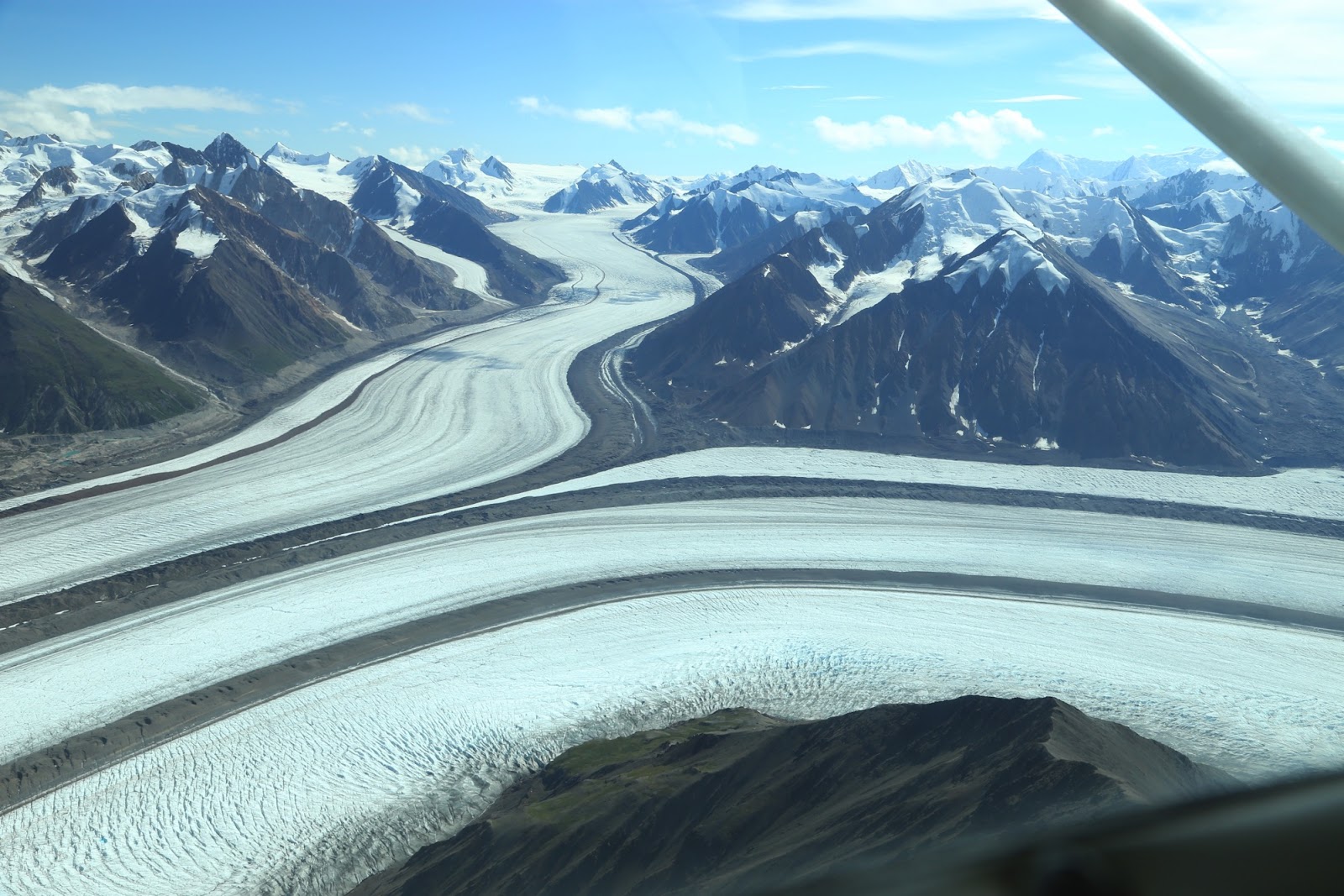 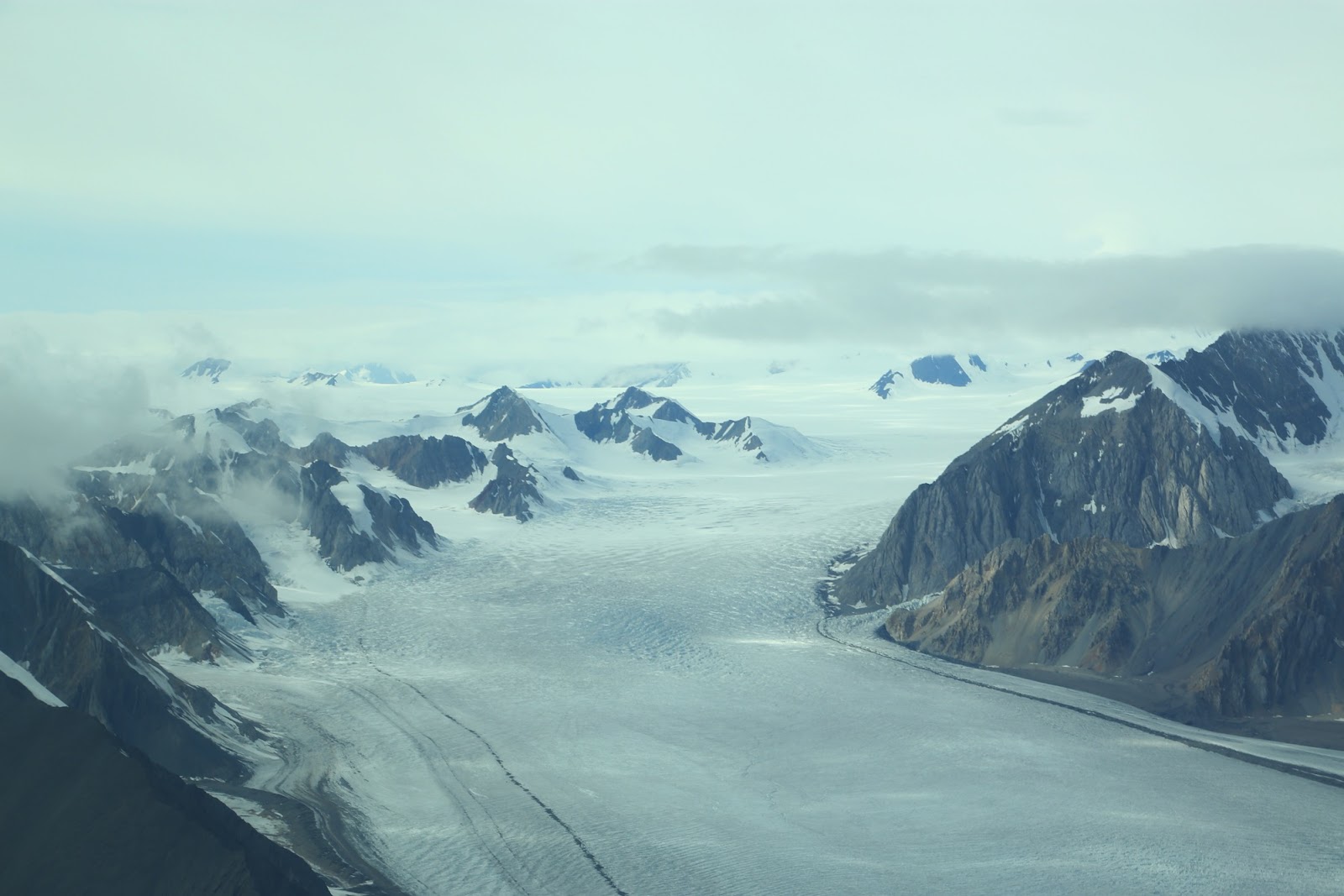 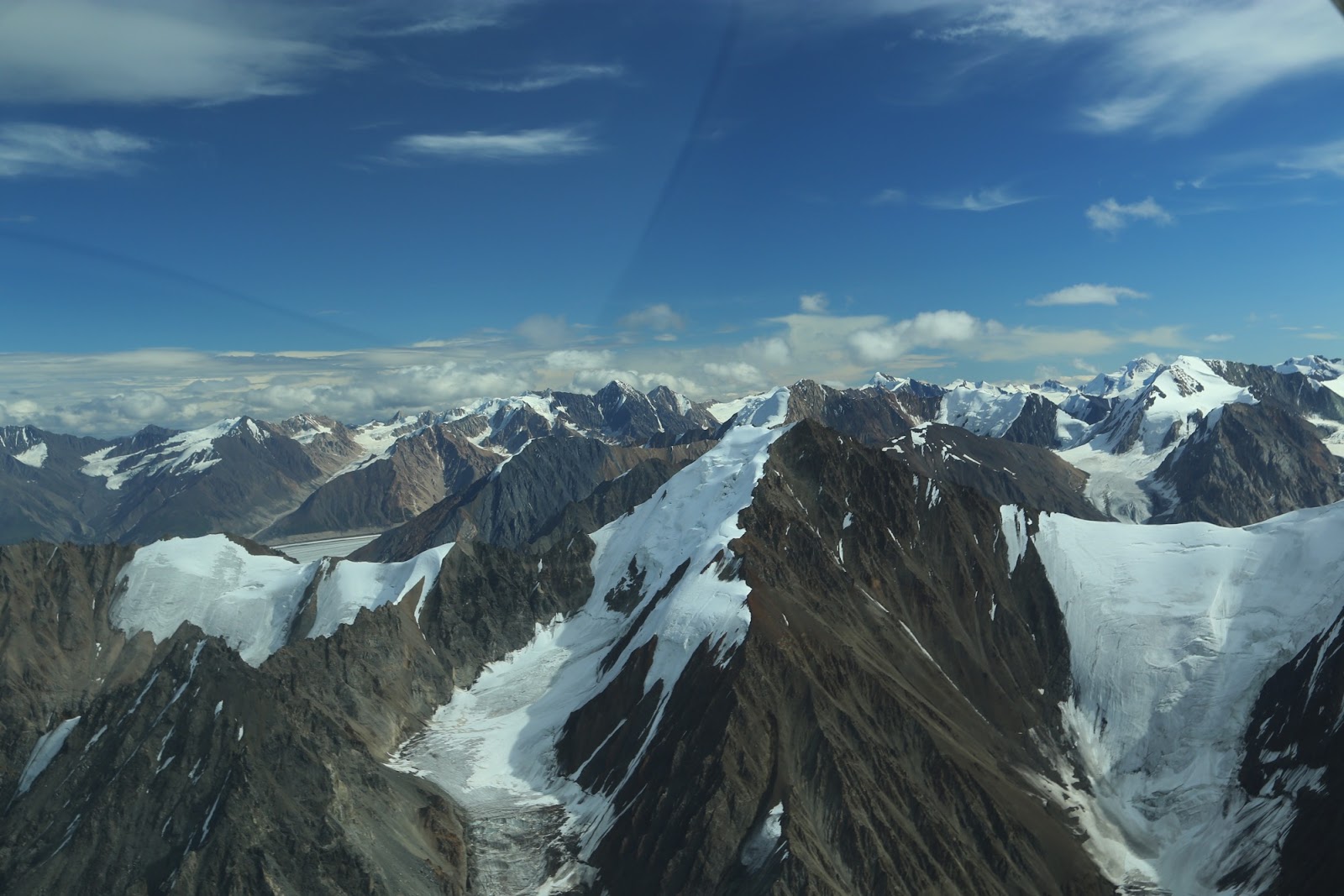 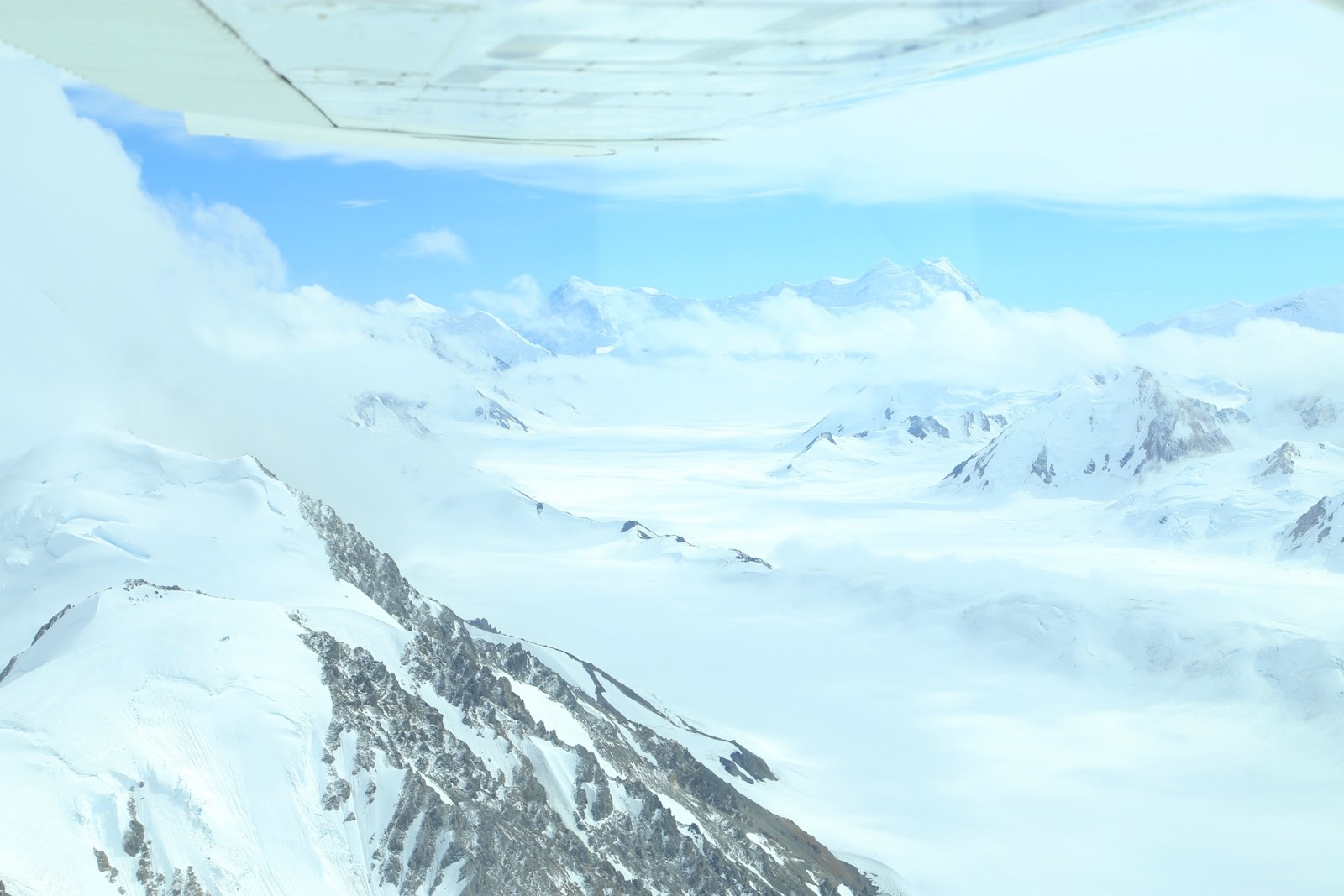 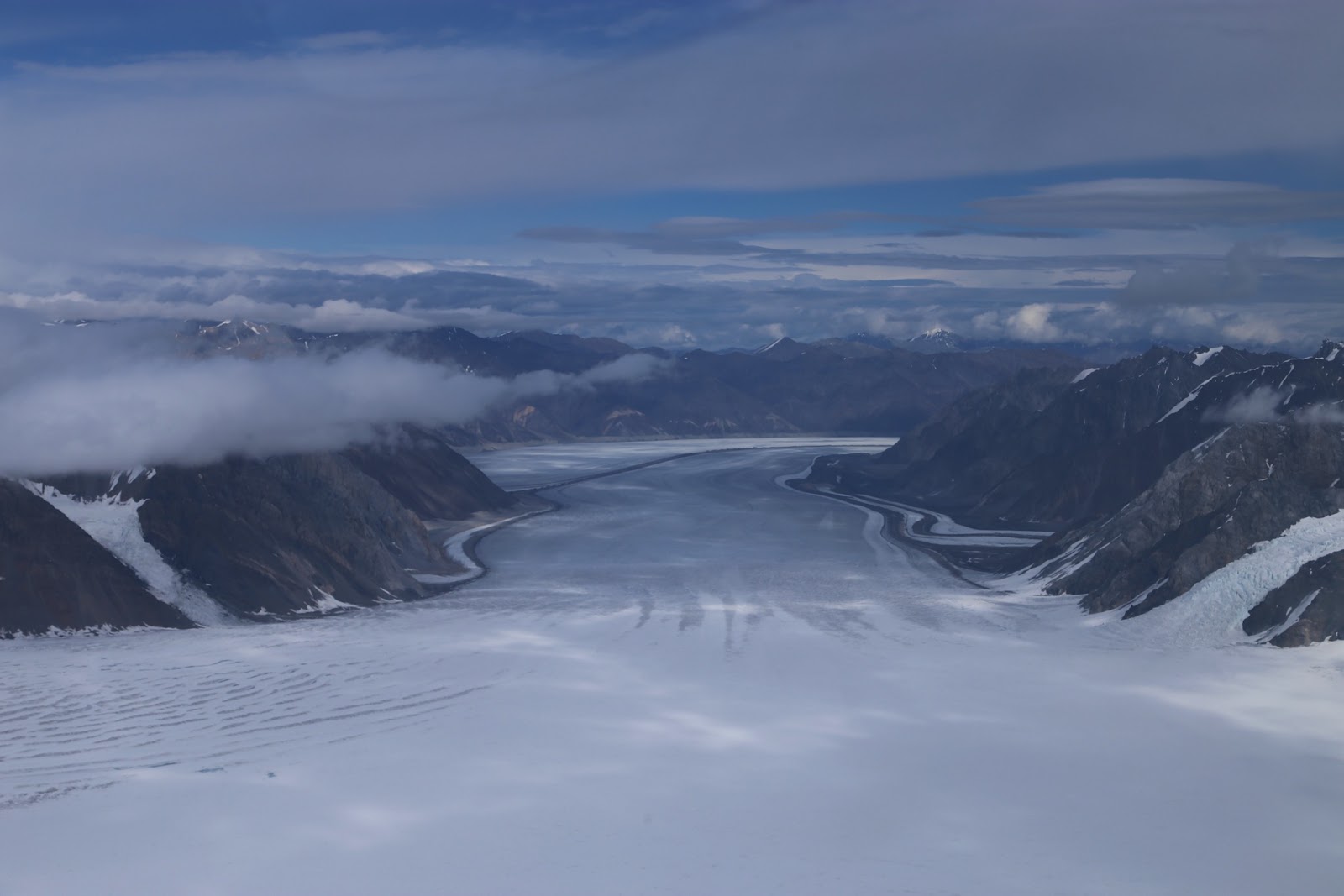 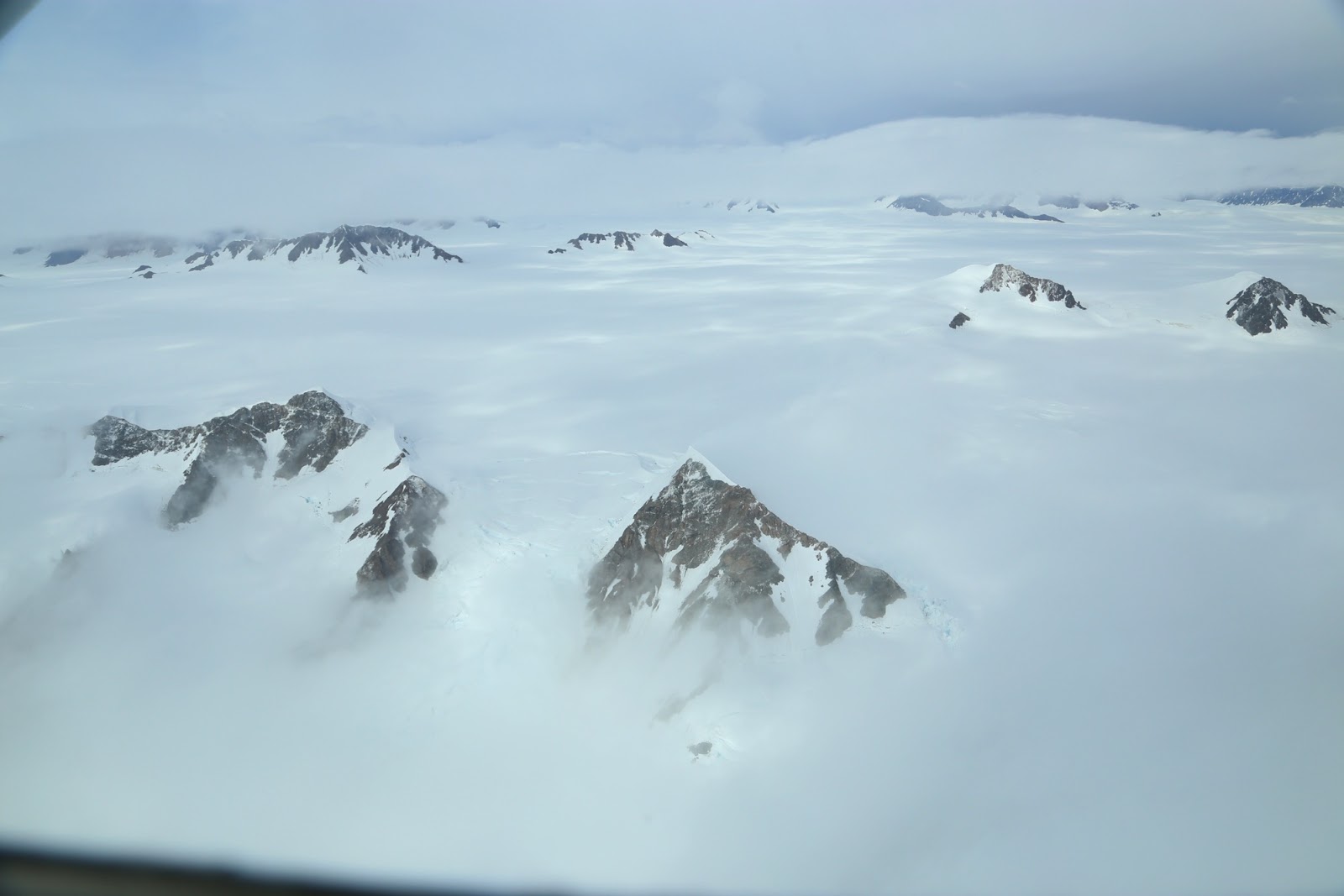 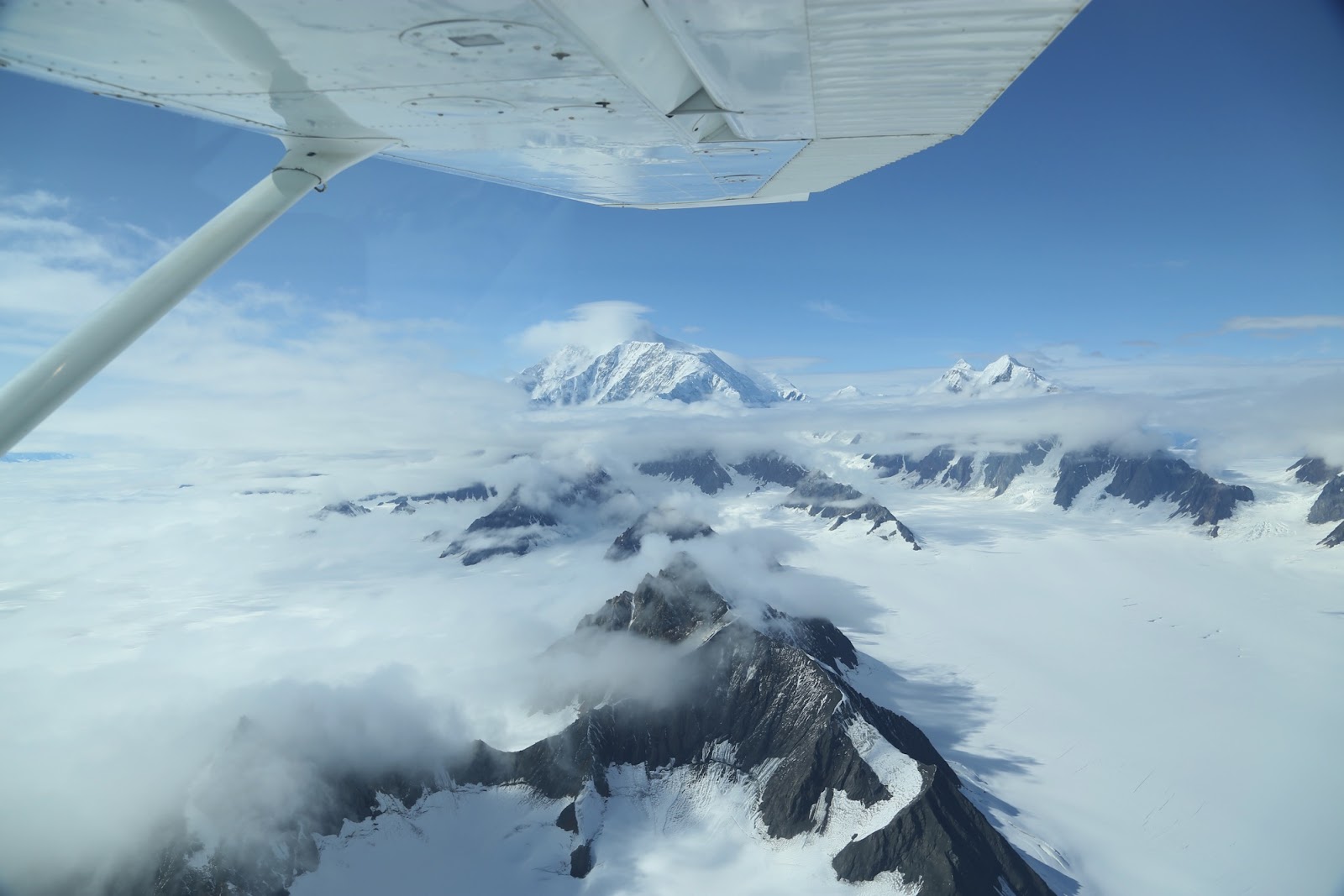 This was the smallest plane I have ever been in. There were seatbelt for 4, this included the pilot. And I'm pretty sure the seatbelt would be useless. But I put on the lap belt anyway. And off we went, into the mountains and clouds.

It was beautiful. The glaciers are amazing, and you could see how massive and long they are. They run for miles. They sometimes merge and come out of multiple valleys to create once massive glacier running through a large valley. And the ice field is amazing to see. It gave us perspective as to how this was all happening. Being above the ice field and seeing the tops of the mountains sticking out of the snow, and understanding how the valleys between all these peaks are covered in ice packed snow. It was awesome! David loved it and said he is now rethinking the pilots licensing thing again. 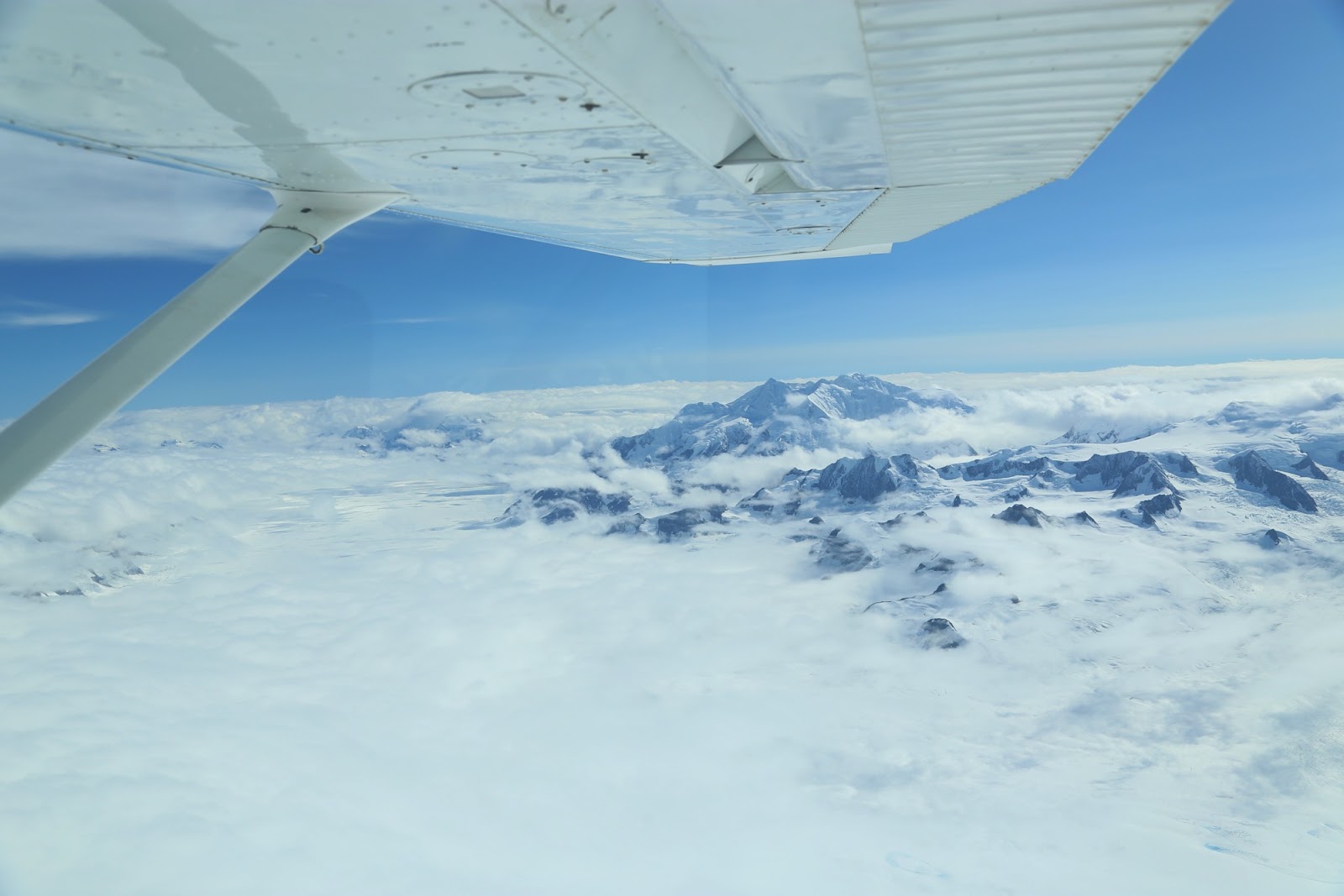 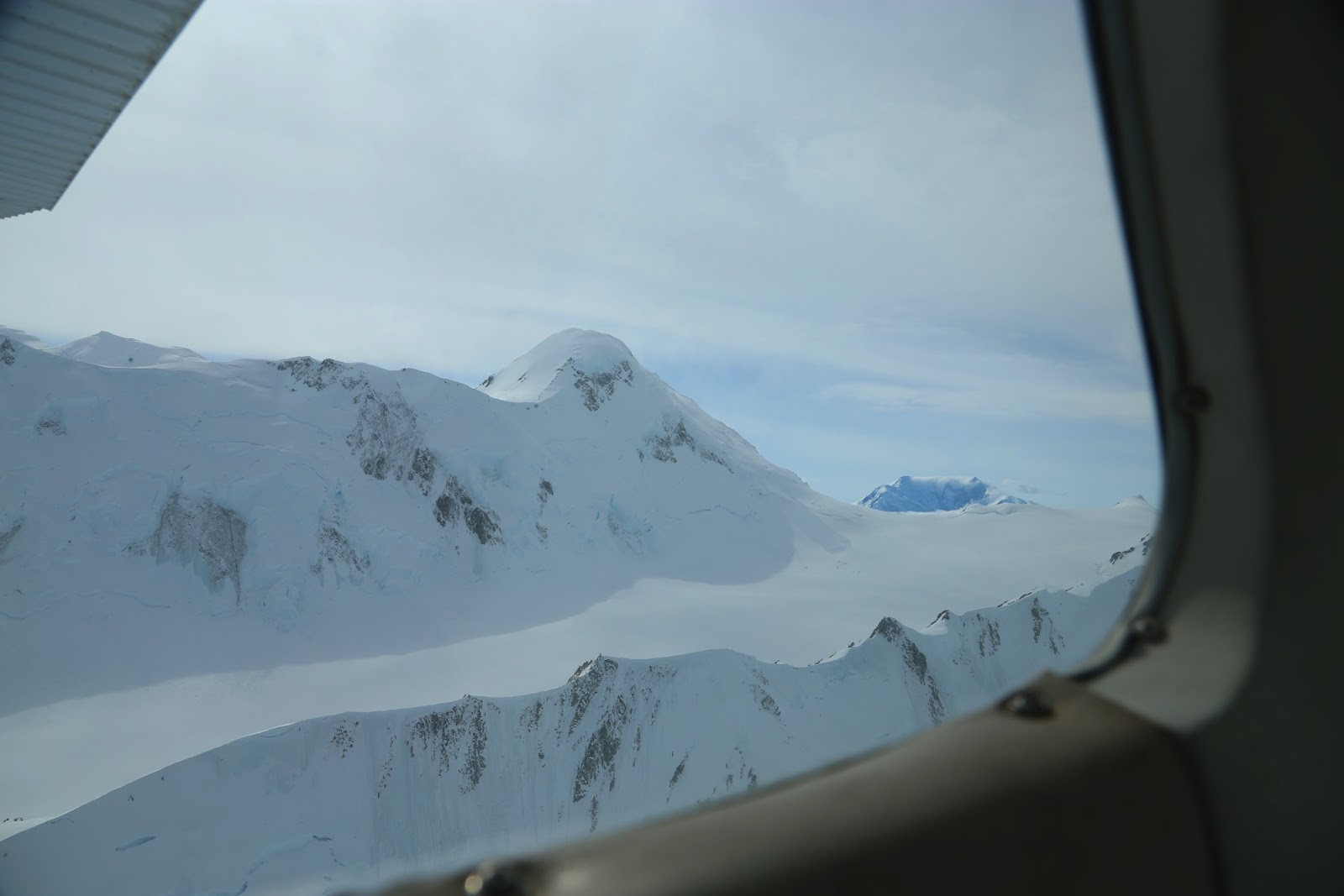 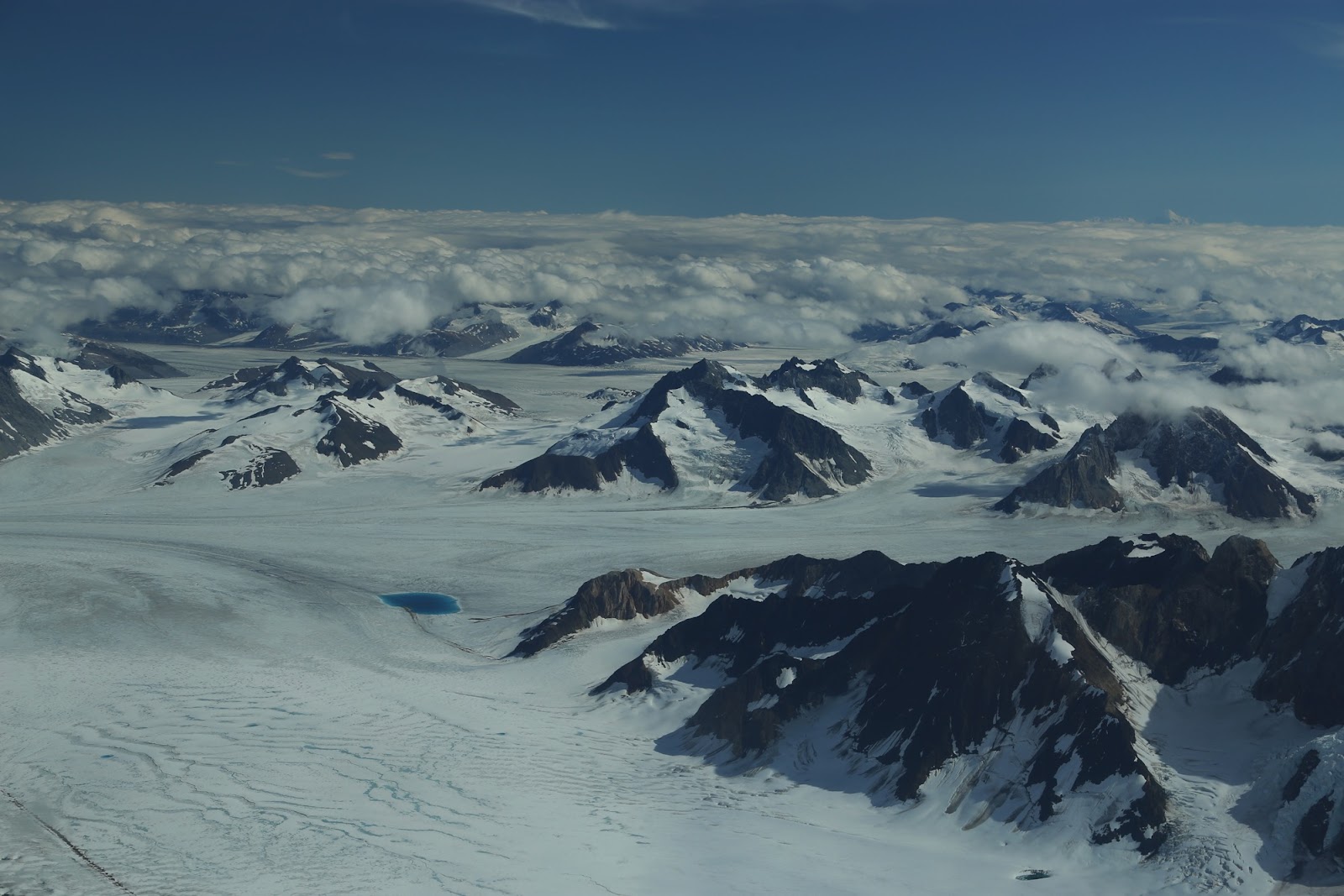 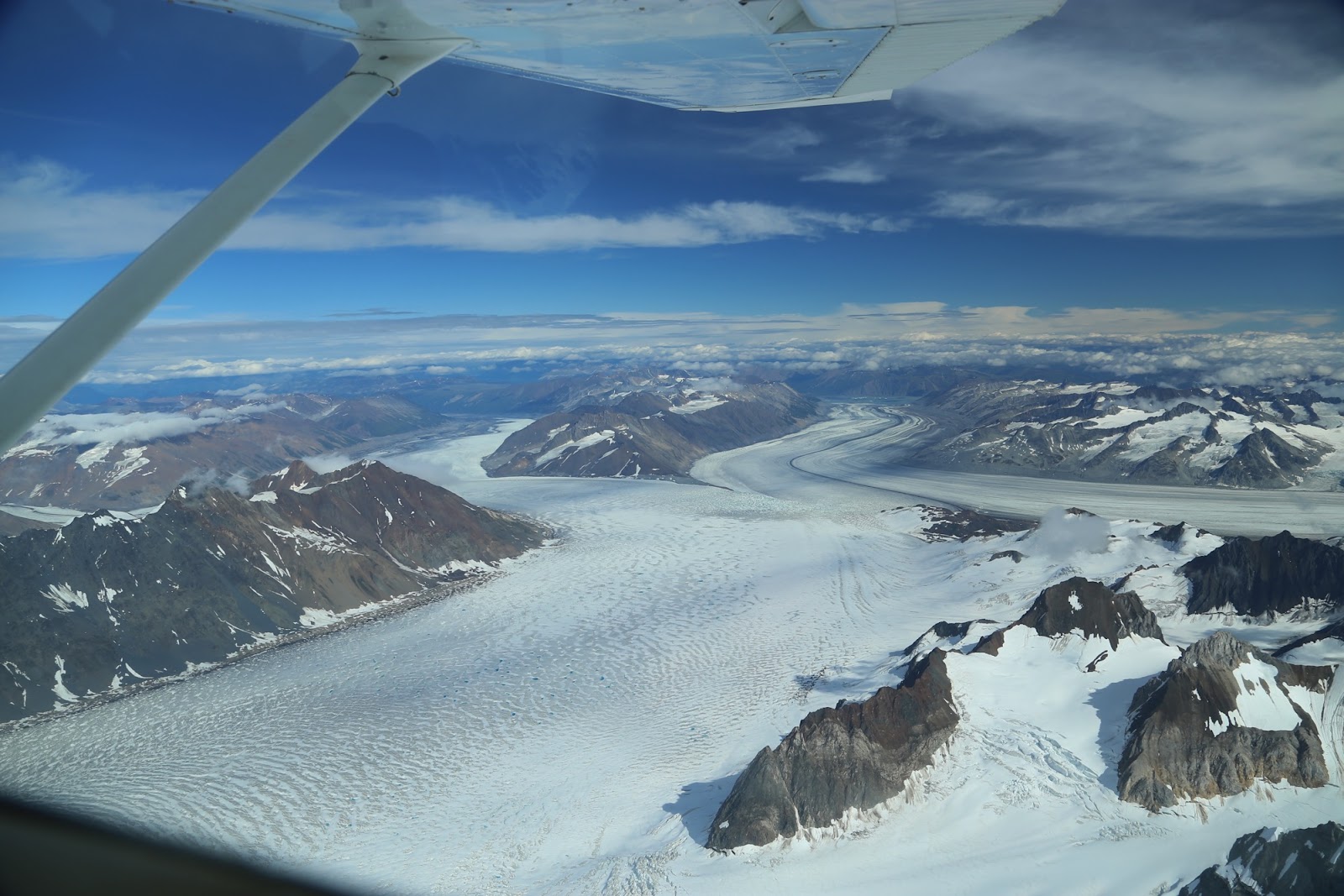 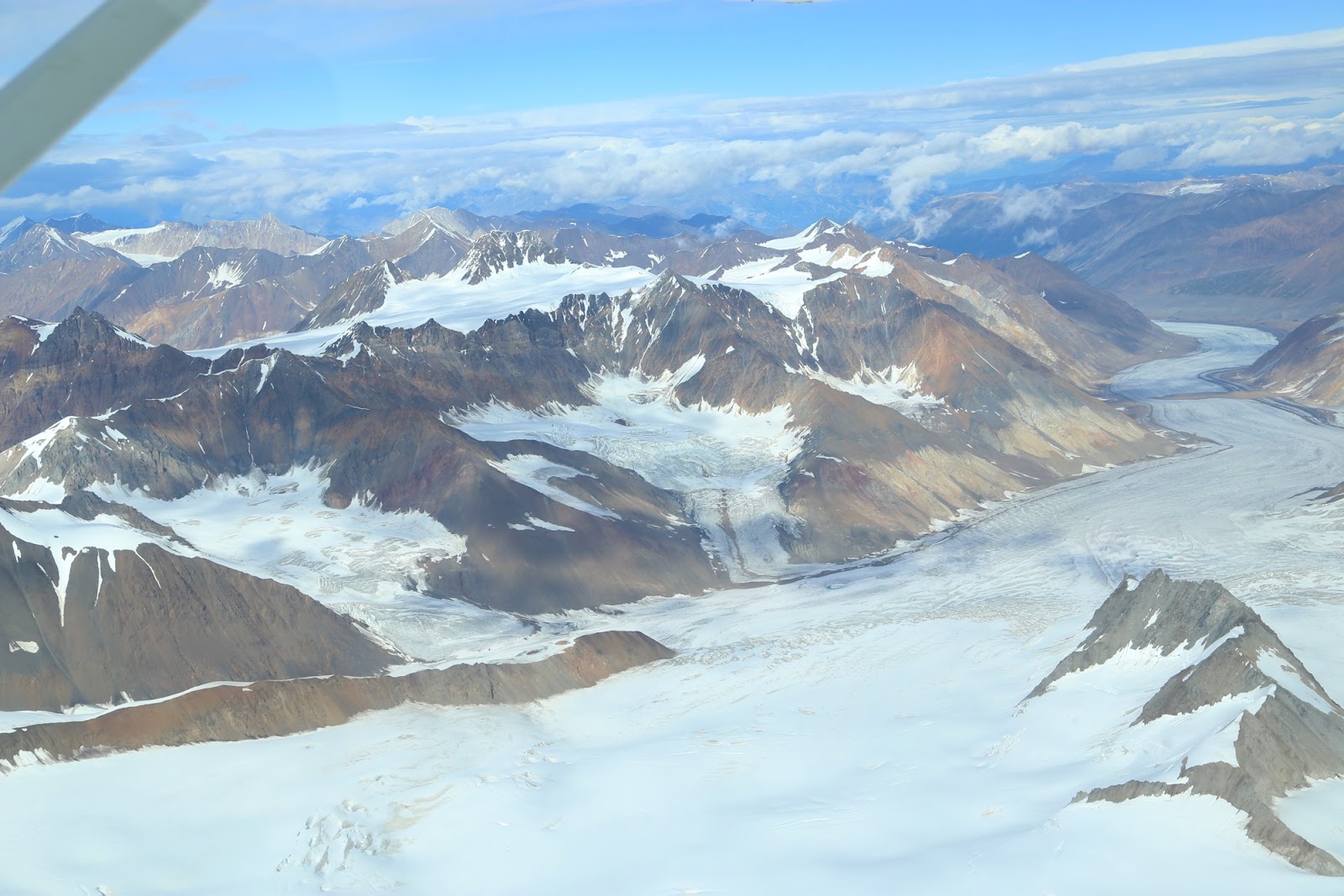 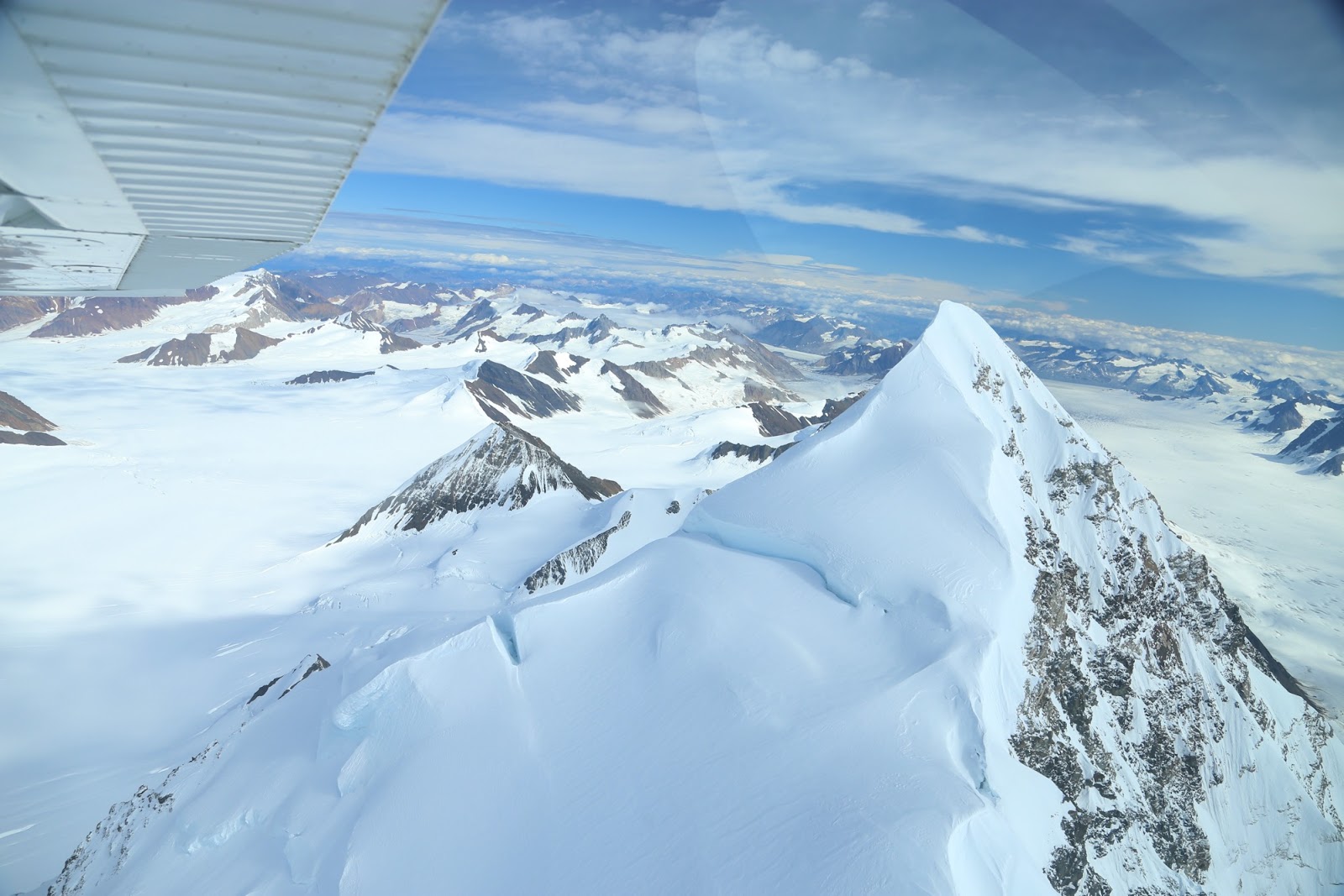 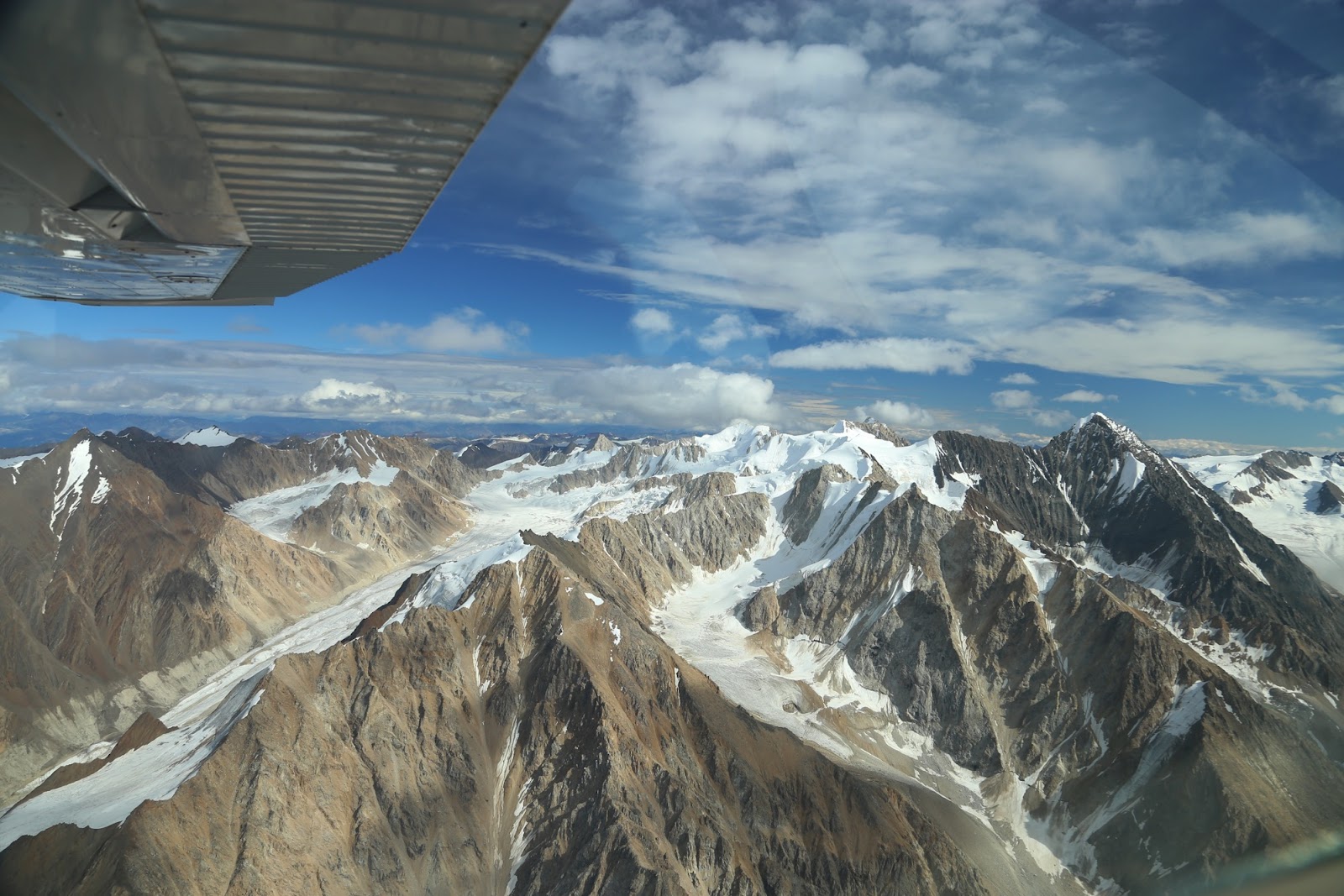 After our 2 hour flight, we picked up the trailer and headed south another hour to stop in Haines Junction for Dinner at a local diner there, Frosty's. Burgers and fries, and it was just okay. 20 minutes down the road we arrived at our campsite along Kathleen lake. We found a campsite and got set up quickly. We arrived in time to catch the end of the ranger's program. The Park Ranger is a native, and in Canada they call that First Nation. She shared some of the traditions and culture of the First Nation in the area.

The kids were thrilled to have a campfire that night. They were counting down nights we were in the Yukon, knowing that when we reach BC, there would be no more fires as they have a fire ban in effect because of forest fires in south east BC.

This was by far the coldest night of the trip. It was cold! And not long after we went to bed, the propane went out... not more heater. I was glad I had put on warm pjs that night. We all slept well, but no one wanted to get out of their warm bed in the morning. Finally David got up to check to see if we were really out of propane, and then Isabel braved the cold to run up to the bathrooms. She hopped outside and declared, "oh! the sun feels so good! It's a refrigerator in the trailer." She was right, it was much colder in the trailer than outside at that time in the morning. We started a morning fire and heated up water for hot chocolate. We turned on the generator and ran the electric oven to bake cinnamon rolls for breakfast.

Then we headed down the trail to the Lake. Isabel, Benjamin, and Matthew did an Explorer book challenge to see who could keep their feet in the lake water the longest. It is COLD glacier water. It was a tie, they all hung in there until they all agreed for it to be a tie. We walked along a short trail on the lake edge, around the point and then enjoyed the view of this glacier carved lake. 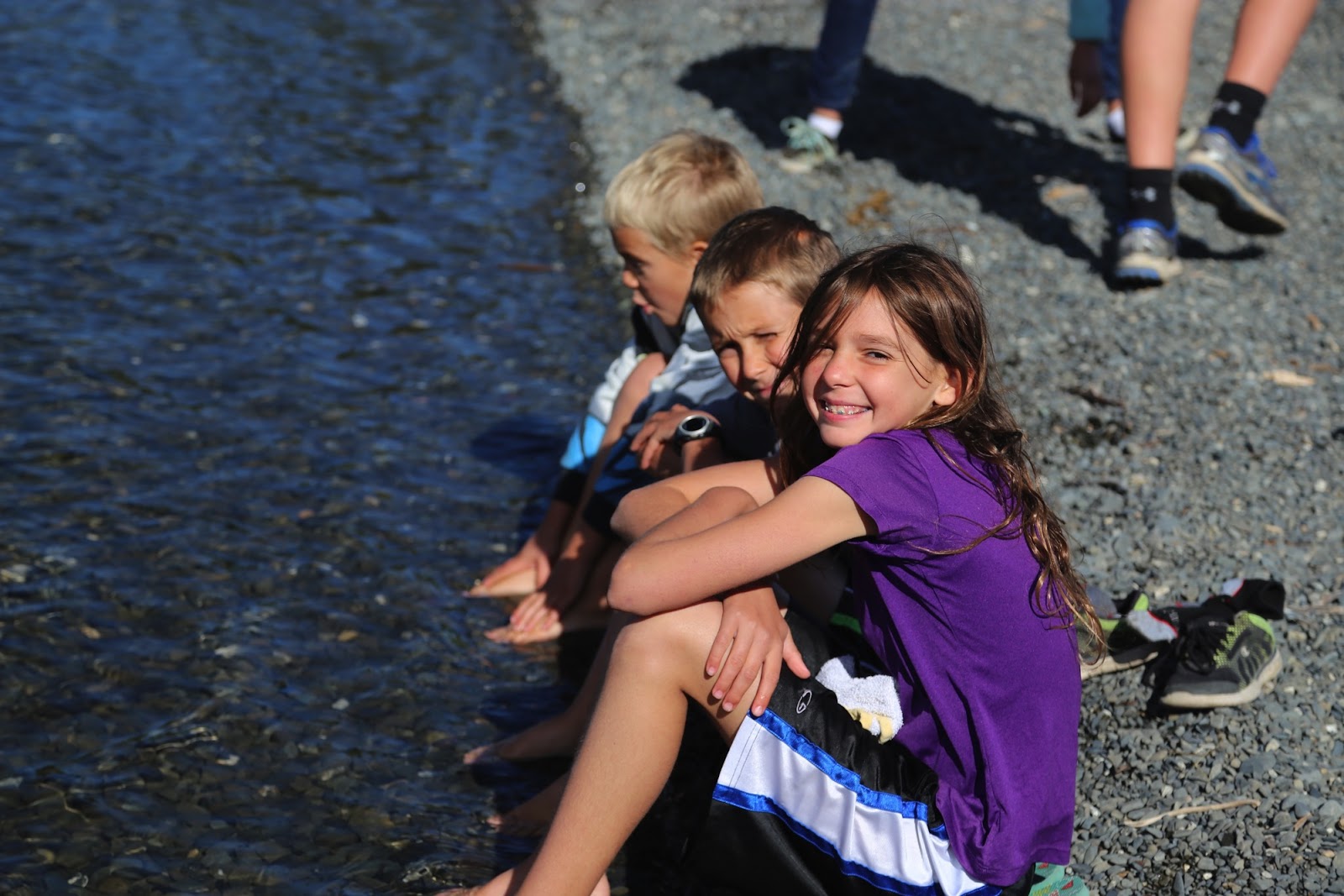 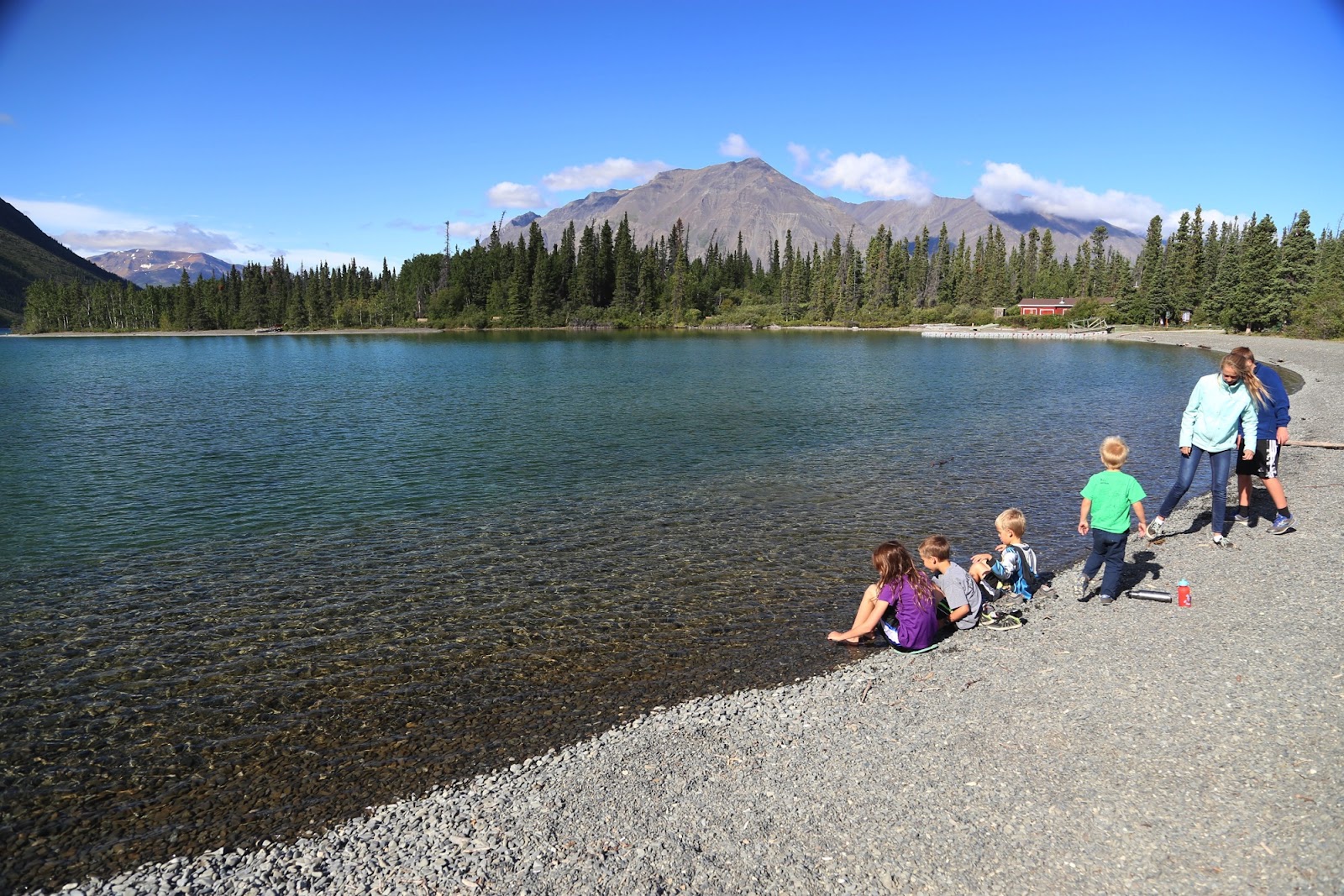 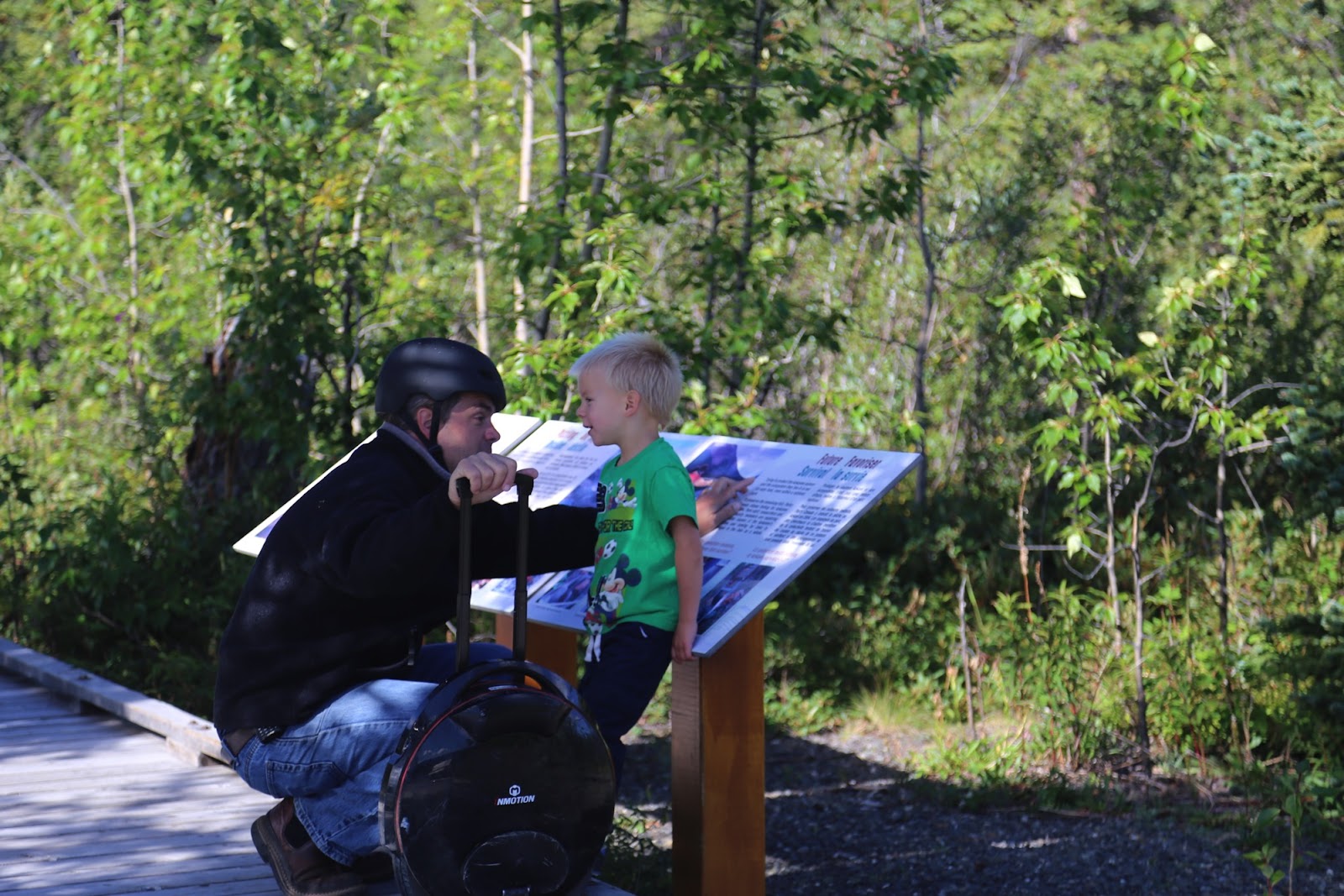 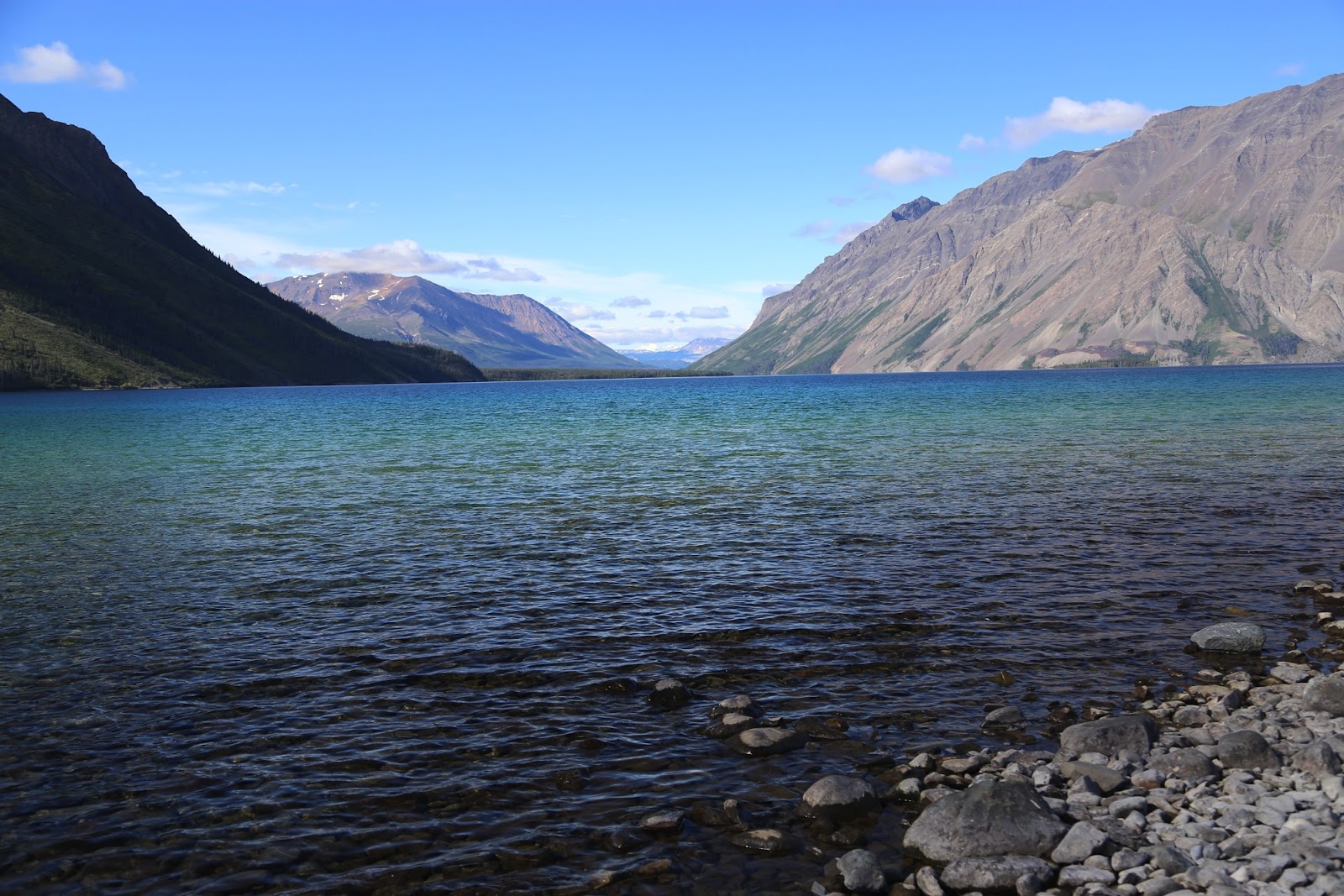 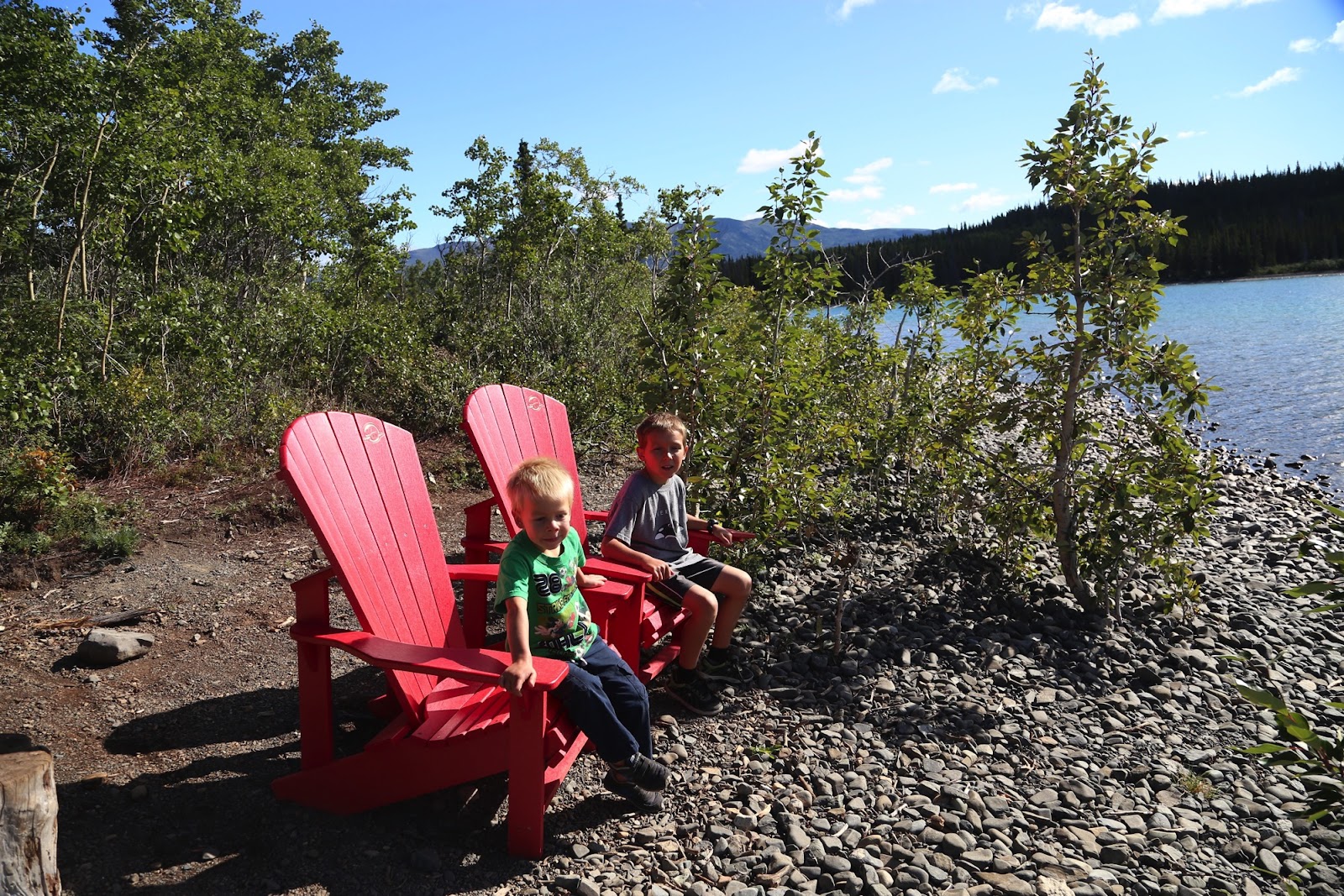 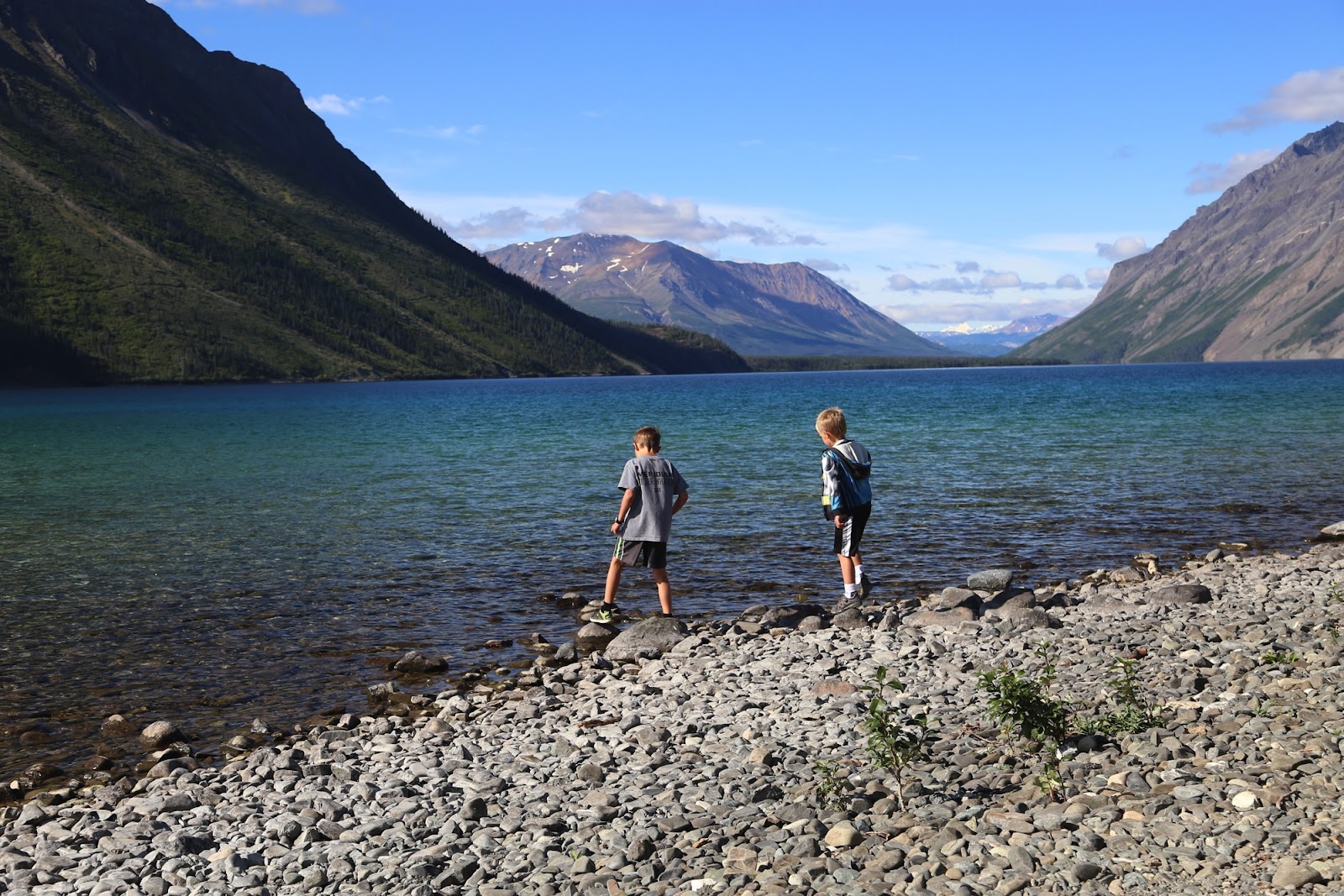 After heading back to the trailer, we packed up to head on that afternoon, getting closer to home. We stopped by the Visitor Center in Haines Junction for the kids to turn in there Explorer books and pick up their last park dog tag. We had lunch on a picnic table in the sun, while Savannah tried to use the wifi to access her Math work, and I caught up on some bookkeeping work myself. It was a productive stop in light of the lack of cell phone service we've had.

From here we headed a couple hours down the road to Whitehorse, Yukon. The largest city in the Yukon to stop at a couple of stores. We were looking for a Canada shirt for Grandpa, and grandma's favorite Canadian cookies. Neither could be found in Whitehorse at the 2 stores we stopped. So it was time to drive just a little further on our path to look for a campground.

We stopped that night at the Teslin Lake Campground. We made dinner, enjoyed our last Campfire for the trip. 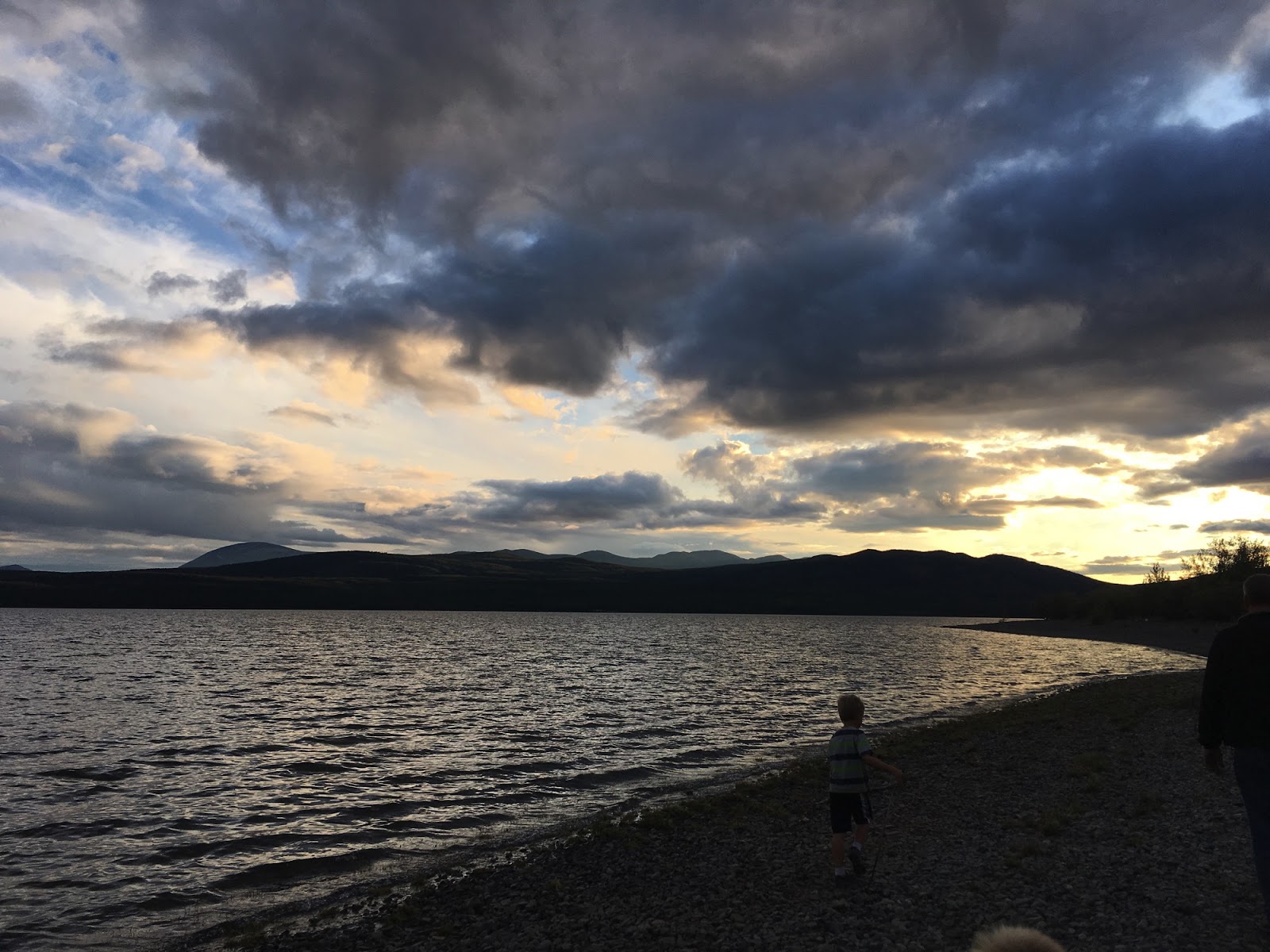 In the morning we woke up early to get an early start on a 12 hour drive. We left at 7:30am and got 1 minute down the road when David pulled over and said "Somethings wrong", and when I looked back in the mirror I could see smoke at the back of the trailer. And as we hopped out of the van, you could smell the burning rubber. We found the source. The tires on the trailer on the passenger side were rubbing each other causing the burning. The trailer suspension system had snapped and caused the tires to be out of place and next to each other. So we turned around, and very slowly drove the short distance back to the campground, but parked the trailer in the open rest area outside the campground. David further checked out the suspension leaf springs and confirmed they were broken, and on both sides. He made a few phone calls to see if he could find a shop that could fix them, and he found the parts in Whitehorse. We were so grateful we were broken down somewhere that had cell service, as we have rarely had cell service at our campgrounds. He decided he would try to remove the springs himself, then drive the 1.5 hours back to Whitehorse in the van to pick up the parts and then reinstall himself. We hunkered down in the trailer while he was gone, as it was drizzling outside. The kids worked on school work and then played minecraft on devices. They were having a castle building contest. Matthew went with David on his parts journey. When the raining stopped, Isabel and Alexander and I made a short hike down to the pretty lake. After 3 hours, David returned. While he put the new parts on, we had lunch and were ready to go as he and Calvin finished the job. I am always so impressed that David can solve so many problems and fix so many things! 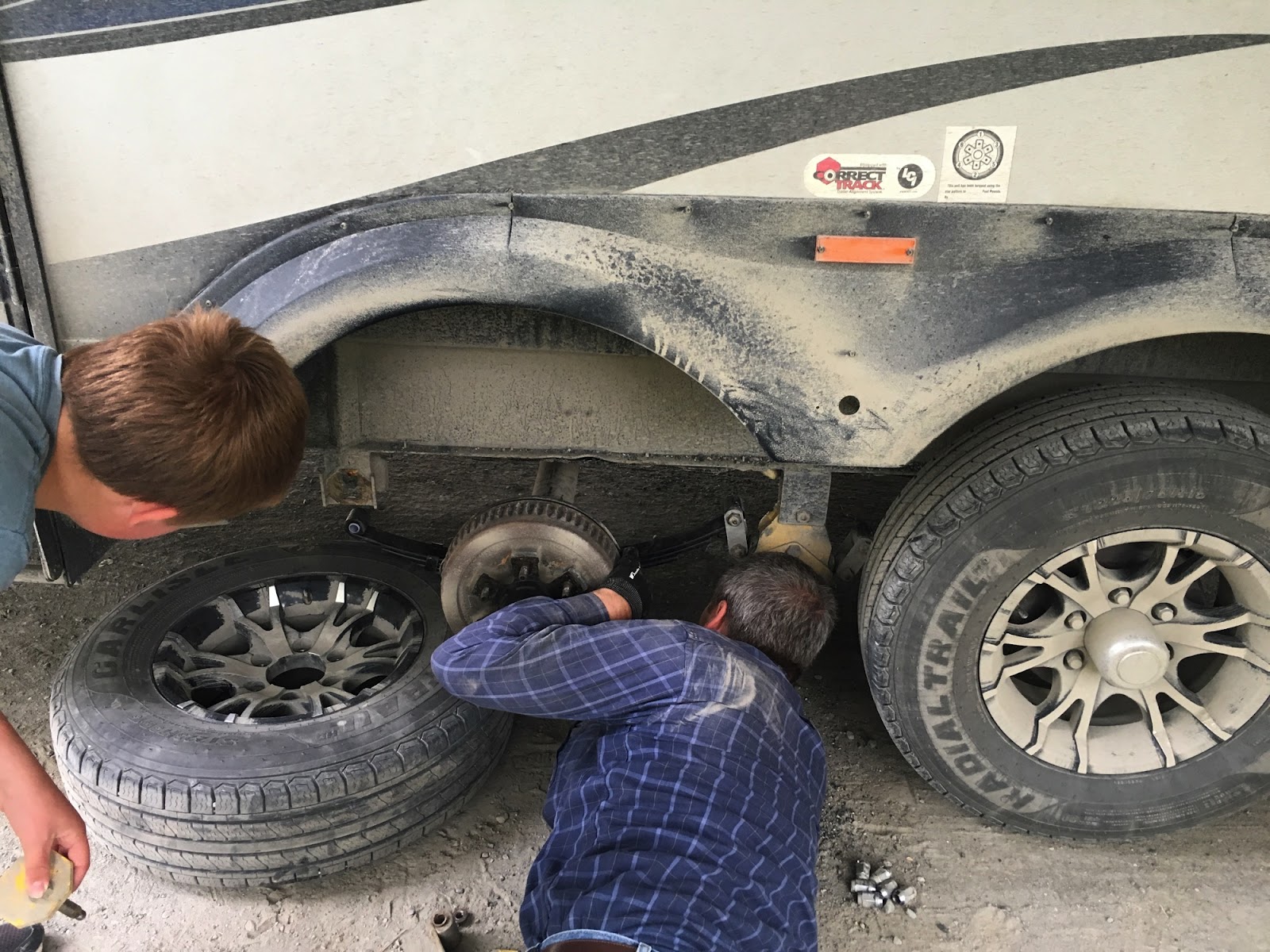 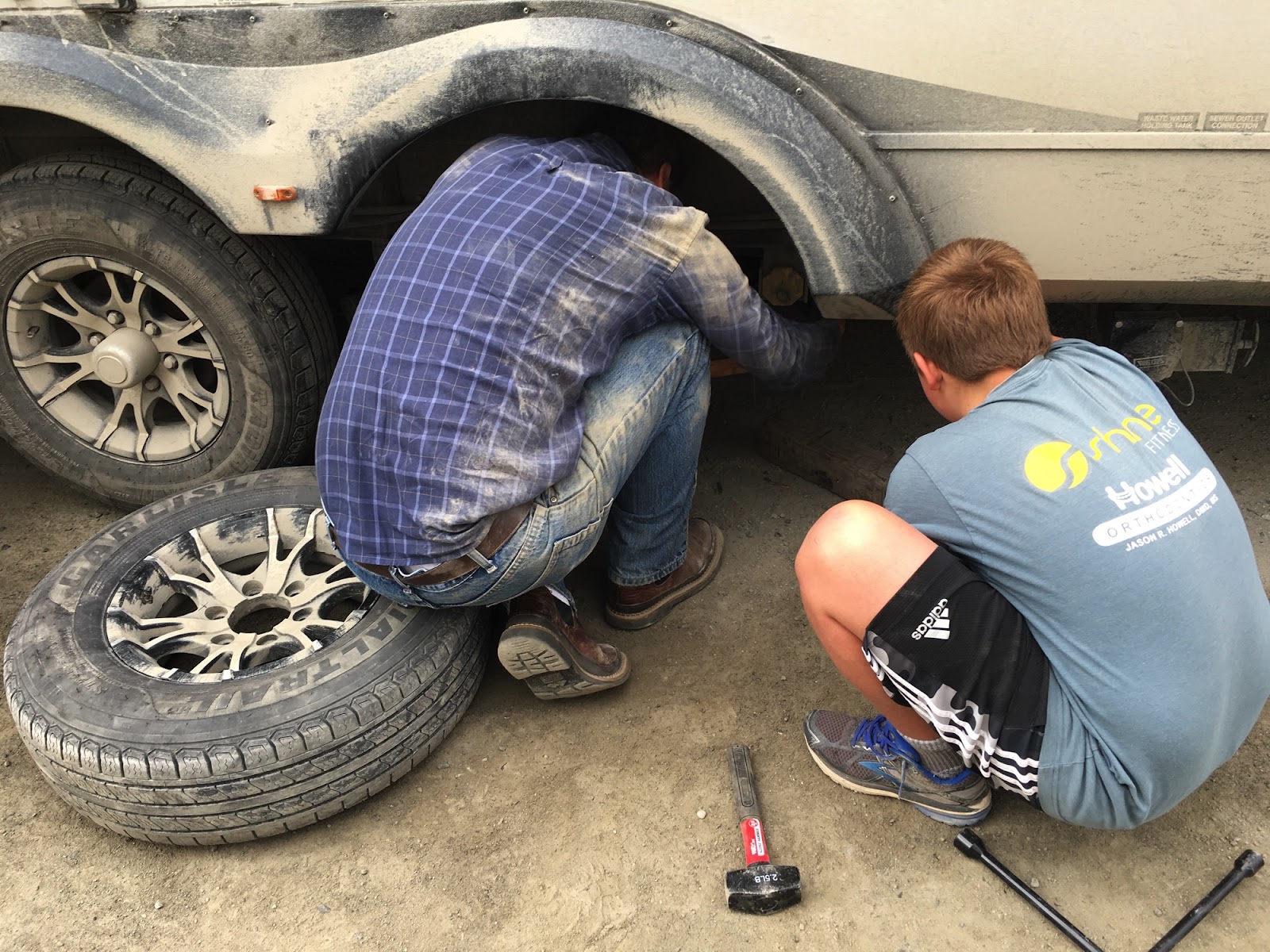 Finally, after 3pm, we were ready to hit the road! We made it 7 hours before stopping for the night, with about 3 hours left for the morning to get caught up on our route.
Posted by The Blood Family