Alaska to Idaho - the final leg

After our delay the day before, we were almost back on track. After driving til 10pm, we found a great lakeside camp spot in a BC provincial park. It was a beautiful view in the morning.
We had chosen to take the Cassier highway thru BC to head south. It is a less traveled road, and supposedly went thru more towns than the ALCAN. However, there weren't really many towns on either road, but the towns Cassier passed thru were tiny with no services really. The scenery was beautiful, even in the drizzling rain. Mountains, and lakes, and rivers, and narrow bridges, and grasses and trees, beautiful. The road was much more narrow, no shoulders at all. We didn't see any wildlife the first day, but in the morning as we drove the last 3 hours to Meziadin lake, we saw a black bear along the side of the road. He ran into the bushes as we went whizzing by.

We finally reached our stop at Meziadin Lake. I had planned to be here 2 nights so we could have a full day here, but we were just a few hours behind schedule. We arrived at lunch time, and luckily found an open campsite on the lakefront. Even though it was raining, it was still quite pretty. We made a quick lunch, and hopped back in the car for a side trip, leaving the trailer at the campground. An hour away are the towns of Stewart, BC and Hyder, Alaska. The town of Hyder, while on the Alaska Panhandle can only be reached through Canada. The National Forest there has a Bear viewing area where the bears come to a river to catch and eat Salmon fresh from the stream.

The drive was beautiful. We had to drive through this incredible canyon to get there. It was hard to see the full view through all the low clouds and drizzling rain, but you could tell the mountains around us were tall. There were hundreds of waterfalls pouring down the walls. We passed Bear Glacier with a beautiful blue glow along the edge of a small lake. The river along the road was rushing and full, and a bit muddy from all the rain flooding down on it through the waterfalls. It was an incredible drive!

We arrived in the drizzling rain to the Forest Service Bear viewing area, to find out that the rain affects the bears! While they don't mind being wet, when it rains for a few days in a row, the water level in the small stream increases and the clarity is affected. This makes it harder for the bears to catch Salmon. Couple that with the fact that the Salmon had been running in the area for 2 weeks already, so the bears were okay taking a break from eating Salmon for a few days of rain. We did see a bear, but we'd already seen bears, several on our trip. I wanted to see them grab and eat fish! No such luck. But we did see the Salmon, and that was pretty cool. It's really quite shallow in this stream, so you could see the backs of the salmon sticking out of the water as they swam upstream. That was pretty interesting to watch, even in the rain. 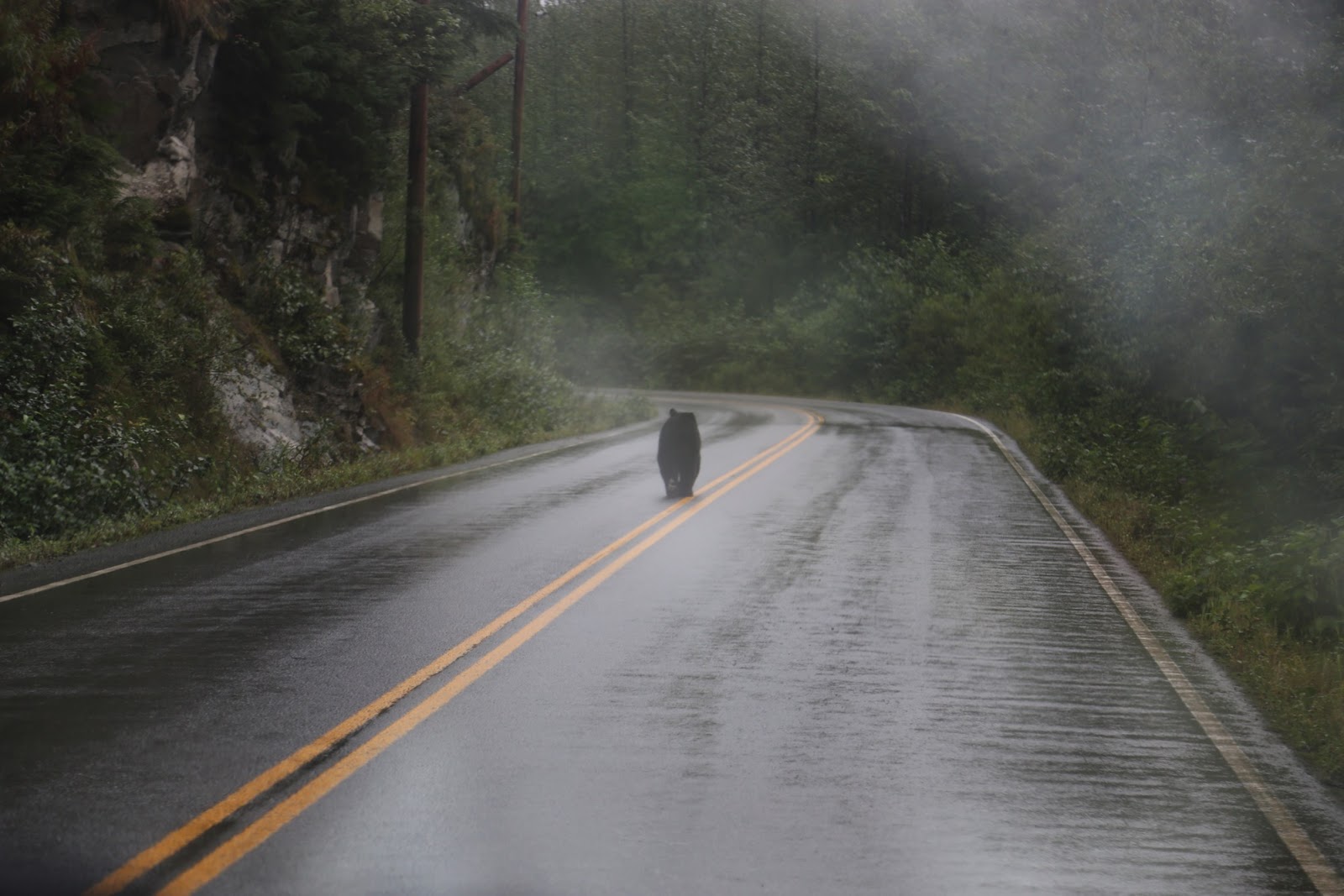 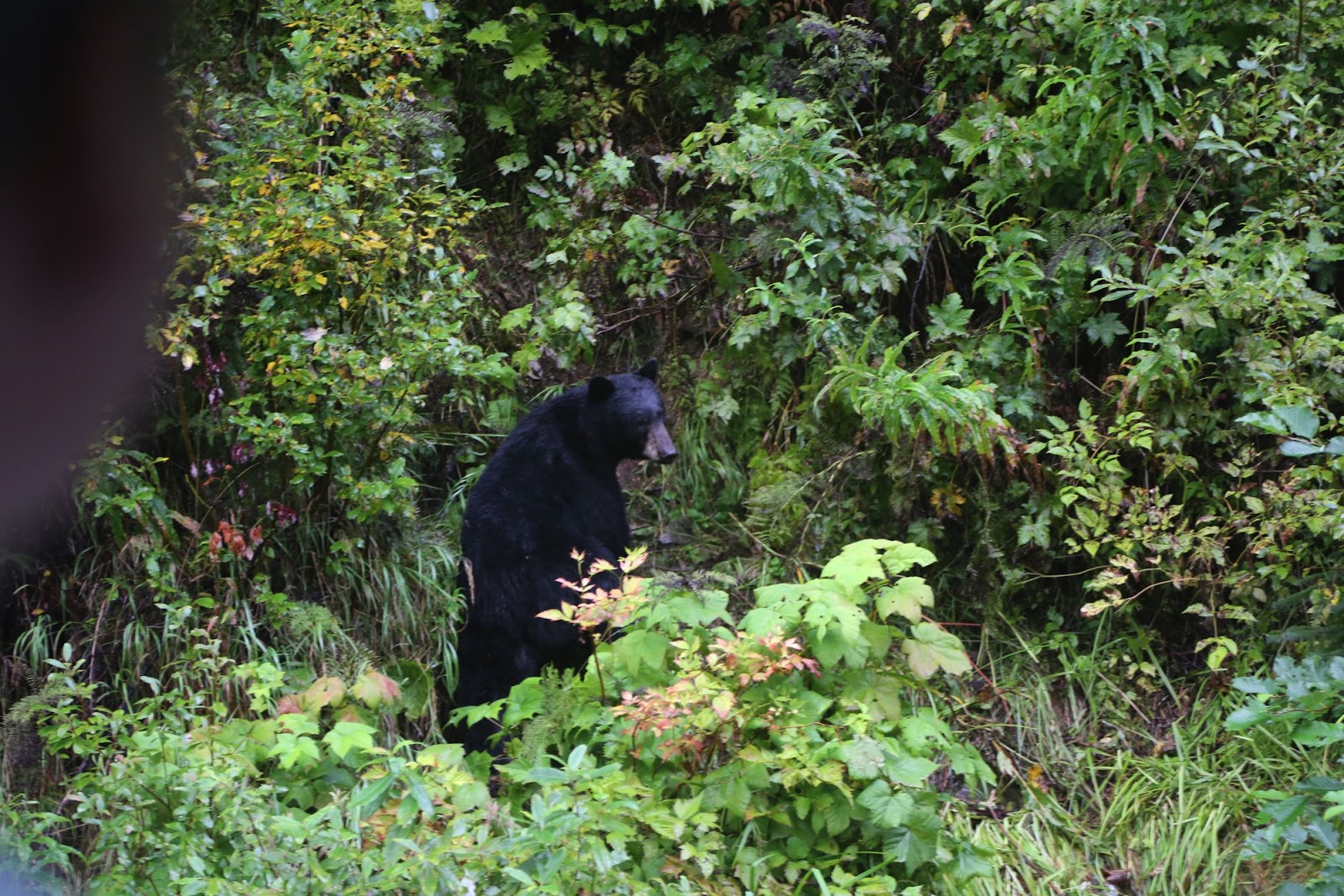 After talking with the rangers about the area, we decided to drive further up the road to see the Glacier that carved the area. Salmon Glacier can be seen by driving an hour up the rough gravel road. We stopped at the toe of the glacier and decided to continue on to the summit view. It was a beautiful drive and when we reached the summit viewing area we were glad we had made the drive. It really was spectacular. As many glaciers as we have seen at this point in the trip, you would think we would be done viewing them. But they truly are incredible and beautiful! 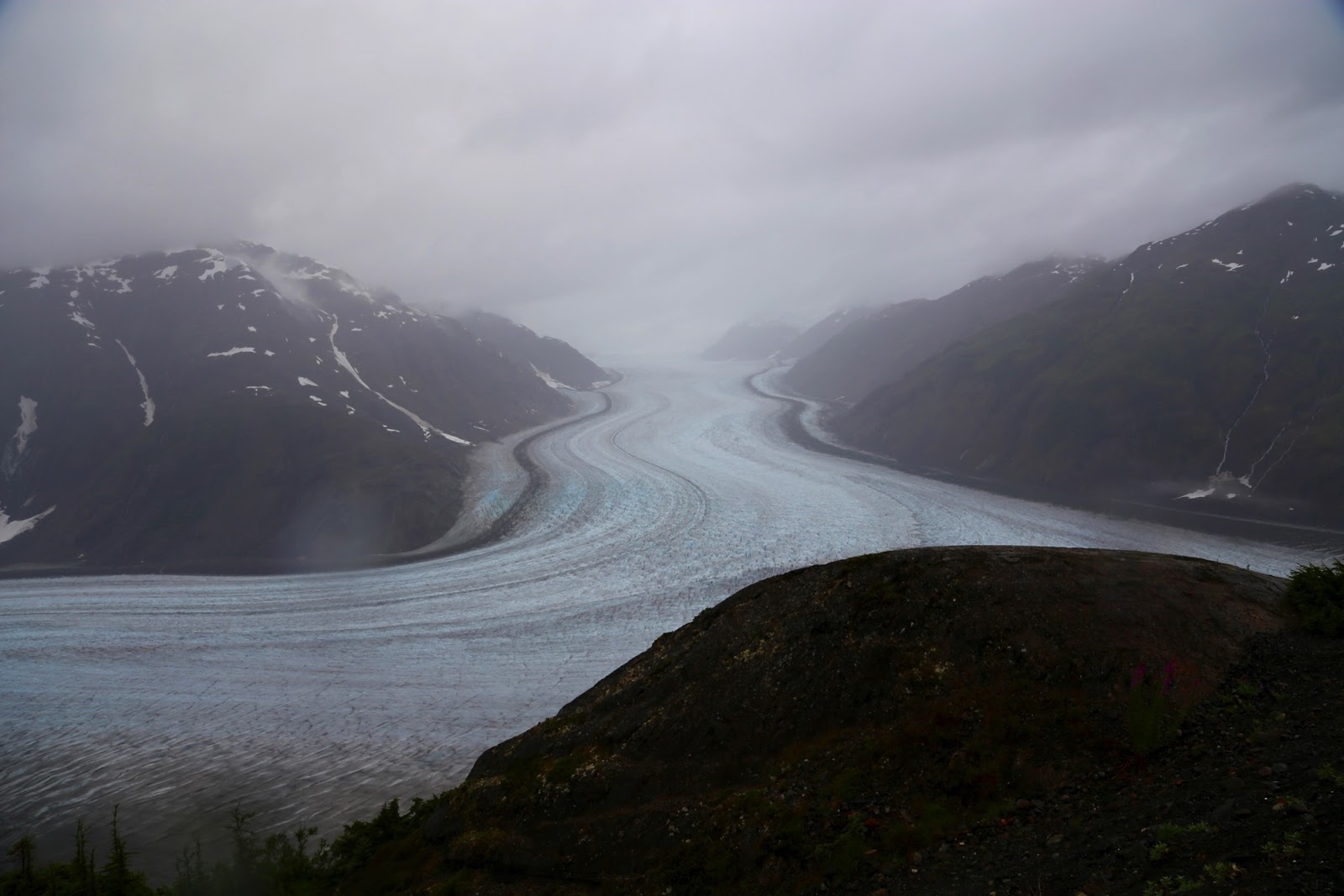 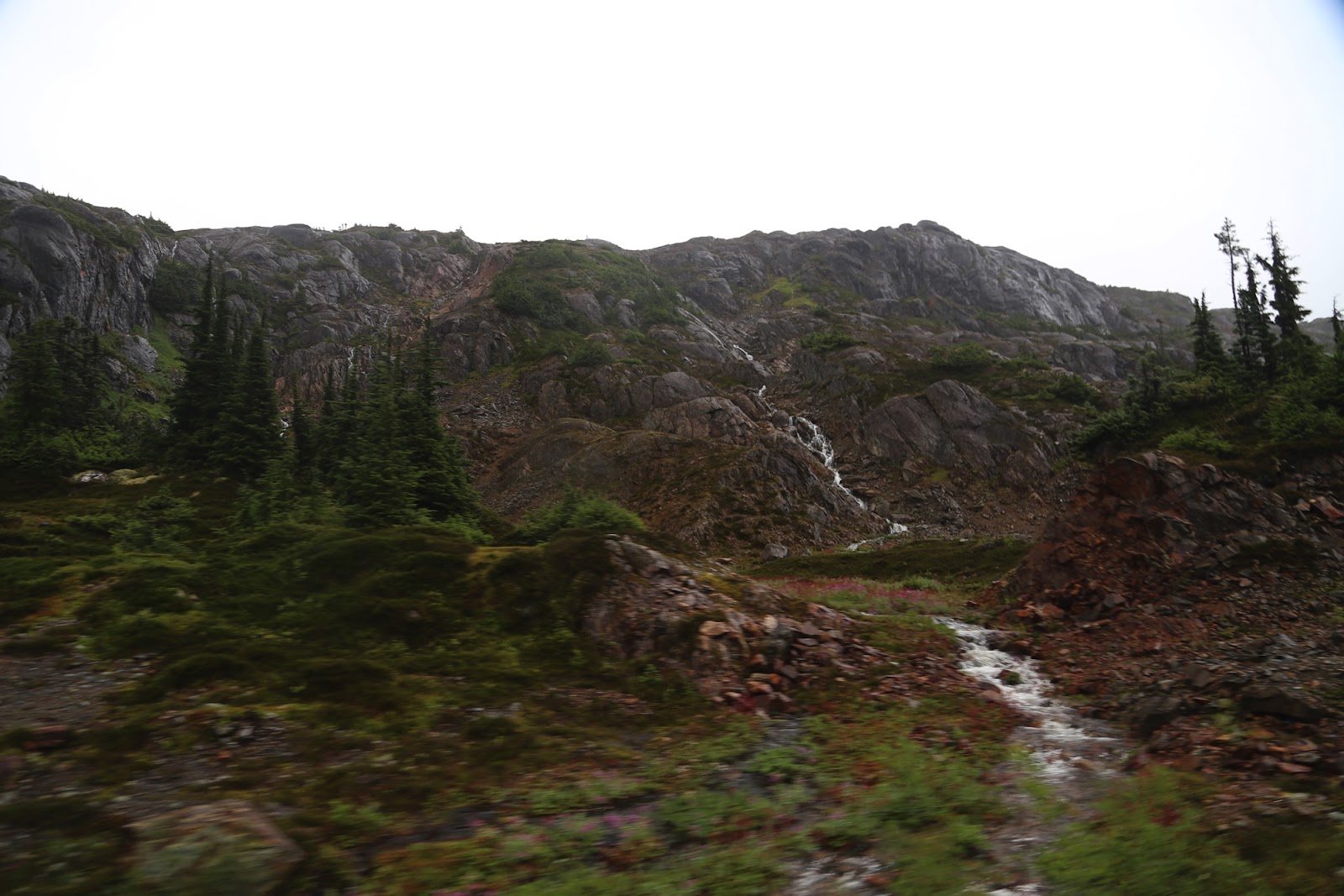 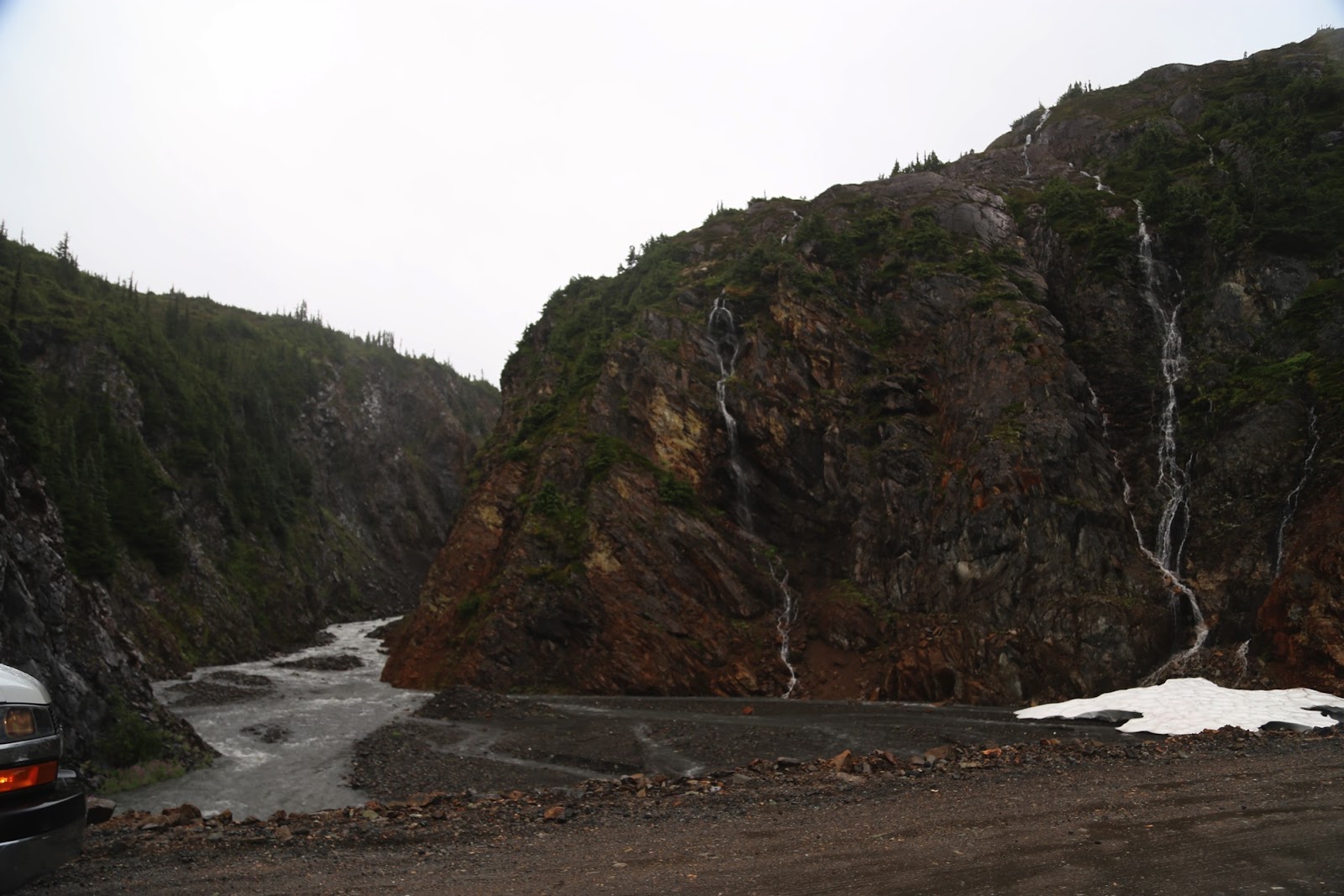 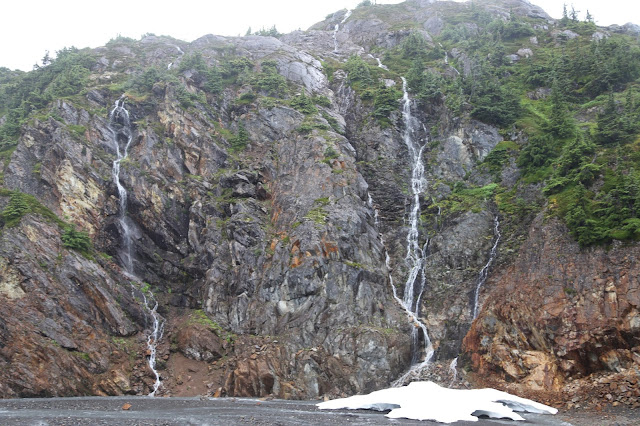 As we drove back to Canada thru Hyder we stopped to see the Fjord, but the low cloud cover prevented us from seeing the fjord walls, but it is amazing to think that right off the end of the dock its 5-600 feet deep.

Passing back to Canada required a Customs and Border Stop. We passed no booth on the way into the US here, but were questioned entering back into Canada about where we had been and what we had done.

The next morning we enjoyed a restful morning. We weren't in a rush to pack up and leave. We had the campsite until 11am so we enjoyed the view and rested up for our 2 day drive home. David had talked to the campsite manager, who told him they fish for Sockeye Salmon in the lake. Maybe we should have booked a short fishing trip to take some yummy Salmon home.

I spent about an hour that morning finally taking photos of Calvin and Savannah. Savannah was struggling to smile so David pulled out some tricks to help her feel like it was a professional photo shoot-- a personal fan to get some blowing hair shots! That had Savannah laughing! 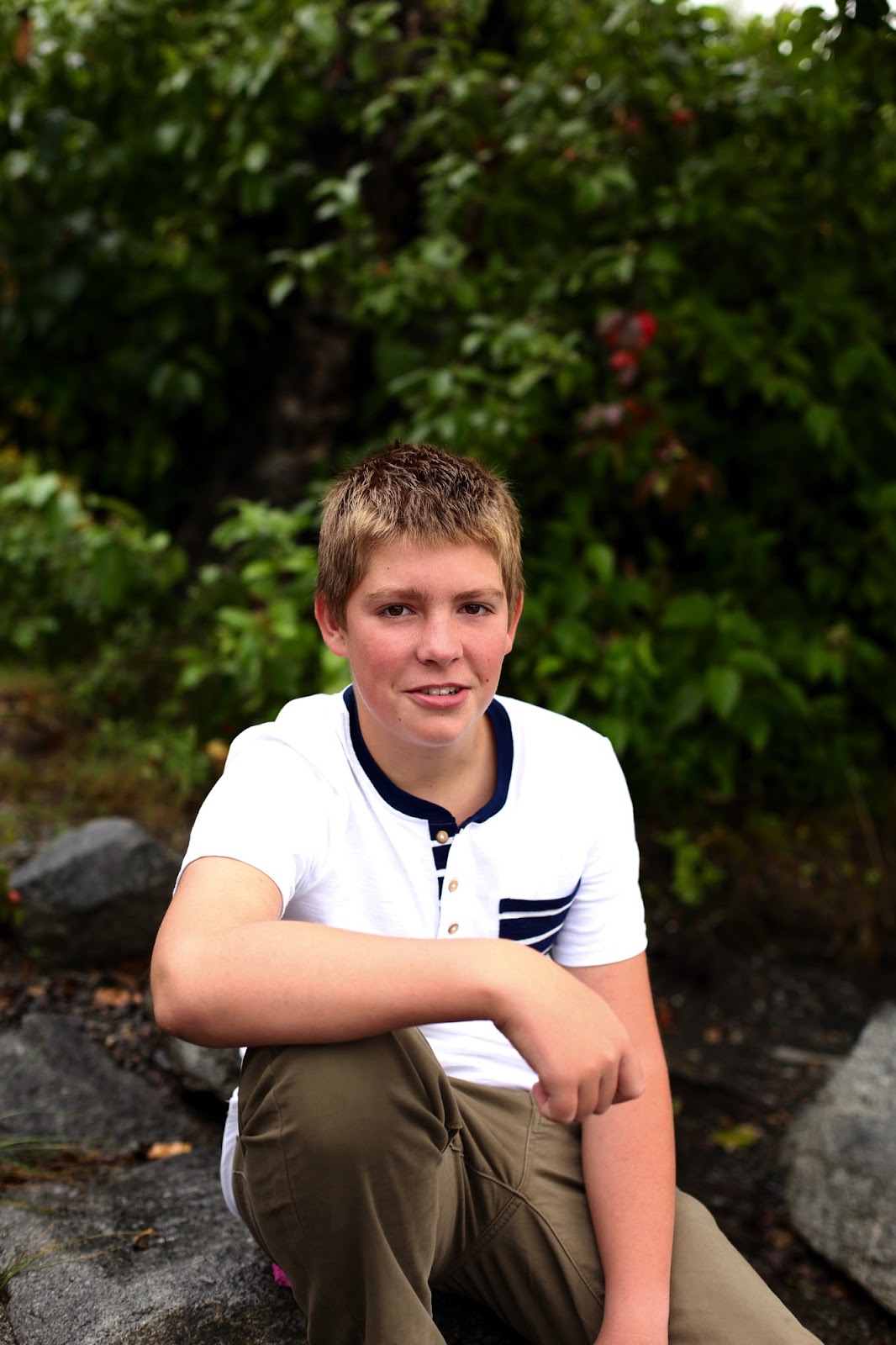 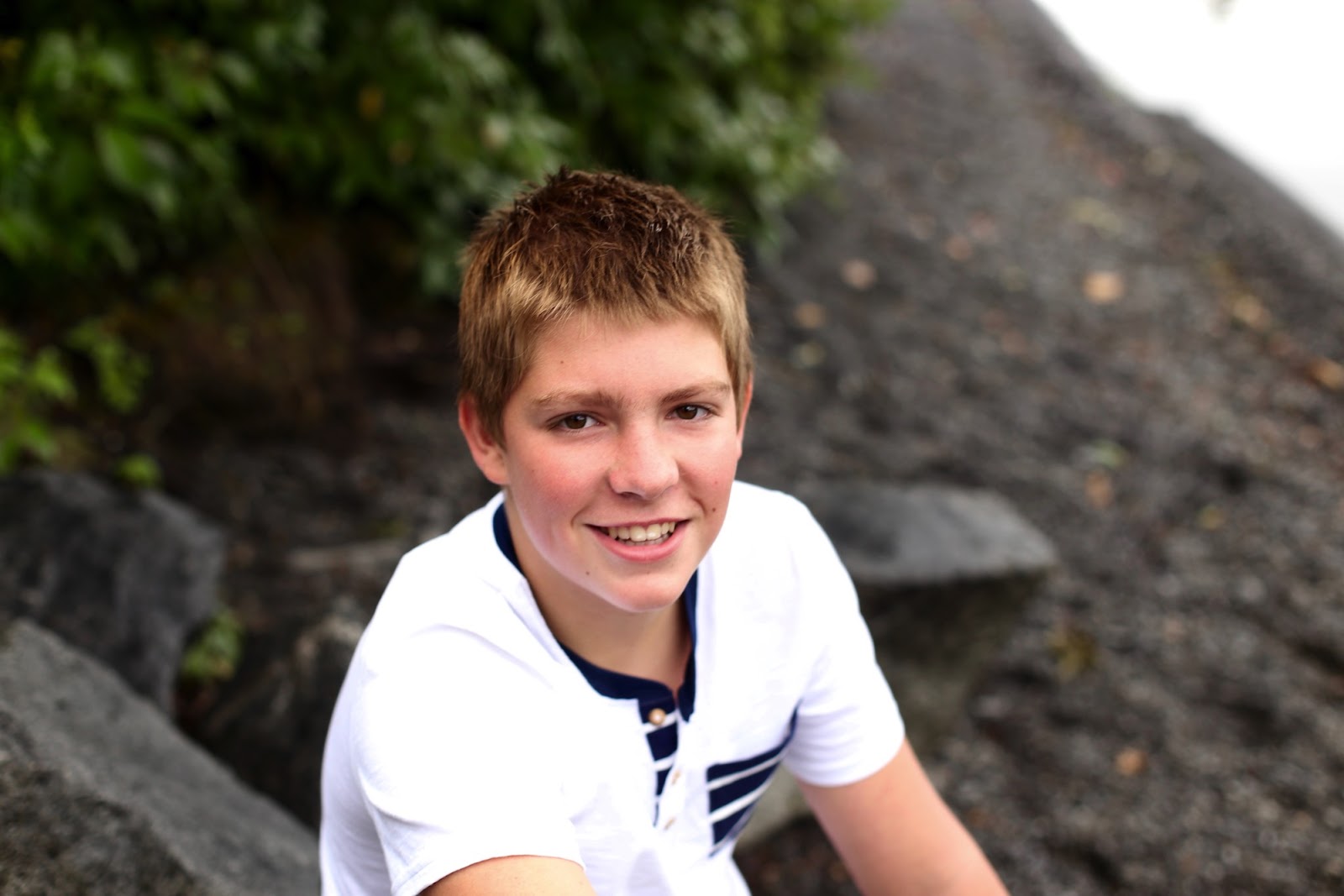 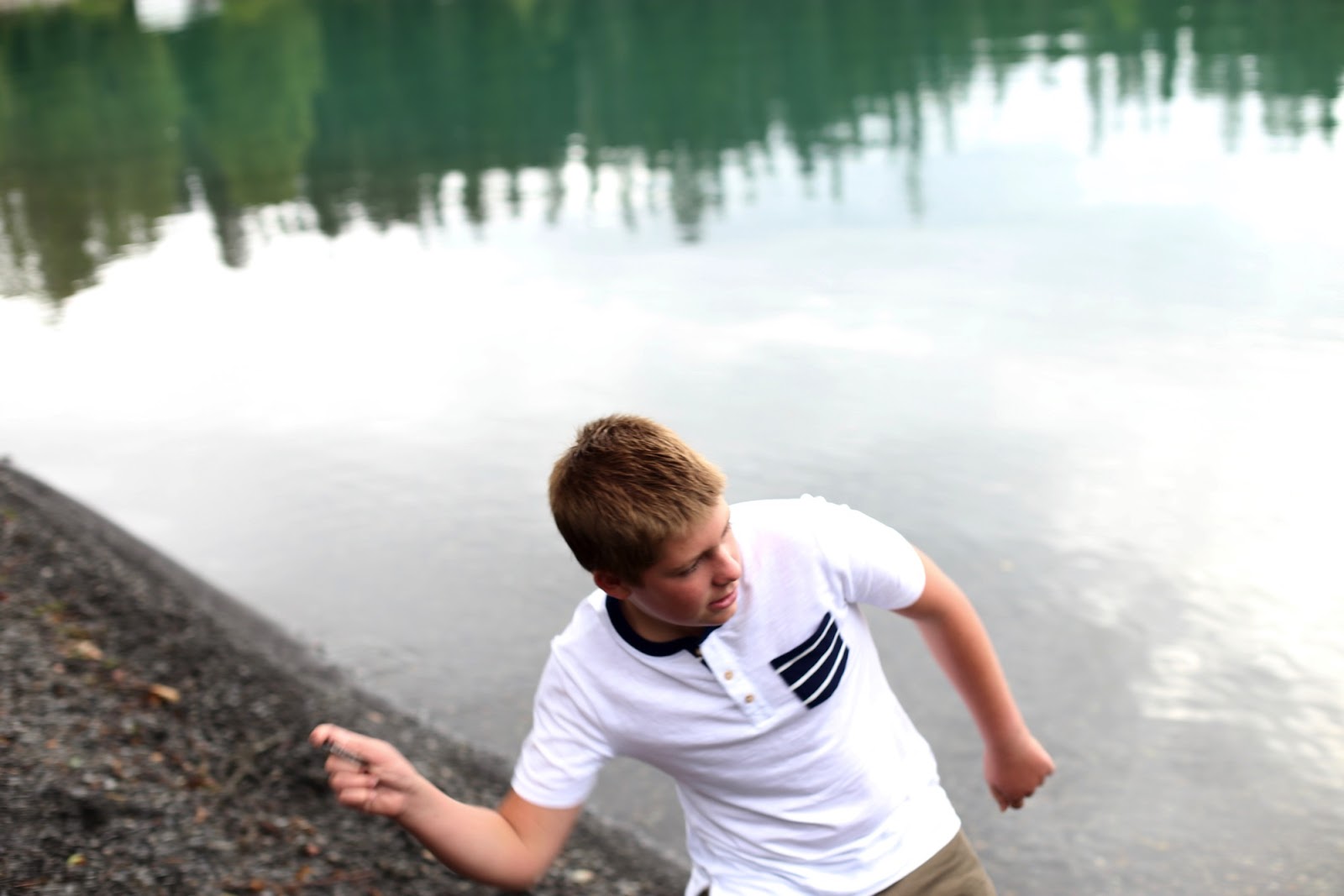 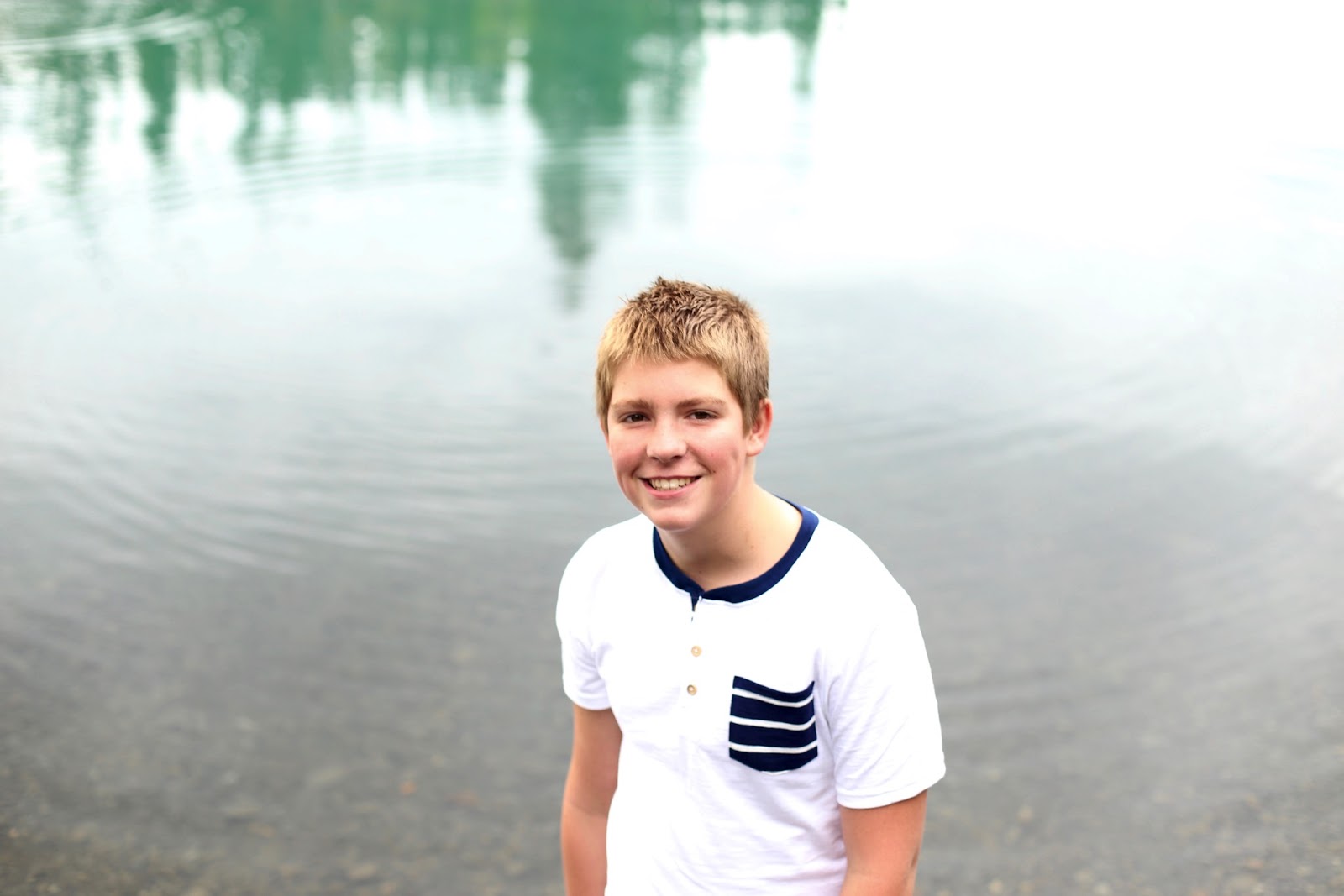 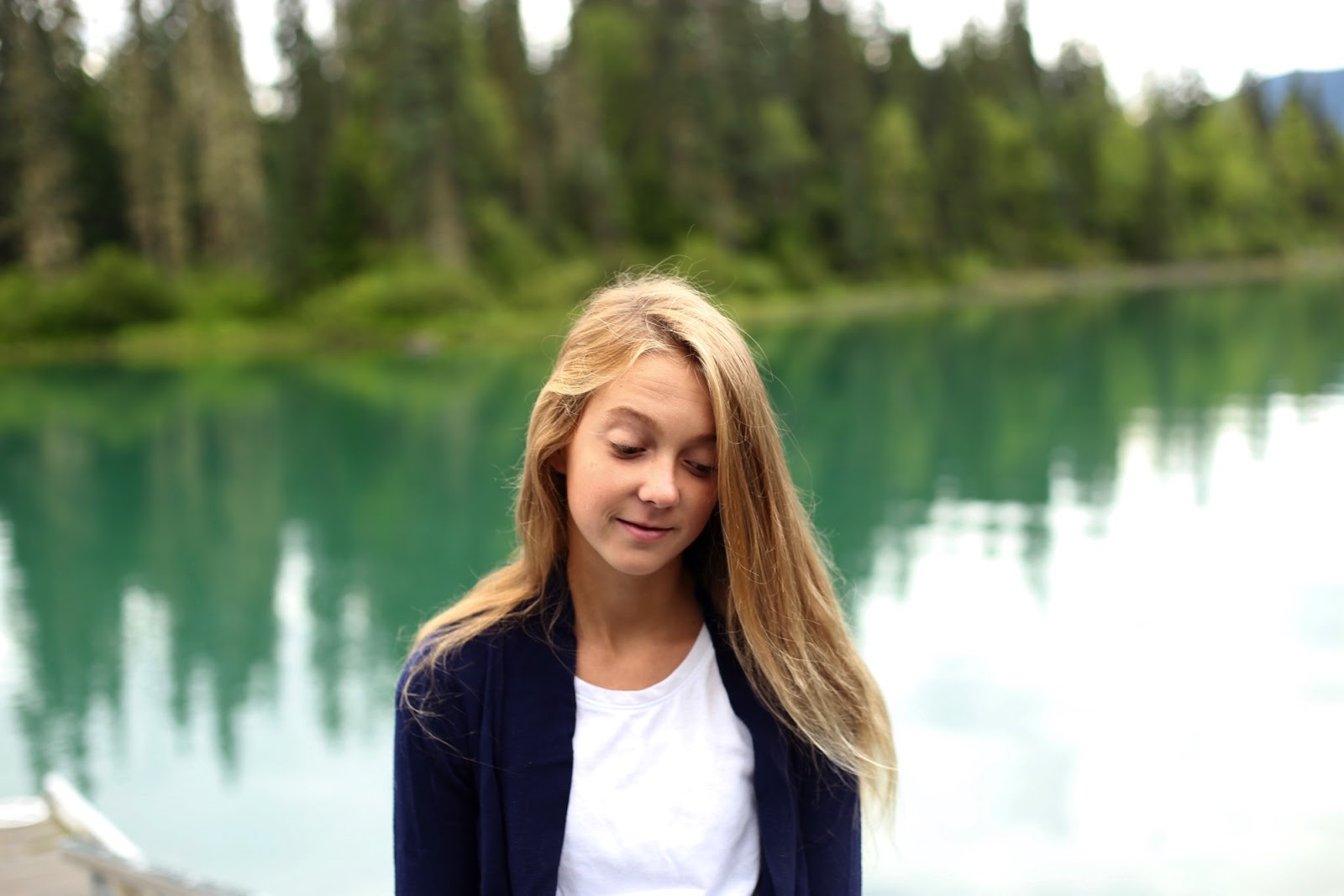 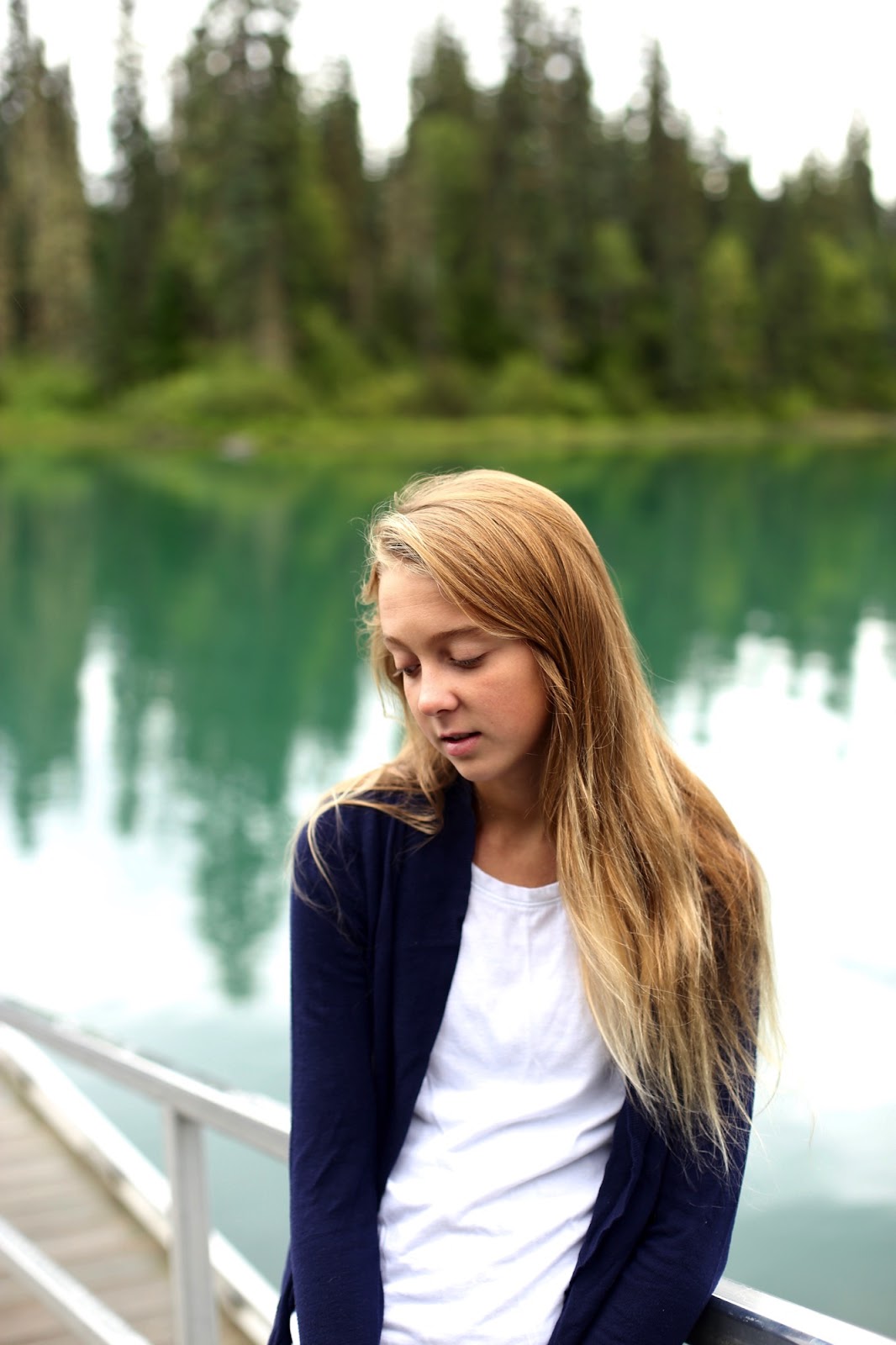 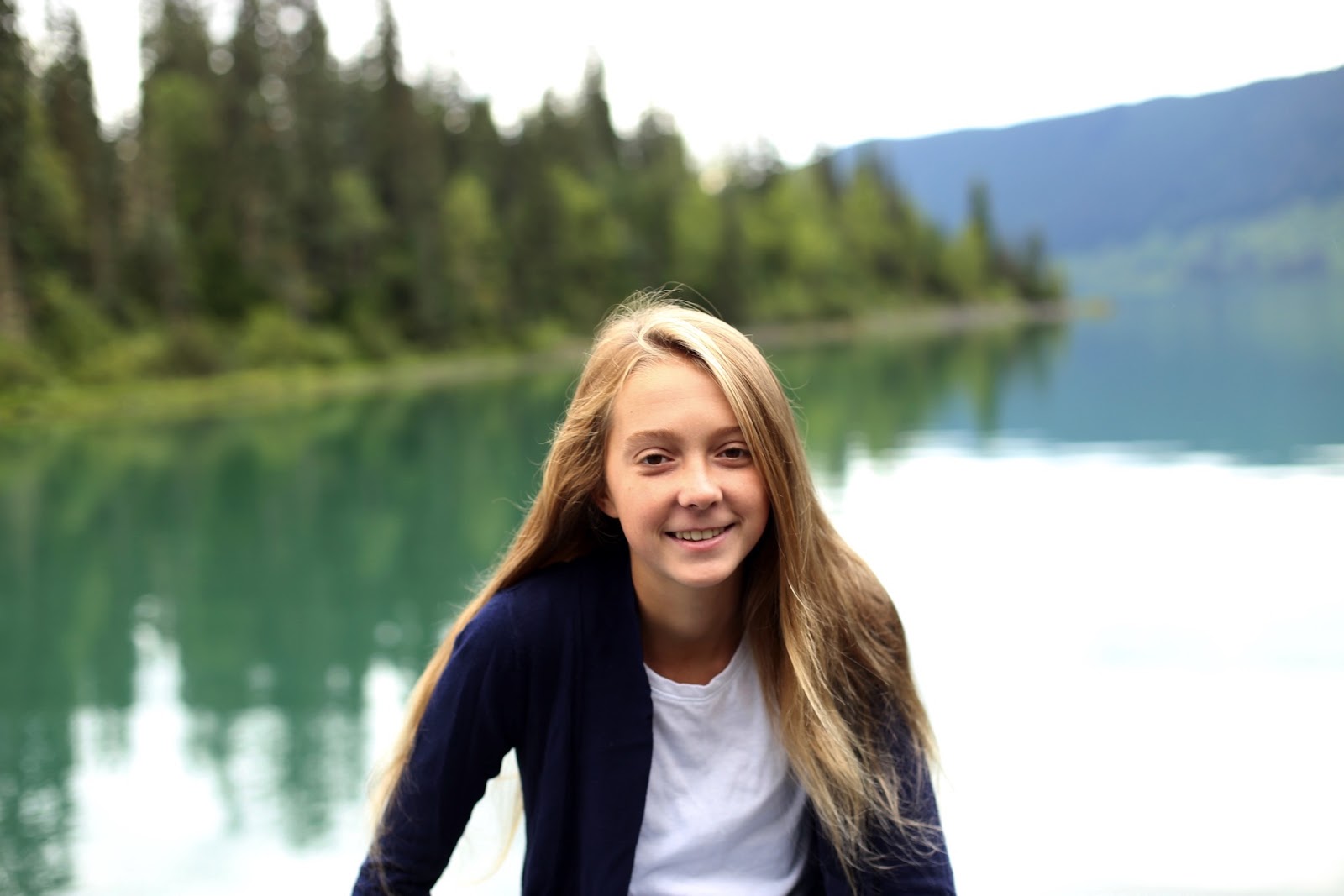 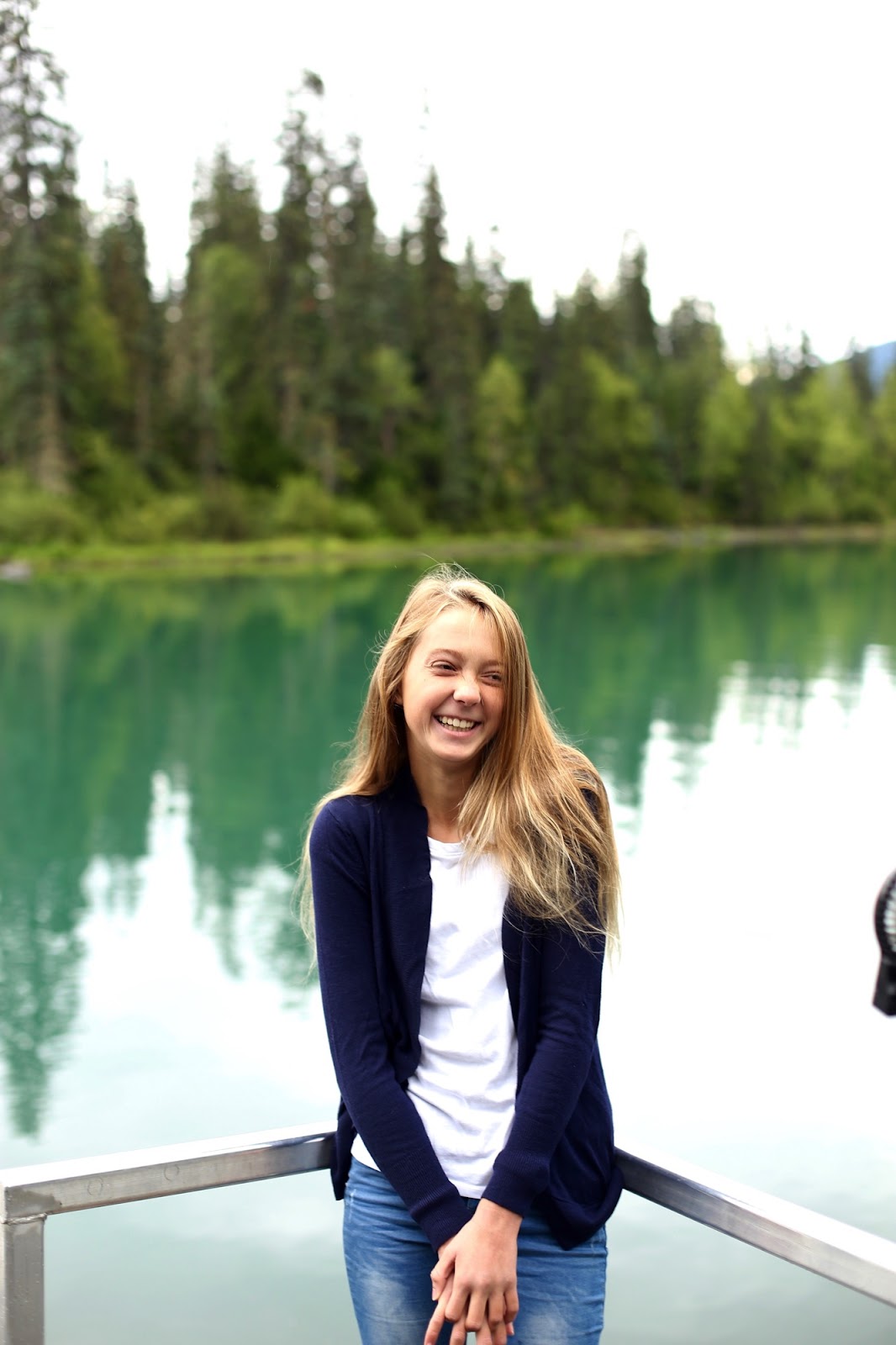 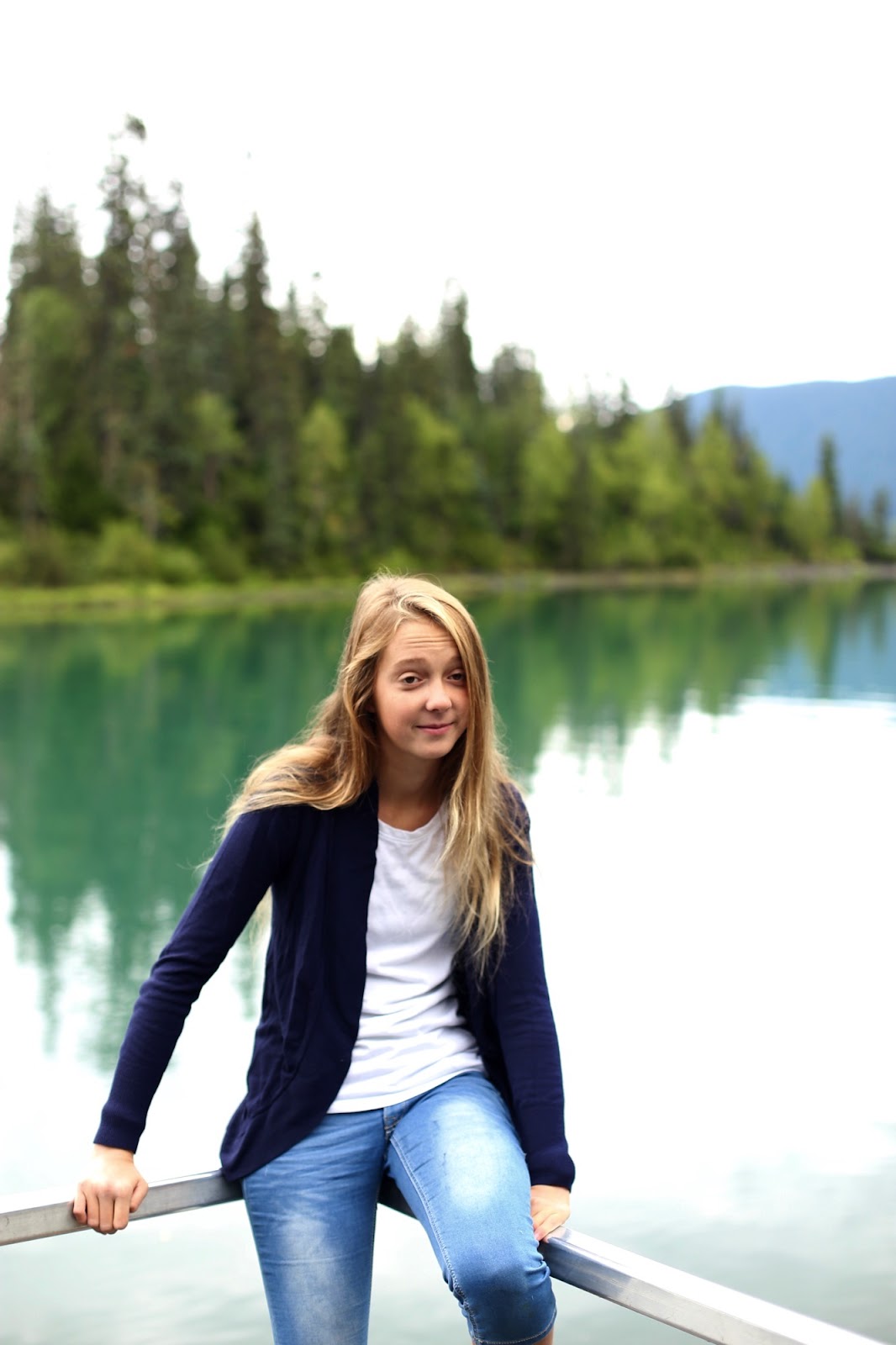 That rest of day we spent driving into the night. We passed near long burning forest fires in the area. They had shut down numerous campgrounds. We eventually found a rest stop to spend the night at. In the morning we made a couple of stops at a few stores looking for some of Grandma's favorite cookies to bring home to her, and a shirt for Grandpa. No such luck on finding the shirt, so we ordered a great Canada t-shirt on Amazon.

We finally approached the border crossing and the line was sooo long! I couldn't even see the border crossing pavilion. The road was a one lane road thru a town. I can't imagine what the locals think in trying to get home in that area. As I looked around though, I noticed a sign that said on Saturday and Sunday RVs and trailers should use the Commercial Truck border crossing area- one block to the west. Knowing that the line would most likely be shorter, we headed that direction. Only one Truck was in front of us. Although as we pulled up, I spotted wild Blackberries on the side of the road and the kids all hopped out to go pick some. We all wished we'd had more time, but too soon the truck in front of us pulled away and it was our turn to approach the border patrol, and the kids all came running back to the van. Soon enough we were back in the USA.

We passed thru Seattle, and headed towards home. We made a stop in southeast Washington for peaches. Yakima Valley is full of fruit trees. I bought 3 boxes full of ripe peaches to can and freeze in the next few days.

From here we drove and drove. We made it home just after midnight and to bed by 1am. It was a long, fun trip! But I was so glad to sleep in my bed!
Posted by The Blood Family