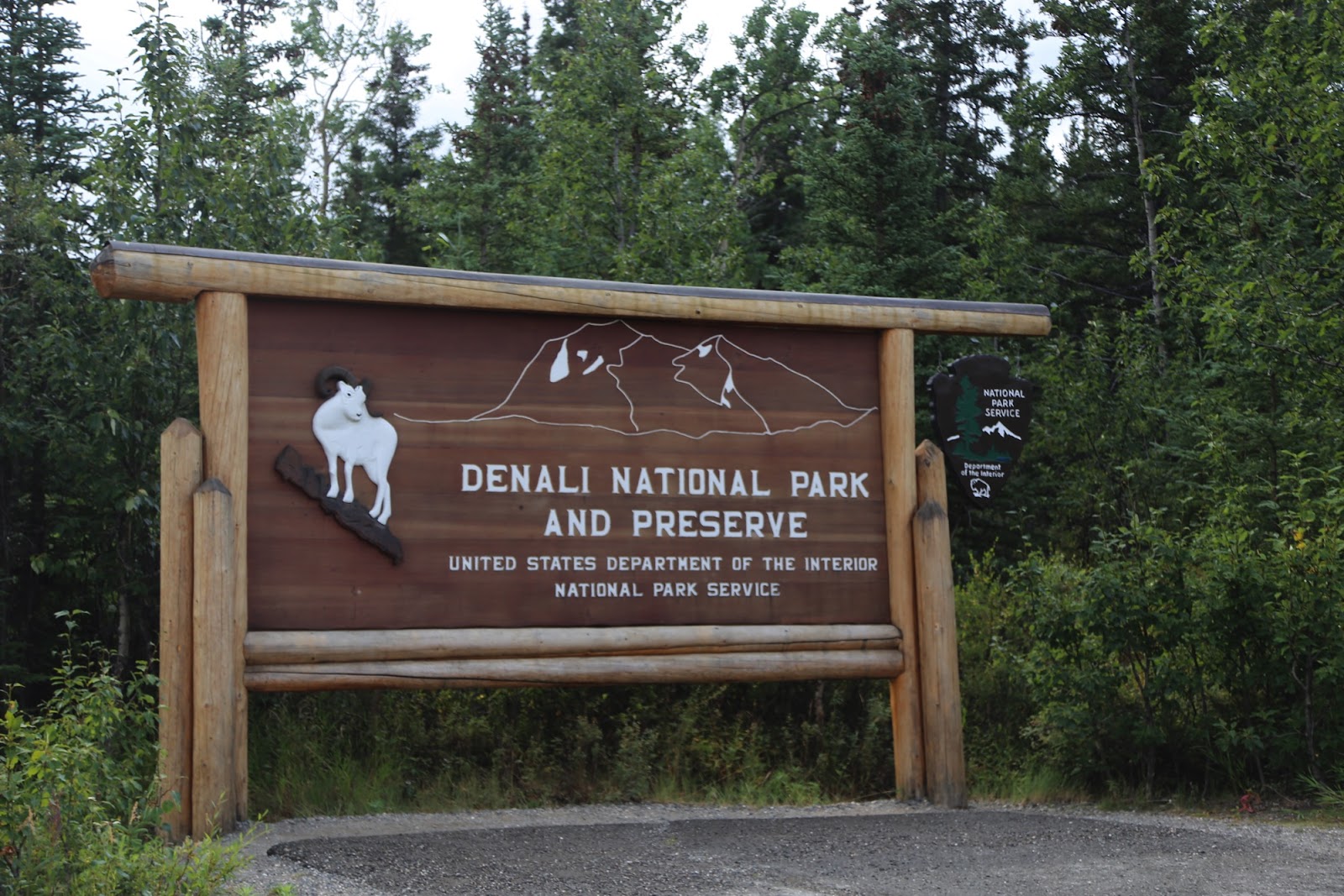 After getting our laundry all done, we headed over to the park wilderness center to find out about bus shuttle tickets. While we were camping at mile 29 in the park, where they only let cars go if you have a campsite booked, we still had to get tickets to ride the bus if we wanted to go further into the park. 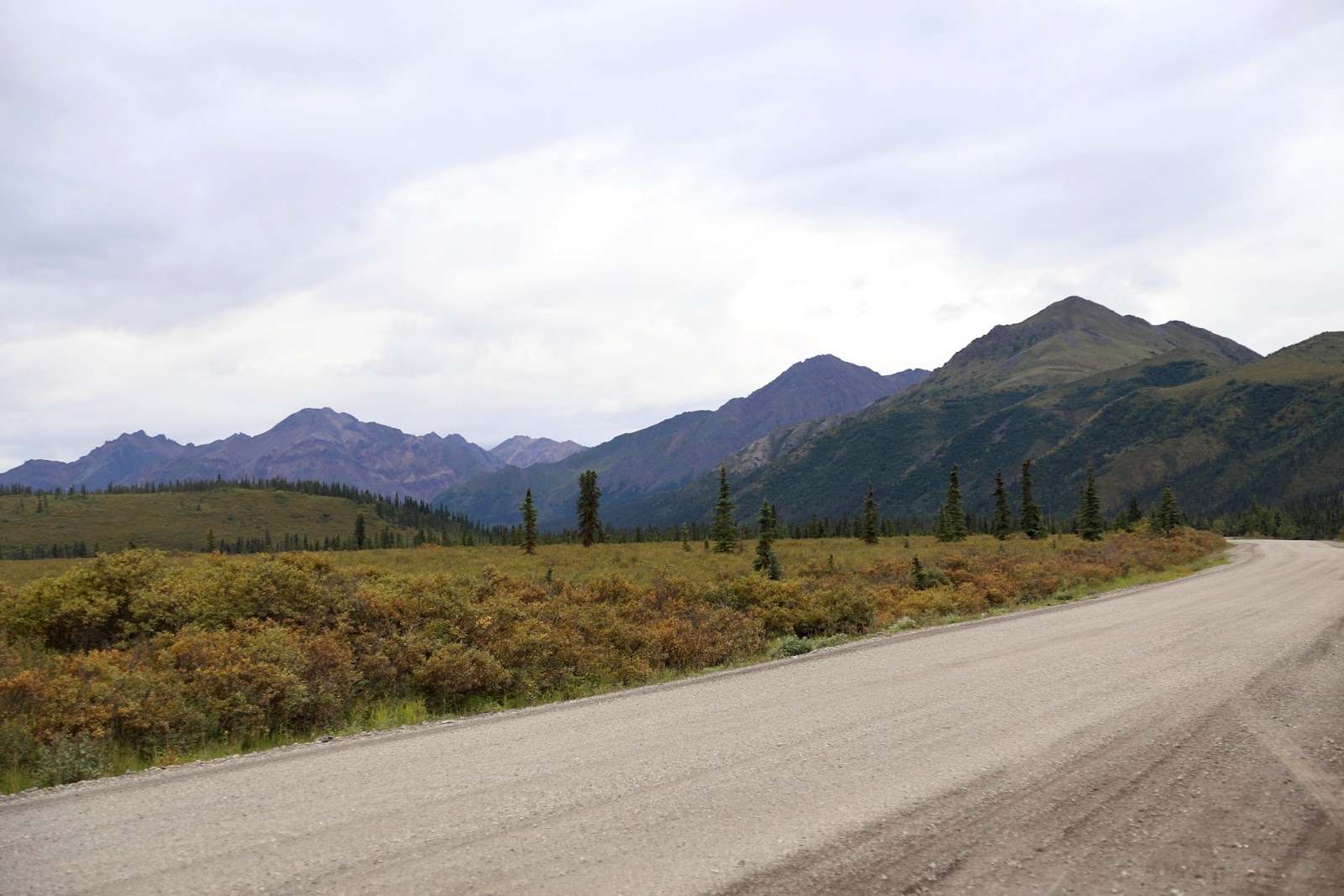 I thought I had done enough research months back when booking my campsites for the trip, but as I was trying to look up trails to hike and must see things in Denali, i was finding I had not done enough research. I knew we'd have to ride the bus past our campground, however, I did not know the bus takes 3 hours to go 35 miles into the park. I also did not know there aren't very many trails in the park. They like to "encourage" you to hop off the bus at anytime and trek anywhere you want, no trail needed. However, this "encouragement" comes with strings attached. You only have confirmed seats on the bus your initially ride on. So, if you get off the bus, you can flag down any bus, they will happily pick you up-- if they have seats available for you. Most busses that pass thru the park are full, and most people do not get off the bus- other than to use the restroom at rest stops, and then they get right back on. This makes it really hard to get off the bus and explore. Especially with a large family. Oh and busses run 30 mins apart, so maybe one bus would have room for 4, and the other 4 would be left waiting 30 mins for the next bus to come along. This is a terrible idea. Next difficulty with getting of the bus-- they require all children under the age of 7 to ride in a car seat--What?!? We were literally riding on school buses, they've been modified to have individual seats, but still compartmentalized, Why would you need a car seat?? Well I asked... they say it's the law in Alaska, and they enforce it. If you don't have one, the Wilderness center may have one to loan you. I asked them how in the world do millions of children in our country get to school everyday without car seats. They told me safety was there number one focus, and that this was the REAL wilderness. I asked them if their drivers did not know how to drive on a road that has only their busses on it. But the real question here is-- How do you hike with a car seat????

So the other issue with their "encouragement". They are constantly telling you how far you need to stay away from the wildlife. And they mostly talk about bears, wolves, moose, and caribou. Along with sheep, that's mostly what you see. But I think this freaks people out, and they do not want to hike and run into these animals.

Our first evening there we made a short hike out to the river and rock beds. The kids had a great time throwing rocks. Then we sat thru the ranger program in a light drizzling rain. From the program I learned they want to keep the park as a preserve. They want to discourage hiking trails, and roads through out the park. They want to keep the animals there, and the people out. They don't want it to become another yellowstone or yosemite. I'm not sure what they mean by that though. I didn't know those were "bad" parks. 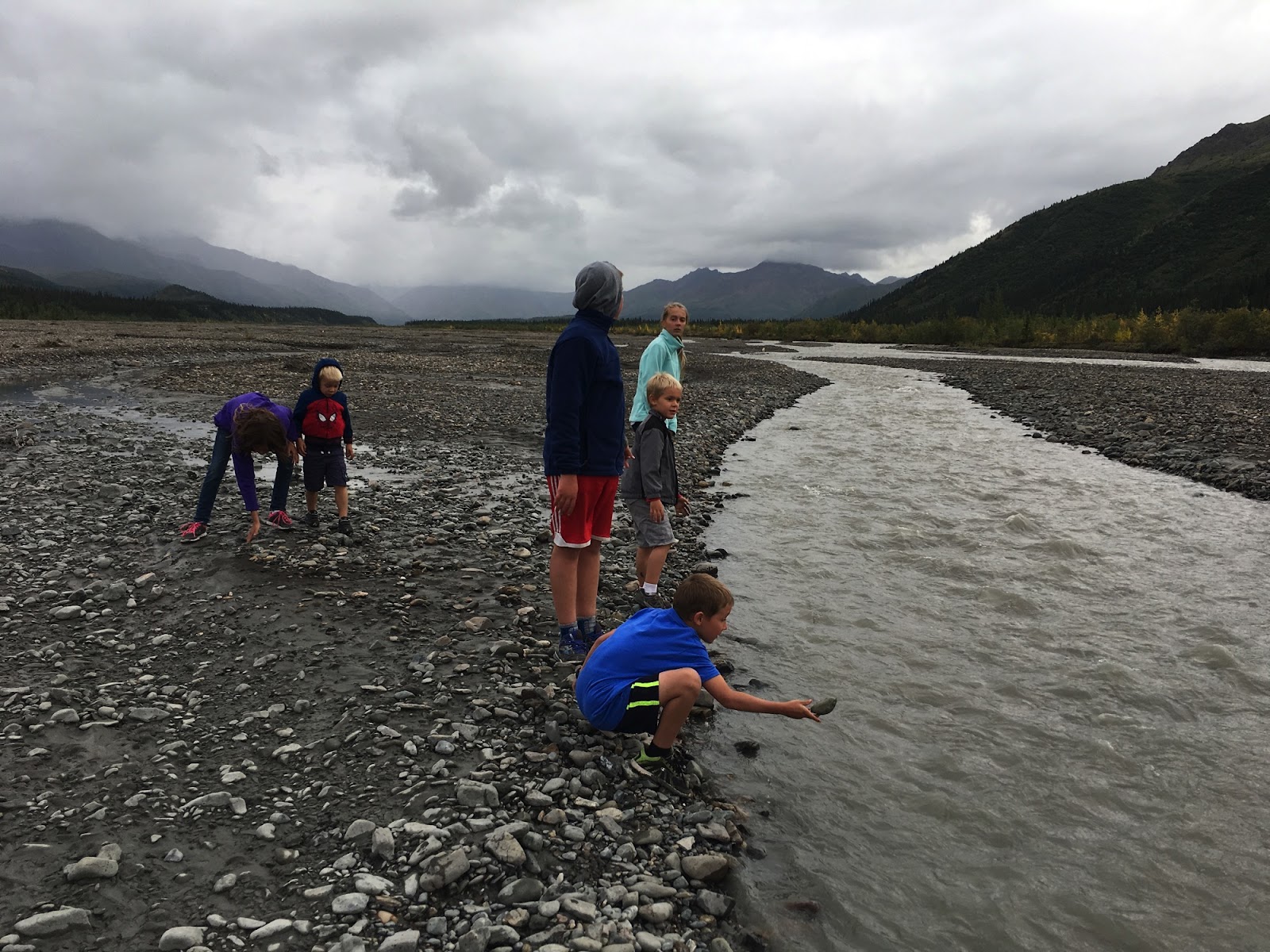 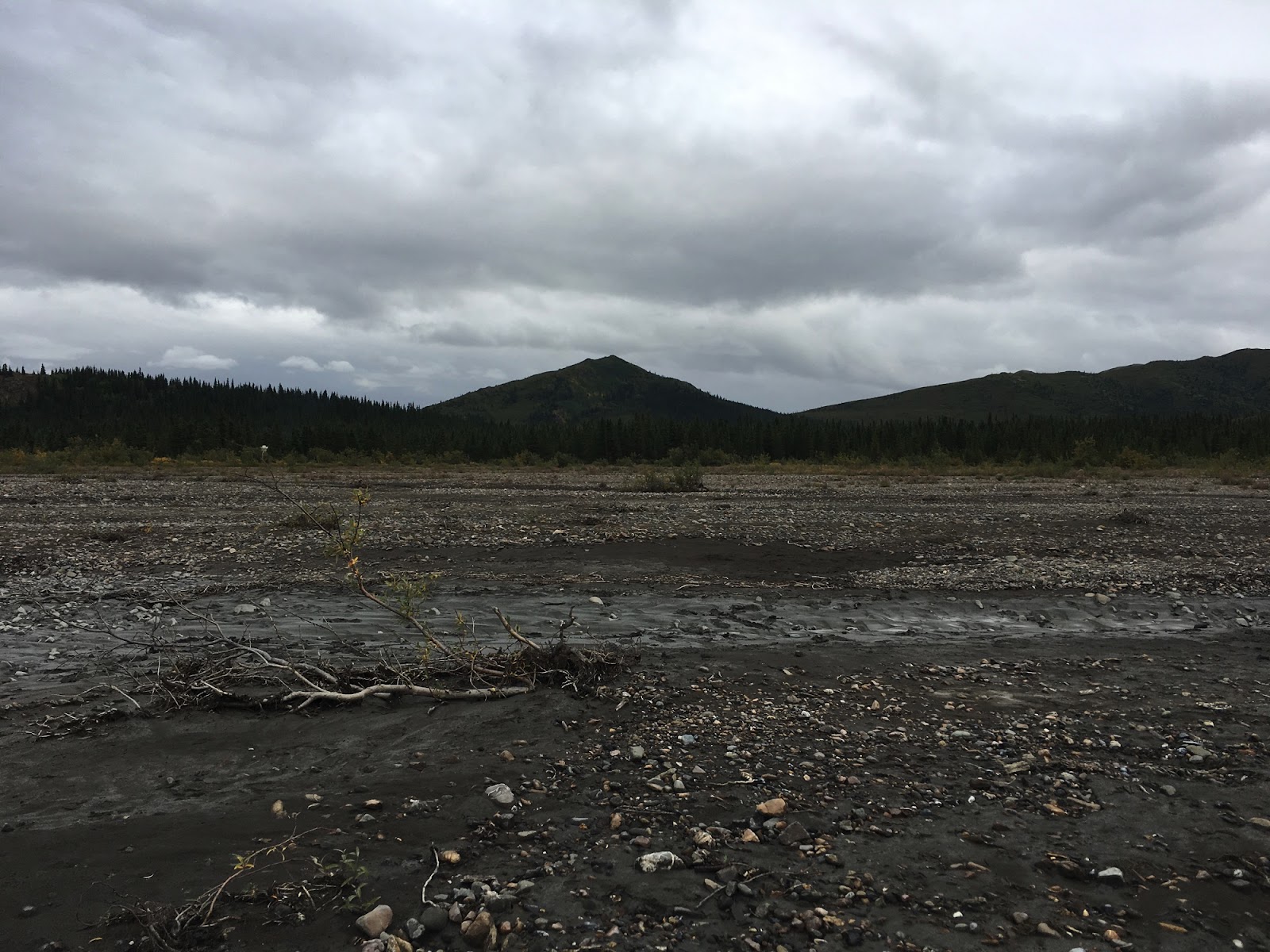 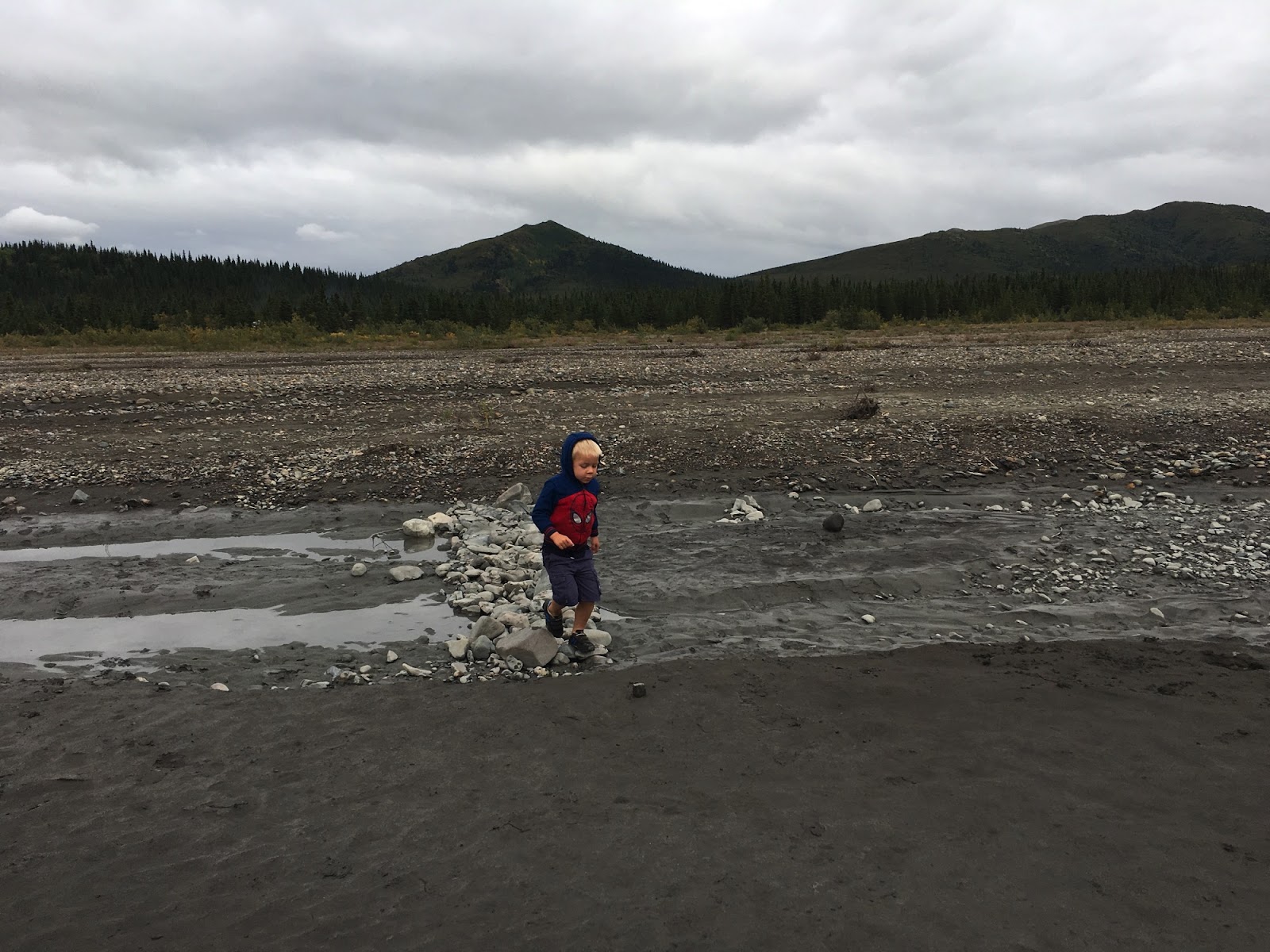 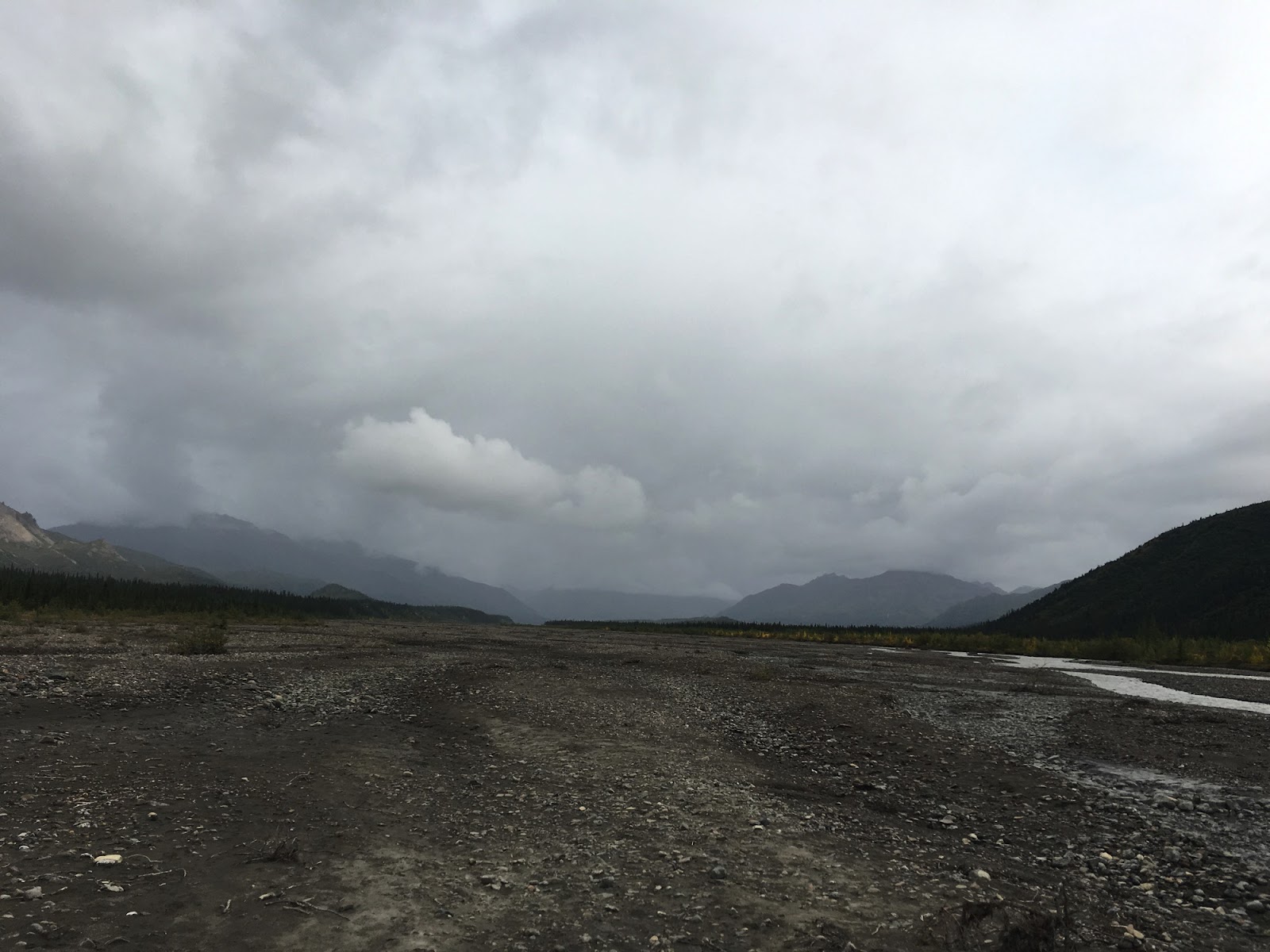 So the morning after we got there, we got on the bus, but since we were 29 miles into the park, we didn't get on with everyone else, so there were not 8 seats together on the bus for us. And that sucks to spend 3 hours on a bus spread out. Not much for a family activity. And who wants to spend 3 hours stuck next to other people's kids? After some shifting we gathered 5 seats together, and the other 3 kids were just a couple rows in front of us. SO it wasn't too bad.

The nice thing about the bus, is there are 50 people looking for wildlife. The bad thing about the bus, is there are 50 people looking for wildlife. Lots of spotters, but then we stop for everything! yup- sheep up on the mountain, so far away they look like rocks... again. Every Caribou gets stopped for. And of course bears are the big attraction. And I'm happy to stop for bears, but again when they look like rocks on the mountain and you have to use binoculars to see them... I only need a couple minutes to stop, not 10. We did see 8 Grizzly bears on our drive there, but very far off, they look okay after I used my zoom lens, and then zoom in even more. And just where were we going on the bus? We picked to go to the Eilsen Visitor Center, at mile 66. The question was were we brave enough to get off the bus there and stay awhile. Every ranger I spoke to "encouraged" us to go there. They have staff that helps you find room on a bus back if you choose to stay longer than your assigned bus. 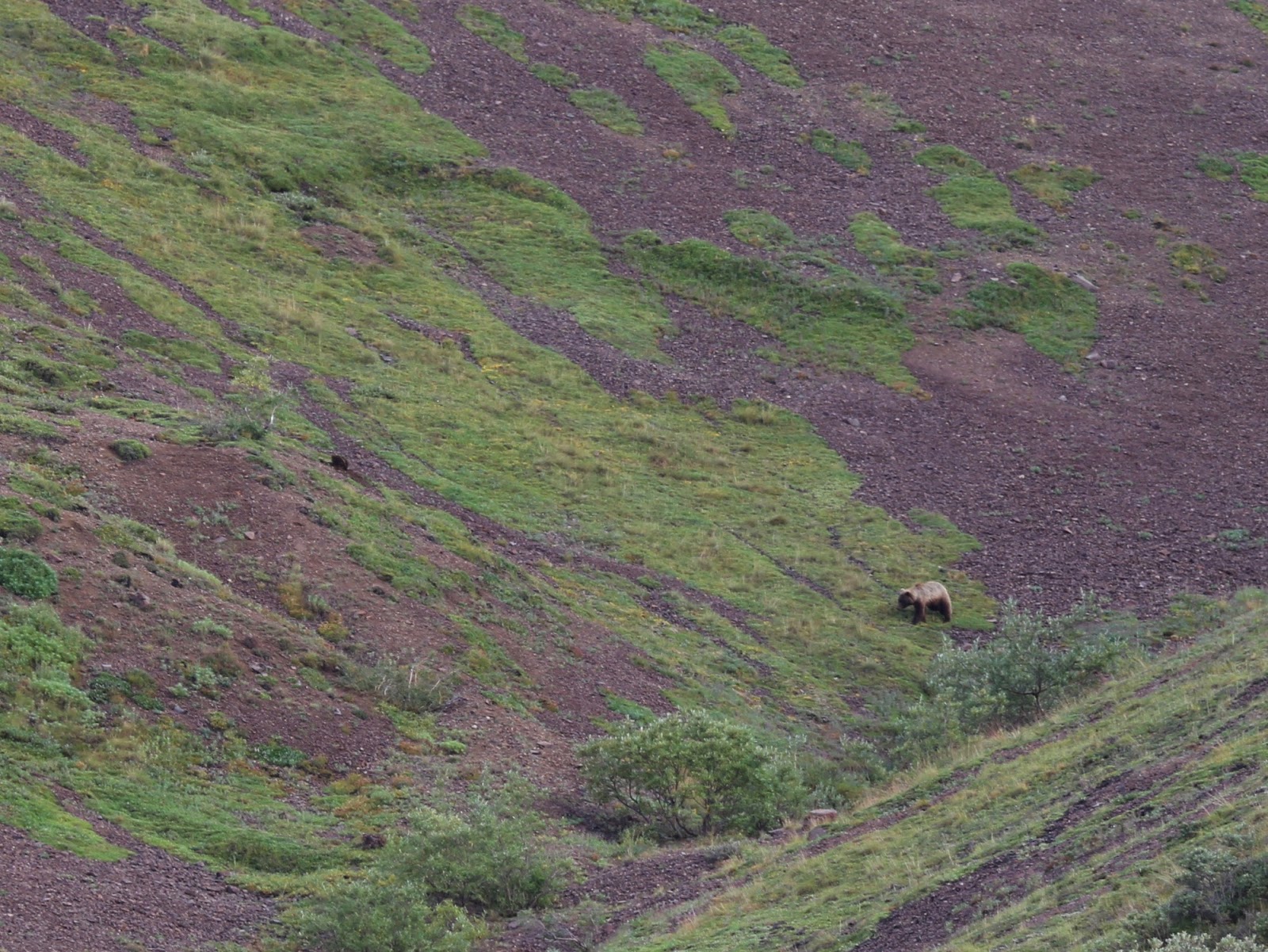 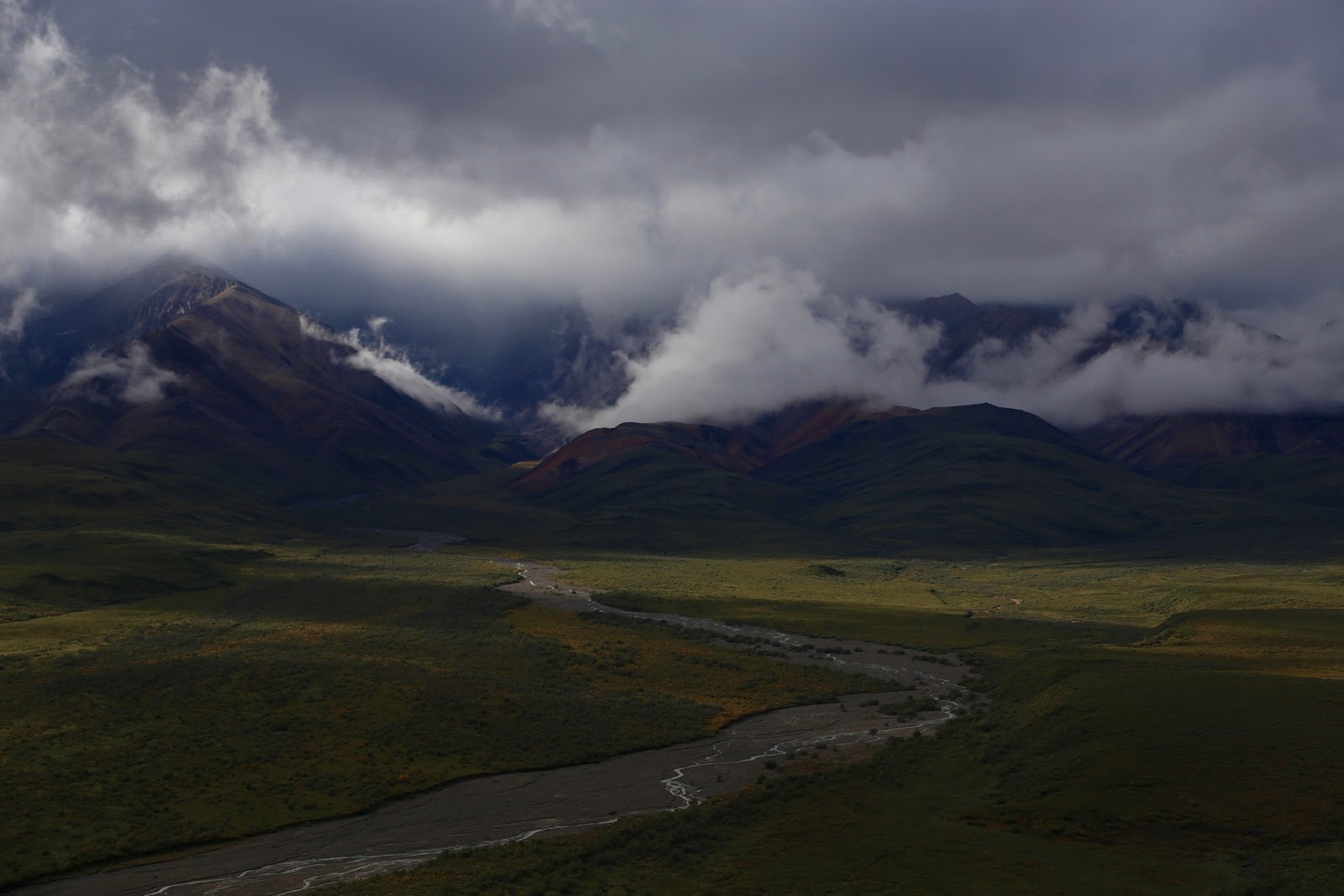 The day had been overcast, but as we rounded the corner nearing the visitor center, we were treated to a view of the Elusive Mount Mckinley, aka Denali. We snapped some quick photos, and enjoyed the view for a few moments before arriving at the visitors center. As we climbed off the bus, the Denali was once again covered by clouds. Lucky us! 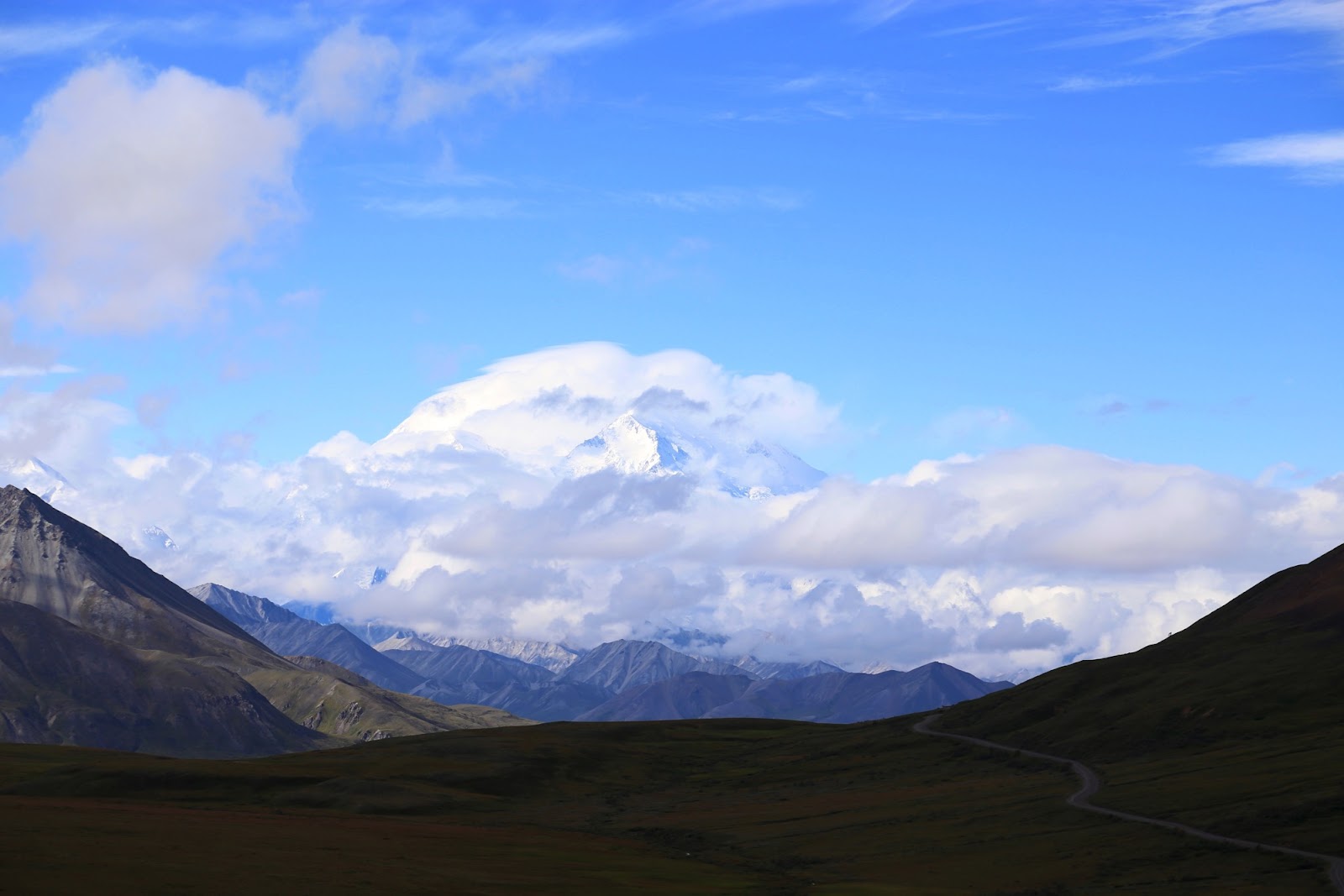 We took courage and did get off the bus. The kids turned in their packets and received their junior Ranger badges, and we perused the displays in the VC. We'd eaten lunch on the bus, so now was a good time to go for a hike. We found a spot to store the car seat at the VC, and extra food. The hike choice was to either go down, and then up on the way back. OR go up first and then down. The kids picked the latter. So up we went. We hiked the Eilsen Alpine trail. Through out all the park they tell you there are no trails, just make your own and hike, but here at the Visitor Center they ask you to only hike on the trails. We found that a little ironic. Again I think this is part of their plan to keep you from exploring any part of the park.

So up we went! We summitted the peaks above the Visitors Center. The view was beautiful! Savannah really wanted to hike off trail as they had been saying all day until we got to the visitor center. So we explored the area up top after we reached the end of the "maintained trail" and in the end we discovered our own path down back to the visitor center. The kids had a great time picking the path down and traversing the landscape. We stopped for a while to pick a bag blueberries. Had the Hunsaker family not taken us the week before, we would not have known the bushes we were walking on were blueberries, as they are hidden under the brush. Once we arrived at the bottom, some other tourists told Calvin they watched us walk the whole way down. Which was funny, cause it took us at least 45 minutes. 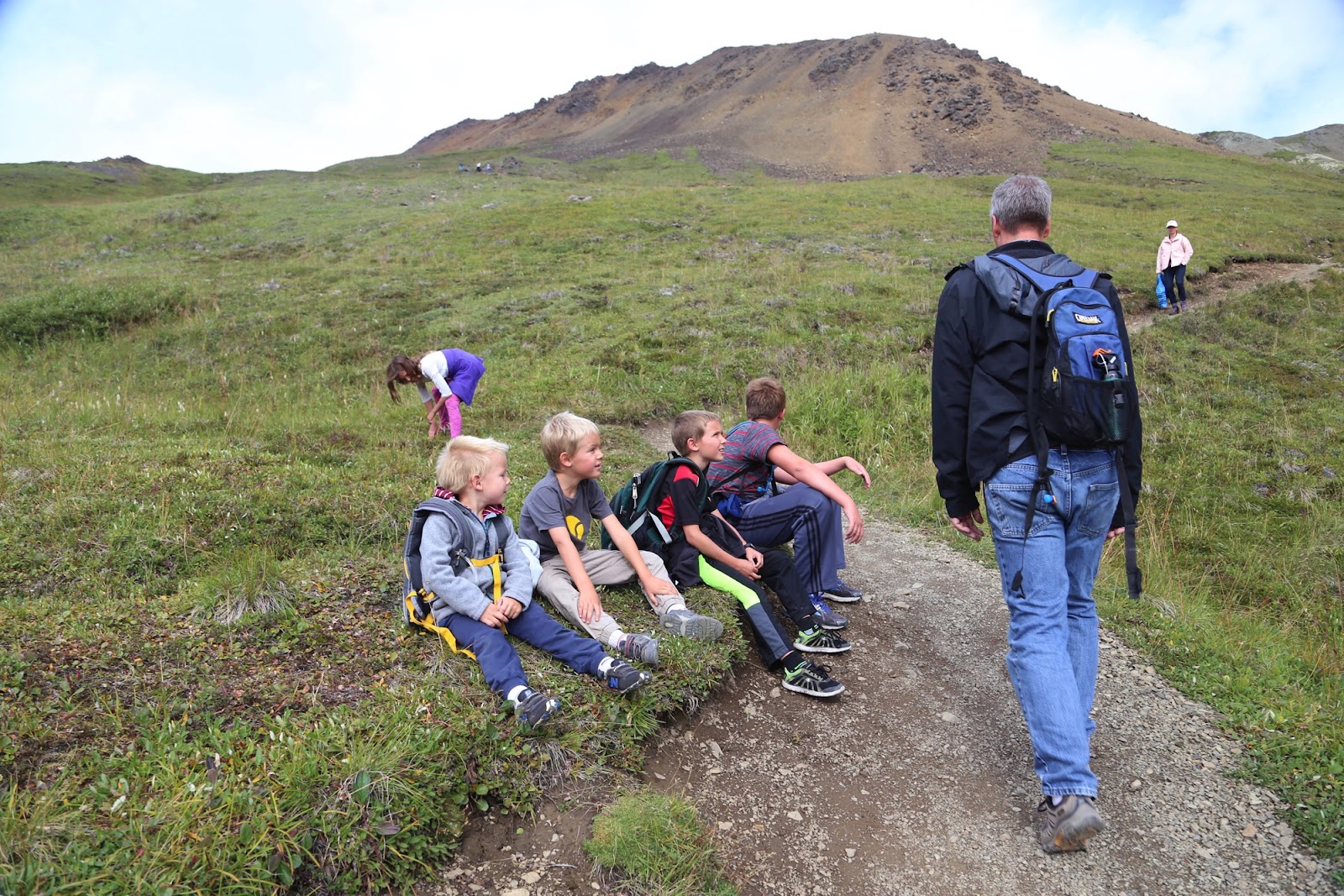 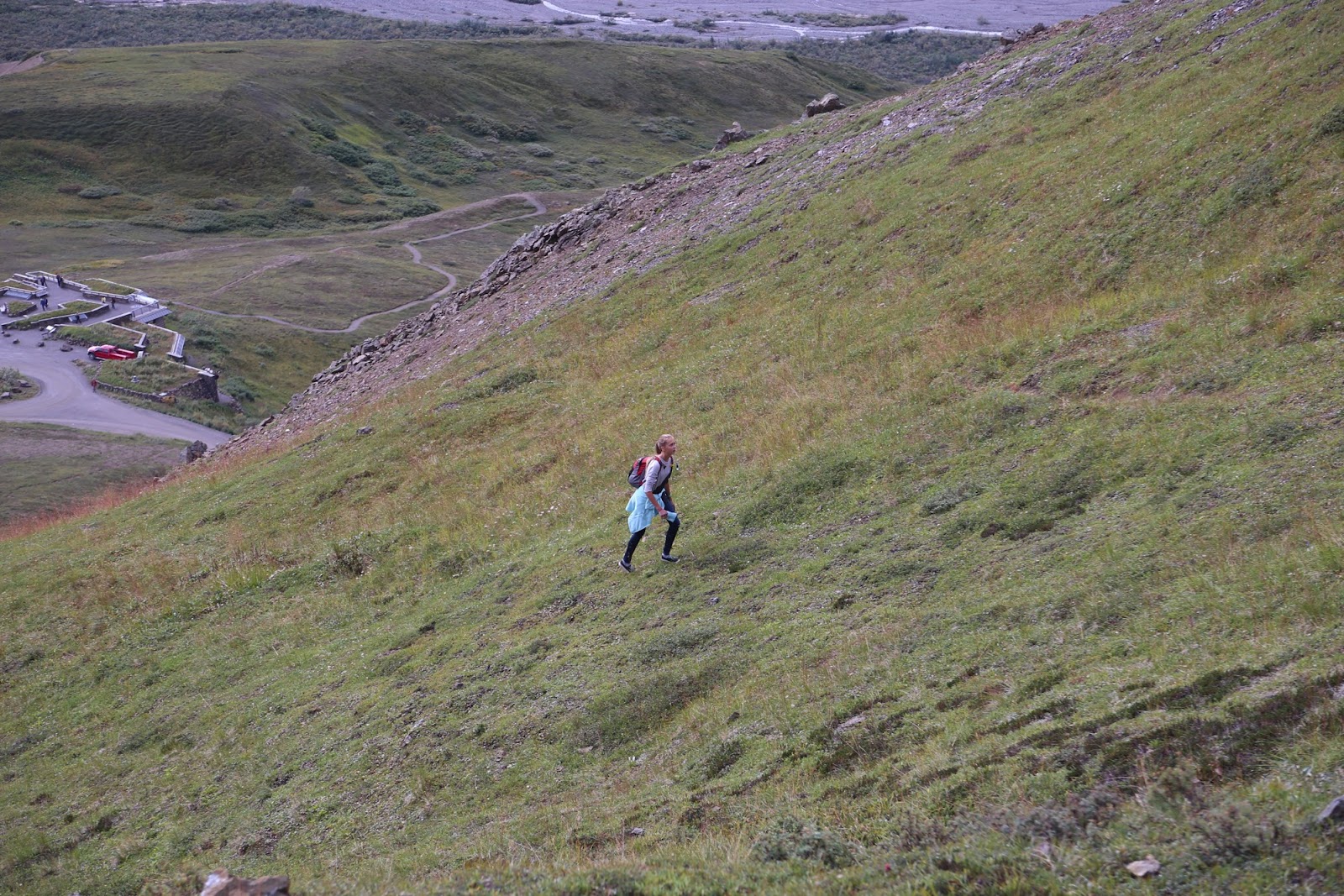 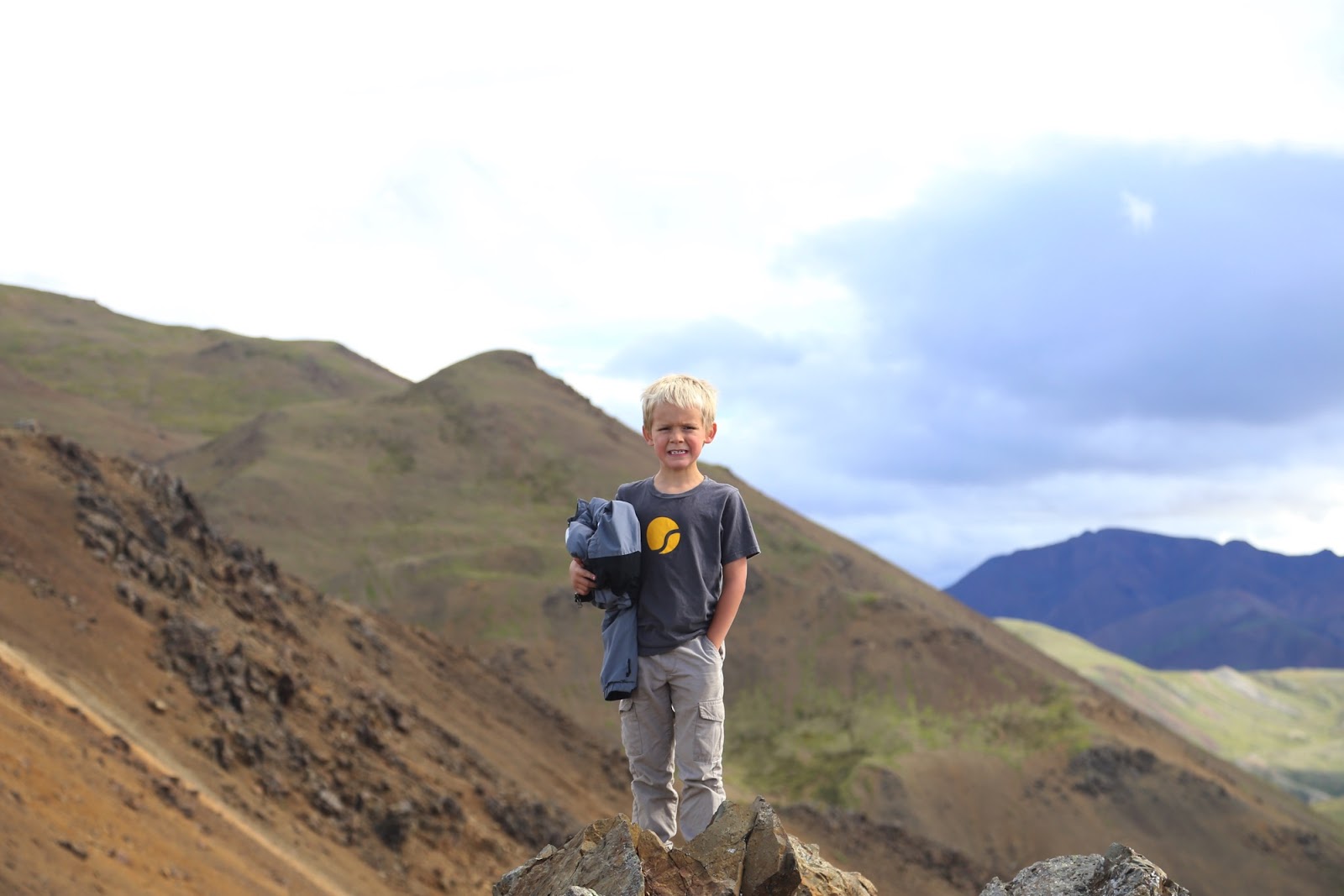 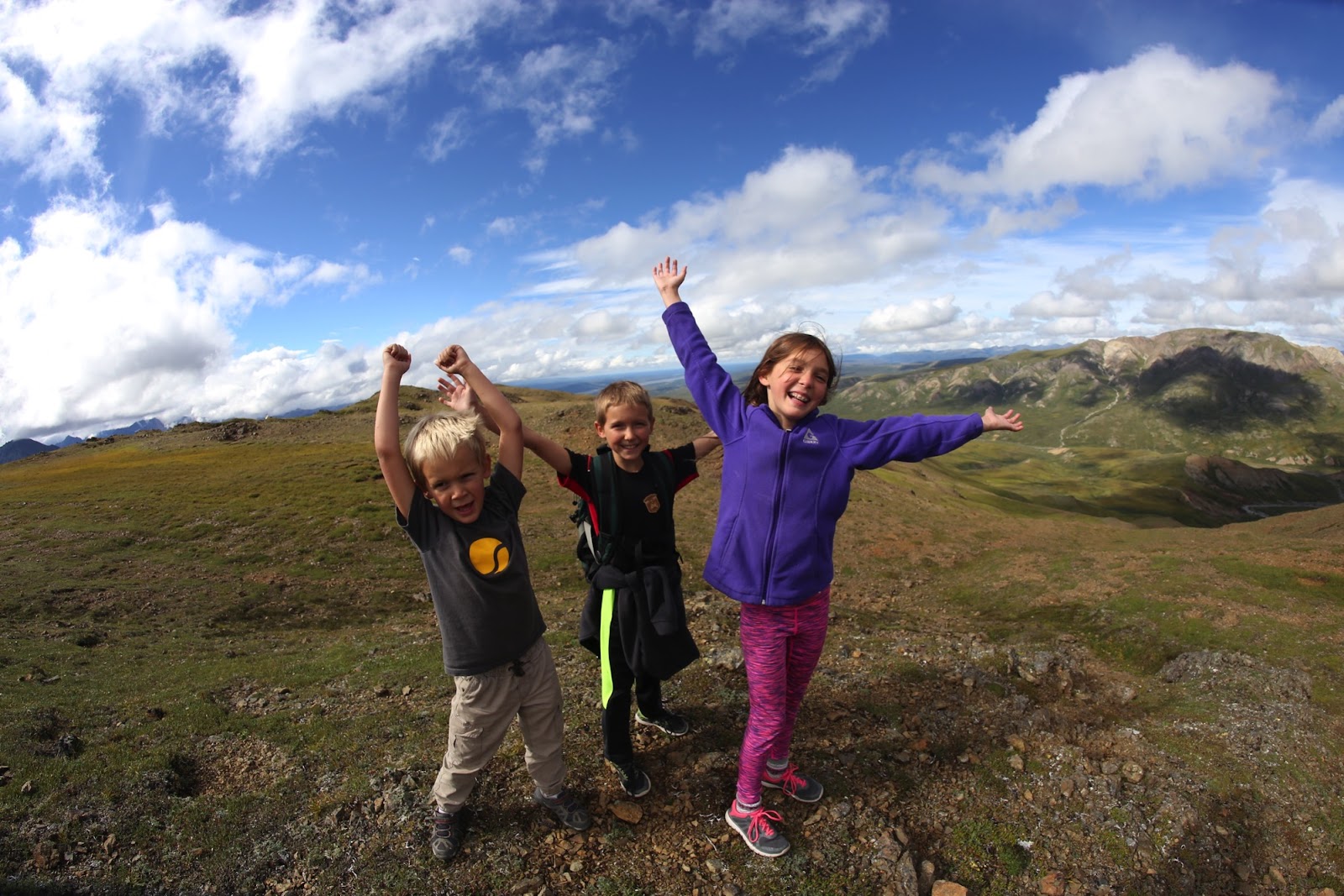 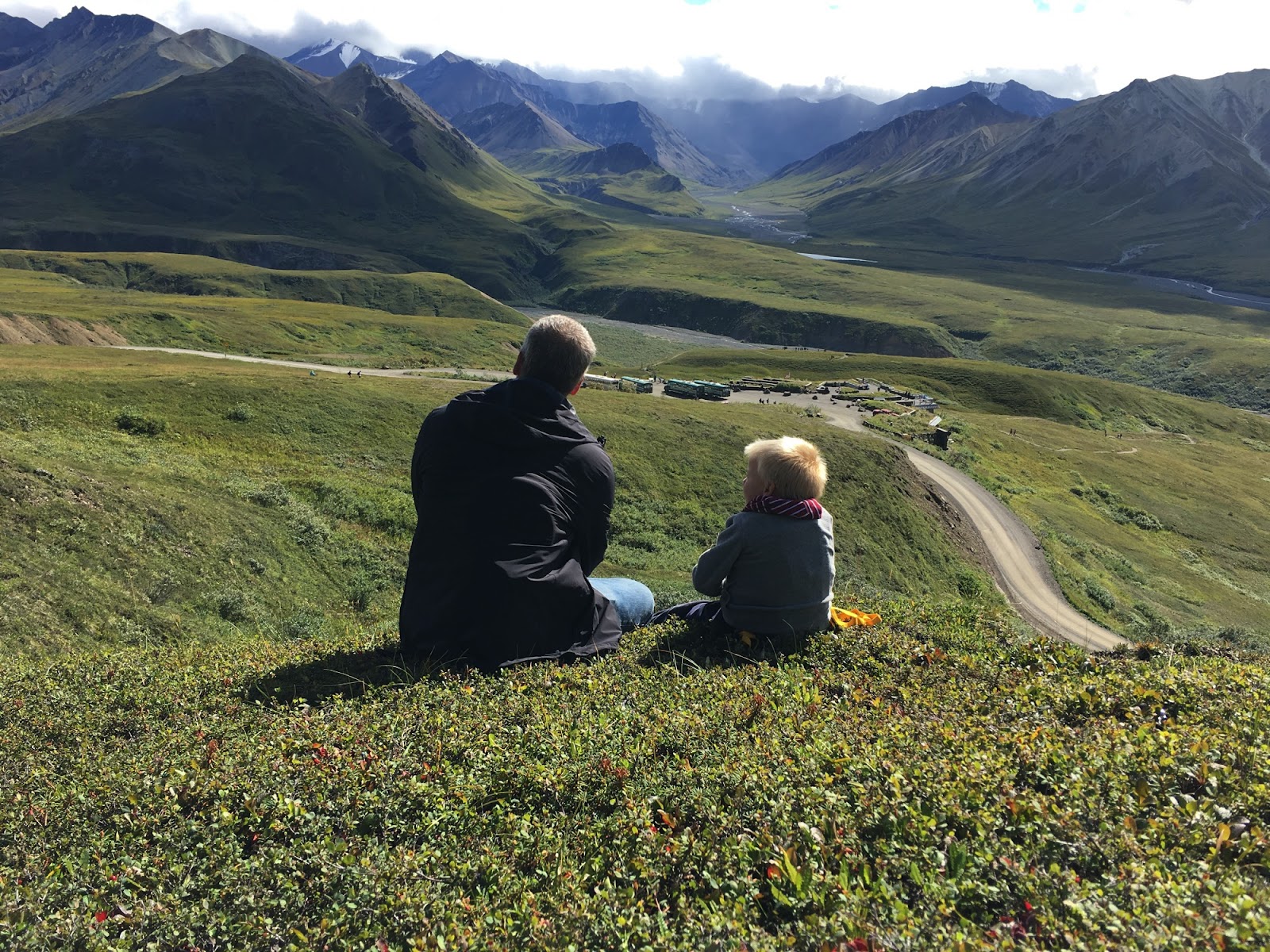 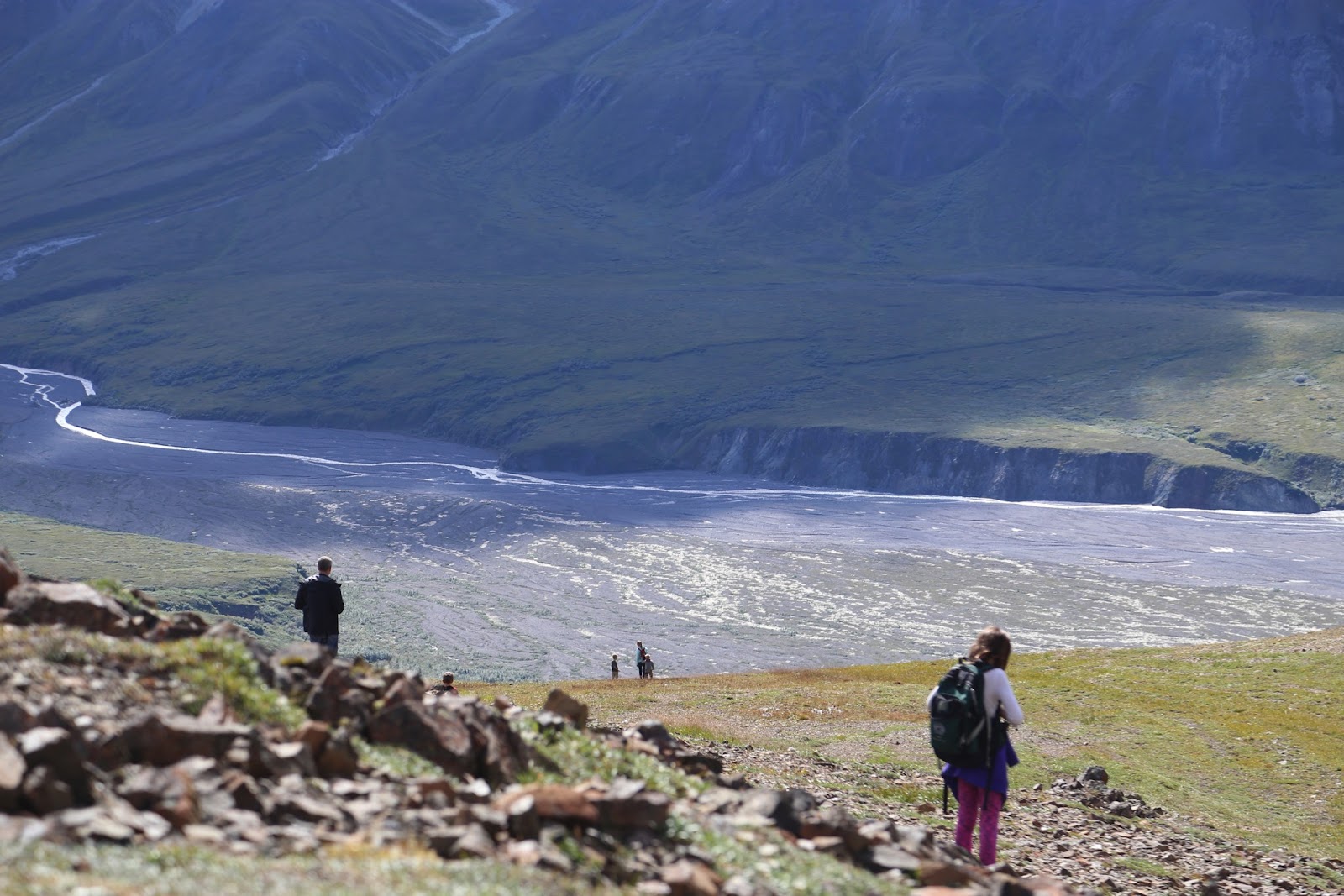 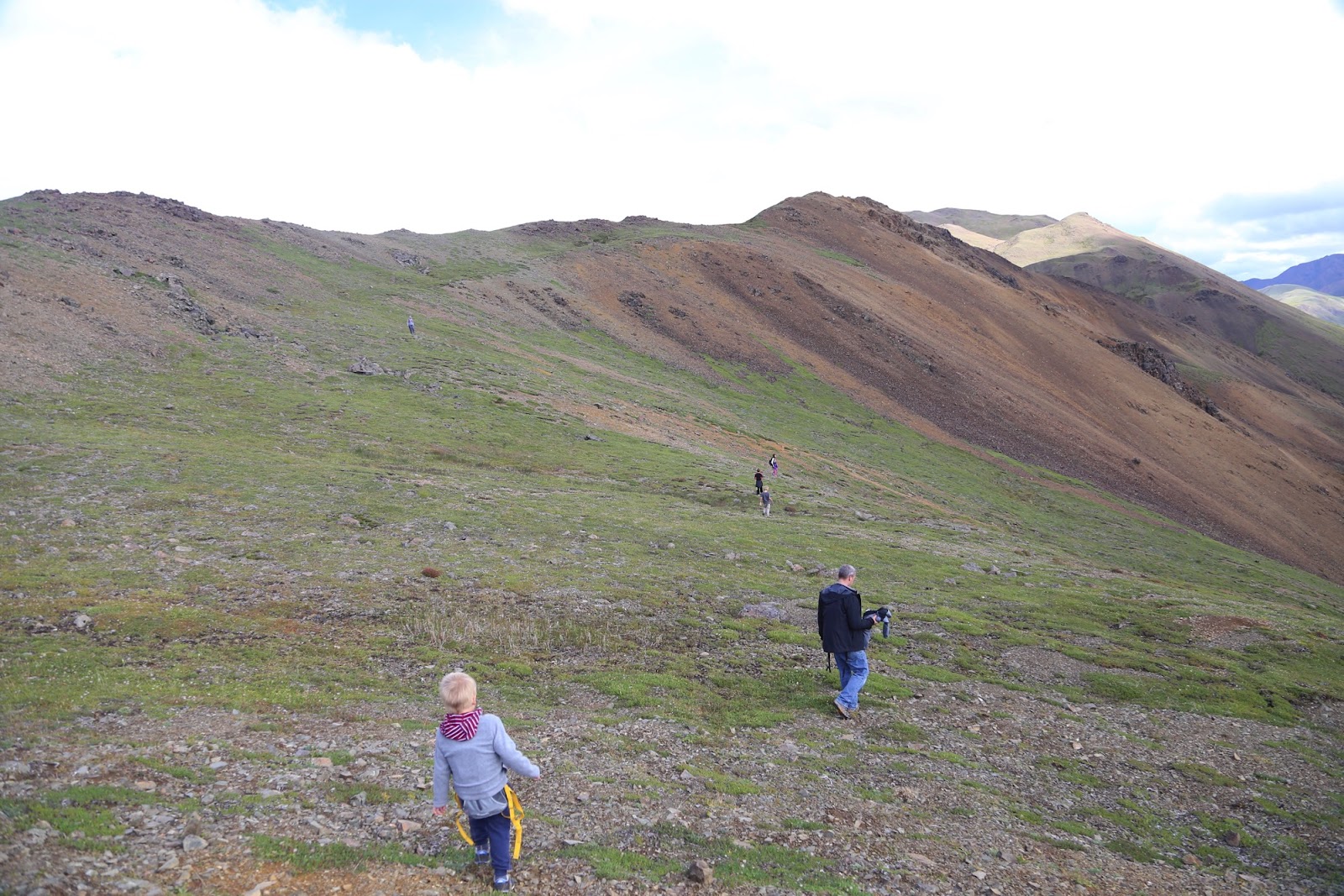 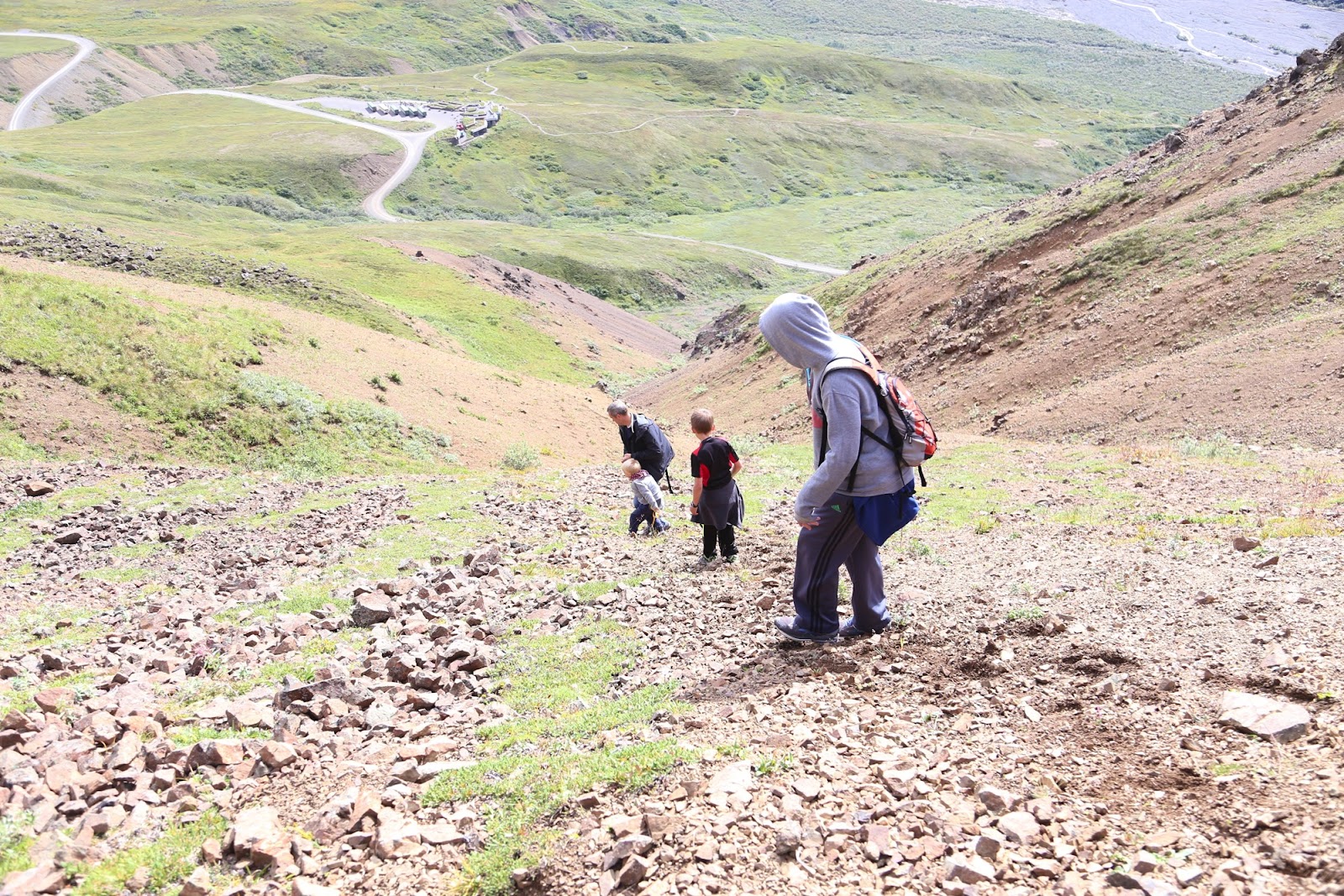 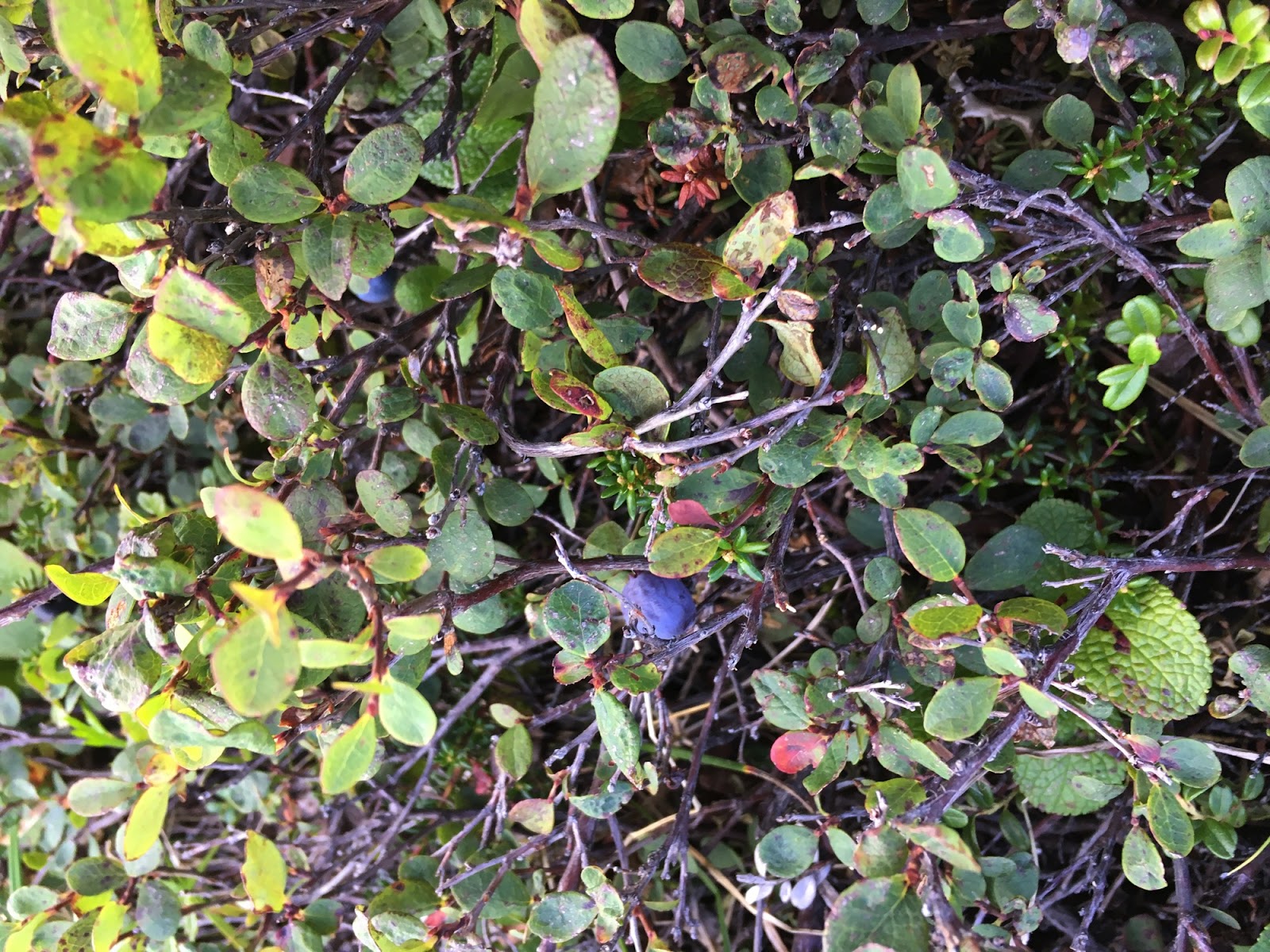 David talked to the staff organizing busses and it worked out, we were the last to board the next bus leaving in 7 minutes. Just enough time to use the potty's before our 3 hour bus ride back. Of course since we were the last on the list for that bus, we were the last to board, and had to ask people if they could make room for us to sit as a family. It worked out in the end and we were all together. On the way back we stopped more to pick up hikers, but we only had a few empty spots so we could only take a few with us.

We also ended up seeing a few more bears. A mama Grizzly and 2 cubs eating fairly close to the road, but down in a ditch. That, I would say, was a good bear sighting. As they were close enough to see with our own eyes. No need for binoculars. 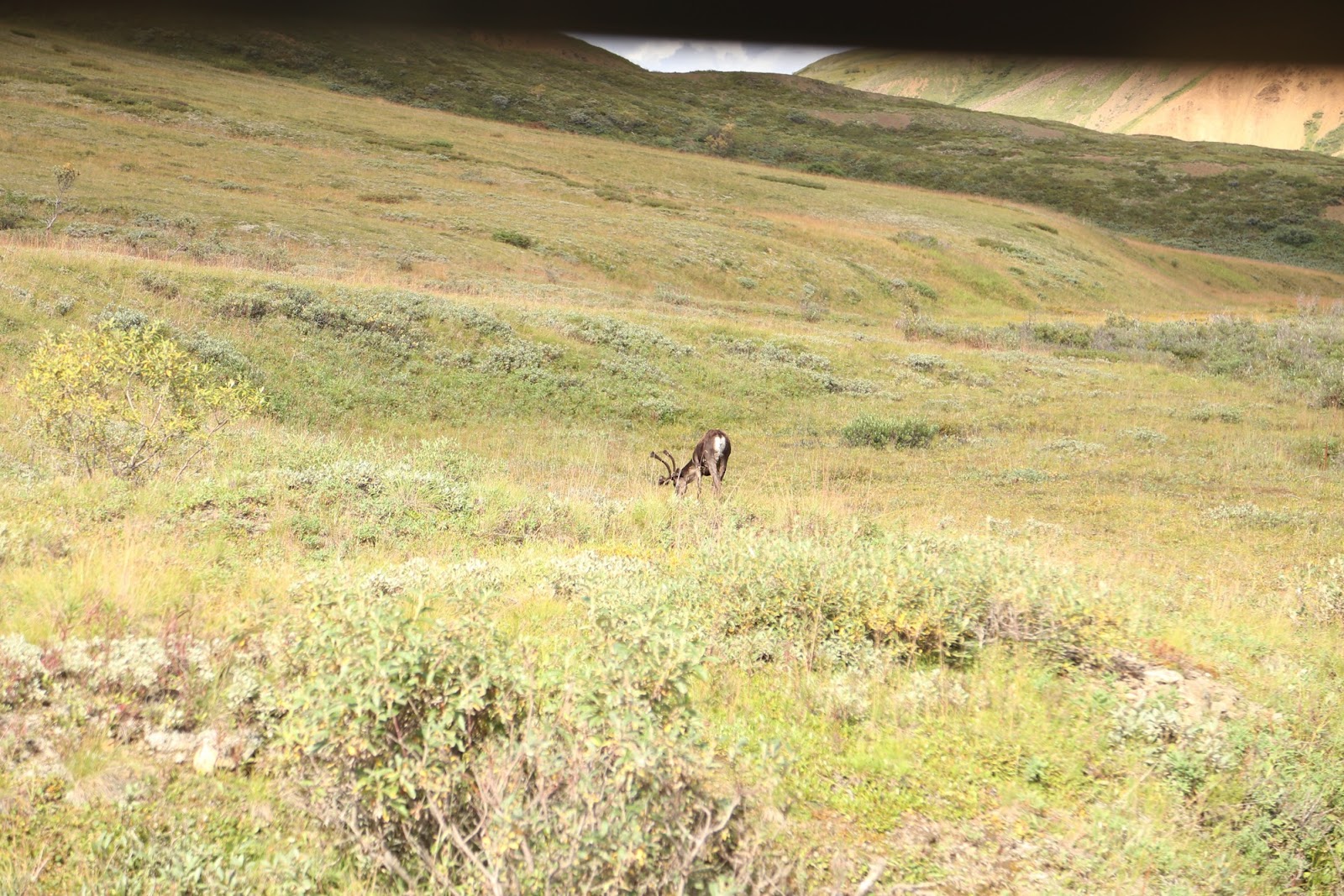 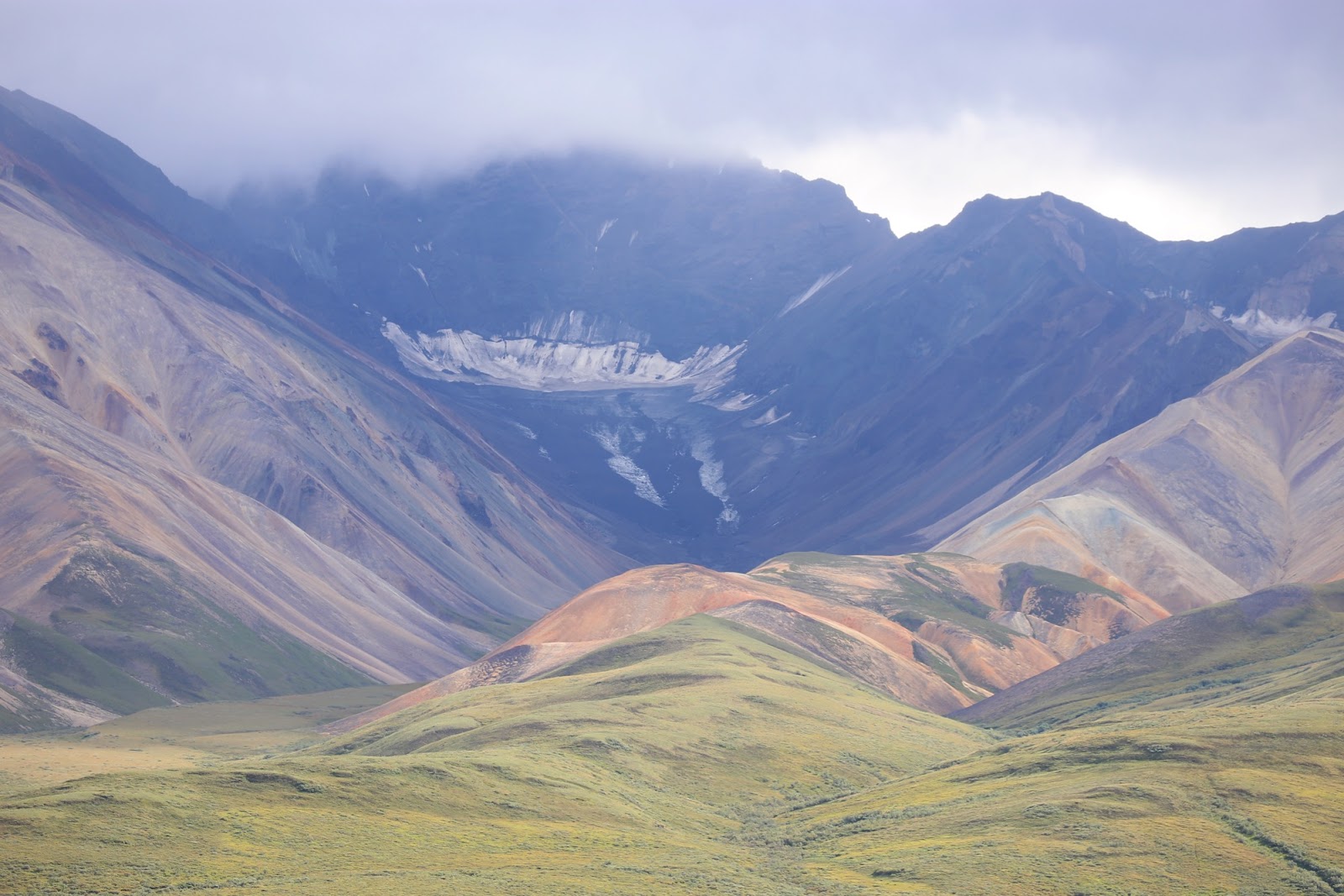 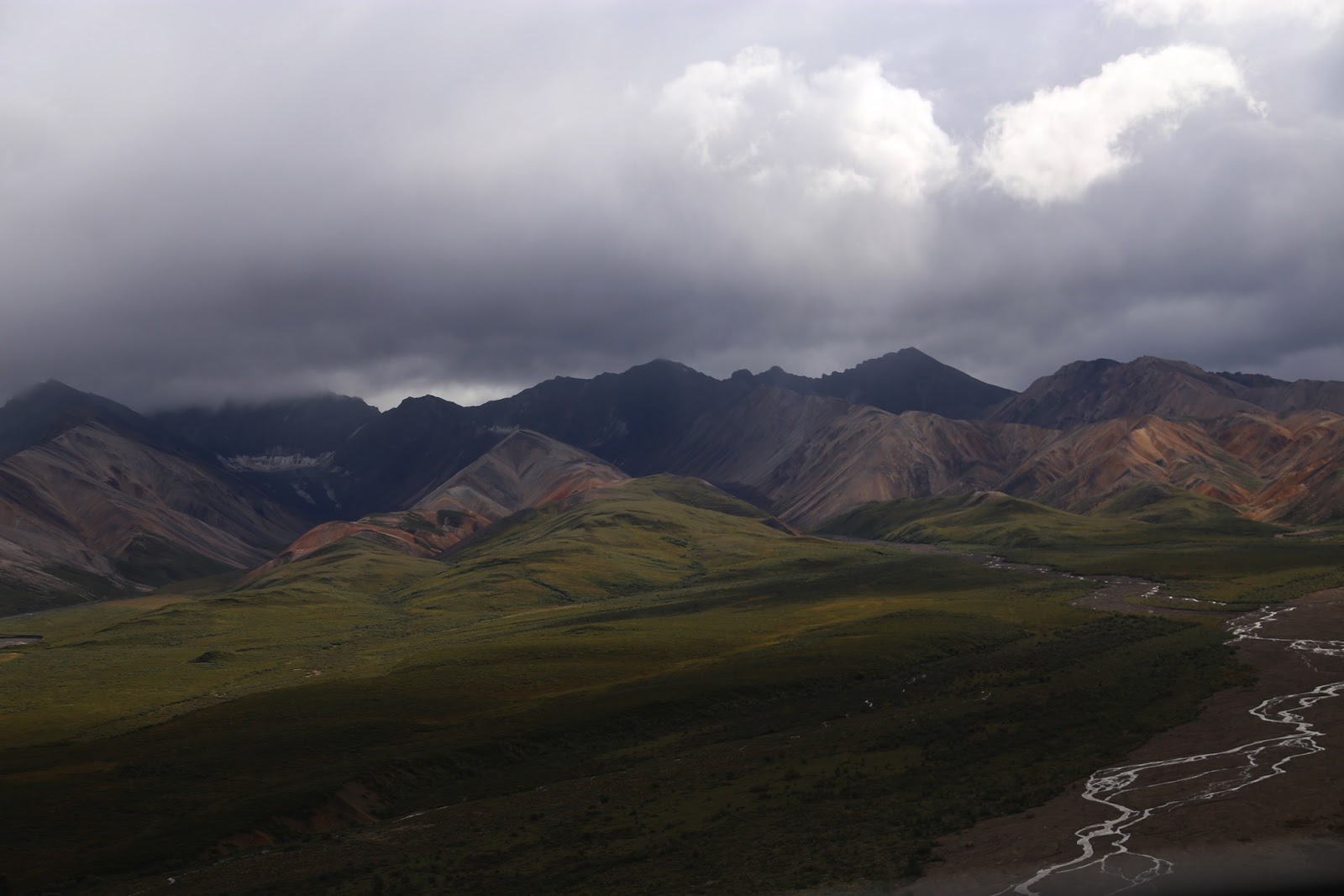 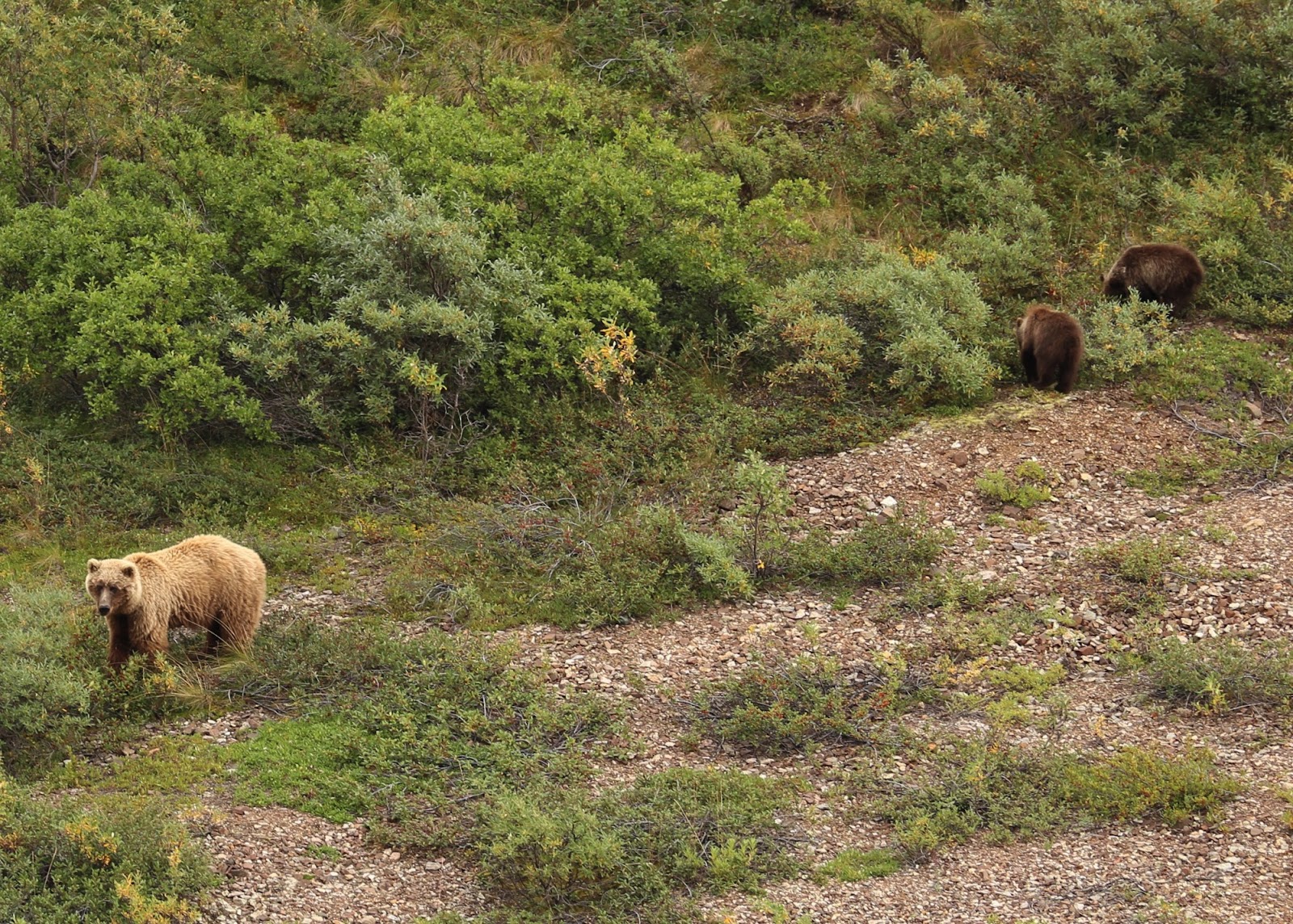 In order to camp at the Teklanika campsite you have to sign up to stay 3 nights. In the end we only stayed 2. The morning after our full day on the bus, it was drizzling, so after breakfast we packed up and decided to head out early. This would give us a little extra time to spend in the Yukon, in Kluane National Park. But first, breakfast... Pancakes with Blueberry syrup from the blueberries we picked on our hike. Yum! 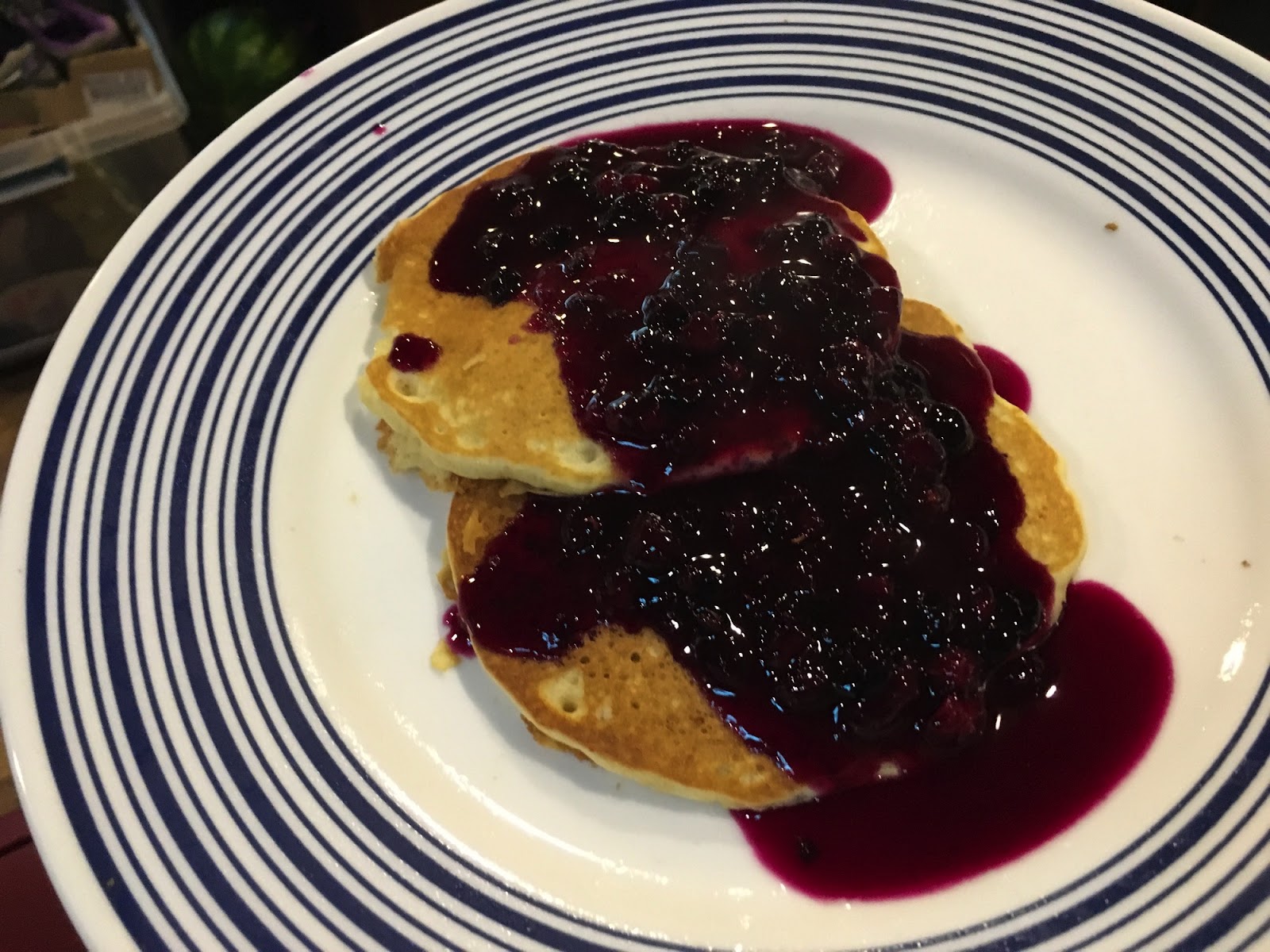