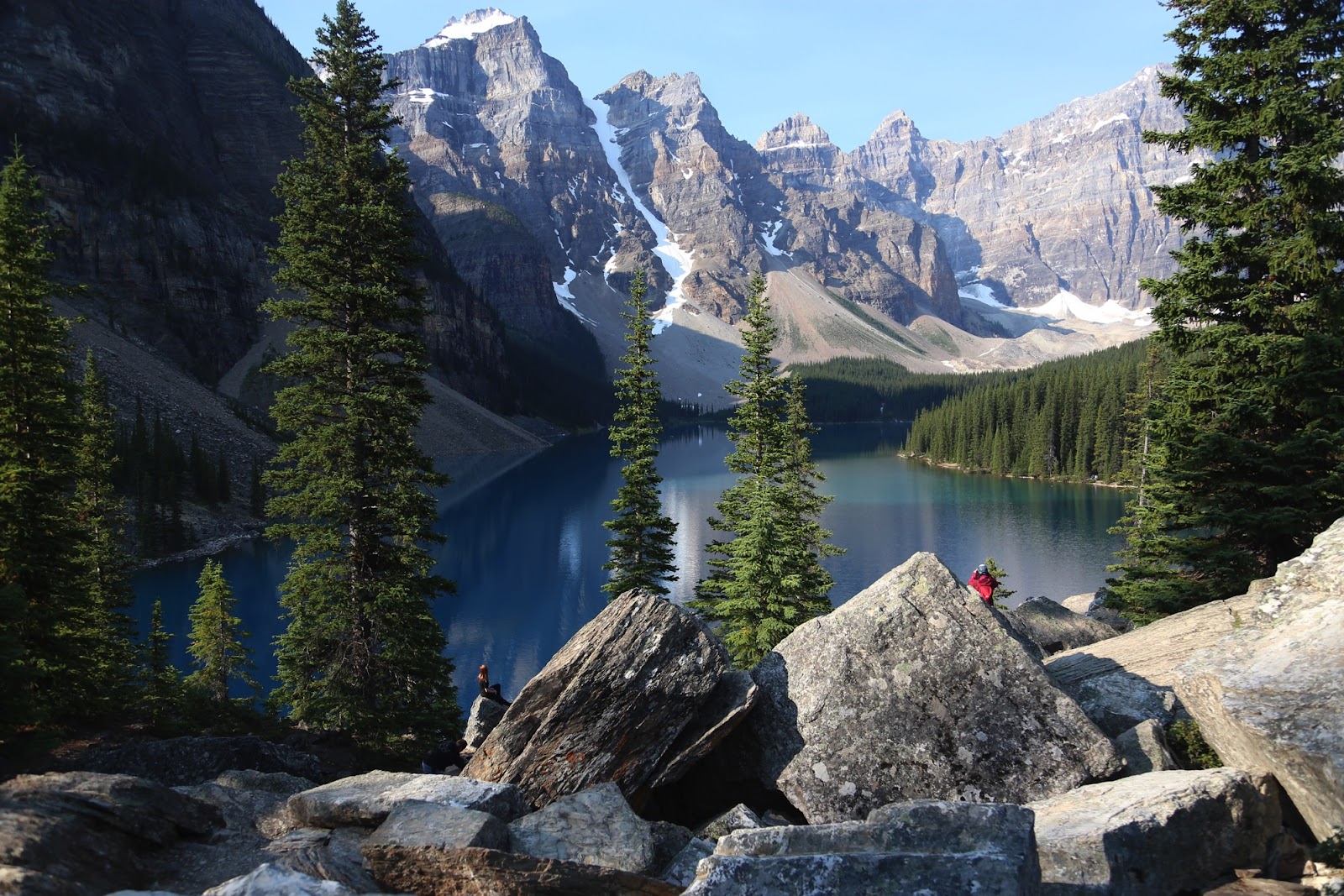 Talk about amazing scenery! Banff is gorgeous! Driving from Waterton to Banff was pretty easy. We made a short stop 30 mins from Waterton at a Unesco World Heritage Site of Head Smashed in Buffalo Jump. This was interesting to learn about. This site was used by Native Americans to strategically plan together to lure the large herd of Buffalo to a stampede and direct them towards the cliff to run them off. This required great planning, preparation, and perfect conditions to achieve. This site was used thousands of years ago, and multiple times for this purpose. They found several feet deep of leftover bones. It was very interesting to learn about. On site they have a great museum and you can walk the cliff edge to view the beautiful landscape.

Just south of Calgary we stopped at Walmart and the Real Canadian Superstore for a quick food restock, and of course to pick out some true Canadian snacks. A trip to Canada requires a few Mr. Big candy bars for me!

After we left the Calgary area you could see the mountains in the distance and they just went on forever! From North to South as far as the eye could see, and not just one row of peaks. Row after row of peaks. It was a sight to behold. It's an easy drive from Calgary, which is why the Banff area of lodging, and camping is so huge! There is a massive highway to travels through the area. Our campsite alone had about 1000 spots. We sadly had to say goodbye to the Miller family back in Cardston after the Temple, but the Despain family was still hanging in there with us! While we checked into our campsite, they headed to their little house they rented a few miles down the road in town.

The next morning we got an early start and headed up to a popular spot in the area. It's about an hour drive to the Lake Louise area, and up to Moraine lake. Once upon a time this beautiful Lake was printed on the back of the $20 Canadian Bill. We climbed the pile of rocks near the parking area for the best view. The hike is called the Rockpile. At this end of the lake, 10 beautiful peaks can be seen. And the water is a perfect blue. It was beautiful. Which explains all the people there! Even at 8:30am there were already hundreds of people there, and finding parking was a problem. I don't know how much the 150 years of Canada celebration this summer is affecting park visitors, but it was crowded! National Park entrance is free all across Canada this year. But the beauty in Banff is definitely worth paying an entrance fee to see. The entire area is spectacular. So many lakes and mountains to see! 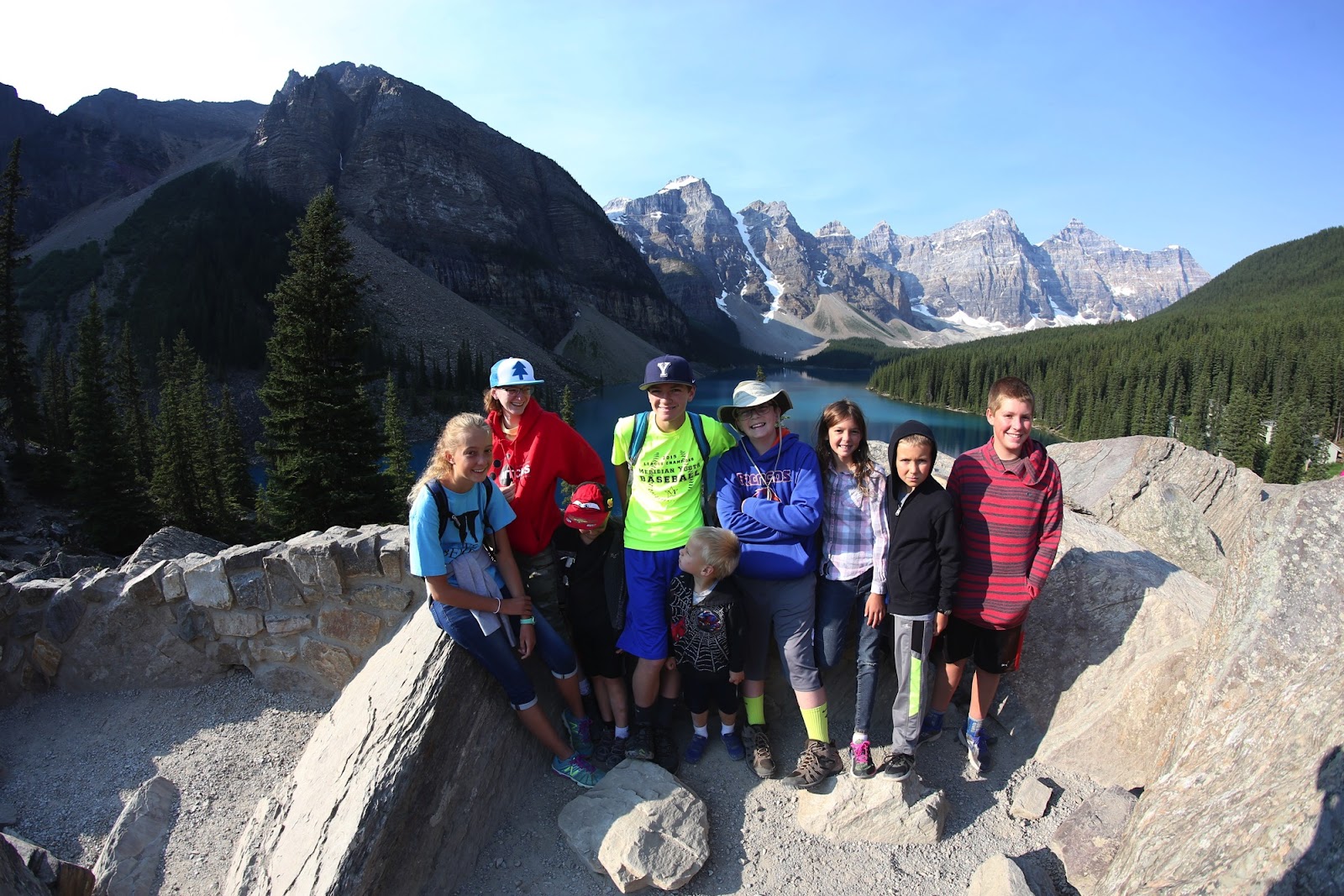 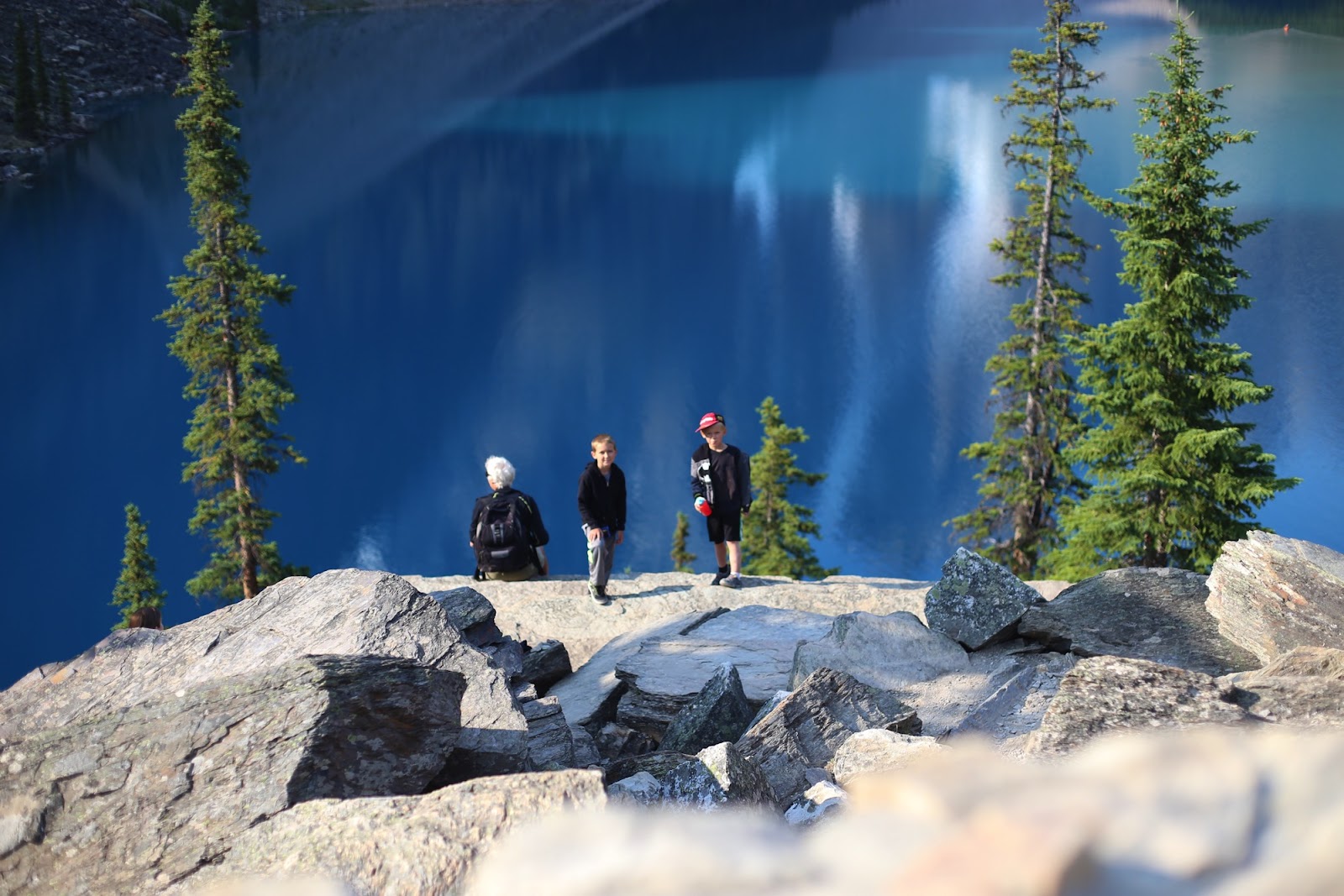 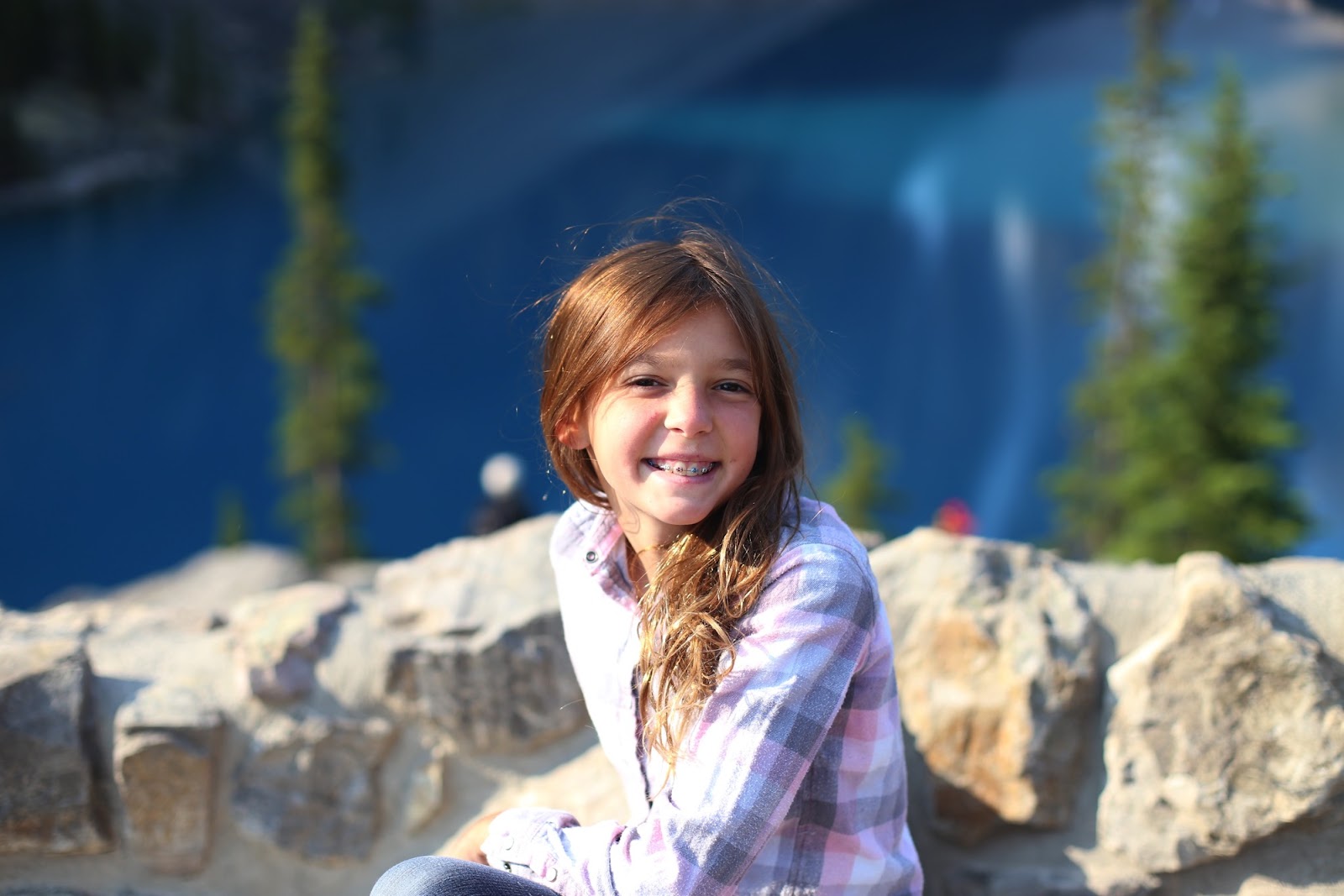 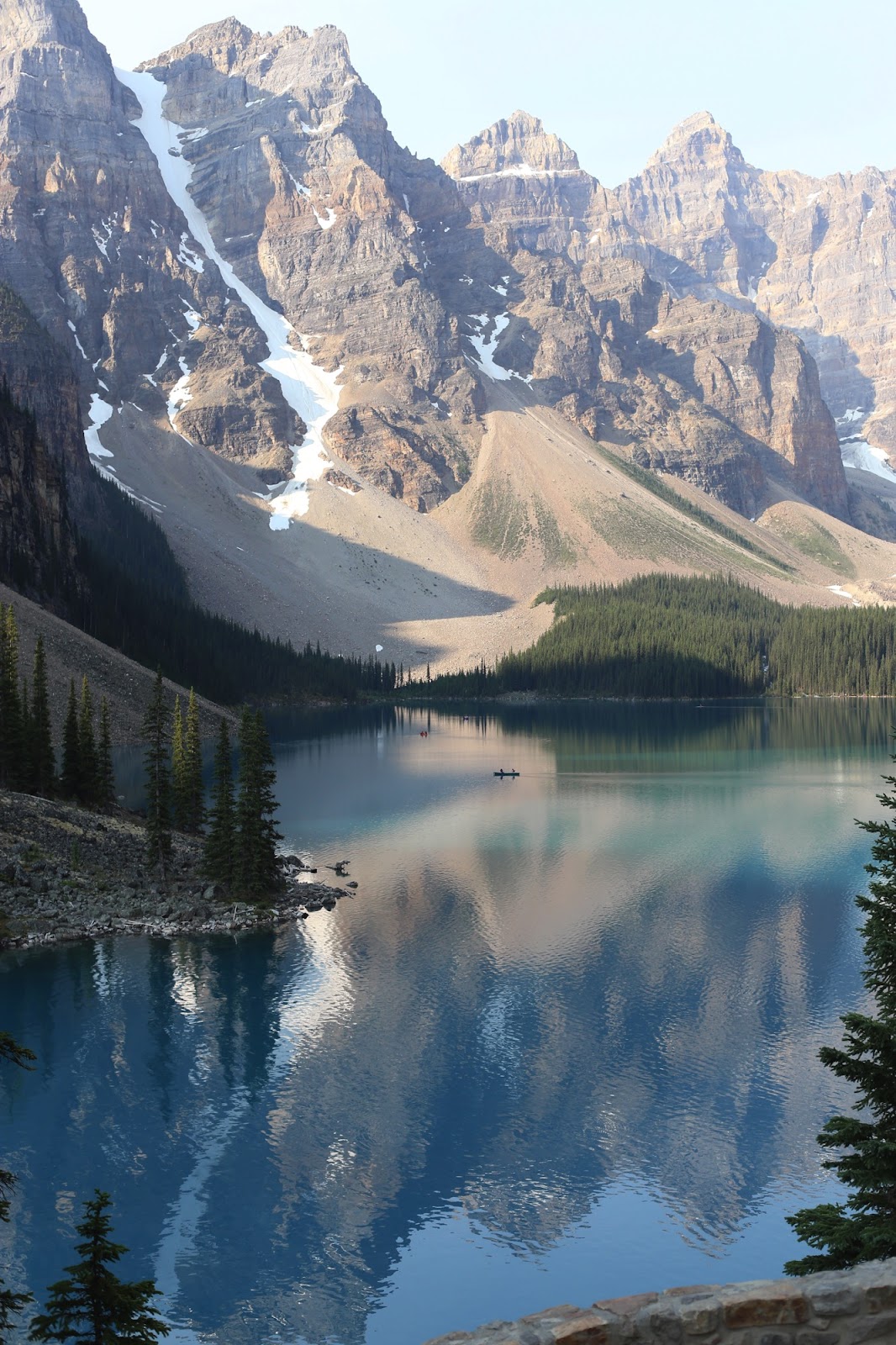 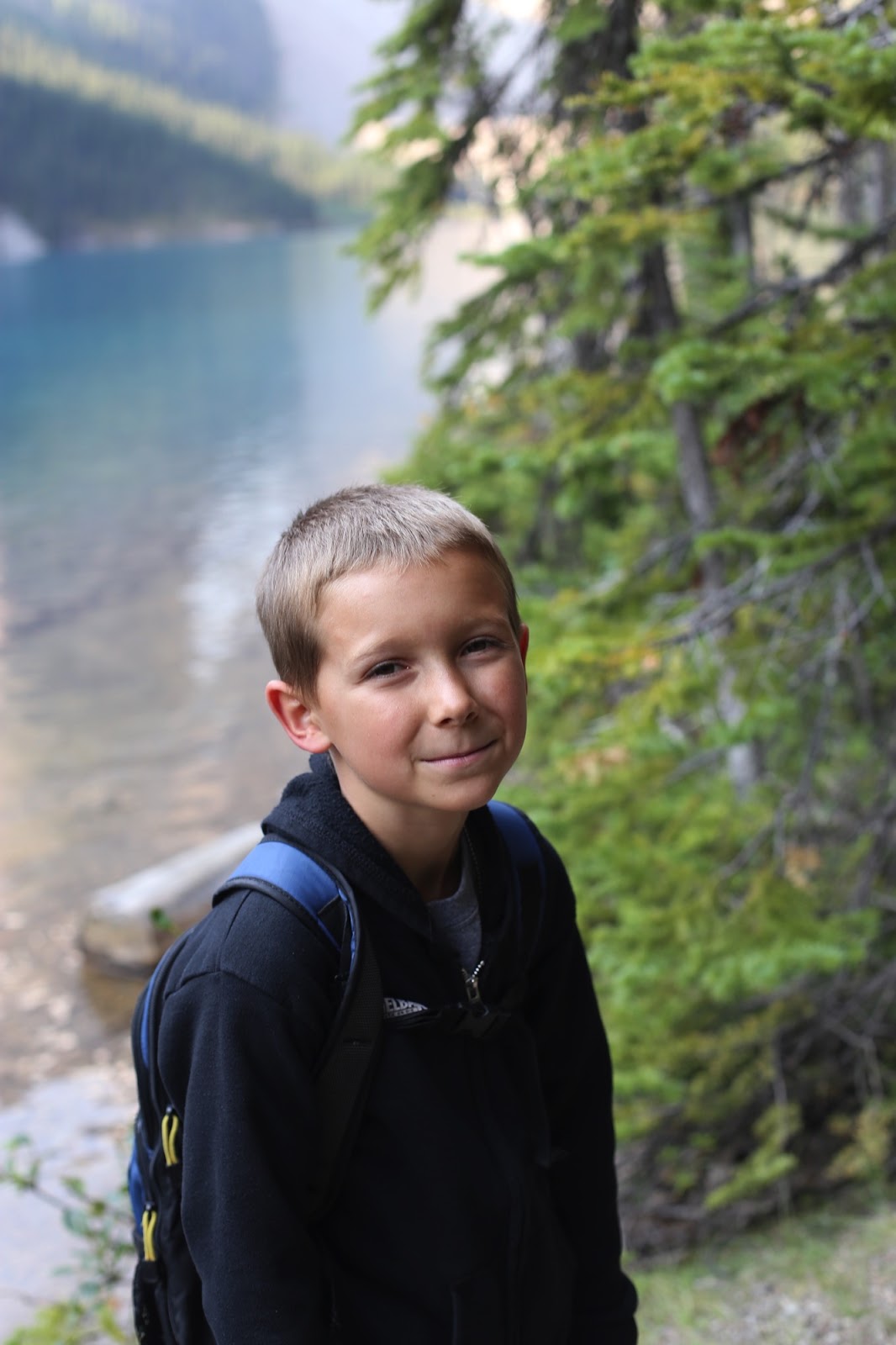 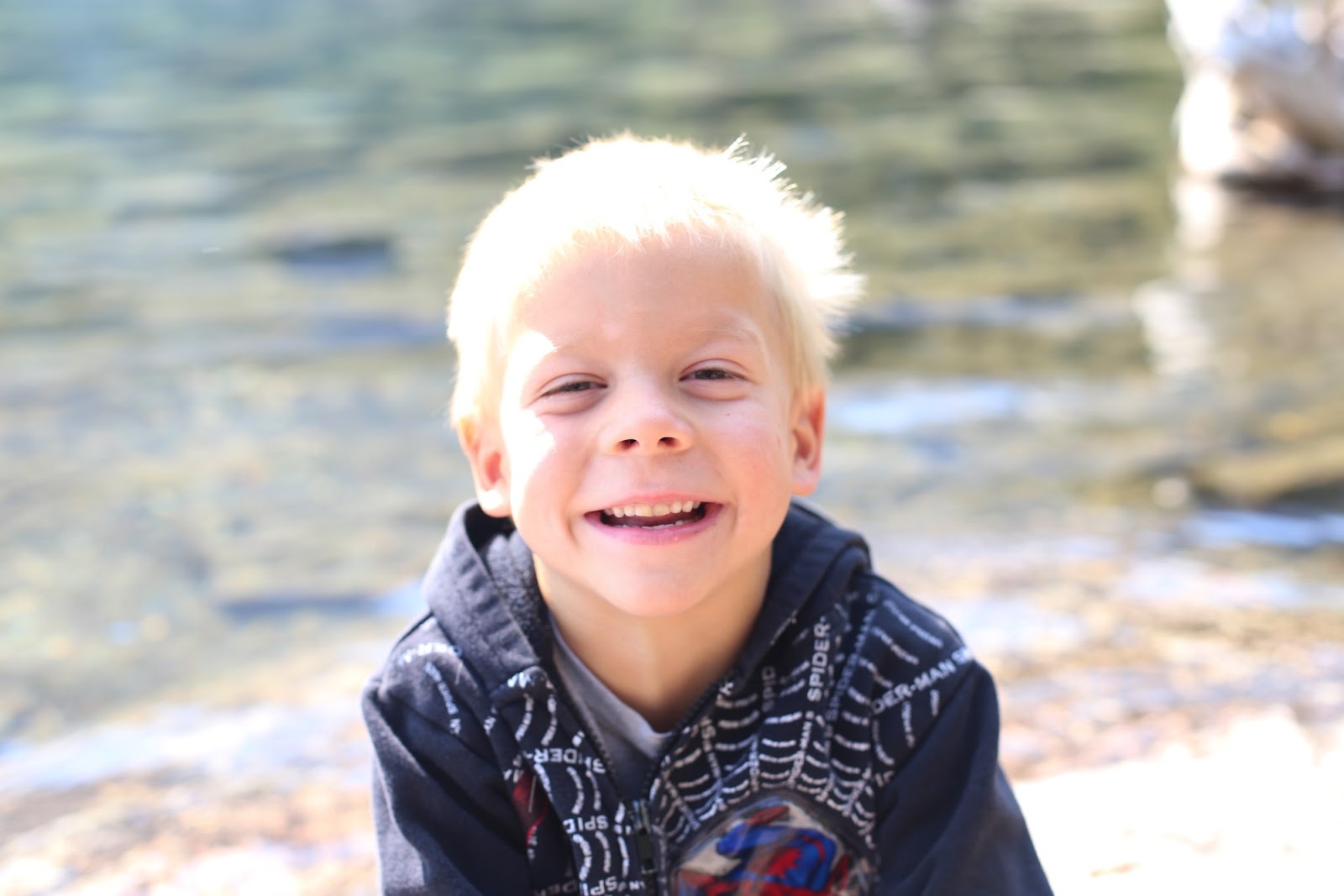 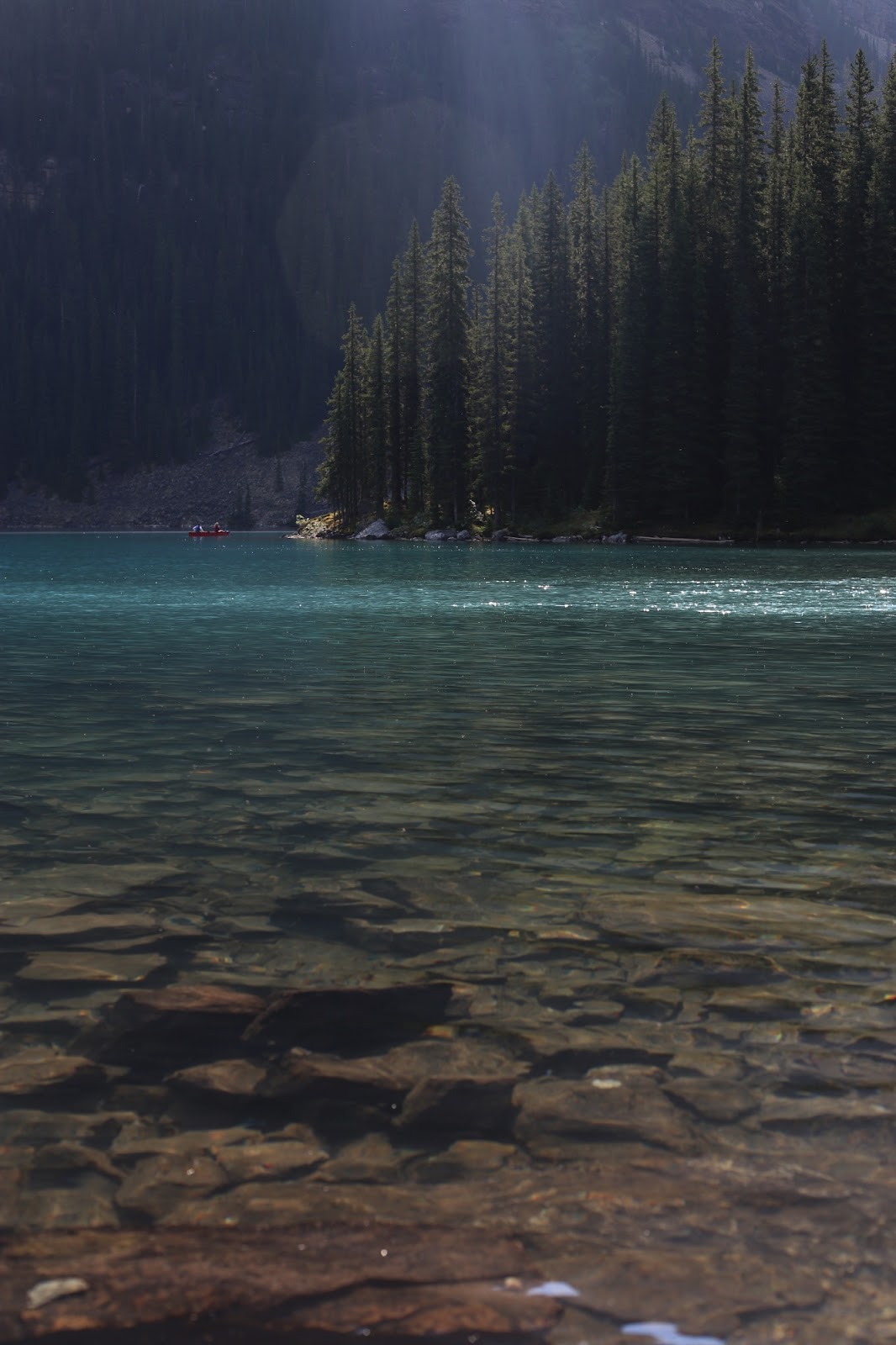 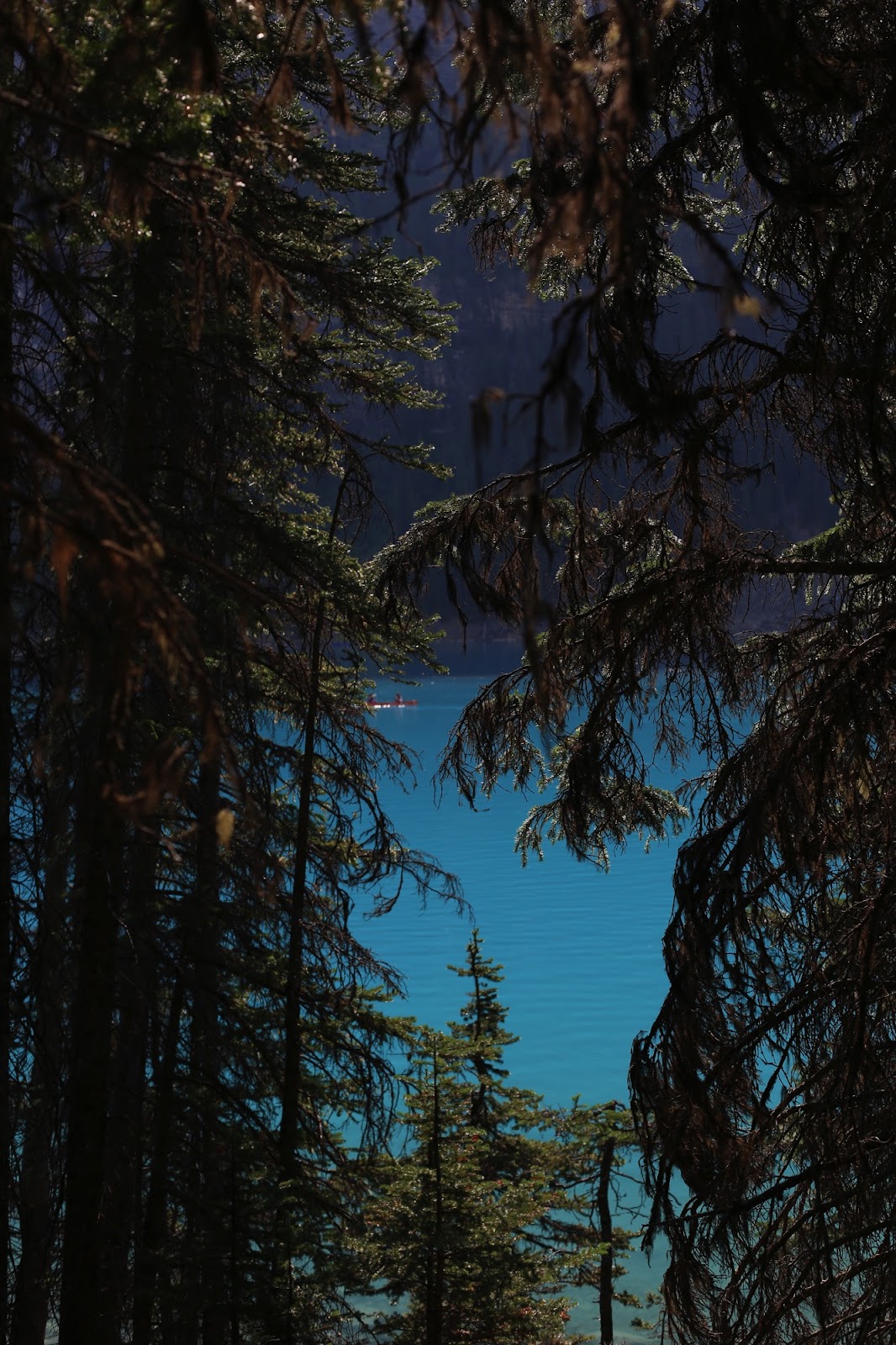 After a short hike around Moraine lake's shoreline, we headed off to nearby Yoho National Park to Emerald Lake. The 40 minute drive follows the gorgeous mint green Kicking Horse River thru it's rock basin. How spectacular it must look in the spring as it carries all the snow melt away. Limestone washes into the river to create it's beautiful color. After admiring Emerald lake from it's shoreline we did a short hike to a nearby waterfall. 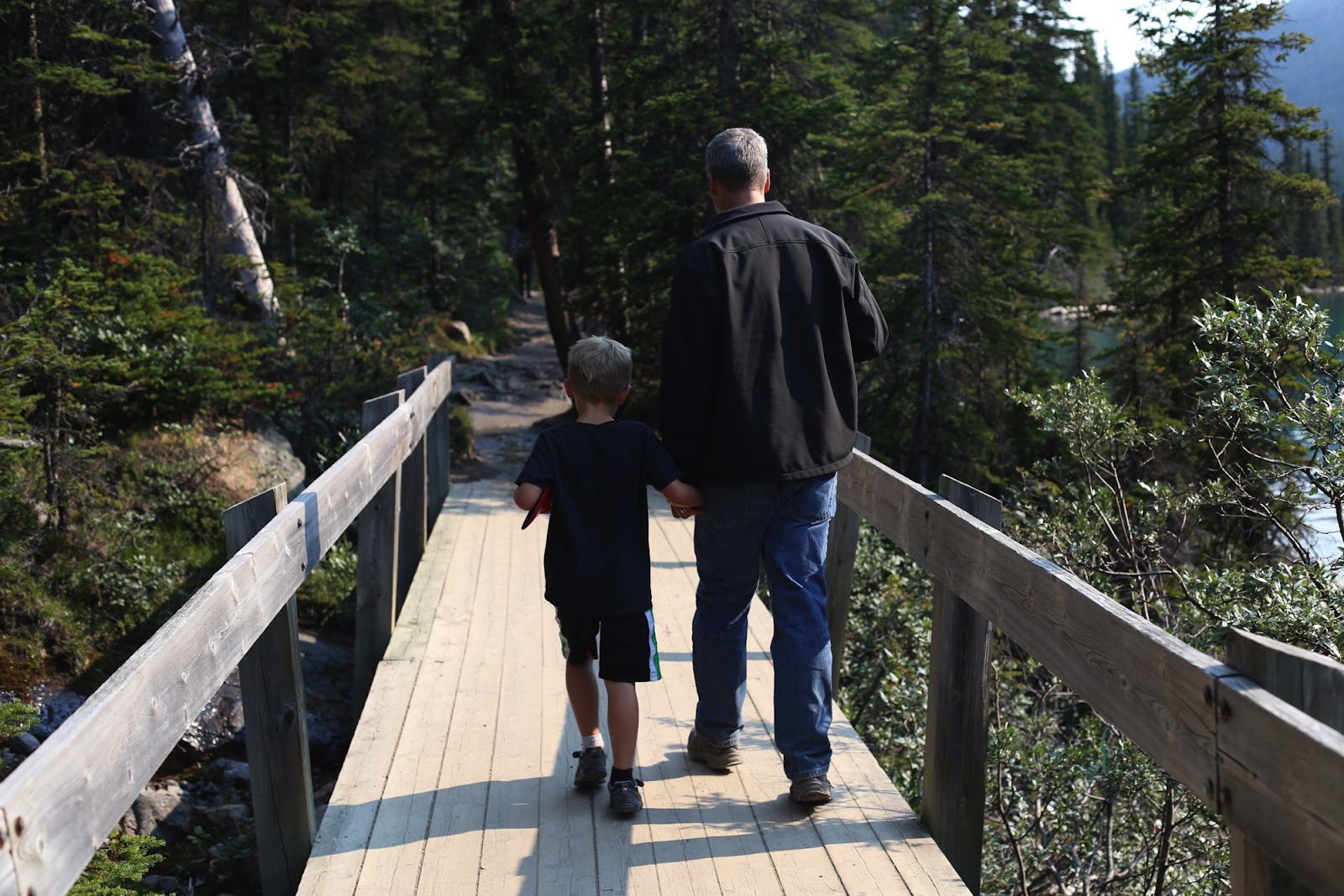 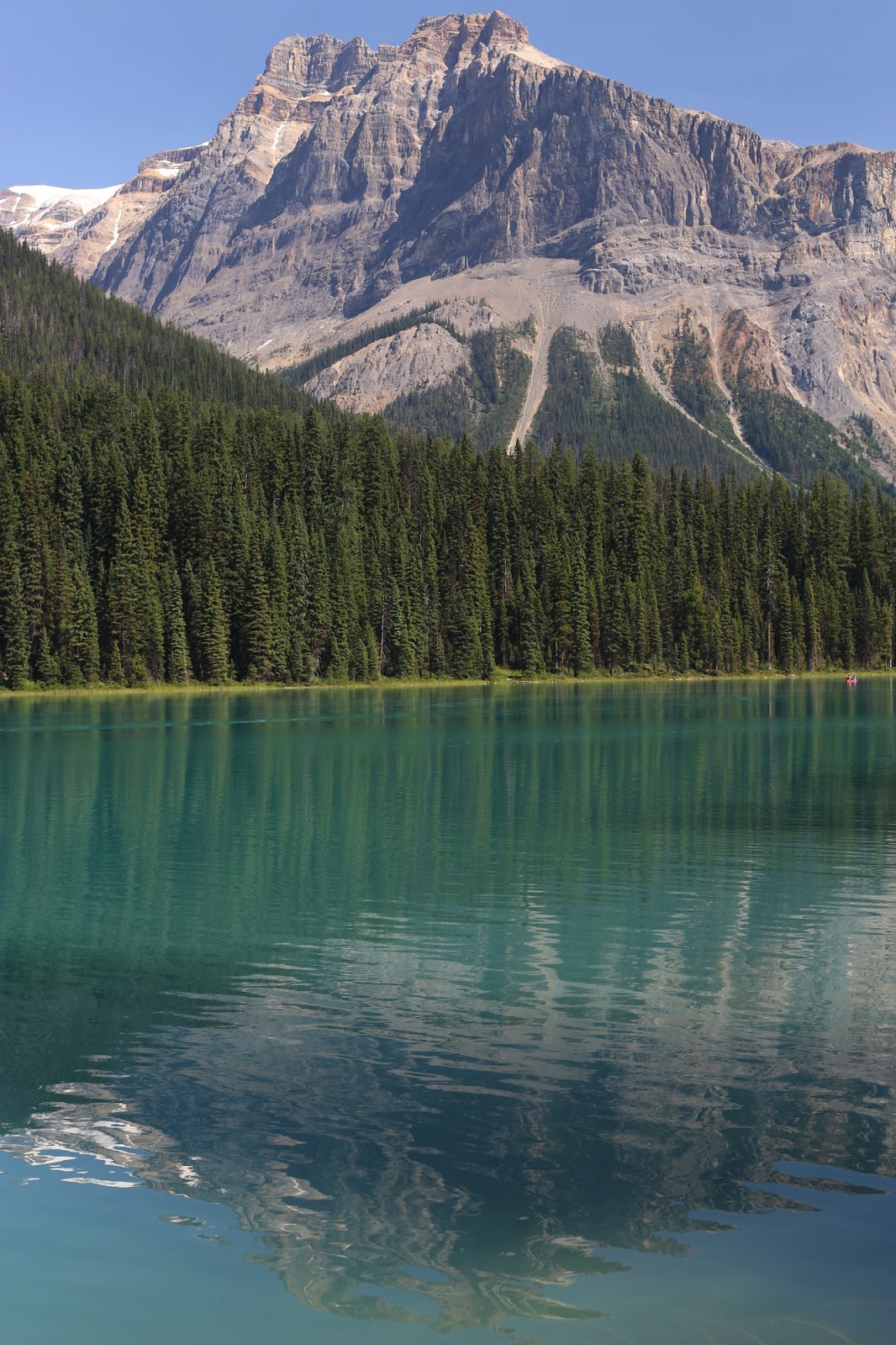 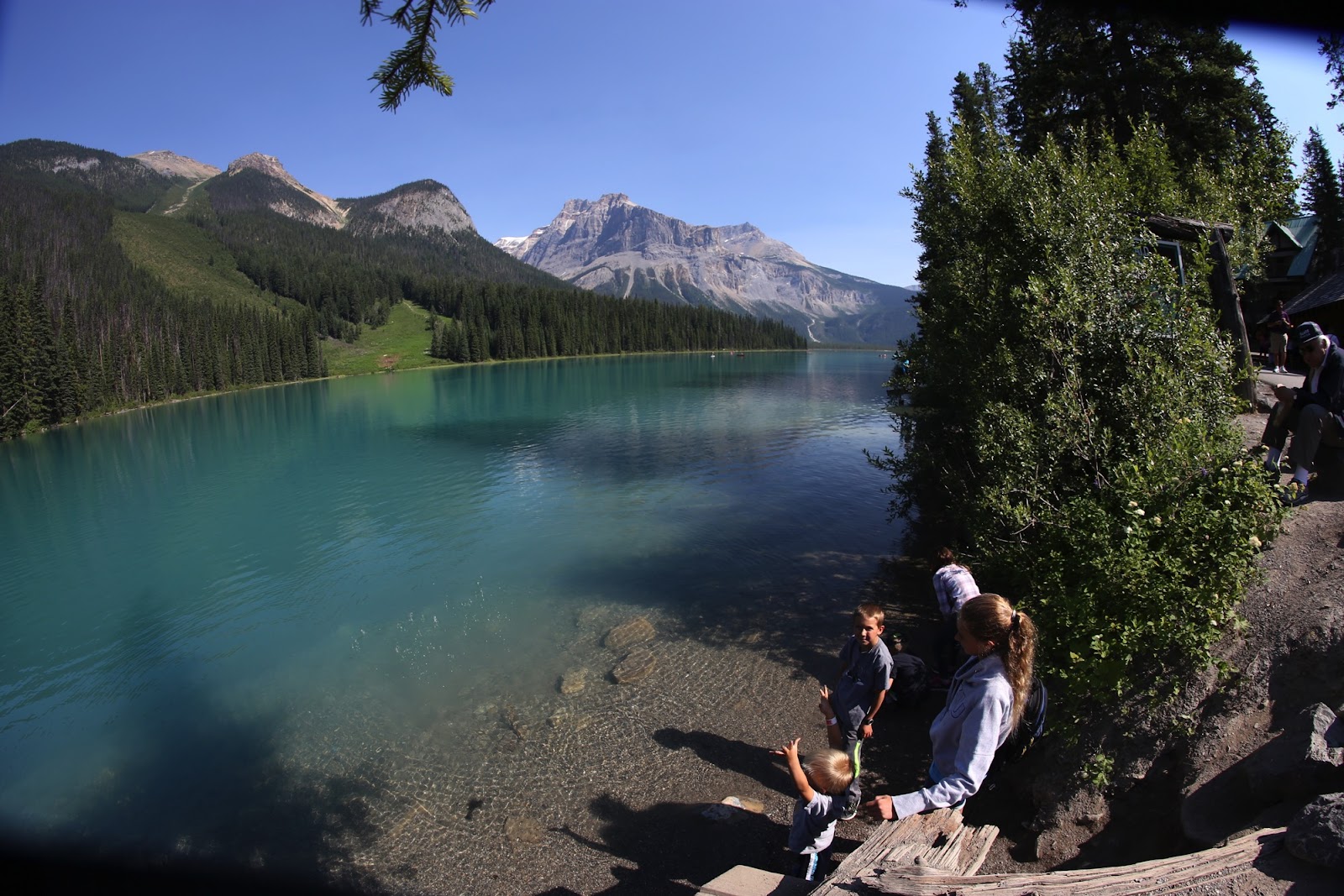 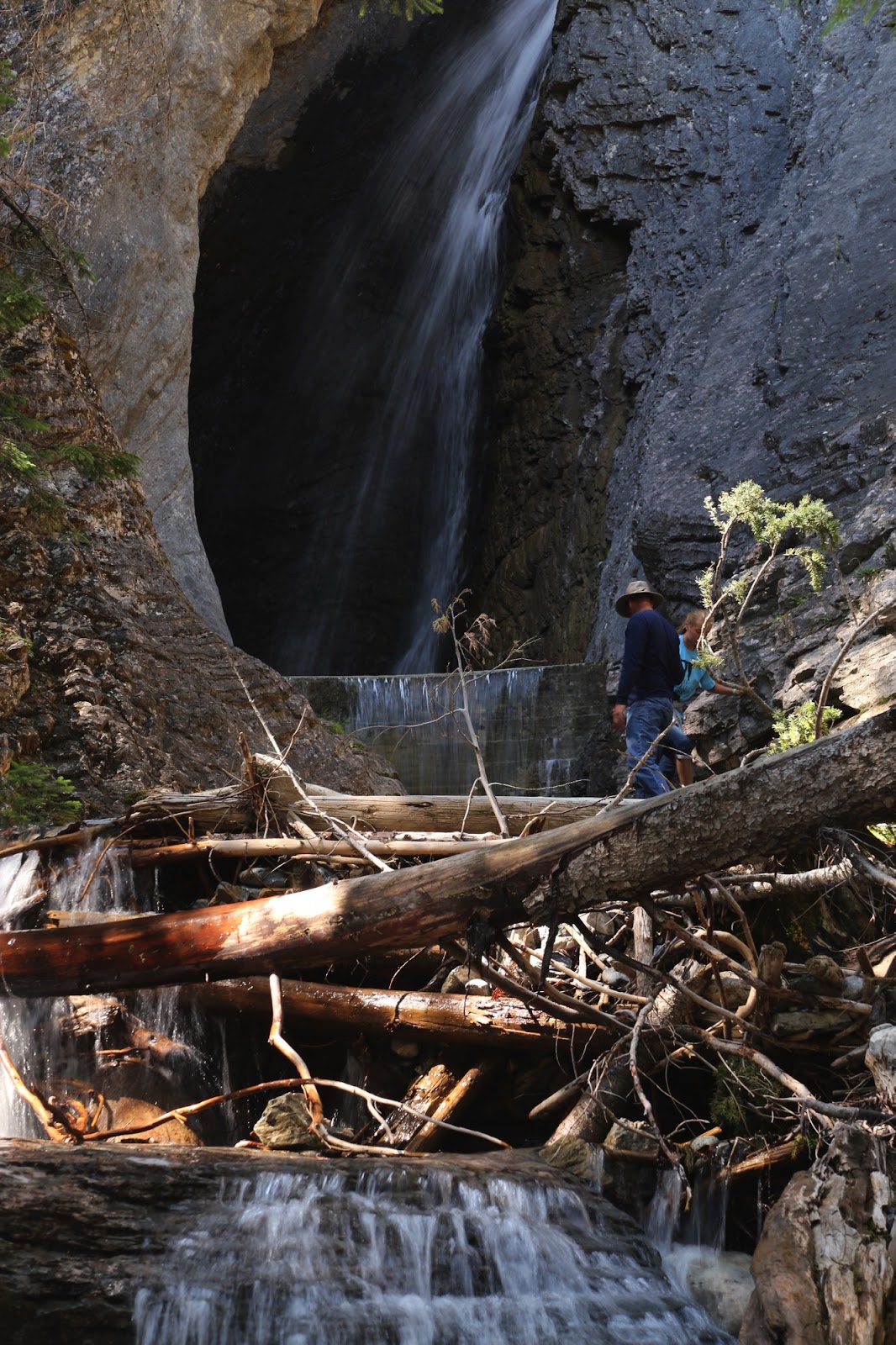 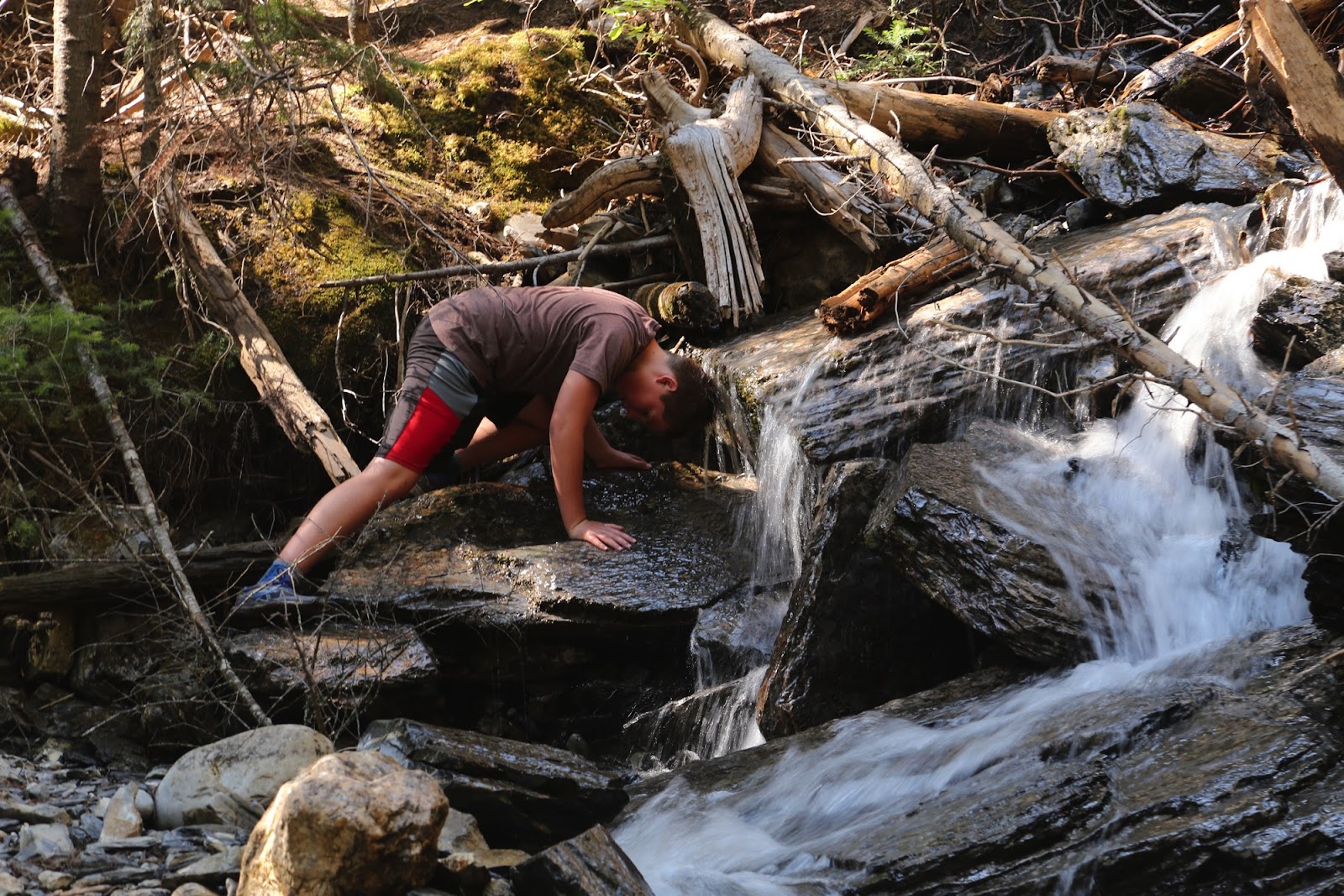 On the way down from Emerald Lake is the Natural Bridge, a gorgeous waterfall and interesting rock formation in the middle of the rushing river. Just spectacular! 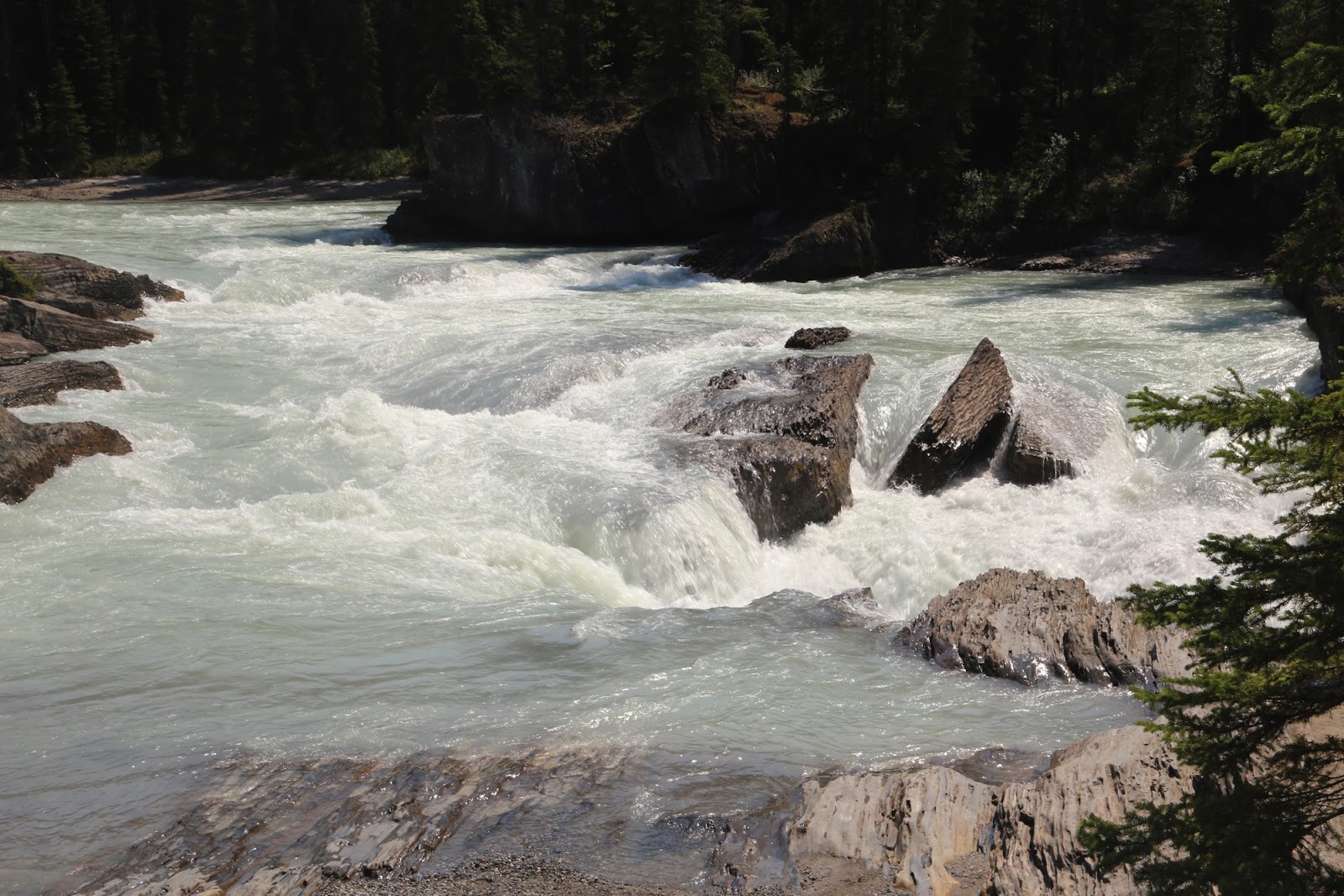 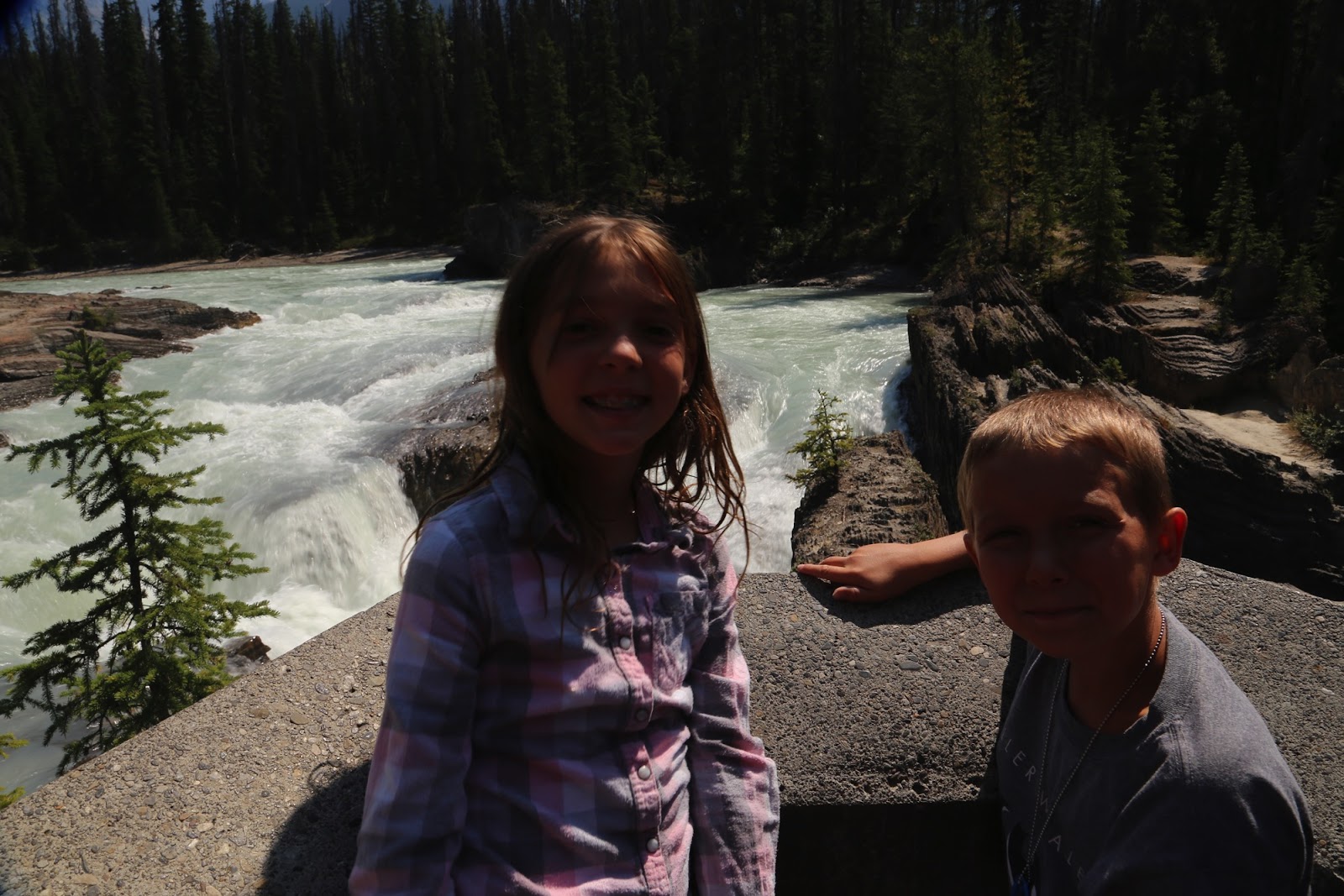 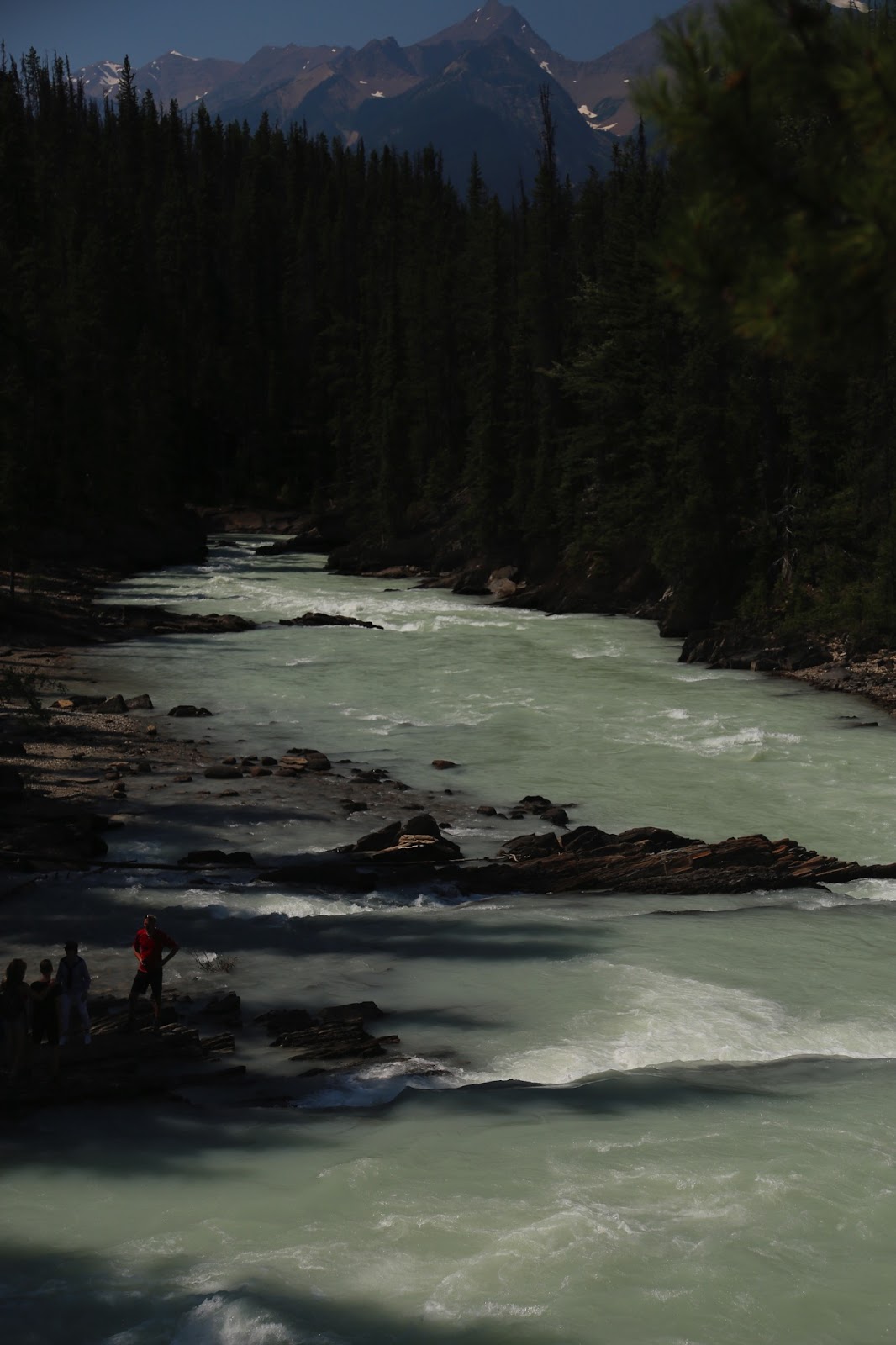 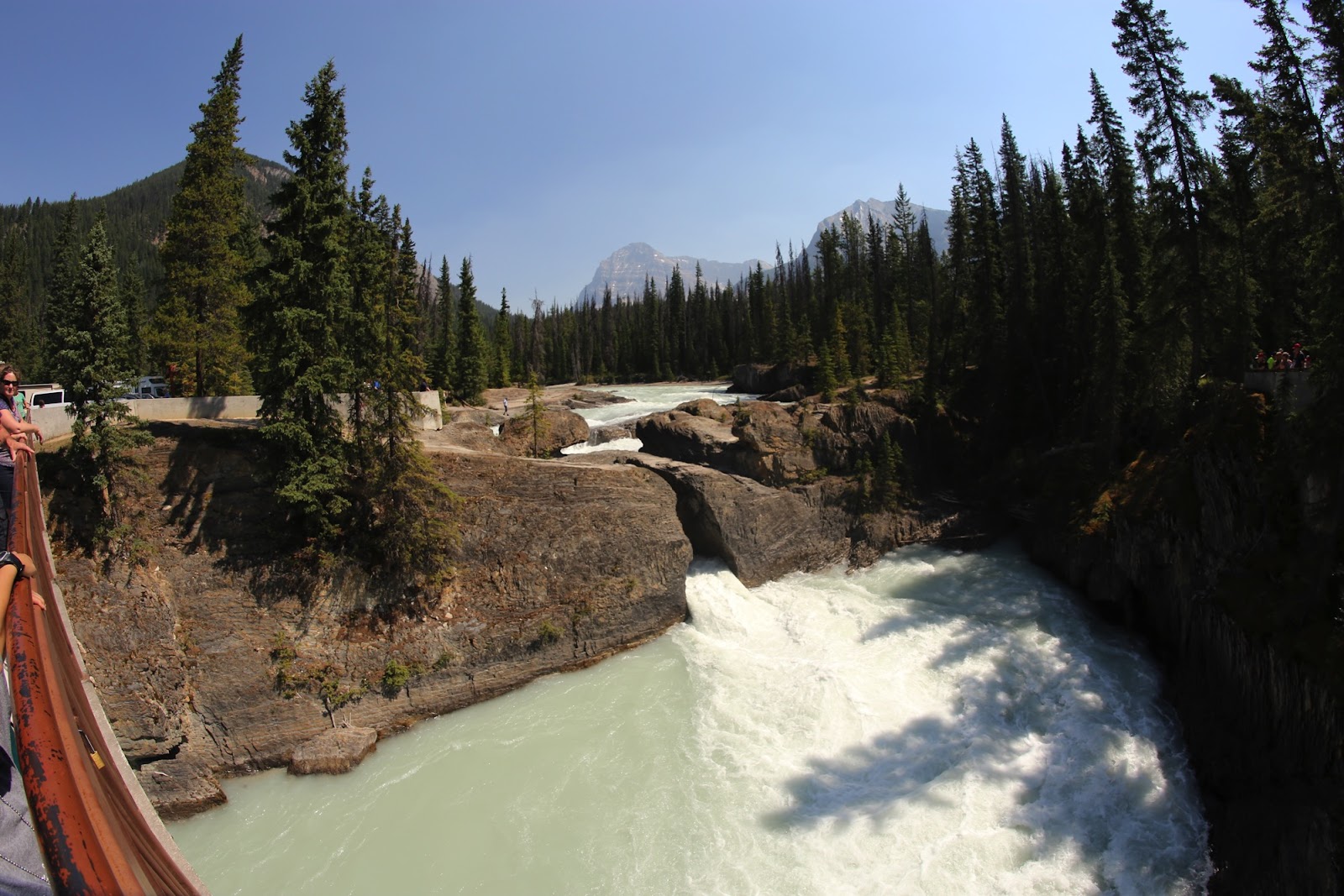 We then headed back to the Lake Louise area to stop for a Linner at the Station Restaurant, which was practically empty. The kids enjoyed playing their piano while we waited for food to be served.
After Linner we split up from the Despains, who needed a few hours to relax. Since we were right there, we went up to Lake Louise. I have been interested in viewing the Fairmont lodges in the area, and at Lake Louise it's just okay. It does have the perfect view of the Lake. On our way back to the Campground we stopped at the visitor center and the kids turned in their Canadian parks explorer packet and pick up their park dog tag. The Canadian park system has a program similar to the US National Parks to keep kids interested in learning about the park and it's environment. The kids are enjoying collecting their dog tag at each park, and the Banff NP has several areas to get them from. So many things to do in the area, we didn't get to do them all. 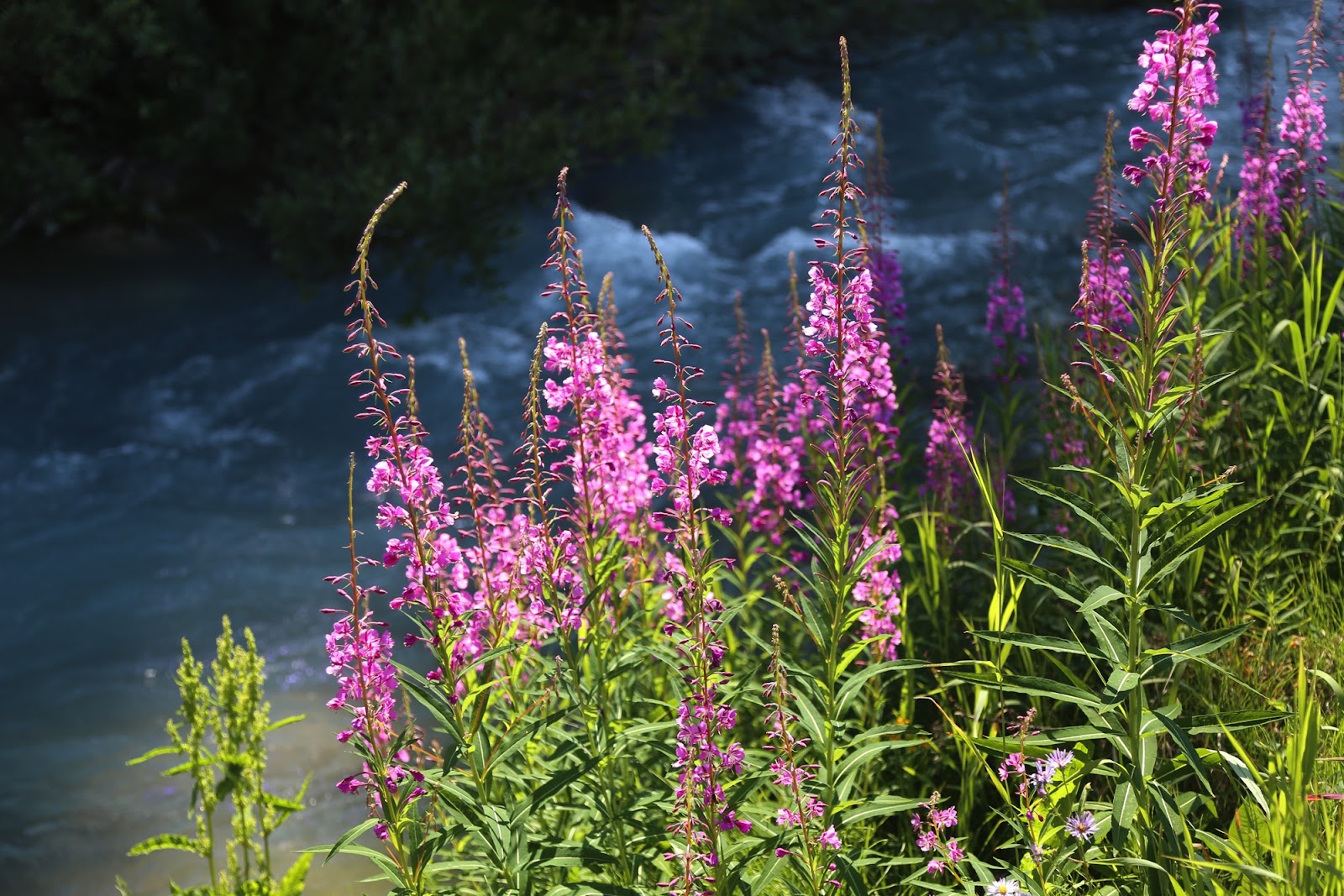 That evening we picked put the Despains and headed all together in the van to Johnston Canyon. It was a quiet drive down the old Banff highway, a small 2 lane road. Since it was after 7pm the parking lot was mostly empty, but there was still plenty of day left to explore and hike the 1.5 miles each way. This is a must see canyon. The well built trail follows the river upstream thru a water carved canyon, to view multiple waterfalls. We love walking through narrow canyons along the water. I am tempted to come back in the winter to view this trail in the snow, as they keep it open all year. I bet it's spectacular! It awesome to see how water carves thru rock over thousands of years. 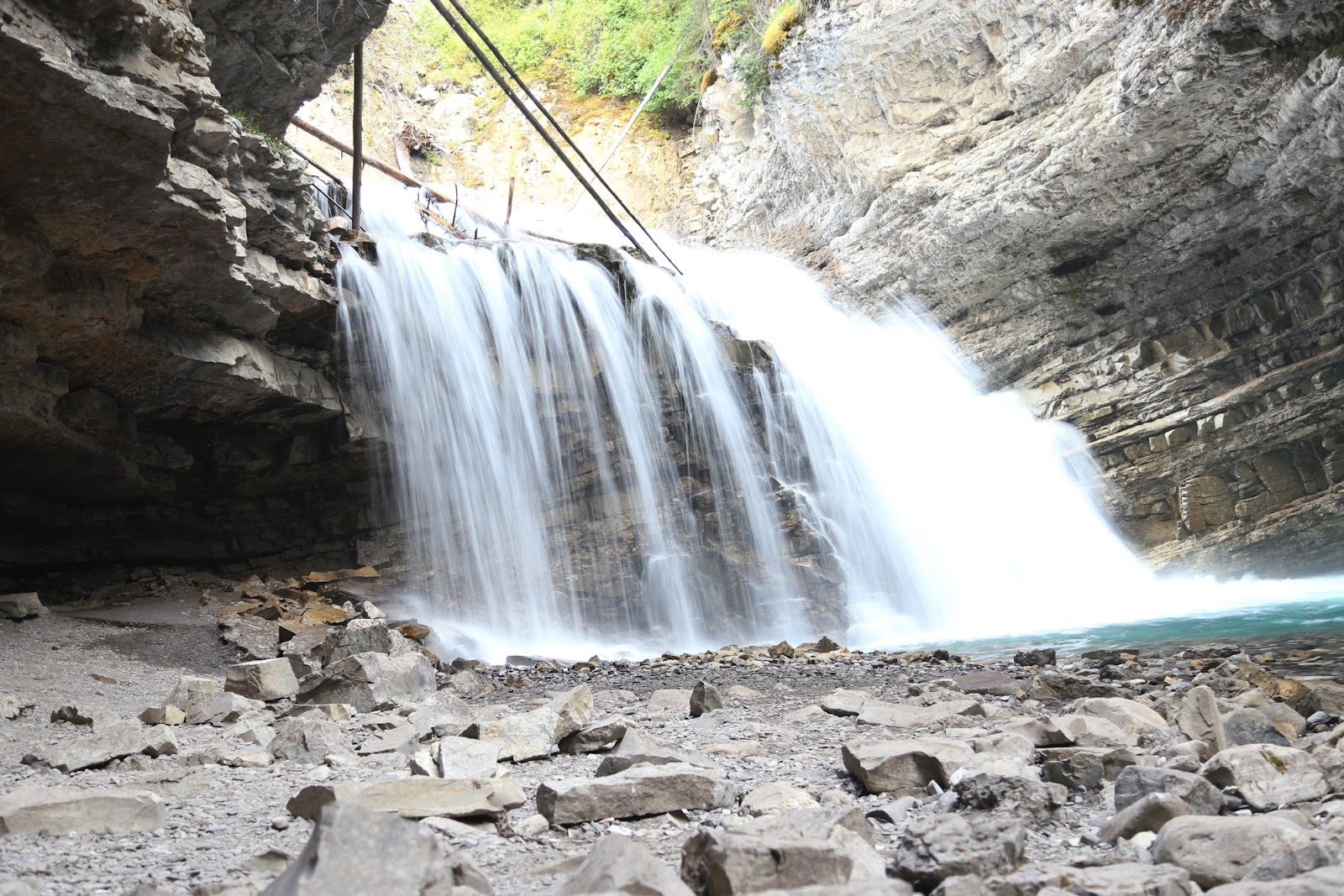 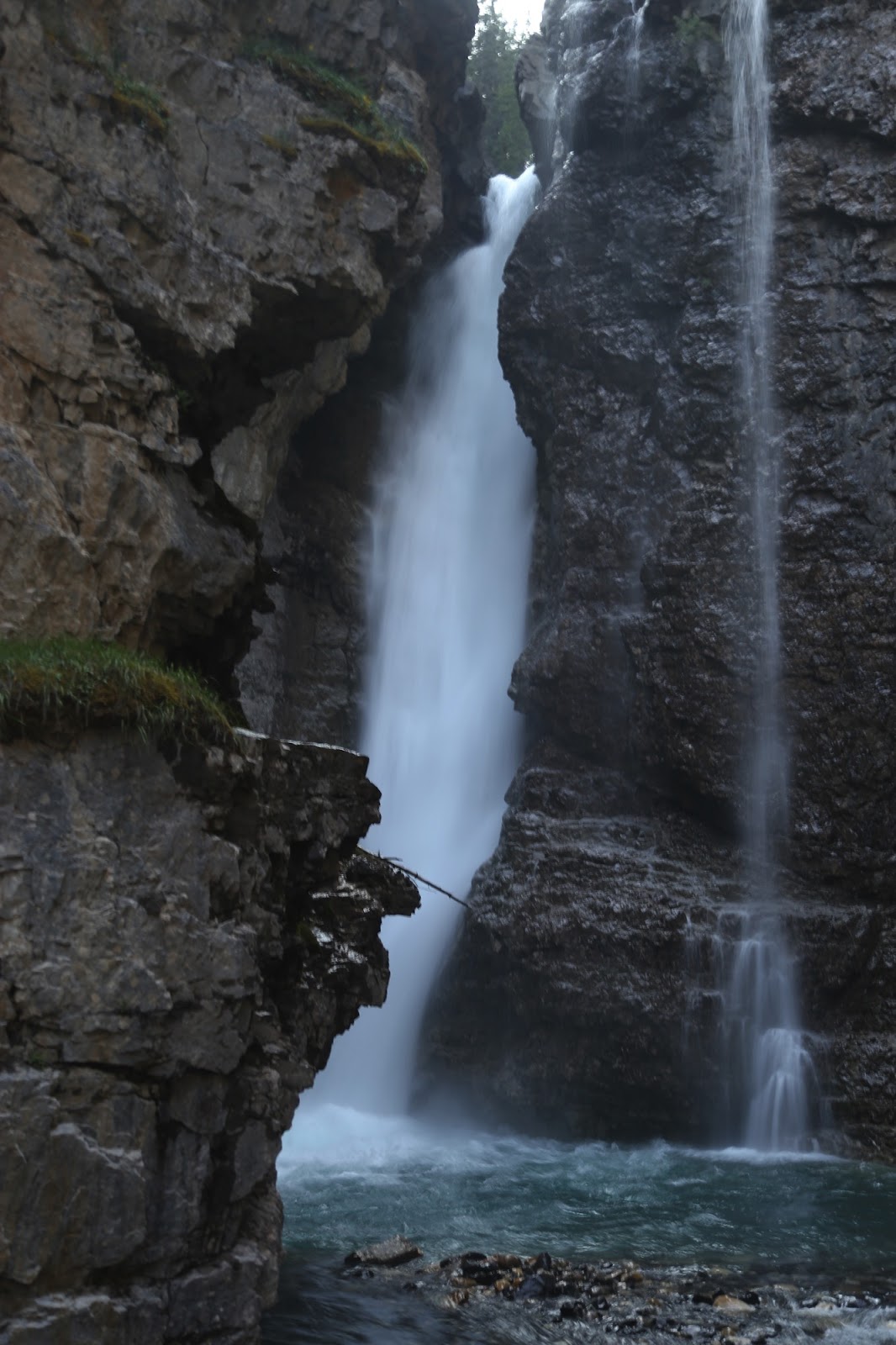 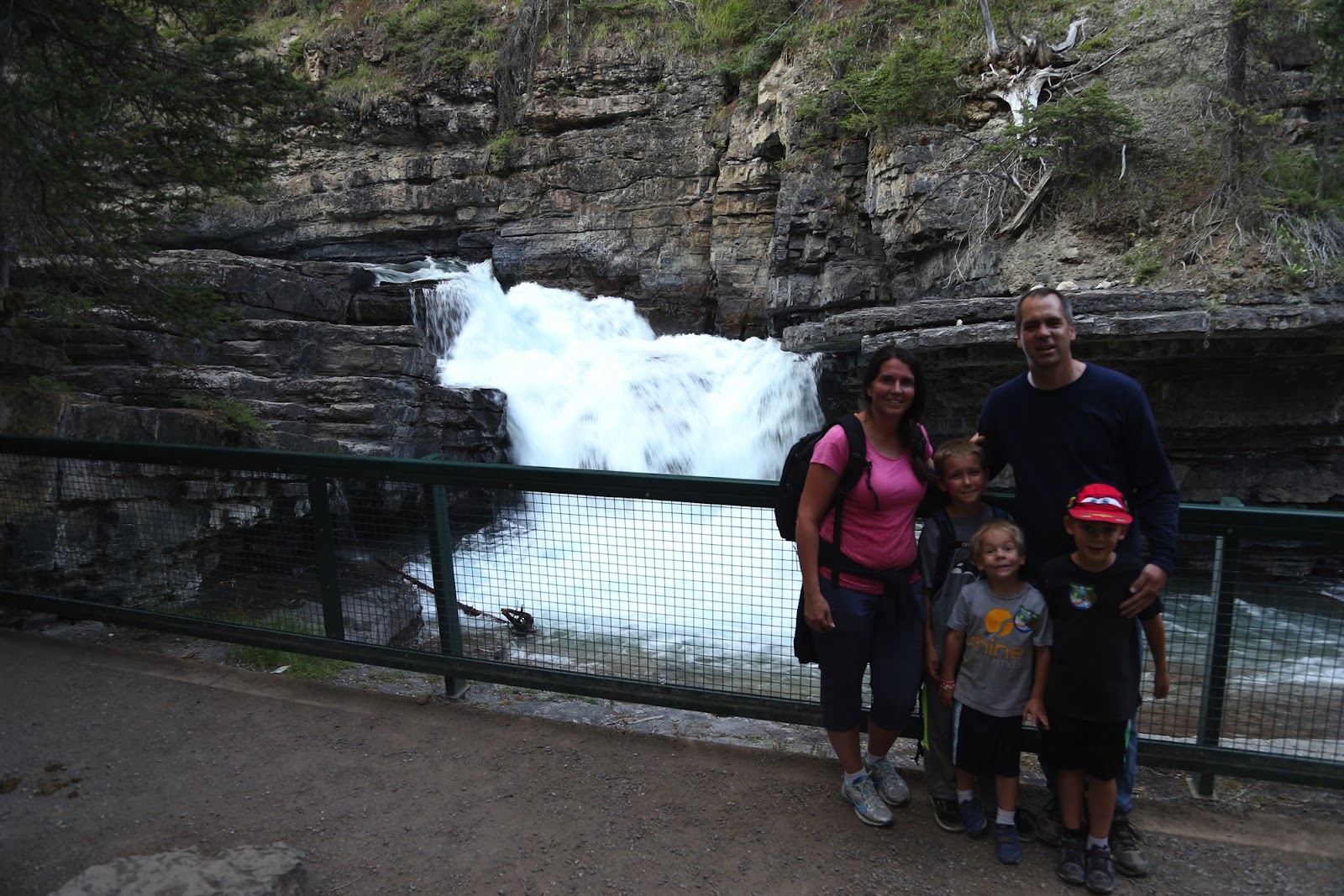 In the morning before church, David woke up early to take Savannah and Calvin on a mountain bike trail that started near the campground. We thought it would only take an hour to bike the 4.9 km trail and back, but it took close to 1.5 hours, which meant we were late to church, which started at 10am and the Banff branch. Parking was difficult in the area, but David kindly dropped us off as he circled the area looking for a place to park our large van. We were late, but Calvin noticed had we been on time he would have had the opportunity to help with passing the sacrament. Since Despains were on time, both Keaton and Sawyer passed together.

Despains made a delicious lunch for all of us, and then we headed out to a nearby ski resort, Mount Norquay to ride the chairlift up a mountain. This was a first for all our kids, to ride 2 by 2 in a chairlift. I could tell riding up the mountain this way made Savannah nervous. David rode with Matthew who he said was also a little scared. I rode with Alex who was as happy as could be with the ride. At the top we watched mountain sheep eat. The view was impeded with smoke blowing over the mountains from nearby fires in SW British Columbia. 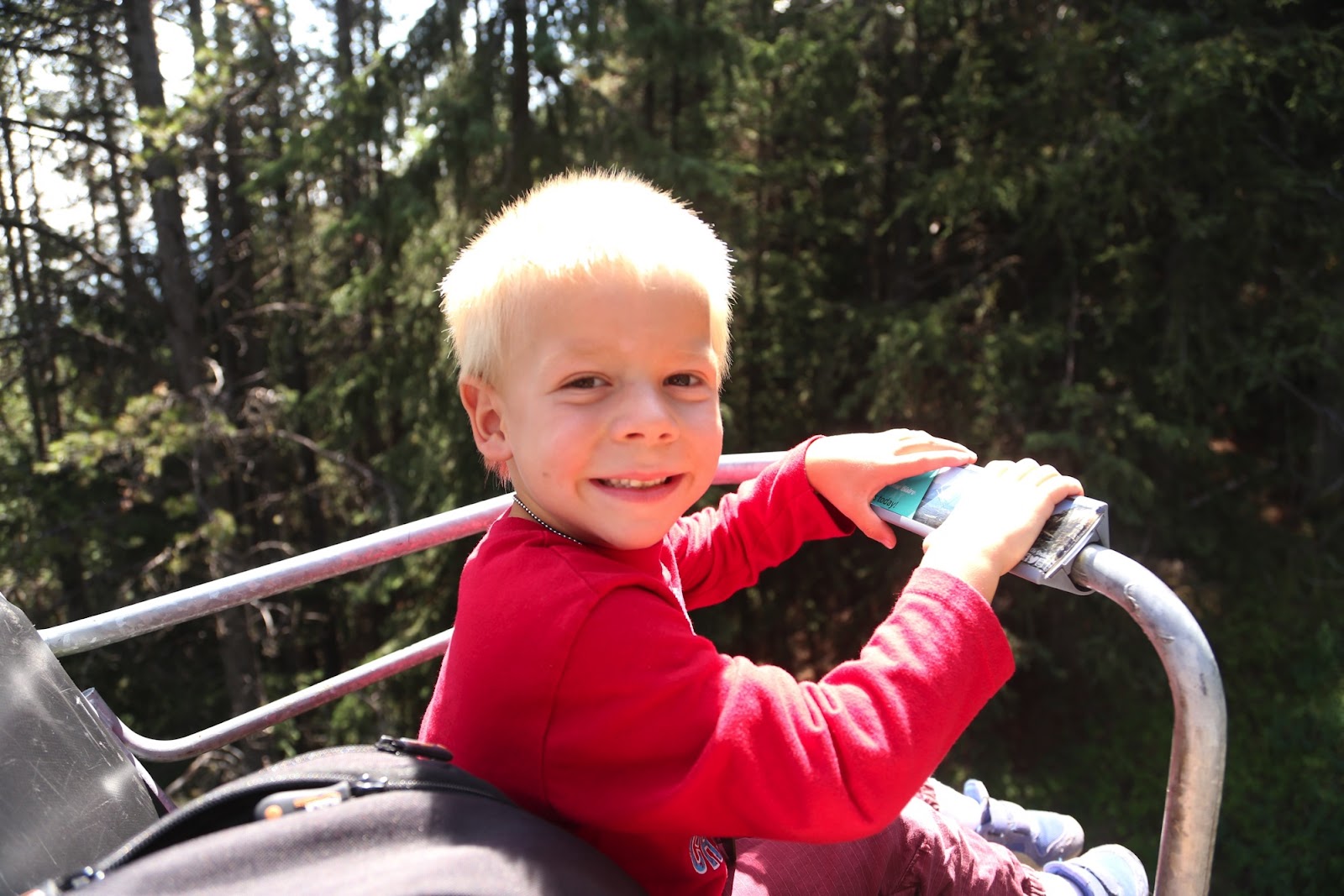 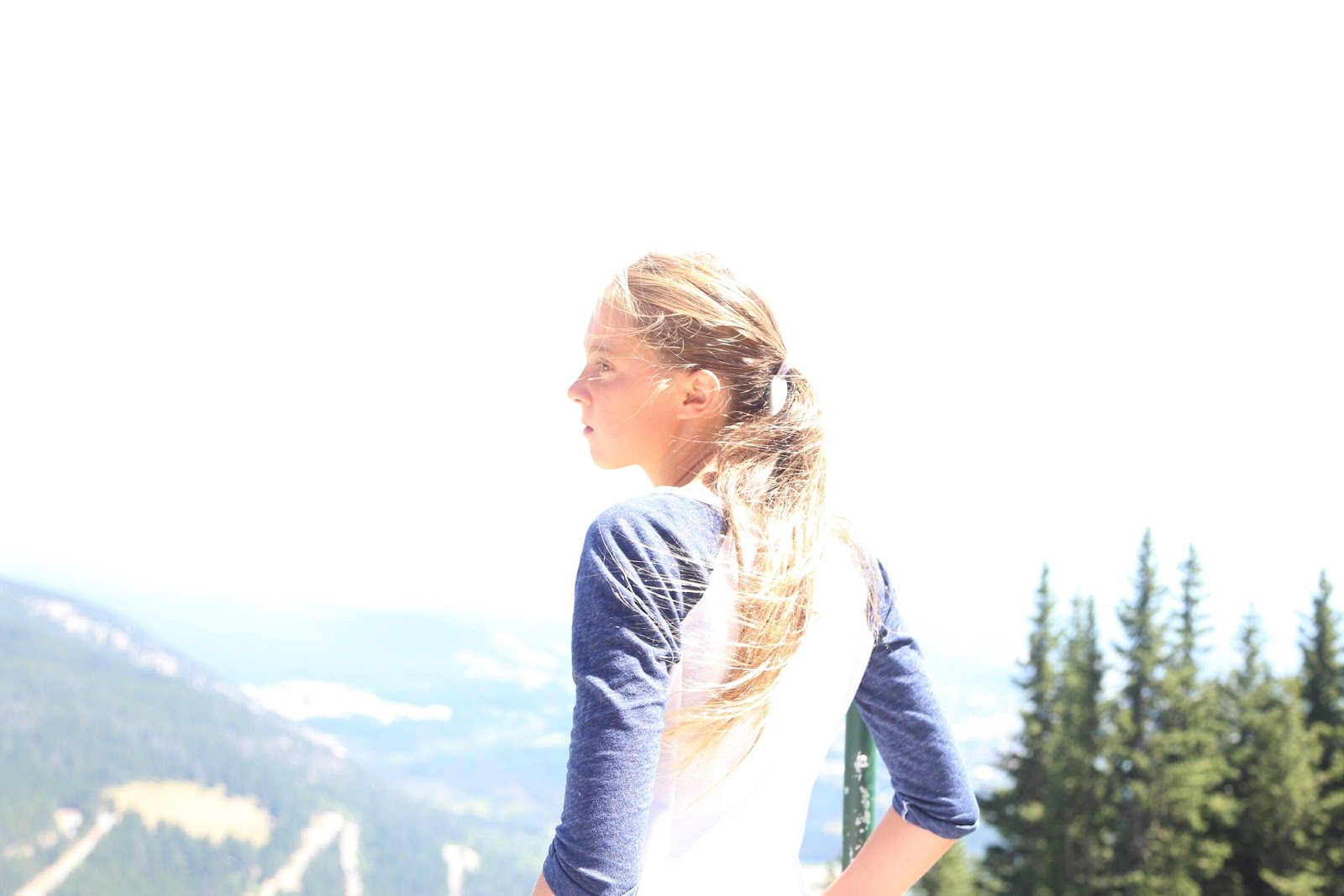 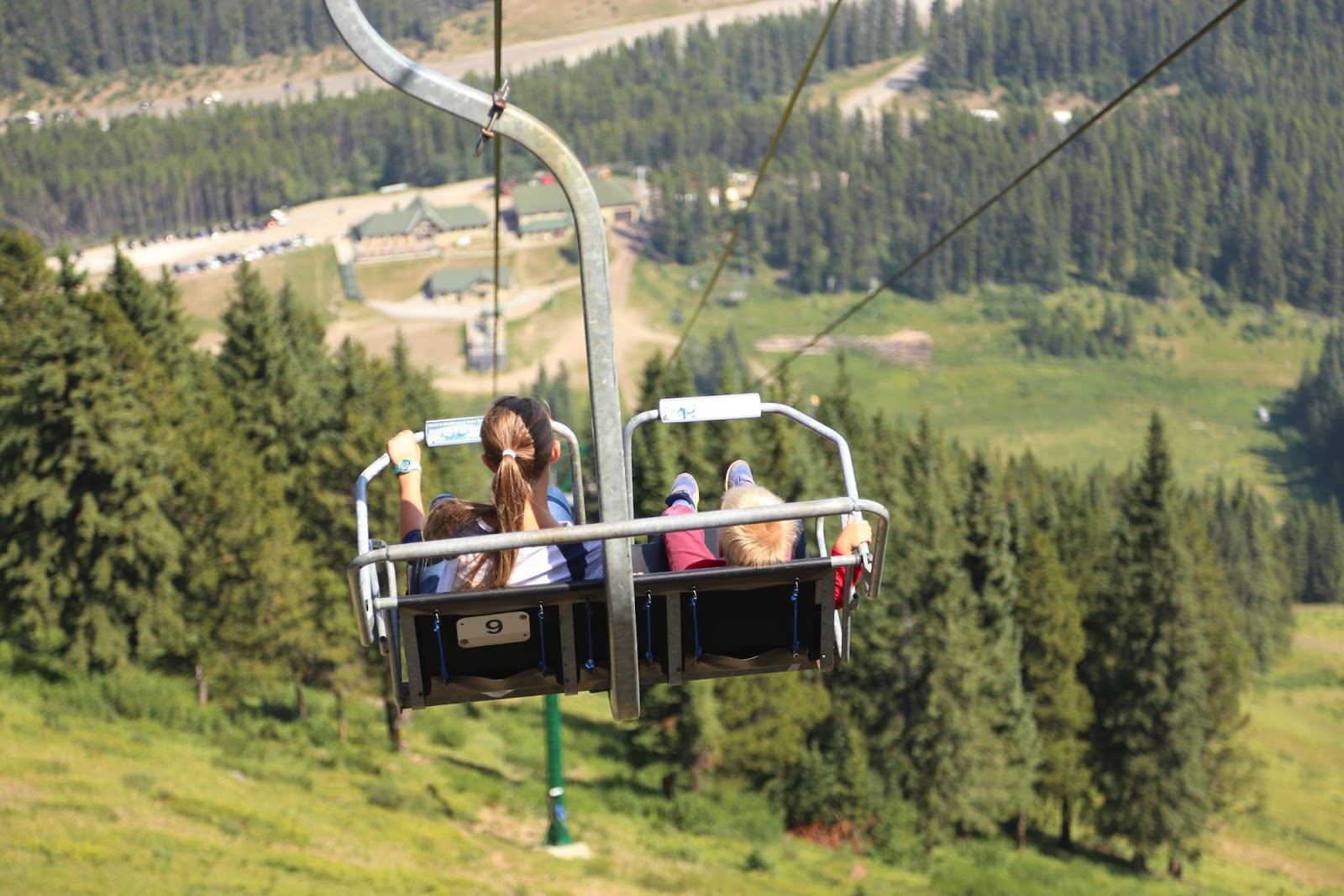 Before dinner we drove by the Fairmont Banff Springs. It's a spectacular castle looking lodge built by the Railroad President back in the late 1800s. It is beautiful and maybe someday I can stay there. We took a rest at the campsite while David took a few of the kids for an easy mountain bike ride on the trail outside the campground. Matthew loved it until he got thirsty at the end.

The Despains cooked us dinner again today and we explored near their little house after. All in all, it was a great day. In the morning we head up to Jasper, along the renowned Icefield Parkway.
Posted by The Blood Family