All 3 families shared a house a few minutes outside of Watertown National Park. The house was large with plenty of room for all of us! We arrived late, ate dinner, and slept good. The next day we headed into the park to explore. There's a nice village with homes and shopping, and a historic lodge on top of a bluff overlooking the large lake! Absolutely beautiful! 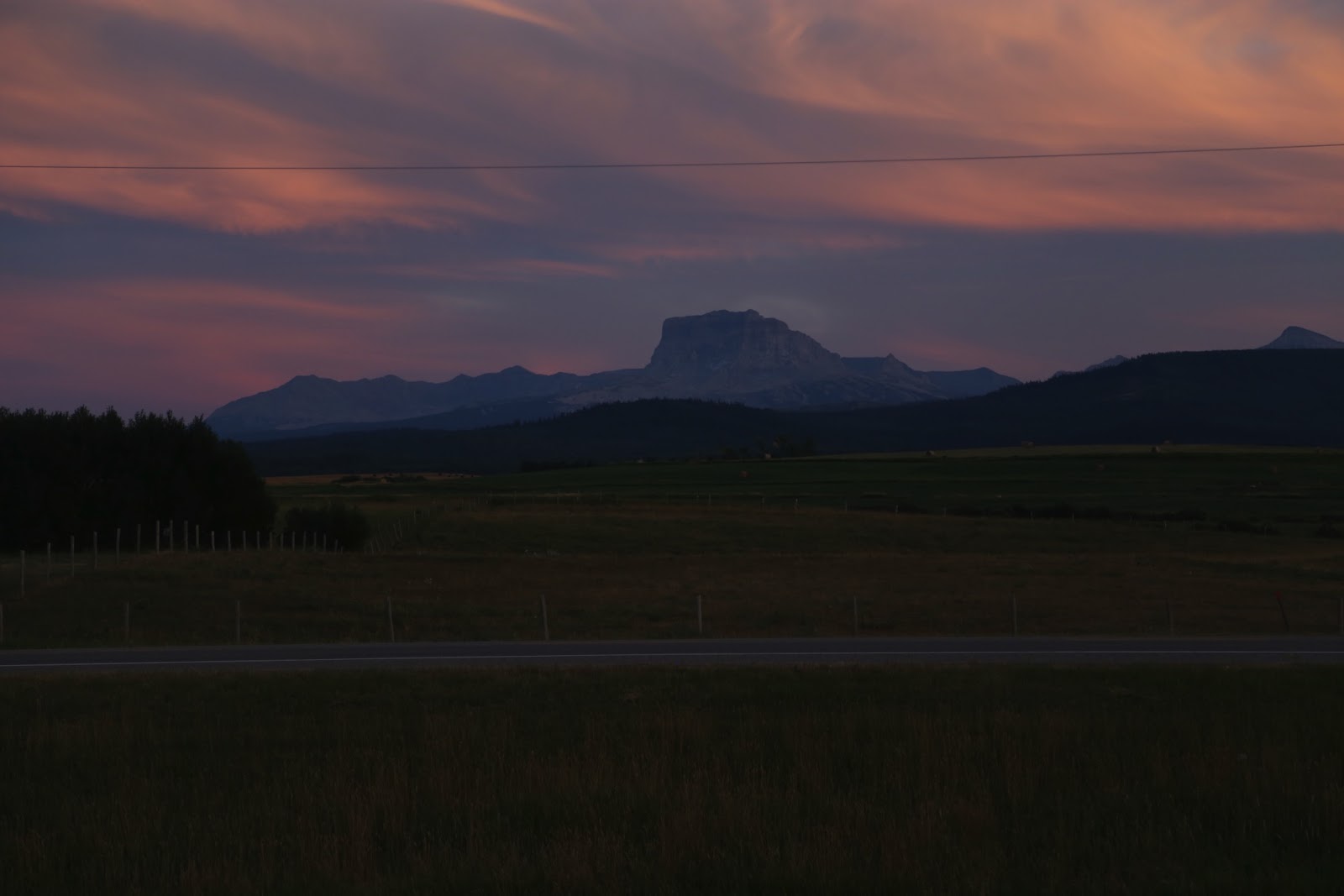 We started on a short shoreline hike, and made it to a peninsula, where the kids ran to the water to throw rocks, when the adults noticed a small black bear off to the side, eating something along the shoreline. We watched for a few minutes, before heading back down the trail, the way we came. 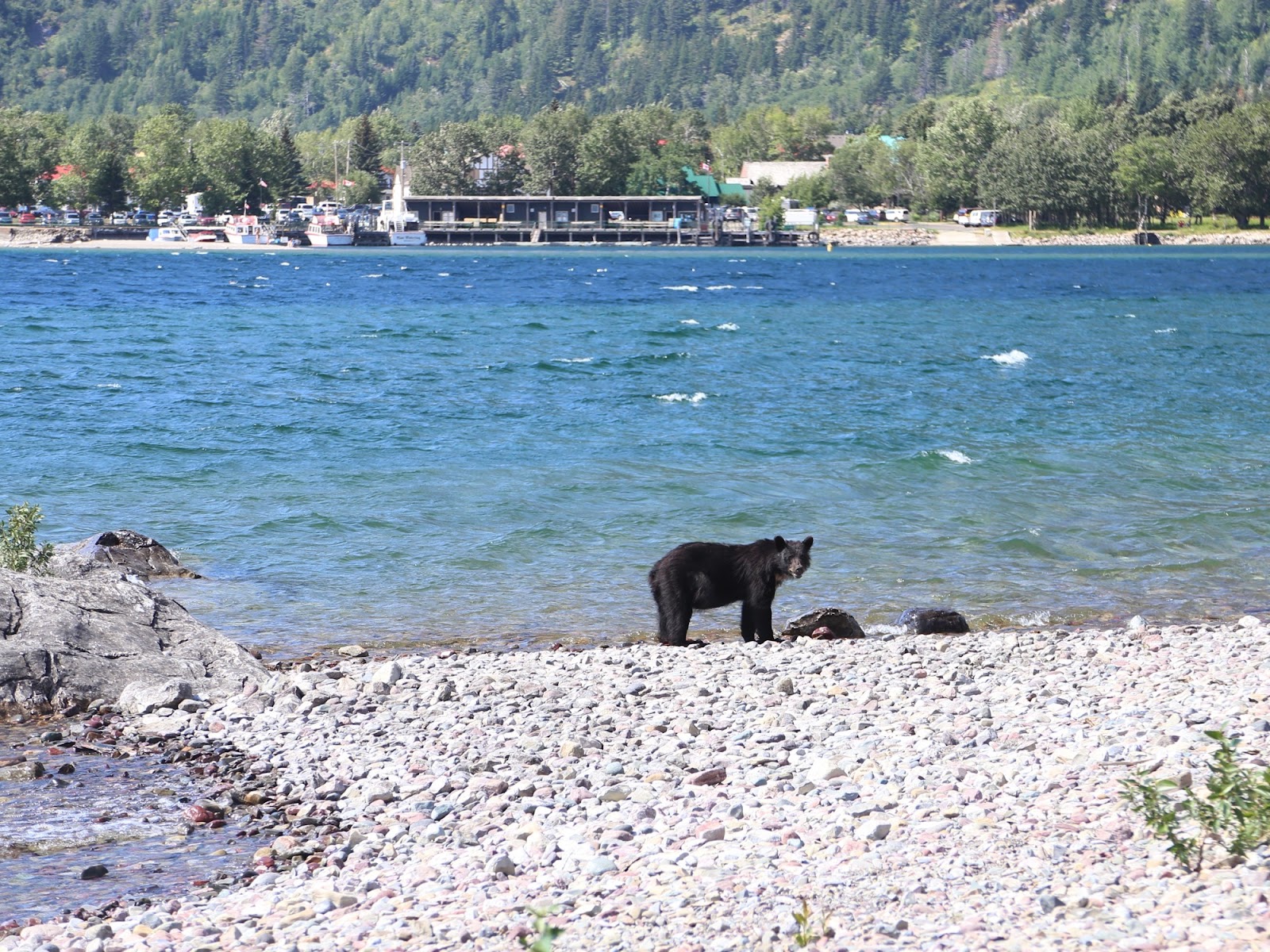 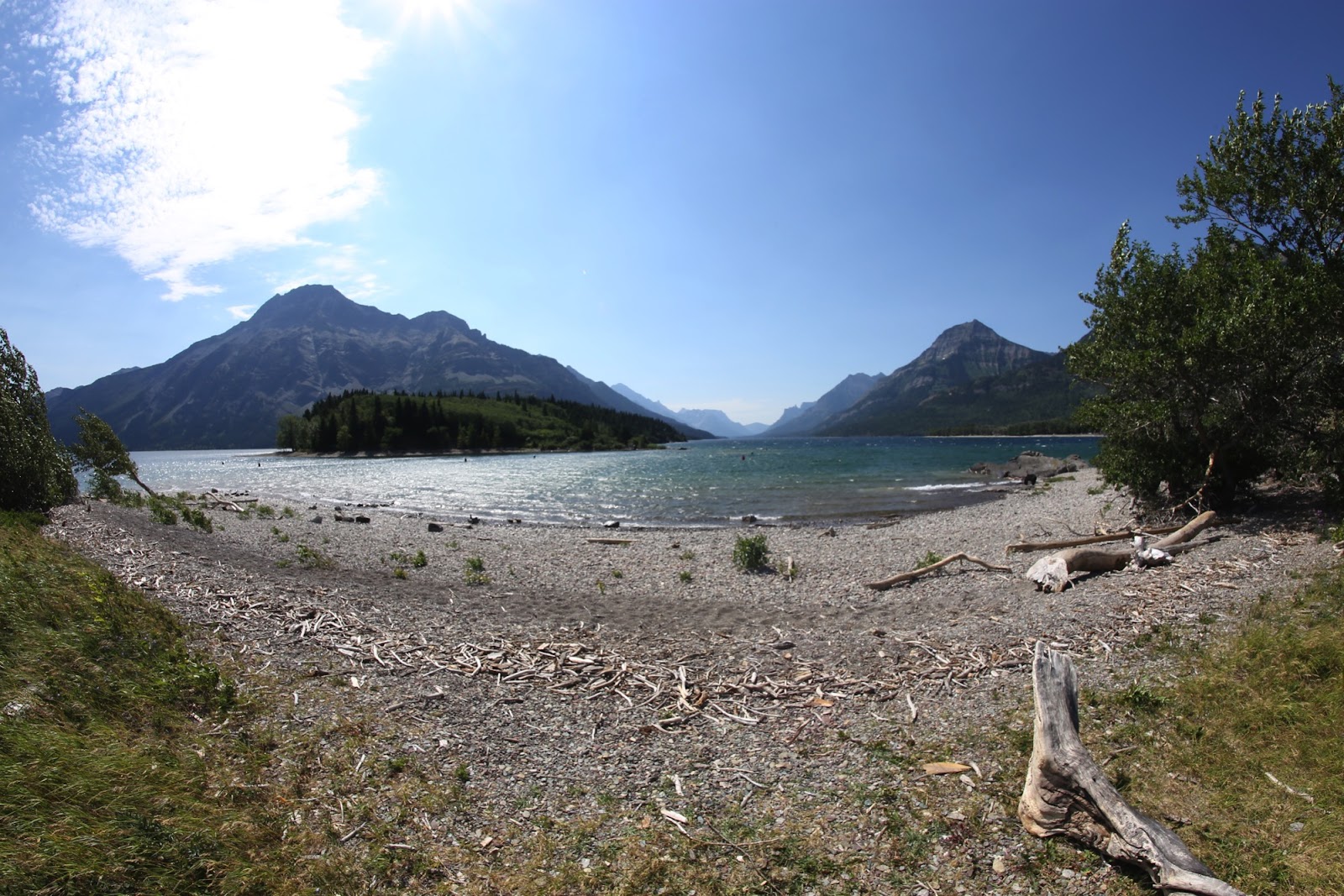 Savannah practiced her driving skills by chauffeuring us around the park. After lunch at a quiet picnic spot near a pretty little lake, we headed out for an afternoon hike up Red Rock Canyon.
It was absolutely crowded, but the scenery was spectacular! We changed into swim gear and water shoes and headed upstream in the canyon. We had to make our way thru the crowds of people, but the further upstream we went, the less crowded in became, until it was pretty much just us. The canyon walls are stunning, but the fun thing is the natural rock slides and pools that have formed over thousands of years of water running through here. The kids had a fabulous time sliding and hiking to the next slide. Even though the water was glacier cold, they had a great time trying each slide and hiking thru the water. We had to rock hop, shimmy across fallen trees, and wade in knee deep water at times. A great hike! 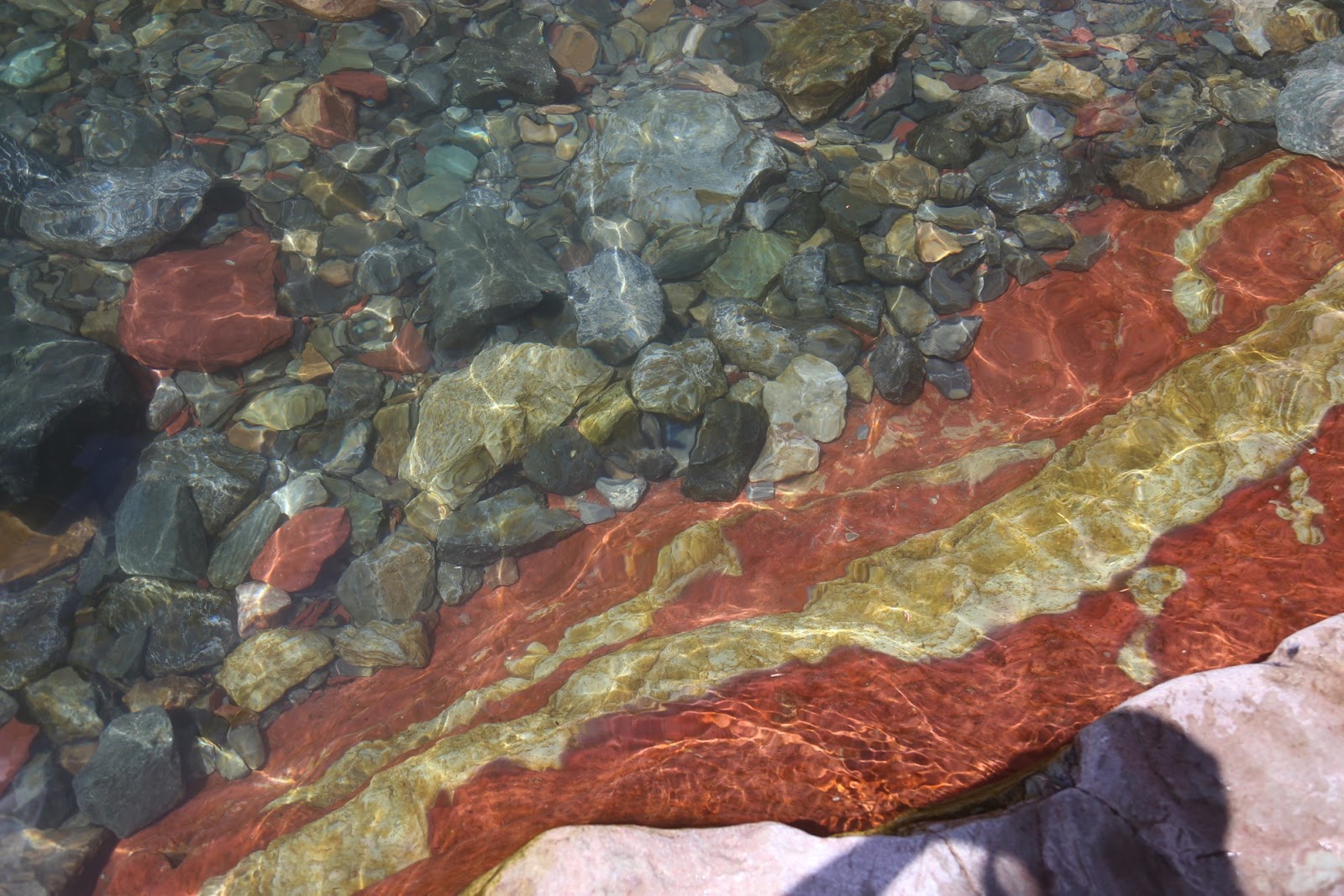 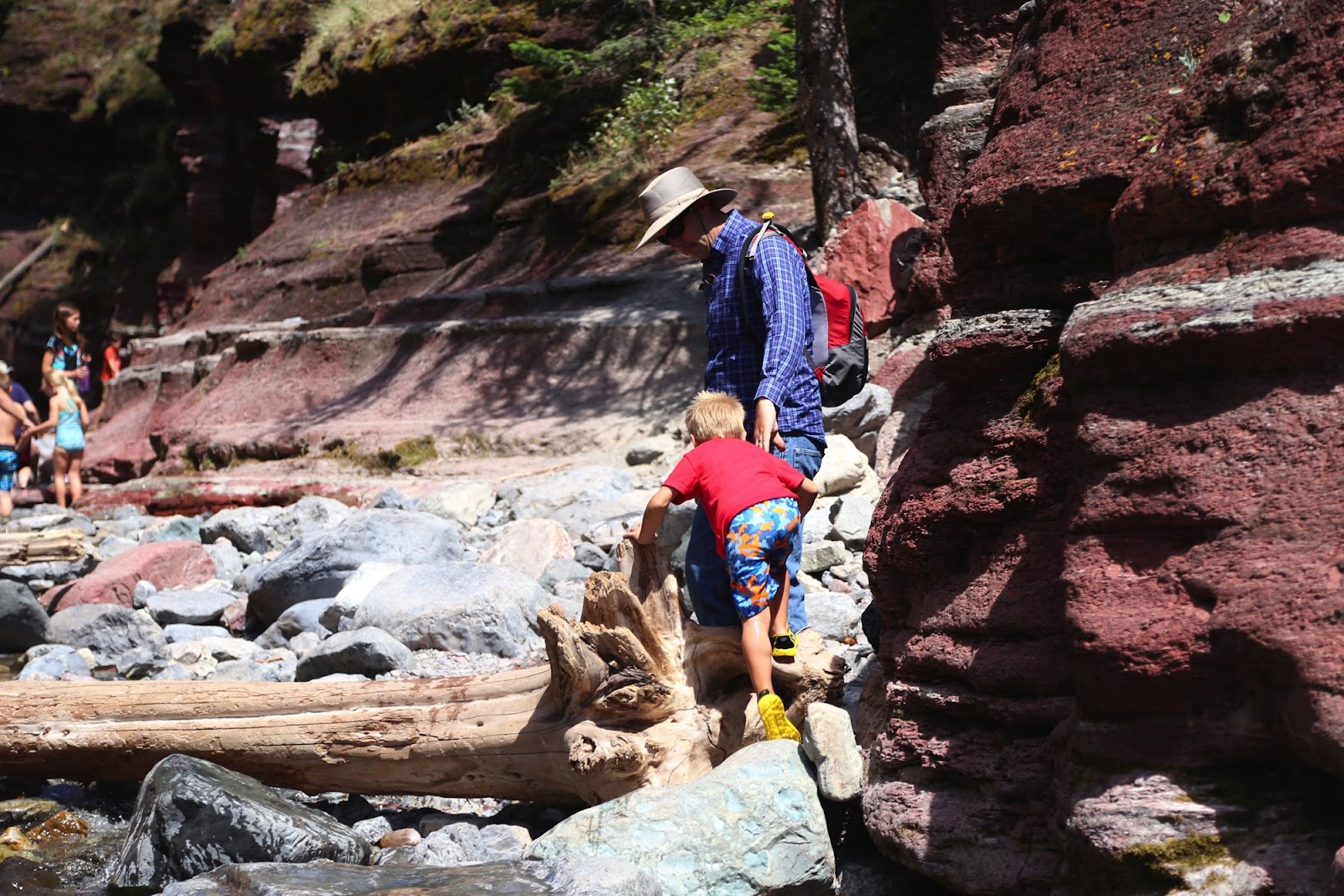 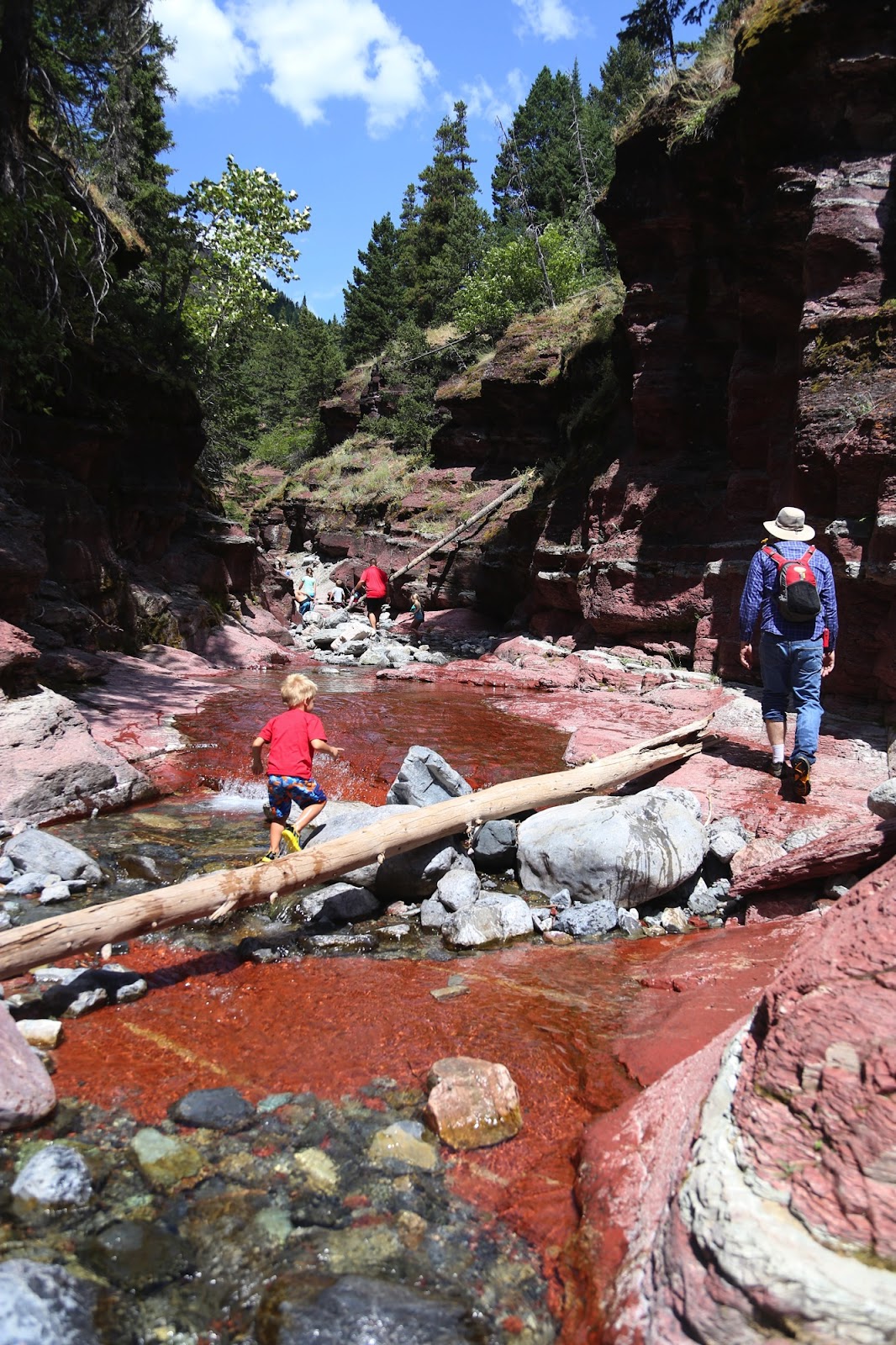 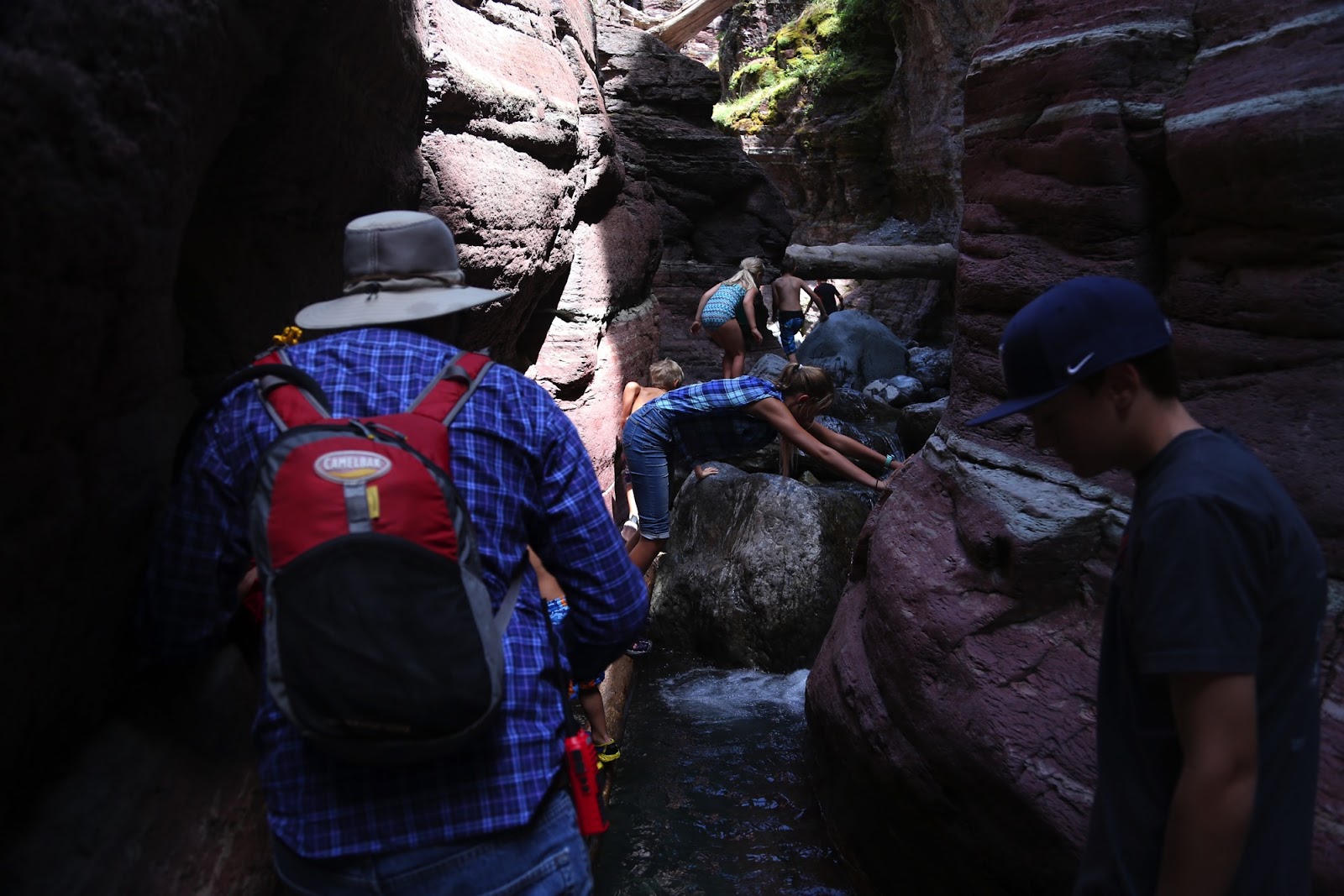 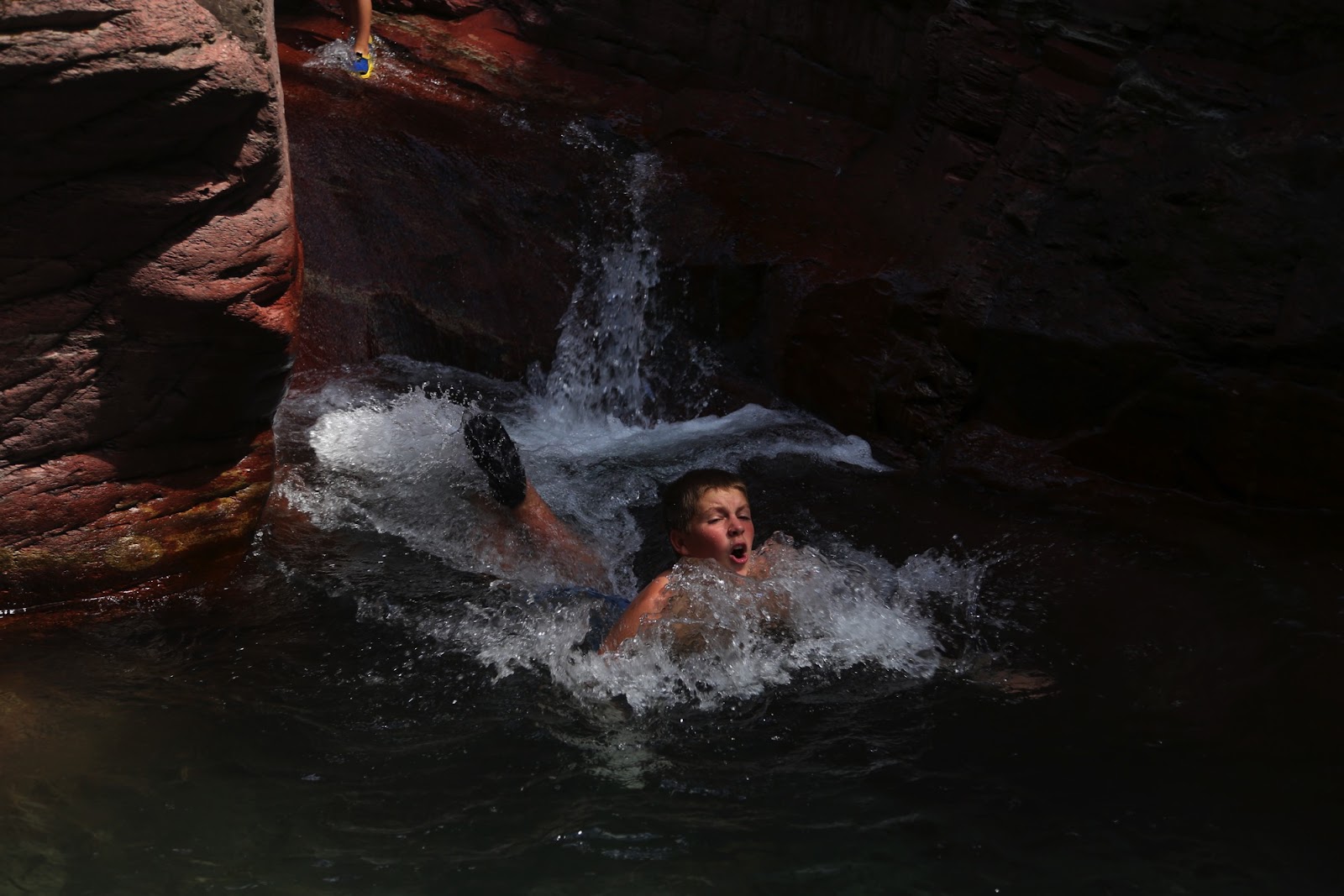 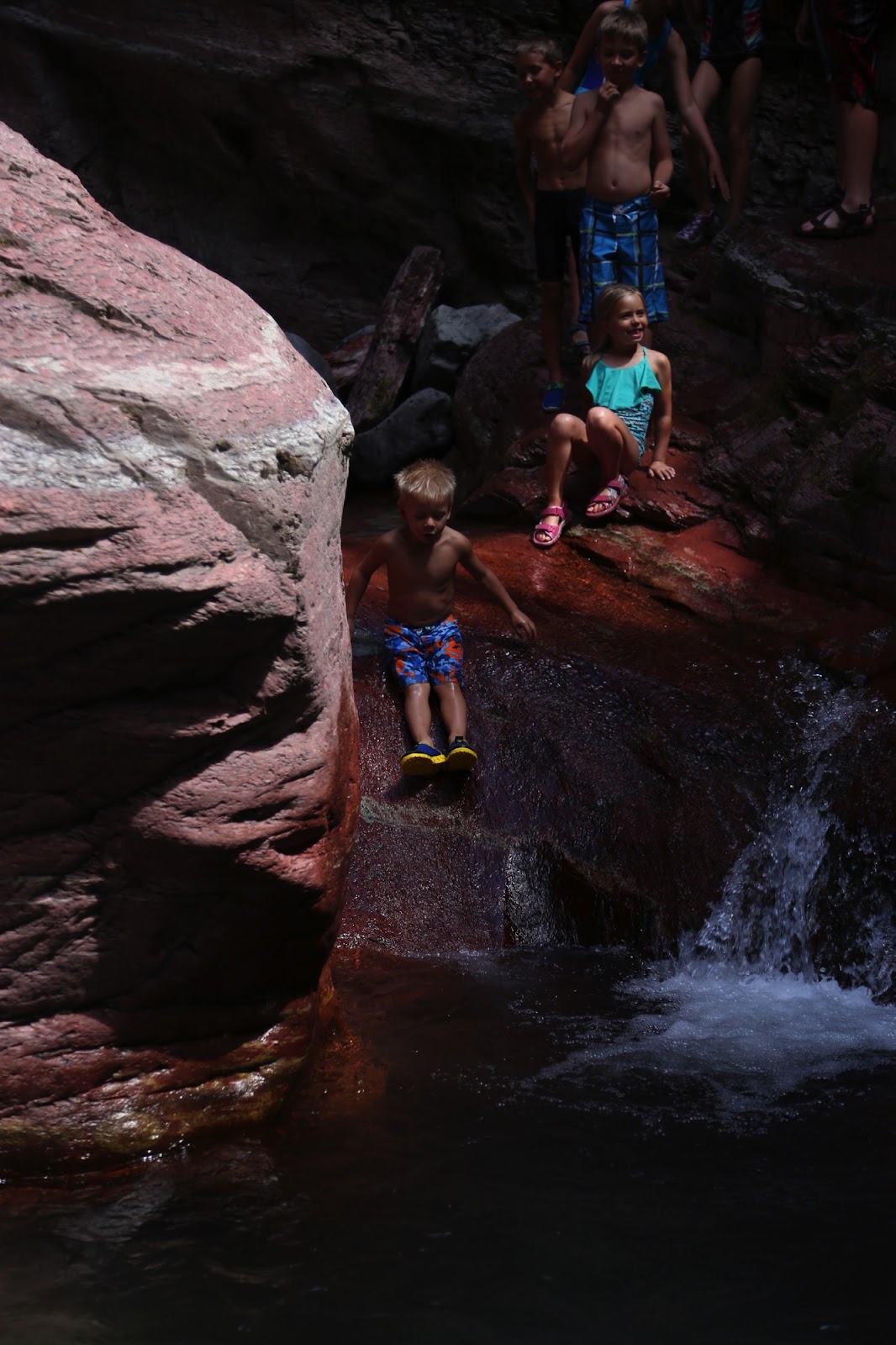 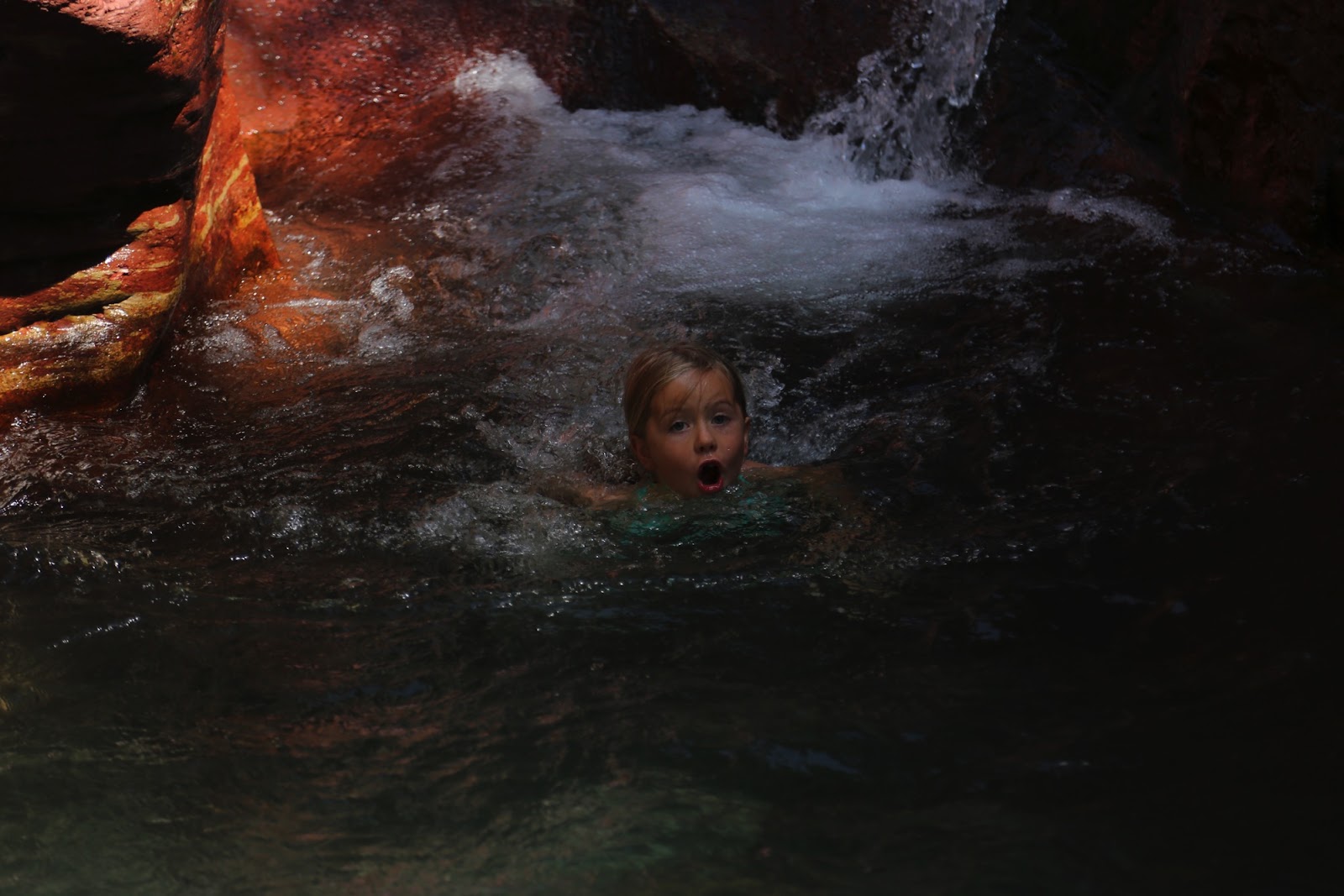 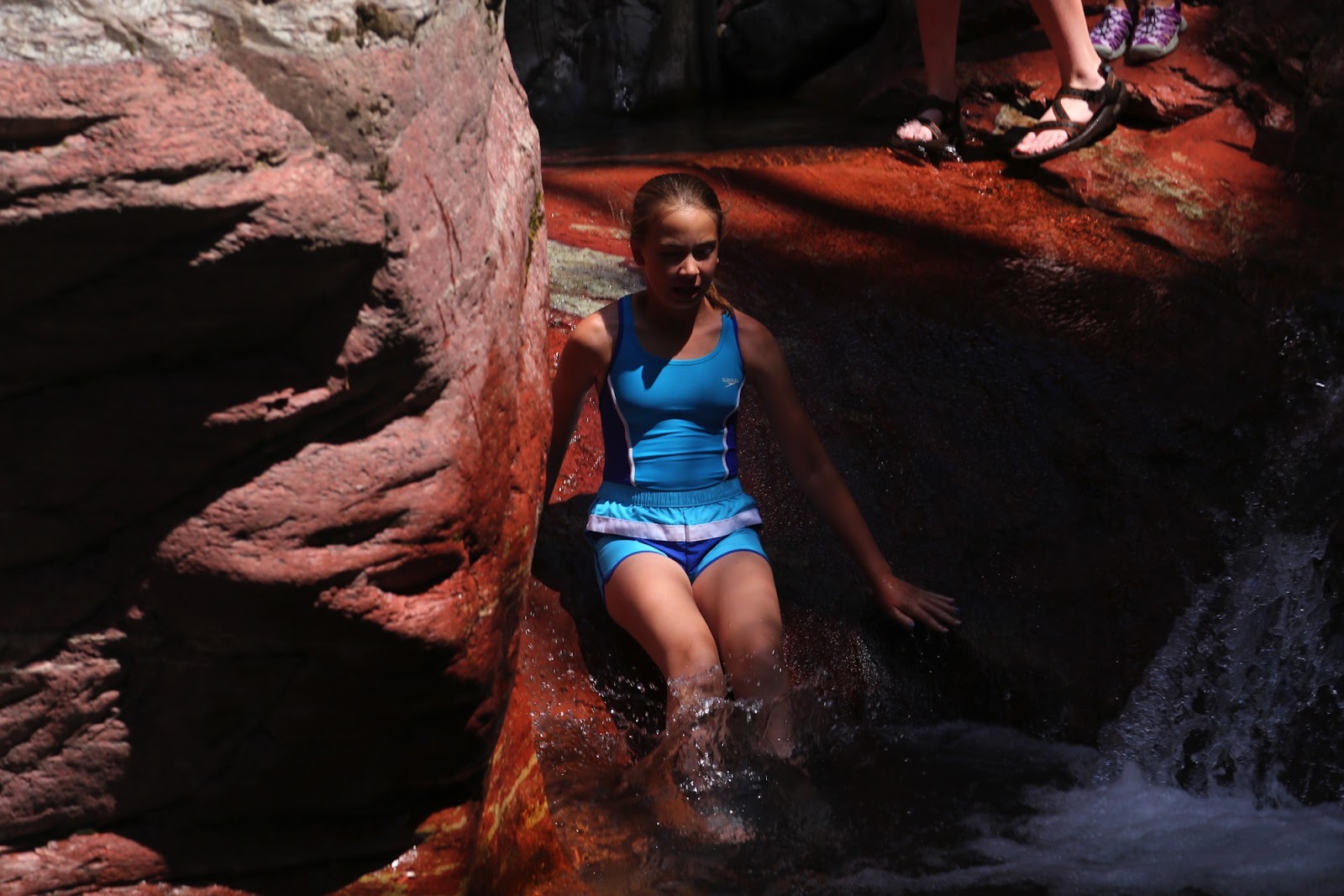 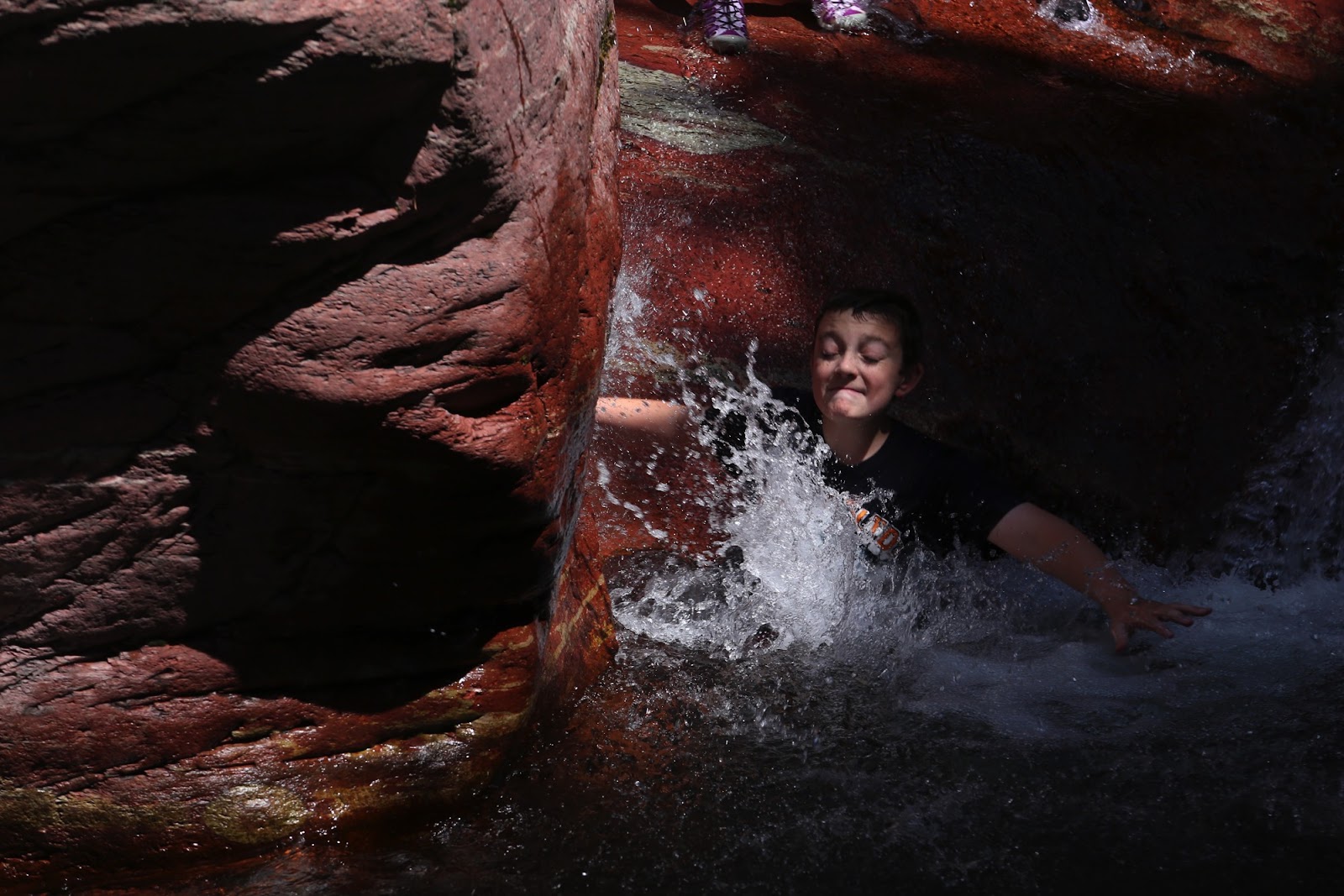 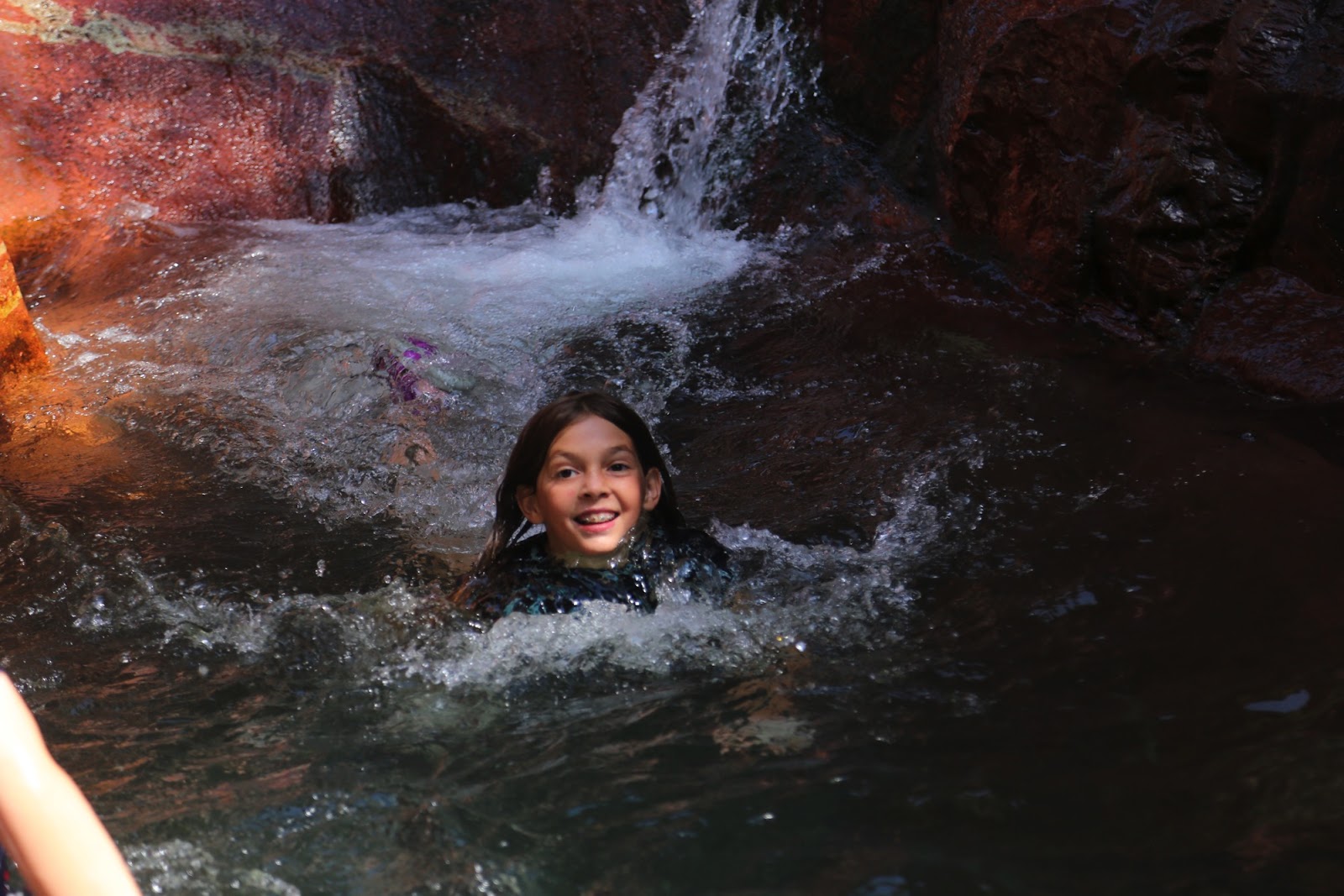 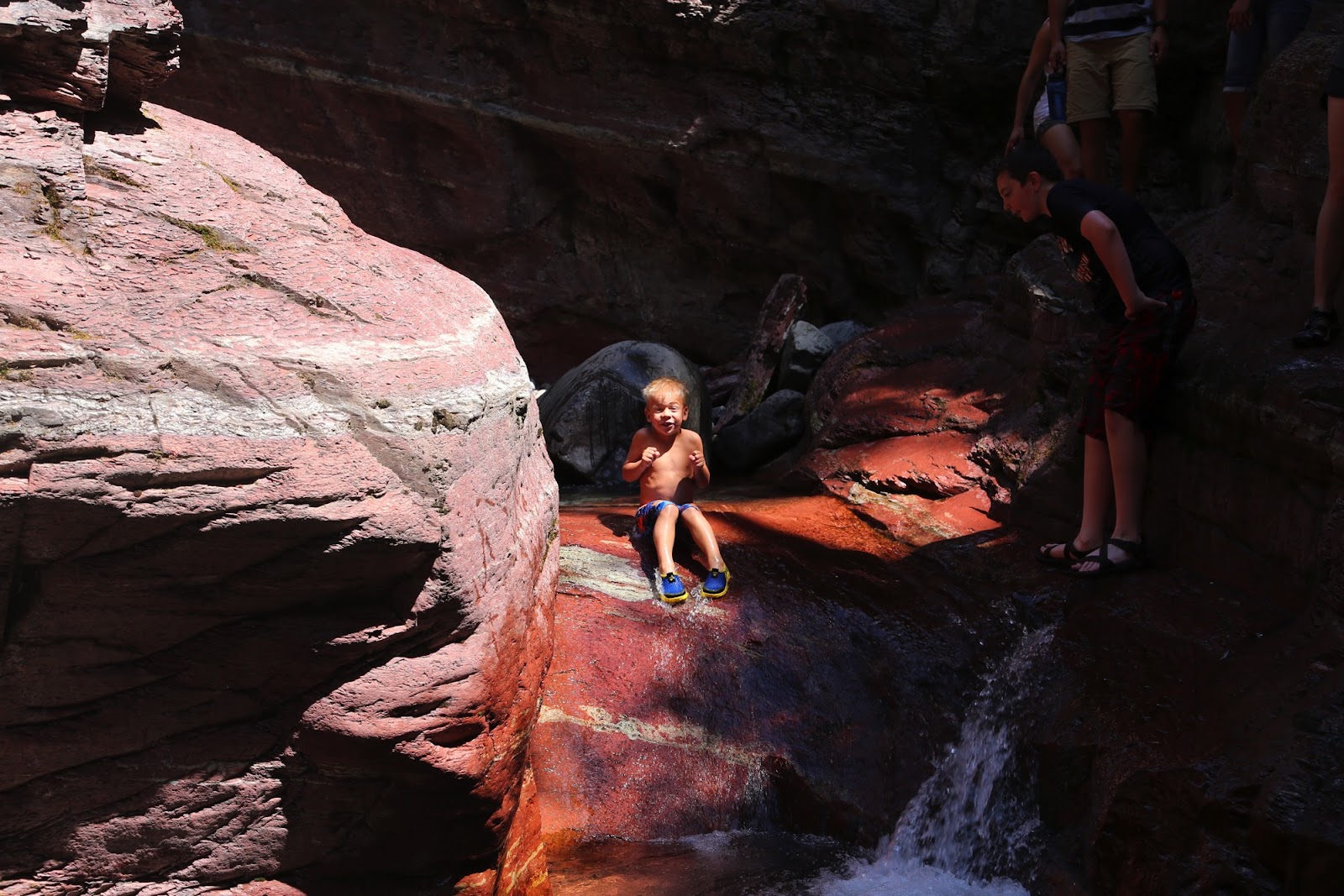 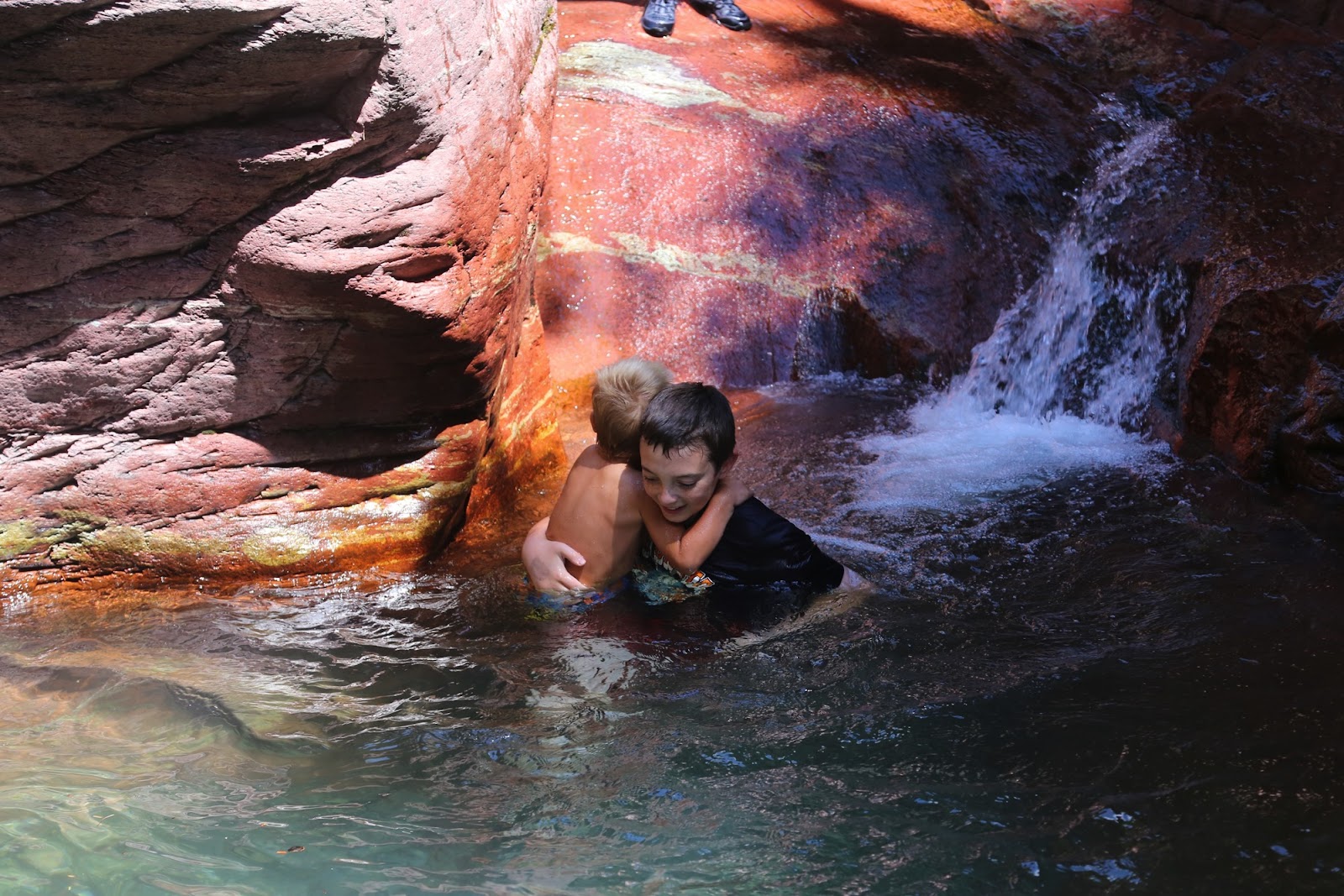 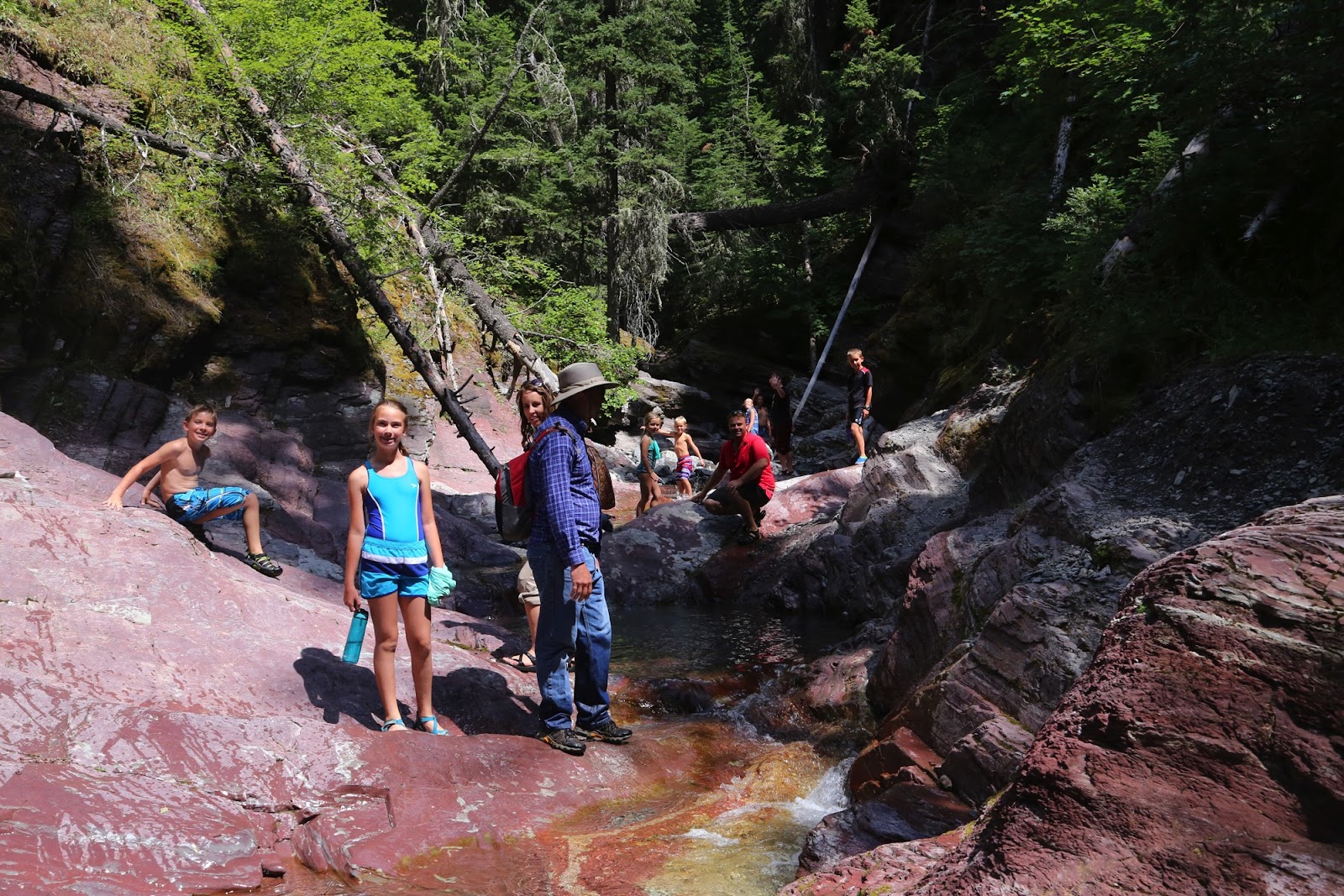 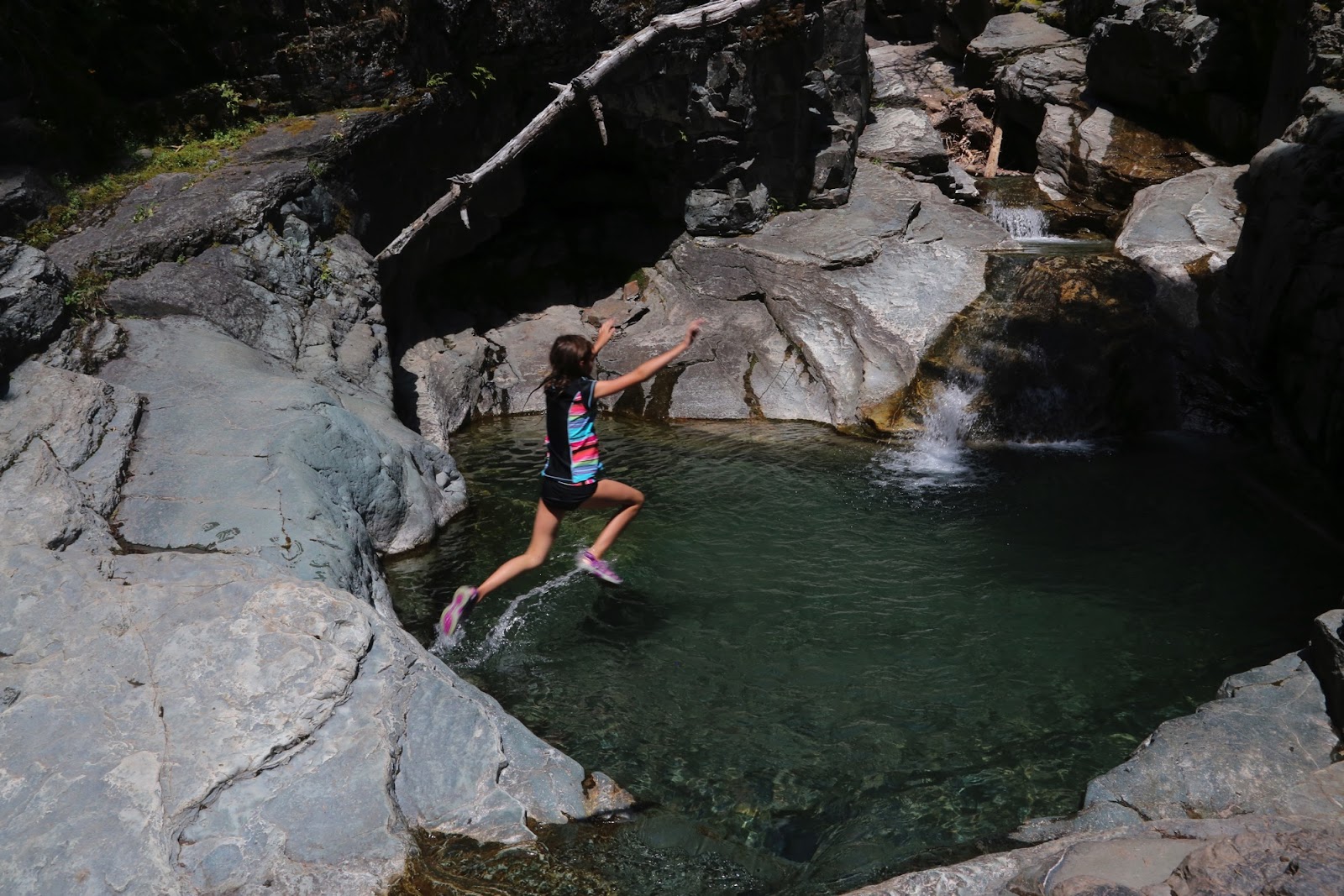 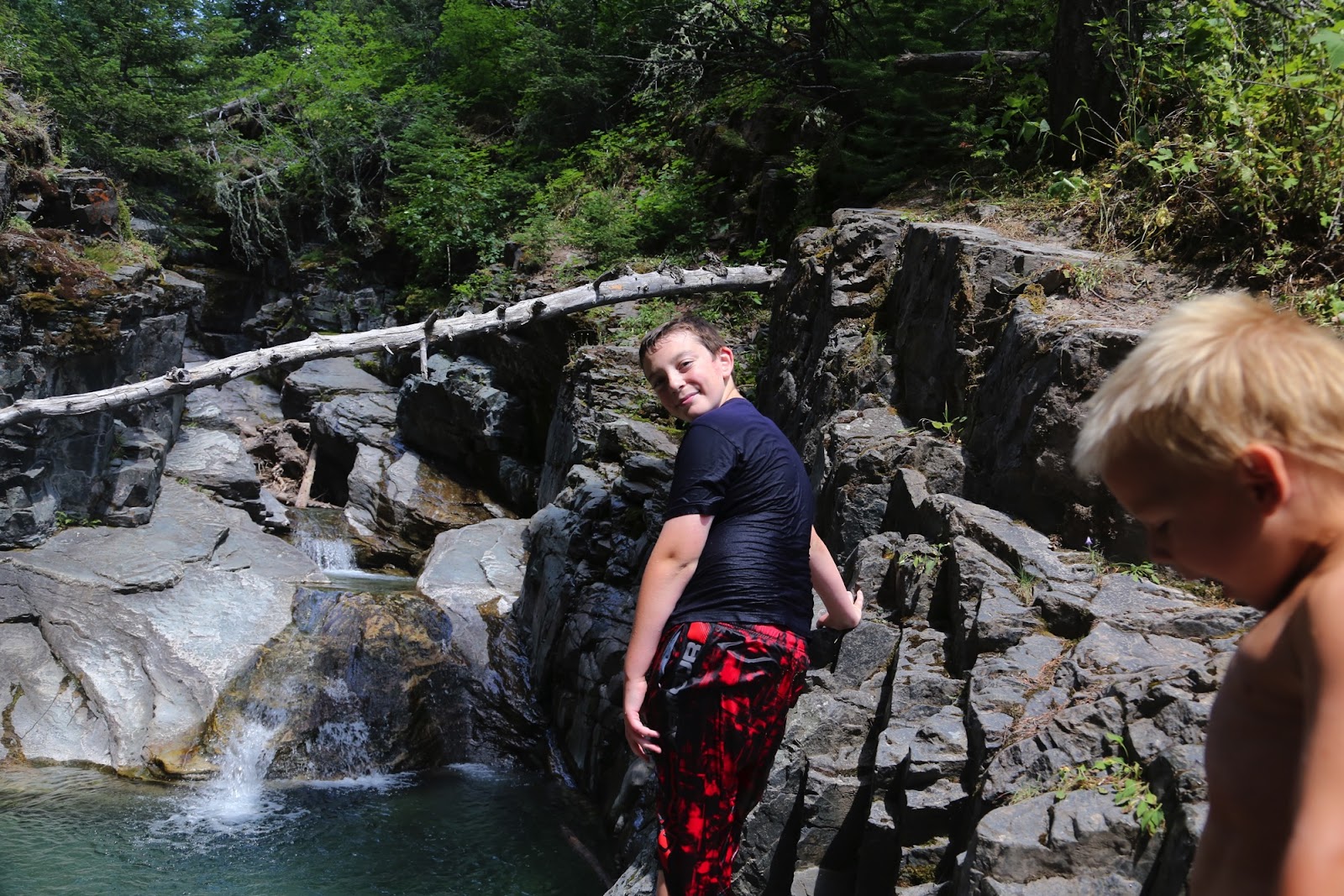 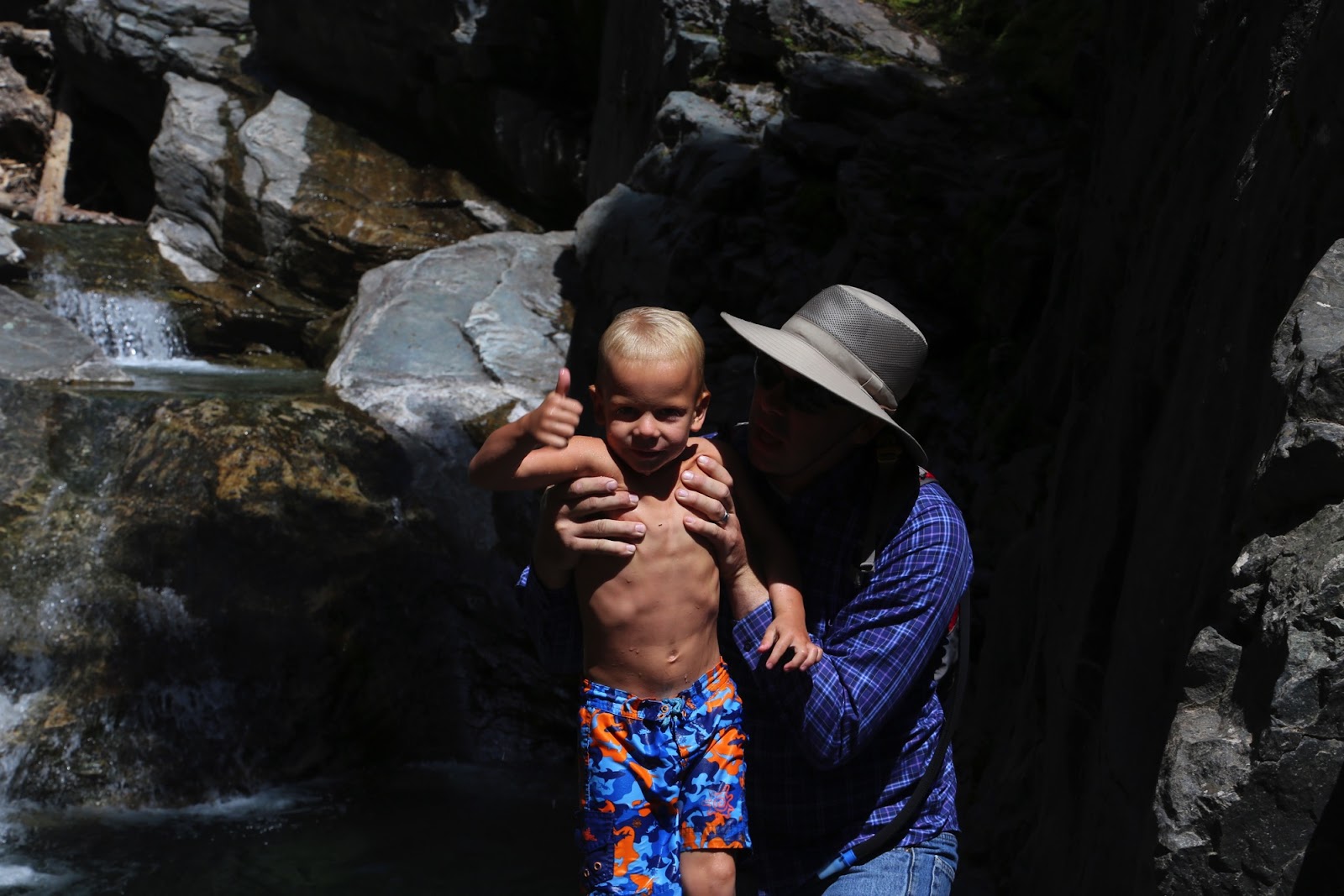 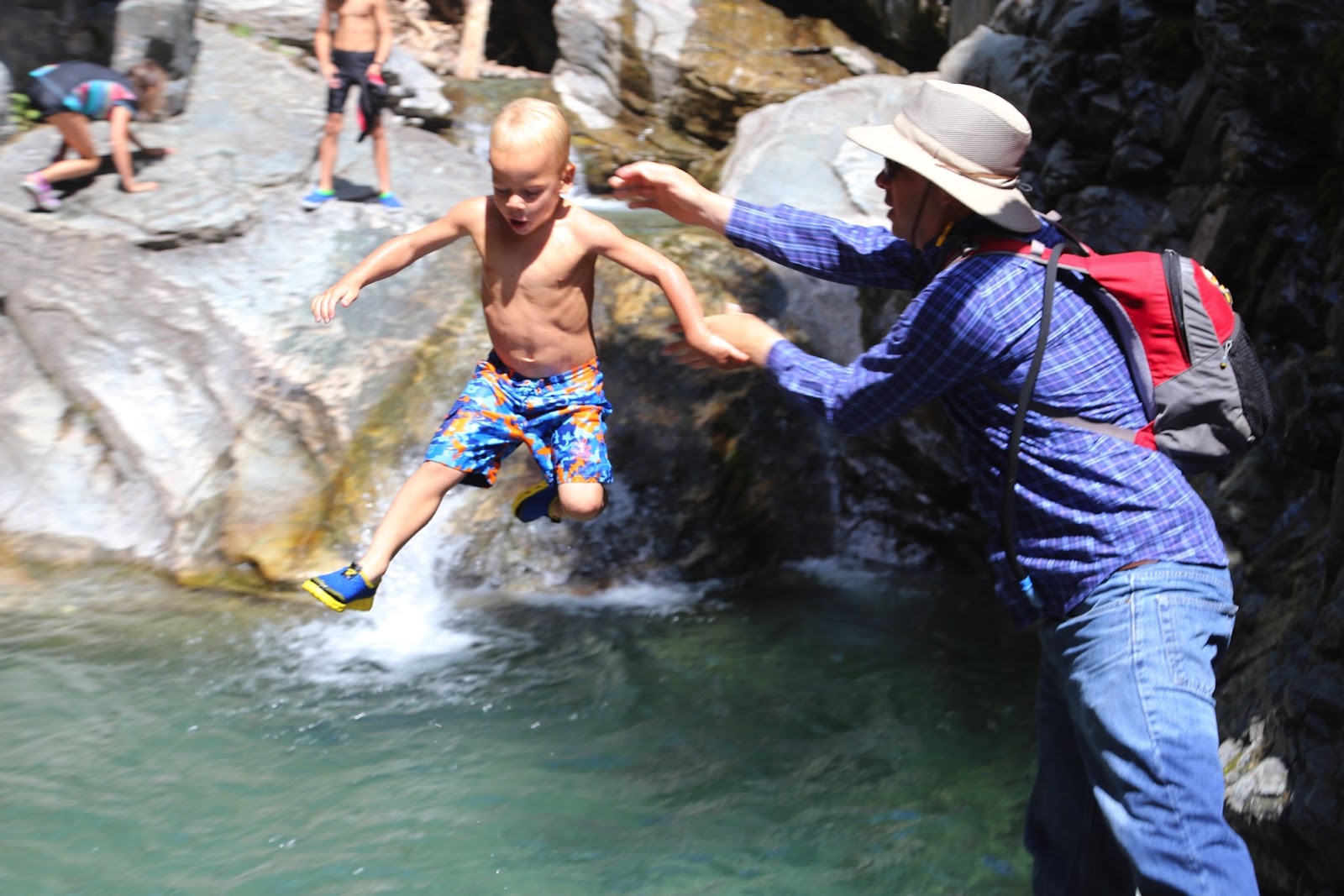 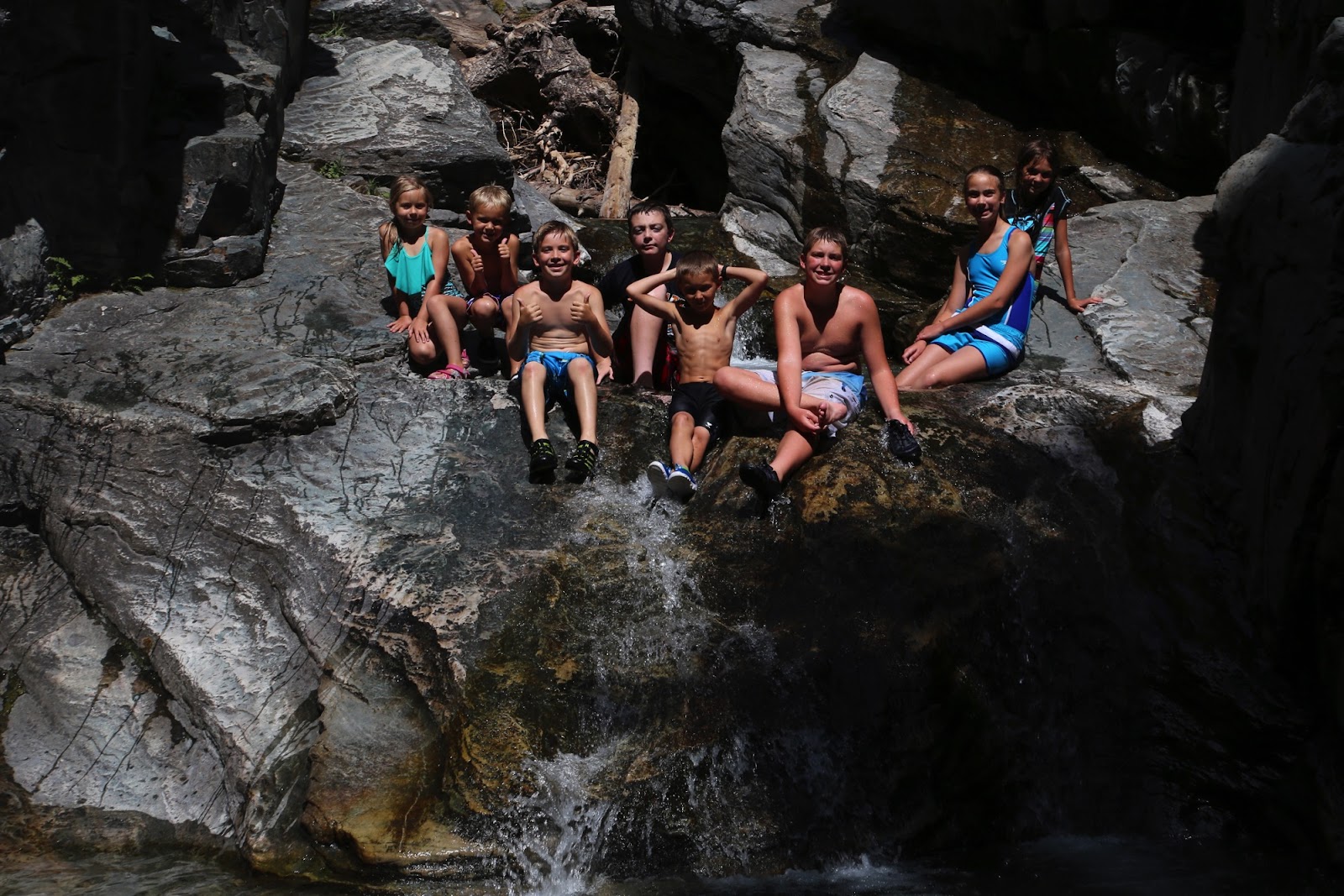 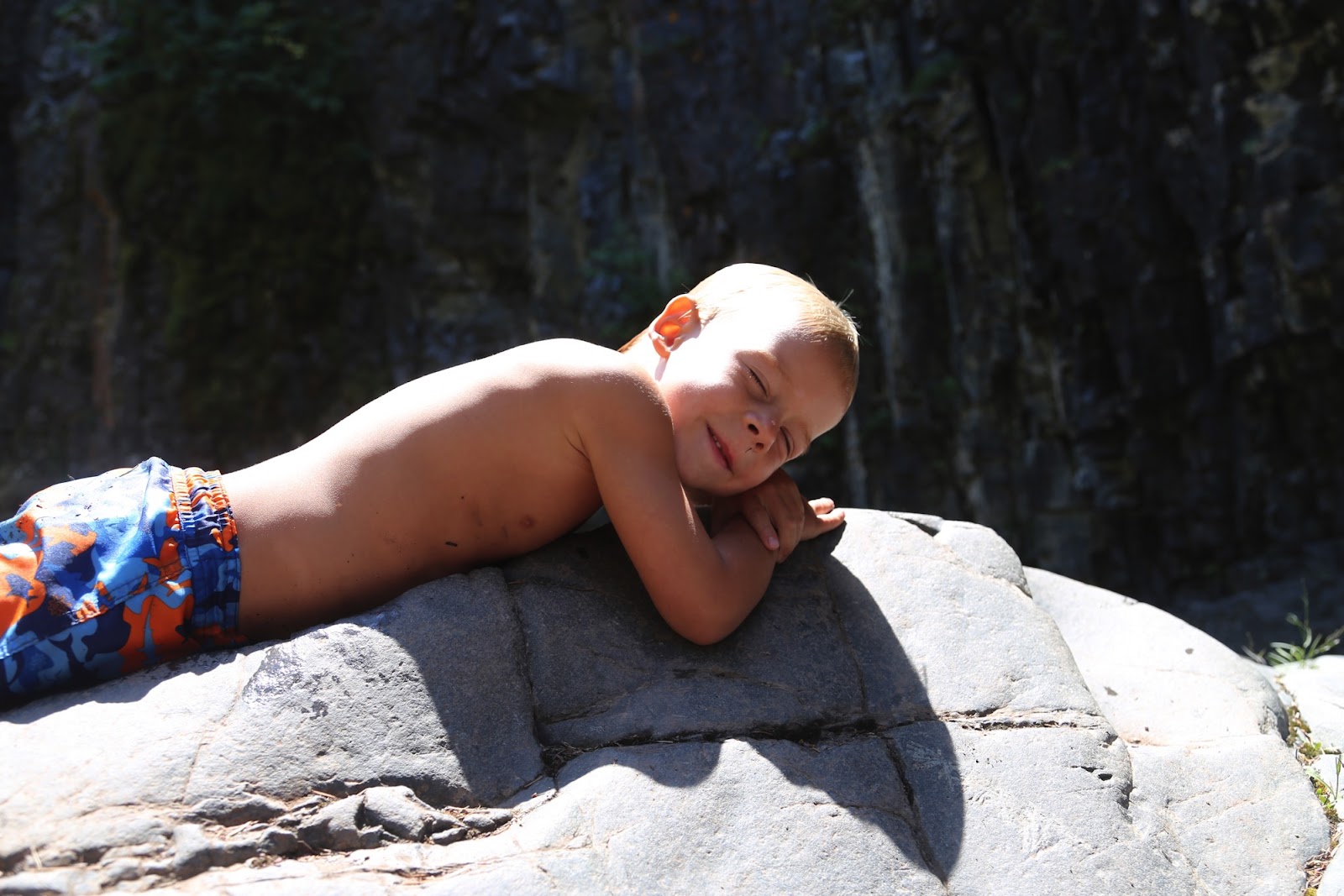 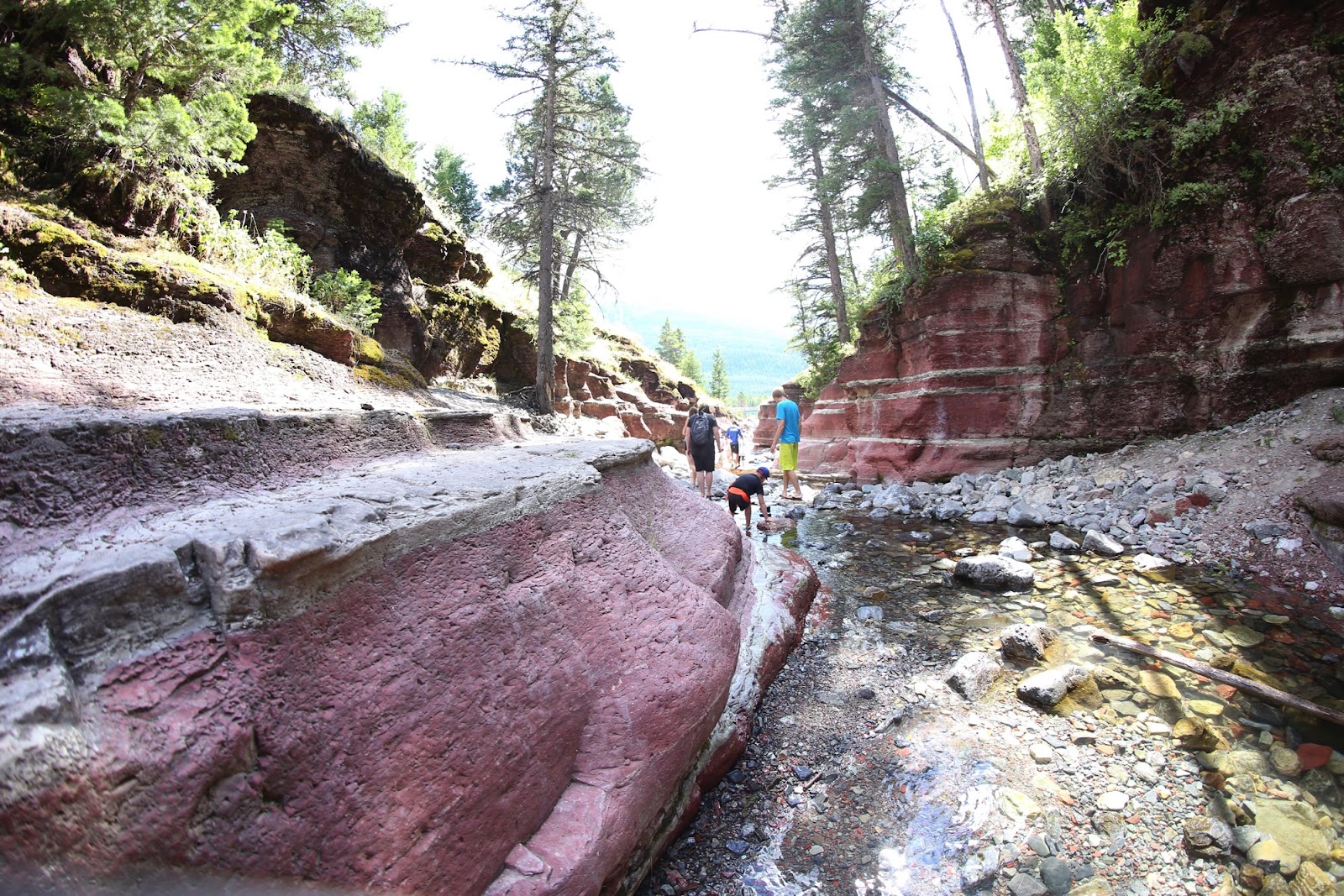 We headed back to the house for dinner and down time. Later that evening we headed back to the park to drive the south road through the park. The road followed the river and the scenery was beautiful. We had all the kids in the van with us and they requested a Hank Smith talk while we drove. It was a great evening! The road ended at a beautiful lake surrounded by snow capped mountains. On the drive back we found another bear eating berries along side the road. Two bears at close viewing range in one day was awesome. We topped the day off with ice cream in the park village. It was a great visit to Waterton. 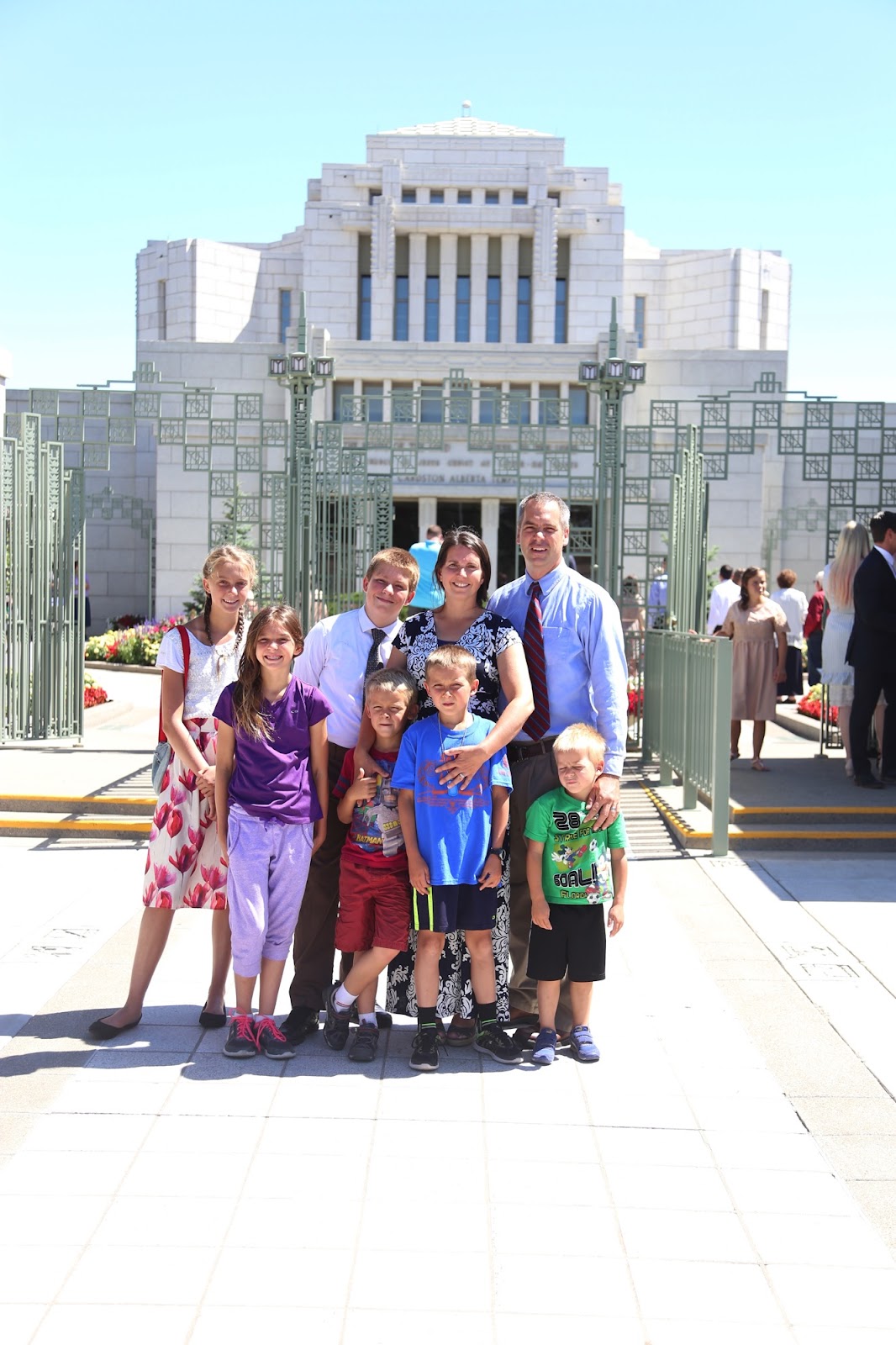 In the morning we all packed up ready to head on. But before we left for Banff we had an important stop to make at the Cardston Alberta Temple. This has been something I have wanted to do for many years! My Great Grandfather, Gerrit DeReus was the first of his family to cross the ocean from the Netherlands. His family sent him to work hard, save money to send back so his parents and siblings could all make the same journey and go to Salt Lake. My dad, in his wisdom, printed off the history of my great great grandparents for us to read and learn how they joined the church and why they came to Utah. It was my Great Great Grandfather, Teunis, 50th birthday. His children saved their money to buy him a gold pocket watch. As his birthday approached, his son Gerritt noticed the price of 1 ticket to the America's was the same cost as the pocket watch. The children decided it would be a good idea to spend the money on a ticket instead, but sought their fathers advice first. Their father agreed, a ticket to the America's was a good choice. He stated "what good is a pocket watch, when you can be with the Saints in Salt Lake, and become a forever family" There was no Temple near them at the time. So they decided together that Gerrit, my great Grandfather would be the first to go. They needed a sponsor to allow them to go, and since the missionaries in the area were from Canada, he received a sponsor to go to Canada. He rode the train across Canada and arrived in Cardston, a Mormon community, were the Temple was underway. He acquired a job at the Temple as a carpenter, which is the job he had in the Netherlands. Who knows maybe we touched some of the same wood inside the temple. It was here in Cardston that he became friends with the man that would later introduce him to his wife, the man's sister. Gerritt earned enough money, along with what they saved in the Netherlands, to bring his siblings and parents over to Salt Lake just a few years later. We all enjoyed reading the story of my great great grandparents and their love and faith of the Gospel of Jesus Christ. 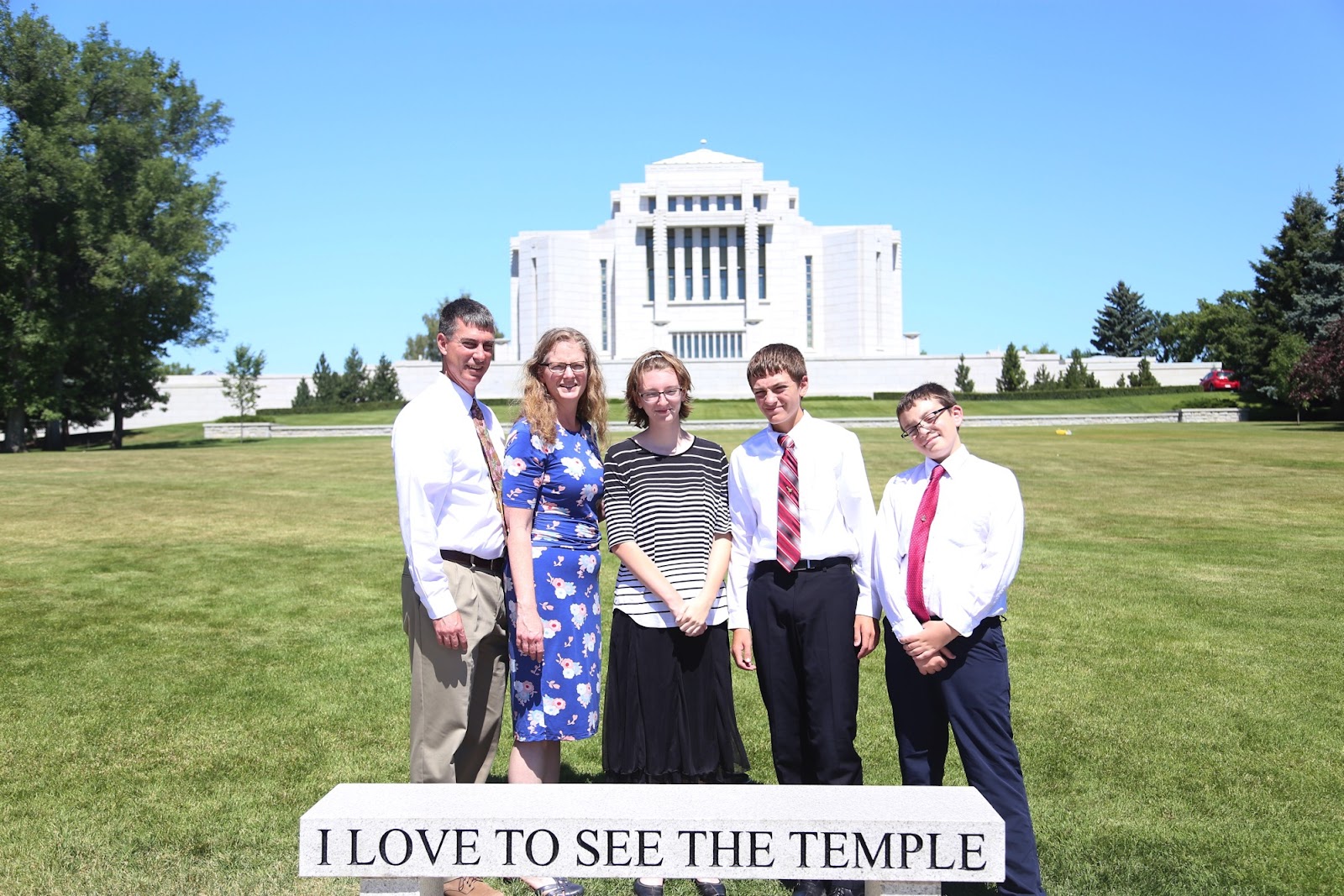 At the Temple we left Isabel and the younger kids in the trailer watching a movie, while the adults, and 12+ year old kids went to the Baptistry to do work for our ancestors. I had spent some time researching my dutch roots and came up with a few DeReus names that still needed work, and several cousins from my dutch side that needed work. We did almost 30 names, all I could find and verify. The baptistry was beautiful and we were told each of the oxen were uniquely hand carved from stone. It was a special experience to be in this Temple helping to make forever families! 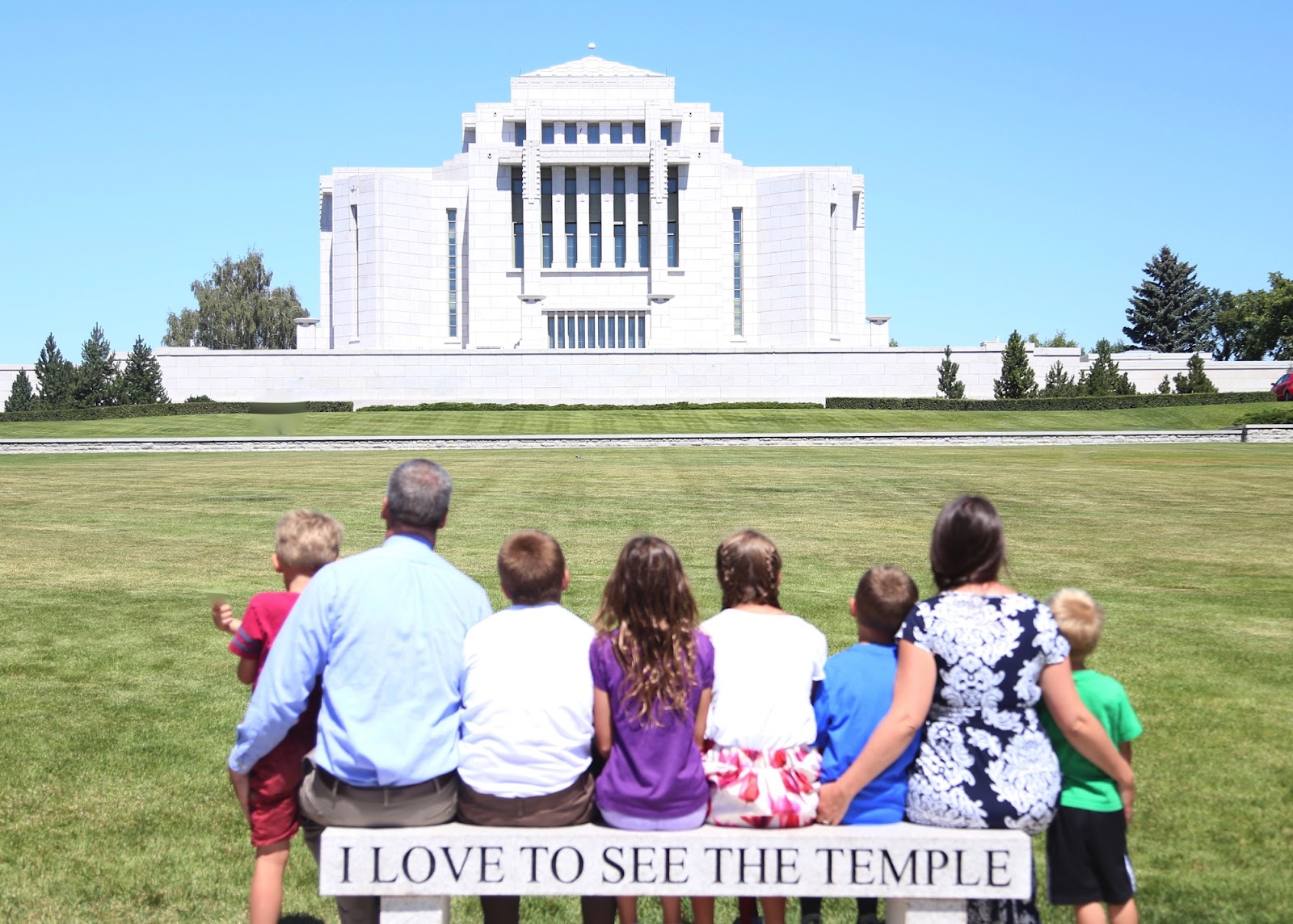