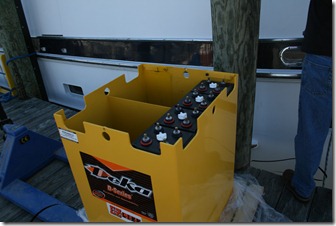 This was one of our large projects, and the last one we were waiting on before we could leave the area.  We were upgrading the power system of the boat with a new mega battery—as I am calling it.  Along with a new inverter, charger, and alternators, we should be able to cut our charge time to a minimal amount  This means the amount of time we need to run the generator each day to re charge-when out at anchor will be down to 2-3 hours.  We had been running them 9-10 hours, half in the morning and half in the evening. 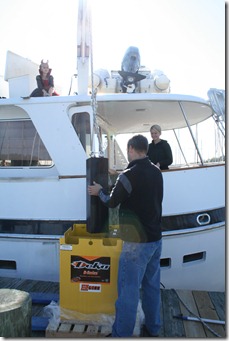 Plus the new battery will be able to run more things on it then our old system—like our new washing machine.

The battery was suppose to be delivered on Oct. 17th, but was delayed.  Thankfully it was delivered to us early on the morning of the 31st.  The battery was built on order, and are normally used in forklifts and pallet jacks and such equipment.  The company we ordered from had never built one for a boat-that they knew of.

The battery has 12 cells and had to be split into each cell to get it on board.  We moved the boat over to the working dock at the Marina so that it was a short push from the parking lot to move the battery alongside the boat.   Then each cell at a time was hoisted out of the steel box and onto the back deck using the crane. (Boy we have used that crane for all kinds of projects!)

Since it was Halloween Savannah, in full costume, was the 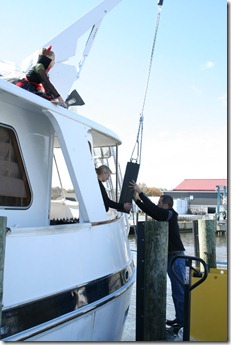 crane operator up on top.  She controlled the crane, moving it up and down with the remote controller.  David and Kylynn then moved the cells aboard.

Once on the back deck, we used a dolly to move the cells from the deck to the front stairs, and then lifted each 150lbs cell down the stairs, one step at a time to the hall by the engine room where they would be installed.  Once the cells were down, the Marina sent over 3 workers to help carry 200lbs steel box from the back deck, down the stairs and into its resting hole in the engine room floor.  David was a little worried it wouldn’t fit.  But it did.  He had measured and re-measured as he built a frame for it to rest on in its hole.  It fit perfectly.  Then David and Kylynn, using a board for leverage, lifted each cell back into its place in the battery box.

Next it needed to be hooked back together and then connected 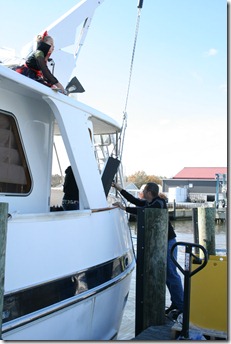 to the inverter and charger and to the electrical panel. By Wednesday it was done, completed, and we were ready to head south. Although David consulted an electrician in his planning phase, he designed and installed the system all on his own.  I am continually impressed by his abilities.