One of my favorite places we have visited is Cumberland 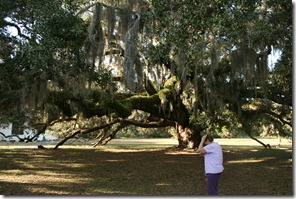 Island, GA.  You can see Florida from  little tip of South Georgia. The island is now a National Park and Seashore, and has a great history. In recent years large portions of the island were owned by the Carnegie family of New York as their private winter getaway.  In the late 1800’s and early 1900’s They built 3 mansions on the island, one of which has been restored by the National Park Service and is available for tours.  As part of their donation of the island to the Park Service, The Carnegie family asked that their horses be allowed to roam wild on the Island.  So as 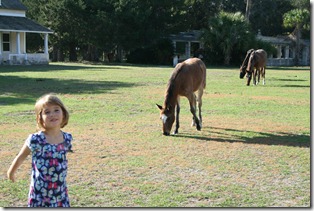 you hike or ride bikes around the Island you see the horses often.  It is a very pretty Island.  It has beautiful canopy of gnarled live oak trees with spanish moss hanging from the branches.  It has a huge shoreline of sandy beach on the ocean, and a wooded shoreline along the river.  We were able to anchor in the river just off the island and enjoy the area for a few days.

Matthew came down with the croup while we were here, so 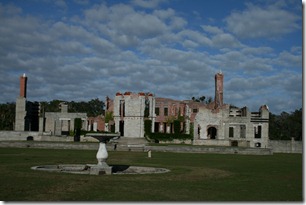 Sunday morning, not wanting to repeat a long night of listening to Matthews shallow breathing and coughing, David and I found ourselves in the dinghy crossing the inlet between Georgia and Florida headed to the nearest urgent care that we could find open on a Sunday.  We paid to dock our little dinghy at a Marina in Ferdinand, FL, less than 5 miles where we were anchored.  From the marina we took a taxi to an urgent care center where we waited to see a Physician's Assistant who ignored Matthews 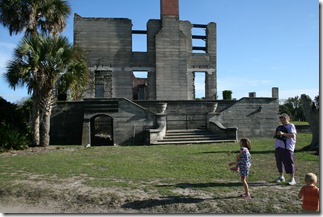 shallow breathing and the fact that I told him he had a bark cough all night.  He suggested that he probably has strep “…because it’s going around.”  At this point I asked if he would run a quick strep test, at which he replied “No, because it is 30% wrong.”  He then wanted to give us a prescription for strep rather than a steroid for the croup.  Now I was upset.  First of all, strep in children under the age of 2 is extremely uncommon.  Second, he had no signs of strep,a little red in the throat but no white bumps. What he did have was all the signs of a viral respiratory infection—which causes croup.  I asked the PA why he didn’t think it was croup, and he said “Well he’s not coughing right now”.  And as I reminded him, croup presents the strongest at night, so he’s not coughing much now, but at night it’s terrible.  Still ignoring me, he wanted to write his prescription for strep.  I asked him which antibiotic, expecting amoxicillin, but he wanted to give him a non penicillin antibiotic, claiming that penicillin antibiotics aren't working on strep anymore.  I was starting to wonder why we were here with him, DR’s have prescribed Penicillin for strep for decades and decades, and still do.  I was totally bewildered by this guy.  Finally he said," “forget it, I’ll just give you the steroid, it’s all you want anyway” and he left the room.  David, was concerned that maybe he was right and we were wrong.  I was pretty darn sure I was right, but if David wanted to get the antibiotic too, than fine.  I did remind him though that he wasn’t prescribing the $4 antibiotic, but one in the $75 dollar price range.  David went out to talk to the PA and he sent in a prescription to Walmart for both medications.  We paid our $85 fee and left.  Writing this now, makes me want to write that clinic a letter to let them know how terrible that PA was.

After 1 day on the steroid Matthew’s breathing and coughing was sooo much better, I didn’t need the steroid anymore.  I had started him on the antibiotic at the same time “just in case”  but after 2 days he had terrible diarrhea that I had to take him off it.  And he just got better and better.  No one else came down with strep throat—but Benjamin also had a little cold too.  So I am now positive that PA was just wrong.

After that crazy Sunday, I still love that visit to Cumberland Island.  We spent another day there seeing more of the Island and enjoying its beauty.  You can camp on the Island by taking a ferry over to the island.  I don’t think I would have ever visited this pretty place had we not been passing thru on RCabin.  The kids, of course, earned a junior ranger badge during our visit here.