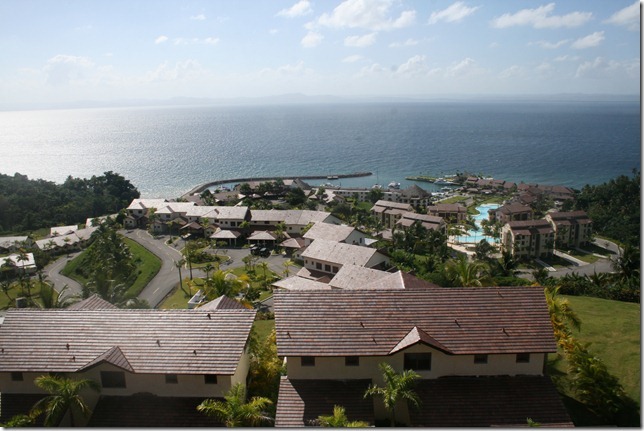 We spent 2 weeks at Puerto Bahia Marina on the beautiful Samana Bay.  We witnessed gorgeous, stunning sunsets every night. 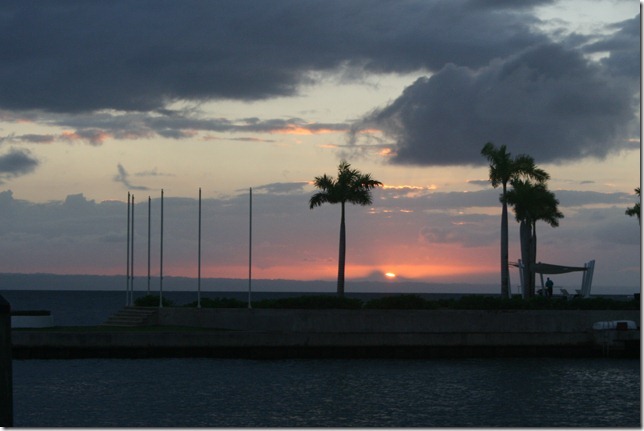 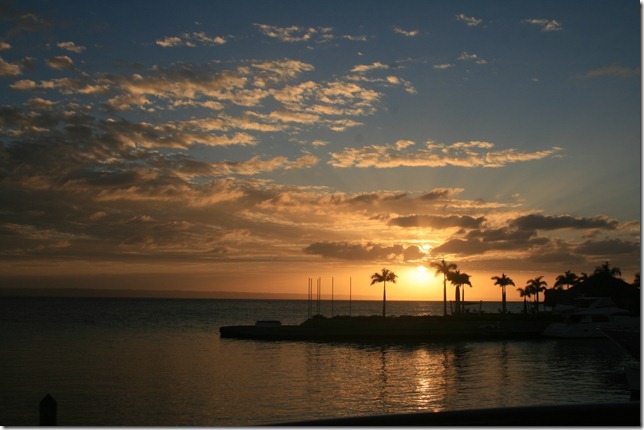 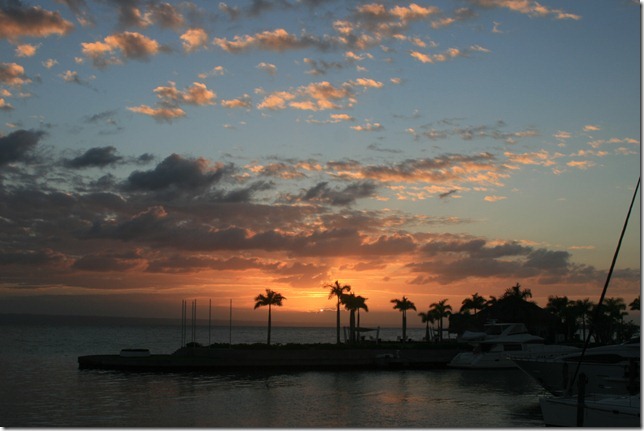 The town of Samana is about 3 miles away from the marina on a winding mountain road. The first time we went to town by boat, in the tender.  But with choppy water it was a rough ride.  So the next trip into town we decided to use the scooter we have on the boat.  The scooter came with the boat when we purchased it.  It is a cheap scooter, but has come in handy making quick runs to a store for parts or to pick up a rental car.  There have been times when anchored we wished we could get the scooter down and use it, but only when we are dockside are we able to off load it. 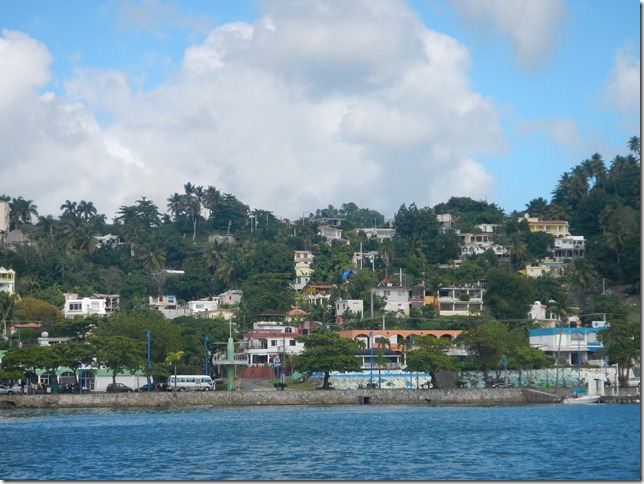 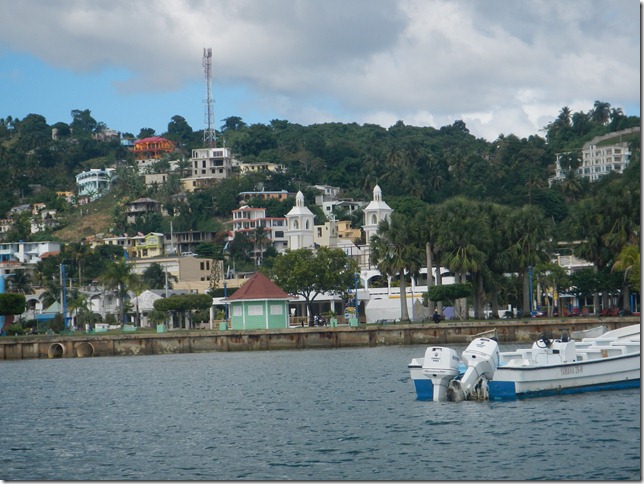 So we got the scooter off the boat and would take it to town often to shop or see what was going on.  It is not a large town, but it is busy with locals and often tourists from cruise ships.  Most people ride scooter or motorcycles, but no one wears a helmet. In fact David left his helmet on the scooter overnight, and in the morning it was gone, he went inside the hotel and was told they had brought it inside for security.  My thought was—why would anyone steal it—no one would buy it, because no one wears one.  Except us.  If they kids rode to town, they had to put on their bike helmets.  The roads are narrow and both cars and scooters swerve around each to pass who ever is going slower or stopped in the road.  Same with oncoming traffic.  I have seen a car pass us, with an oncoming car passing a scooter as well, and every one just tries to share the road and not get hit.  It is quite and experience, all on a mountain road going up and over to get to Samana or back. 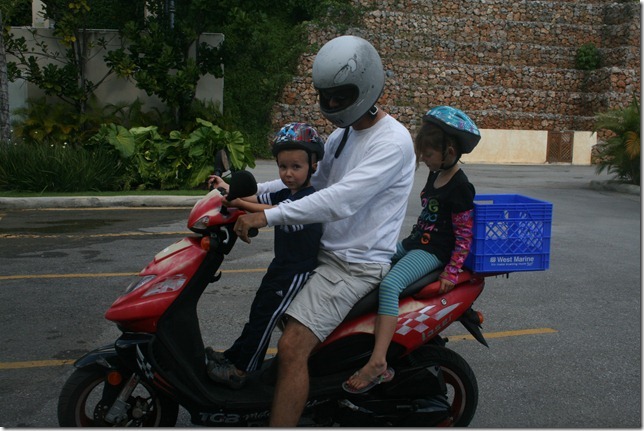 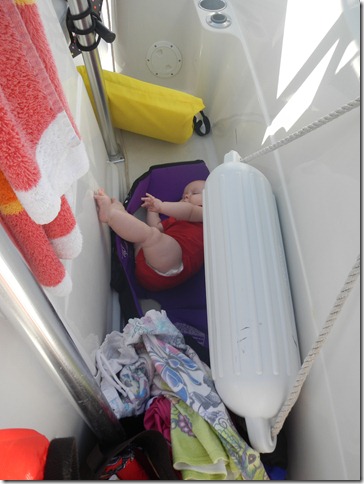 Just a few miles away, out in the bay is a little island—Cayo Levantado.  It is a pretty little island.  There are 2 or 3 resorts on the island along with a tourist flea market and some snack shacks and beach bars.  On the best side of the island is a great public beach.  When the cruise ships come they anchor between this little island and the town of Samana and a lot of the tourists come here.  We spent a few afternoon hours at this great beach on New Years Day.  Several little run about boats anchored off the beach and music was playing from them, and lots of people swimming in the water and playing on the beach.  It was a nice afternoon.  The water was pretty, but not even close to the beauty of the water of the Exhuma’s.  Alexander enjoyed sleeping and playing in the tender where I blocked him off in a little area to keep him safe. 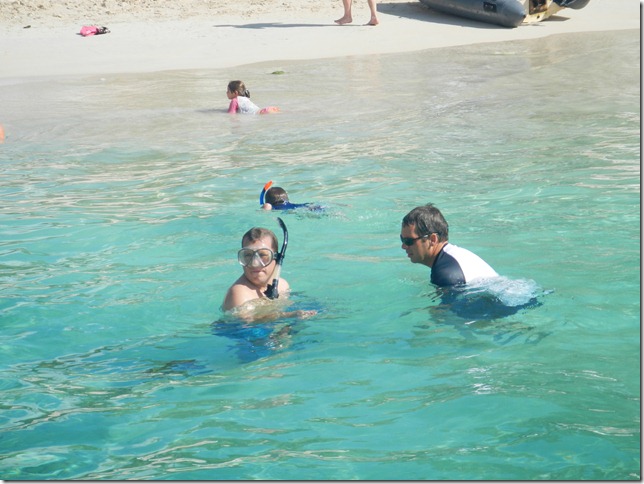 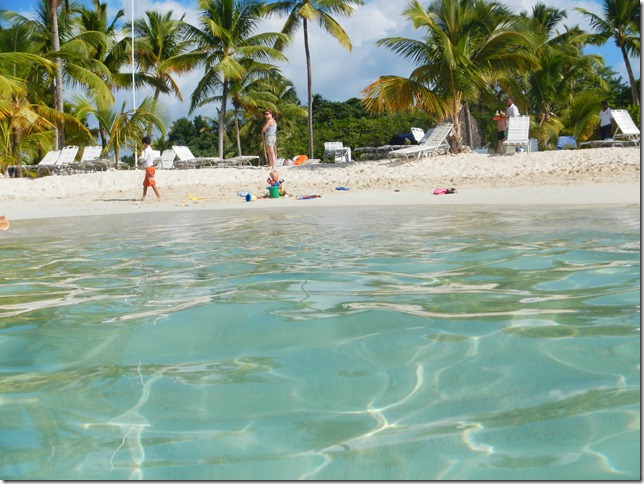 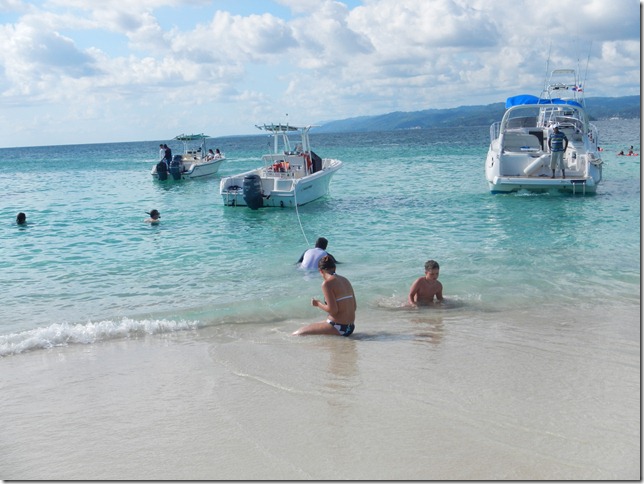 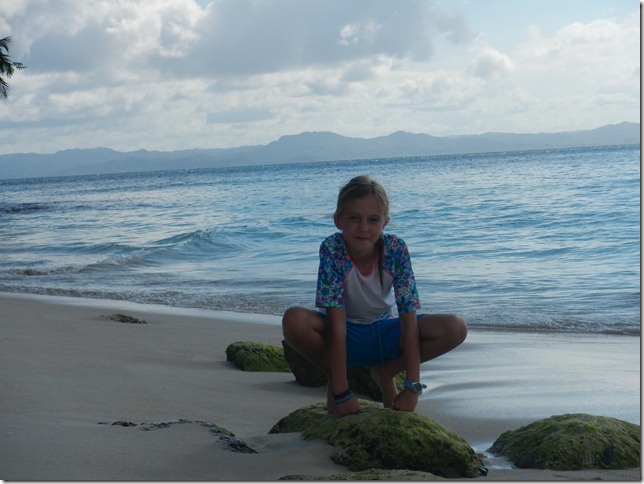 Our 3rd day there took Doug on a diving excursion.  He set out in the morning, and so did we—to the Los Haitises National Park.  Across the bay 11 miles is this gorgeous, remote National Park.  We loaded in the tender and set across the bay in a little overcast weather.  We had to wait out a little rain out in the bay.  We stopped, not wanting to go further in the storm, and just sat in the tender waiting for it to pass.  We have a couple of umbrella’s in the cabinet so we got those out and sat under them as the rain passed.  We were then greeted by a double rainbow.  Did you know that if you see 2 rainbows side by side, one is reversed—reflecting the other?  We have never noticed this, one of the kids, I think Isabel, pointed this out to us.  Next time you see a double rainbow, check it out. 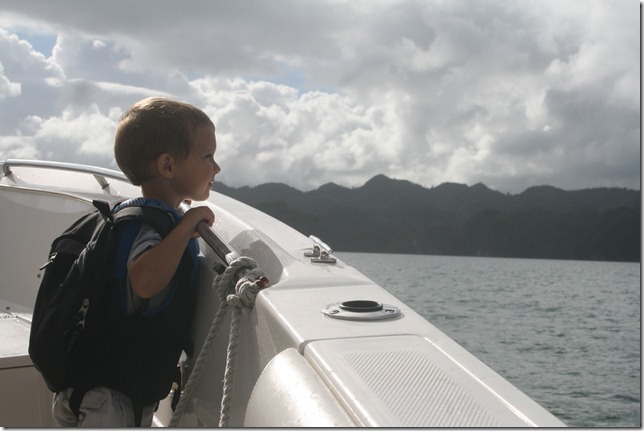 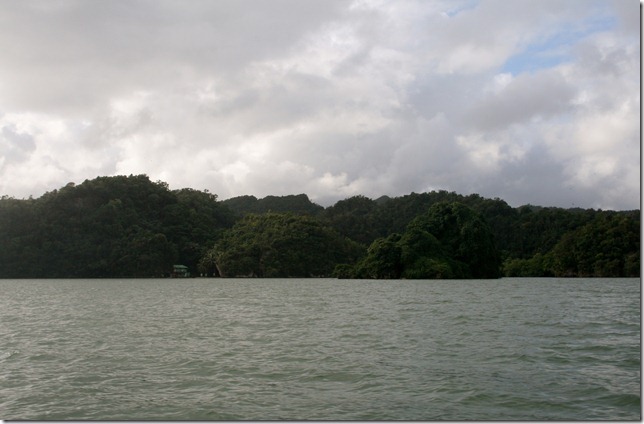 Once the sky had cleared we headed closer to land.  We were greeted with lush green, jungle hills.  It is beautiful.  We found a little dock and tied up and walked ashore.  The tide pulls in A TON of trash to this particular cove, and Isabel was just disgusted by it. 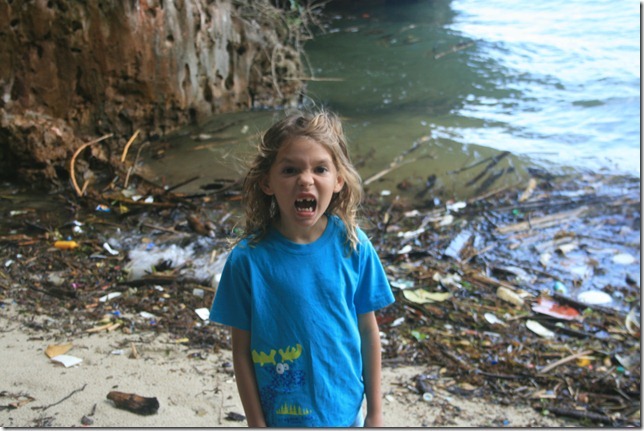 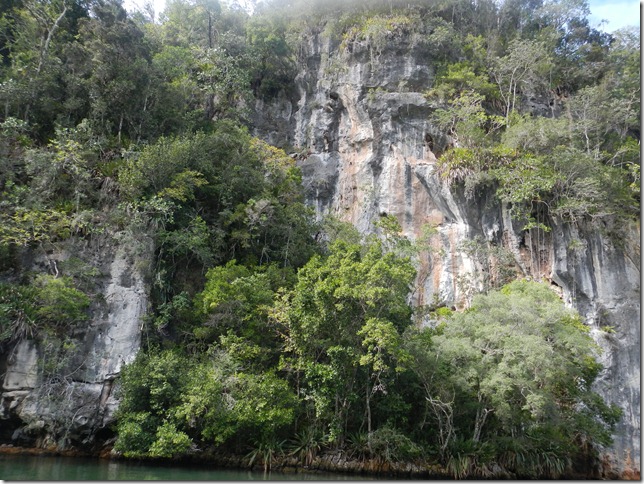 Ashore in this cove we found a trail sign and a trail to a couple of caves.  We had fun exploring them, even though Alexander received a little present from a bat—a little poop dropped right on top of his head—Am I a bad mom if I say “better on him, than me!”  Let’s face it, right on top of the head—It would be much harder to clean our of my hair, than it was out of his little bald head. 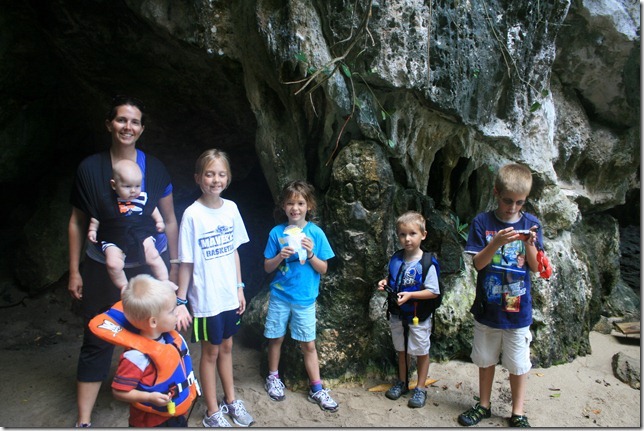 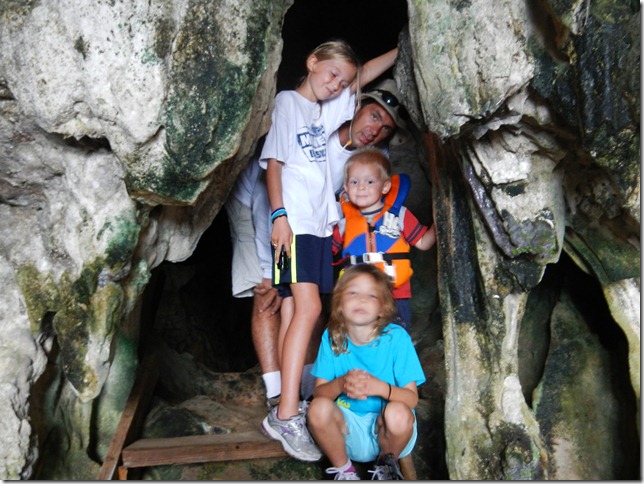 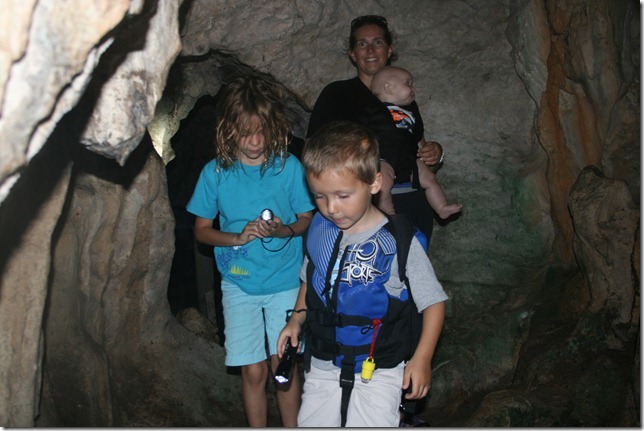 After we were back in the tender we found a couple of mangrove channels to explore.  They were beautiful.  In Florida and the Bahamas the mangroves grow like bushes, here they grow like 12 foot trees.  It makes it seem like you are traveling thru a jungle.  In fact we often felt like we were on the jungle cruise ride an Disney World and started telling some of the jokes from that ride as we journeyed along. 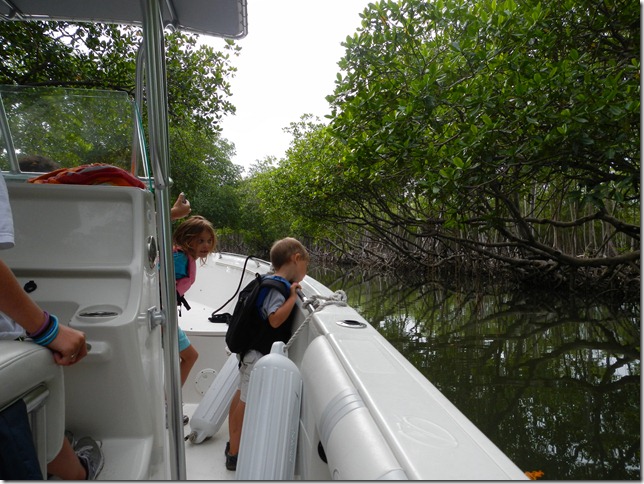 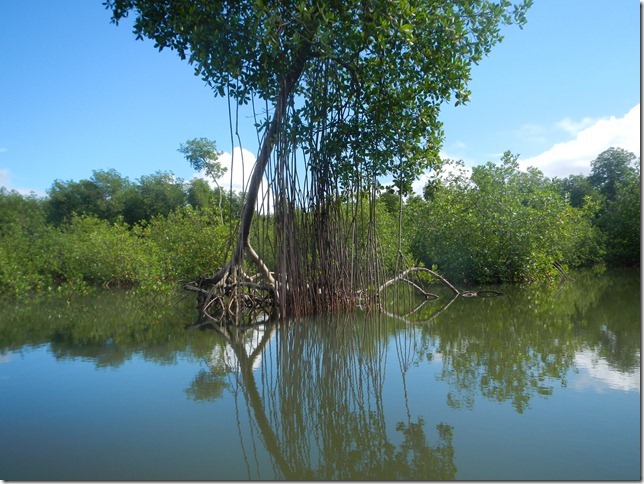 After our mangrove tour, we found another cave- Willy cave.  This cave had an information sign- in Spanish of course.  Luckily, we have Madison, who speaks Spanish, and she translated for us.  In the 1960’s – 1970’s the Willy family lived in this cave, in fact the mom gave birth to 2 kids—in the cave. Now that is a strong woman.  The cave had little signs that told us which room was which, like the living room, or the kitchen.  I much prefer my house over a cave—especially with the amount of bats in that cave. 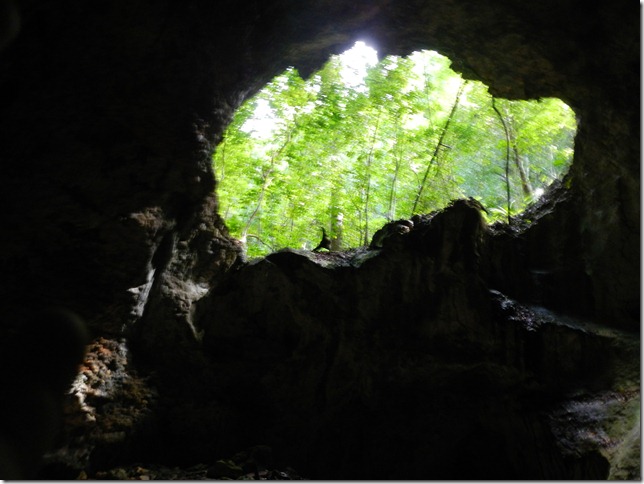 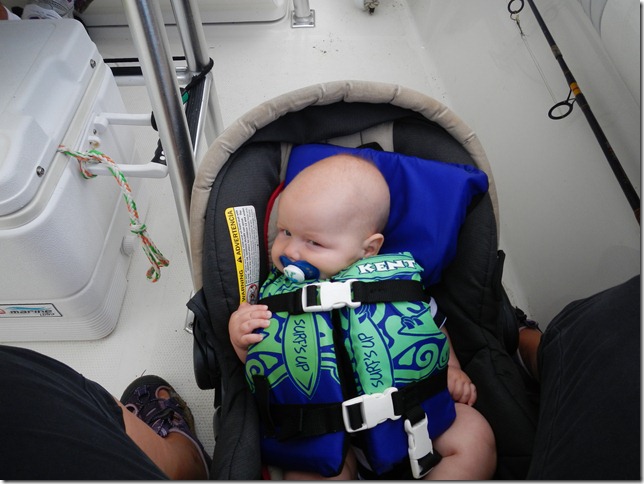 Our charts for this area are sparse, they don’t show much.  And there’s not a lot of info in any books or on the internet, so really we just found things by simple exploration.  We happened to see another boat head down a little channel, so… we followed.  We ended up at a small dock where a park worker was collecting a small fee to hike down a short trail to see the big cave with petroglyphs from the Taino Indians that lived here over 500 years ago.  There were lots of petroglyphs with signs of interpretations.  There were petroglyphs of whales which show that for hundreds of years the whales have been visiting this area.  There were 5 or 6 walls with petroglyphs drawn all over them. 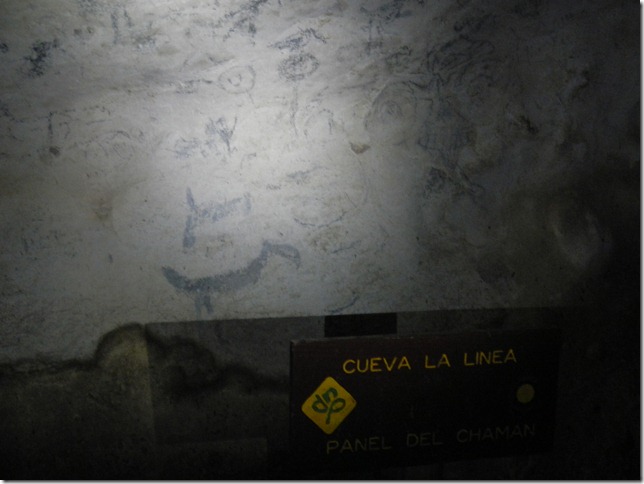 After we left that cave I had planned to ask the park rangers what else we should see in the park, but when we arrived back at the dock, they were gone.  We are not sure if they arrived with the other boat that had tourists on it, but both were gone.  We explored another little inlet and found again another dock, this one was cement and decorated with shells.  But all we found ashore was a short trail thru the lush, humid jungle to a Lagoon and a little beyond.  I had read somewhere that in this park they filmed parts of Jurassic Park, and hiking on this trail made me wonder if a dinosaur would come chasing us soon.  We started to notice the mosquitos and the trail ended, so we turned back for the tender.

The day was getting later, and I didn’t pack more than a few crackers for the kids.  It was past lunch time so we headed back for the boat.  The ride back was a little bumpy and Matthew did not like it at all, he cried and cried, a combo of a hungry tummy, tired, and bumpy waves, it was not a good combination.  My back didn’t care for it either,  I noticed that night the muscles in my back were sore.

That afternoon we loaded up in the tender to look for the whale trench.  One of the places in the mouth of the bay where the whales like to “hang out”.  It is a deeper portion where they can dive and jump.  It was choppy and bumpy, but we suffered the ride in hopes of seeing whales.  The tours don’t start for another 2 weeks, but we hoped we’d get lucky and see the early whales.  There weren’t any and I was sad. 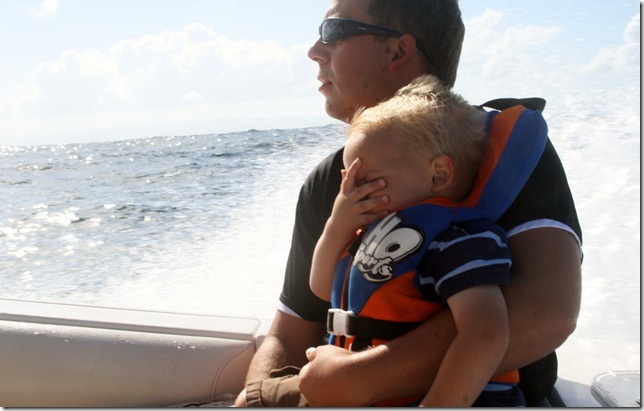 The next day, both Doug and Madison had flights home.  Doug to New Zealand, and Madison back to Idaho for Medical School Interviews.  They were on the same flight out of DR, which worked out nicely so they could ride the 4 hour drive to the airport together.  They had planned to rent a car for the drive, but ended up taking a taxi.  We were sad to see both of them go.  This meant David and I would be left to move the boat with just us and the kids.(hoping for flat seas).  It was so nice having Doug visit.  We loved having him on board, not just because he was a huge help with our 2 big moves, but we hadn’t seen him in a while and it was fun to catch up.  The kids loved getting to know Uncle Doug better and learning about him and his interests.  He made us some delicious Focaccia bread one night, which we all devoured as we dipped it in a lime infused olive oil from New Zealand.  He told us all about New Zealand—and we can’t wait to visit.

David and I will be waiting for a calm weather window to move the boat with just us and the kids on board… we’ll see what the weather brings us. 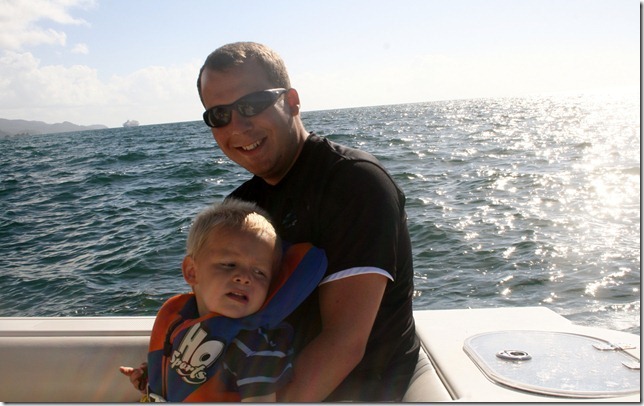