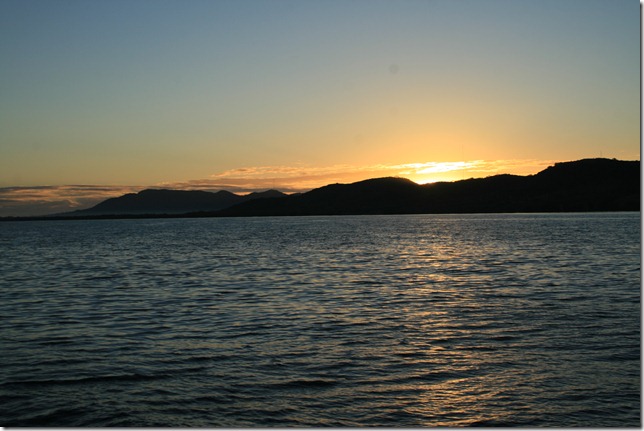 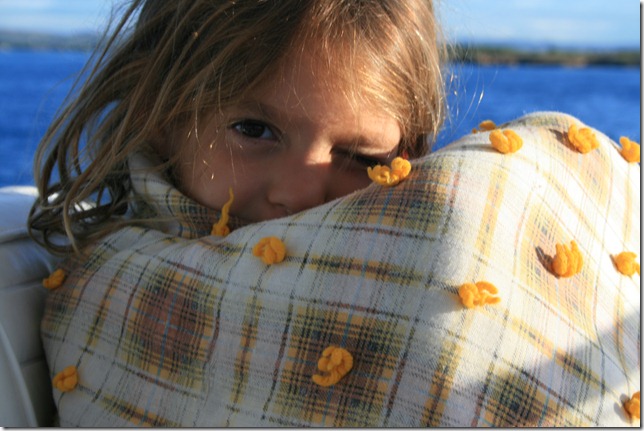 After Grandma headed back home, we returned our rental car, and the next morning, pulled up anchor in Boqueron Bay and headed around to the south coast of Puerto Rico.  Our first stop was La Parguera. A beautiful area filled with little mangrove cays.  We spent a few days in the area exploring.  To get there we left Boqueron Bay early in the morning, before the sun was up.  Three of the kids had been sick with sore throats and fevers for a few days, so it was a quiet trip with every one lazing around.  It only took about 3 hours to get there.  As we were setting our anchor the Police boat came around and circled us a couple of times before heading back towards town. 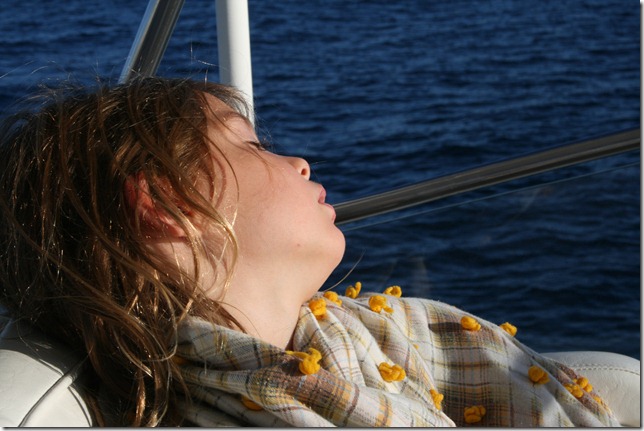 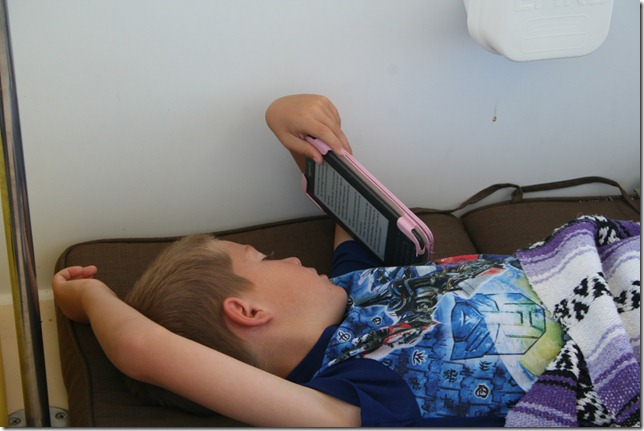 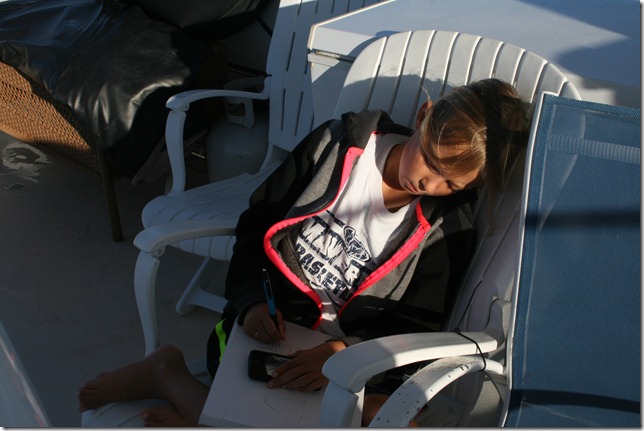 The town and water came alive with locals over the weekend.  Boats and water toys were running around everywhere.  Boats would line up off a little mangrove island, music blaring, everyone having a good time hanging out on their boats.  There is no beach at these little islands, but rocky reefs and snorkeling in shallow waters. 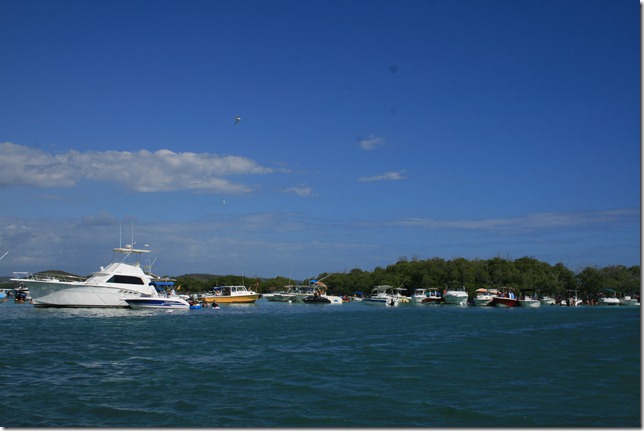 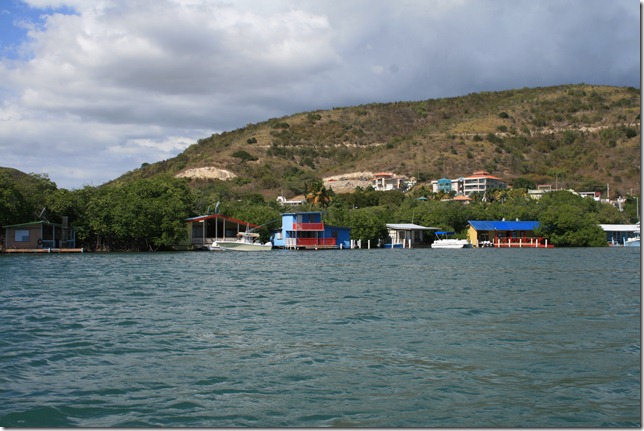 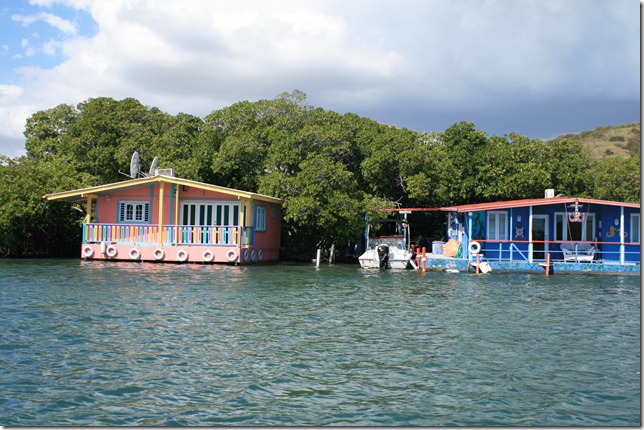 The town has these cute waterfront houses, painted with cute themes.  It really looks like a great town to visit on the weekends and over holidays.  I didn’t care much for the town of Boqueron, which also was a weekend party spot for the locals, but this town seemed much nicer, maybe better taken care of. 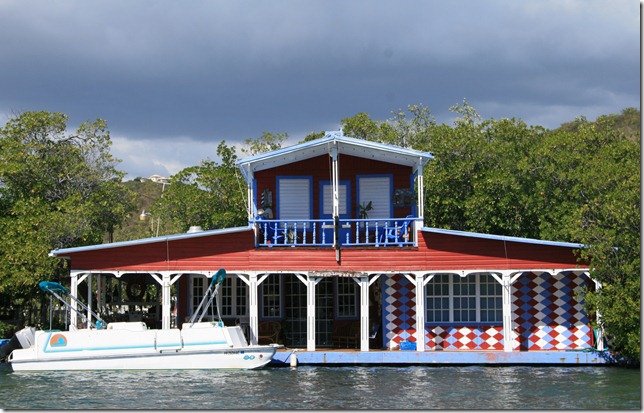 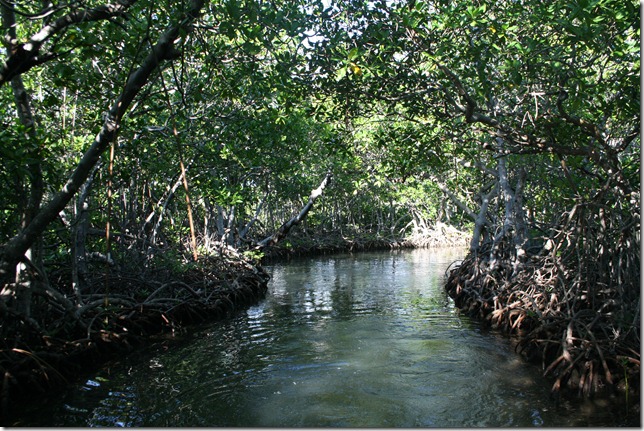 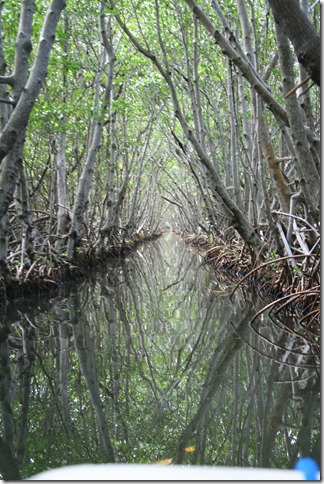 Nearby thru a few of the larger islands were mangrove channels.  Barely wide enough to let our small dinghy thru the canals, we had a great time exploring.  Limbs would sometimes hang low across the water and we’d have to duck and pull the dinghy under them. These narrow channels ran for a couple of miles.  We passes kayakers at one point, it is a beautiful area to enjoy. We had to go twice, the first time we took the larger tender and barely made it thru one section.  The second time, we went back in the smaller dinghy to do the find the other channels, and a good thing we took the smaller dinghy, because the other one would not have made it. It was a fun time. 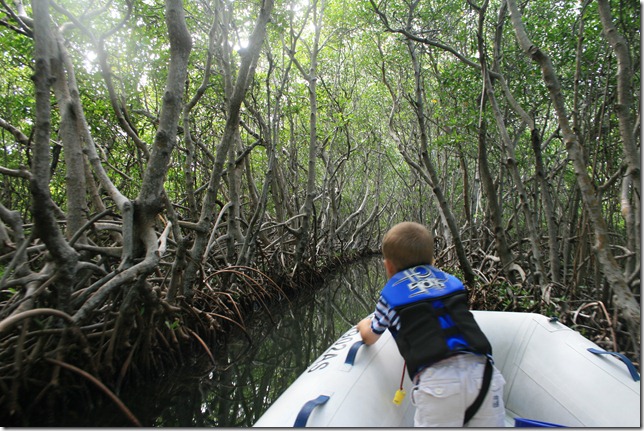 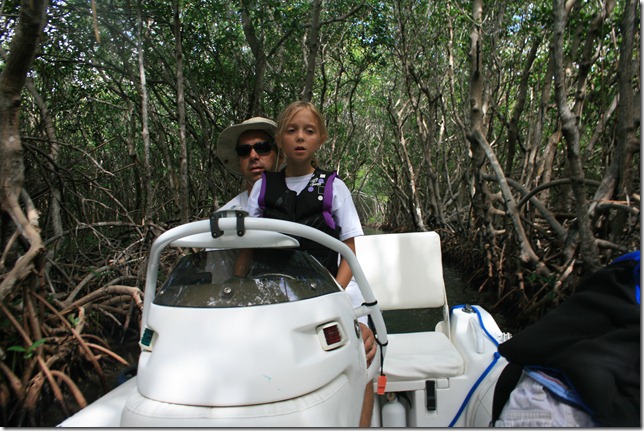 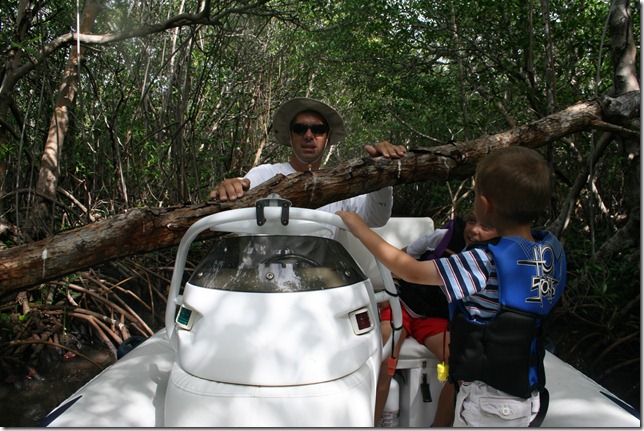 Also nearby is one of Puerto Rico’s famed bioluminescent bays.  Unfortunately we were there during a full moon cycle, which makes it not a great time to go see these glow in the dark micro organisms in the bay.  The moon was set to rise a little after 7pm, so we decided we should head to the bay right after dinner, while it was still darker out. 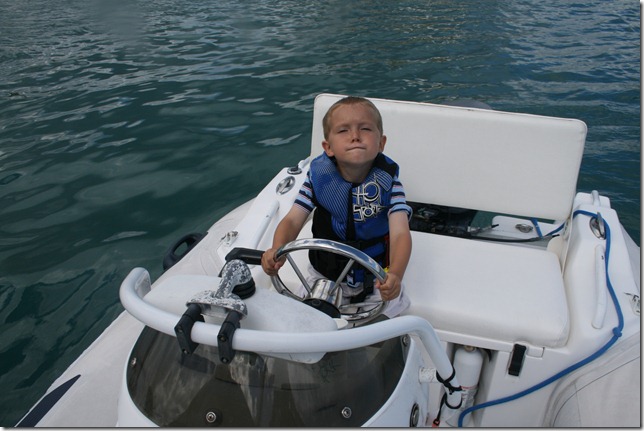 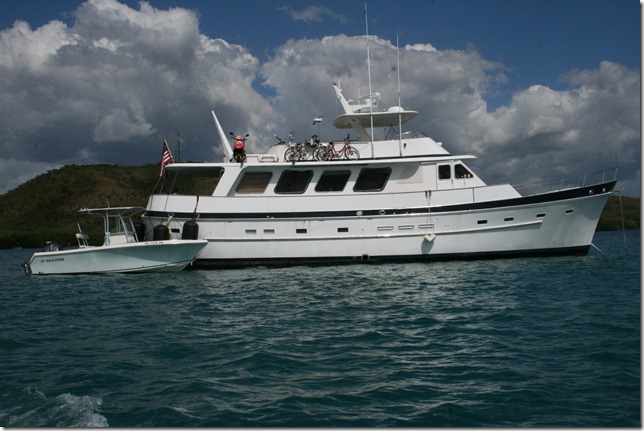 The kids had all been sick during out time here, so we had forgone the snorkeling in the area, but we didn’t want to miss the bay.  So we loaded everyone up in the tender and headed off to the bay, a little over 1 mile away from our anchored boat. 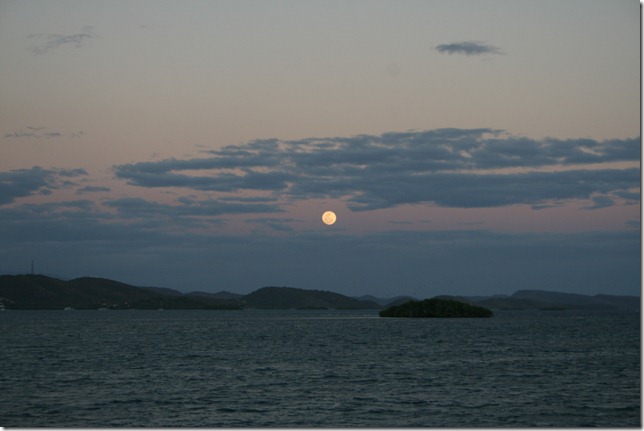 As we entered the bay we could barely see another boat in the dark further in looking for the bioluminescence.  Bioluminescence is made up of teeny tiny micro organisms living in the water.  When they are moved in the water they glow.  We have seen them out in the big blue ocean occasionally as we have traveled overnight, but just in little amounts.  Here in Puerto Rico there are 3 bays packed full of these micro organisms. 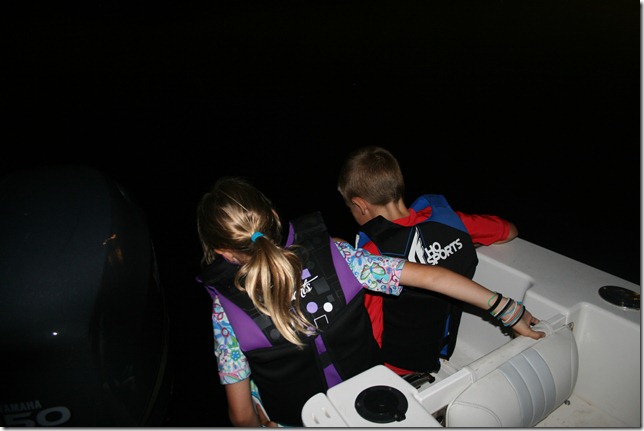 I thought as the boat moved thru the water into the bay that we would see the glow, I even looked back thinking the engine would surely make it glow, but all I could see was a cloud of white water.  What I didn’t realize was the “white water” was a whole lot of glowing water.  It was just hard to tell.  Once we stopped moving I reached over the boat and swirled my hand thru the water, and wow, it was awesome, like tinkerbells fairy dust.  A trail of sparkle.  Calvin and I jumped in for a swim in the fairy dust.  Savannah, Isabel, and Benjamin soon joined us to swim and sparkle.  It was a fun experience! Hopefully when we reach the next bioluminescent bay on the east side of Puerto Rico, it won’t be a full moon, and we can see it even brighter! 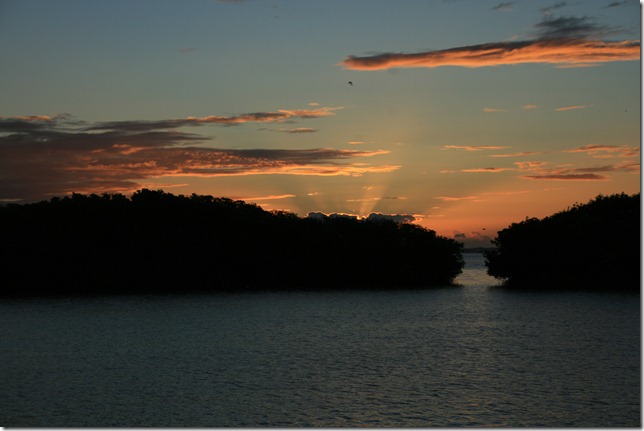 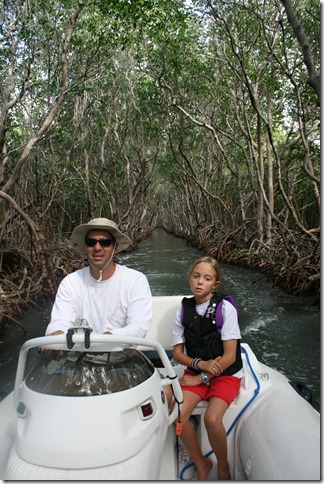