Things we did while stuck in Jacksonville

We did enjoy our time in Jacksonville, other than that train!  Although the kids never tired of watching to go by, I did—after the first night!  We visited some fun places there.  We even visited a couple of used bookstores to trade out some the books the kids had read through, for ones they hadn’t.  Both Savannah and Calvin are avid readers.  We love the library.  We have a couple of kindles, but ebooks are still as expensive as regular books and the ebook lending program at our home library in Meridian is still growing—so their selection is limited.  We have a library card from MD that my mom gave us, so that helps with the selection choices, but the 2 kids share a kindle, so we need regular books to tide the other one over.

We visited a couple of National Park sites in the area. We visited the Kingsley plantation.  They grew cotton here and you can tour their mansion and the remnants of their slave quarters.  They had over 20 buildings for their slaves that lived on the plantation.  One of the interesting things about this plantation is that it was run by Kingsley’s wife, AND she was a former slave.  We learned about life on a plantation and how each slave was assigned a task.  You did the same task everyday and it was your choice when and how long to take performing the task.  Maybe it was tending to a certain amount of the land.  Once you were finished with your task, the rest of the time was yours to spend how you pleased. 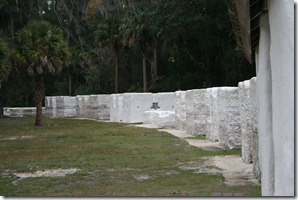 The slave quarters are just ruins now, but they are neat to see.  They are made from tabby, which is a mixture of shell and cement.  Many building in the south are made of this substance.  Most of the buildings on nearby Cumberland Island are made from Tabby as well.  It makes the outside of the building very white, and the slave quarters are a bright white.  They remind me of snow forts that I would build as a kid, except bigger.

While spending the morning at Kingsley Plantation, earning junior ranger badges, the rangers their told us about a festival that day at nearby Ft.Caroline.  Fort Caroline was built in the 1500’s by the French as the first French settlement within our US boundaries today.  They were having a small festival their to show what life was like in the French settlement at the fort.  It was fun to walk around and learn about the natives in the area at the time, the Timucuan Indians.  They occupied most of the surrounding areas and while visiting the sites in the area we always learned more about them.  We learned about the French soldiers that defended this fort and the people of the settlement. 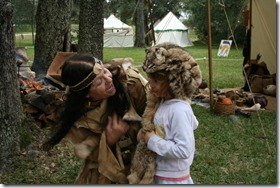 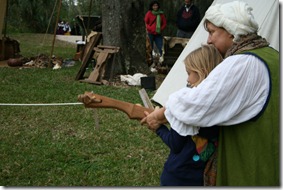 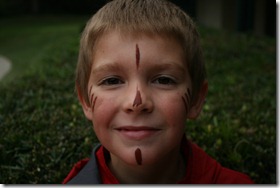