We spent Christmas in Vero Beach, FL.  We arrived on the 23rd planning to just spend the afternoon and evening there, but decided to stay thru the holiday.  We were expecting friends to arrive on Christmas to spend a week with us and figured Vero Beach would be a good starting point.  We would end the week in Stuart, a 1.5 hour drive south, so close enough to do a car retrieval for them. 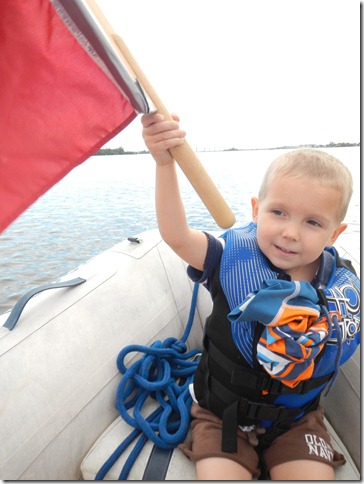 We were able to pick up a mooring ball in Vero Beach by claiming our “waterline” length was 55 feet.  our overall length is 65, but 55 is the max size this marina wanted to allow for swing room.  We tied up to the mooring and kept a close eye on our neighbors and found we had plenty of swing room, so it worked out great.  This is a crowded mooring field.  Every mooring had at least one boat on it, sometimes 2 or 3 rafted up and shared a mooring ball.  That afternoon we dinghied to shore and walked the short mile straight across the peninsula for some playtime on the beach.  It was a little chilly as the sun was headed down, but the kids always have fun playing in the sand.  David wished we had brought the stroller.  Next time.

On Christmas Eve we decided to take the bikes and ride out to a few stores that morning.  It was an eventful morning.  To get the bikes unloaded we needed to either move the boat over to the fuel dock to do unload them, or load them into the dingy and ferry them across.  We have 3 motor assisted bikes and 2 bike trailers.  It would have been a few nervous dinghy trips hoping nothing fell in.  We usually only like to put 1 bike in the dinghy as we worry about the pedals poking the inflatable tubes.  So we opted to take the entire boat up to the fuel dock.  Well, david decided the easiest thing to do was to drop our line that we had running thru the mooring and leave it 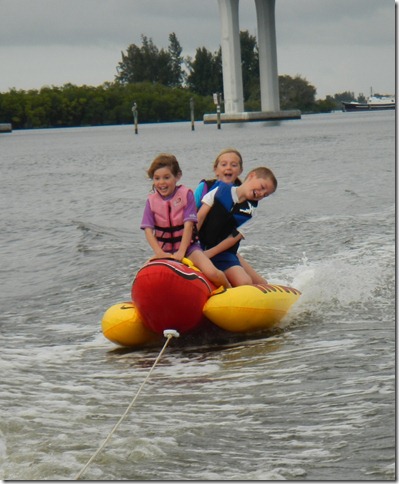 in the water to make it easier for pick up when we came back to our mooring.  Then he proceeded to drive right over the line on his way to the fuel dock.  As we went over the line, it of course disappeared—by wrapping around our stabilizer and prop.  Luckily our newly sharpened props cut right thru it, but it snagged the stabilizer good and made it hard to remove.  I didn’t want to make the situation worse by pointing out that he should have known better and gone around the mooring where we left our line, but… I couldn’t help myself.  We just finished repairs in Jacksonville to the cutlass bearing because we had snagged a few crabbing lines in our props and they tore up the bearing.  So into the water david went to see where the line was and how bad the damage.  He found nothing on the prop-whew.  But he cut out as much as he could from the stabilizer, but just could not get the rest out.  So we tied the line up to a cleat on deck, and decided we would worry about it later.  It wouldn’t cause any damage as it was.  During this time the boat is just sort of hanging out in the entrance channel of this marina/mooring field.  It’s Christmas eve morning, so no boats are going in or out, so we weren’t blocking anything, but people were watching us, I’m sure wondering what is going on.  And when we pulled up at the fuel dock, the dock hand mentioned he was a little worried about us, just sitting there.  We explained what happened, so it made sense, why are boat was just drifting slowly into the mangroves along the side of their channel.

After unloading the bikes and trailers, and filling up with water—might as well, we were expecting guests, we headed back to our mooring ball to re-tie the boat up.  Then we all loaded into the dinghy and off to shore.  We rode 5 miles to Target and Sam’s club.  Thank goodness for the motor on the bikes.  They are heavy and so are the kids, the motors help a lot—especially when we have to bike over big bridges and hills.  We grabbed the few things we needed at the store and headed back to the boat for an afternoon of fun.  We had bought the kids a “hot dog” tube, but hadn’t had warm weather or water to try it out in yet.  It was a pleasant afternoon and the water temp was 72 degrees.  the kids were excited to try out the hot dog. 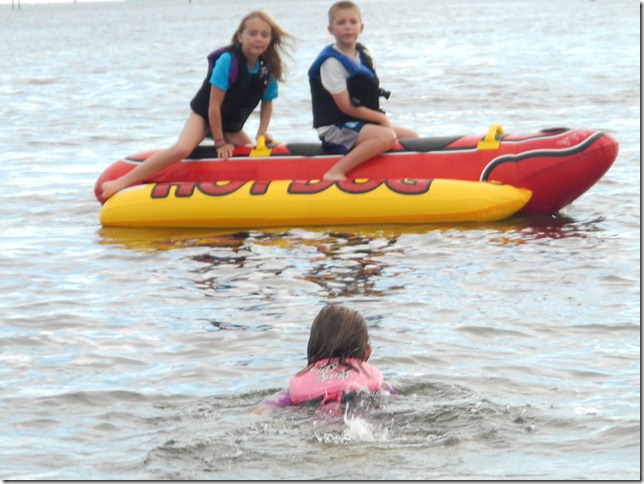 So off we went to flip them into the water.  Isabel was the first to fall in, but it took awhile of zigzagging and creative driving on david’s part to get them to fall off that hot dog.  Benjamin did not want to get on the hot dog—he hasn’t had any desire to get in the water at all, unlike the rest of the kids.  He seems to think there are sharks everywhere—but that is another story, but he came along as our flag waver when someone tipped off the tube. He brought his swim suit along (tucked in his life jacket, in case he changed his mind)  They all had a great time, but after a half hour they were ready to head back to the boat.  As we neared the boat, we had benjamin sit on the hot dog, just for a slow try out, to help him know it is a fun toy.  We then drove him slowly back to the boat on the hot dog. 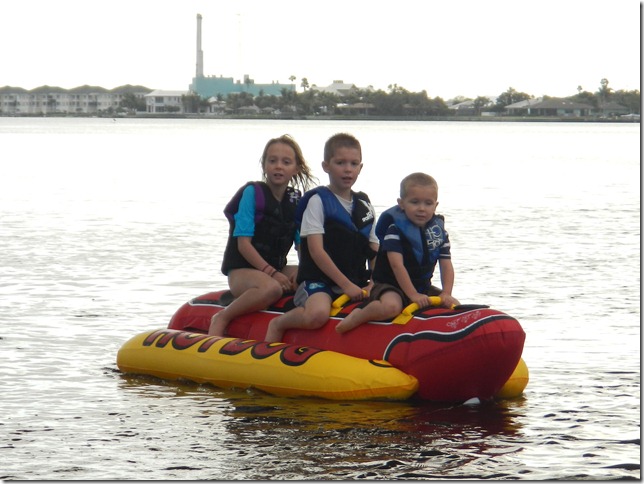