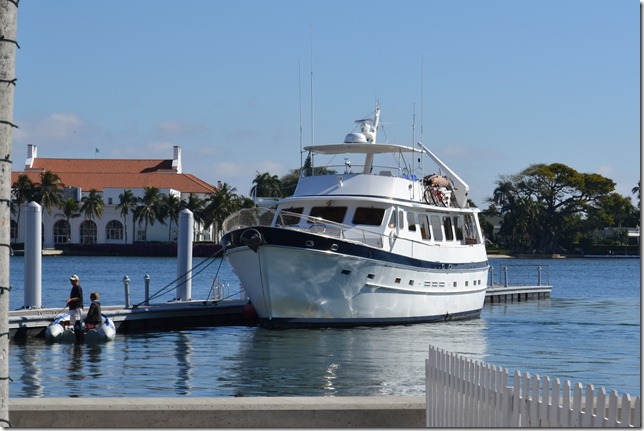 The weather was predicting cooler temps with wind.  So we planned a day on shore at downtown West Palm Beach.  We pulled up our anchor near Peanut Island and headed to the free city docks a couple miles south.  When we arrived we found the current was strong and not running in the direction we needed to tie of to the dock.  We could only tie up on one side of the dock because the other side had large concrete pilings alongside every 15 feet.  As we attempted to dock we were able to get a bow line attached, but just could not swing the stern in against the current. 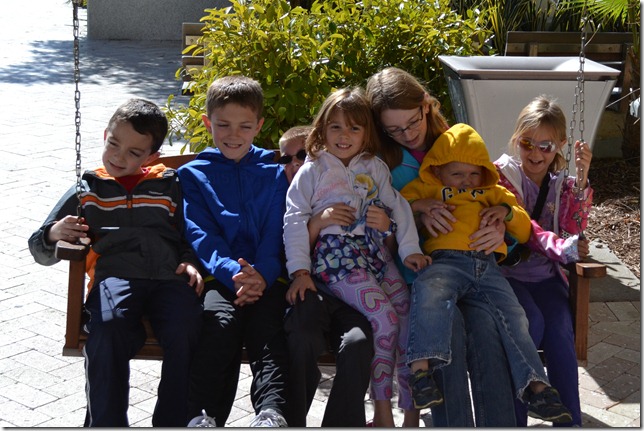 As we were struggling a guy came down the dock pushing a stroller offering to help.  He yelled over to us asking if the boat was “RCABIN”  and I yelled back “yes!”  I was trying to figure out how he knew who we were, when he clued me in… Last spring when we traveled through North Carolina we met up with the same power catamaran a couple different times at marinas.  We had chatted with them in the evenings, and sure enough, he had been on that cat with his father.  He was out for a walk with his twin toddlers when he saw us struggling to tie up and thought he’d come say hello and help.

He was a big help.  We were able to toss him a line (3 ropes tied together) and he then tied it to a cleat on the dock to help us swing out stern in.  After a few minutes of trying, the line snapped, and we were back at the beginning.

We had been trying to dock on our port side so we could use the crane to lower the scooter and maybe run a few errands further away.  I told David, it just wasn’t going to work for us to tie up port side.  So we agreed to switch to go bow in and tie up starboard side.  It was still difficult fighting the current, but we were at least able to get the boat parallel to the dock with several lines attached.  We then just had to use all our strength to little by little tighten each line pulling us closer and closer to the dock so we could get onto it. 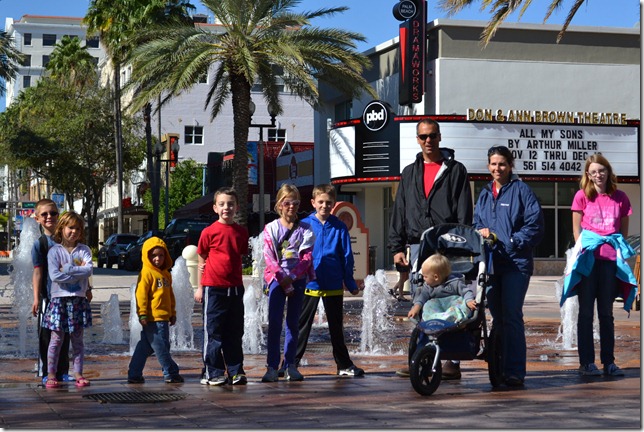 The irony is that once we were finally tied up, it was only a couple hours more till the current would switch on us and would be pushing us into the dock.  Once tied up securely we talked to one of the boats anchored nearby, they told us they had been there 2 weeks and had seen many boats try to leave when the current was pushing them in and had damaged their boat.  We had decided we would take a look at slack tide to see how hard it would be, and worse case scenario—wait 6 hours till current switch back to pushing us off the dock.  It would be dark then, but we could leave without hurting the boat.  The free city dock does not allow boats to dock overnight.  Next door is an upscale marina that only docks boats with a minimum length of 55 feet.  While we meet that criteria, the mega yachts they have docked there were neat to look at, but would be intimidating to dock next to. Besides we enjoy anchoring out, even surrounded by city it, being anchored gives a peaceful setting. 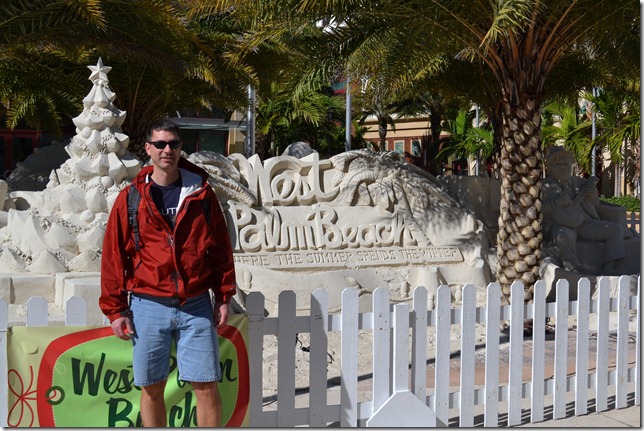 We enjoyed our day ashore.  We walked all over the downtown area and viewed sand sculptures representing 10 different Florida cities. That afternoon the guy who helped us earlier, that we knew from the spring, happened back by to see how our day was going. He said he had talked with his dad and they wanted to take us out to dinner tonight.  So we set up a time to meet up later that evening.

After dinner, the current had switched so it was time for us to leave and find a place to anchor for the night.  With the current helping us now, it was easy to let go of our lines and drift off the dock, turn and leave.  We headed back north no more than a mile and anchored out of the channel in 8 feet of water. 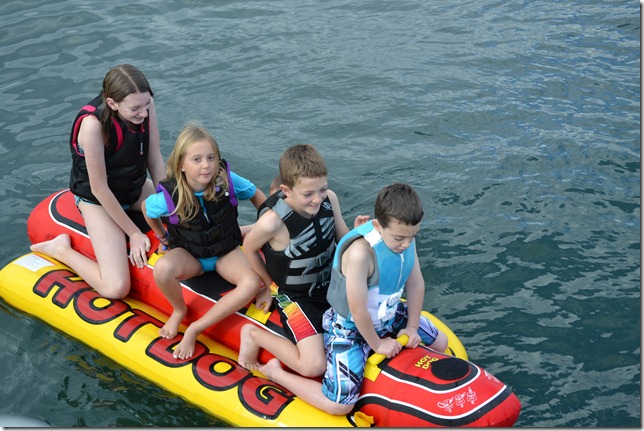 The next afternoon the kids wanted to go tubing on the hot dog again, so we spent some time doing that.  With the cooler air temp, they didn’t last long in the 73 degree water.  But they had a good time, until the last time they were thrown from the boat, and Mirelle announced “it wasn’t worth it!” 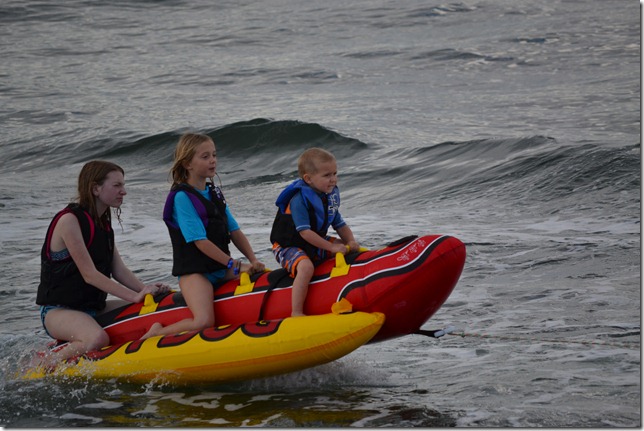 For a few minutes we talked Benjamin into going for a ride on the hot dog and he loved it.  He has been very apprehensive to ride it, but he had fun this time.  We even got him to jump in the water about 6 feet away from the boat to swim to the swim ladder. 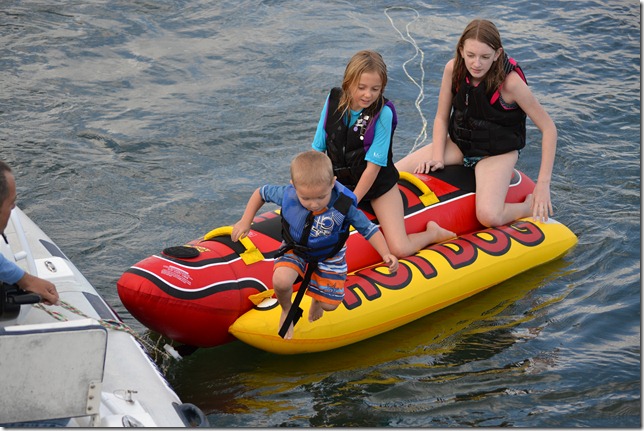 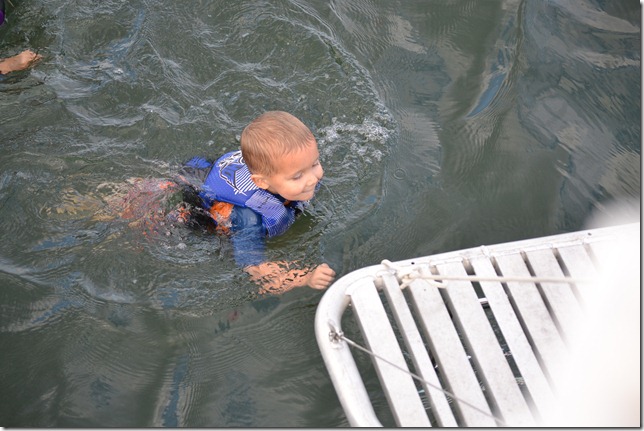 Sawyer was the last rider, everyone else was too cold, so no one wanted to go with him.  He hunched over and hung on tight.  We went over wakes and waves trying to throw him from the hotdog, but it was hard to do, he just hung on there good. 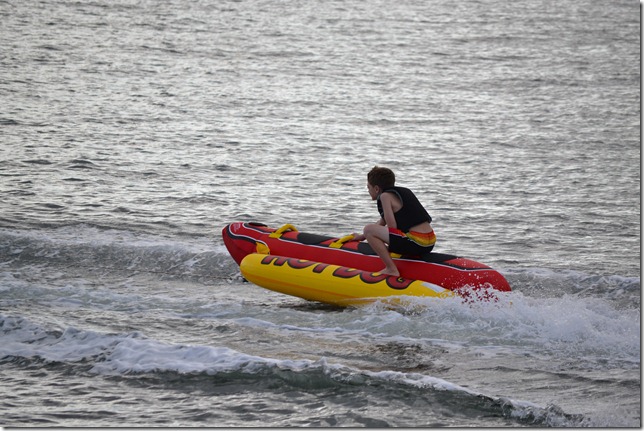